REVIEW: Signs of the Sojourner

“Well, I guess you didn’t want to hear about your mom” No I do! My hand is just filled with fatigue =,(

Signs of the Sojourner puts you in the shoes of a silent protagonist, with a cat-like hood, that lives in a world where traveling between towns isn’t the easiest. As a kid, your mother was a part of a traveling caravan group that traveled around to the surrounding towns where she talked with various citizens and receive various items or food that represented their town. Then, once she arrives back home to Bartow, she sells them in her store to other Bartow citizens or anyone from other towns that decided to drop by. Since you were a kid, you had to stay in Bartow, but you’re best friend Elias kept you company. Not to mention hearing your mother’s stories about the various places she visited that ultimately fueled you and Elias to dream about traveling with the caravan when you’re older.

However, the future doesn’t always go the way you expect it to. After your mother’s death, you inherit her store and all the responsibilities that comes with it. Though, there’s even more bad news. If you don’t bring your mother’s store back to it’s former glory, the leader of the caravan, Nadine, is going to take Bartow off their route. After all, if Bartow has nothing to contribute, why stop there? Given only 5 months to turn the shop around, you leave Elias and Bartow behind in hopes that your conversation skills is enough to save it. 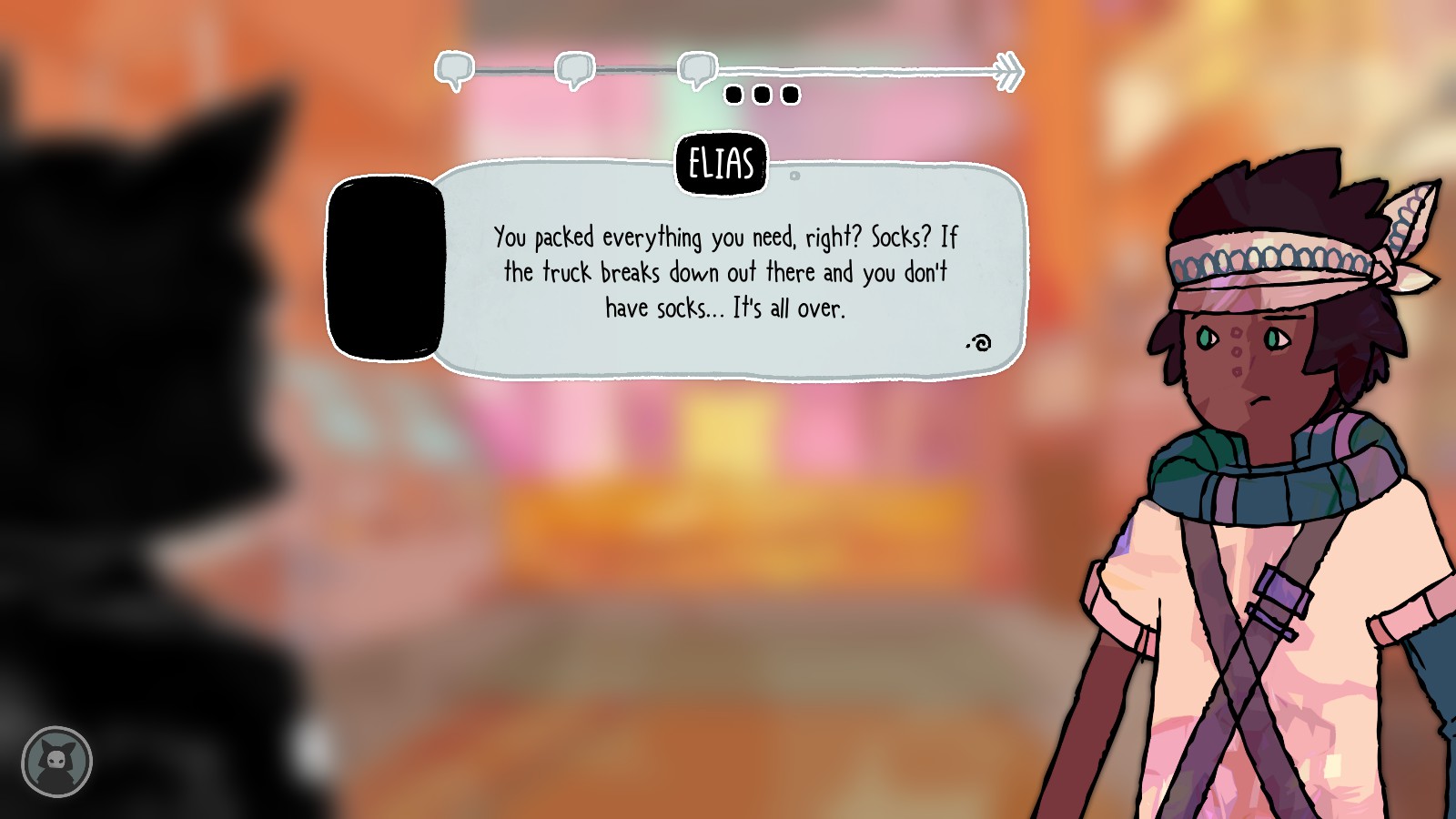 Signs of the Sojourner is all about having conversations, which is where the card aspects come in. Instead of picking dialogue from multiple choices, it’s based on what cards you play. Each card has a symbol on the left and right side that’s supposed to represent different ways of speaking, like empathetic or diplomatic. When you first arrive at a town, you’ll see who you’re able to talk to along with a short description on what they’re doing and what symbols they primarily have before starting a conversation. From there, a board will pop up and you and the character you’re talking to draws five cards. To connect with them, you have to successfully chain match cards with them. However, if you or them plays a card that doesn’t match, it’s a disconnect. How many cards you have to chain, and how many successful chains you have to do or how many unsuccessful ones you have left before they end the conversation depends on who you’re talking to. Successfully connecting results in you learning more about them, the area around you, and perhaps something about your mom; while disconnecting distracts them as you did/said something wrong and ultimately will cause them to shut down the conversation if you disconnect too many times. After each conversation, you have to learn a new card you saw your conversation partner using to replace one already in your 10 card deck. 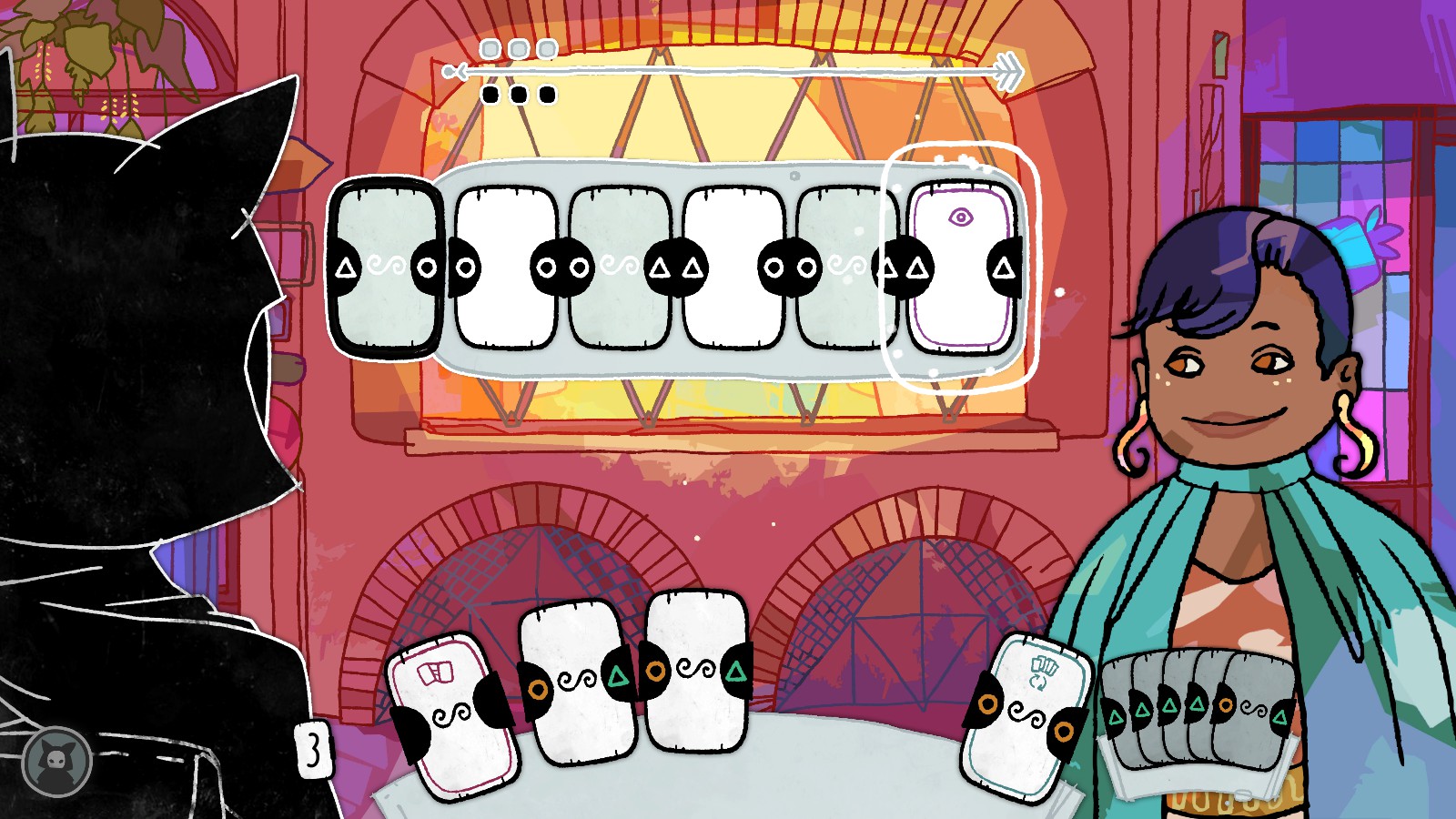 To spice it up, card abilities are introduced. One that you’ll always have is Accord, which is activated when four or more of the same symbols are connecting in a row and in response a sort of shield appears on the last card played to protect your progress. So instead of a mismatch causing a disconnect, it won’t. The others are connected to the cards themselves and can be pretty helpful when you’re in a pinch. Like Clarify (lets you insert the card in anywhere as long as it matches), Observe (lets you see the other character’s current hand), and Prepare (which lets you choose what card you draw next). 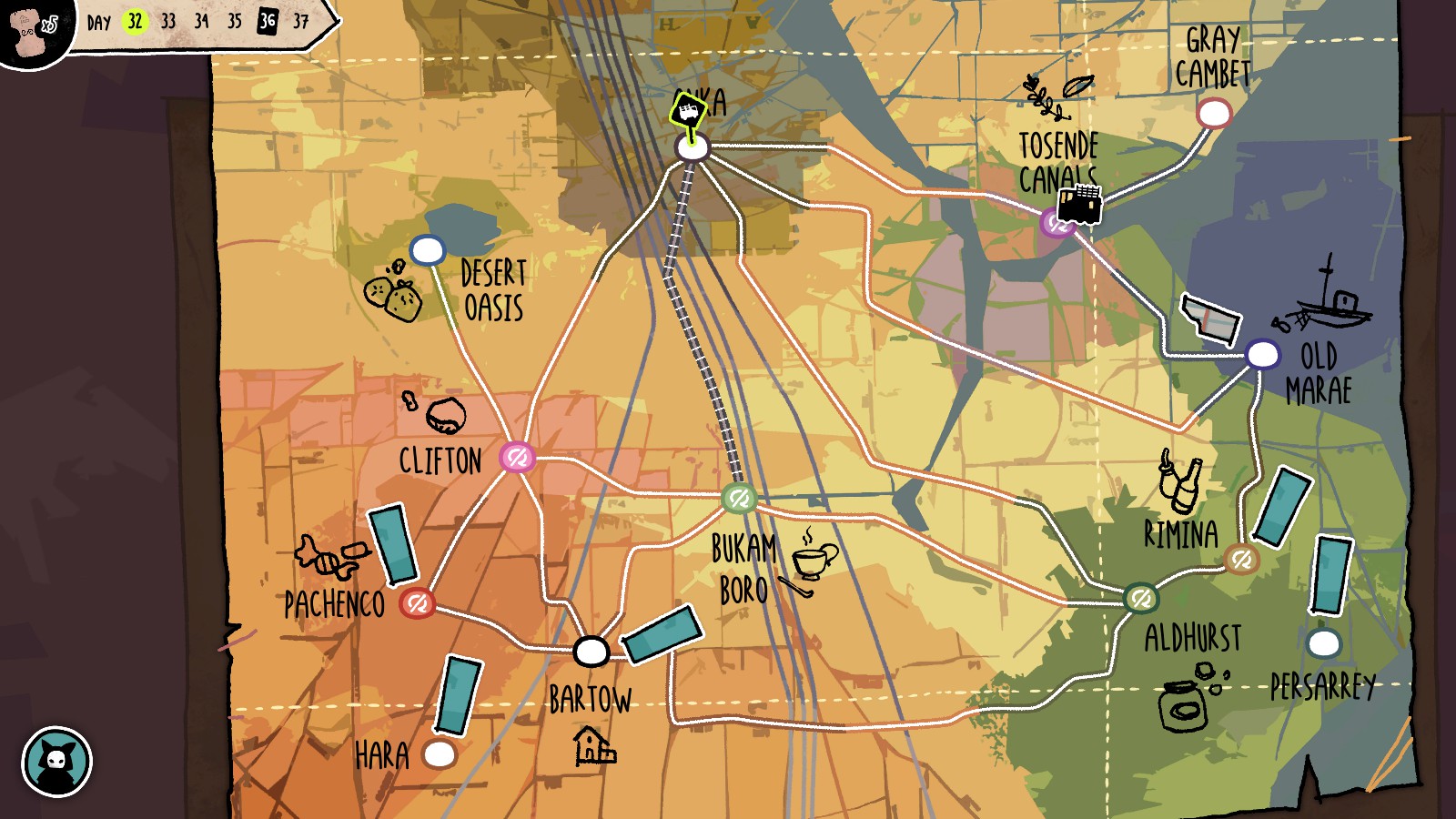 Making sure your deck lets you connect with others isn’t the only thing you have to worry about. As your map gets filled out more as you visit more areas, you don’t have to follow the caravan’s usual route if you don’t want to. There are a couple events that a town will host that you won’t be able to see if you follow the caravan and there are towns that aren’t on the route. Occasionally as you’re traveling between towns, you’ll also come across mystery events where you’re given a choice to go along with it, or continue on. If you do, it’ll grant you a bonus like putting a temporary Accord or an ability on a card. Though, you can’t get out of it if you don’t want it. 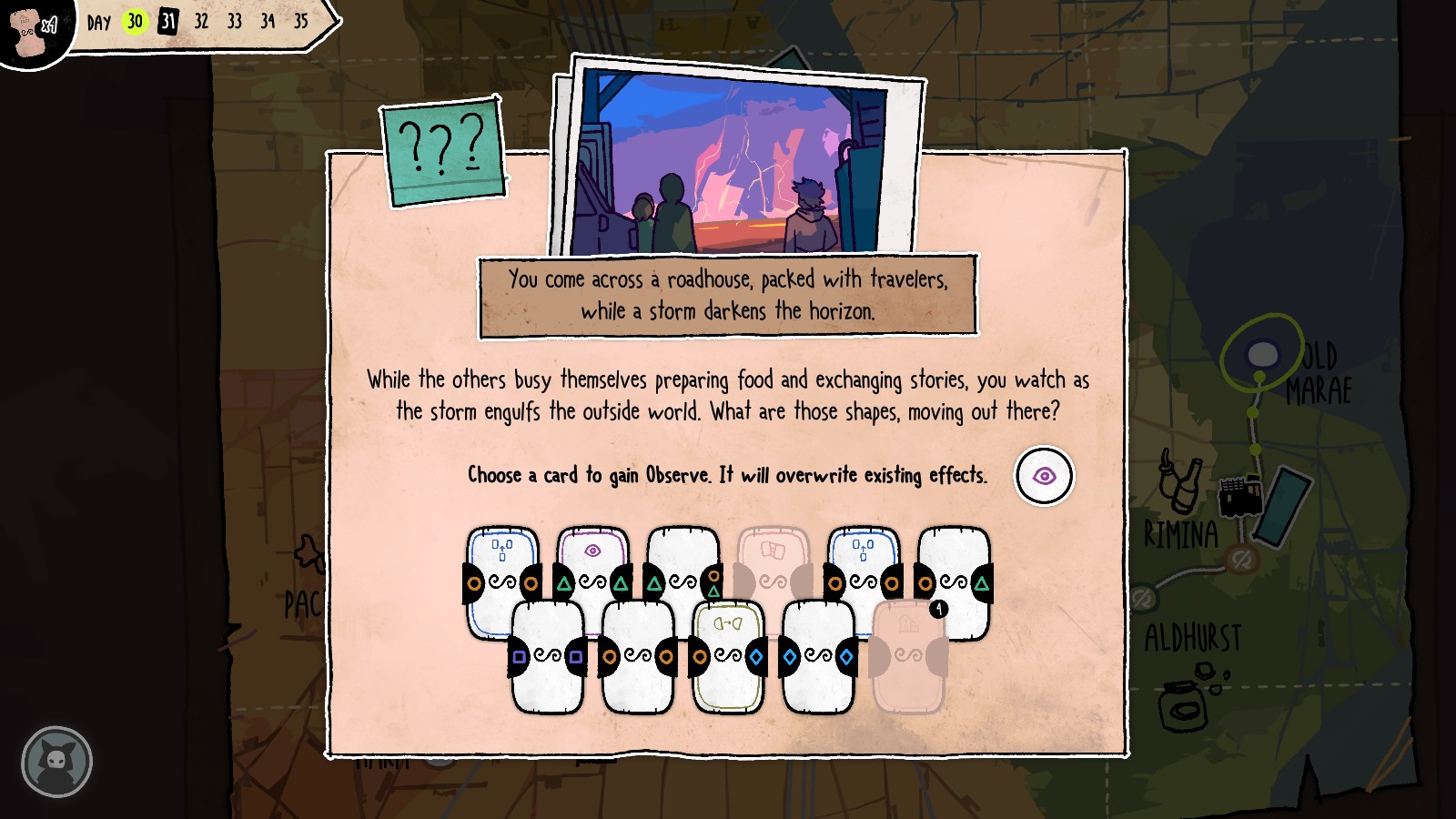 Every seven days, you’re also given a fatigue card. Fatigue cards basically clog up your deck with a card that can’t match with anything and makes it harder for you to have successful connections. These cards won’t only make you fail the current conversation, but the next (which, is also true if you play a card with a right symbol that they don’t have). You can be extremely unlucky and just have a hand full of fatigue as the max is 10. The only way you can get rid of them is by returning home and unpacking, conversing with Thunder the dog (though, you can be unlucky and have Thunder appear at an early town), or the rare chance that you get an opportunity on the road.

Signs of the Sojourner encourages you to play multiple playthroughs as you won’t be able to connect with everyone and get all the information you’d want. With how this game is designed, it theoretically has limitless replayability. Not only will you not be able to connect with the same people or be able to connect with characters you weren’t able to before due to having a different deck, but certain story elements do get changed around. Like early on, I had one of my items stolen from me, but in my second playthrough, the shop owner was stolen from. I also heard about new areas and got access to new routes that I didn’t know about in my first playthrough. There are also multiple endings, with each ending having different variations. Of course, this does mean that you’ll be facing the same dialogue most of the time and it can get frustrating if you’re just getting essentially the same ending. 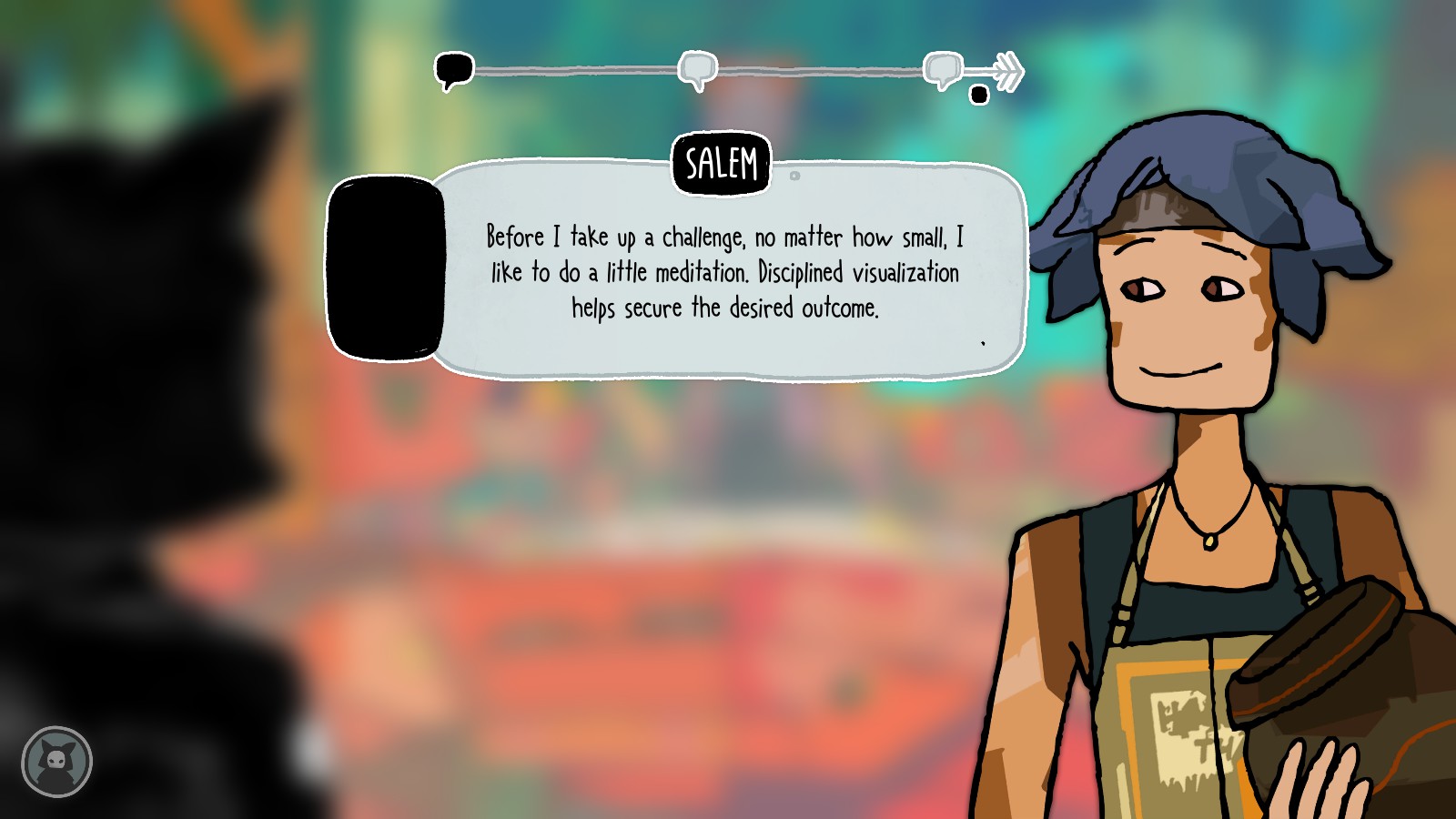 There are some aspects that I didn’t like and probably kept me from enjoying it as much. First of all, I wish you weren’t forced to replace an old card with a new one. I see the thought process as it pushes players to take on cards and change up their deck when they probably wouldn’t have, but at the same time, not having a deck that’s not prepared for connecting with certain people is enough. Often times, I did replace a card with the same card to try and skirt around it. Though later on, it does feel a tad punishing once you have cards with abilities as it makes you downgrade a card. I know you can just skip these conversations, but the story is tied to the characters and all of them are just a delight to talk to. 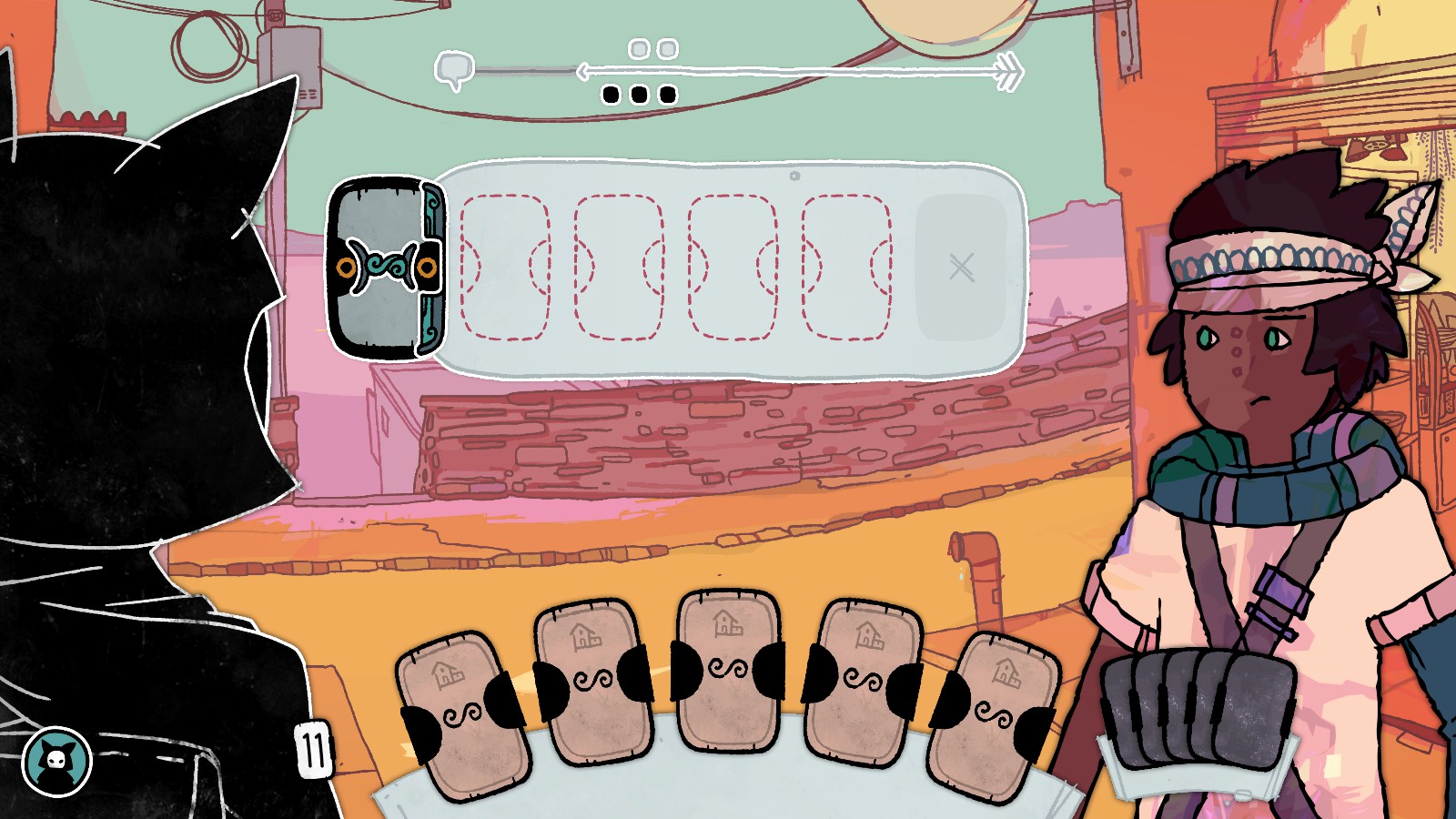 While I do like what the fatigue card represents, I certainly had times irl where I placed a fatigue card, but it’s not fun to play around. I’m fine with not connecting with characters due to having a poor deck for that area, and not drawing the one symbol you need (though most times, it’s already on the board), but not when I failed due to having fatigue cards in my deck. Even worse is when you failed not just once, but twice in a row because you had to play a fatigue card.

On that note, there seems to be a bug where the character you’re talking to won’t play a matching card on rare occasions. I know this happened to me at least once as I was able to see that they had cards with a circle on the left, so I played a card with a circle on the right, but they mismatched with me instead.

Lastly, the card aspect weirdly works against the game in a way. It represents conversations well enough, but it pretty much bars you from information or quest items with the dialogue suggesting that your character doesn’t care. Like no, I want to know more about my mother, I want to get you what you want Elias, but I just couldn’t successfully connect whether it was due to having a lot of fatigue in my hand or just not having the needed symbols. I know I’m not supposed to really be bothered, as the game does make a point to tell you that you’re not going to be able to connect with everyone, but I didn’t want to miss out not knowing if I’ll ever be able to successfully connect with them in future playthroughs. 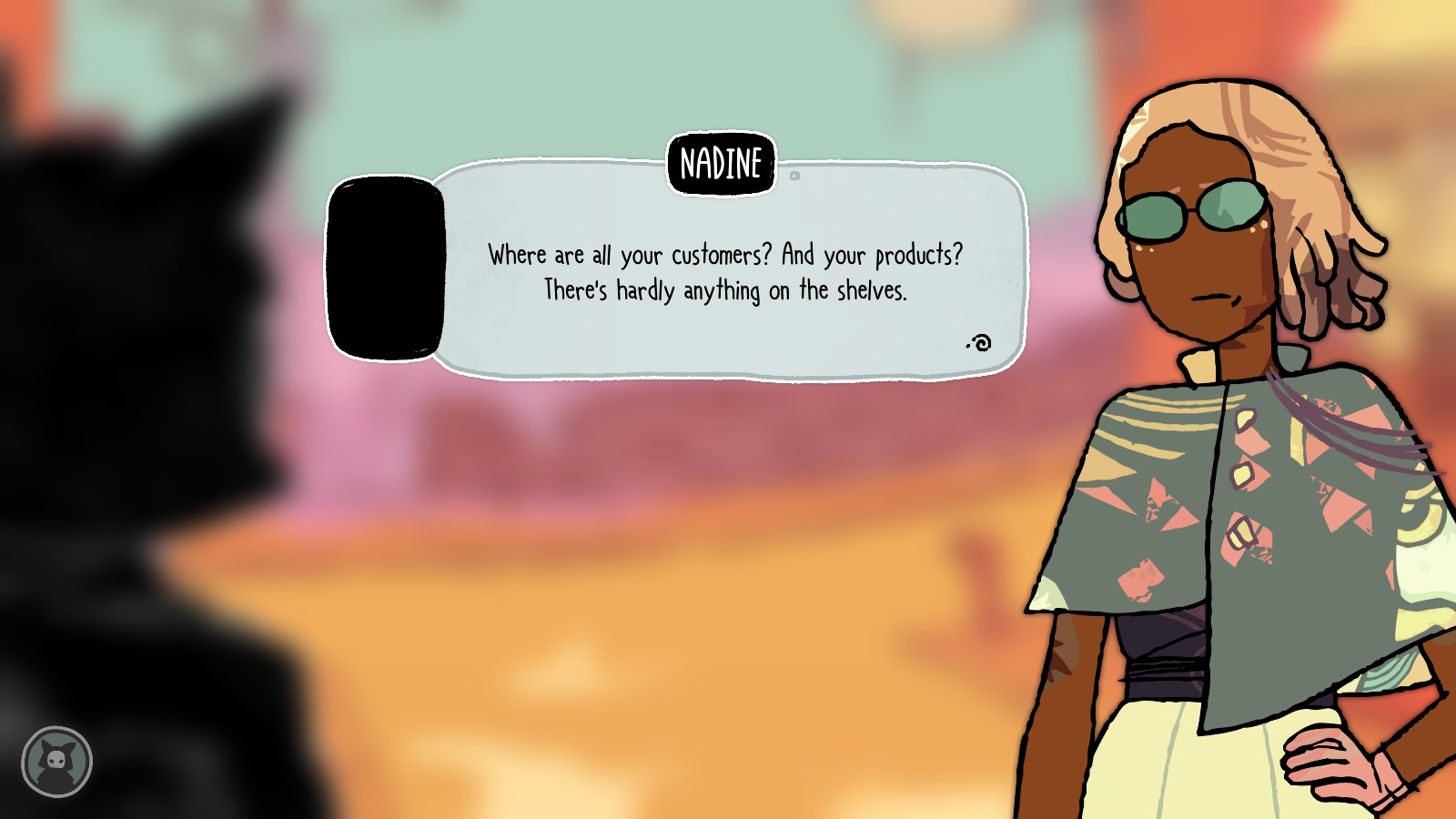 Flat out, if you’re looking for weird and unique card game that isn’t obviously somewhat inspired by Slay the Spire, Signs of the Sojourner is going to appeal to you. I certainly knew this was a weird card game, as I did get the chance to play the demo last year, and I’m still in the middle ground after playing the full release. While I did like how conversations were represented by a card game, enjoyed talking to the various characters, listening the music that represents each town well, and the wonderful art style, some aspects does have a chance at bringing the experience down.