The Blind Prophet follows Bartholomeus (Bart for short) who is an apostle sent to complete a divine mission. In this world, corruption is set into motion by demons that decided to hide themselves among humans and mess with their morals for their own amusement. Humans have no idea this happens and even if they do notice the signs, it’s already too late. That’s where the apostles come in. Every so often, when demon corruption is at its worst, an apostle is woken up and sent to help humanity. Luckily, or unluckily considering what the future holds, Bart was next in line and is sent to a small port town named Rotbork. 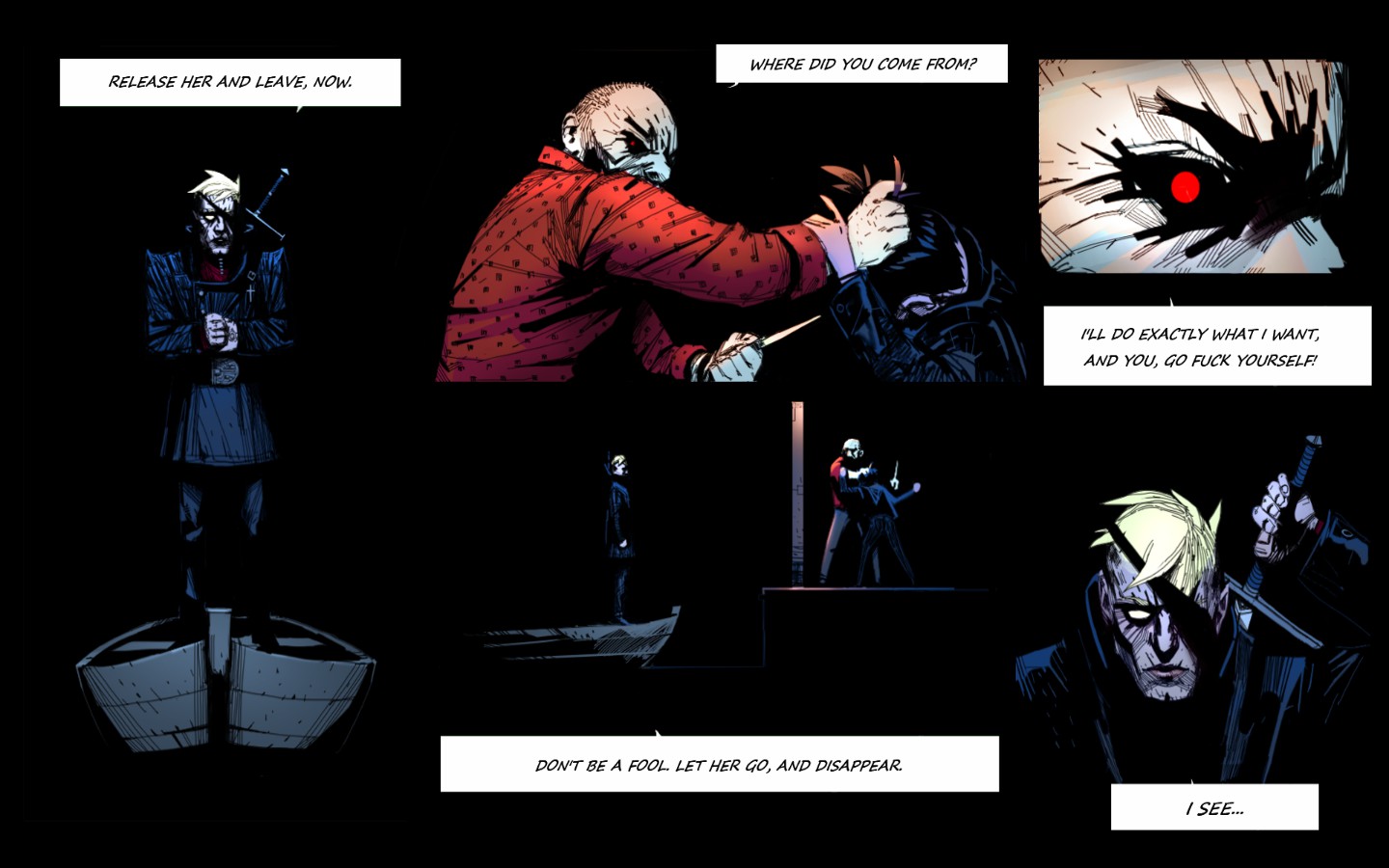 Despite Rotbork being a small town that is far from what it used to be in its glory days, that doesn’t mean that only one demon decided to make themselves comfortable here. In fact, there are actually several of them roaming around, seemingly making every corner of Rotbork corrupted with no area spared. In fact, right when Bart arrives a young woman was about to be the victim of sexual violence if it wasn’t for Bart’s amazing timing and slicing the attacker’s hand off. After helping the young woman, or Vic as Bart will soon learn and get help from, he follows the attacker to find out where the source of his corruption came from. However, Rotbork’s corruption is more advantaged than he initially thought and there are hints that a mysterious mastermind is getting all these demons to work together for the first time. 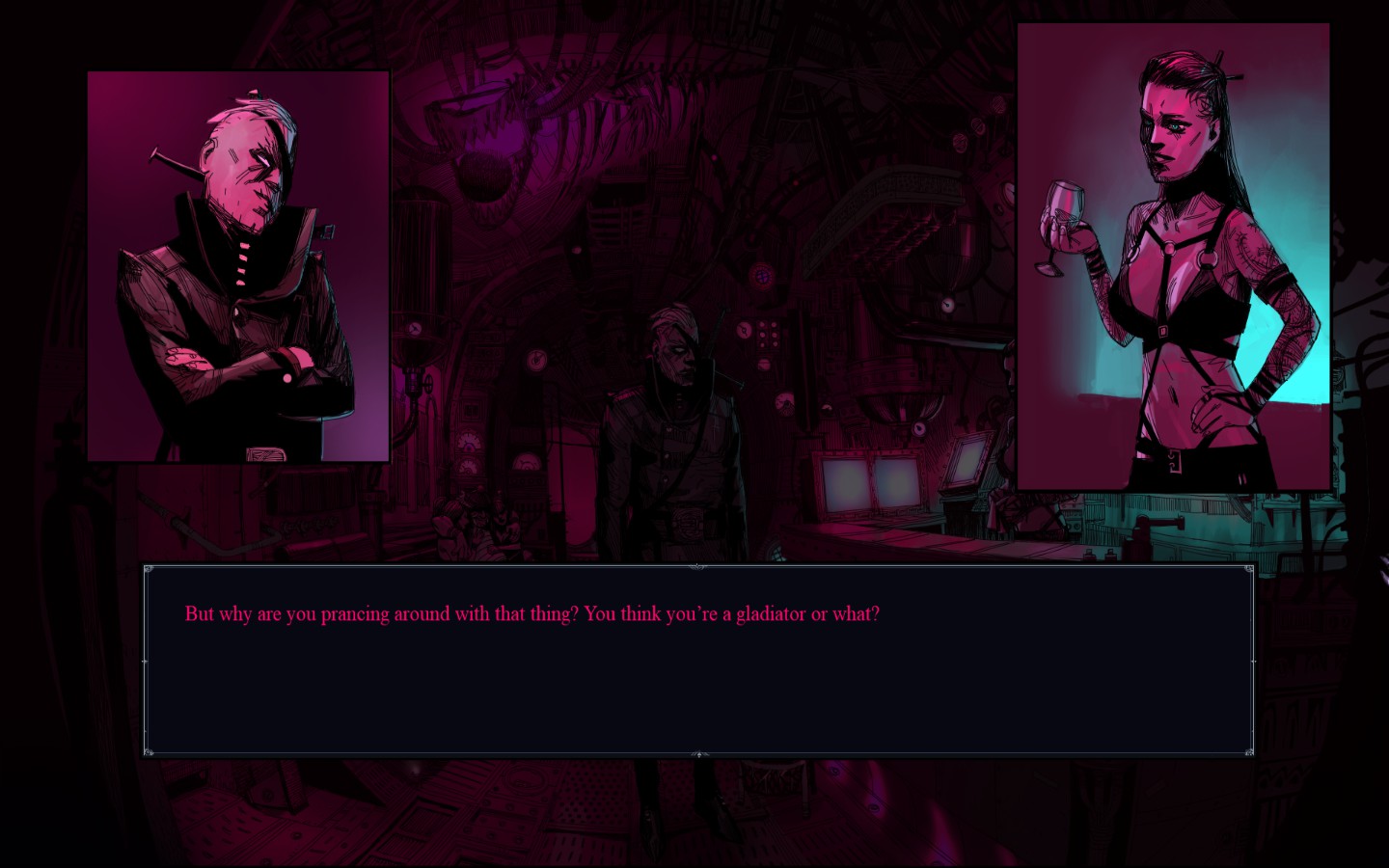 As The Blind Prophet is a point and click adventure, you’ll be interacting with objects, moving through each area, and solving puzzles with a click of your mouse. To help players tell what is interactable or not, Bart has an ability called Stalker’s Eye. Activating Stalker’s Eye will detect objects you can interact with and place a red dot on them as well as detecting demonic marks (though I only noticed this being helpful during the beginning). Stalker’s Eye will also show you the points that will cause Bart to move to another area if you’re not sure. Though, Rotbork is a little bit confusing to navigate even with a map handy at first. Once you know how each area connects, it makes more sense.

Puzzle-wise, I’d say that this is beginner-friendly as a lot of them are pretty easy to solve and some of them are reflex-based. There was really only two puzzles that I had no idea what the solution could be and I only got past it by being lucky. One of them pops up early in Act 1 and after doing some quick research, it was mainly because it was Christian symbolism which I’m not good at. Thankfully, this is the only time the game relies on the player knowing Christian symbolism and the puzzle does shuffle around every time you have an incorrect answer. 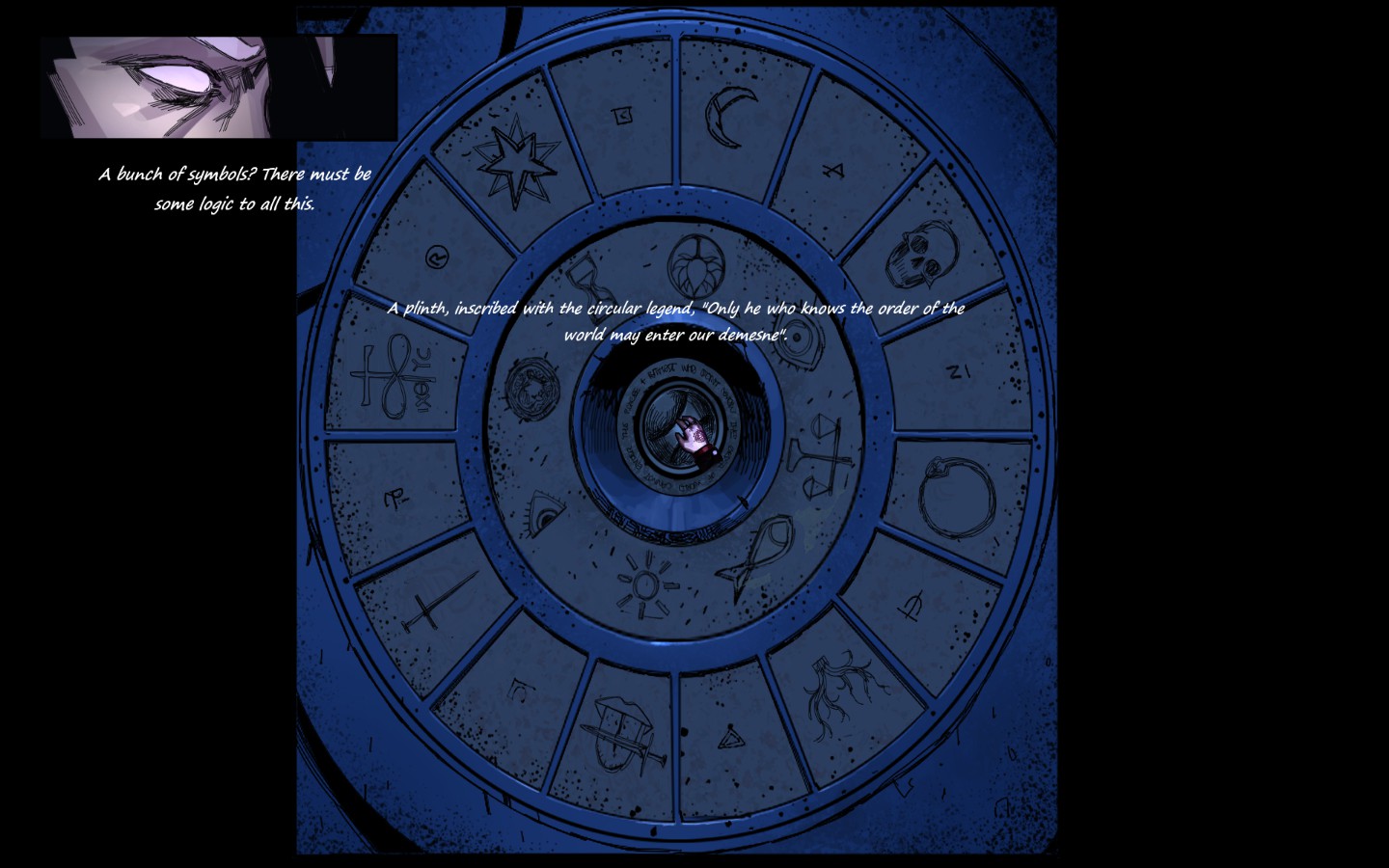 The only trouble you’ll probably have is remembering that you can’t pick anything up without Bart having a reason to. I’m kind of iffy on this aspect as it does make sense that Bart won’t pick everything up, but there are obvious objects that would be helpful in the future. In addition, Bart won’t do certain interactions unless you meet the requirement. This isn’t too bad as it’s only noticeable in the prologue, but it did seem weird to me that Bart would go out of his way to confirm which room his target is in (thus set the player out to solve a puzzle) when he has a way to confirm with the room key he picked up or he could simply knock on the doors.

Once you’re tasked with completing a puzzle, you’ll also be locked into it. You won’t be able to back out of the screen or leave to go into another area until you solve it. I personally like this feature as it does help communicate that yes, what you need to solve this puzzle is in this area. Eliminating player frustration when they think the needed item is in another area, especially when some are timed.

However, The Blind Prophet isn’t without its faults. The English translation does falter here and there with spelling and grammar being off. There is even a puzzle where the text wasn’t translated to English and later on some text on a computer (which leads to a “connect these pieces together” puzzle). Luckily, the former wasn’t too hard to figure out by just playing with it and the latter didn’t matter too much since you really only needed to find a name (and even then the vast majority of it was translated) and you could tell what the French text meant by context.

The ending also has me torn on it being unsatisfying as it does leave some things unresolved and ends abruptly (feeling like there was more) but at the same time it makes sense considering the character you play. There is a chance this was intentional or there really wasn’t an ending that would have felt satisfying (I honestly don’t think it would have been satisfying in any case if this end was planned all along). 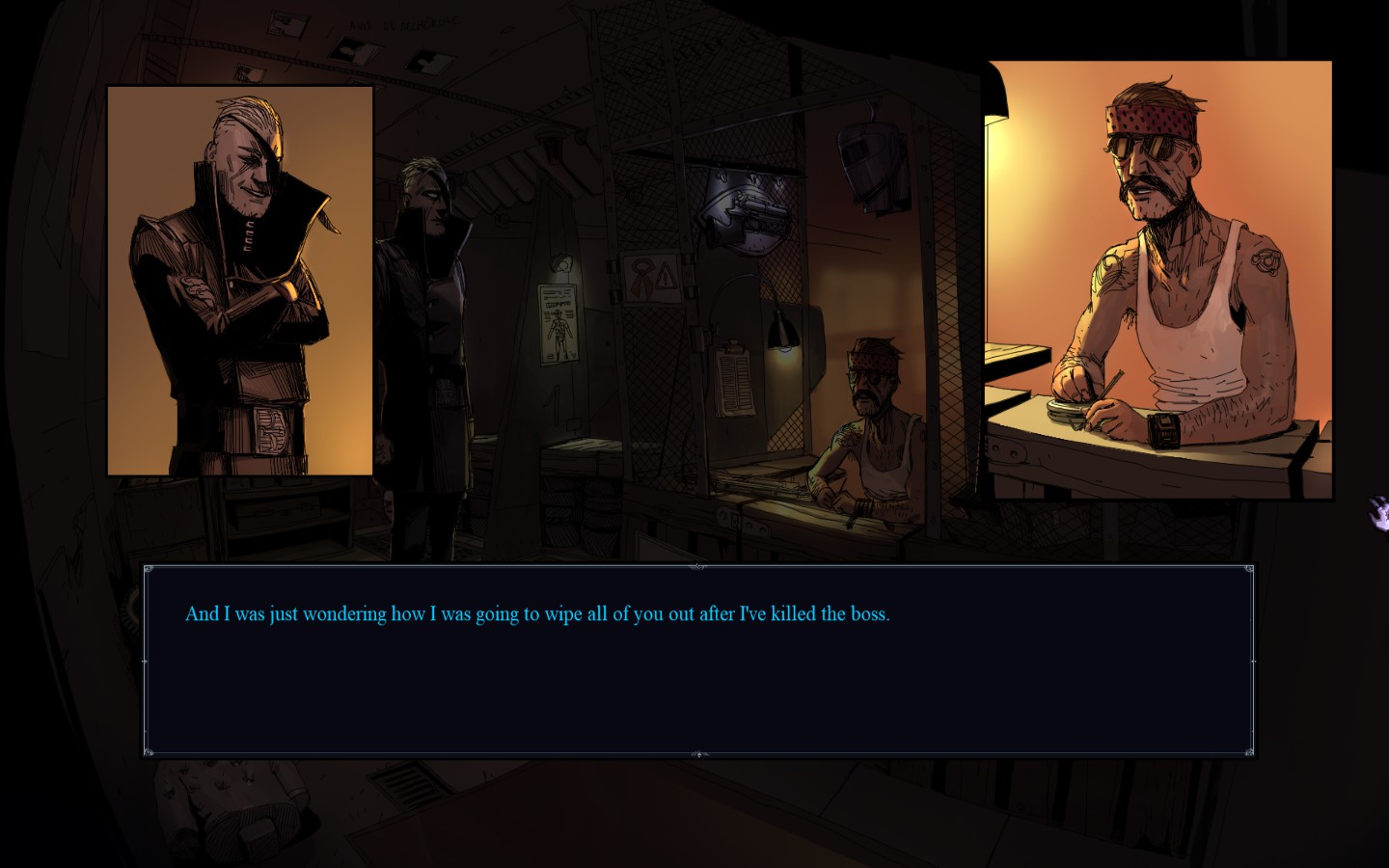 Lastly, I wished the save system had a manual save option/save points that you can continue off from. From what I could tell, the game autosaves after conversations, picking up objects, and after puzzle. This normally is fine since the game is linear and players would want to continue off from where they left off, but it isn’t when encountering a bug. The only bug I encountered was one that would dull the screen for dialogue, but the dialogue wouldn’t pop up. The only way to fix it was to exit out, but that also skipped the dialogue I needed to read once I loaded back in. There is also dialogue options at the very end that you can only choose one before the story continues. There’s a chance that all of them say basically the same thing, but either way, you’d have to replay the whole game to see what the other choices led to.

That said, my favorite aspect of The Blind Prophet was the art direction. I absolutely loved that it took a dark, comic book art direction and it fits well with the dark themes the game had. The cutscenes involve each panel being revealed and each area is beautifully drawn. During dialogues, each character will have their own portrait that cycles through multiple reactions and some actions Bart has, like jumping over a wall, will show a panel of Bart doing just that. There were also some interesting choices made in some cutscenes that I loved, one of which wouldn’t have been as effective if this was just a regular comic book, and the exaggerated faces were the best. The soundtrack was also great and helped with Rotbork’s atmosphere. 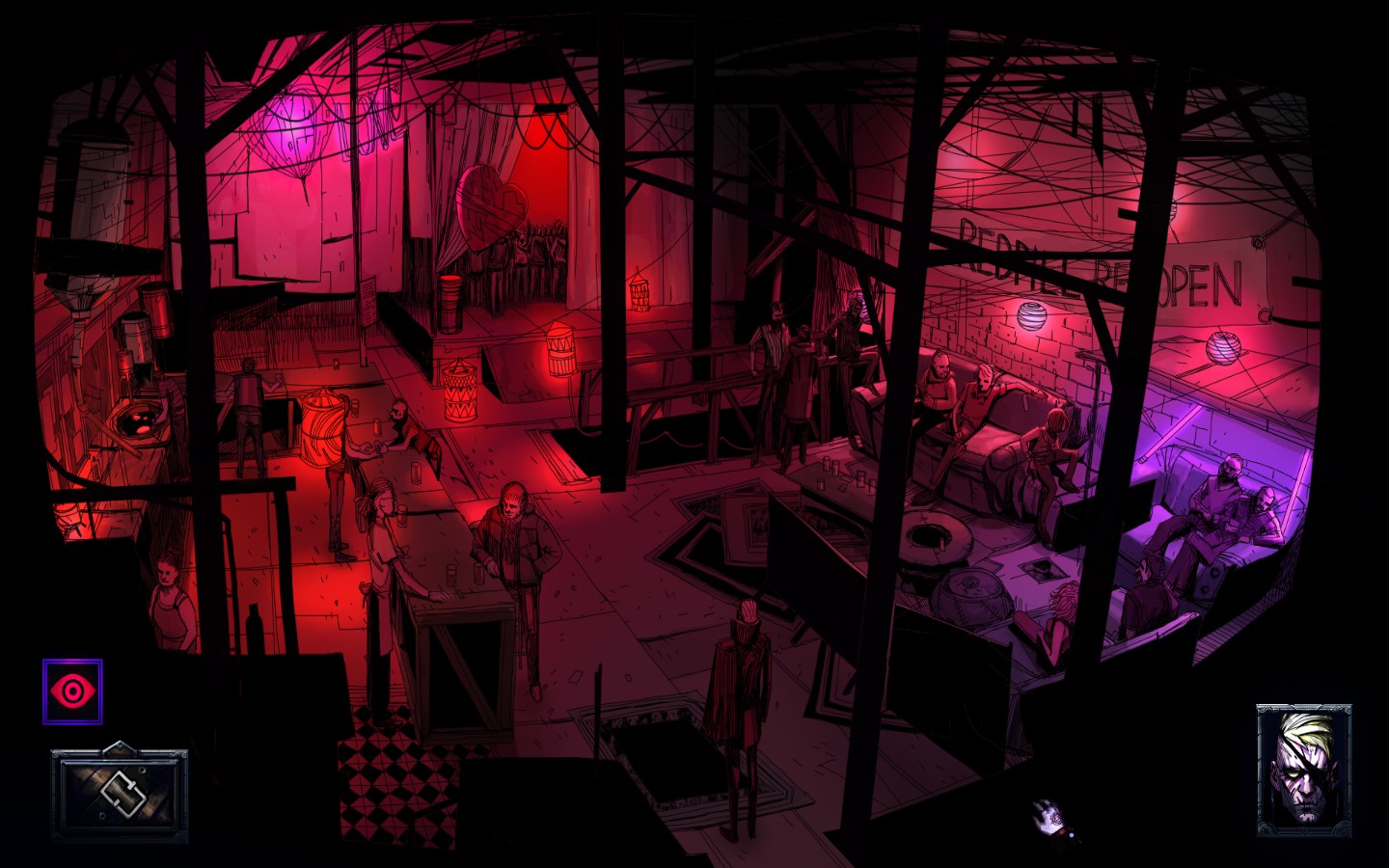 Overall, I did enjoy my time with The Blind Prophet. I loved the dark comic book direction, the soundtrack fits well with each area of Rotbork, I enjoyed my interactions with how the people of Rotbork bounced off of Bart, and I appreciate that the puzzles never felt illogical. However, the English translation does falter every so often, the autosave system is fine until you come across a bug (which granted will only affect the unlucky few), and the ending is unsatisfying. Though I do see the humor falling flat for some and the puzzles being way too easy for those looking for difficulty. If you’re someone that is interested in a story where you track down demons to rid their corruption from a small town and don’t mind its downfalls, yeah pick up The Blind Prophet. I would probably recommend waiting for a discount though.