Qix with boobies and a story. Well, sort of.

Mokoko is the latest adult-content game from independent developers, NAISU. When I saw that Mokoko had released I was a little surprised to find that I had all of their other boobie games on Steam already, though I’ve only played one of them as yet. 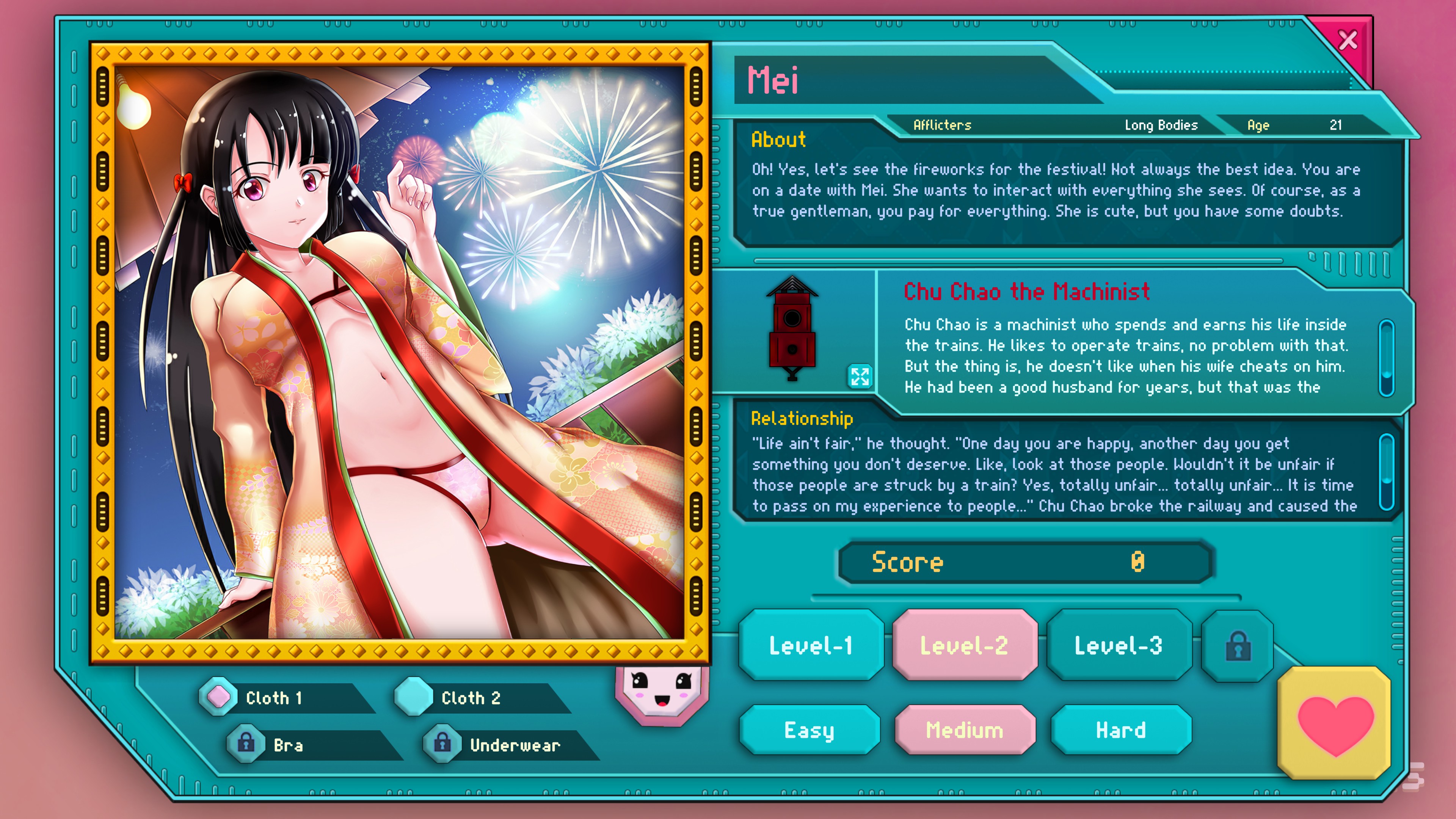 If you haven’t played Qix or any of its many impersonators, then you probably should. It’s a gaming classic and many of the games that have since been inspired by it have improved upon its basic gameplay immensely. Mokoko isn’t the first Qix-with-Boobies game that I’ve played, either, but probably Fortix 2 is the most original of Qix-derived games I’ve played.

Basic gameplay is very simple. Each level comprises a large square with a girl’s silhouette making up the background with a number of enemies that move according to set patterns and some crates moving about on top of the image. You begin on the bottom edge of the square. You can move freely about the edge of the square, dodging enemies and any shots coming for you.

Pressing the space bar and moving towards the inside of the square starts you drawing a line from your previous position out into the game area. As you move up, down, left, and right, you partition out a section of the game area with your line, and when you join it back to the edge again, it becomes permanent, revealing a portion of the image underneath, and blocking off that area to the enemies. You can join new lines onto areas you’ve captured; you don’t always have to return to the edge of the square. 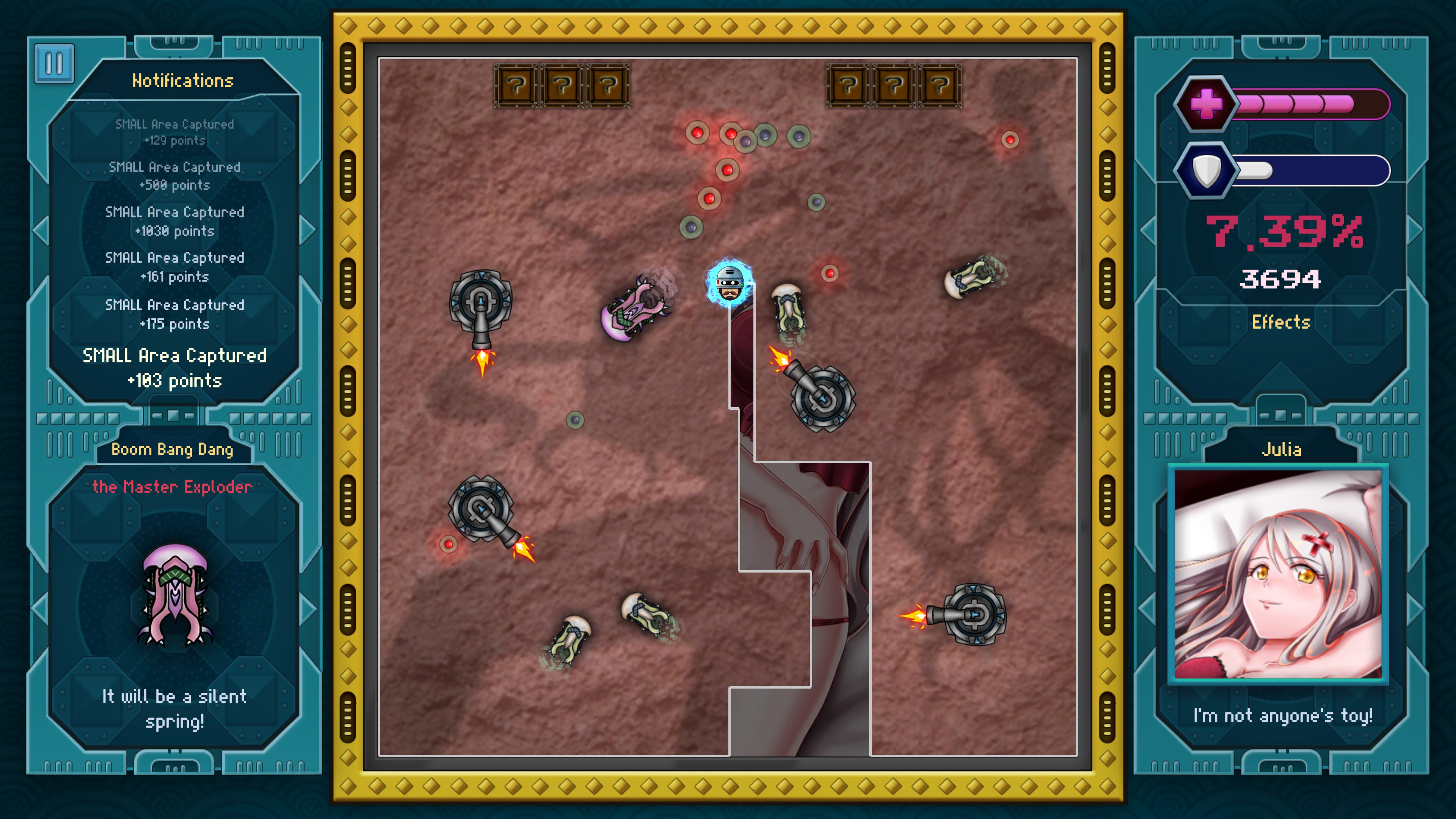 If you capture an enemy within your drawn region then you get a bonus and the enemy is destroyed. If you capture a crate then you may unlock a power-up and bonus points as well. Once you’ve captured a set percentage of the starting square, depending on your chosen difficulty, you win the level and move on to the next.

Mokoko’s main alterations to the standard Qix formula are similar to those of many other games, though the hard difficulty’s trapped crates can have some fun effects, and the enemies are far more varied than those in other Qix-derivatives I’ve played. Each level gives you a certain number of lives, and you also recharge a shield as you capture areas of the screen, though it only protects you from shots and enemies while you’re on a permanent edge; drawing a line still exposes you to almost certain death should your line be touched. 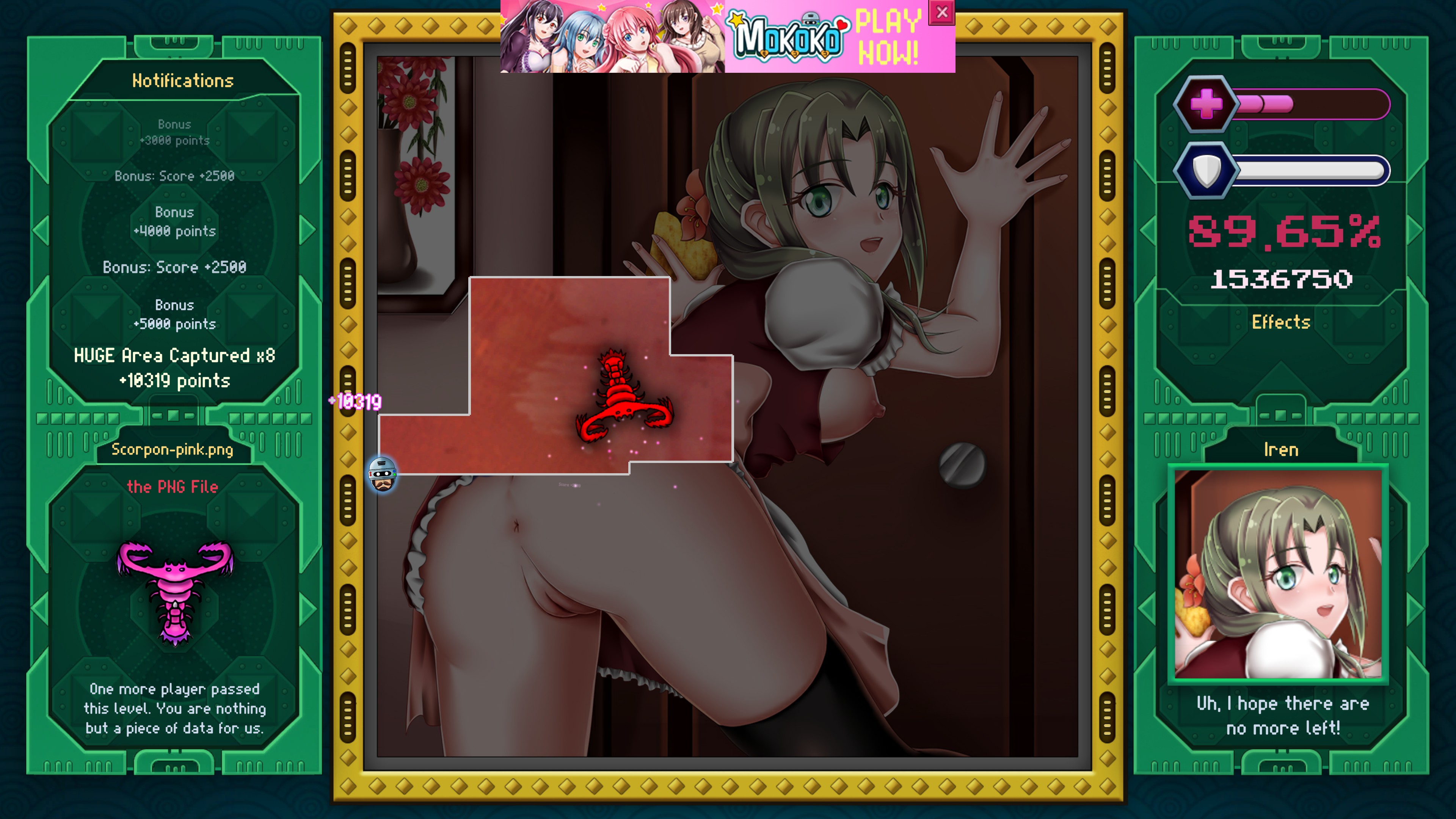 The variation in levels is good, too, with some really interesting and amusing levels — the mobile app, complete with ad banner, and the laggy online game level were the best in my opinion — but unfortunately once you’ve seen each one once or twice, the novelty begins to wear off.

Mokoko has only a single CG image with minor facial animation — three expressions — for each of the eight girls in the game’s story. Each one of those images is used on the pre-level story screens as well as for the background and portrait images on all three of the levels for that girl, so while you’ll play through 24 levels, you’ll only see eight images. The vanilla version downloaded from Steam has no nudity or adult content, but completing each level pops up a dialog saying that new clothes have been unlocked. 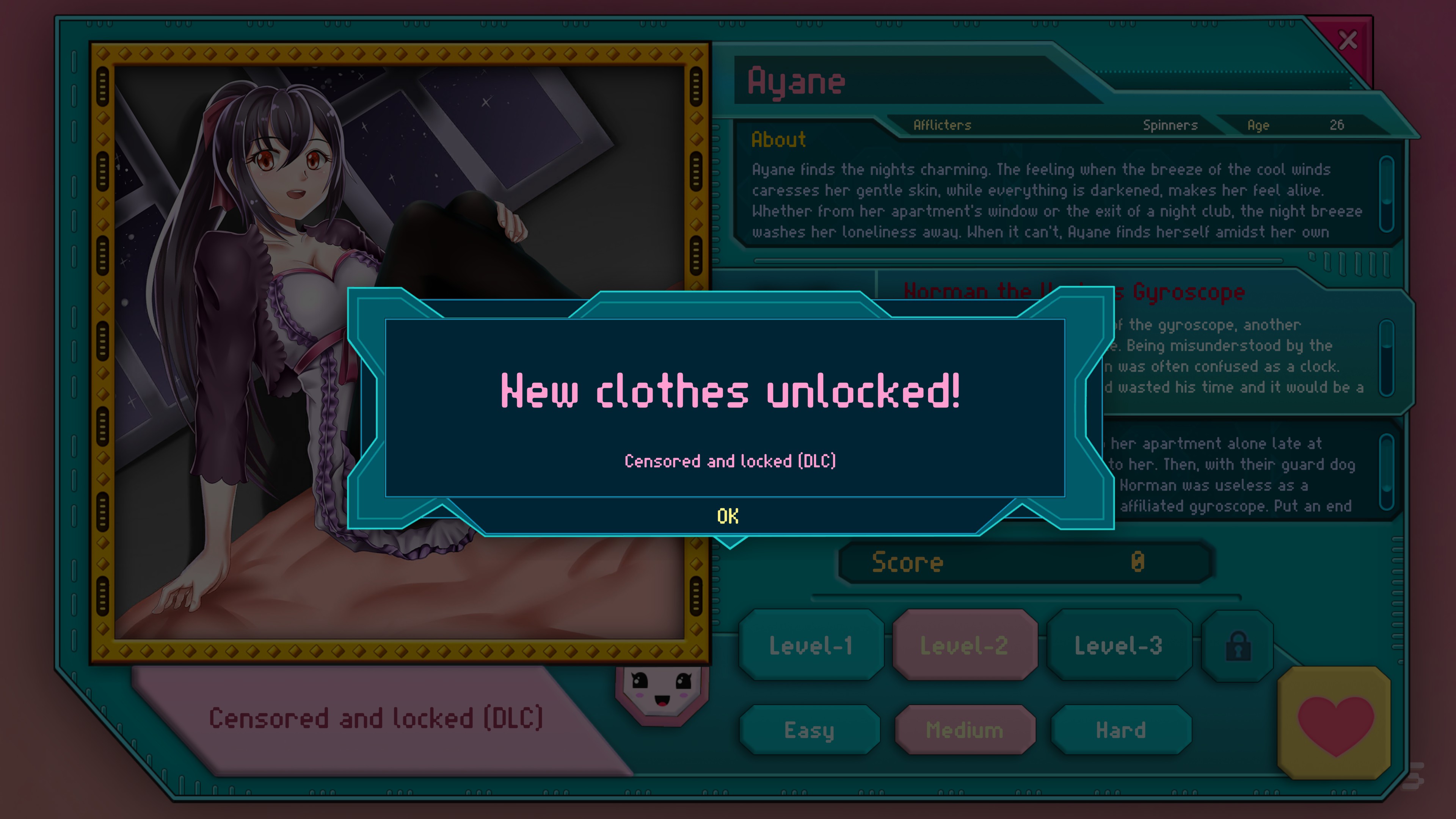 Downloading the free “Nudity Patch” DLC from the Steam store page adds four clothing options for each image, each of which can be toggled on or off: cloth 1, cloth 2, bra, and underwear, which correspond to the clothing unlocks gained through completing each level.

These clothing options only modify the single CG image, however, so you’re now left with a few (conceptually up to 16, from full nude through fully clothed, though you can’t tell the difference between some of these) versions of each image. 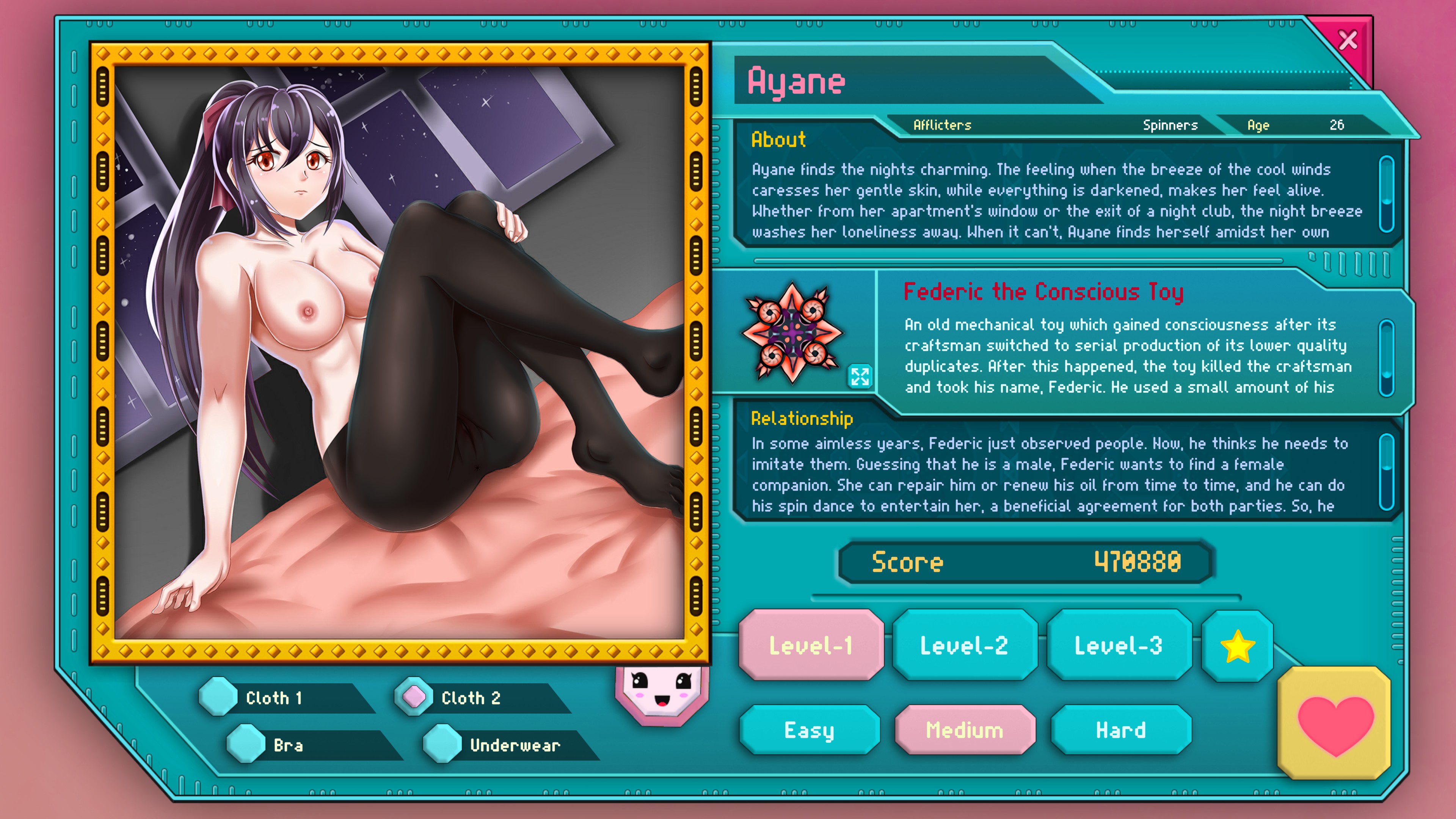 The images are nice enough, with most of the girls being quite attractive. They seem to be the work of a single artist and some of the “rude bits” look a little odd; the clothed and topless versions tend to look the best across the board. Next to the interesting enemies and fun levels, the amount and variation of CG content is really lacking, though; the game would be much more appealing if each level included a new image, rather than only one per girl.

The game seems to include an overriding story line that is revealed a paragraph at a time as you complete each girl’s section, as well as a completely unrelated story for each girl.

The overriding story is a reworded version of a joke I heard many years ago, but the punchline has been changed to make it a bit less punchy. I recognised it before the end, but it was still amusing to read it again anyway.

The girls’ stories are completely bonkers and seem to not even attempt to provide an excuse for the de-clothing options to be here, but I found that to be part of the game’s appeal. I was shaking my head in confusion and wonder at some of the enemy descriptions and relationships described, but they certainly made the game more interesting. 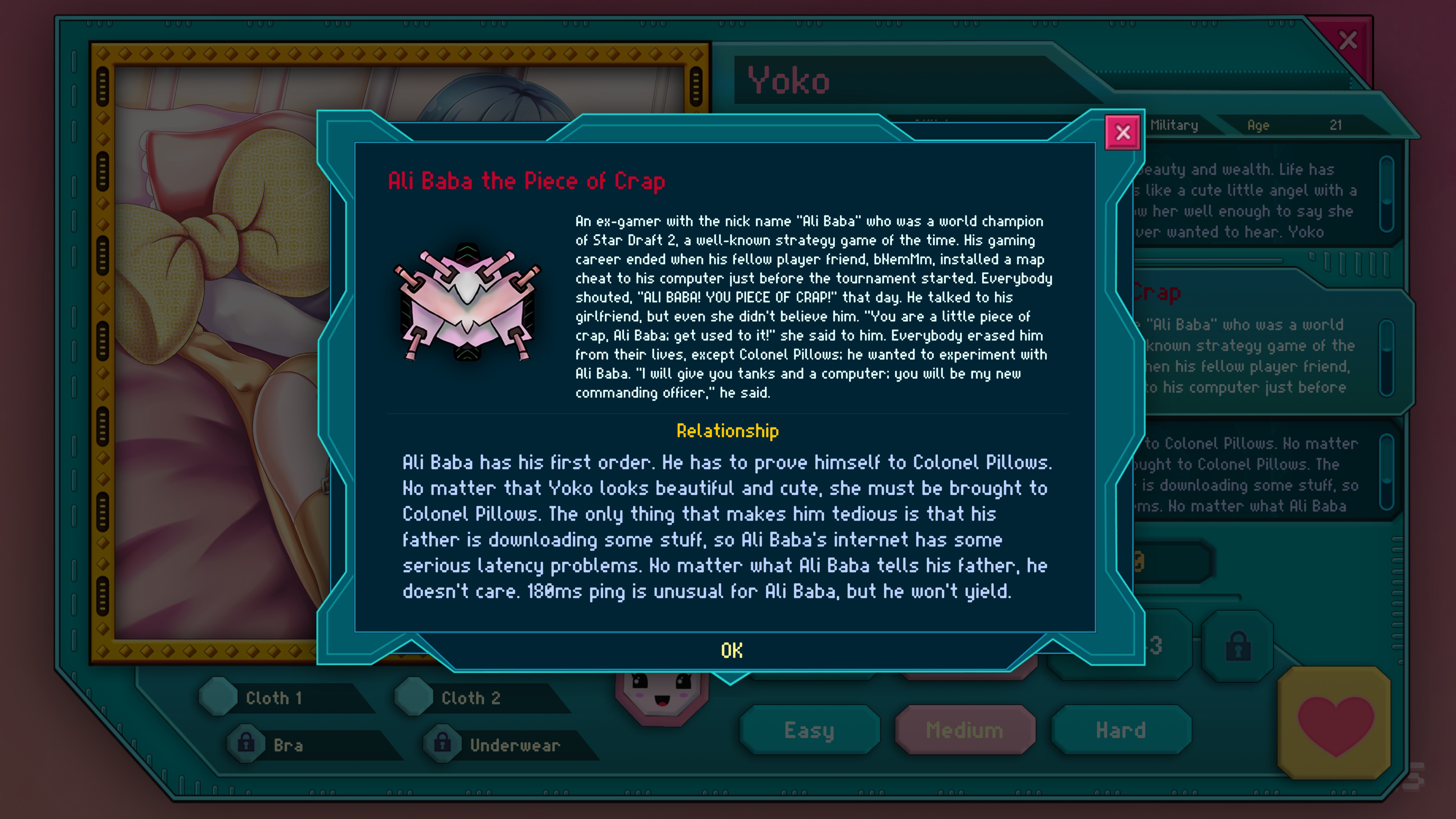 The writing is surprisingly good quality; some much bigger development studios could learn a thing or two from NAISU in this regard.

As far as graphics options go, it’s a Unity game with the standard launcher, modified to include only one Graphics quality: “Kawaii”. That was a nice touch! Graphics are quite pleasant, though most of the enemies have a certain sort of sameness to their appearance, even though their behaviours differ greatly. Some nice effects are included: the poison clouds and particle explosions of stars and hearts were particularly nice, and the game looks good in 4K, too. There are a few in-game settings for different volumes and gameplay aspects,

The game has some voice work, which is also pretty high quality. It sounds like only a few (maybe only one male and one female) voice actor doing all the work, but the female voices in particular fit the game very well. Some of the male enemy voices get a bit grating at times, particularly since there’s little variation in what each enemy says.

Completing story mode unlocks arcade mode, which just runs you through the same levels again with a limited number of lives. I played it a couple of times, but with such limited art, playing the same levels over and over is not very appealing, even with the global leader board pushing you on. Some interesting achievements increase the otherwise very limited replayability, but unless you’re an achievement hunter I doubt they’ll keep you interested enough to unlock them all. I unlocked 72% of them in 80 minutes and I’ve basically had enough. 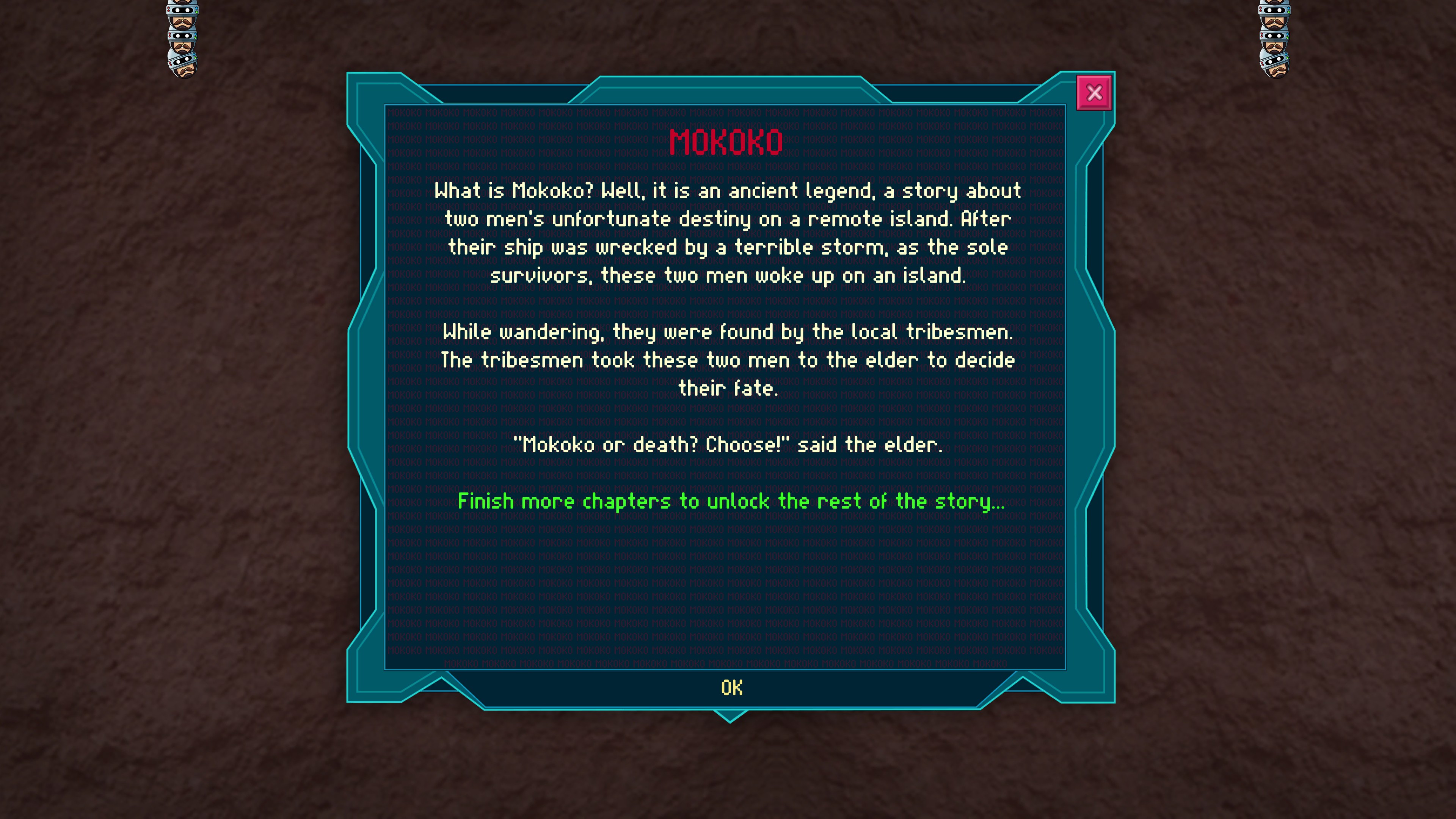 Mokoko is well produced and enjoyable, but it’s fairly limited. The story and enemies are surprisingly varied and interesting, and it’s the most fun Qix-with-boobies game I’ve played. But it needs more art; one image per girl — i.e. one image per three levels — even with the various clothing options just isn’t enough.

Pick it up for a bit of casual fun, and to laugh at the retelling of an old joke, just don’t expect too much.