The beginning of a promising dystopian future RPG series with tactical battles.

‘Rain of Reflections’ is a story taking place in a dystopian future, in a world where humans have become infertile. The whole story appears to have been split into several chapters, each chapter being an individual game and having a different protagonist. For now, it seems at least 3 chapters have been planned for the whole story. ‘Set Free’ is the first chapter in this series that introduces us to the setting and the conflicts happening within it. The game fuses together deep narrative and world building with tactical isometric battles. Let’s see how well it managed to pull everything off. 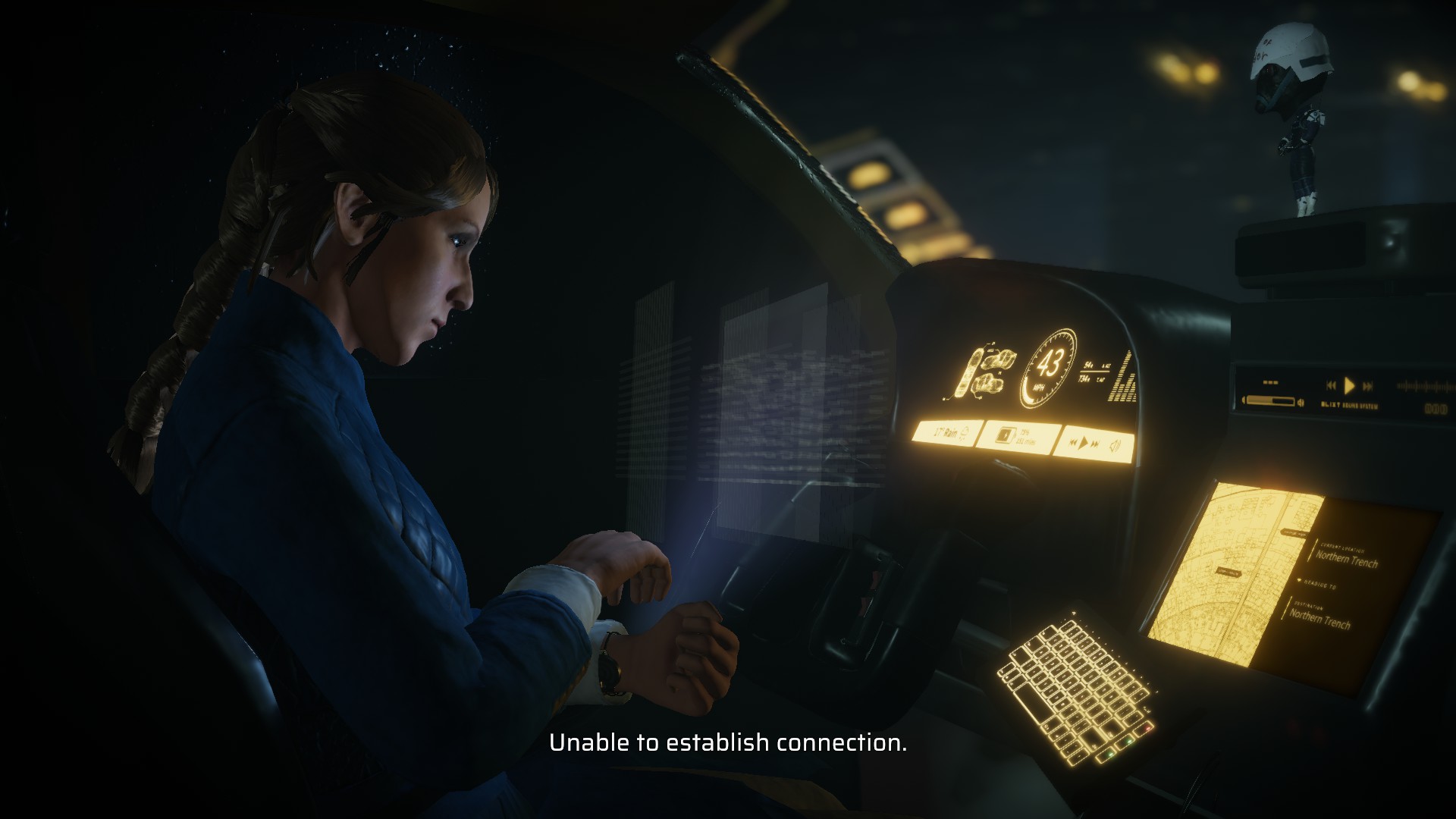 We play this chapter as the character Wilona. She’s a young scientist whose parents occupy high positions in society, with her mother being a respected politician and her father a scientist doing groundbreaking research on trying to fix the world’s problem of infertility. Wilona herself is part of a rebel group that calls itself the Infrareds, who stand for freedom and human rights. This first chapter revolves around Wilona and another member of the Infrareds, Luca, trying to pull off an important mission that could bring about massive changes and set off a chain of events.

The game has a pretty decent world-building. There are parts of the environment we can interact with in every location and talk to NPCs, and each time we get a little glimpse of what the society is like in this setting. Since this chapter goes only for a few hours, we don’t get to see everything in this setting and only meet a small number of characters, but it already gives us a fine taste of what to expect in the future chapters.

The major characters have distinct personalities and relations with each other, although I think more screen time for many of them would’ve been good, so we could get to know them better and what motivates them. For example, we only get to have a couple of conversations between Wilona and her mother and only one conversation with her father. We also have Luca with us for most of the game, but the conversations with him are pretty short and mainly just about the mission, so we don’t know much about his background at all. 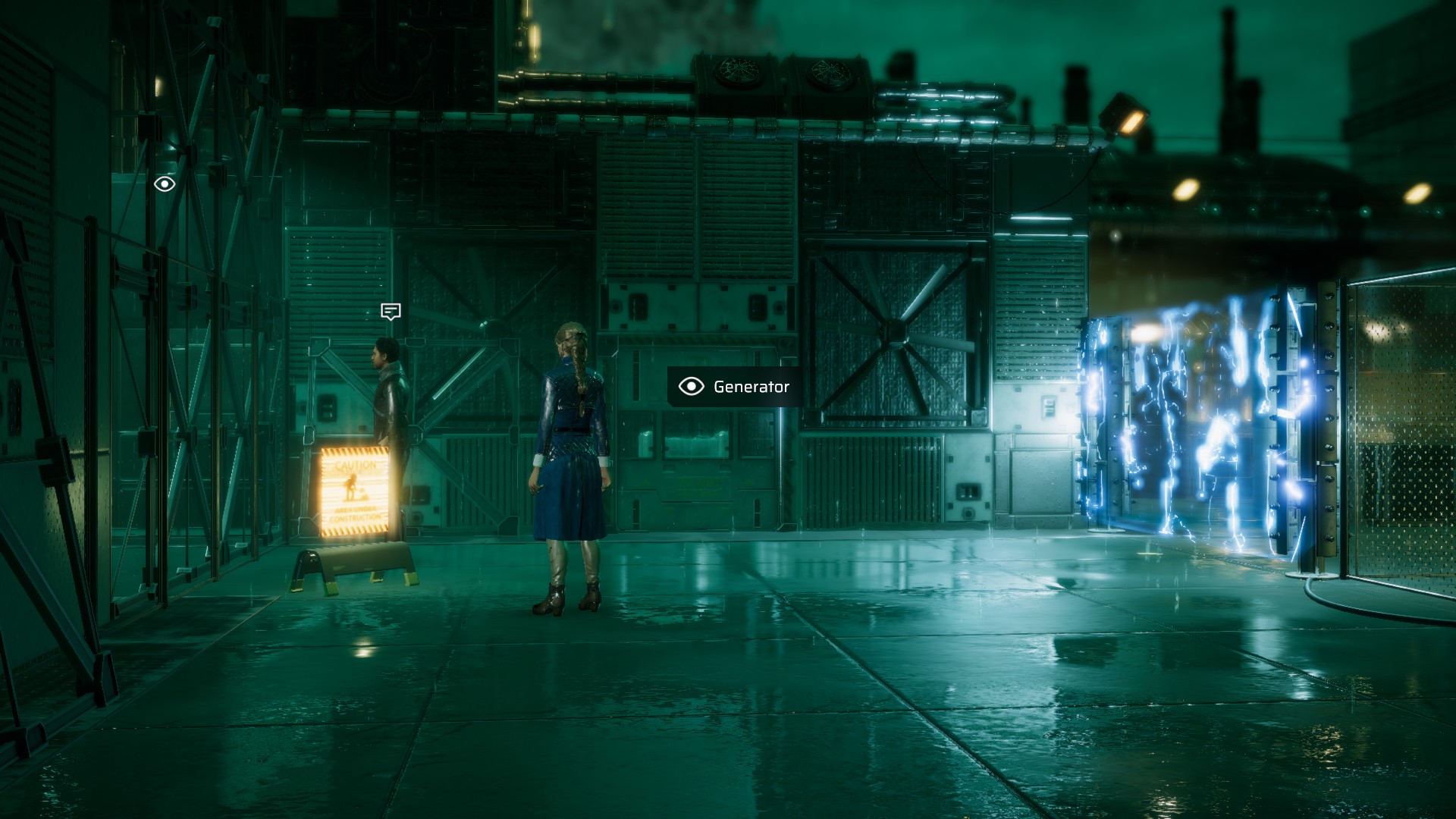 The gameplay here is quite diversified and can be broken down into 4 aspects: the role-playing, the point and click, the tactical encounters, and the hacking mini-games.

The role-playing happens mainly through the conversations. In each conversation we get to pick dialogue choices for our character to say. Although how much of the game these choices affect is a little unclear. The story still continues along the same path regardless of whether you’ve had a positive video call with your mother or not or whether you tell Luca off for the questionable decisions he does. So, the impact of the dialogue choices doesn’t seem too grand. 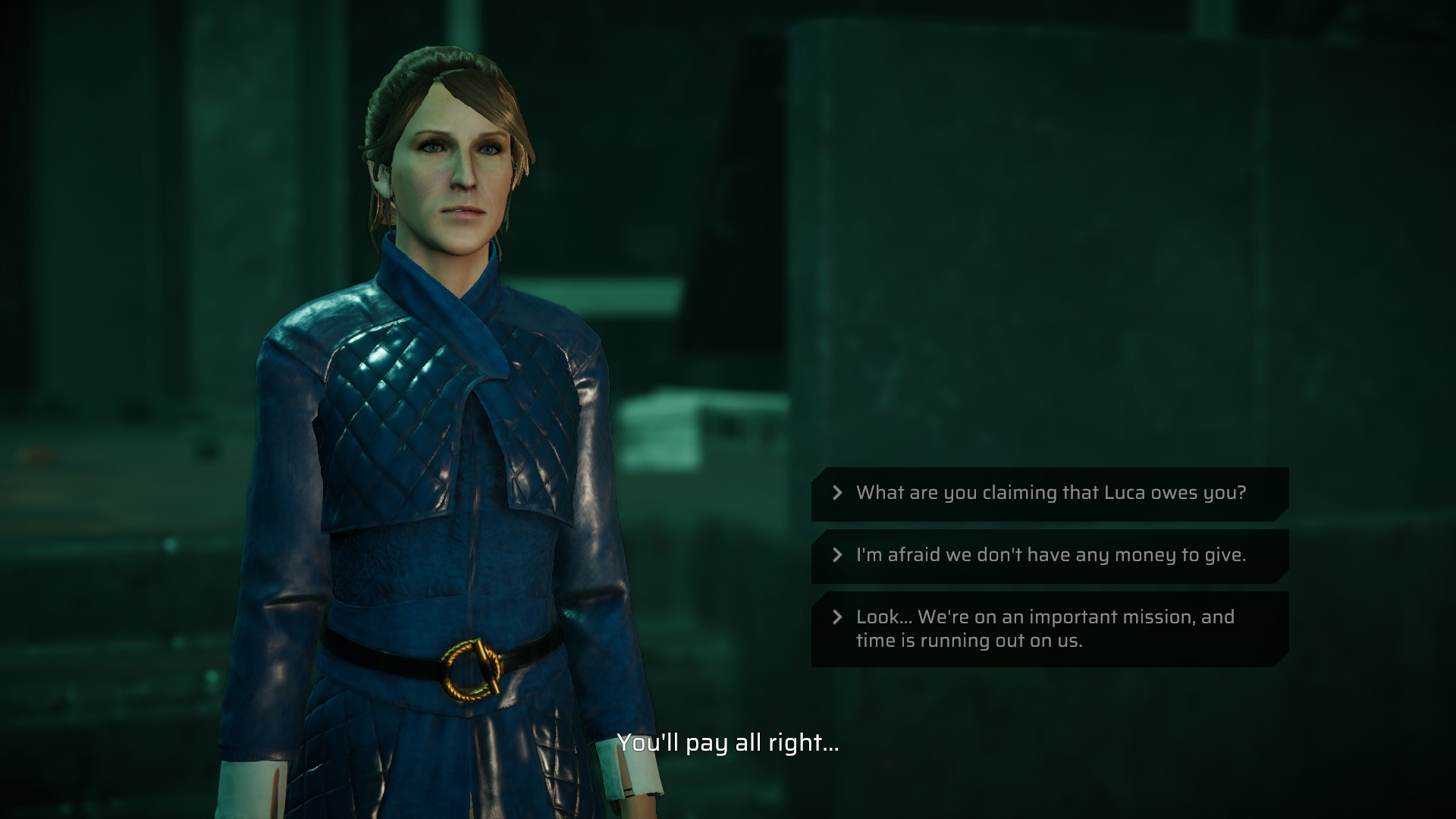 At times the options given were a little too polarising and lacked neutrality. For example, trying to respond to Wilona’s mother being too overprotective of her, you can either just lie to her and tell her everything is ok and you’re not up to anything suspicious or act like a spoiled teenager and tell her you want your freedom and for her to stop bothering you. You can even just hang up on her too.
A few other dialogue conversations were executed well though, such as when trying to diffuse tense situations or trying to get NPCs to do as you want.

The point and click aspect was mainly about exploring and interacting with the environment, but at times there were small puzzles to solve, such as trying to figure out how to get to the other side of a canal that’s being guarded. So a little manipulation of the environment was needed in order to make progress.

These were probably the best part of the gameplay. At first glance they remind us of the turn-based fights in XCOM games. However, the ones in this game have some very notable differences in their mechanics. Whereas in games like XCOM the goal is to kill the enemies and move on, here enemies have to be dealt in other ways, since Wilona and Luca are not powerhouses who can mow down dozens of soldiers with ease. The game encourages other means of overcoming enemies – mainly the use of stealth and the motivation mechanic. 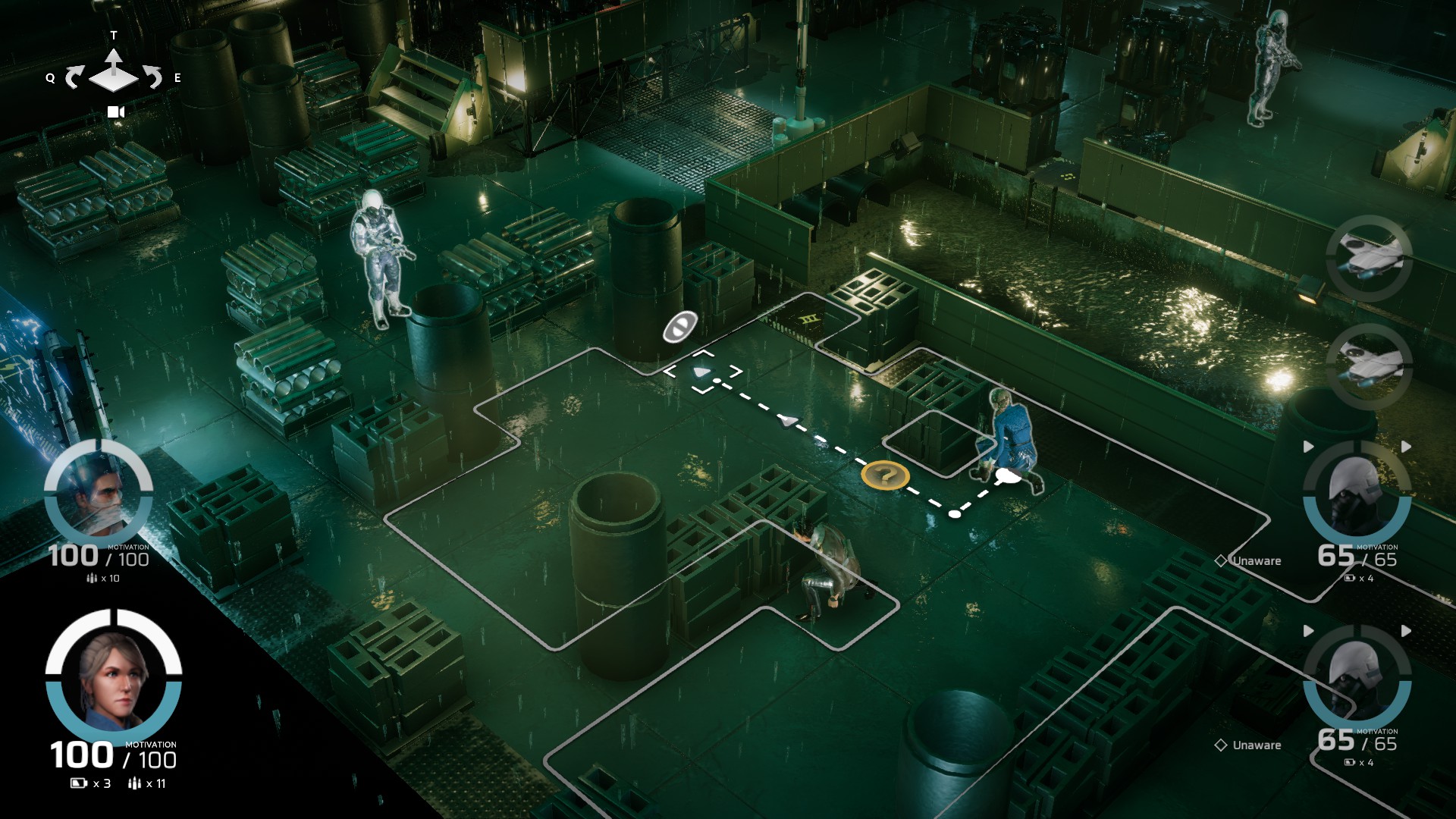 Stealth is handled with Wilona’s invisibility cloak. Since she is a scientist, she designed an experimental cloak that allows her to briefly be invisible and get past the guards. Going into cloak mode, however, uses up batteries, which can be found when exploring the environment. Stealth is a nice addition to a tactical gameplay of this type, although we only really get to make the best of it in the first few encounters. After that, once Luca joins the party, who has no means of being stealthy, all stealth goes out the window and combat becomes a more reliable option. 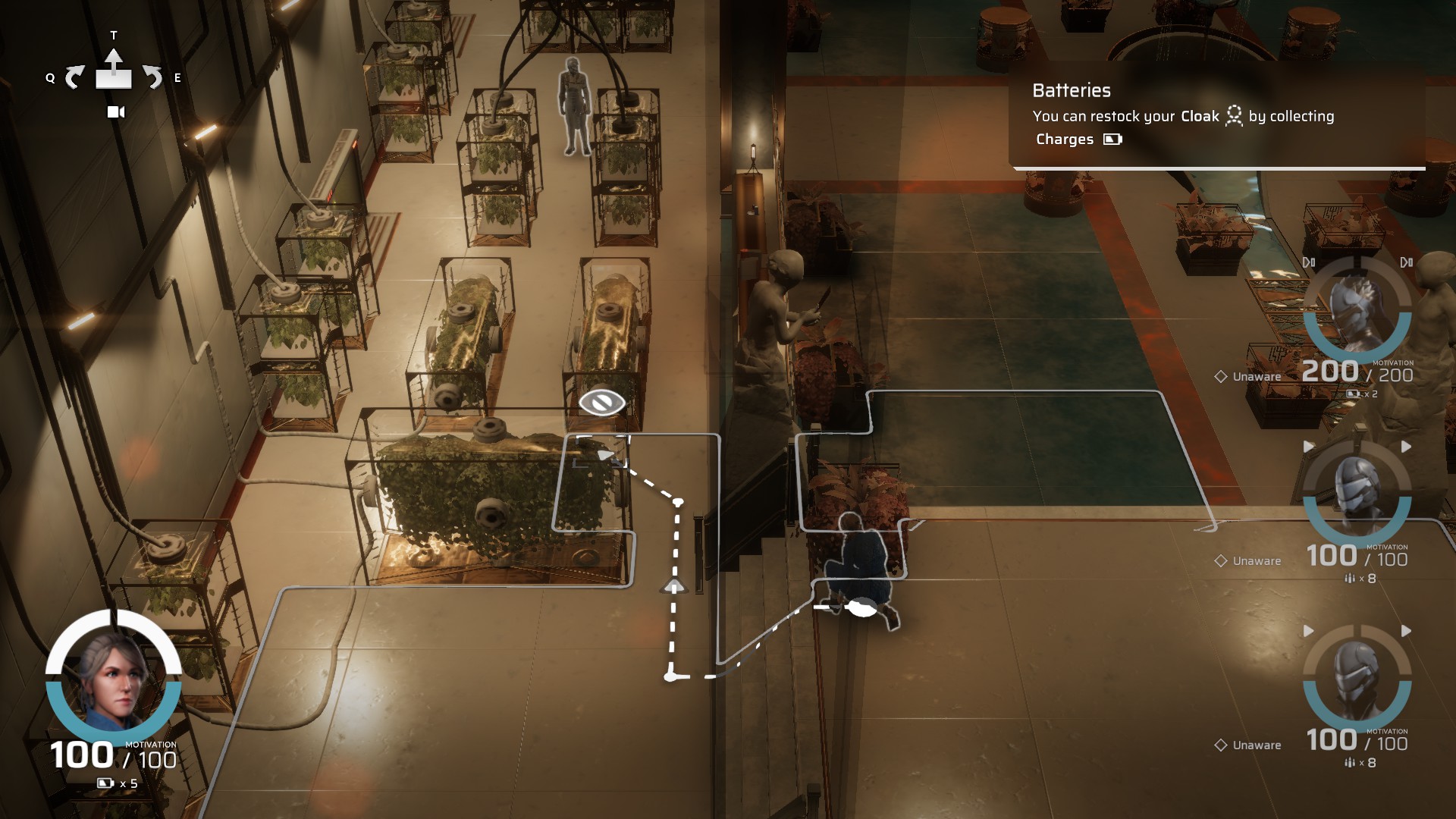 The motivation mechanic is also a very interesting addition to the battles. Allies and enemies all have a limited amount of motivation, and depending on how combat goes, this motivation can go up or down. Every time someone shoots in your direction or the cover you’re hiding behind gets destroyed, you lose motivation. The same applies to enemies too. You can raise motivation of your allies and at times reduce motivation of your enemies with one-liners too during your turns, which is an excellent idea. 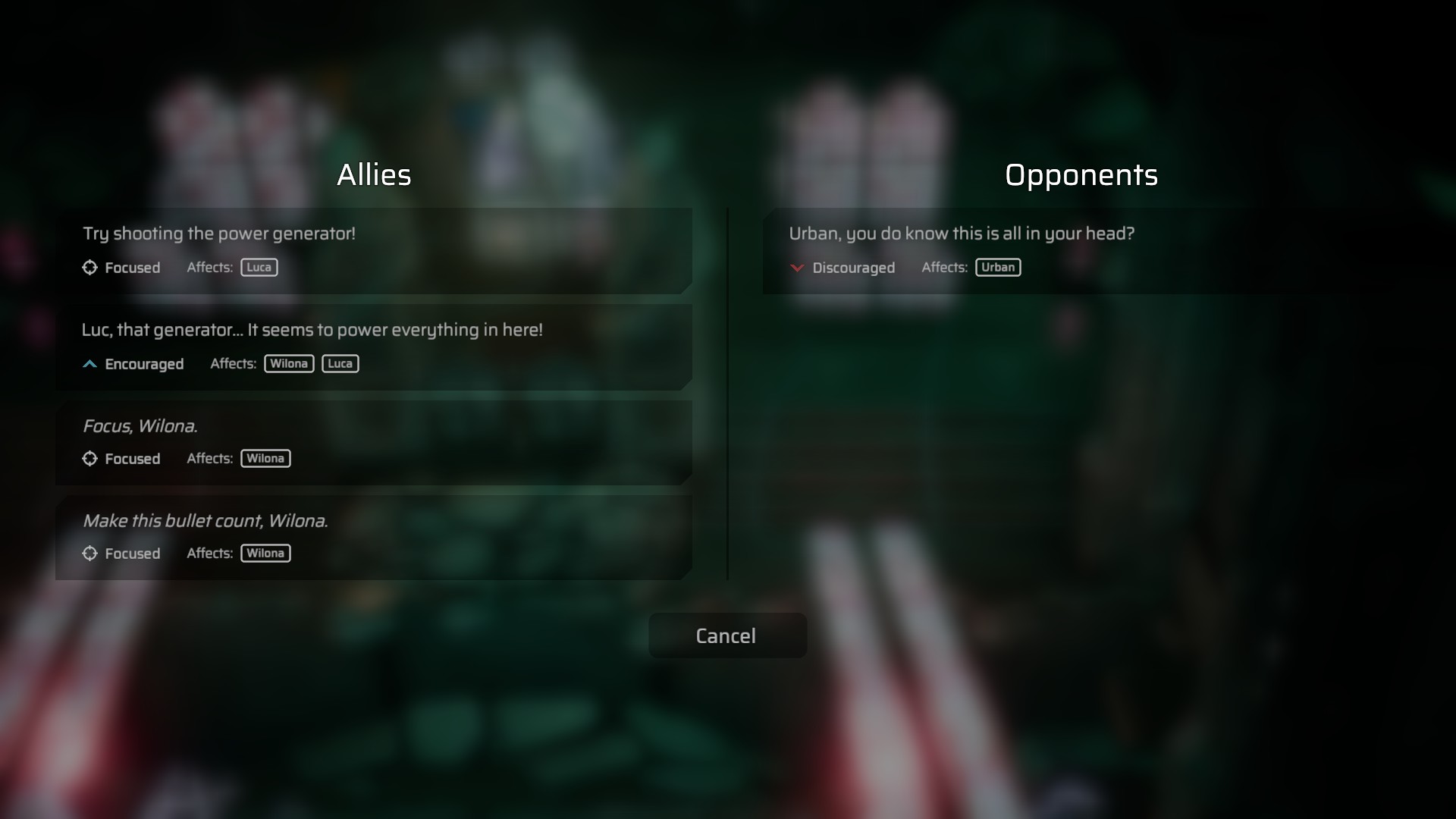 The motivation also plays a vital role as a defence mechanism. Allies and enemies can choose to use up motivation points to avoid taking damage when shot at. From what I’ve played, enemies seem to use this 100% of the time and in fact I’ve not landed a single shot at them. After managing to make them do this 2-3 times, their motivation drops considerably and they start to flee. You can easily win every single combat encounter by scaring your enemies nearly to death and making them run away. You can at this point finish them off if you wish, though that might be a waste of turns, which you can better spend demotivating enemies that are still in the fight.

No sci-fi RPG is complete without a hacking mini-game. Some games do an awful job at these, while others manage to make these mini-games somewhat decent. Gladly, in the Rain of Reflections, the hacking falls into the latter category.
In fact, there are 3 different hacking mini-games that we come across: Firewall, Breach, and Transmissions.

The Firewall, in my opinion, is the weakest one in terms of execution as it requires us to rotate around a 3D shape to fit into a flat 2D frame, which is probably more annoying than challenging, because it’s a little hard to perceive this 2D-3D interaction on a flat-screen. Maybe in a VR this mini-game would work amazingly, but not so much on a flat-screen. Having a limited number of turns makes this all the more annoying. 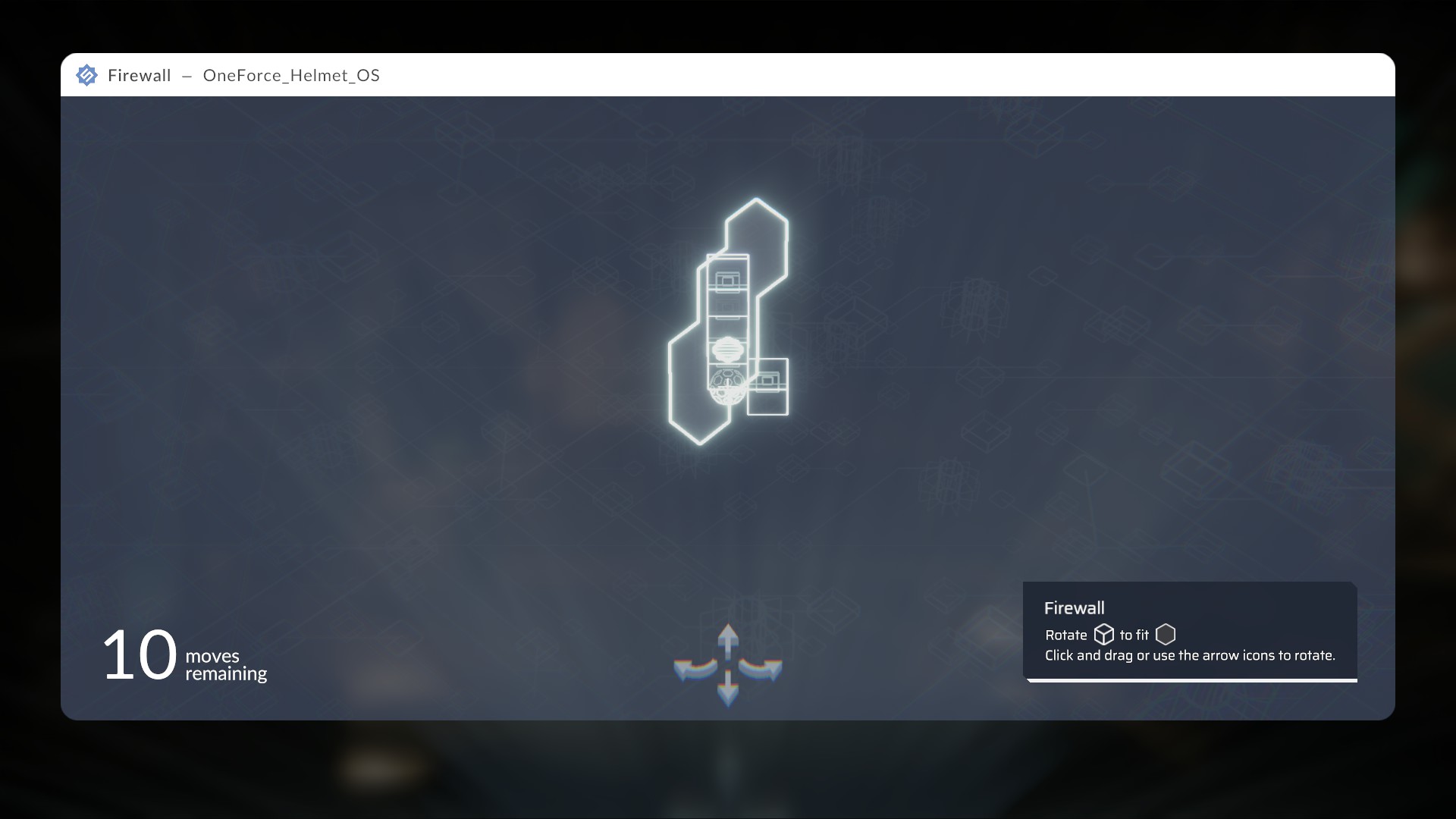 The Breach mini-game is a very nice idea and has a lot of tactical depth going for it. It requires us to navigate a ball towards a specific node, taking it around obstacles and to avoid the edges of the arena, while at the same time not letting the ‘security’ to catch up to us. The key part of this minigame is that the ball we’re navigating gains momentum as we move it, so we have to take great care with how we navigate it, to control our movement, and to use walls to bounce off of. This all happens on a turn-based basis, so we can think every move through. This is the most common hacking mini-game and is generally quite fun, even the more challenging instances of it. 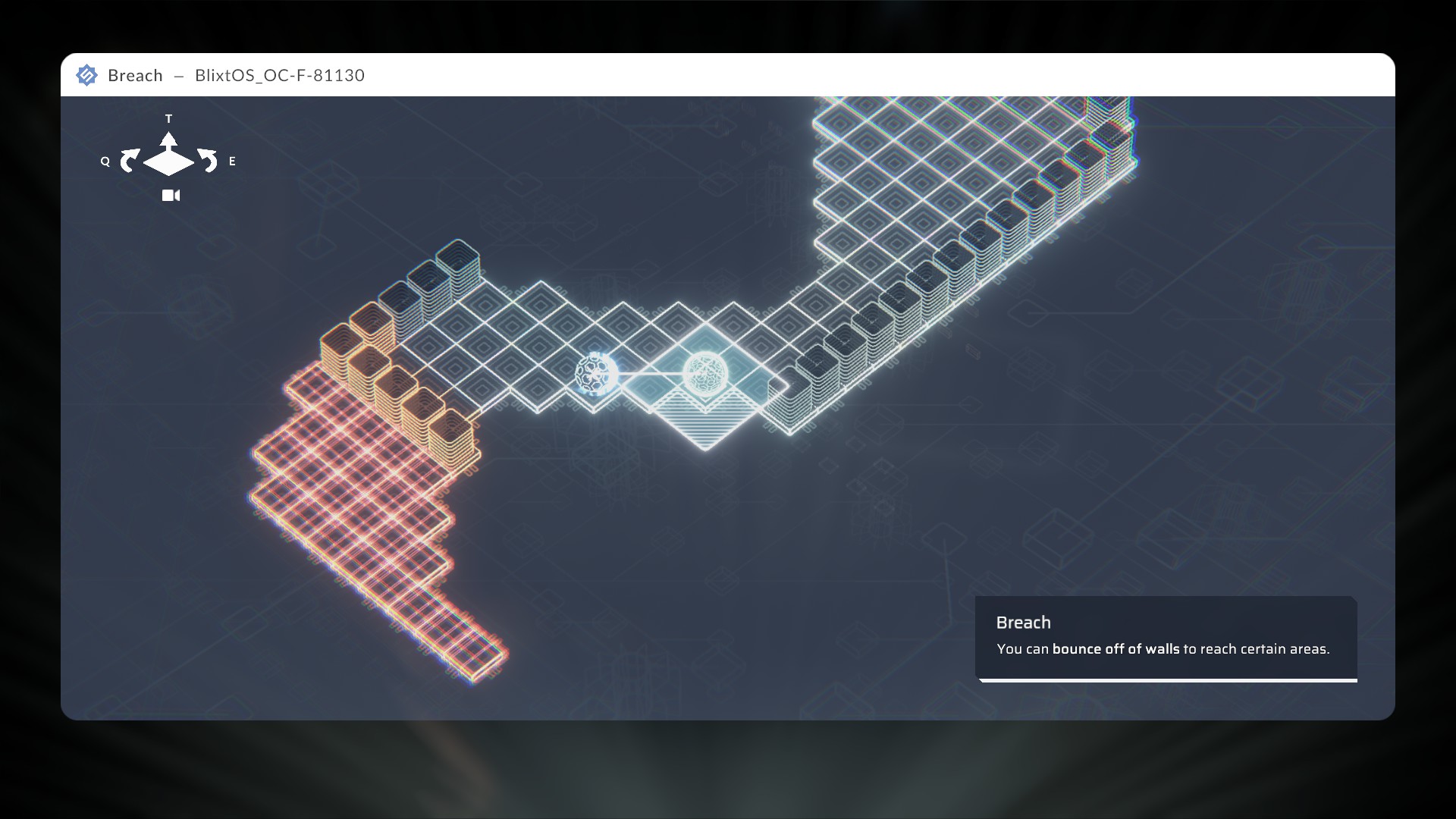 The third one is the Transmissions mini-game, and this requires us to navigate a small maze and to pay attention to which direction the transmission signal is coming from (it’s indicated by a higher amplitude in a sound wave). We use this information to determine which tile the signal is coming from. This was also a fun mini-game, though it’s the least common one of the three.

The game has an excellent visual design. The dystopian cyberpunk world is put together quite beautifully, with every location having its distinct atmosphere. The large amounts of industrialism and inequality between the rich and the poor is felt quite strongly simply by exploring the environments. The designs of the soldiers, called Bolts, also give off that sort of vibe of a highly authoritarian regime with a lot of indoctrination and where small mistakes carry severe punishments. 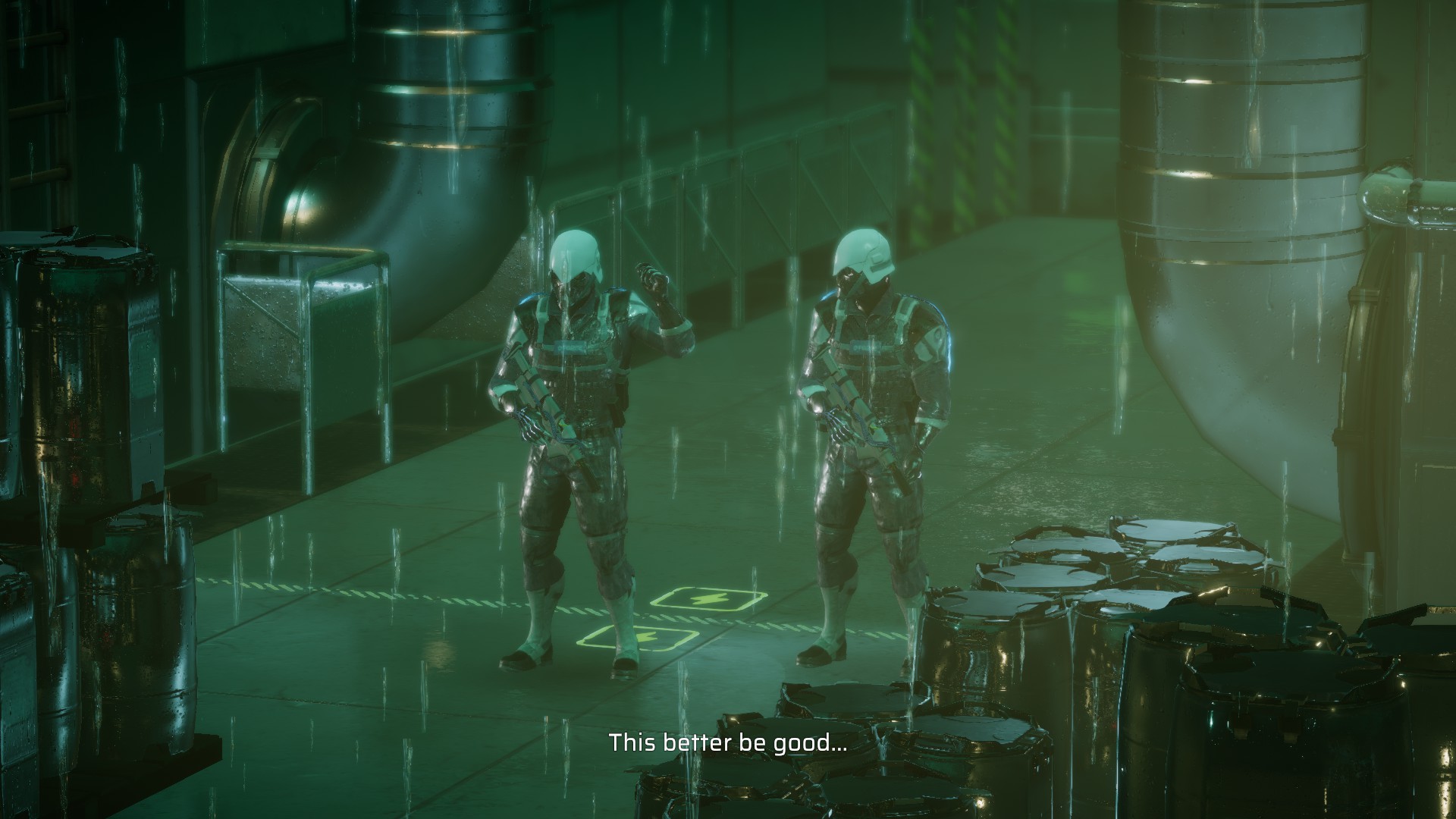 The character models, in general, look believable. The main character especially is someone you can believe can be a real person. She is very average-looking and is modestly dressed. So she won’t fulfil a cyberpunk hottie fetish for those who are into that. This allows us to focus more on her personality and relations with other characters, which is suitable for a story-centric game such as this.

The music is generally nice and atmospheric and fits every location well. The main theme, called ‘Into the Night’, especially stands out to me and is a wonderful song. I absolutely enjoy it when a game has a distinct main theme with vocals such as this one. It gives the game extra personality points.

Other aspects of the presentation, such as UI designs, sound effects, and amount of polish, all seem to be great. The game has had a lot of effort and passion put into it. 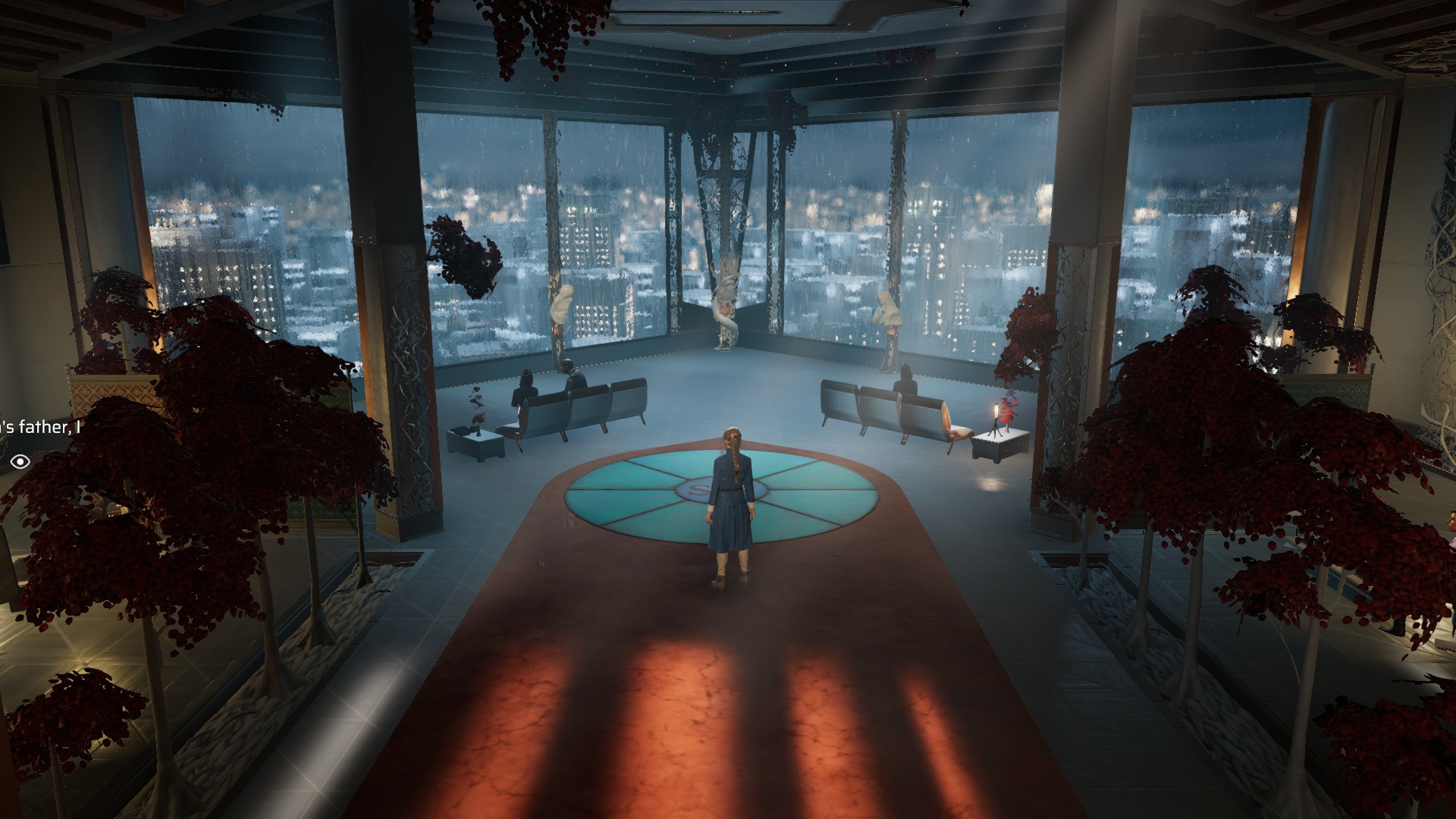 To summarize, ‘Rain of Reflections: Set Free’ is a very nice sci-fi RPG with a promising story and nicely thought out tactical encounters. It manages to offer a lot of different gameplay elements in its fairly short overall length. There’s virtually no padding whatsoever. It took me about 4 and a half hours to go through the game while trying to explore everything I could, and the entirety of these hours was fresh and diverse. I never felt that any aspect of the game went on for too long or was overdone (with the exception of maybe there being a bit too much hacking to do in the very last area). The game also opens up some possibilities for repeat playthroughs due to some of the choices it gives us.

I think as far as narrative, gameplay, and presentation, this game does a great job with each one, and perhaps its only real drawback is the short length. Short length by itself is of course not bad, especially considering that the game doesn’t cost much (and is a total steal if you get it for 50% off), but I can’t help thinking that the story ends a bit too abruptly and feels incomplete as a standalone game, especially just as it starts getting really interesting. So, I think, this is the biggest factor that could put some people off, and those people might only want to try this game once all of the chapters are out. This first chapter was a rather small but a very delicious slice of the pie with all the right ingredients. Hopefully we’ll see the remaining chapters sooner rather than later.