I swear Darksiders manages to change itself every iteration and keep my love and support for it.

Ending the year of a good note for a change, Darksiders Genesis is a game I urge action-adventure and RPG fans in general, including Darksiders fans such as myself. I’ve been playing this franchise since the inception back in 2010 and never failed a single iteration, I watched it go from an awesome Zelda like God of War pseudo clone, going through an ARPG Devil May Cry pseudo clone crisis and ending in a Dark Souls pseudo clone – Darksiders 1, 2 and 3 respectively. The curious thing is that they all managed to build a world with lore, characters and mechanics varied and unique enough to make the franchise stand on its own feet and even after THQ went under back at around the time Darksiders 2 came out, the loyal fanbase stuck and the game somehow managed to have 3 main titles with a spin-off in the form of Genesis and hopefully, a fourth and final iteration with the last horseman to star: Strife.

For the time being, all eyes are on Genesis and although some overall design decisions that don’t affect the gameplay itself (much) don’t really work… Genesis is a fantastic game worth playing due to a rather unique blend of mechanics that I haven’t seen… ever.

While I called it a spin-off as it’s not directly tied to the main plot of the franchise, it is a prequel to the original, even ending pretty much at the start of the original and keeping everything tied together, something 2 and 3 (3 in particular) didn’t really focus on.

Having the ability to play as 1 of 2 characters at any time, you can be both War and Strife at your choosing, both Horsemen of the Apocalypse tasked by the Charred Council to uncover a conspiracy among demons. As you complete missions, complexity goes up exponentially and it won’t be as simple as you initially thought.
The story is fairly well written and progresses at a break-neck pace I’ll admit I wasn’t a fan of, jumping from level to level with little progression in the middle so it all felt like level skipping and not a cohesive story like the first 3 games did a lot better.

This ties in a way with the gameplay as Genesis doesn’t have a world with all levels and dungeons connected between each other as the previous used us to. Instead, Genesis has a hub (Vulgrim’s chambers inside the Serpent Holes) where you can then select the levels you’re heading to – you’re even allowed to grind by playing previous levels.

Mixing the hack n’ slash gameplay of the previous games with a top-down view similar to the one observed in the developer’s (Airship Syndicate) previous game, Battle Chasers, Genesis manages to blend the great melee combo-based combat of War with Strife’s more ranged combat thanks to his tendency to use pistols as a means of combat (which Darksiders 3 also properly hinted/introduced).

War plays very much like in Darksiders 1, feeling heavier to control thanks to his heavy-hitting sword, Chaoseater. You can buy combos for him, a lot of them borrowed from the original, keeping his performance and overall feel very nostalgic, which is great.

Strife, on the other hand, is far different from all other horsemen (which make me more curious about Darksiders 4’s gameplay) as his revolvers are the main mean of combat, with variety not coming through combos like war, but through ammo types which change your attacks massively. From the regular bullets to charged shots and laser beams, Strife’s gameplay is changed with progression massively, while War still feels roughly the same from beginning to end, only with a couple combos more. And yes, Chaos Form returns and it’s as awesome as it always was. 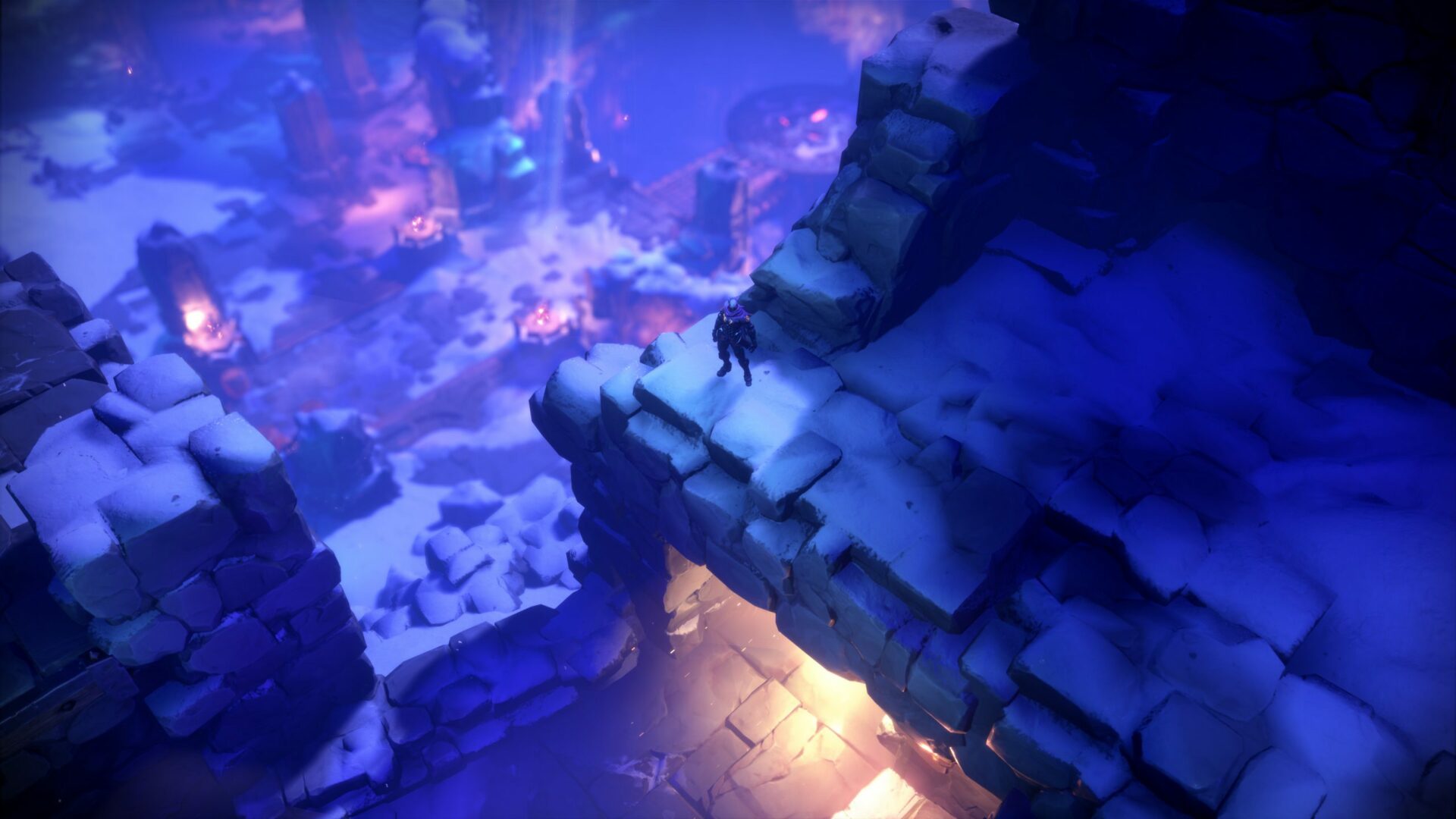 Level design in the game is pretty great. The game is split into levels/chapters, each with its own small open-world (sort of like how Darksiders 1 worked with the Twilight Cathedral, etc.) to explore, kill creatures and progress until the objective is done and you can teleport back. Some levels need you to go back when new items are unlocked in order to reach secrets and certain collectables, something Darksiders fans are 100% used to at this point. The levels are all incredibly varied and fun to explore, keeping the Darksiders feel intact with both combat and puzzles being well designed overall. Pacing between both is weaker than usual though as I felt combat was thrown in far more than the puzzles which were overall way too easy while in previous games, some puzzles managed to keep me scratching my head for quite a while. Overall I wish a bit more puzzles were in the game but the combat is really fun so it’s not a major issue, especially for those Darksiders fans that dislike the puzzle aspects.

Another issue is the lack of a minimap and proper localization within the map. In order to know where you are, you must open the map in the menu, which can only be opened once you actually find it in the level; until then, you’re in complete darkness as to your whereabouts and the lack of a minimap is a sure-fire way to get you lost in some levels so I recommend you pay attention to the surrounding and draw a mental map until you find the real in-game one. Even once you do find it, however… you can open it but you can’t see where you are, only in which level subsection you are which is jarring to say the least and a poor map decision. Some levels are quite big and the map is not nearly as detailed as it should be for me to give a free pass on this odd design decision.

A great addition to the game is creature cores – by killing enemies (regular goons or even elites and bosses), there’s a chance for each enemy to drop a creature core with its name, each has a bonus type and a passive bonus associated with it, which you can then slot in the skill tree. These bonuses can then be upgraded once you find a certain amount of the same creature cores. This is where the grinding for an overall power level comes in. Most of the rewards from the arena are precisely creature cores (some legendary for the highest bonuses such as more damage or parry window extensions).

Multiplayer makes an introduction in the franchise but I sadly did not try it (I did try split screen – which I am beyond thankful for, not often we see developers remember split-screen exists and should be done more) but the local co-op worked fine, thankfully. For online, you can open a game and just invite a friend, easy as pie. For split-screen players, the first player must first find a stone and activate it in order to enable split-screen – there’s one in the game hub so it’s not hard to activate.

Overall, I really must praise the great level variety and design, the combat is varied and upgrades progress at a great pace and the grinding is quite interesting. While it could use more puzzles, the combat is fun enough and allowing you to switch at any time between two fun and very different (and balanced) characters also helps keep the game fresh throughout its 12-15 hour journey (it took me 12 hours but I can see folk grinding previous levels or losing themselves in the arena a bit so 15 hours is equally a normal time, I think).

Graphics-wise, Genesis looks a lot like Battle Chasers, the developers’ previous game as I had mentioned before. A nice mix of realistic textures with a comic book art style (in particular during cutscenes) that captures the Darksiders world in general really well, no game in the franchise has disappointed yet and had phenomenal art direction so it’s nice to see an indie studio like Airship Syndicate nail it here too.

The options menu is very customizable and the performance is great with no dips at all, a great PC version overall!

As for audio, music has been a big thing for Darksiders but Genesis seems to fall pretty flat as nothing is memorable. Jesper Kyd’s OST for Darksiders 2 is still one of my favourites of the decade and to see Genesis be barely noticeable at all is a big let down.
However, voice acting is perfect. War and Strife sound just like they did in the previous games where they showed up, Vulgrim and Samael also make a return and sound as great as they always did and even the new demon Dis is well voiced.
Sound effects, in general, are equally praise-worthy, with War’s sword slashes and smashes sounding as powerful as they should, Strife’s guns sound really great and the Charge Shot in particular sounds so great I felt I was smashing demons all over again back in 2016’s DOOM. Really punchy and satisfying sounds during combat, elevating it even further.

At a lower price of 29,99€, it’s a must buy in my opinion, especially now in Christmas season. Darksiders fans will be thoroughly pleased with this great PC version of a phenomenally fun game. While a few more puzzles would be great, the lack of any proper map/minimap system is criminal and the music is disappointingly forgettable, Darksiders Genesis is December’s best release and one of 2019’s games I’ll hardly forget.