A side-scrolling adventure game with time travel elements that seems to fall short of its ambitions.

We play as an astronaut who returns to Earth after an apocalyptic event. He is now the last person on Earth, accompanied only by a voice of an artificial intelligence to guide him. Upon landing back on Earth, we find an unusual device that looks like an old lantern. Activating this device allows us to temporarily warp back in time to before the cataclysmic event. Using this lantern as part of the puzzle-solving mechanic to go back and forth between past and present, our astronaut decides to find out what happened and to locate any surviving people.

Upon hearing the premise, you might recognize there was another indie game that utilised this exact plot idea – The Silent Age. The idea of travelling back and forth between two time periods, before and after a catastrophe, has not been done much yet, and the concept itself is still fresh and interesting as it can be dressed up with a nice story and characters.

However, although with a concept like this you’d expect a solid focus on the story, The Great Perhaps seems to be a bit aimless right after the intro cutscenes. We find ourselves moving from area to area without much of a direction. There are almost no big events occurring that deliver any twists to the story and not many reveals to surprise us. A game with a premise like this has a lot of potential, but for much of the game it felt like this potential was not achieved. Much of the story seemed far too ambiguous and unclear and ended kind of abruptly without much of a closure of any sort, leaving a lot of disappointment in its wake.

There were a few NPCs with their own little side stories present, but majority of them only occupied about 5 minutes of the game and then to never be of any relevance to the story again. It would’ve been quite nice, I think, to delve a bit more into some of their lives. 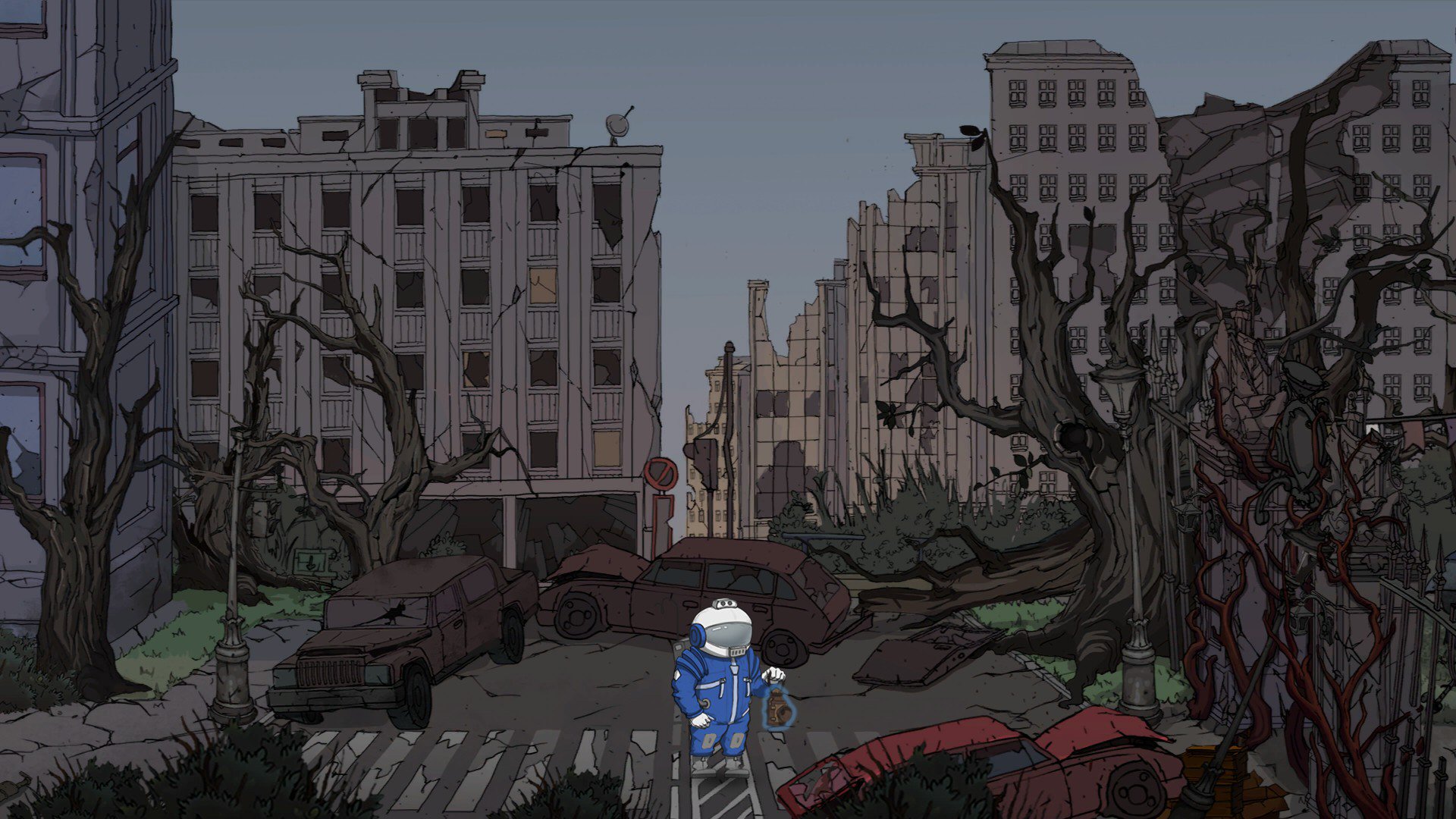 The gameplay mainly revolves around solving simple puzzles in each area and then moving onto the next one. Many of them are akin to puzzles in point-and-click games, where you find the appropriate items and you interact with parts of the environment, at times needing to use the items you’ve found where they’re needed. Some of the puzzles are just purely logic-based such as flipping blocks around to complete a circuit.

A few puzzles were somewhat creative and threw new elements into the game, such as time anomalies – hostile soldiers from the past which were partially appearing in the future too and needed to be dealt with. Other puzzles were a bit of a drag, such as needing to carry various pieces of a machine to where we could assemble it together while at the same time making sure we don’t get falling rocks land on us. 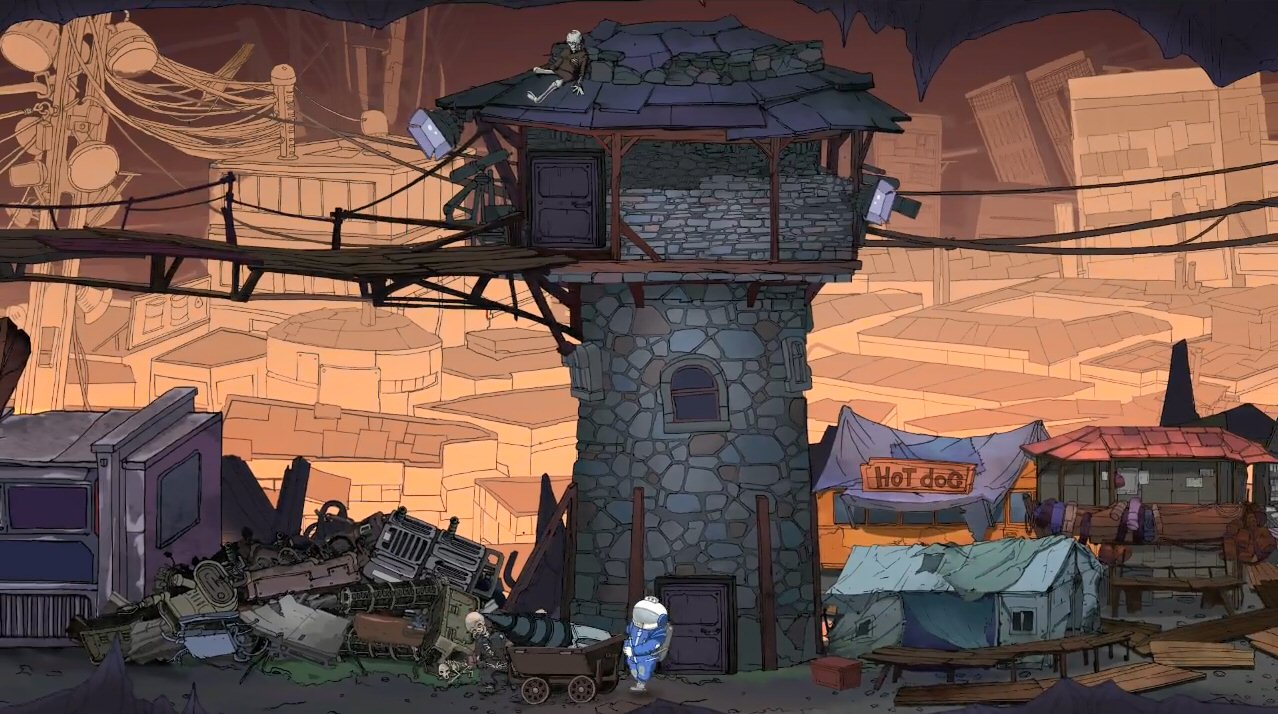 On many occasions, we also have to watch out for enemies and not let them attack us. In the post-apocalyptic future, the enemies we come across are mainly mutated animals of some kind, while in the pre-catastrophic time, it’s mainly humans, such as soldiers in a military base or doctors in a mental hospital. Having any enemy touch you is basically instant death. There are also many other instant death moments, such as warping from one time to another and ending up in a hole or some other wreckage. The game can feel a bit irritating in that regard, because many things kill you right off, and some of them are not obvious at all. You might think you can walk down into a small ravine or a pile of debris ahead of you, but think again, because those things kill you instantly. 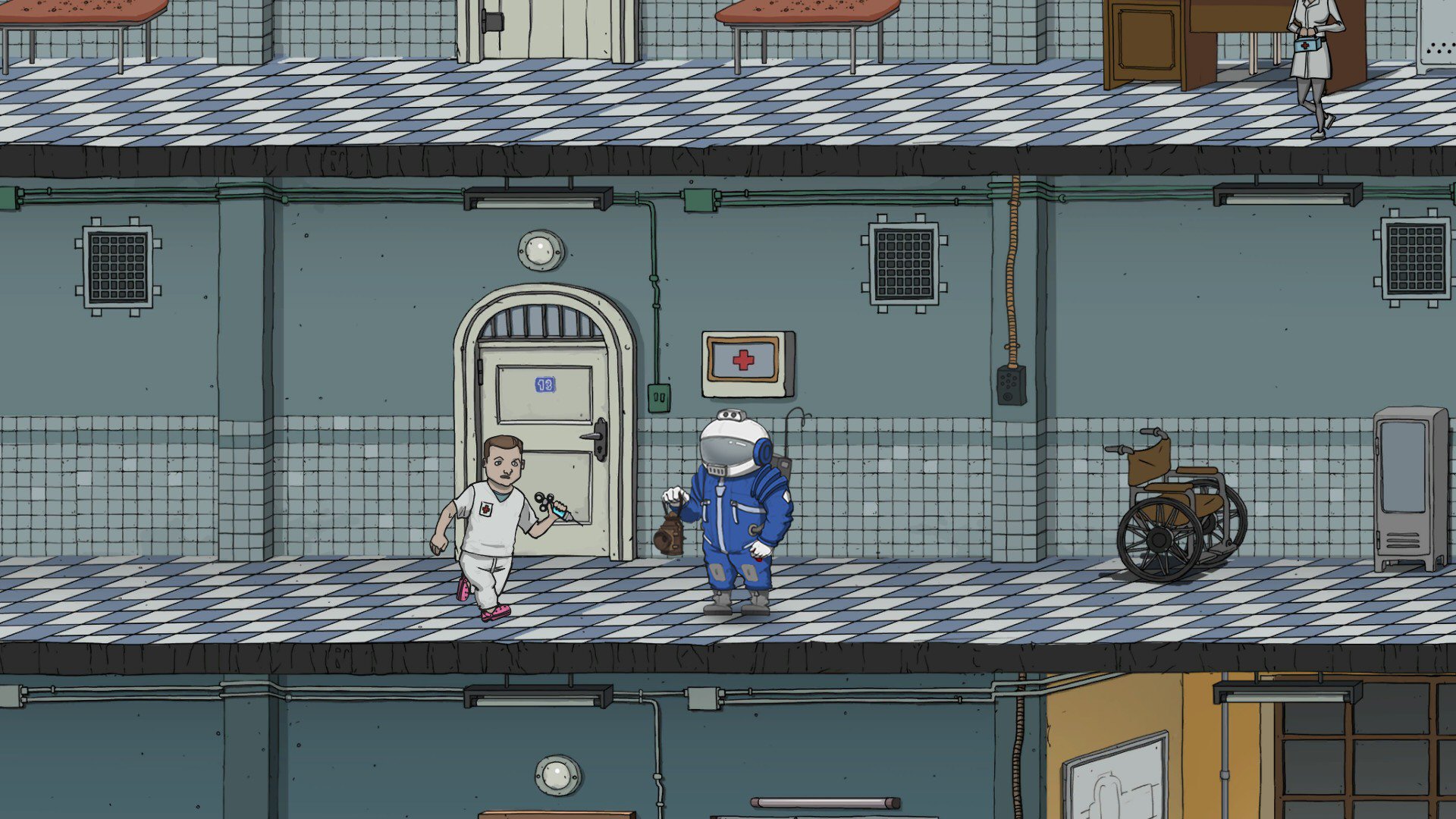 We do use the time-travel element a bit when solving the puzzles, but ultimately it’s not explored as well as you might expect, such as the aforementioned game The Silent Age did. You don’t really get to do specific actions in the past and then to see their outcomes in the future (such as planting a seed in the past and seeing it grow into a tree in the future). Mostly the time-travel element here just has you find an item in one time and then use it in another time, or use the alternative function of our lantern device which allows us to see a small glimpse of the other time and keep note of enemy locations and such before warping in time. So, this really felt like a missed opportunity, as though the game only scraped a surface of what it could potentially do.

Another odd thing was how teleporting into the past was timed, and we could only stay there for a few seconds before the lantern device pulled us back to the post-apocalyptic future. I think this mechanic seems to be more of an annoyance than anything else. It doesn’t add to the gameplay and only forces you to keep re-activating the lantern immediately after you get pulled back. 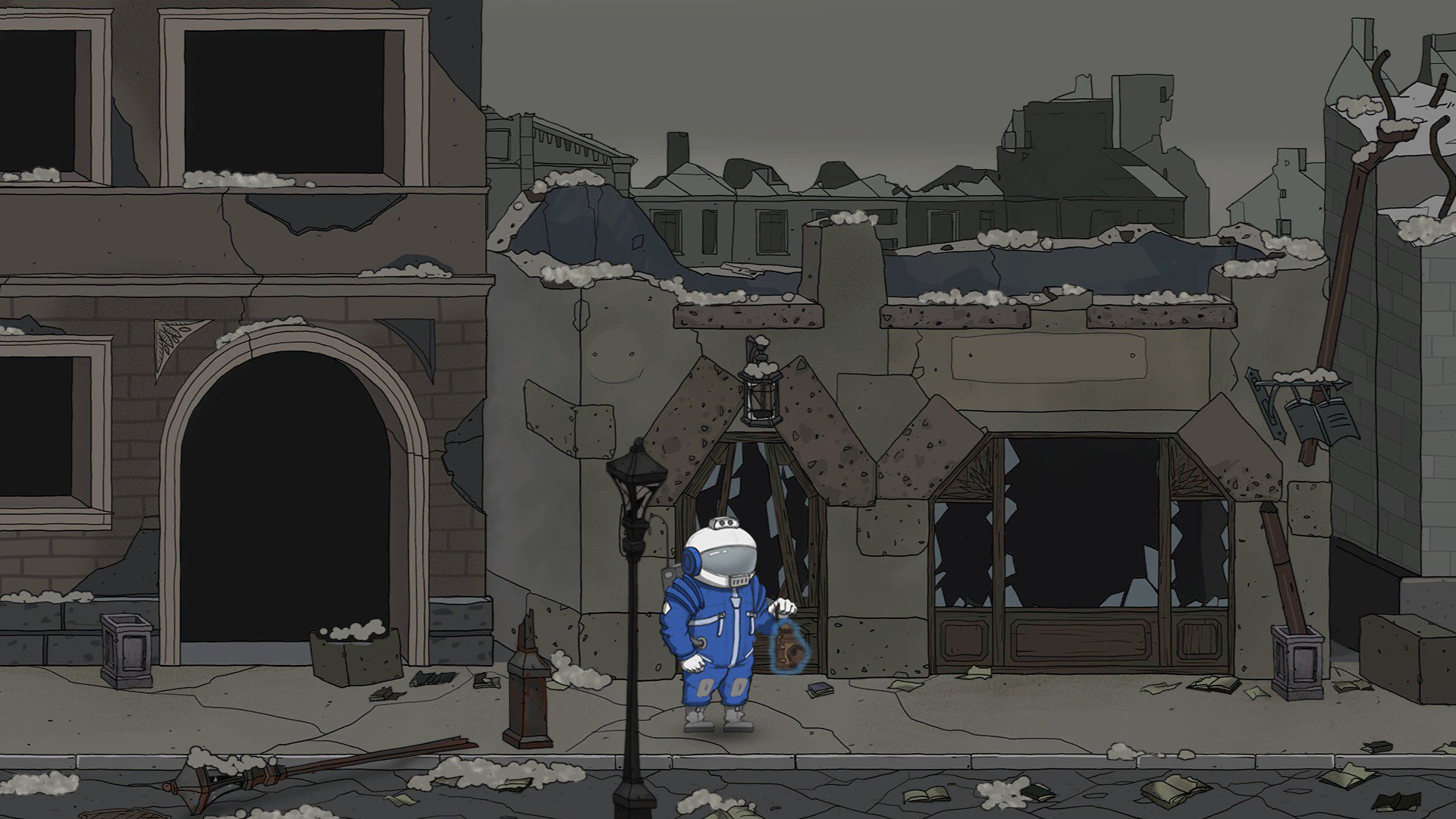 Even though the story and gameplay leave us wanting more, the presentation in this game is relatively good. The visuals are colorful and have an interesting cartoony style to them. Although for a game set in a post-apocalyptic future, I personally think cartoony visuals can be a little out of place, and slightly grittier visuals could’ve done a better job at conveying an oppressive and melancholy atmosphere. Some of the mutated animals we come across look more funny than threatening with these cartoony visuals. But overall this is a minor nitpick and more of a personal preference. For the most part, the visuals are fine enough and consistent throughout the game. 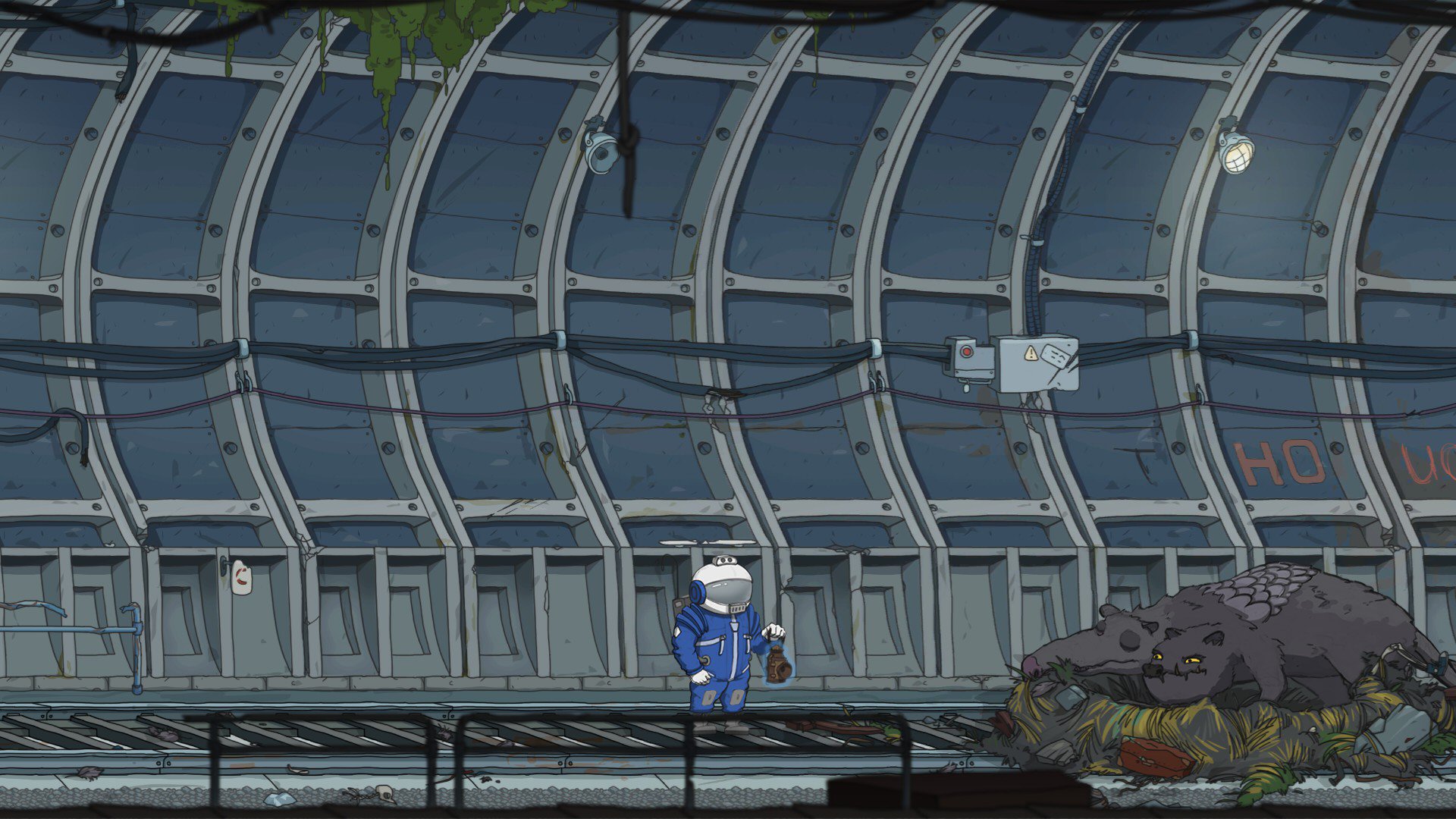 The music is really good and amplified the atmosphere of each place well. The theme playing in the main menu was also very pleasant to listen to, having a nice reflective and bittersweet feel to it. I think perhaps the musical score was the game’s strongest point.

The game has some voice acting too, mainly the conversations of the main protagonist with the A.I that’s accompanying him, although there are some lines by NPCs we come across too. It’s generally done well and fits the cartoony vibe the game is going for.

There was an odd bug that I came across when solving one of the in-game puzzles, where using the correct combination of ingredients to water a plant was not triggering an action. I tried quitting the game and coming back again but to no avail. Only after having started from the beginning of that chapter, the interaction with the plant worked fine. Other than that, there were no other serious bugs.

A game like this we’d normally play either for its compelling narrative or for interesting puzzles and, unfortunately, I don’t think ‘The Great Perhaps’ does either of those impressively enough for me to recommend. I think if its story was a little less vague and had more development, or if its puzzles utilized the time-traveling mechanic a bit better, then I would’ve easily given it a ‘Save for Later’ score, or maybe even a ‘Save’. It’s by no means a bad game, but it feels too lukewarm and unable to fulfil its potential. I’d personally recommend to play ‘The Silent Age’ if you really want a time-travelling puzzle game, and there are other good interactive adventure games if you’re looking for any story-driven game with puzzles. Regretfully, I must say that my view of ‘The Great Perhaps’ is teetering somewhere between a narrow recommendation and a complete pass. If, however, you are still very curious to try it, I’d personally suggest to get it at a discount.