A short puzzle game set in the underworld and done in an old-school pixel style.

You are a regular worker of the underworld and it seems there’s chaos there right now. You’ve been tasked with a job to find all the sinners imprisoned there and to send them for their punishment. To do this, we must go through 30 different puzzle rooms, find a sinner or sinners in each one, knock them into the lava by jumping onto their head Mario-style, and then leave through a door to the next room.

It plays very much like how you’d expect. Very old-school in its feel. Jumping between platforms, pushing boxes, and avoiding dangers such as spikes. But it doesn’t consist of continuous levels. Rather each stage is just a room that can fit on your screen. Everything you need to solve the puzzle in the room is there in it, and once you’re done, you go to the next room, never to look back.

The puzzles, however, aren’t your simple push the box here, flip a switch, and move on, even though it might seem that way at first from the initial couple of stages. But very soon you realise that you actually have to plan your route several steps ahead. Because it is easy to make a wrong move and mess up the whole puzzle or end up trapped somewhere you can’t get out from, in which case you have to kill yourself in order to reset everything in the room.

The game starts us off with the basics – jumping, moving boxes and using them as blocks on which we can jump to reach higher places, and whacking the sinners on the head. Then it starts gradually adding new elements to it, such as the rooms where going off one edge will bring you to the opposite side of the screen, and also some new items that change the mechanics of puzzles altogether. 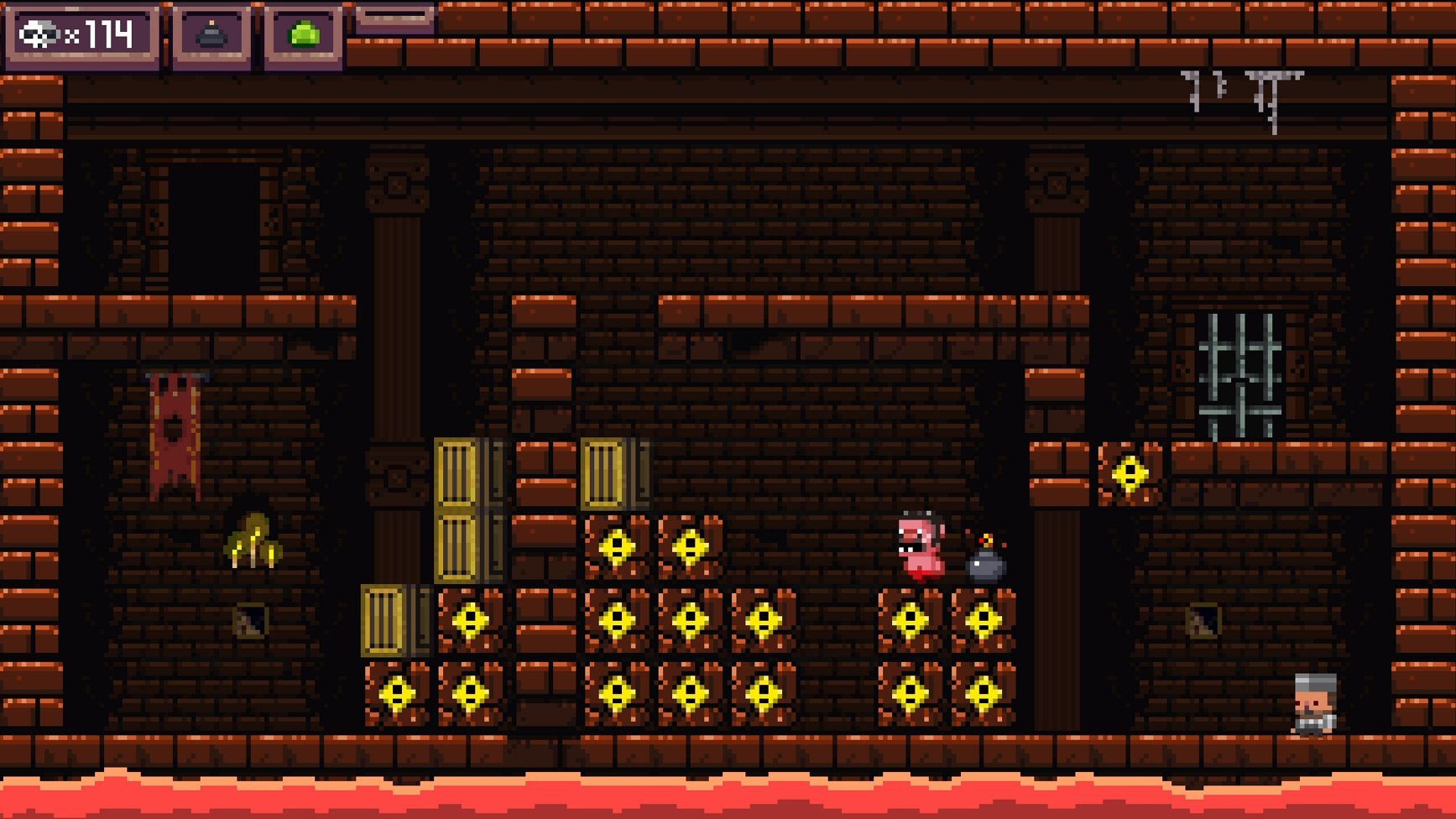 The first item we get are the bombs. Bombs allow us to destroy certain types of blocks, so we can carve our own path through some stages and also to off the sinners with something other than a boot to the head. Best thing is we’ve got an infinite supply of them, but we can only use one at a time, so we can’t place a new bomb until the one we’ve placed has gone off.

The next item we get is the bouncy slime. Placing that and jumping on it allows us to jump roughly twice as high, which changes things in that now we are able to make jumps we couldn’t before, and this element needs to be taken into account when planning our solutions.

And finally, the last item we get is a magnet or, how the game calls it, gravity improvement. Activating gravity improvement turns the gravity upside down and makes us fall to the top of the map. All the other things are still affected by regular gravity – boxes, bombs, and slimes all fall down still, with the exception of a magnetic type of box, which falls upwards along with us. Gravity improvement adds a massive change to the gameplay, because we end up needing to add an extra dimension into our strategy, that we no longer need to place boxes to be able to jump to unreachable places (as we can simply fall onto the ceiling and get to where we want from there), but we have to then be aware of other hazards, such as spikes hanging from the ceiling. 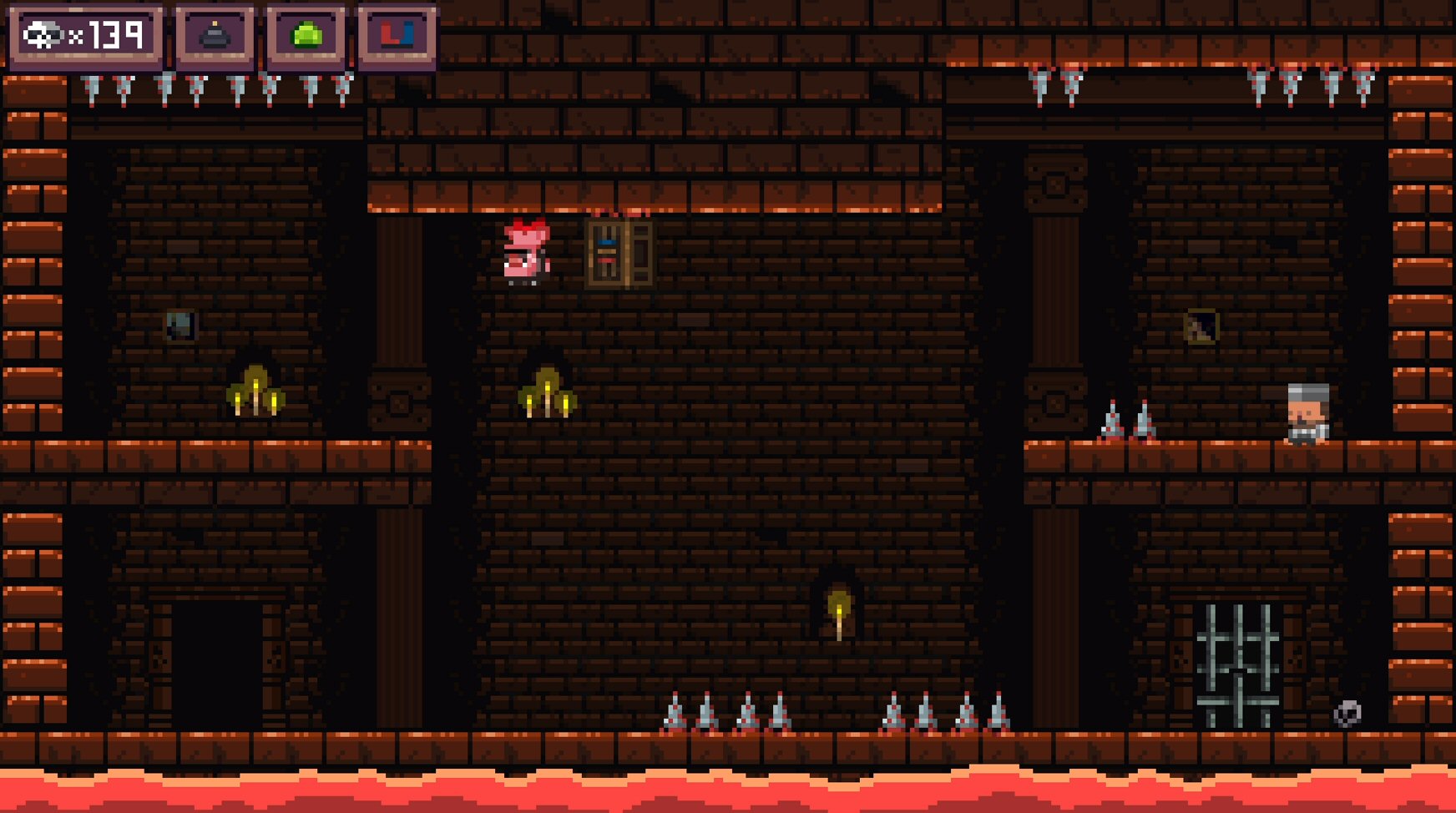 Generally, the game plays like you’d expect and is a nice tribute to old-school games, but there are a few little annoyances and odd design decisions. The jumping can sometimes feel a bit stiff, and on some occasions, you need to be a bit pixel-perfect with how you make the jumps as the game doesn’t seem to have any coyote time mechanic, so at times you end up not making the jump that you think you should’ve made.

Another odd thing was that touching the sinners in any way other than landing on their heads just insta-kills you. Not sure what that design really adds to the game. I understand this for the sinners who walk, as it forces you to dodge them and aim your jump correctly, but not sure why this was implemented for the sinners who are simply sitting. 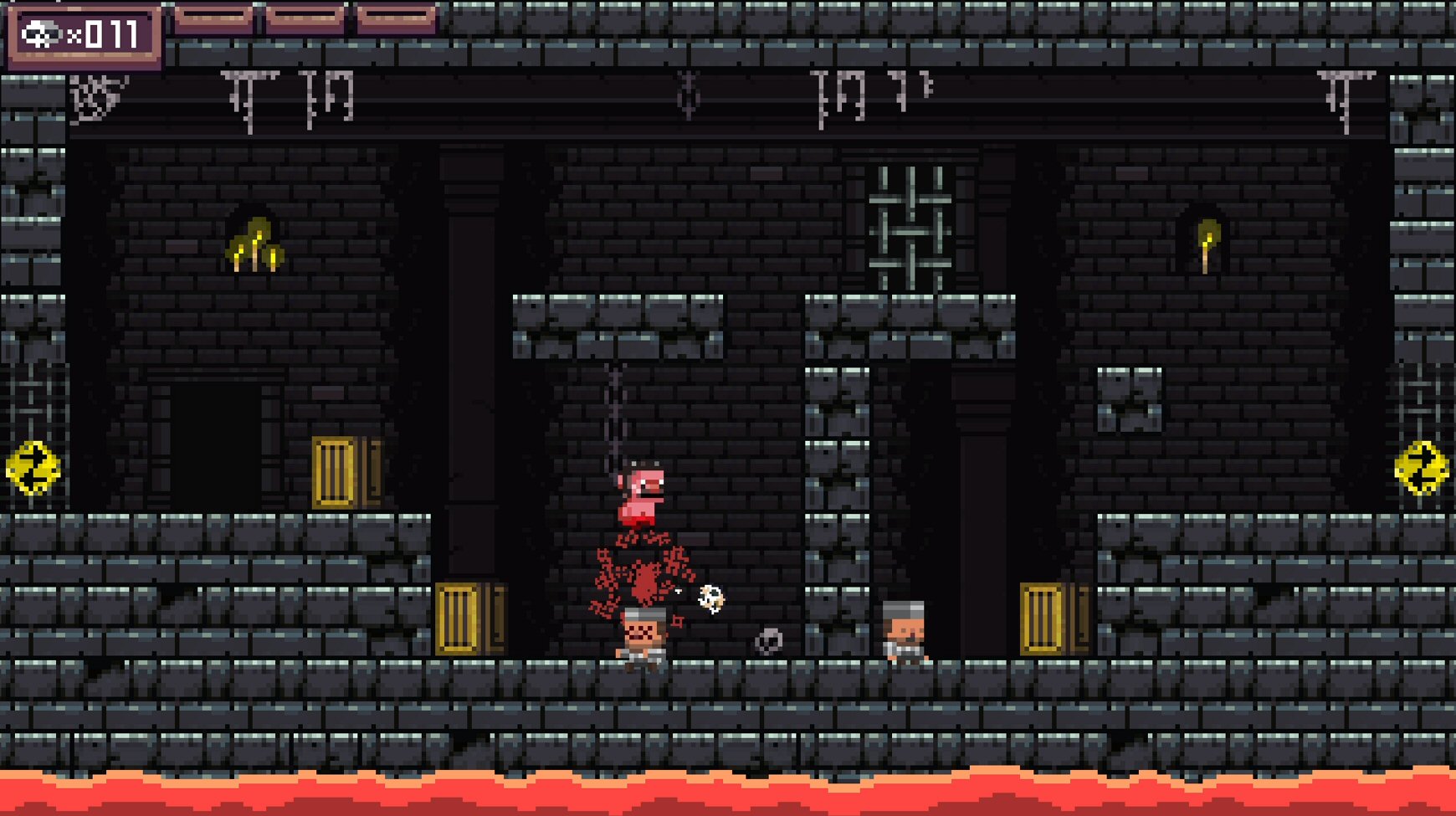 There are also a couple of boss fights in the game. They are essentially rebellious sinners who don’t want to be taken in, so they just throw something at you repeatedly. One of them throws bottles at you in an arc, and the other one throws knives. For a puzzle game where you need to take time and think ahead, this is a rather unusual change of pace, because for these fights you have to be fast on your feet, even though they are not exactly hard, as you can figure out their pattern quite quickly.

Another aspect that changes pace, but which is done very well, in my opinion, are the minigames. On a couple of occasions, in between the puzzle stages, the game gets us to try out a couple of minigames. The mini-games are somewhat simplistic – one is basically akin to pong and the other is akin to Space Invaders, but despite the simplicity, they are quite fun and I think having more of them would’ve been a very good idea. 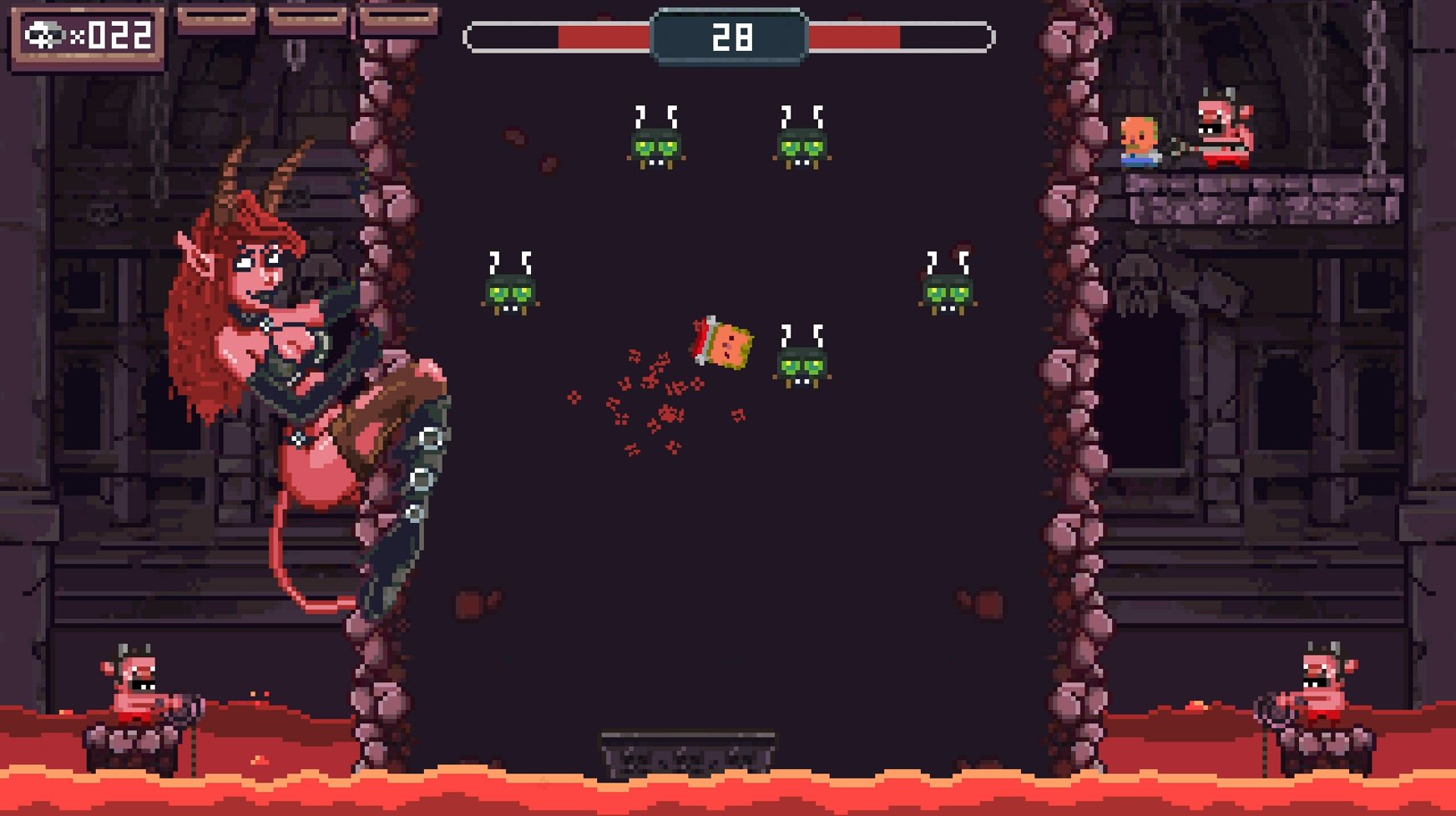 It’s an old-school style presentation through and through. Had this game come out in the 90s, it would’ve fit right in with other old-school games. The pixel style is pretty nice, although quite simple compared to many other pixel art games coming out nowadays. The characters are quite blocky-looking for example, so, it’s not exactly pretty, but it’s functional for the purpose of the game. There are occasions of a more detailed pixel style, mainly of the hot female empress of the underworld who appears on title screens, minigame screen, and a few other places.

The music is pretty nice throughout. Even though the game goes for the old-school style visually and mechanically, in terms of music, it doesn’t use chiptunes, and the music is quite smooth on the ears. It doesn’t stick out or distract us from the puzzles, but it’s pleasant and fitting to the underworld setting. The sound effects, however, do use old-school sounds, such as the jumping sound or the bomb explosion.

The name of the game is a little strange and forgettable, and the game doesn’t really offer a story or anything of that sort. So, it’s a bit minimalistic in its approach. 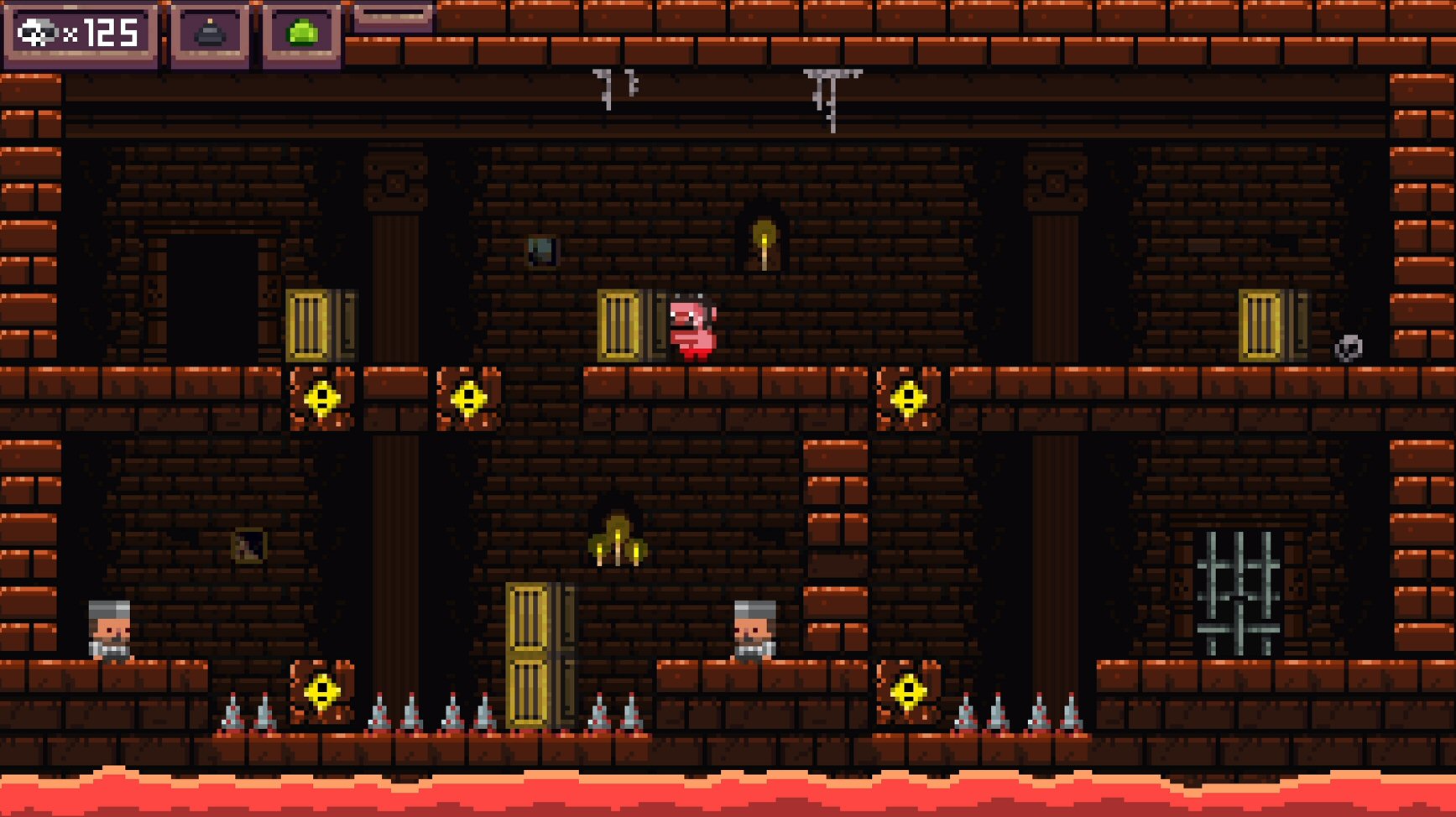 ‘More Dark’ is a nice little puzzler. It’s pretty short and will likely only last you an evening or two, but it manages to accomplish what it sets out to do. The puzzles all get us to think and plan our solutions carefully before execution. New mechanics are introduced after every few stages, so the solutions to puzzles constantly change as we make progress, and there are nice minigames present too as a change of pace. It has a few questionable design decisions, but no major flaws really. I think the main drawback really is that it’s a very short and minimalistic game, and once you’ve done the 30 puzzle rooms, there’s nothing else to do.

I think the devs should easily be able to build upon this concept for their next game that could have a lot more content, more enemies and hazards to deal with, and possibly even a story mode. I think that will certainly be something to look forward to.