A new aesthetic content pack for an already immersive strategy game, Stellaris: Lithoids Species Pack is a solid addition if you’re the type that likes that kind of thing.

Let me start this review by saying that I’m a customization and immersion addict when it comes to my favorite strategy games and I jump at the first time to pick up new content. I can’t get enough whether it’s a new category of species portraits or traits in Stellaris, new culture-based character portraits in Crusader Kings II, or new factions in Civilization or Endless Legend. Expansions are fantastic but even smaller DLC can make my month if it’s done well. As such, I was looking forward to the Lithoids Species Pack as soon as it was announced and I can say that it has exceeded my expectations but that’s not to say that it hasn’t also brought along a few complications that any other fans of Paradox Interactive games have come to expect with a new release.

No, I’m Not Going To Use Rock Puns 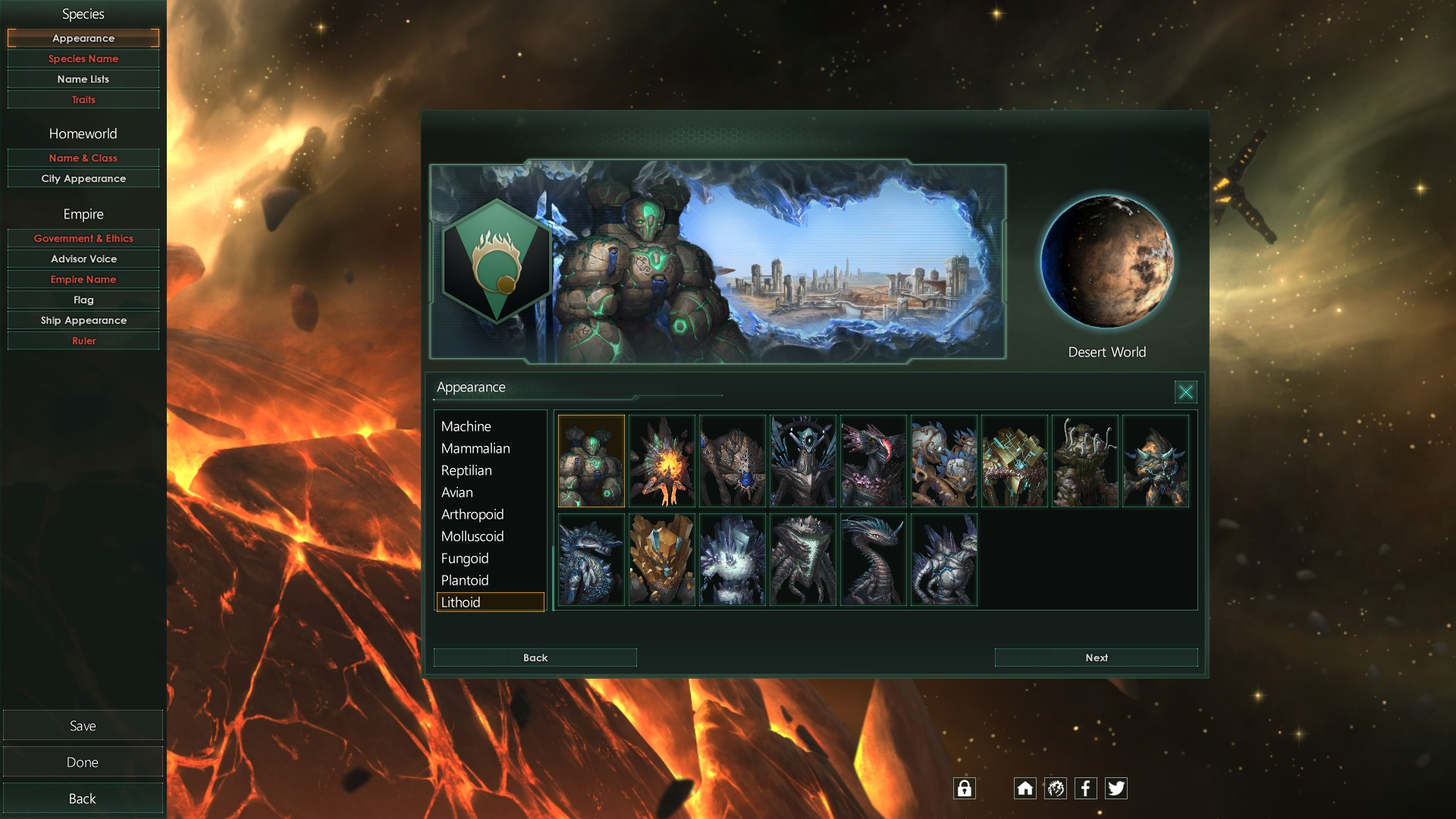 The selection of lithoid species portraits is up to the quality that we’ve come to expect from those that have been added to Stellaris in the past. There are a few that I think are great, while others aren’t bad, though as you can imagine, this is highly subjective. What really makes this species pack stand out from those of the past is that the lithoids come with a unique trait of their own that they have attached to them no matter what other traits you choose.

The ‘Lithoid’ trait offers a fairly significant departure from the base mechanics by requiring these species to consume minerals instead of food. This drastically changes your priorities when designing your species as well as redirects the focus of your empire as the game progresses. Without food being a requirement, you have a wider range of options to pursue but you’ll need to double-down on your mineral production or your citizens will begin starving all the same.

Outside of your starting population devouring minerals, your lithoids will gain a fifty percent bonus to their ability to survive in challenging environments of all kinds and their military on the ground has its health increased by that same amount; these are hearty bonuses before you even factor in that their leaders have their life expectancy boosted by fifty years. The key flaw that they bring is that their population growth is reduced by twenty-five percent which is quite drastic, particularly if you plan on expanding across the universe and have to populate your territories quickly. 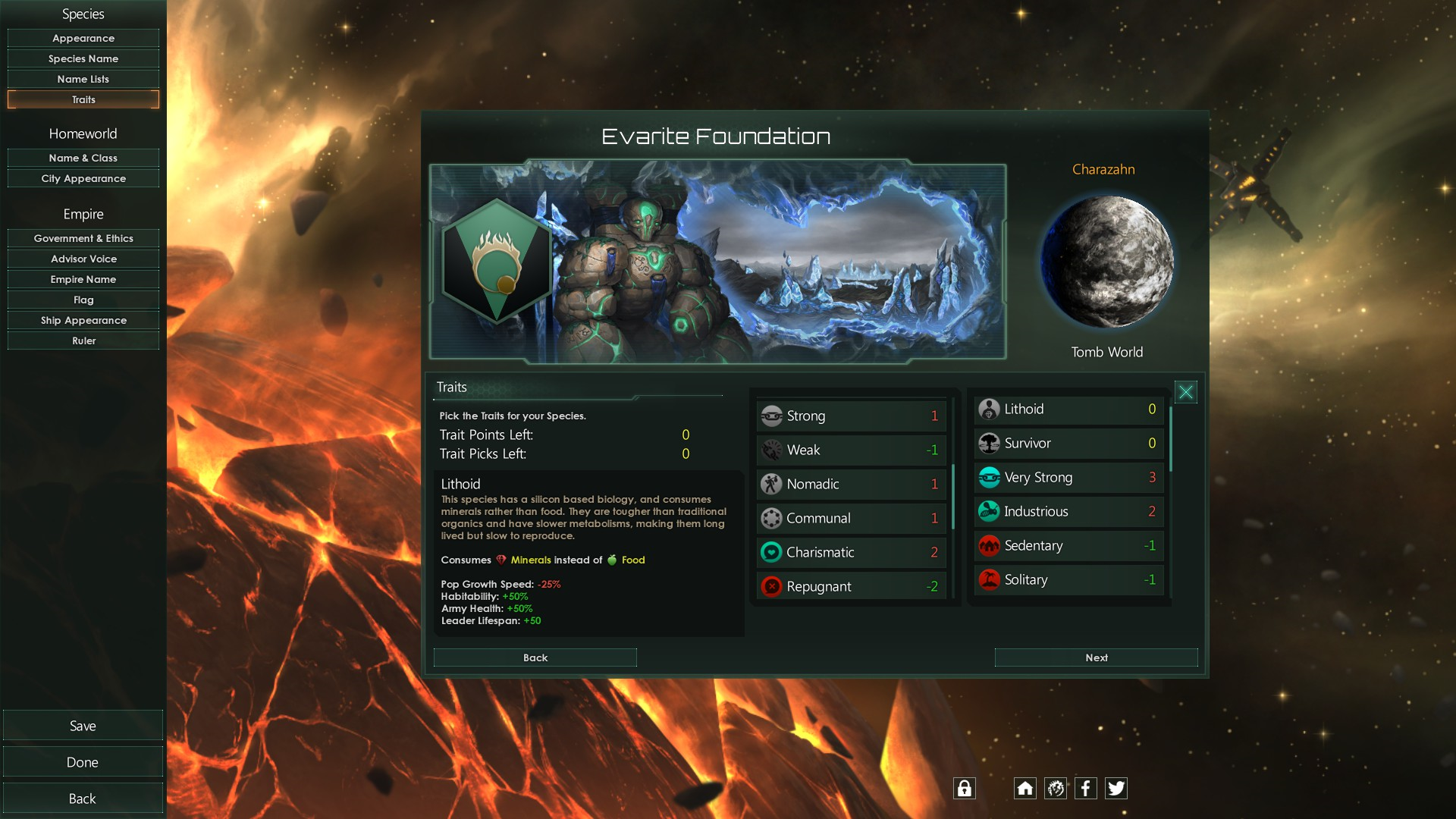 From Clean Slate To Refined Species

I chose the burly gentleman that you can see selected in the first screenshot above and decided to go all-in on the roleplaying aspect that has always been a focus of the title. I began to carve my man-boulder into shape with traits that would bring it into line with my vision. This meant that I absolutely had to pick up the ‘Very Strong’ trait to allow my burly stone gents to be as burly mechanically as they were visually and added the ‘Industrious’ trait to boost their production of minerals so that my mines would continually be supplying the resource that was the clear lifeblood of my empire.

After determining the strengths of my species, it was time to nail down its flaws. ‘Sedentary’ made sense due to my thoughts of them being slow-moving and particularly fond of staying in their location of origin, making it more expensive to relocate their pops and reducing the speed of their migration. ‘Solitary’ was another easy choice for me, not necessarily because I thought that they did not prefer to be around others, but because in my head the ten percent increase to housing required for the population represented complications from their size. Fleeting was a third choice, for no other purpose than to balance out my trait points, though it only chopped a portion of the life expectancy bonus from the innate ‘Lithoid’ trait.

Finally, for some added spice, I chose to make them have a background of survivors. This gave them a significant bonus to their habitability rating on tomb worlds and started the empire off on a large tomb world that had been destroyed by catastrophic wars in the past. 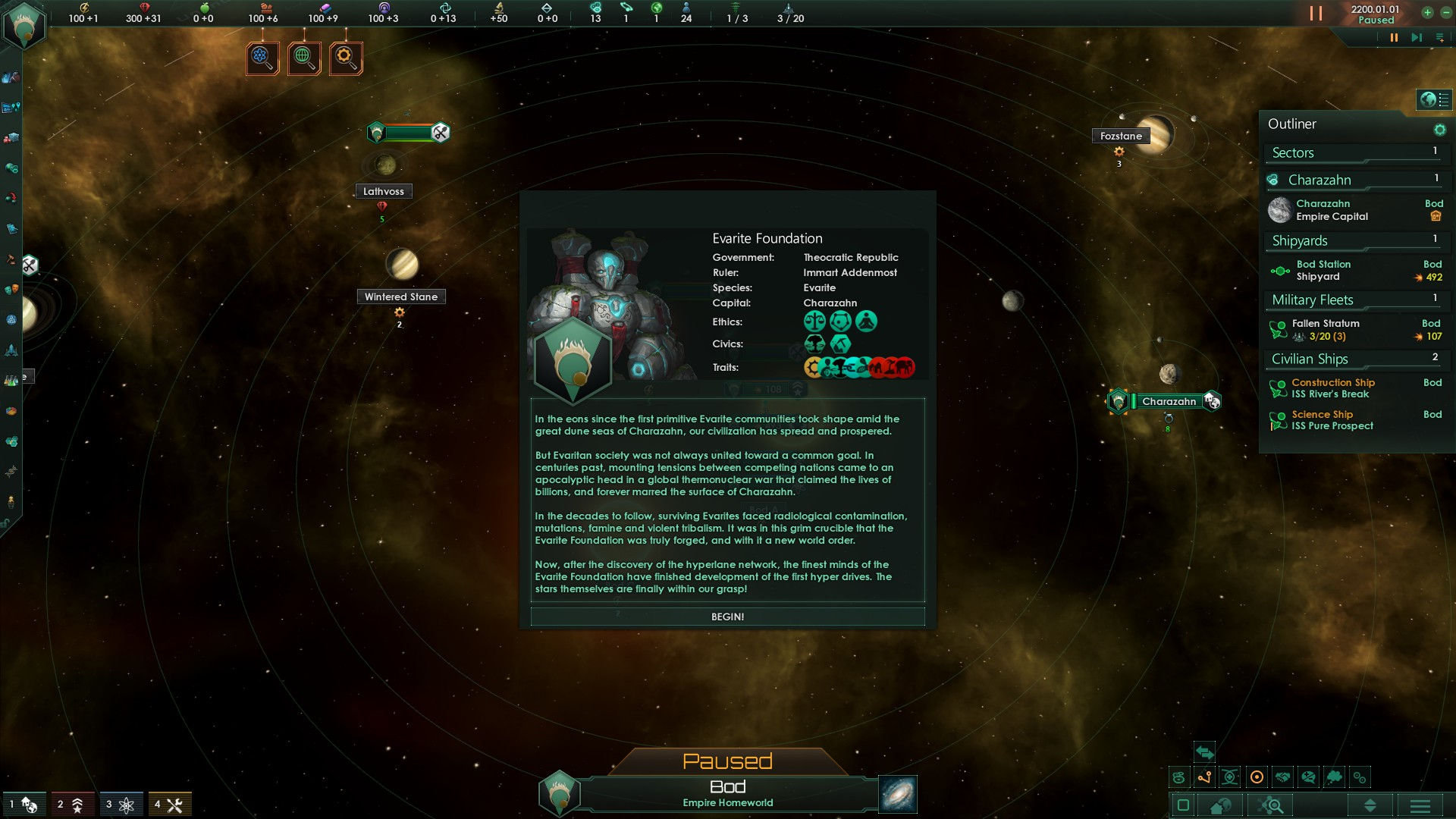 The Stellaris: Lithoids Species Pack is a small DLC release that offers a variety of aesthetic choices connected to its theme including species portraits, a new ship design, and a voice pack that can be applied to any empire’s advisor. The innate ‘Lithoid’ trait is certainly an interesting change of pace and one that I could see having fun with in the future depending on the type of empire that you’re playing. However, it’s important to realize what this DLC is before you purchase it; this is almost entirely an immersion pack that some of us (like me) will find a lot of enjoyment in while others will feel that it’s a waste of money as there isn’t much in the way of mechanical substance to it. You’ll also want to be aware that, as per usual with Paradox Interactive DLC, if you’re picking it up right out of the gate there are a number of bugs that come along with it. I’m sure I’m not alone when I say that fans of this developer have come to expect this, though and I would say that they’ll be fixed within a couple of weeks if the pattern is the same as extensive past experience would suggest.

As for me, this pack was enough to whet my apatite for yet another Stellaris campaign while keeping me on the edge of my seat for the upcoming Stellaris: Federations expansion and, as always, I’m looking forward to further development of the game!