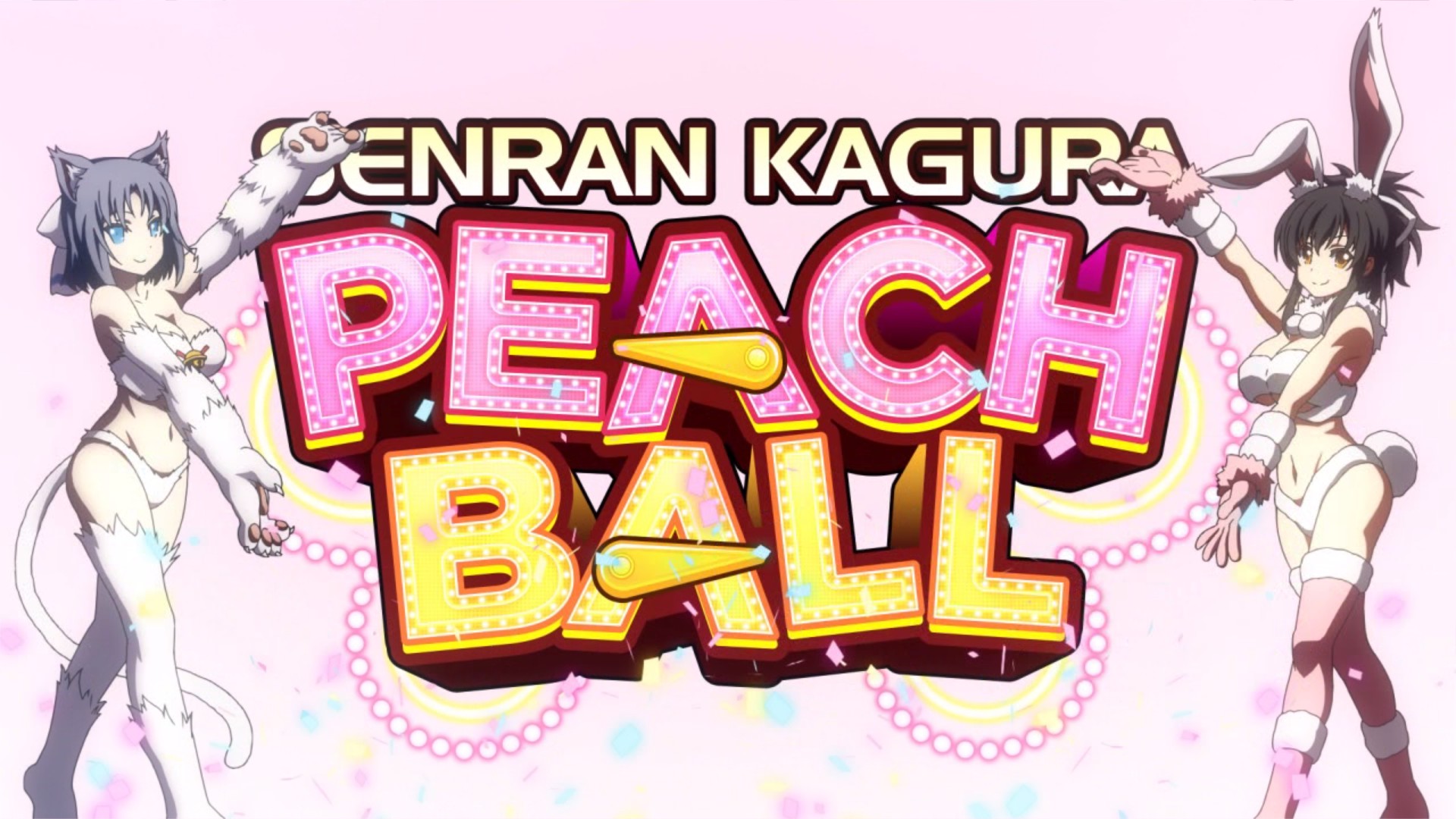 Why yes, pinball and large-breasted half-beast ninja girls do mix!

SENRAN KAGURA: Peach Ball is the latest “buxom shinobi” game to hit Steam, thanks to the wonderful minds at Tamsoft, XSEED, and Marvelous. It’s another departure from the beat ’em up style of the first games in the series, this time giving fans the opportunity to drop one of the five scantily clad ninja girls onto a pinball table.

It’s all for a good cause, of course. You see, Ryona has accidentally encountered one of Haruka’s concoctions — Beastall — turning her into a dog girl. Even worse, everyone she touches is also transformed into part beast: Yumi-cat, Murasaki-bear, Asuka-rabbit, or Yomi-tanuki (Japanese raccoon dog). The only way to change them back is to coax them onto a pinball table and use a “peach ball” on them: an enchanted pinball that vibrates at just the right frequency to disrupt the beastly magic.

Yes, it’s as crazy as it sounds, but this is SENRAN KAGURA after all!

Yes, it’s hard to think of a less ninja-like game than pinball, but we’ve had cooking and water pistol fights in the series, so I can’t even pretend to be surprised. What is mildly surprising, though, is that at its core, at least, the pinball is actually quite normal. 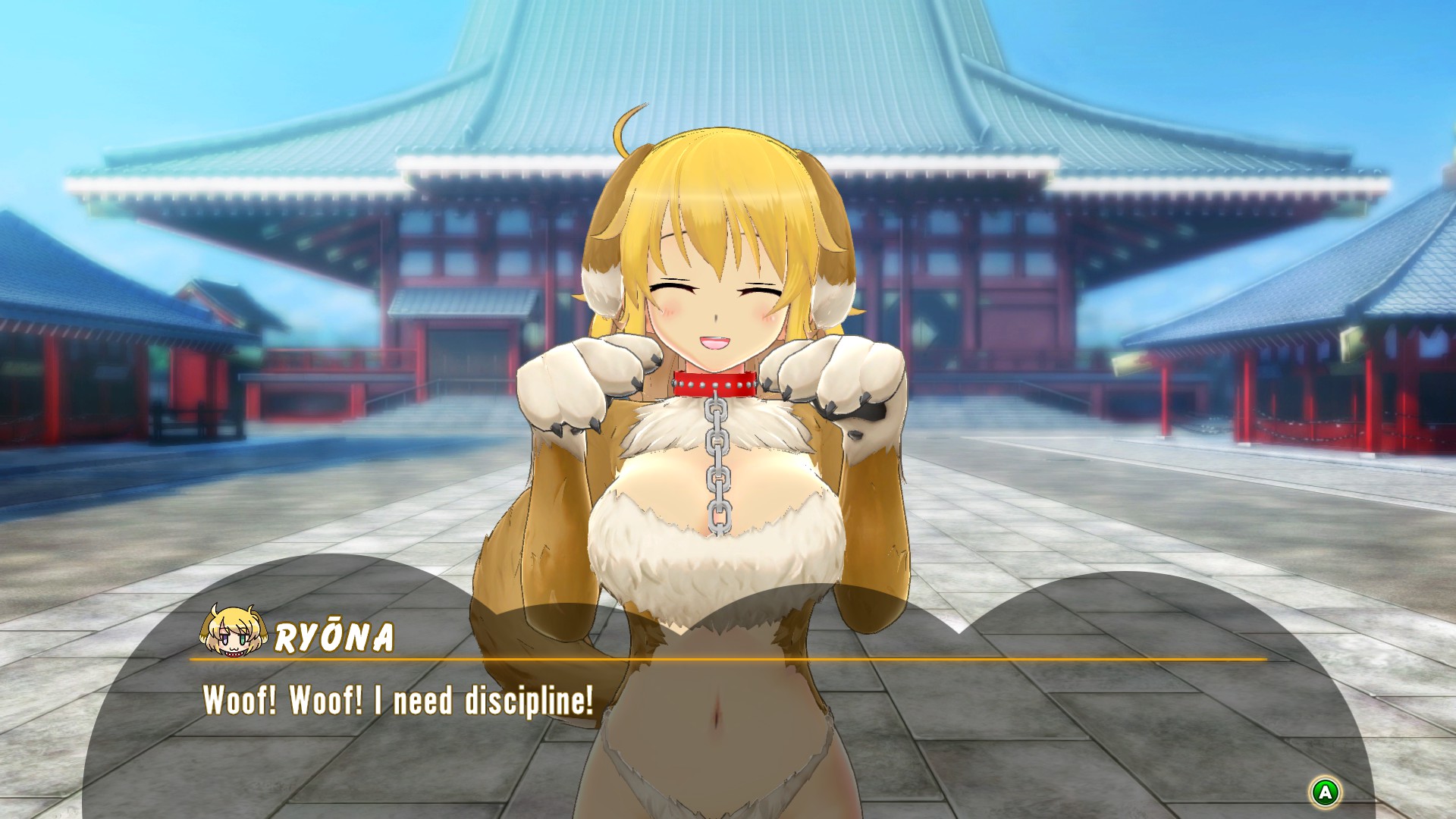 The game only features two tables, which is a shame, and both of them play reasonably similarly, even down to including some of the same elements on both tables: the Bebeby Kick loop and the Lukahole, for example. Both tables are well designed, though, with multiple targets for both left and right flippers, and a secondary right flipper further up on one of the tables providing a bit of variation. They’re only single level, but both tables feature multiple mini games reachable through hitting various targets or loops in succession.

Of course, it wouldn’t be SENRAN KAGURA if it were just normal pinball, so layered on top of the core pinball gameplay are a number of enticing minigames. 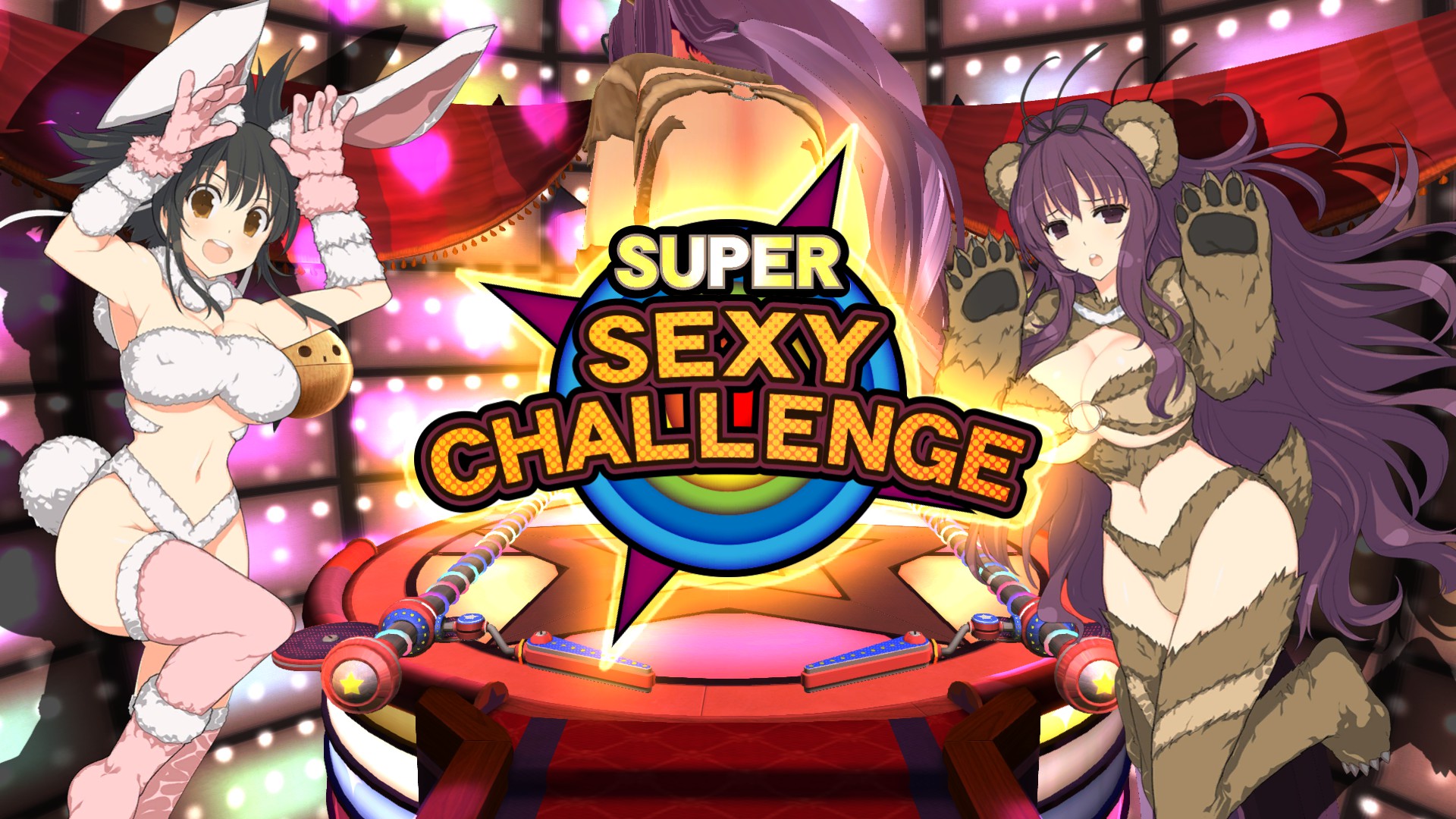 Each level places one of the five beast-shinobi girls at the head of the pinball table. Your goal is to earn Peach Points by fulfilling various missions: hit this target x times, go through that loop, bop the girl herself with the ball y times, and so on. Earn enough Peach Points and the area in front of the girl starts flashing, indicating that it’s time for you to tackle a Sexy Challenge: one of a number of randomly chosen pinball-style minigames played on separate little tables. These minigames are all very similar, involving two balls with which you try to hit one or more targets, earning as high a score as possible in the short time allowed.

The third Sexy Challenge on each table is always the Super Sexy Challenge: a minigame where the girl places her breasts or buttocks on a mini pinball table and you flick pinballs at them. The minigame then changes to actually flicking the target body parts directly, vibrating the peach ball nestled there until it explodes, changing the girl back to her human form. 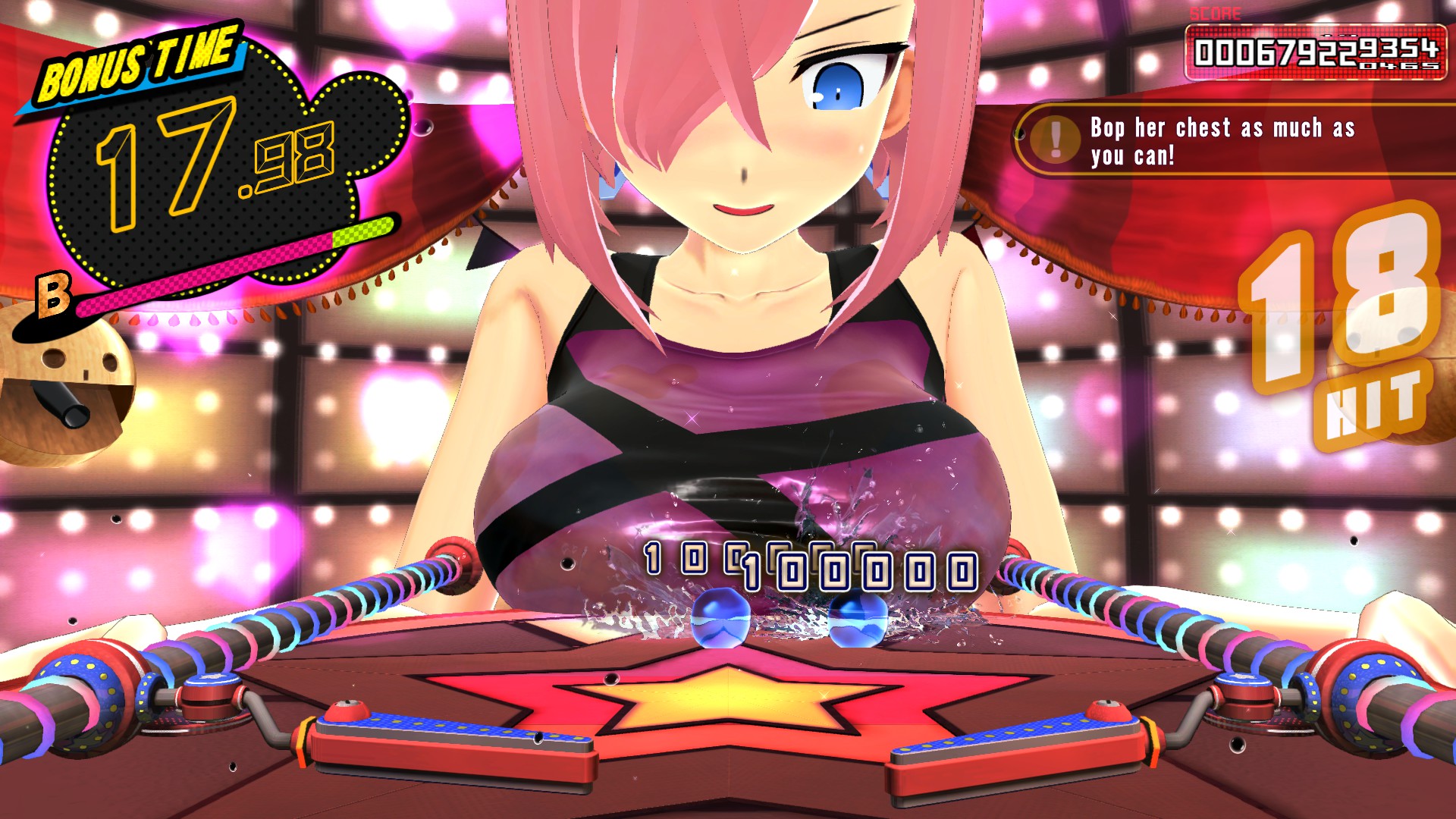 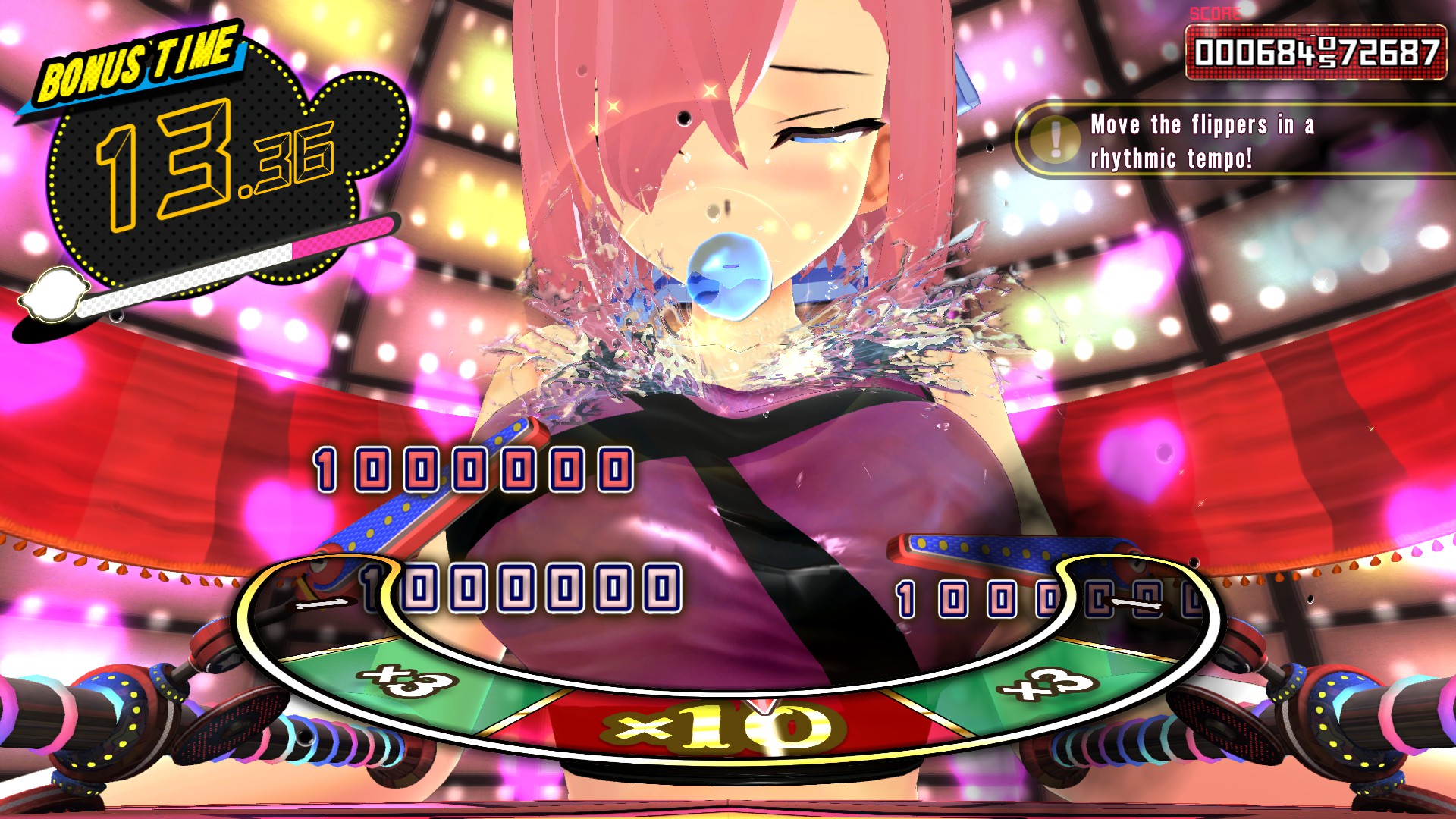 All of this is wrapped up in two game modes: Story Mode and Free Mode.

Story Mode is just what you’d expect: choose one of the five girls and play through five missions focused on her attempts to free herself and the others from the Beastall’s effects, with each mission featuring the normal visual-novel style scenes before and after the pinball for that mission. You’re also given three in-game goals for each mission — bop the girl 30 times, hit five fairies, earn 5 million points, etc. — but these are the same for each girl’s story.

Free Mode is just the pinball: choose a table, a girl, a background (if you’ve unlocked any), and away you go: earn as high a score as possible until your pinballs run out.

What about fan service?

SENRAN KAGURA games traditionally have a lot of fan service. The previous entry, Reflexions, could even be described as being only fan service, as it took the series’ stand-out pervy mode — Intimacy Mode — and made a whole game out of it. While Peach Ball retains that mode (woot!), it returns to the series norm by making Intimacy Mode only a side mini game; you can complete the entirety of the main game without even visiting the dressing room if you so desire. (But really, why would you!?) 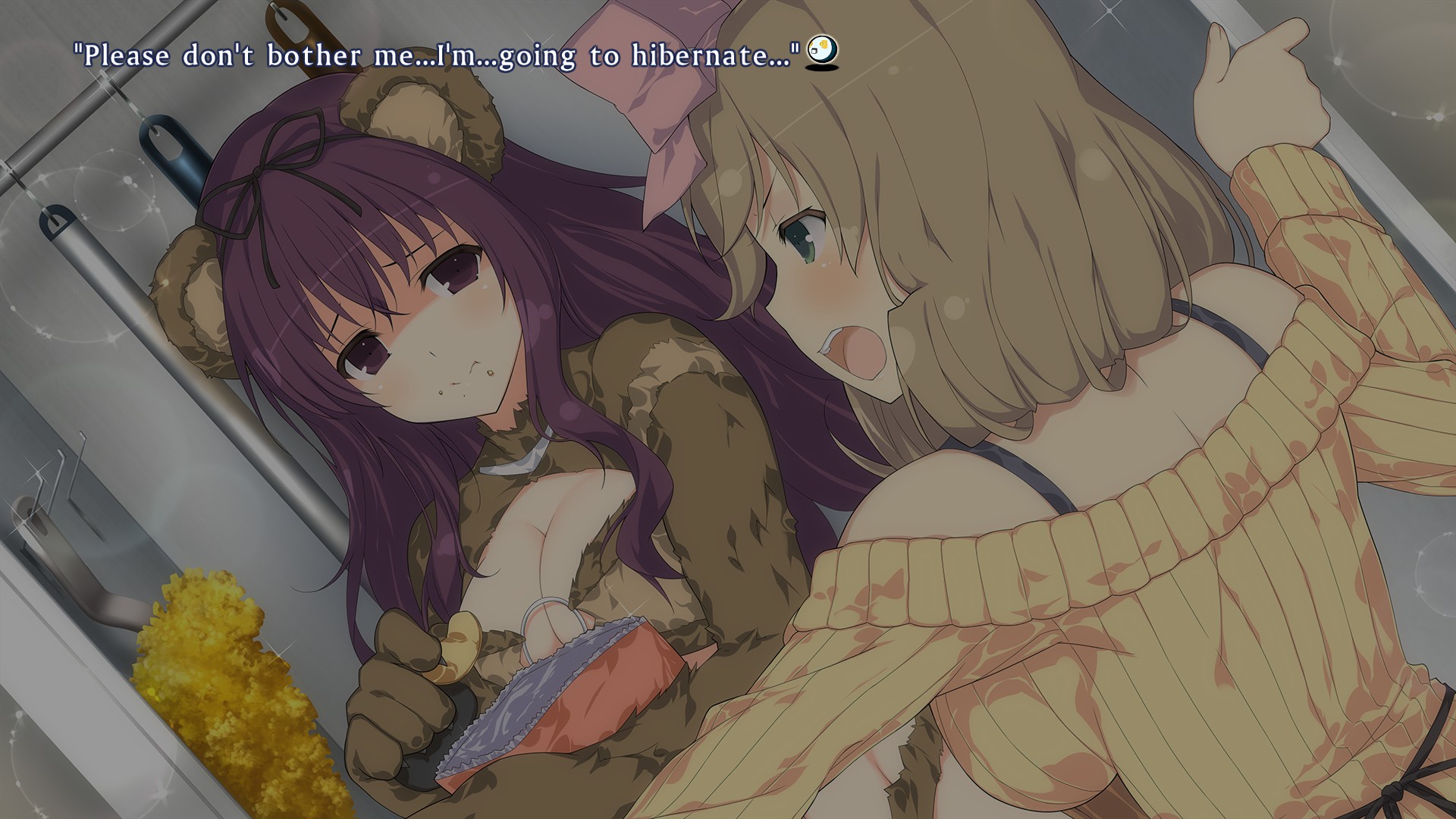 The usual Diorama Mode is included, too, allowing you to pose and position the five included characters in a number of poses. This has been enhanced slightly with the inclusion of placeable objects, such as any accessories you have available. Placement is a bit fiddly, but it’s a nice addition and I’d like to see it included in all future games in the series.

These modes are all accessible from the Dressing Room menu, where you can also choose an outfit, lingerie, and accessories for your shinobi girls. There’s only a small range of each of these available, unfortunately, but more can be unlocked as you play through the Story Mode missions and complete goals, or get lucky in Free Mode and encounter a Secret Sexy Challenge. Even then, the range is a bit limited, though DLC is already available to unlock more. Chosen costumes and accessories aren’t used in Story Mode, though, as the story assumes the girls are in their beast outfits. In standard fashion, the in-game shop lets you spend the Zeni you earn from playing to purchase unlocked outfits, accessories, images, music, and videos. 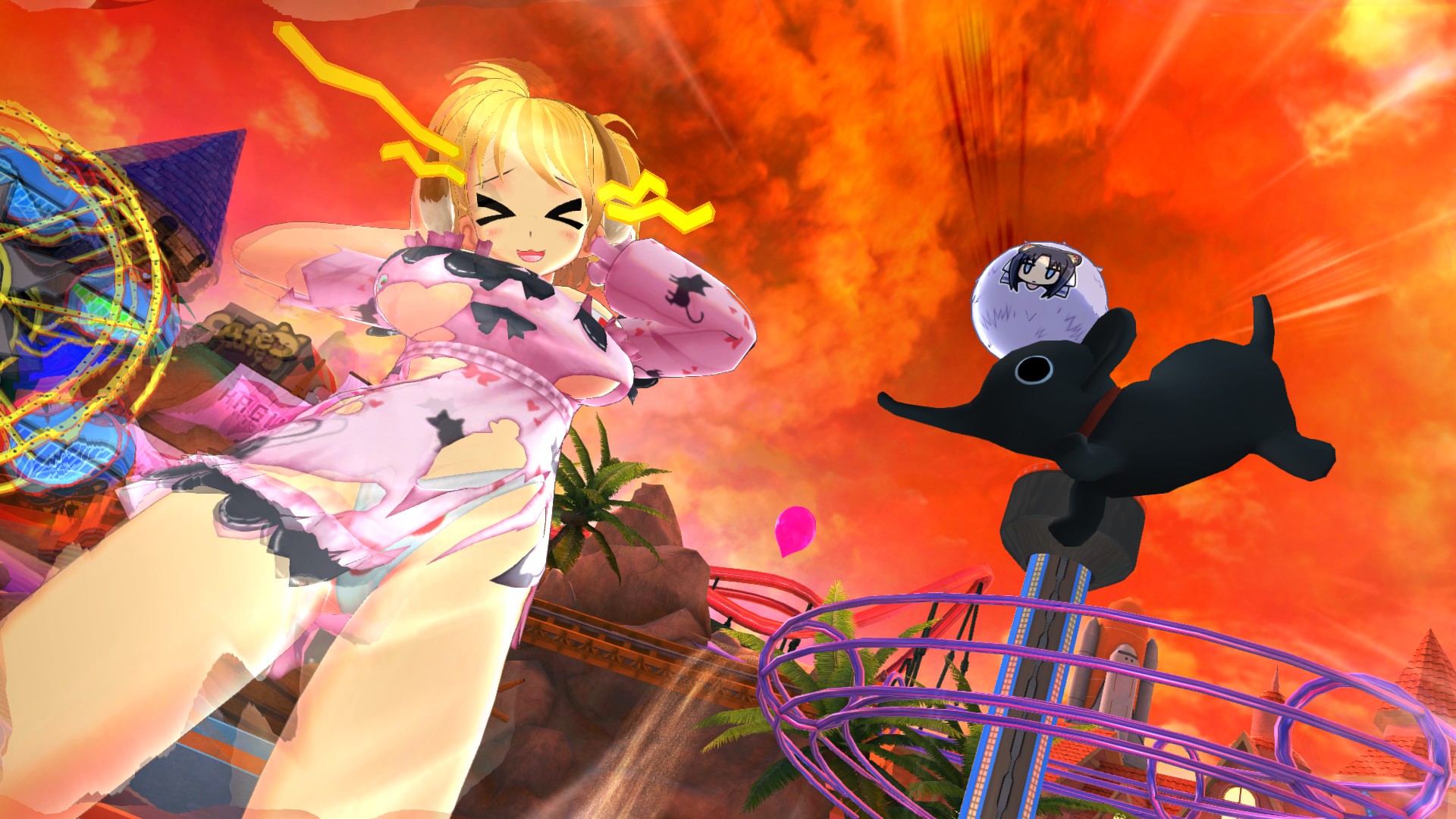 On top of all of that, there’s the pinball itself. The Super Sexy Challenges are entirely fan service, but even the normal pinball can be titillating, especially in Free Mode where you can choose the girls’ outfits — which can, as usual, be tearable or transparent when wet.

Graphics are continually improving in the SENRAN KAGURA series, and they do look great here, too!

The girls are modelled and animated exceptionally well, with each beast girl having a few different animations when on the pinball table, and falling into a couple of different positions when knocked over. Wet clothes look suitably glossy and the jiggle is a sight to behold. 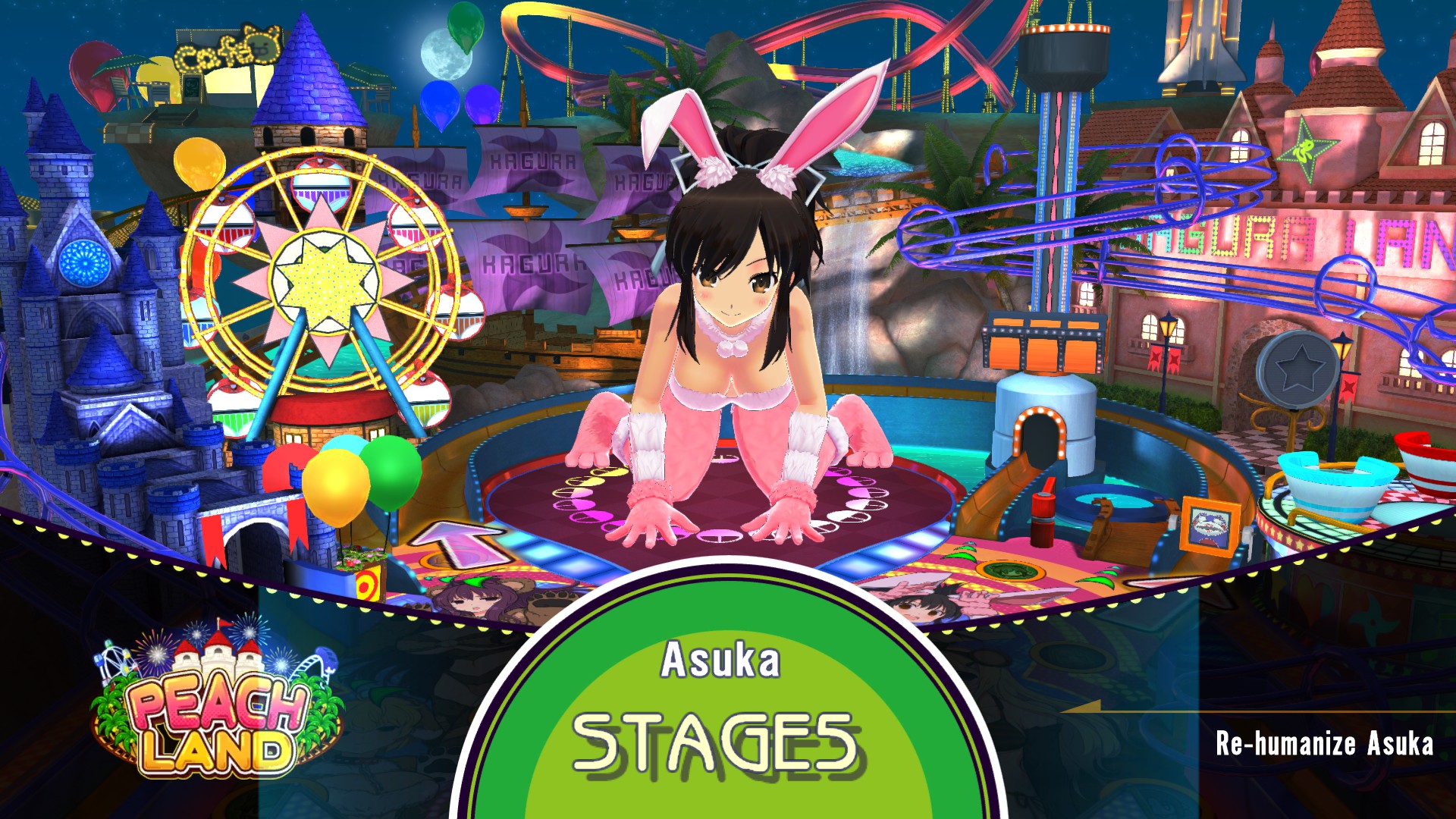 The pinball tables are great, with two themes: Peach Land is like a theme park, while Spooky Shinobi Park is more like an abandoned temple. They’re covered in flashing lights and have plenty of fancy effects, too; at first I found it a bit overwhelming — in fact, I still do on occasion, especially during Hustle Time. It’s such a shame that there are only two tables, though!

Music and sound are well produced and exactly what you’d expect for a SENRAN KAGURA game. There are plenty of pop-ish music tracks and the girls are fully spoken, including voice-over from one of the girls as you play, commenting on your progress.

The UI is consistent with the series and pinball control is very simple: trigger buttons for the flippers and sticks to nudge the table in any direction — there is no tilt, but keep an eye out for the girl’s reactions. There are also plenty of unlockable balls, which may make minor differences to the ball physics, but are mainly cosmetic.

Performance is great on my three-year-old gaming laptop. I did find one issue, though: I don’t think there’s any way to see the goals for the current Story Mode mission while you’re playing a table. It’s not critical, but it’s a small oversight in a near-perfect interface. 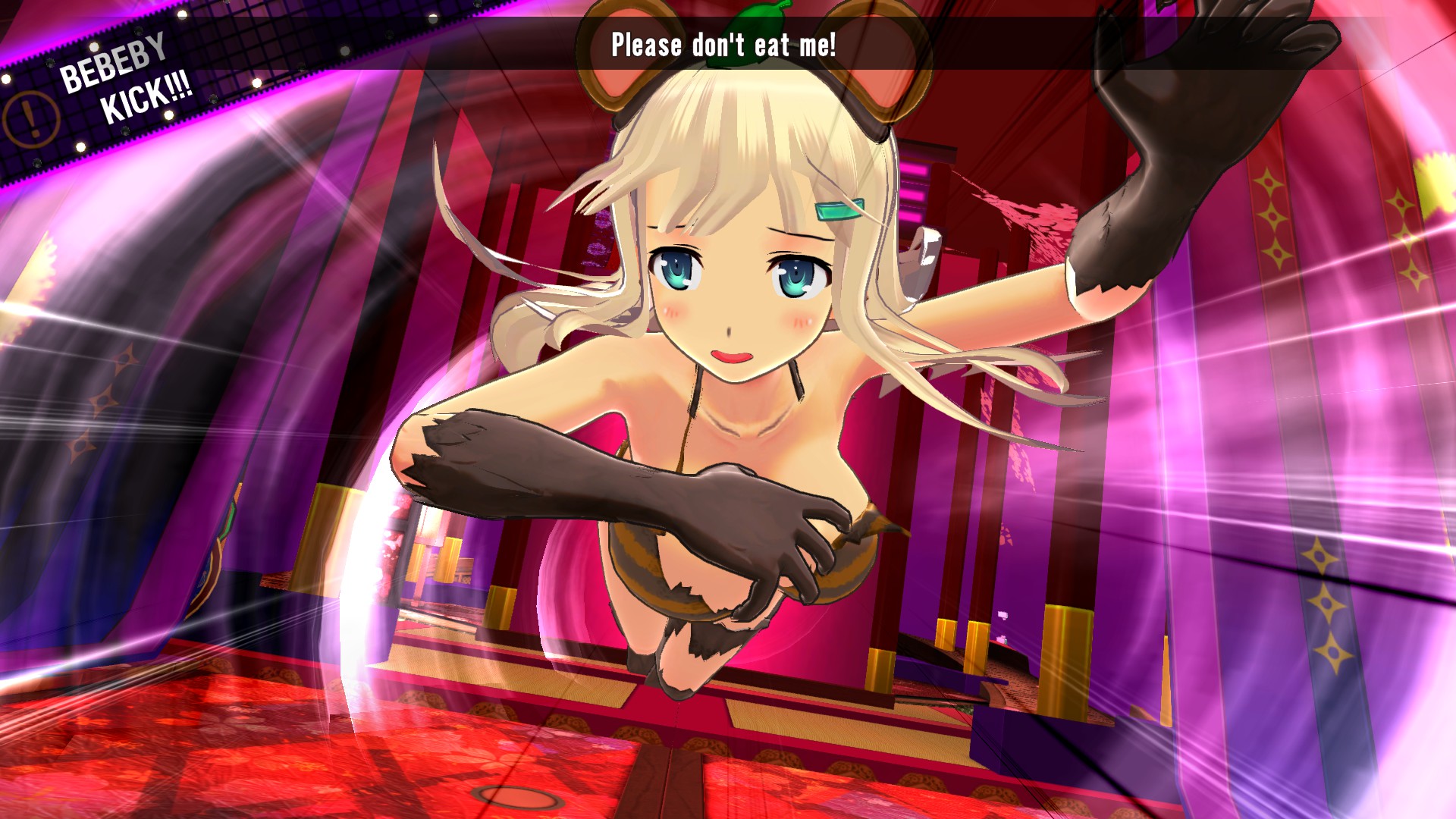 While SENRAN KAGURA: Peach Ball is easy to recommend, I had a hard time deciding on a final score. On the one hand, it’s the most fun I’ve had playing pinball. It’s crazy and hyperactive and full of the usual SENRAN KAGURA fan service, and it’s very well made. But on the other, it’s also rather expensive considering it only has two tables, and six characters (one of whom can’t be played).