Indulge in some playful S&M with Ryona or watch Ice Queen Yumi fall in love with you!

Senran Kagura: Reflexions is the latest masterpiece of anime-style buxom shinobi titillation to grace the Steam store, from the clever clods at Tamsoft, XSEED, and Marvelous Inc. I recently reviewed it here, recommending it to fans of the series.

Reflexions focuses on a single character: Asuka. While I was pretty happy that my favourite character was the one chosen, I was even happier to discover that four of the 21 Steam launch-day DLC for Reflexions was character DLC, offering purchasers the chance to play with Yumi, Yomi, Murasaki, and Ryona.

Since each of the character DLC adds to the base game in basically the same way, albeit with a different character, I thought it best to review all four together here.

Each of the character DLC provides the character herself, at least one hairstyle for that character, and a group of clothing and accessory items. While the versions I was provided for review don’t include all of the outfits and accessories as selectable items in the Dressing Room, I’ve been reliably informed that they are normally fully selectable, the same as if one purchases the separate Outfit Set 1 (free) and Outfit Set 2 (paid) DLC packages for that character, I believe with all of the Outfit Set 1 items being available immediately after installing the DLC. (ProTip: Don’t buy the Outfit Set 2 DLCs if you think you might want to buy the Course DLCs as well!) Also unlocked immediately is a gallery image for each character.

After starting the game you can choose from your available characters from the main menu, by moving left or right on the gamepad controller. There are no new modes, but each character has her own Reflexology Mode story, involving the same gameplay as with Asuka in the base game. Glorious Reflexology techniques and Pause and Secret Menu options need to be unlocked per character, so starting Reflexology mode with a new character is like starting a new game.

Completing a story arc with a DLC character unlocks a second gallery image (these are rather tasty). After that I’ve not had anything else unlock until I completed all story arcs with a character, at which point a third image is unlocked. The gameplay and stories are basically the same as Asuka’s story, with the only difference being the character, with each girl’s personality being further developed from what we’ve seen before in the series, and adding her own flavour to the story. Each girl’s story takes about the same amount of time as the original game: about three or four hours.

The new characters come with some new outfits and scenes, as well as sharing some of these with the other characters. Asuka had seven scenes: idol, sports, schoolgirl, bed time, gift, tutor, and warrior. Combined with the five different feelings, these made for 35 short visual-novel style sequences. Each new character has the same number in the same pattern.

The first DLC shows Yumi — normally something of an ice queen, both physically and emotionally — in a more approachable light. Her initial unlocks include her prim and proper Gessen Uniform, while her character arc scenes are the hot springs, nun, masseuse, newlywed, island castaway, festival, and sister. 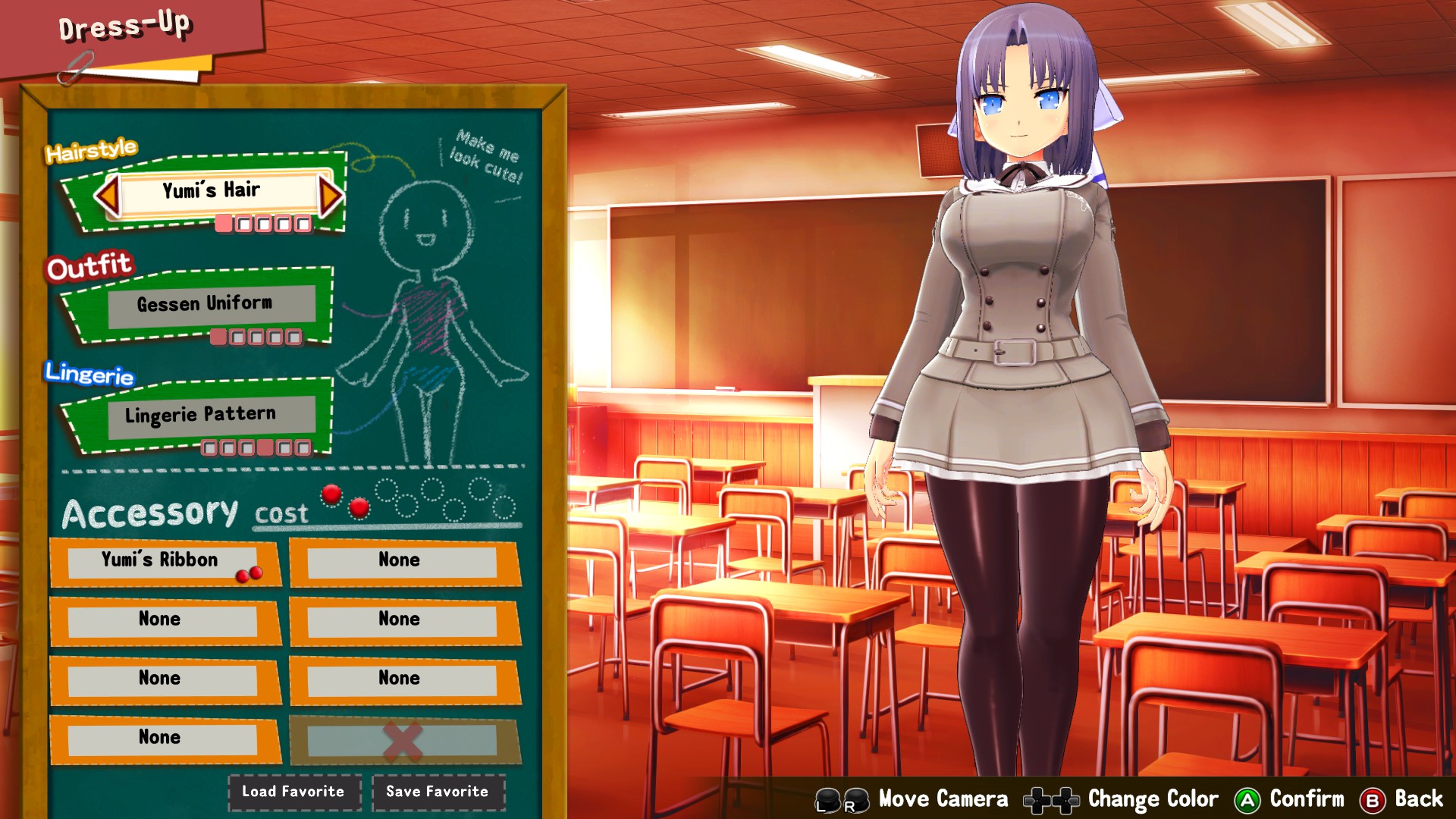 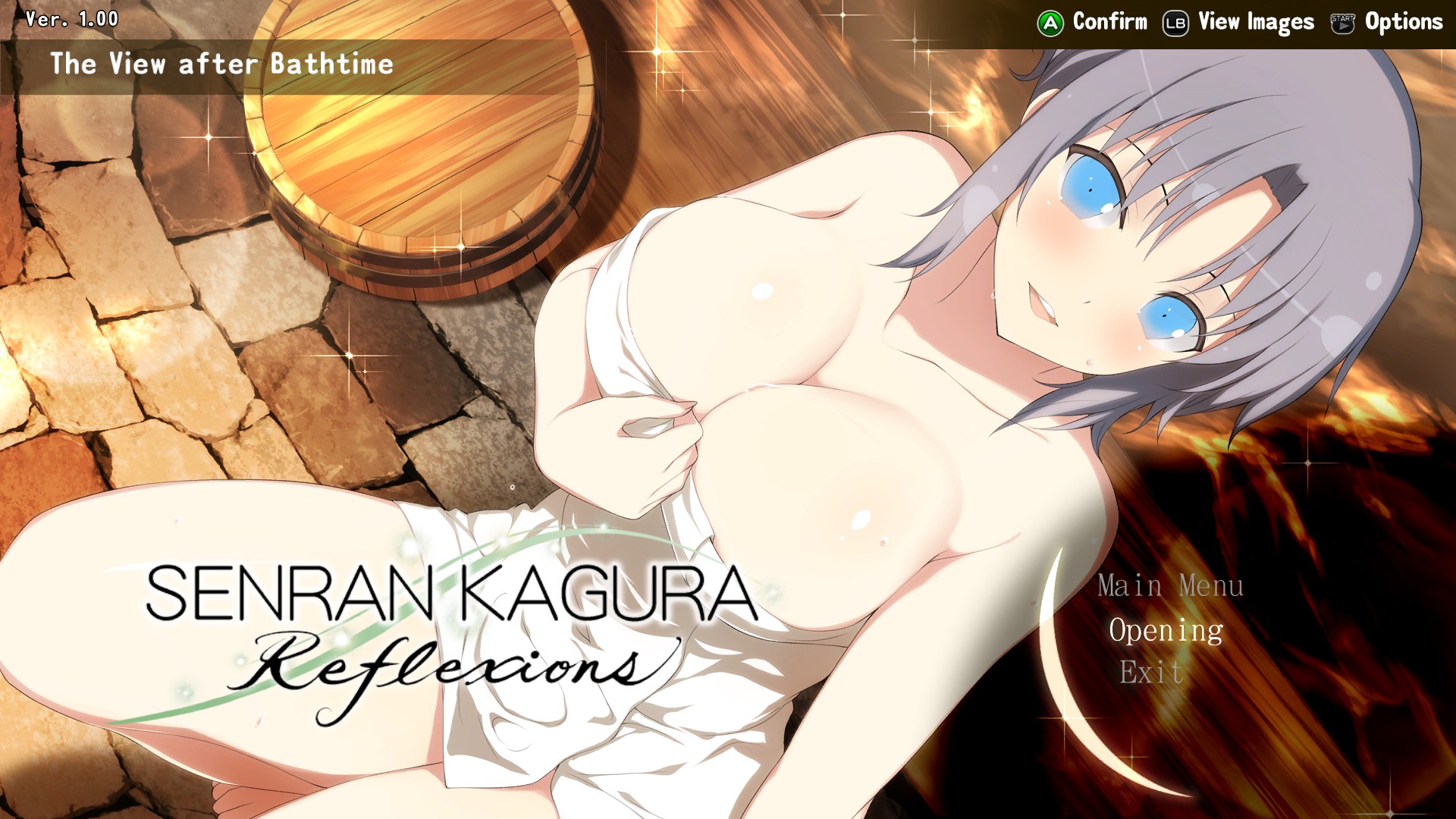 The second DLC features Yomi: beansprout aficionado and expert in wild grass cuisine. Her initial unlocks include her sailor-style uniform as well as some alternate hairstyles, beansprout mask, and her battleaxe. Yomi’s scenes are the kind teacher, new idol, classmate, nurse, sister, adventurer, and couple.

Yomi always seemed to me to be more of a sort-of background character to the series than many others, so it seems a weird choice to have included her as one of only four DLC characters; surely Homura would have been a more obvious choice. Her story is nice, though, and it’s good to spend a bit more time with her. 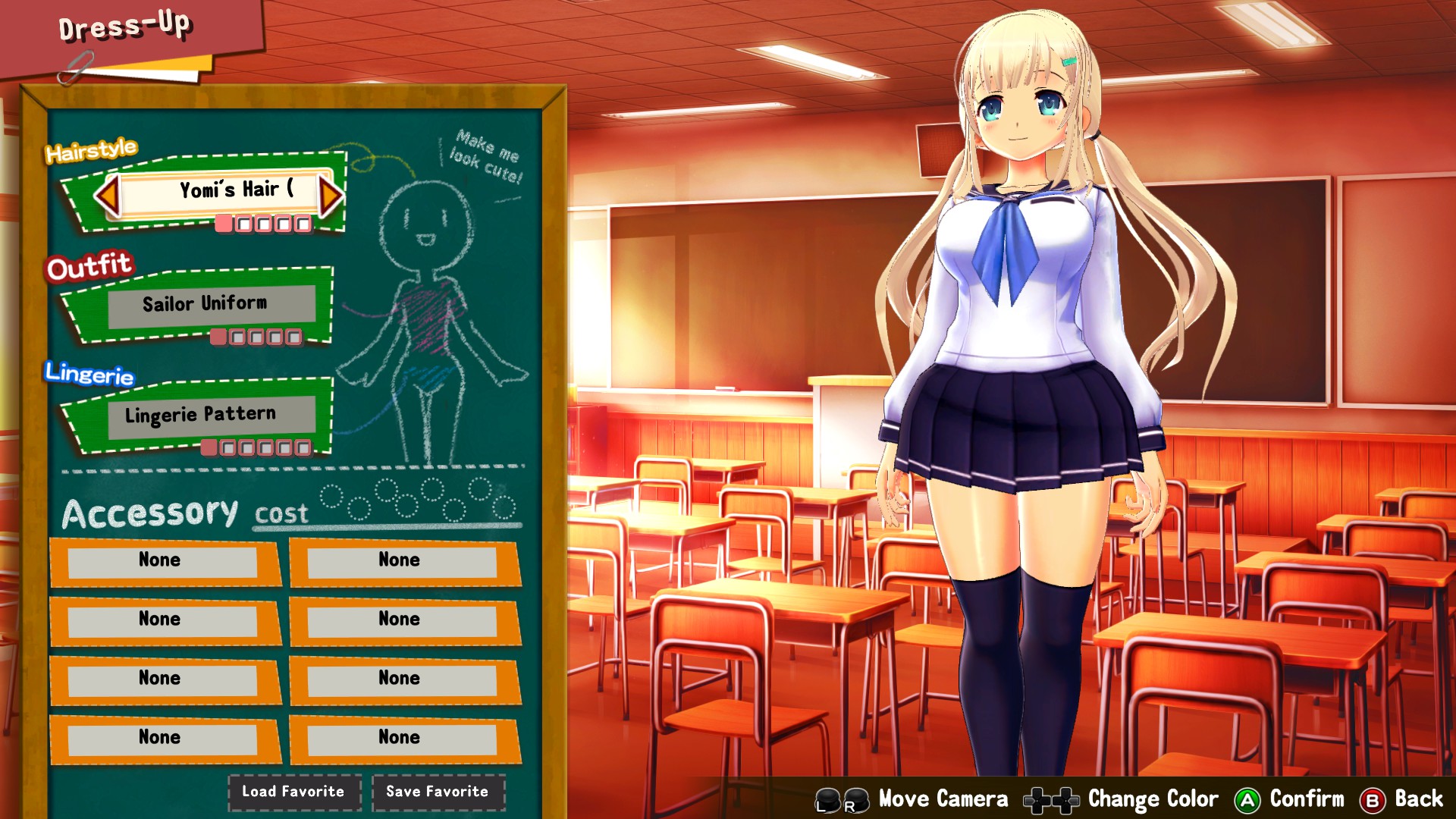 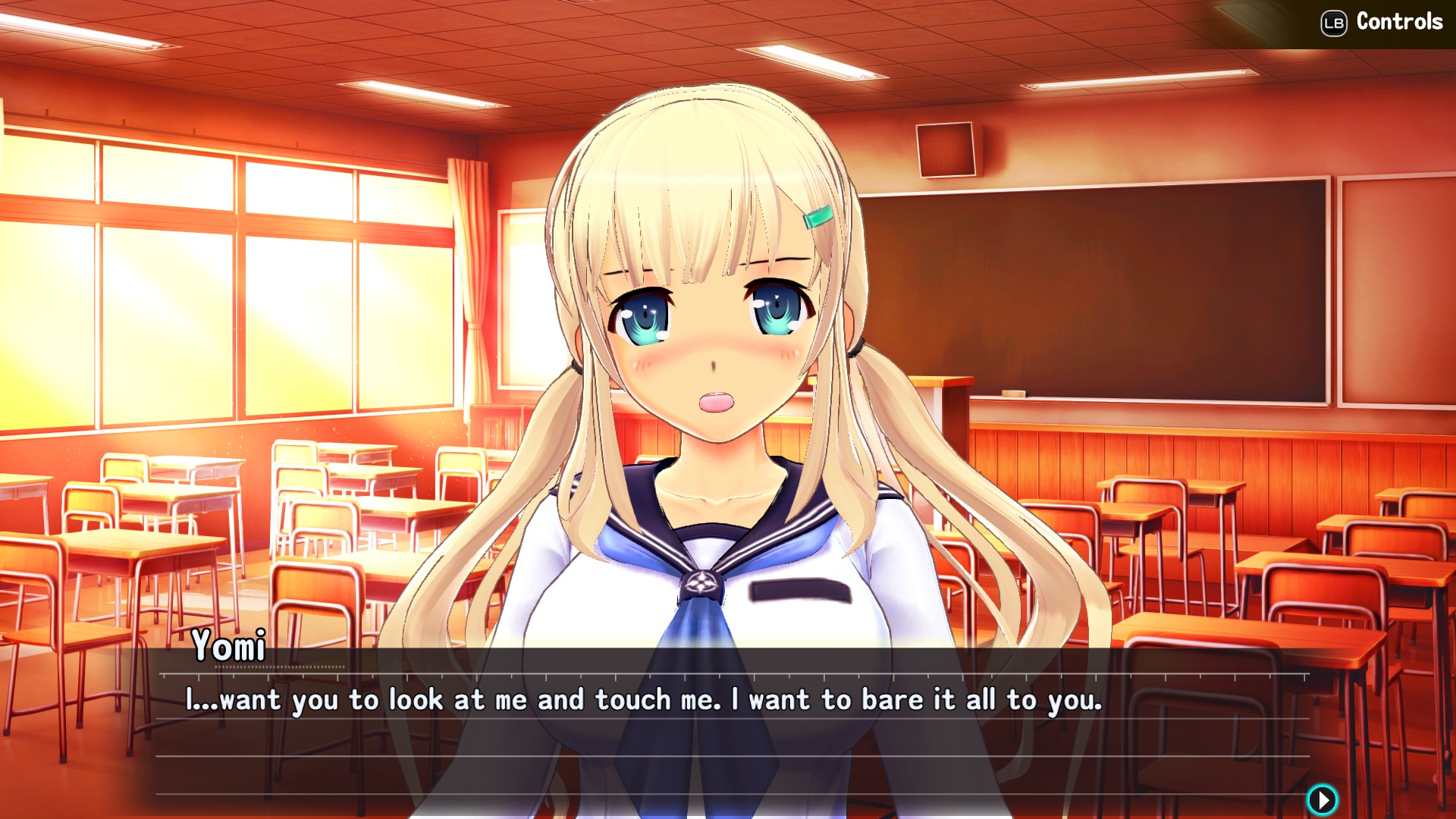 The third DLC focuses on Ryona, the beautiful masochist of the group. Her trademark short uniform is unlocked from the beginning, and her petite devil outfit is truly a sight to behold. Ryona’s scenes include the succubus, tutor, infirmary, spy, couple, club junior, and woman warrior.

Hahaha! Ryona is the highlight of the DLC collection for me. She’s as nutty as always and had me laughing from the start. I may be imagining it, but it seems to me as though some of the normal blue (aggressive) massage locations turn red (love) for Ryona, which is a nice touch if it’s true. Her voice is fantastic, as always. 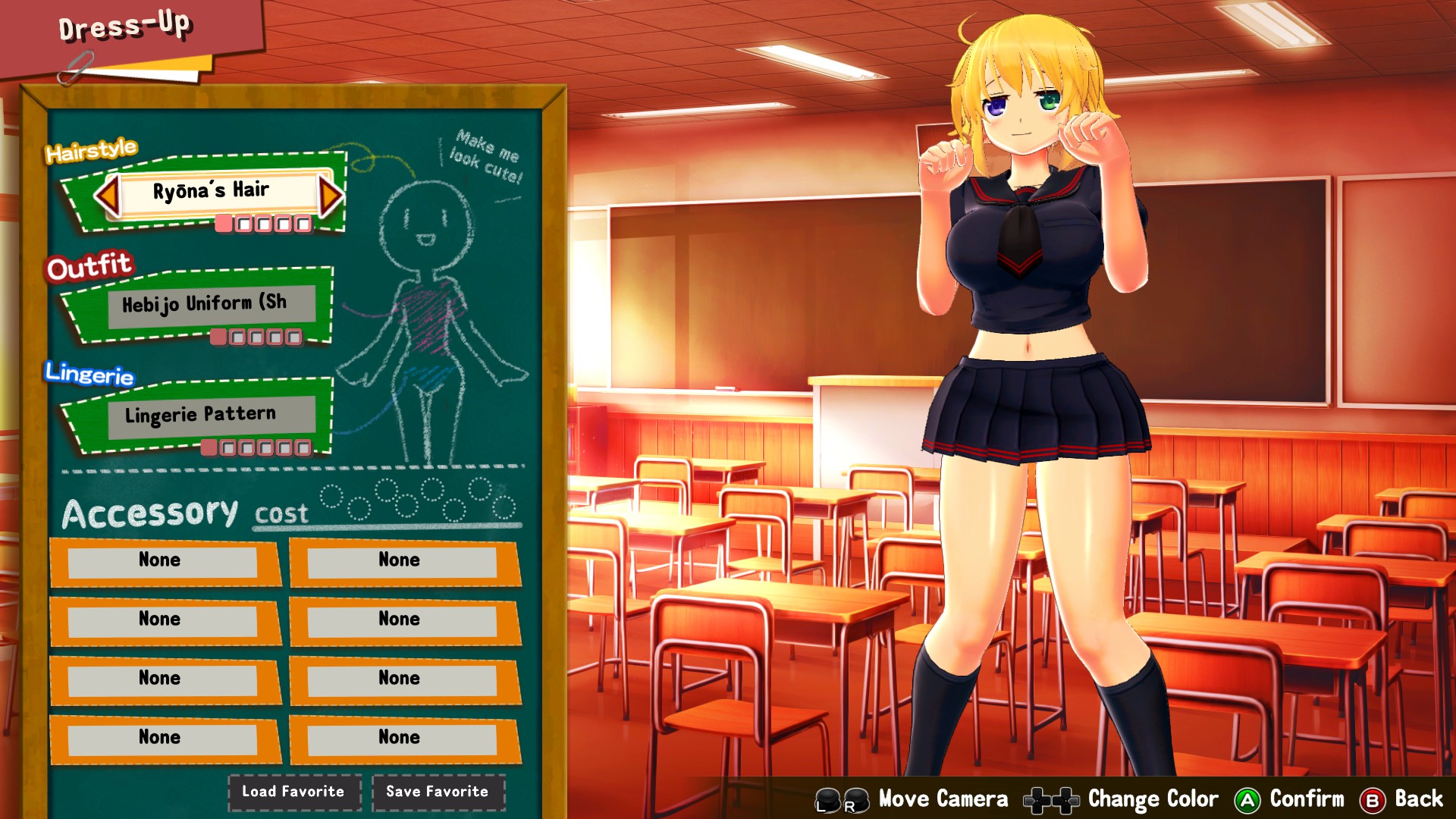 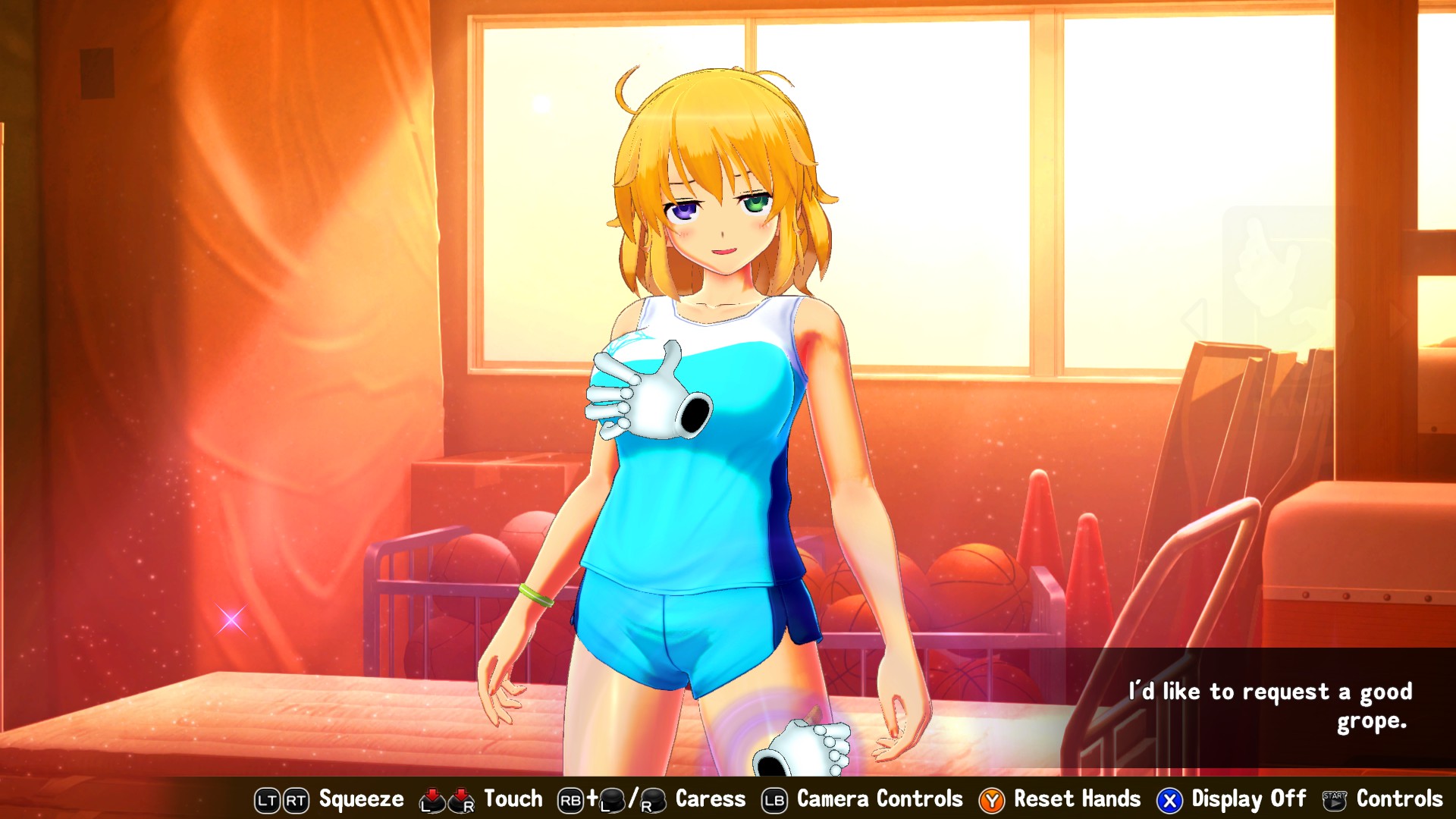 The final character DLC features Murasaki, the super-shy gaming nerd / shut-in. Her initial unlocks include a giant Bebeby. Her scenes are the senior student, explorer, sister, new idol, evil boss, nurse, and magical girl, with the magical girl being the highlight for me.

Murasaki is another unexpected choice for inclusion in such a limited selection of characters, but her story is sweet and she’s exceedingly cute. 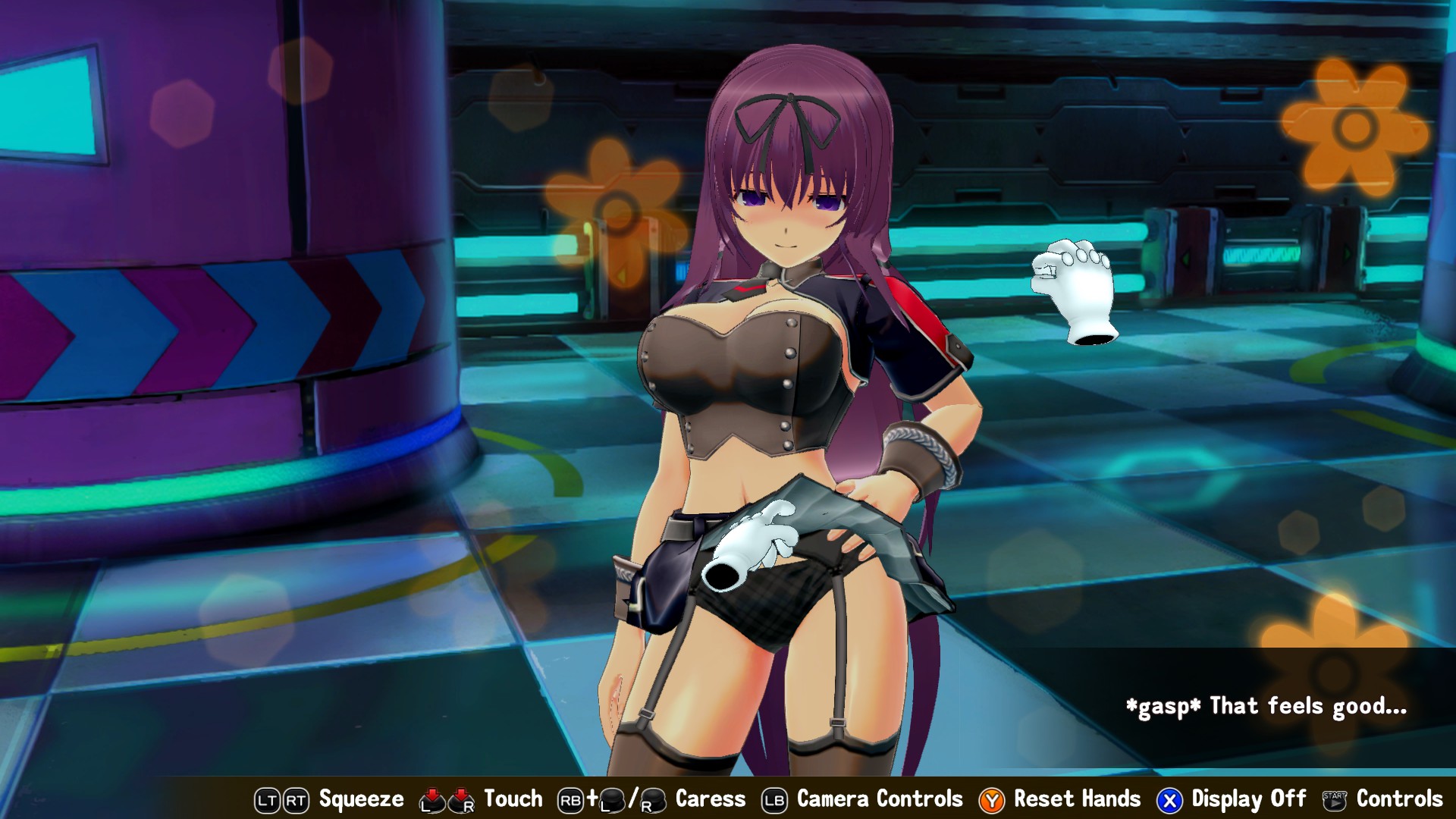 As I mentioned earlier, the versions I was provided only included the character courses and not the outfits and accessories. I’ve also played with the free Outfit 1 DLCs installed, so I’ve tried to describe what’s unlocked initially based on that, but adding the Outfit 2 DLC or the full Course + Outfit DLC may unlock more initially, especially if you’ve already completed the game with Asuka.

The new outfits are mostly excellent, though, with Ryona’s Petite Devil / Succubus outfit being my favourite, hands down. I haven’t yet had a chance to see all of the others, as some of them aren’t actually used in the story arcs for each character. For the most part they’re returning from earlier Senran Kagura games, so if you see one of your favourites mentioned in the DLC outfit list you can be sure you won’t be disappointed.

A big benefit that comes from owning the DLC is that now all five characters are available in Diorama Mode. As with the earlier games in the series, I haven’t found a way to pose duplicate characters (five Asukas in different costumes is a bucket-list item for me, after all), but returning to the previous games’ five-character dioramas really adds to a feature that felt a bit lacking in the base game otherwise.

The new gallery images are very nice, but with the expanded number it would have been great to have the game randomly select one for the title screen for a bit of variation when starting up the game. There are a few new scenes that, once unlocked, can be used in the other game modes, too, and most of non-swimsuit outfits are tearable. I believe clothes tearing is only available in Mini Reflexology mode, and pre-torn clothes can be chosen in the Diorama; there’s no way to tear clothes in the main Reflexology (story) mode. (ProTip: Using an Xbox 360 controller? Position the hands in likely positions and hold up on the directional pad; if the clothes can be torn in that hand position, mode, and outfit, the fingers will start to wiggle. Keep holding the up button and spam the grab — L2 and R2 trigger buttons — and pretty soon the cloth will be flying!)

For the most part, the Senran Kagura: Reflexions character DLC provides exactly what I expected: four new characters to play with through different flavours of the same story again; a few gallery images; and some new hairstyles, outfits, and accessories. Each character Course + Outfit DLC is priced the same as the base game, but that seems perfectly reasonable to me, since each offers basically the same amount of gameplay.

Ryona is the pick of the bunch for me, so if you’re only going to pick up one extra character, then I’d suggest it should be her. But, really, if you enjoy the game then there’s no reason to not grab (ooer!) all of the characters; they’re all worthwhile, and you can get them with a hefty Steam bundle discount if you buy them all together with the base game, too.