REVIEW: Our World is Ended

Join the members of Judgement 7, game developers extraordinaire, as they try to save the world from themselves!

Our World is Ended is a new anime-inspired visual novel from Red Entertainment and published by PQube. And wow it’s good! (Oh damn; you probably don’t need to bother reading the rest of this review now.)

The story focuses on Reiji, a college student working part-time for Judgement 7, a game development company. The game begins with Reiji walking around a busy shopping street in Tokyo, accompanied by a senior Judgement 7 member, Yuna, who happens to be a high school girl. Reiji is wearing a modified helmet with a camera and smartphone attached to it: the latest prototype of the New World Goggles artificial reality technology, developed by his boss, Owari-san, who is supervising the experiment remotely from the Judgement 7 office, or base as the members like to call it.

As you make your way about the street, performing various tests (and rewarded by Owari-san with some lewd AR filters that only you and he can see — he’s the world’s biggest pervert, you see), the New World Goggles experience a technical glitch and your view of the world — seen only through the goggles’ screen — goes black. It returns shortly afterwards and you’re given a glimpse of the same area of Tokyo after some sort of disaster has struck: empty of shoppers and with buildings crumbling or destroyed. Worse still, you see your friends, including Yuna, crucified against the side of one of the buildings.

Before you’re able to react, a woman approaches and gives you a message: “Be careful… the world… is about to start…”.

The goggles’ screen fades to black once more and when your vision returns you’re back in the busy Tokyo you know, Yuna safe by your side. But what does it all mean?

The interface: truly a work of art

The first thing I noticed about Our World is Ended (OWiE!) was the interface. It’s really cool!

Most visual novels have a static title screen, some static menus and options screens, and a static skinned overlay that sits unchanging on the screen as you follow through the game. While OWiE retains the basic functionality of most modern full-featured VNs — a text box overlaid on paper-doll anime-style characters and static backgrounds, with options like text speed, skip settings, saving and loading, etc. — it manages to make the whole thing look and feel extremely slick indeed!

Menu buttons and option widgets appear as sort of 3D projections over static backgrounds, with the effect made even more convincing by moving the background plane when interacting with the items on screen. Sound effects, often ignored in many VNs, are spot on and independently adjustable volume controls for voice, music, and environmental sounds allow you to take full advantage of them. Music is somewhat typical for the genre, but sounds great, and there’s enough variation that I haven’t become bored with it yet. Full-screen overlays appear when Reiji wears the New World Goggles, too, which, while simple, are a very nice touch, there’s full controller support, and most menu and option screens are animated, even if only to a small degree. The whole thing just oozes quality and attention to detail, and it looks and sounds great.

Even the font seems more refined than many VNs, somehow, though maybe it’s just been chosen well to suit the rest of the interface. The large Japanese and English text name of the character currently speaking, to the left of the main text box, looks really good, too, even though ultimately it doesn’t really add anything; it’s just very well presented. It’s just a shame the script itself — well, the English version of it, anyway — has so many typos and grammatical errors scattered throughout, many of which would even be picked up by a basic spelling-and-grammar checker. There are occasional words missing or joined together, and line breaks also look a little dodgy sometimes, with quite a few sentences ending with only ” on the last line. It really could have done with another editing pass. 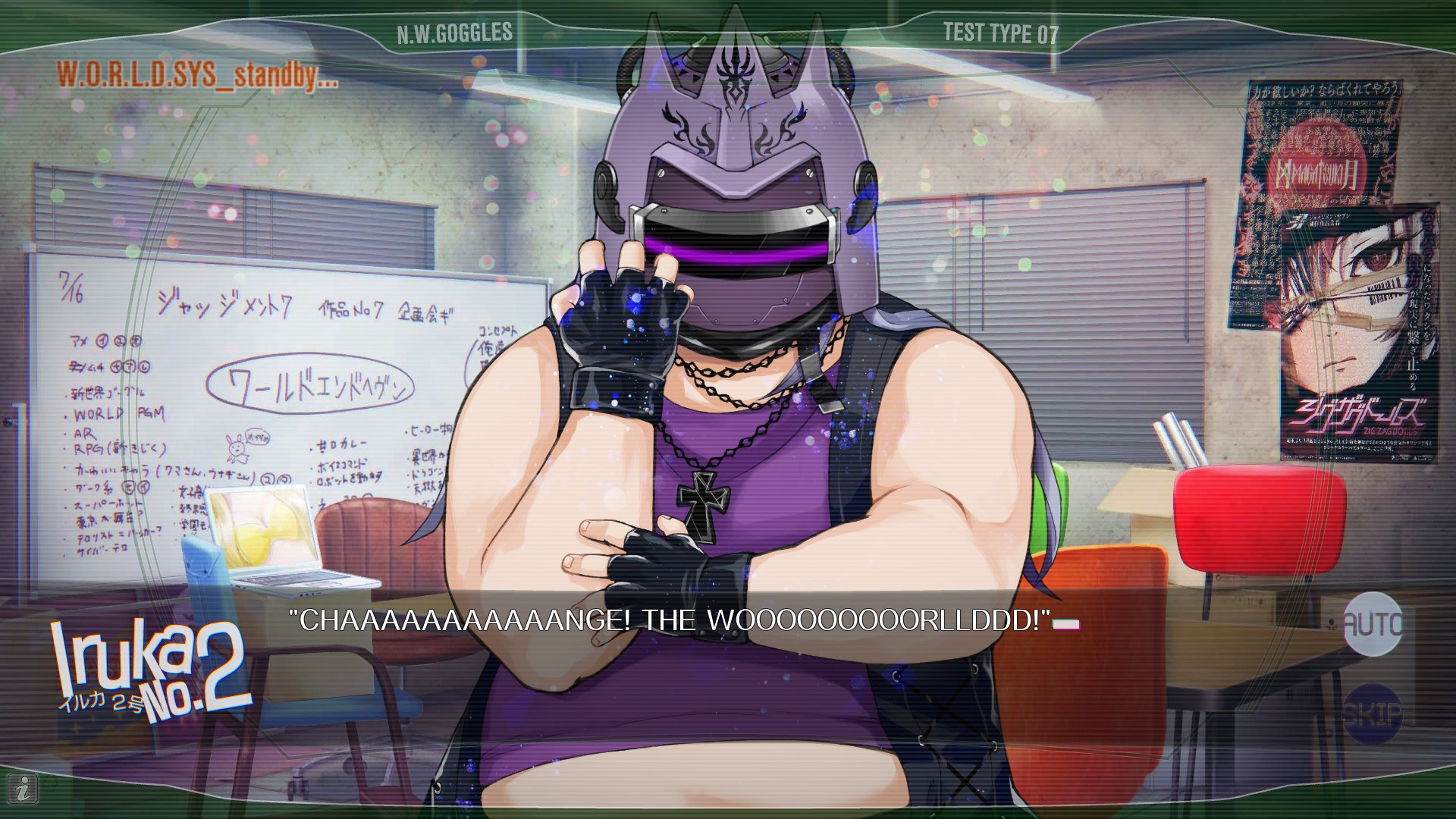 Scene backgrounds are reused a number of times, but in all but one or two cases they fit the text extremely well. Many have night and day versions, and gone are the beautiful, but desolate, images of school rooms and city streets with no people: OWiE even includes some background pictures with other people in them. I cheered out loud upon seeing the first Asakusa shopping street with crowds of people on it. Hooray!

The characters: beautiful stereotypes and perverts, all!

Character art is really good, with large, colourful, and attractive paper-doll style characters. In a few cases they don’t quite match the occasional full-screen images, but the characters are definitely recognisable, and all drawn in a consistent style. There’s a bit of unevenness in some of the pictures, too: Yuna’s breasts — the focus of at least a thousand words of the script, I’d guess — look a little uneven in a certain pose; and Myabi’s eyes also look a bit weird. But overall the character art is very good, even beautiful in most cases.

My only complaint here is that, especially with the length of the game, there just aren’t enough poses, emotions, and animations for the character sprites. The combat scenes, for example, show the characters in their normal relaxed poses standing next to their targets, and some of the big, moving, mega-emotional scenes could really have done with a few new facial expressions and animations. Don’t get me wrong, it’s as good as or better than most other visual novels out there, but it could have been even better!

The characters themselves are a bundle of fun. The leading girls are each beautiful in their own way, usually portraying a particular stereotype, be they air-headed schoolgirl, wanna-be lolicon, flat-chested tomboy, or unemotional goth. The leading guys are equally well stereotyped, though all are ultimately perverts! 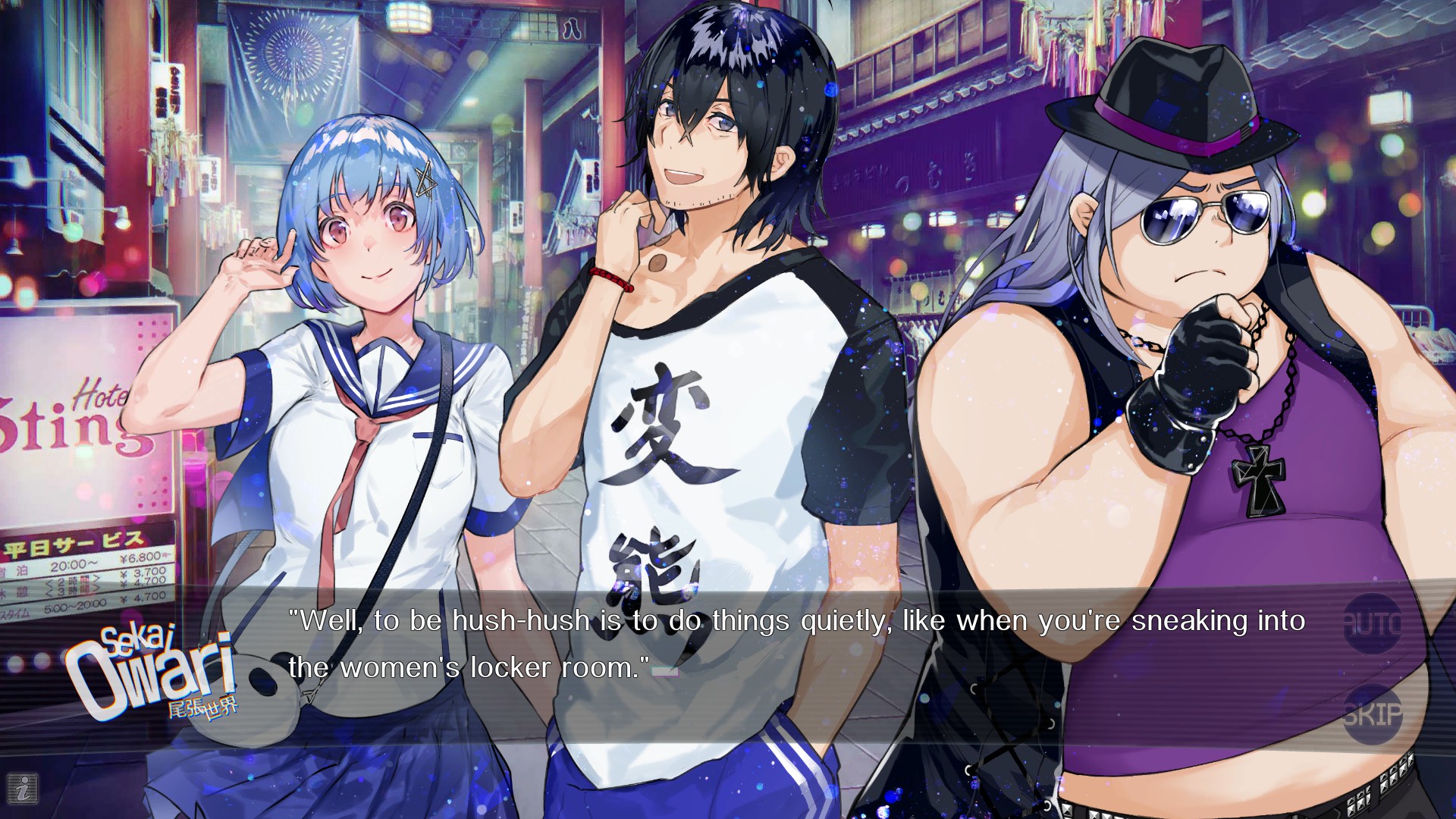 But each character has hidden depths and relationships with the other characters that are worth exploring. The interactions between Natsumi (*dreamy sigh* … Natsumi-san …) and Iruka2 are amusing, but once you learn the history behind them, many, many hours into the story, it all makes even more sense. The script writers and translators have done a wonderful job capturing the inherent silliness that pervades the Judgement 7 base; though the story itself is great, the characters really take it to the next level. 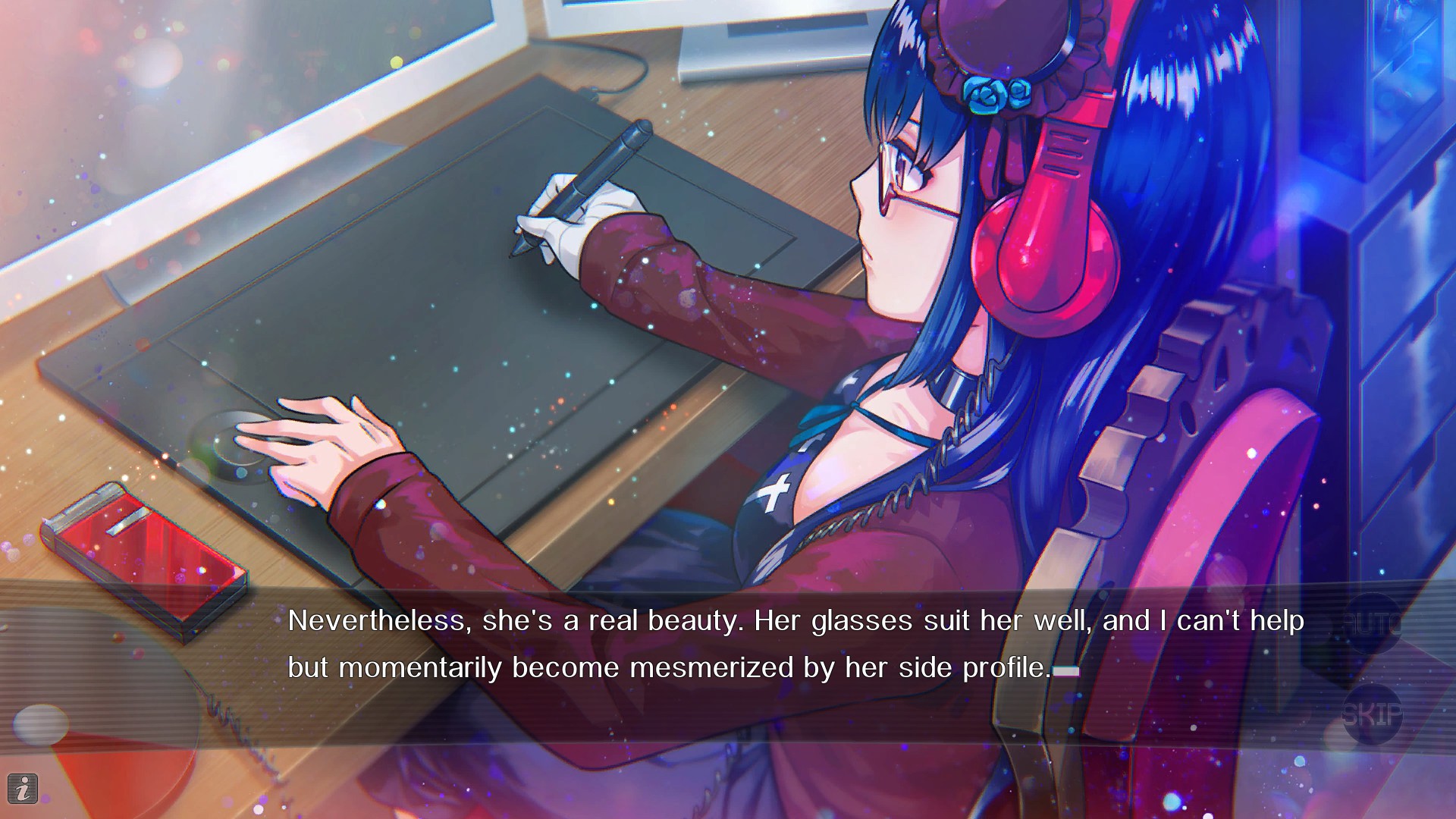 All characters, including the protagonist, Reiji, are fully voiced and fit the characters to a tee. Owari-san sounds perfect; Iruka2 is suitably annoying, but very enthusiastic; and Yuno’s actor speaks brilliant bimbo. They’re all excellent.

Our World is Ended tells a rather long (for a VN) and convoluted story about computer games, social interaction, and breasts. 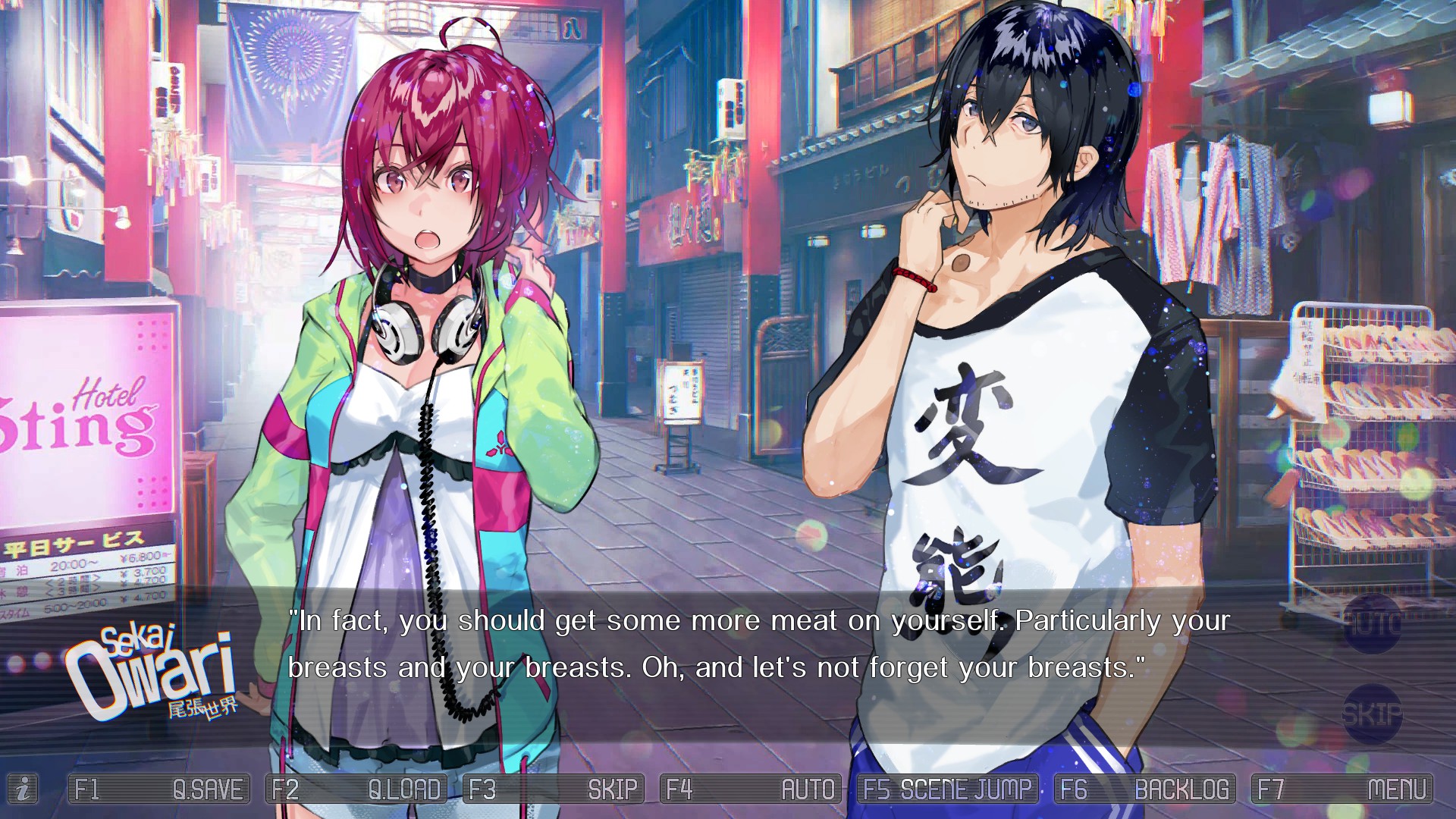 Yes, there is SO much talk about breasts that even though there’s absolutely no nudity or sex scenes, you’d most definitely be forgiven for think it’s a “boobie game”. Owari-san is continually referred to as “the pervert” and with good reason: almost every discussion with him includes at least one innuendo, and Yuno’s breasts not being mentioned in a discussion — or, in contrast, Asano’s — is a rarity.

I can imagine that some people might feel a little uncomfortable with all of this innuendo and breast-related humour, and indeed in a workplace in the real world it would be completely unacceptable. But that’s what makes it so much fun here! It’s harmless, hilarious, and sometimes — I confess — cringe-worthy. The writers and translators have done an excellent of taking something obviously inappropriate and making it a running theme of the game. I cracked up in the X-Calibur creation scene and even 20 hours in I was still getting an occasional laugh from the comments about Yuno’s “mammary weapons” and Asano’s lack thereof. It’s tasteless, but brilliant! 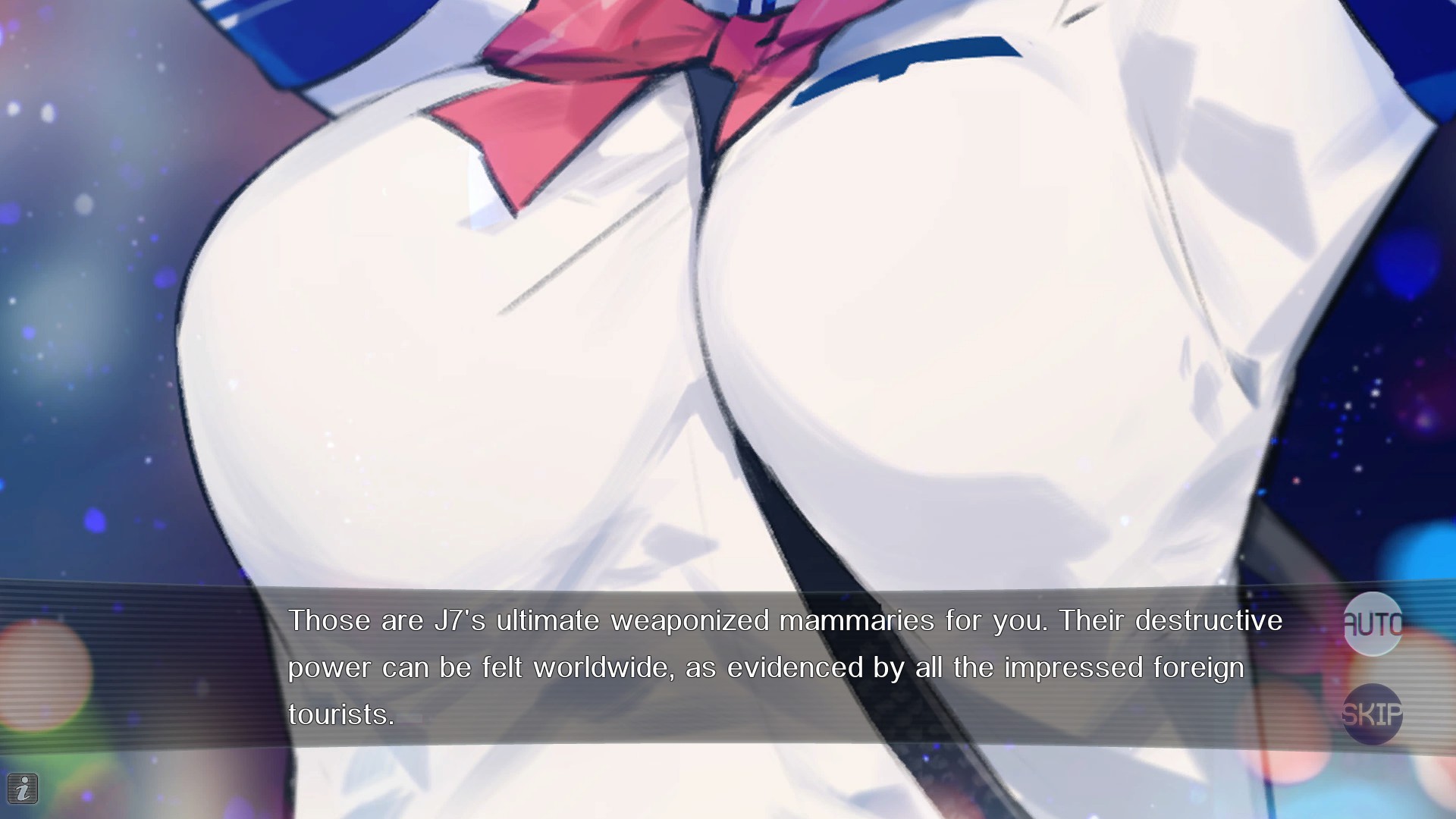 So what about the plot, when it’s not focused on breasts? It’s exceptional, too!

I don’t want to say too much as I’m sure I’ll give away some of the game’s secrets if I do, but suffice it to say I’ve not become bored with it at all in spite of its length (ooer!). With a bit of suspension of disbelief, it’s detailed enough to be almost believable and I thought it was rather clever. I noticed only a couple of small plot holes and they didn’t matter at all in the grand scheme of the story.

The actual gameplay in OWiE is almost entirely like basically every other visual novel, mostly just watching and listening and following along, making an occasional choice from an on-screen list of a small number of choices. But there’s one exception: “Selection of Soul”.

I don’t know where the name comes from, but the Selection of Soul sequences provide a second way to influence the story. Ultimately they’re just another way of selecting a choice from a small group, but they’re presented as a series of variable-speed scrolling choices that move across the screen, meaning that you may have to take a chance on a fast-moving choice before you’ve seen all the alternatives. If you fail to choose anything then that in itself is a choice, and the story will progress based on that. 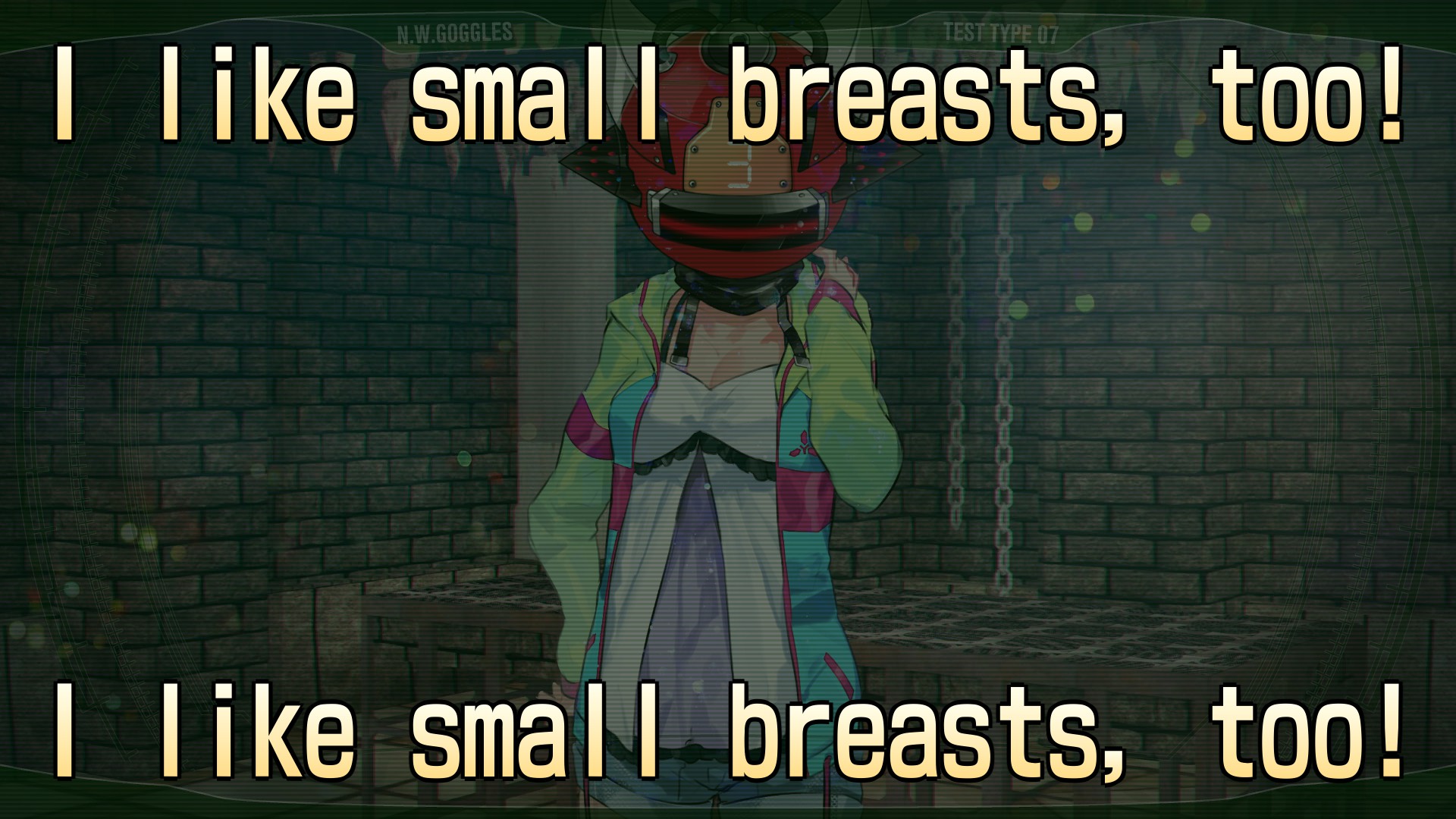 It’s simple and doesn’t really make any special kind of sense in relation to the rest of the game, but it works well and it’s nice to have a bit of variation.

Ultimately many of the choices — both normally selected and “soul-selected” — seem to have little or no effect beyond changing a few lines of subsequent dialog, but the game does feature many choices, multiple endings, and a large number of Steam Achievements, further expanding the expected play time for anyone interested in seeing how the story would have turned out had they made different choices along the way. To give a basic idea of the story’s length, my first playthrough took approximately 25 hours. I’m now up to just over 31 hours and I’ve seen two endings so far.

Supporting the replayability is a very fast and easy-to-use skip feature, a large number of save slots (90, I think) including screenshots and game times to make them easy to navigate, a backlog / history allowing jump to any line of text from the current session, and fast loading and saving, all making it easy to jump around in the story. 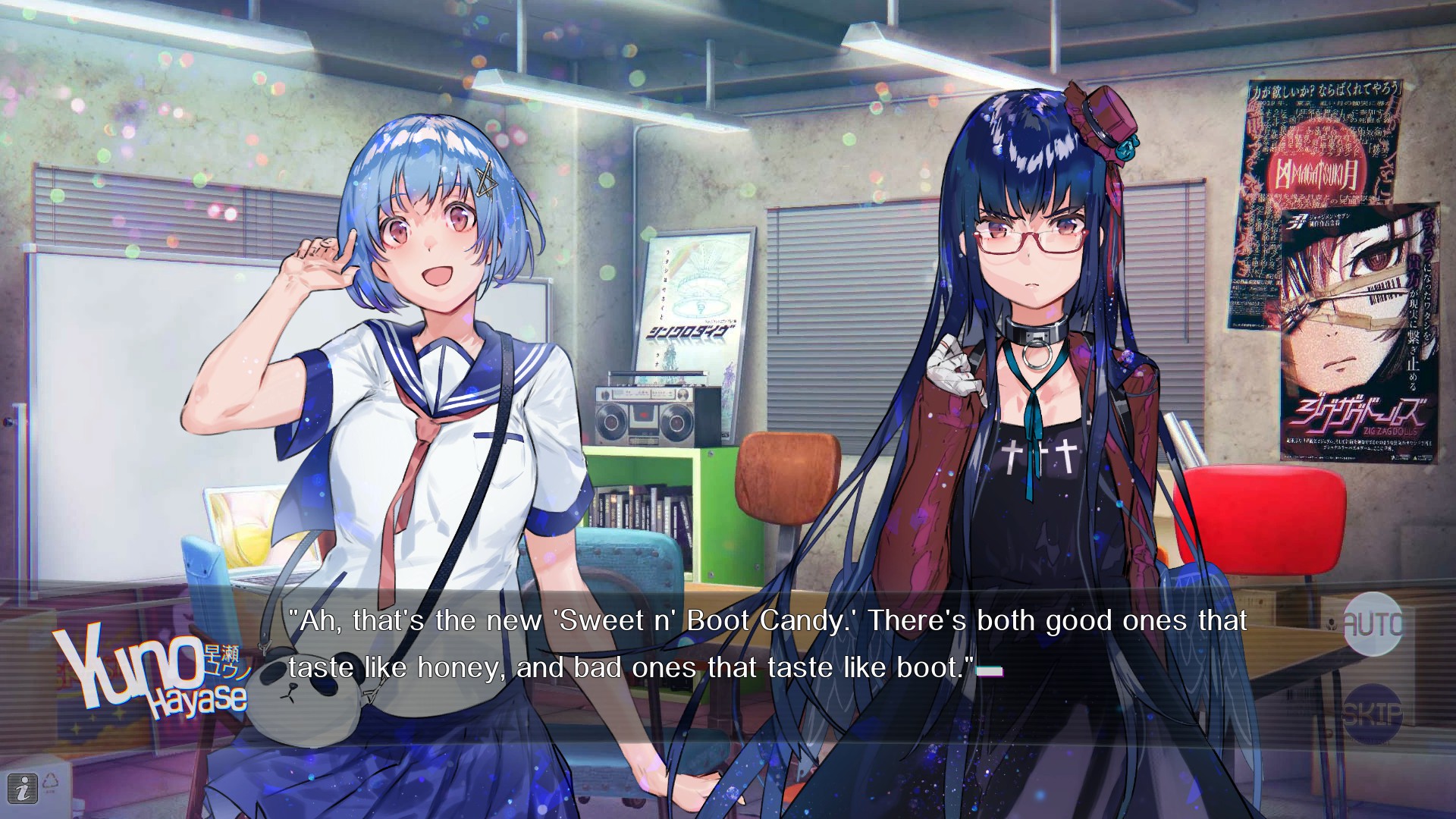 Our World is Ended is wonderful. The script is brilliant, funny, and emotional. The characters fit so many stereotypical roles, but they do it so, so well; it’s hard to not care about what happens to them. The story is convoluted and crazy, and manages to stay interesting through the many hours it’ll take you to read it. And the presentation is top notch: beautiful art; great sound, music, and voices; and simply the most impressive VN interface I’ve seen. The many unlockables, multiple endings, and Steam Achievements provide some replayability, too.

It’s let down only by the relatively small number of poses, animations, and expressions on the otherwise-fantastic characters, and, sadly, the lack of attention to detail in the English text; there are so many errors! Another editing pass before release would have seen it receive the Autosave rating that it otherwise deserved.