Let us consult the stars.

Astrologaster was one of those games that I almost passed up on. I don’t remember exactly when I first came across Astrologaster, but it didn’t click with me at first. I was just sleepily browsing the upcoming games section around midnigh,t as often I do, and it popped up. I thought the name sounded interesting, so I clicked, looked at the screenshots, and thought “hmm, I don’t know”. I saw it a couple more times, but when it got closer to the release date I finally watched the trailer. Why I didn’t watch it before, I can only blame on being way too tired that night. With the combination of an intriguing trailer, the real life elements behind Astrologaster, and a wee peek at a gameplay video, I thought, “Hey, why not take the chance?”. Spoiler alert, I’m glad that I did. 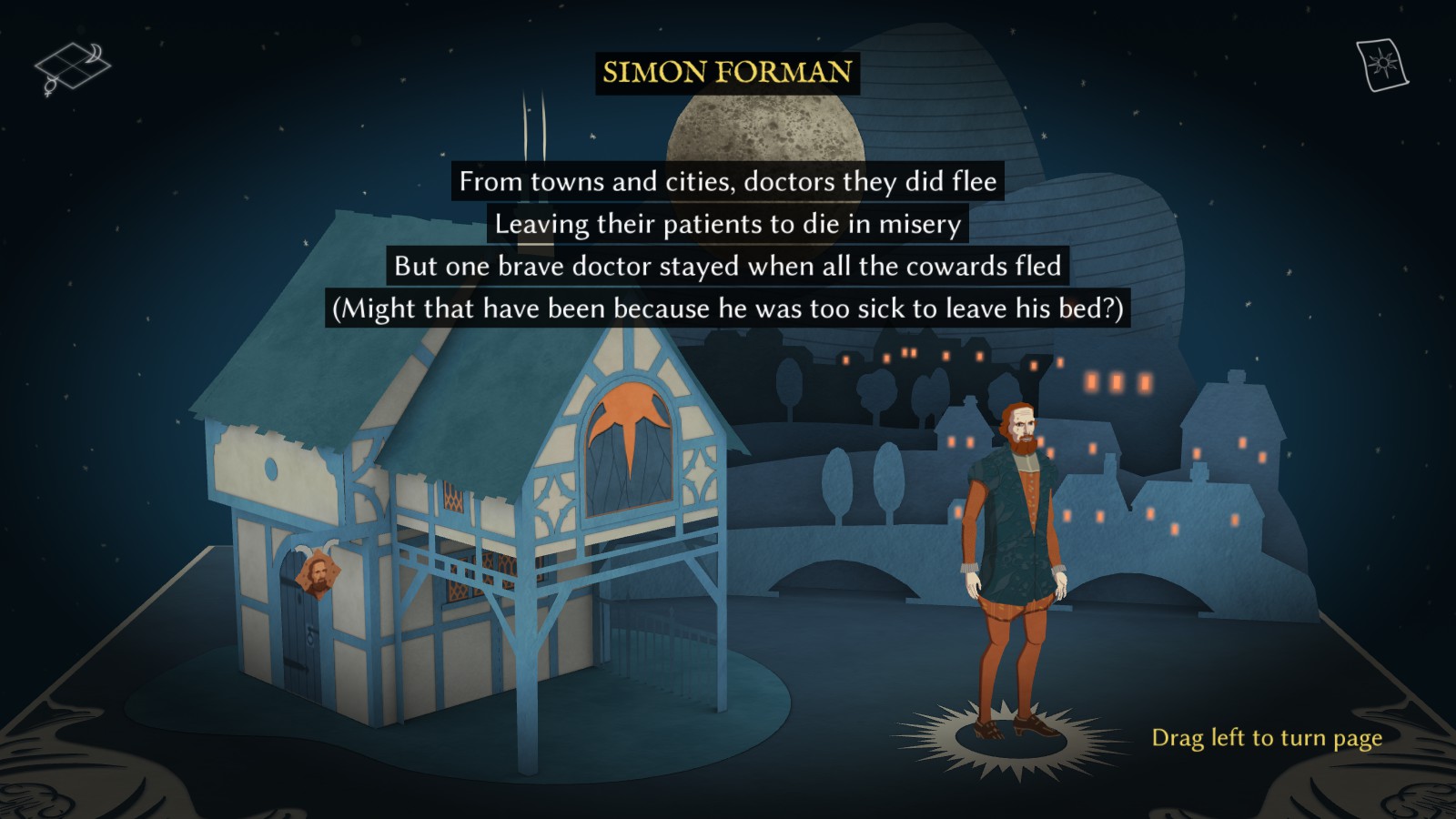 In Astrologaster, we go back in time to an Elizabethan London to take a look at a particular man’s life. This man is Simon Forman and he is a doctor. Well, that is if you call someone who relies on interpreting the stars to diagnose and treat their patients a doctor. We first meet Simon Forman in 1592 when the Plague was making another round in England. Simon Forman, being one of the unlucky, consulted the stars for how he could cure himself. This led Forman to brew up his own cure, dubbing it “strong water”, and test it himself. After it surprisingly worked, Forman set out with his strong water to cure others in London and thus his reputation spread. 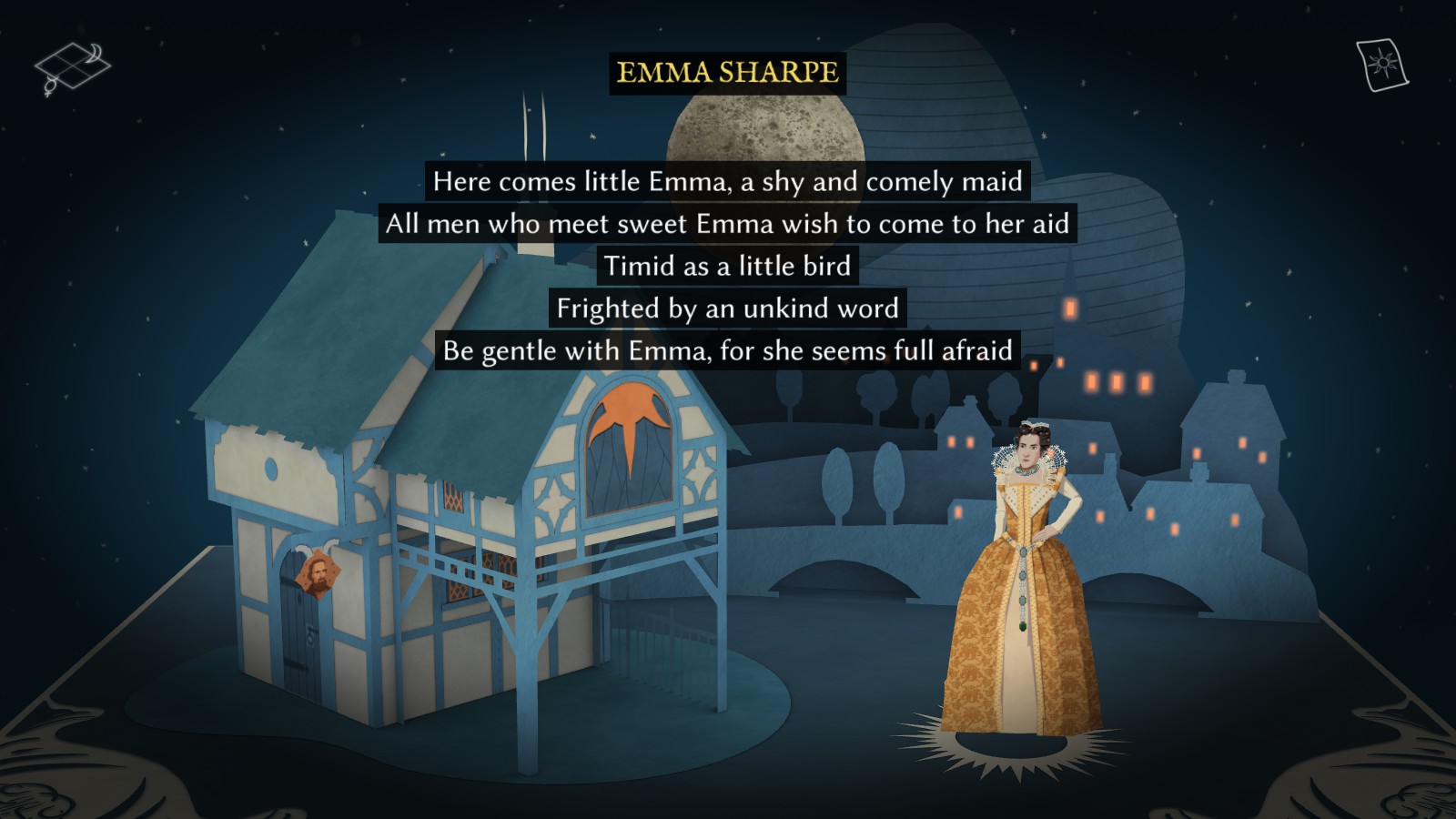 With his newfound reputation bringing in new querents (or patients), it also got the attention of others who did not approve of him. It didn’t take long for The College of Physicians to crack down on quack doctors, warning citizens to make sure their doctor was actually licensed and those still practicing without one to be prosecuted. Having no fancy medical license himself, Simon Forman recognized this threat. To get a medical license, he requires eight letters of recommendation to prove his experience as a doctor of astrology and physick. 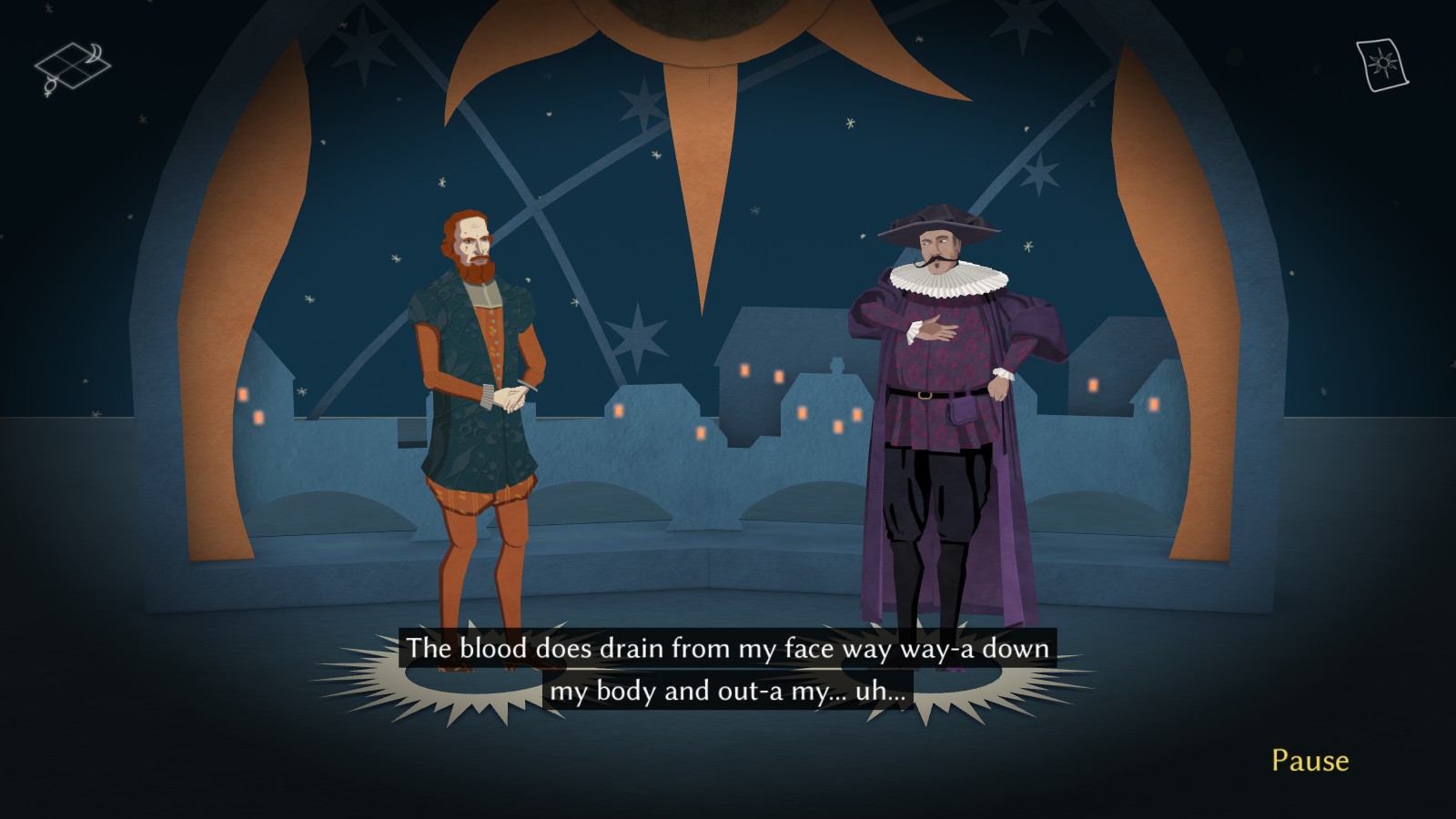 Even with the posted warning, Simon Forman still has querents seeking him out for what only he can provide. Using a pop-up storybook stage, each querent is introduced with their own introduction song (which are actually called madrigals) to give us an impression. This doesn’t happen on just their first visit, we get a new section each time we see them again. Turning the page, the consultation finally starts as Forman officially meets them. Here, the querent will inform Forman what’s ailing them along with other details that may help. Of course, Forman doesn’t just deal with diagnosing and treating his querents. He also dabbles in predicting the future, what that querent should do, or determining what is actually happening. This can range from diagnosing someone with Evil Digestion to predicting how successful someone (or something) will be. 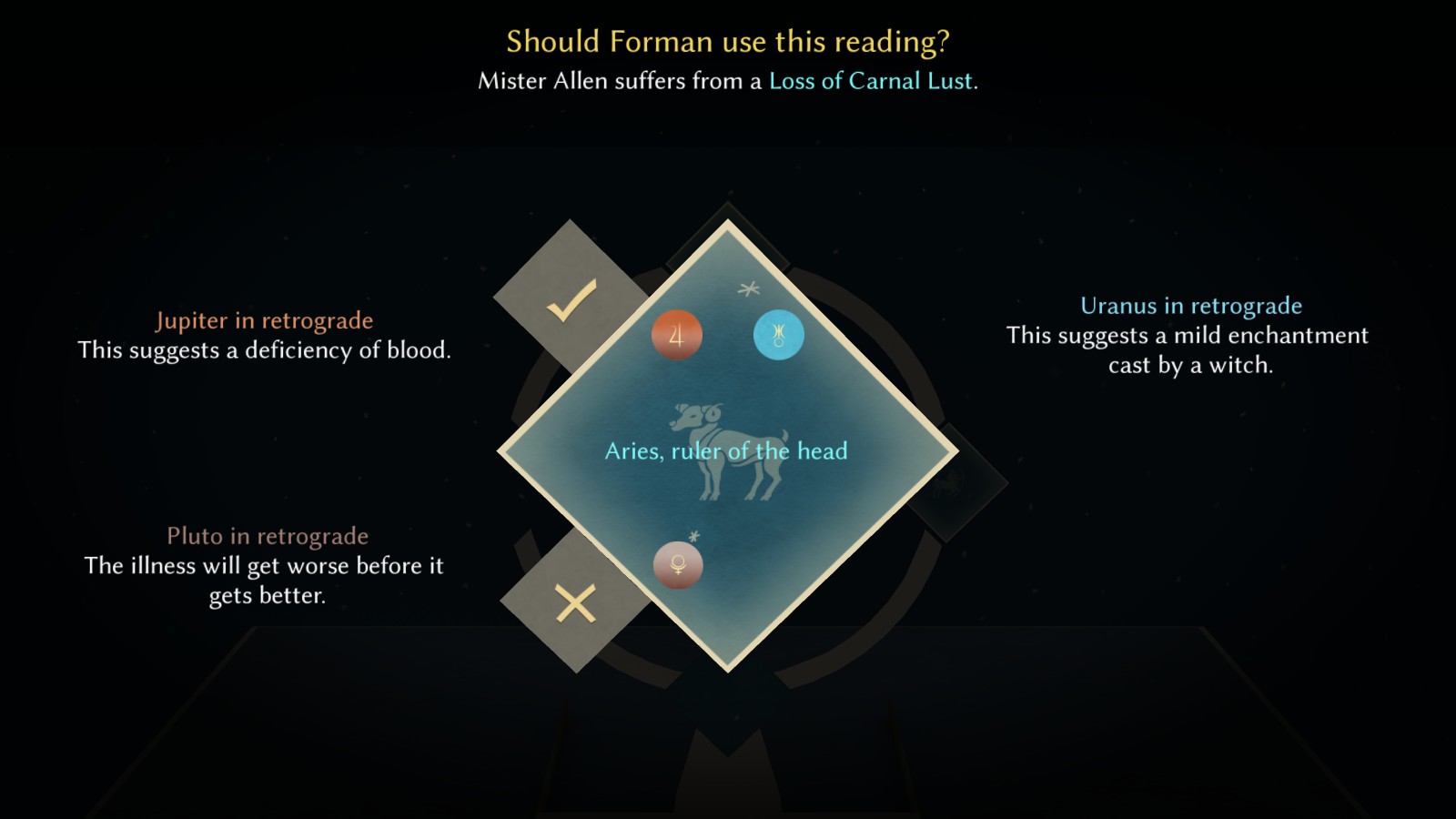 Forman will then begin to consult the stars and you will be faced with two to three different choices on an astrological chart. For diagnosing illness, you’ll just have to pick a zodiac sign that you believe is the answer. For anything else, the process is a bit more elaborate. Let’s say a querent wants to know if her husband is hiding something from them. When you consult the stars, you’ll be faced with sets of zodiac constellations so you can get the whole picture. With a couple of choices to choose from and your querent possibly looking for a specific answer, a dilemma begins to rise with some of your consultations. What will you actually tell your querent? Will you tell them exactly what they want to hear, and possibly confirm their suspicions, in an effort to get closer to that sweet recommendation letter? Or will you go with what you believe is true and tell them the hard truth? You also can’t forget that they’ll have more consultations with you, so the querent can and will tell you the result, bringing you closer to getting a recommendation letter or further. Once the consultation is done, the querent’s visit is logged into their case summary which you can check if you need a refresher or need to see how close you are to a recommendation letter. 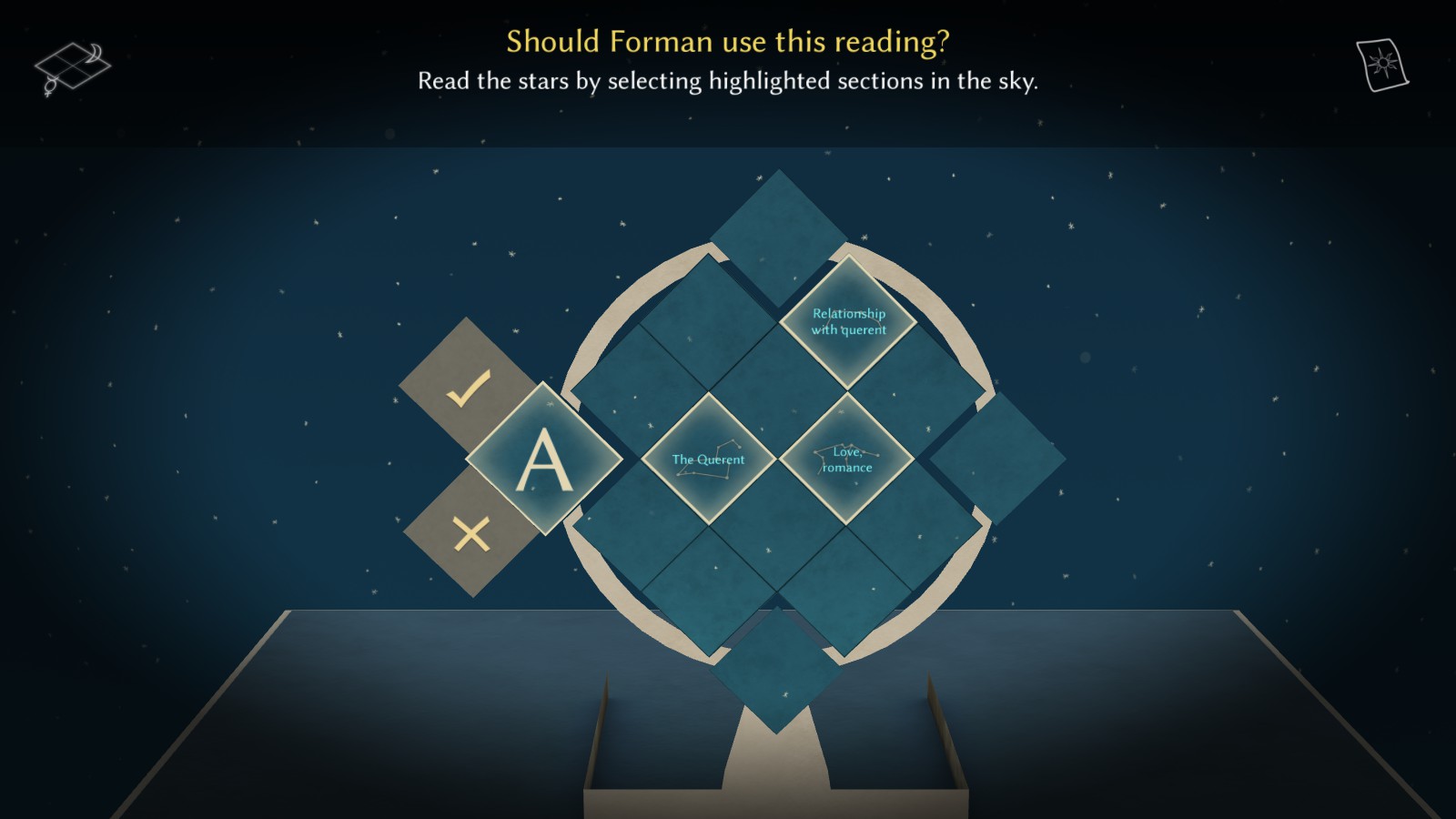 Astrologaster uses an autosave system, so choose your answer carefully. If your answer isn’t to your querent’s satisfaction you can’t go back and change it (though you might not want to change it later on). To be specific, the game doesn’t autosave until you turn the page (so before the introduction song, before the consultation, and after choosing what reading you’re going with). This is particularly great if you’re like me and accidentally said yes to one of the choices without reading the others. In this case, you can quit and go back in to look at the other choices as long as you don’t turn the page. 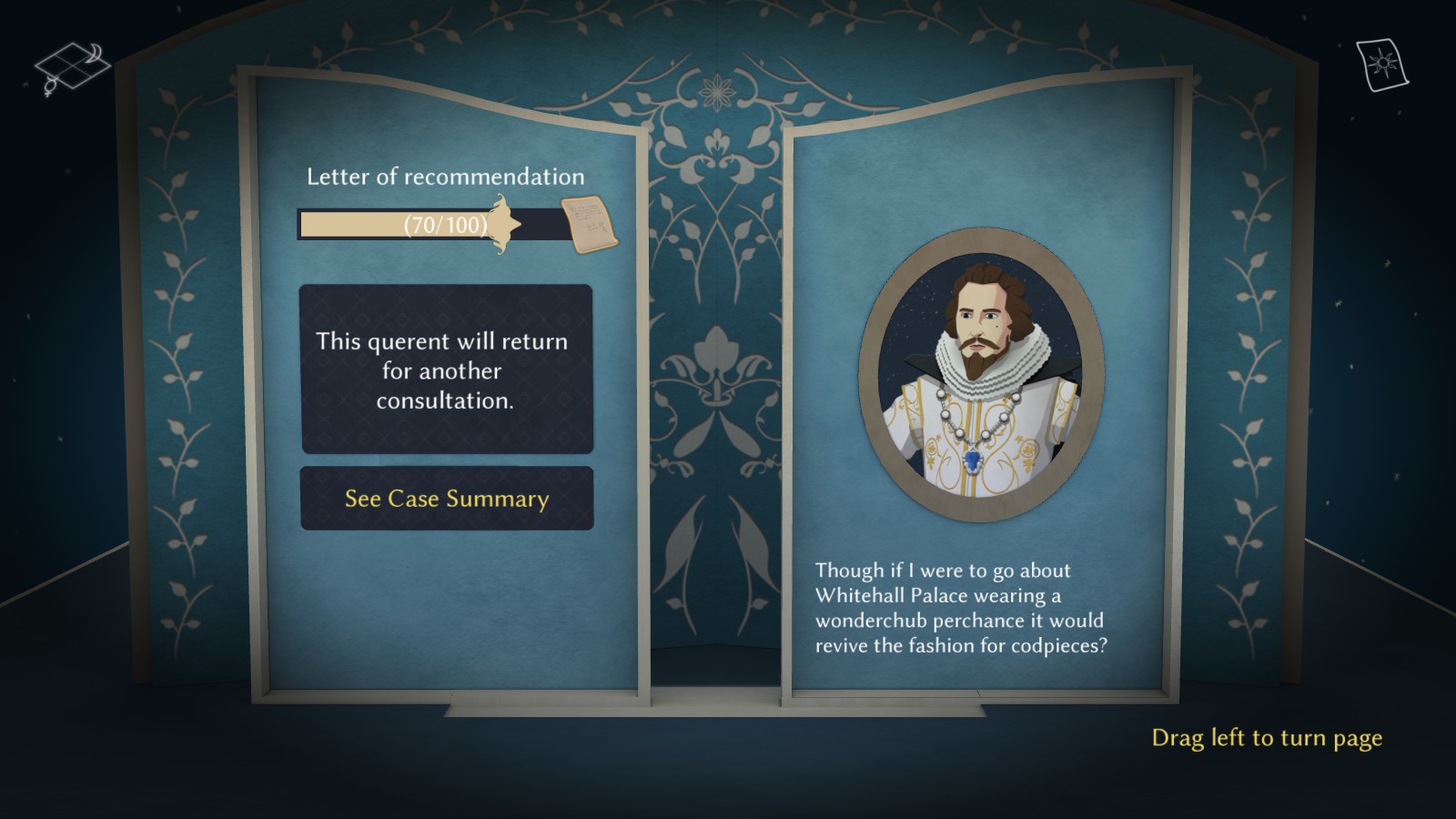 Simon Forman and his practice of treating his querents by reading the stars may seem unreal. We see a lot of creative stories being told and it won’t be far-fetched that this is another team getting together to bring it alive. Well, truth be told Simon Forman was an actual person that practiced Horary Astrology. The team behind Astrologaster strived to make the game as accurate as possible (with a few exceptions here and there) such as the illness, treatments, and some of the querents were actually real people that sought him out (like Emilia Lanier). If you’re a history buff, this will definitely be up your alley as historical events and figures around this time will pop up or be mentioned. Even the way the characters speak will reflect the time period with a little modernization thrown in. I can only imagine how difficult it was to write this game as well as the madrigals, especially since the team put in subtle jokes (which I honestly giggled at). 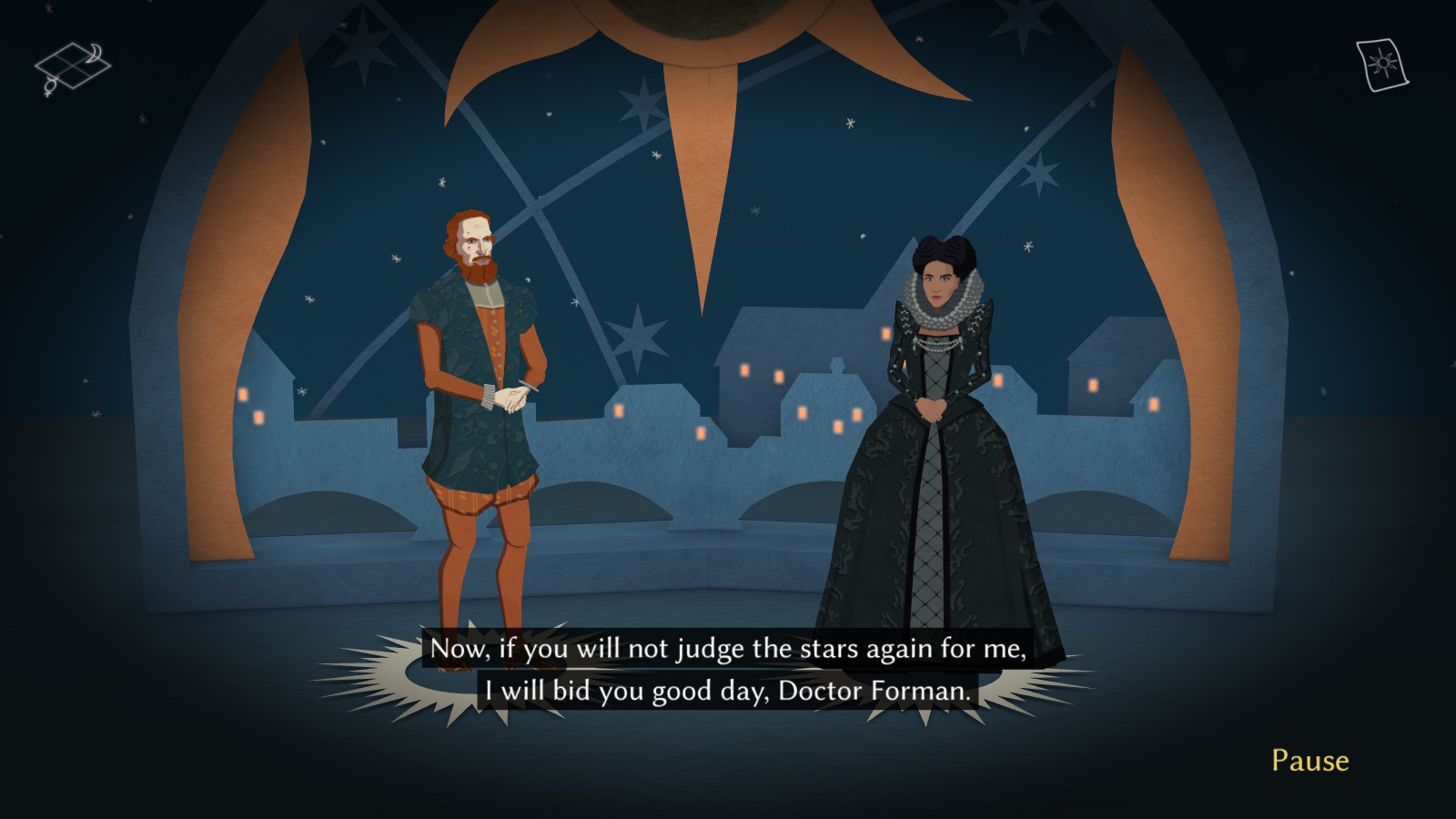 If you’re looking for a truly outrageous historical game, Astrologaster will be up your alley. Even if you’re not really into history and you’re on the fence about getting Astrologaster, I highly recommend picking this game up. I soon found myself looking forward to every part of Astrologaster while not wanting to rush through due to how well written and voice acted it was. I looked forward to each new madrigal, what a new consultation will bring to the table, and what a new querent will be like. I still can’t help but chuckle when I remember that I convinced one of Forman’s querents that her friend was indeed bewitching her.