It’s not easy being the shortest guard in the realm, but what Guard Duty lacks in stature it makes up for in point and click charm.

The adventure genre is well defined by now, but the new point and click game Guard Duty attempts to shake things up with a few new surprises to the classic formula. Many such games in this tradition contain at least three main elements that make up their foundation: story, puzzles and artwork. Although the proportions of these elements vary wildly in Guard Duty, the end result is still a fun and refreshing take on some well-worn themes. The game puts you in the pixelized role of not one, but two main characters, from opposite ends of the same timeline as you quest for different, but ultimately united, goals. 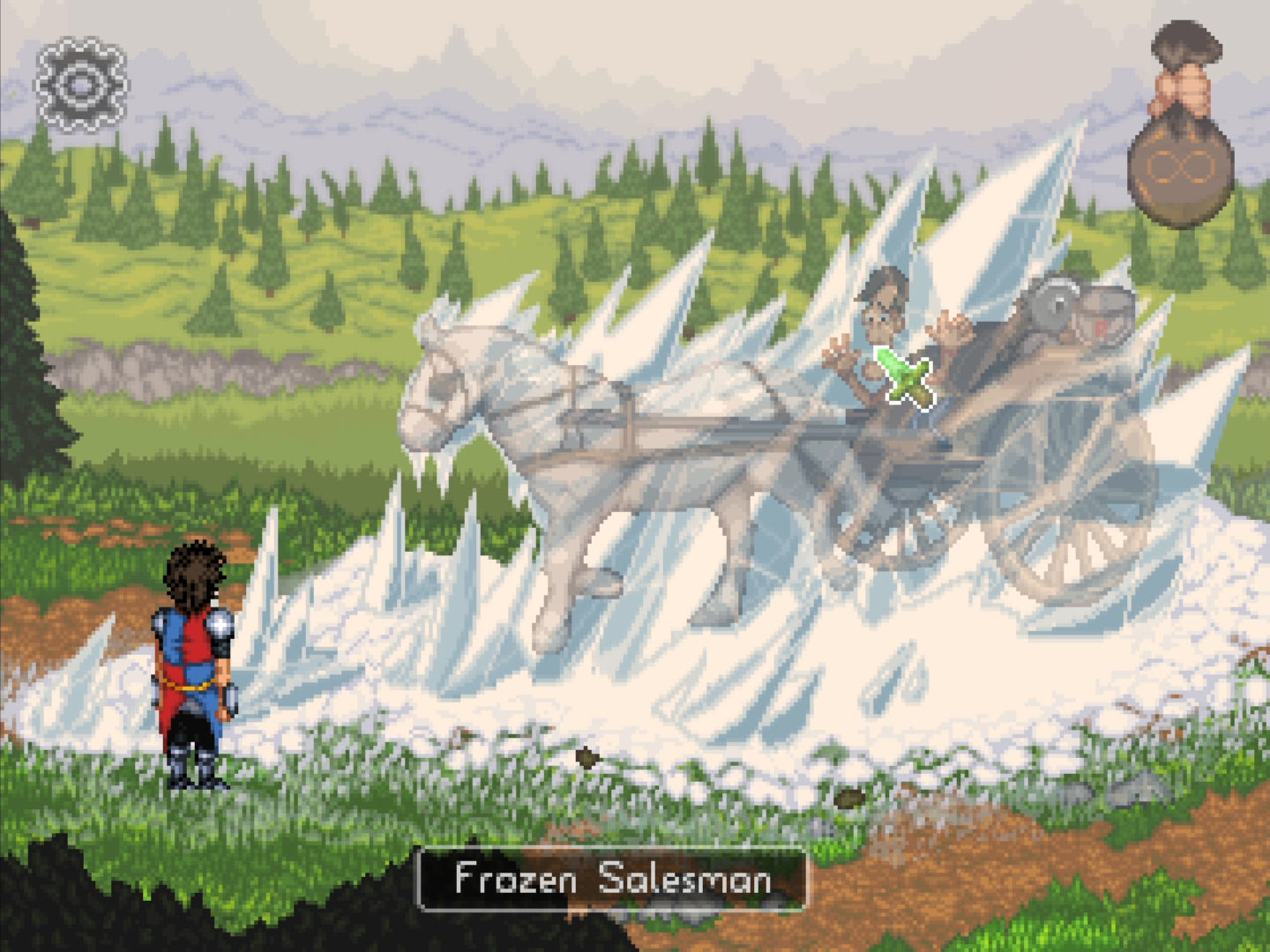 You’ll be spending the majority of your gameplay in the medieval lands of Wrinklewood guiding the well intentioned, but none-too-bright, young Tondbert, as he embarks upon the staple of clichéd gaming quests : saving a kidnapped princess from an evil wizard. Later, you’ll be thrust into the far future where you take on the role of resistance fighter Starborn as he employs an array of high-tech gadgetry to infiltrate a world-dominating regime and overthrow…well, an evil wizard.

The two timelines do in fact connect, even if the twist (without spoiling anything) is a bit simplistic. Narratively speaking, Guard Duty doesn’t exactly contain the most ground-breaking story in the genre, instead it relies on witty dialogue, clever descriptions, and unique characters to propel the player through its otherwise pedestrian plot. 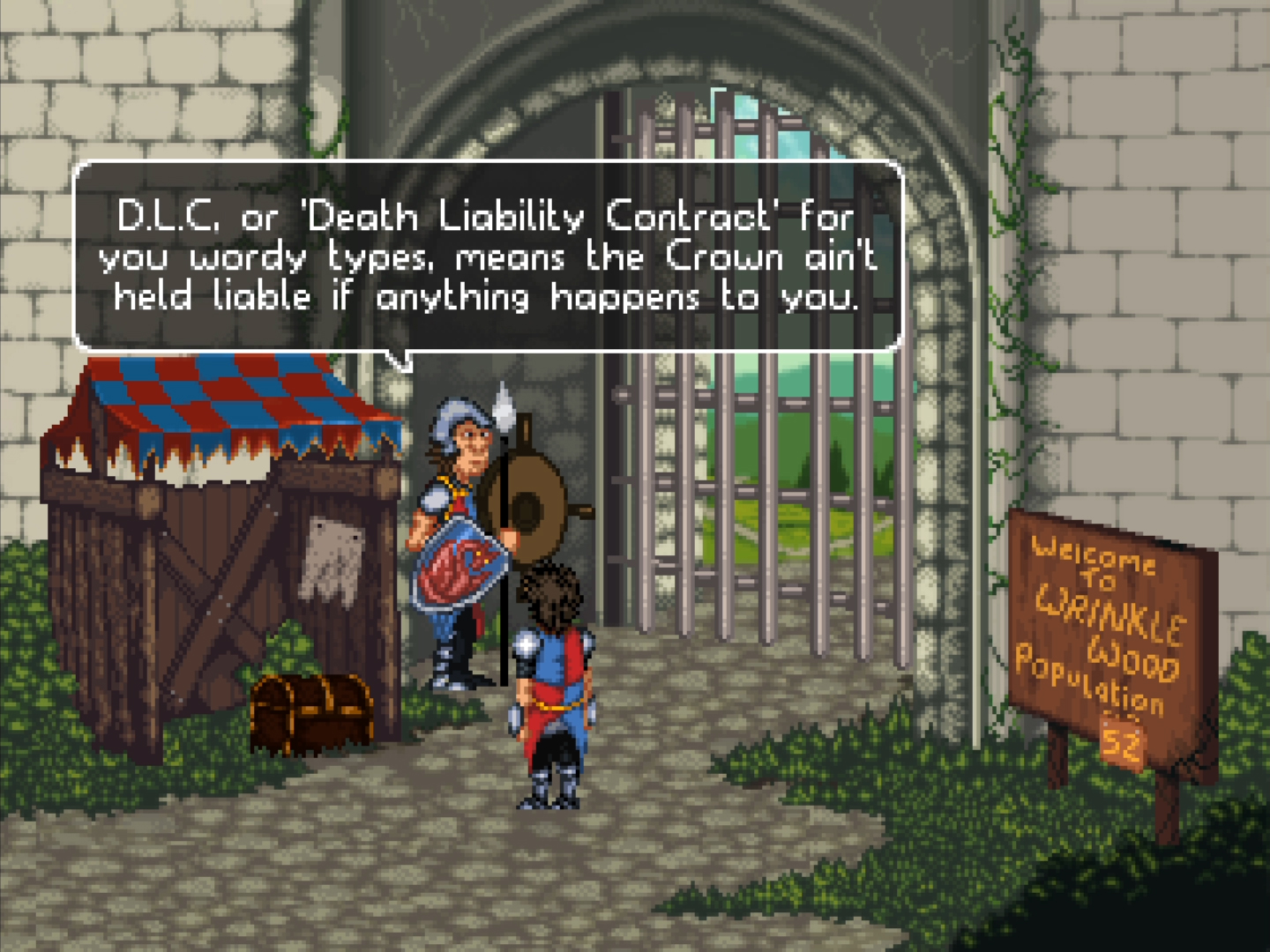 In terms of storytelling, it’s the humor embedded into each one of these descriptions that really bring Guard Duty to life, and makes it fun to play. Adventure titles that aim for laughs usually come across as wilting Dad Humor (no offense to the millions of dads who suffer from this real-life affliction).

Admittedly there are a few groan-inducing moments in Guard Duty, but I have to say that overall I did genuinely chuckle, guffaw and giggle almost the entire way through. The humor is open to pretty much everyone, but if you’ve played enough other adventure games, there are some much appreciated in-jokes hiding between the lines. 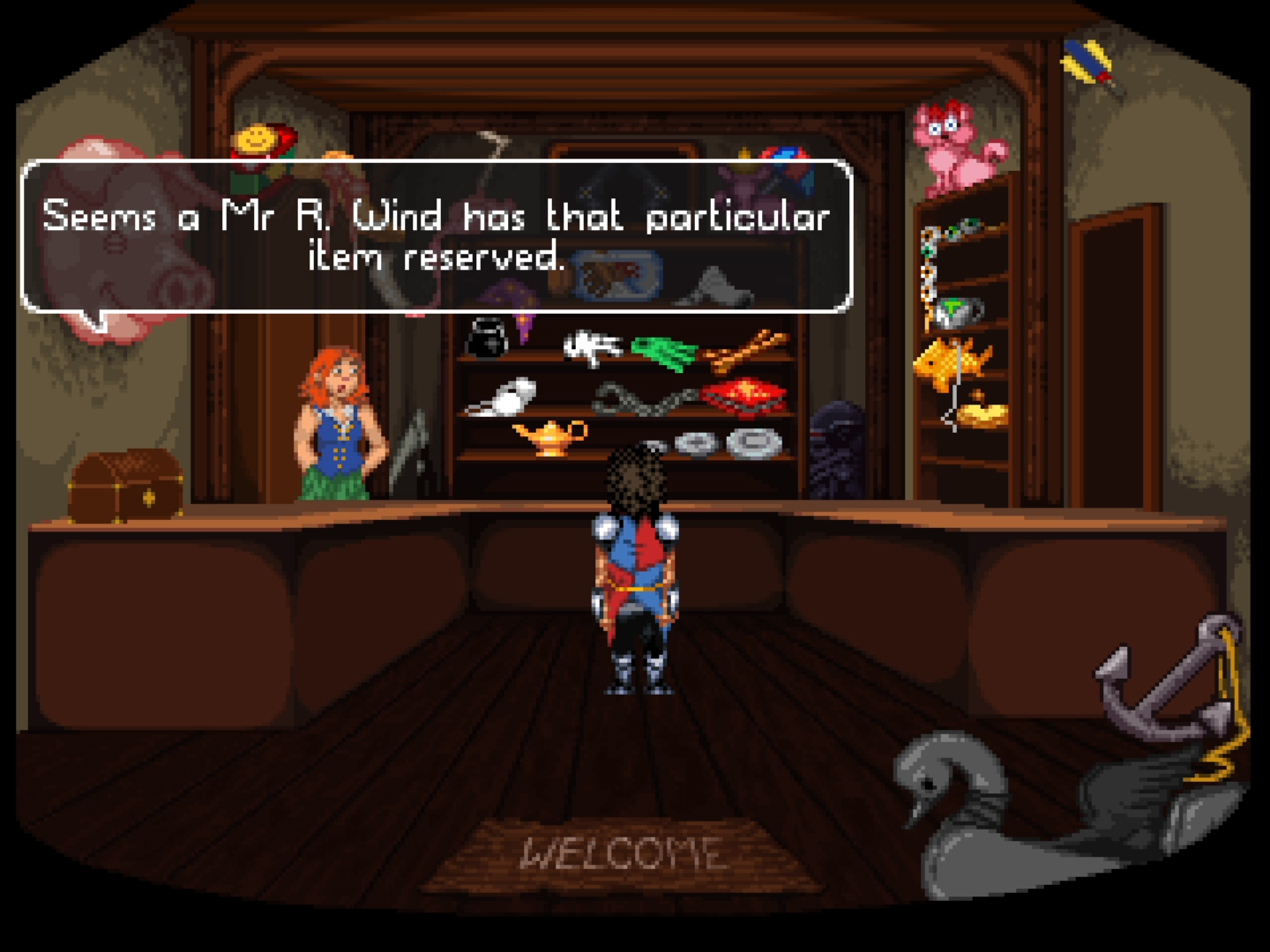 Guard Duty boasts of having puzzles that hearken back to the “golden age” of adventure gaming while employing a modern sensibility to make them more approachable to players not as well steeped in the traditions of pixel-hunting, unwieldy inventories, and logic-defying conventions that so defined its predecessors.

One feature is the addition of a running task list that shows what your current objectives are, and crosses each one off as you progress. This ensures the player will never waste time second-guessing what they’re supposed to be doing, and keeps the focus on moving the story forward. The puzzles themselves are very sensible and don’t demand that you contort your imagination to find a solution. 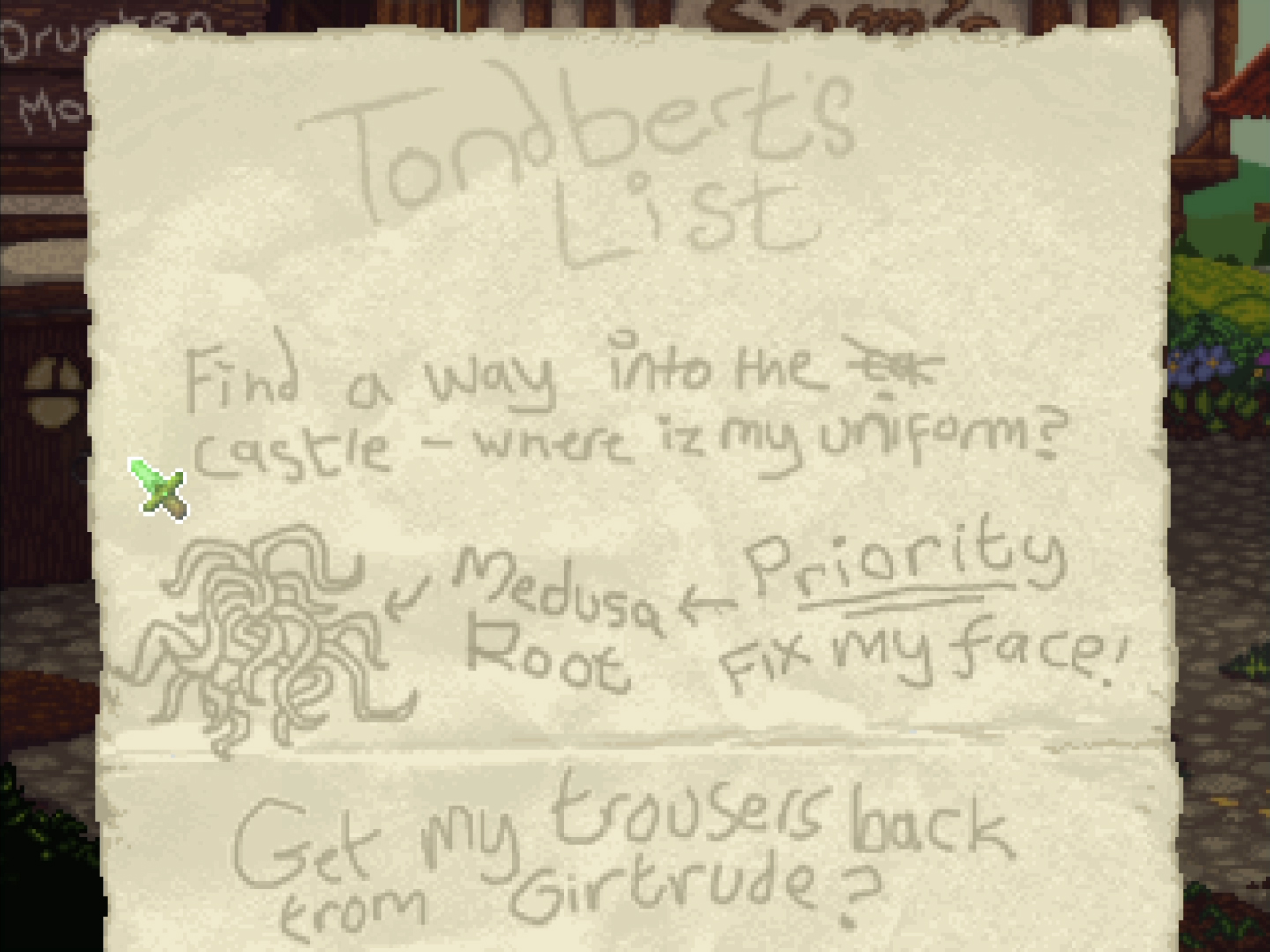 I almost hate to say it, but the flip side of this accessibility is that the game is a tad on the linear side. The puzzles are so straightforward that they resemble “fetch quests” in an RPG. Go to location X, grab item Y, and use it on object Z. They are fairly obvious, and lest you be tempted to start pulling out your hair, are telegraphed far in advance. Naturally, this does alleviate any frustration. This is absolutely a frustration-free game, in fact, and I am grateful for that, but the trade-off is that actually solving the puzzles doesn’t feel very rewarding. There are no “ah-ha” moments, and you rarely get a point-and-click dopamine hit from solving a particularly tricky one. Again, this is great for beginners to the genre, but experienced players may not be satisfied with every challenge.

That’s not to imply the game is overly easy or uninteresting. The puzzles do get better as the game progresses. The challenges in Act I were too simple for my tastes, but by Act II became a bit more involving. For example, there are sequences in the Deadwoods that are clever in a way that is engaging, while still avoiding any frustrating design decisions. I do wish there were more bits like this, but it at least provided enough variety that I didn’t lose interest in helping Tondbert continue on his love-struck quest. 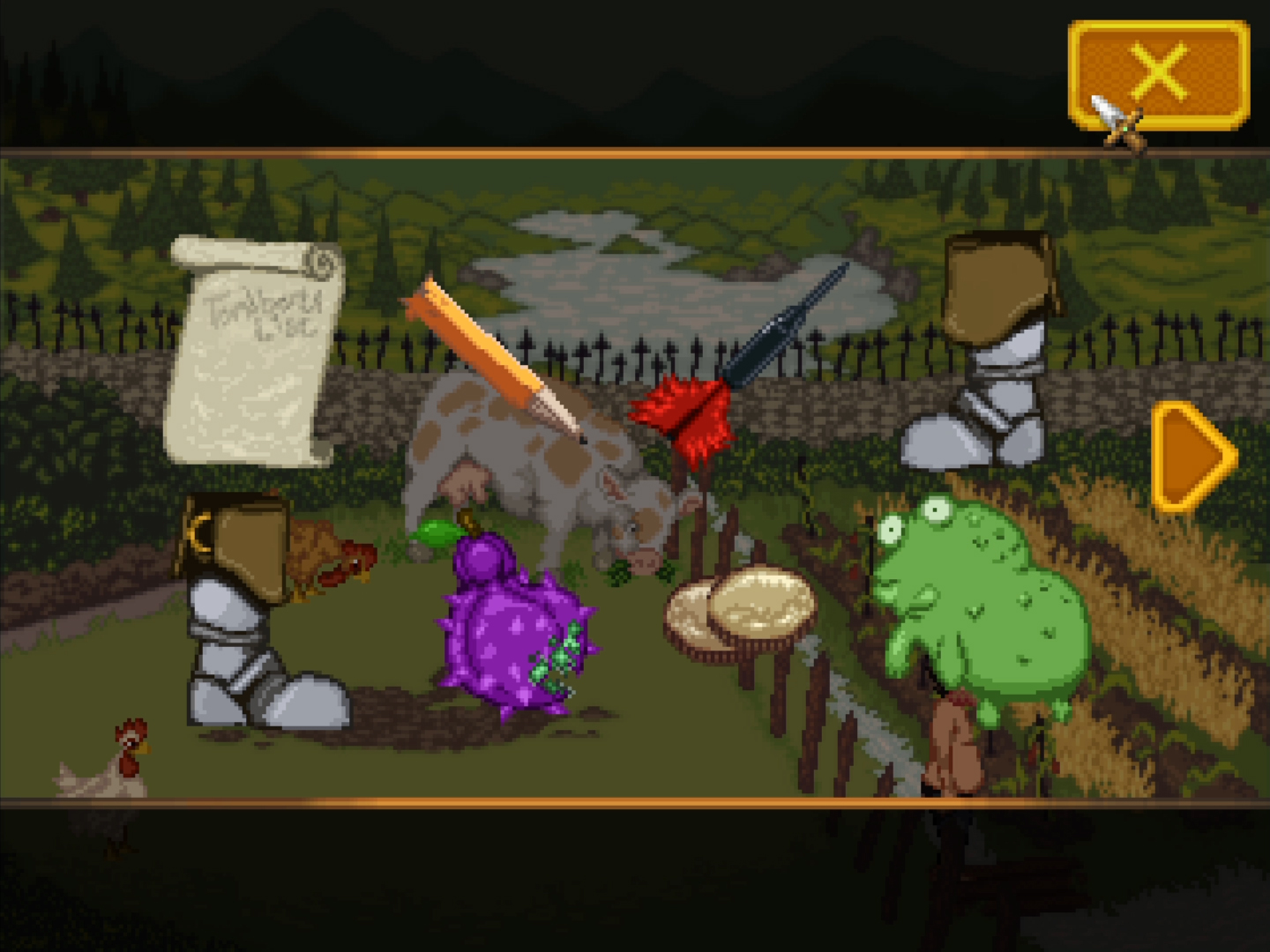 As I’ve mentioned before in other reviews, I’m a sucker for pixel art, and it’s here that Guard Duty truly shines. The overall art direction, design and execution are consistently impressive, not only for their retro-tastic-ness, but also for their originality . Staying true to its origins by sporting a whopping resolution of 320×240, the game doesn’t waste even a single pixel. The backgrounds are lovingly rendered, and every nook and cranny is packed with tiny details. The style is a direct throw-back to classic adventure games, while still being fresh and alluring. 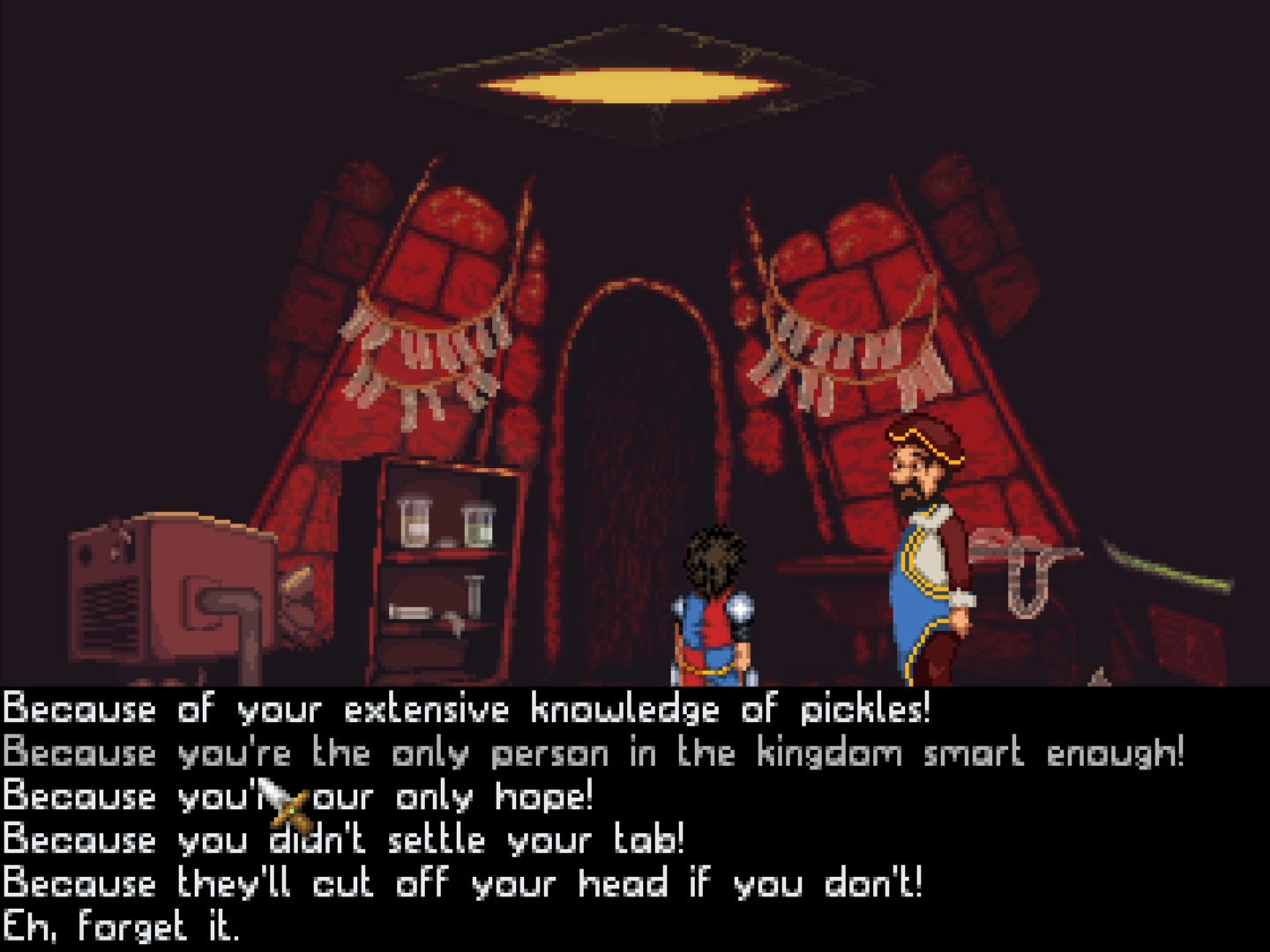 The use of color, light, and parallax bring a considerable amount of depth to each screen, and make Wrinklewood a joy to inhabit. The characters and background animations are all lively and humorous, and bring a palpable sense of energy to each sequence.

This is made all the more impressive by the fact that it is the work of a single person, developer Nathan Hamely. It’s evident in each scene that he is not only a devotee of classic pixel art, but an incredibly talented artist in his own right. The graphics in Guard Duty were truly one of the stand-out highlights during my time with the game, and warrant a recommendation on their merits alone. 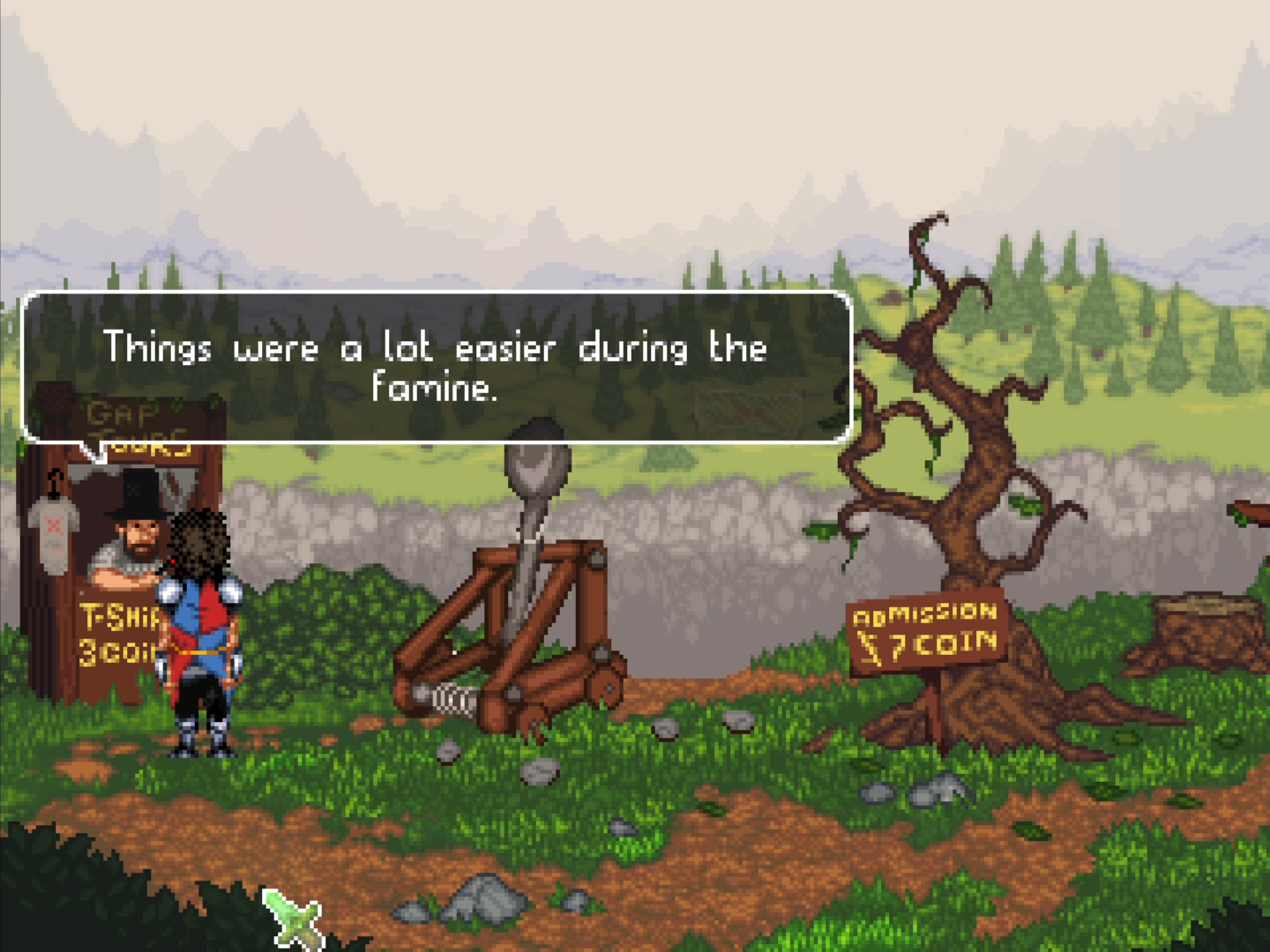 The Sound of the Madding Crowds

The core elements of this adventure game are indeed well handled, but that doesn’t mean there aren’t a few missteps along the way.

The voice acting was…well, it was. No offense to the actors (which, in reality, were mostly just the devs pulling double duty, which itself is commendable), but by the end I muted them and relied solely on the text. It’s not just that it was a bit amateurish, but also because there was so much of it. The description on the Steam page boasts of having “over 6000 lines of fully voiced dialogue.” In my opinion, that’s several thousand lines too many.

Seriously, the characters do not shut up. It’s a constant blab-fest from the title screen to the end credits. Thankfully most of it is funny, but there will no doubt be moments when you mumble under your breath, “Get on with it!” 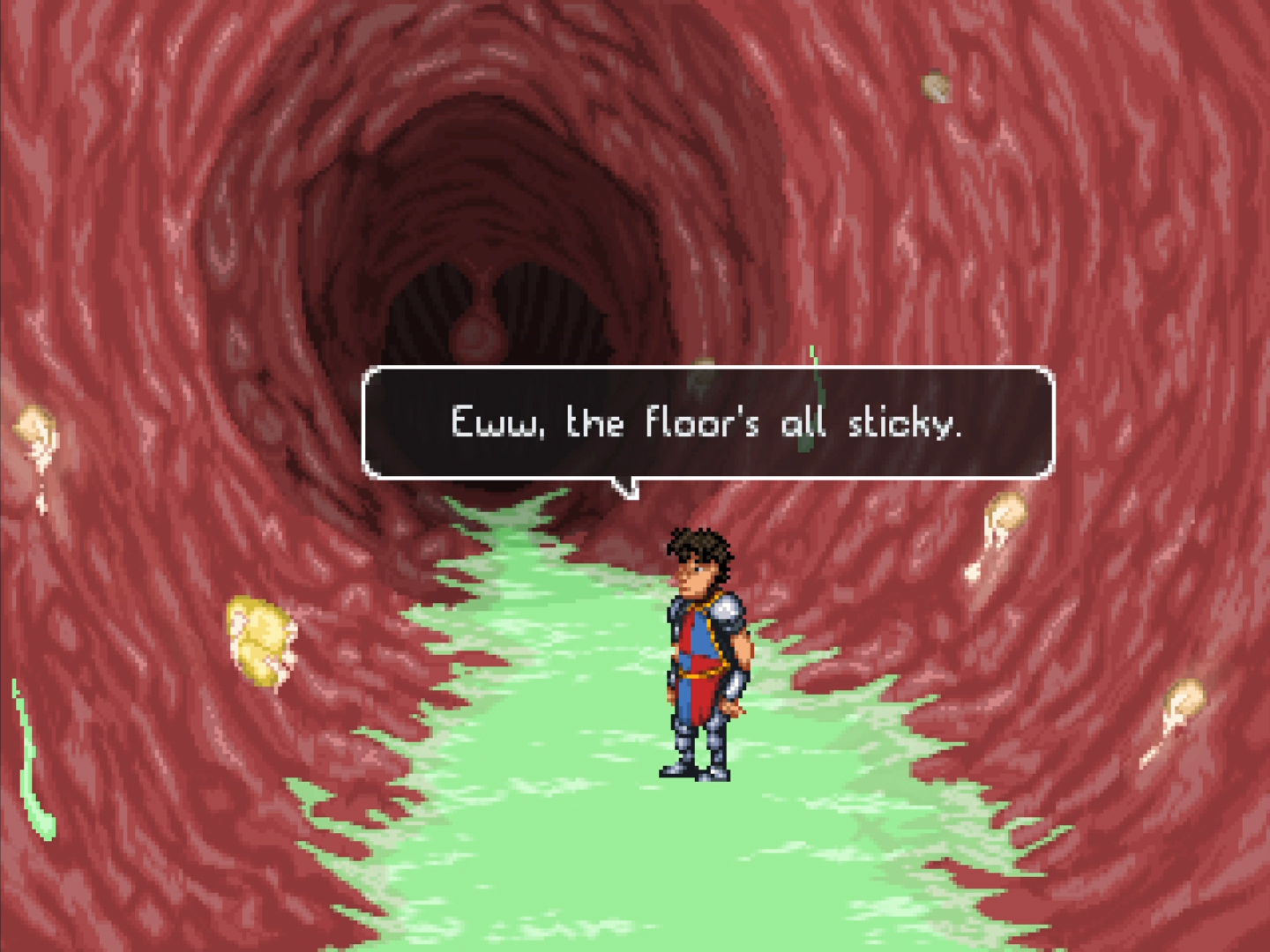 Adding to the sense of occasional slog, is the excruciatingly slow pace of movement in the game. To be fair, it’s using the Adventure Game Studio engine, so for all I know that’s just a limit of the system, but the characters physically move so sluggishly that it takes several epochs for Tondbert to walk from one side of the screen to the other.

My total playtime was around 7 hours, and I roughly estimate about 20% of that was spent waiting for him to arrive at his destination. Keeping with the time-traveling theme, can someone please go back in time and send this medieval guard a Segway? 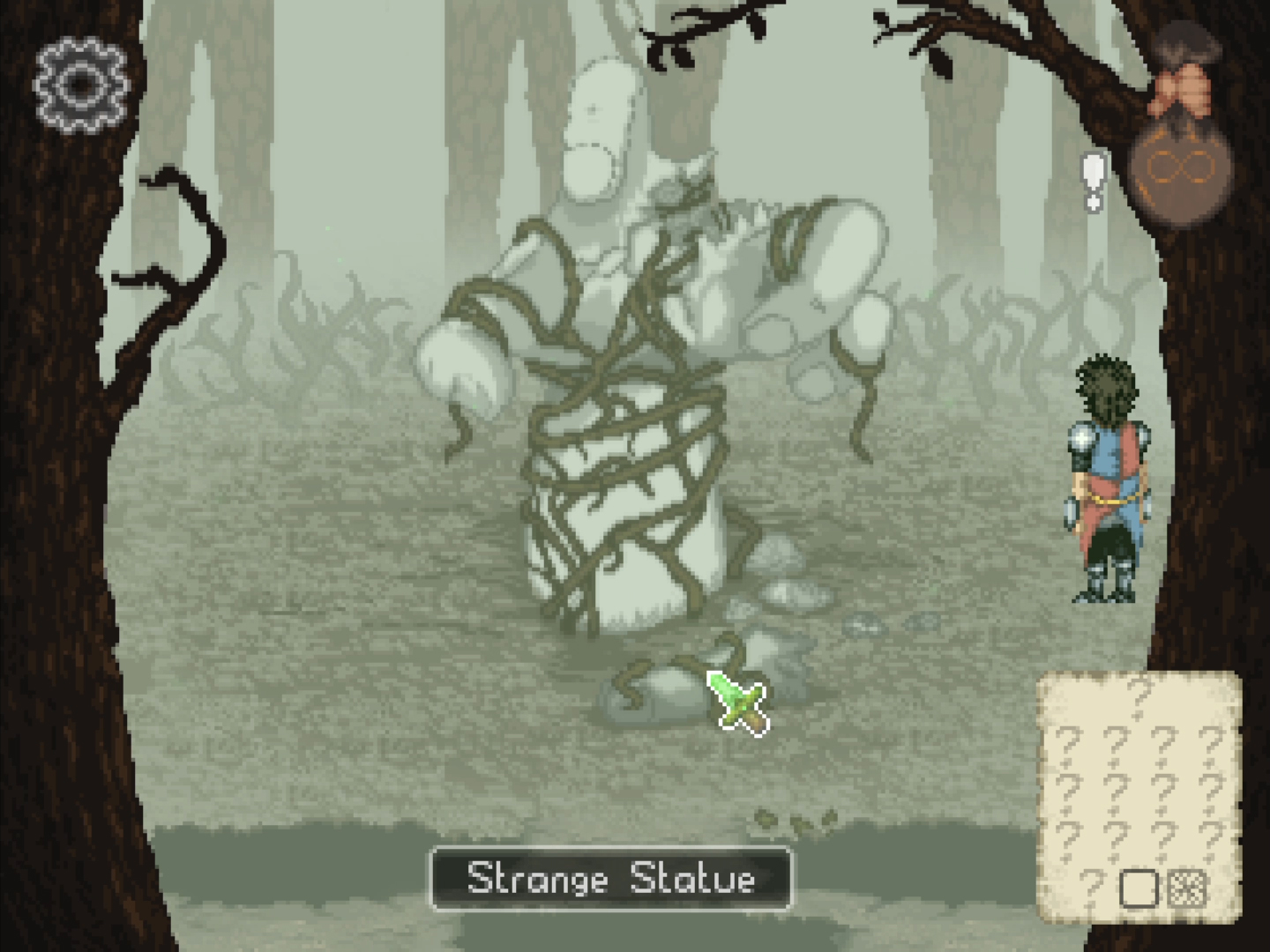 My biggest issue, though, was the last act of the game. You spend the bulk of your time in merry-olde Wrinklewood before being hurtled into the dystopian future of 2074. The problem is that the entire tone of the game shifts along with this change of setting, and suddenly all of the humor and charm that comprised Tondbert’s adventures are stripped away and replaced by the gruff, overly-serious, and somewhat bleak future that Starborn inhabits. I realize that’s part of the point, but the shift is so dramatic that it literally feels like you’re playing another game entirely.

This is not helped by the shift in puzzles as well. For whatever reason, the majority of the third act plays as if its on rails. Many sequences are exposition heavy, and come across like extended cut-scenes, with little to no input from the player. Likewise, crucial moments (such as when Starborn battles guard-bots, manipulates the time machine, etc) are automated, and seem like a huge missed opportunity for new puzzles or interaction. It winds up being so automated that there really isn’t a whole lot for the player to do, except occasionally direct Starborn to walk (slowly) from one side of the screen to the other. 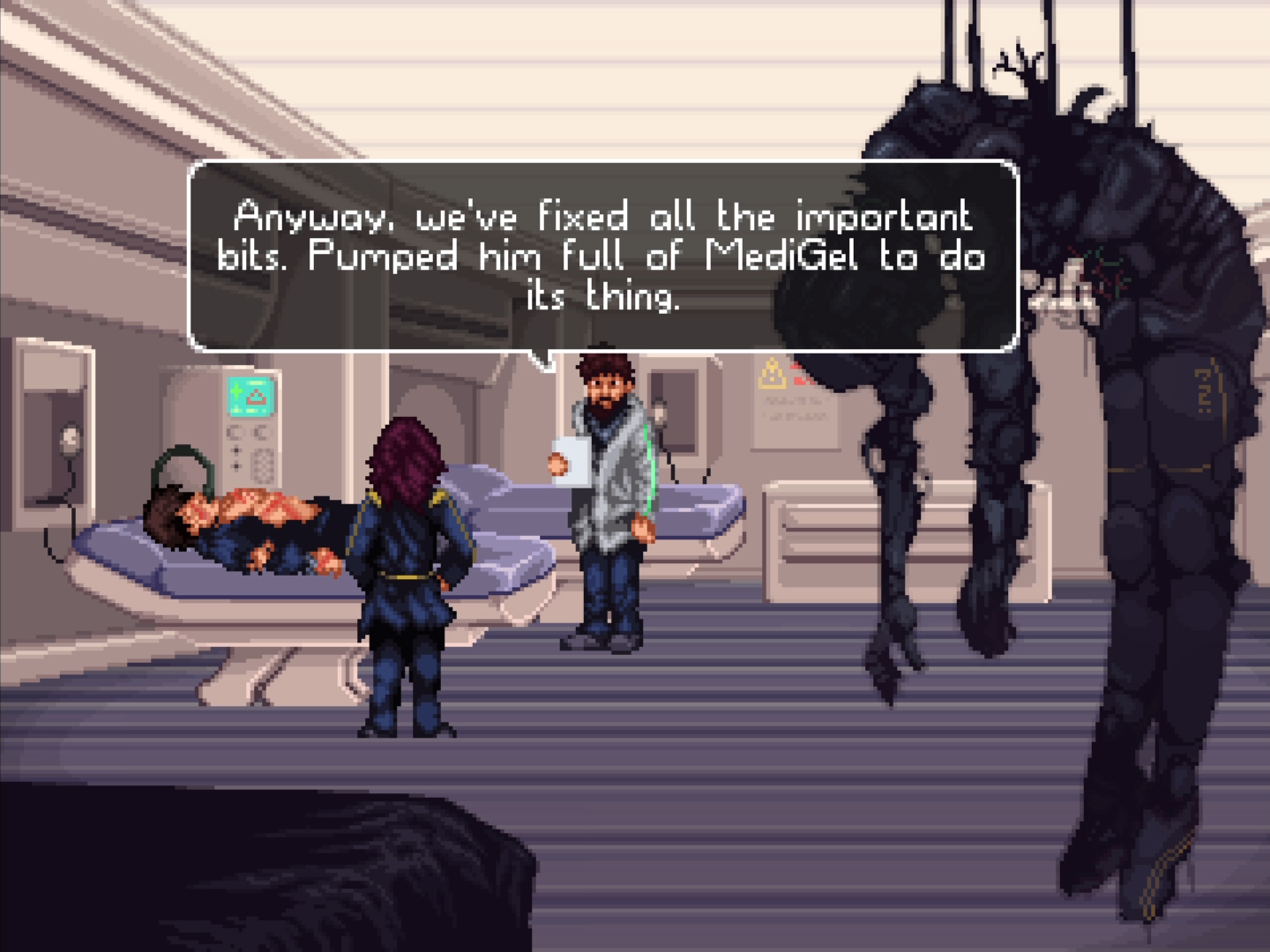 Even the inventory mechanic from earlier is replaced by a system where objects are used automatically when needed, so you never get the chance to interact with items in a meaningful way. I suppose this change is meant to reflect the “futuristic” nature of the final act, but it neuters the gameplay more than enhancing it.

If I were a cynic, I’d say that the developers simply ran out of time, and rushed to finish the game, thereby robbing the final act of some much needed depth and engagement. Is it enough to ruin the experience? Absolutely not. But it does mean that Guard Duty ends with a whimper, where it deserves to end with a bang. 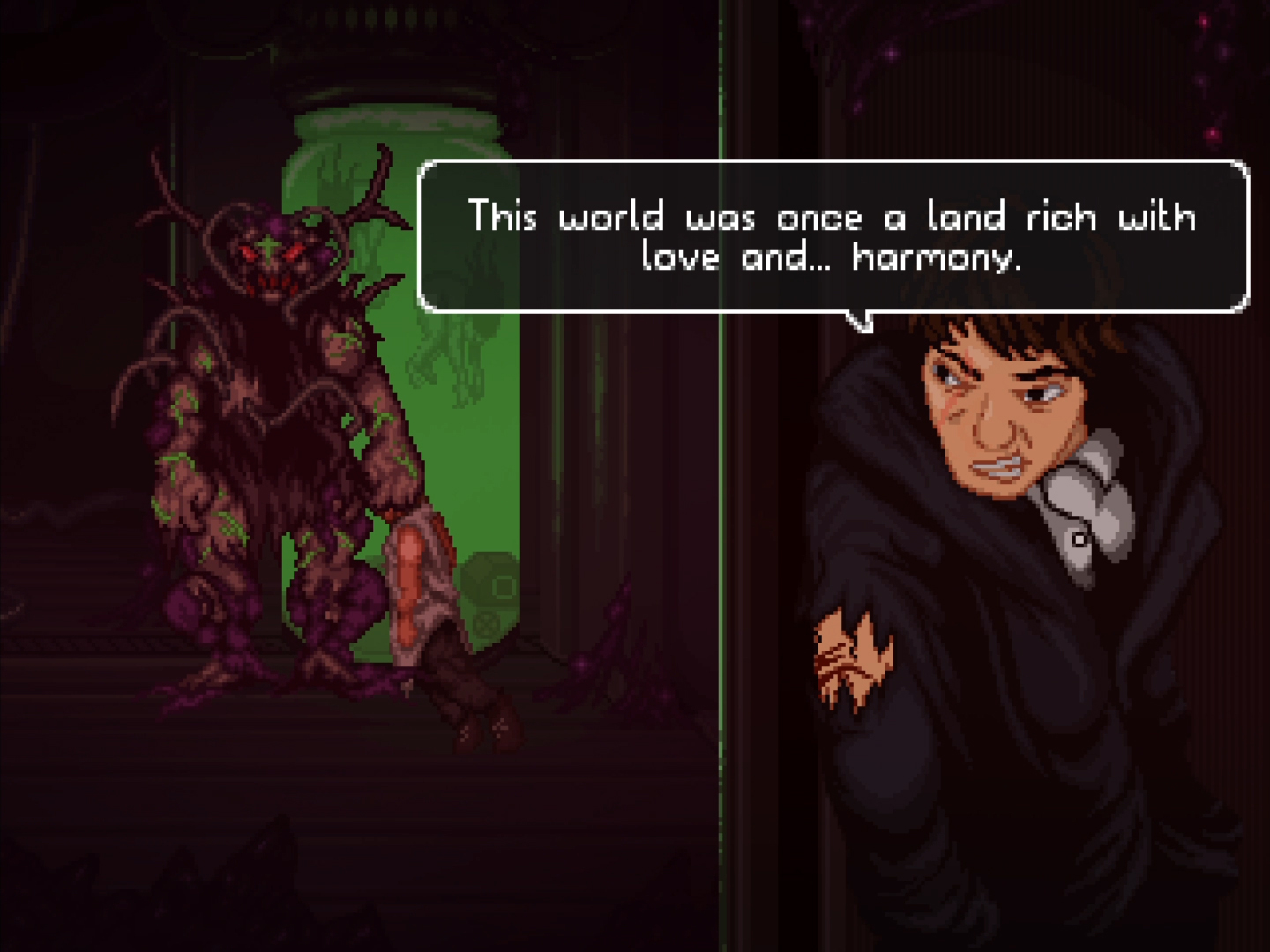 Still, the vibrant artwork, buoyant humor, and accessible puzzles make up for these flaws, resulting in an overall joyous jaunt through the Wildlands of the past and the future. Short on stature, but long on charm, Guard Duty is a point-and-click adventure worth every bespoke pixel. 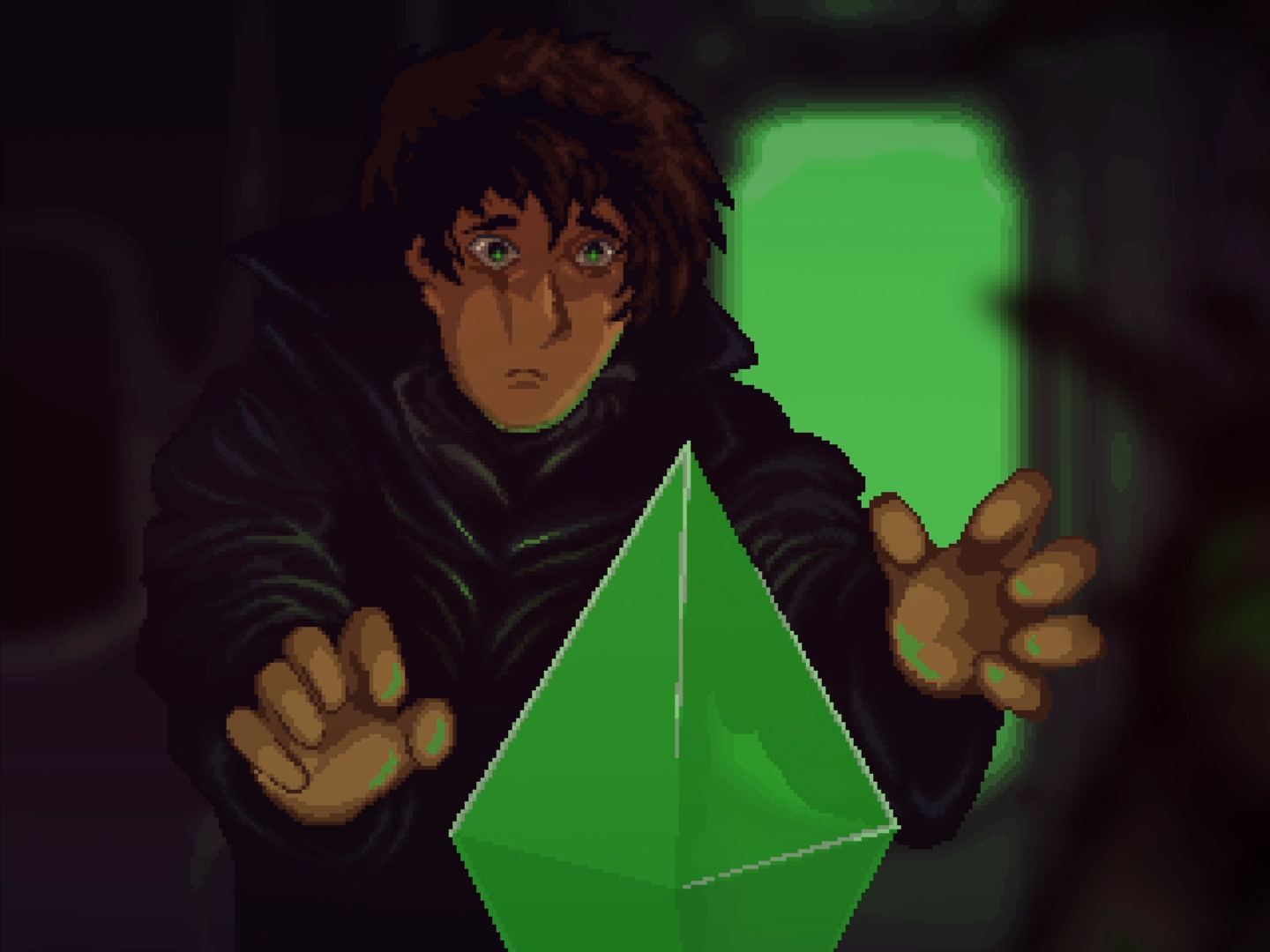