Chromatic Aberration is a Pixel-Art Action Shooter that tries to be a “Doom Clone” but just falls short of standing out.

Welcome to the Neon-lit city of Malice

Chromatic Aberration touts itself as a single-player action orientated Pixel-Art shooter with fast combat, bullet-hell enemies, and satisfying weapons. It uses a mix of 2D sprites in a 3D environment and says it is inspired by great games such as Doom, Duke3D, Megaman and influenced by an age where there was no “First Person Shooter” but games instead called “Doom clones”. Does Chromatic Aberration have what it takes to be worthy of a classic FPS? Let’s find out! 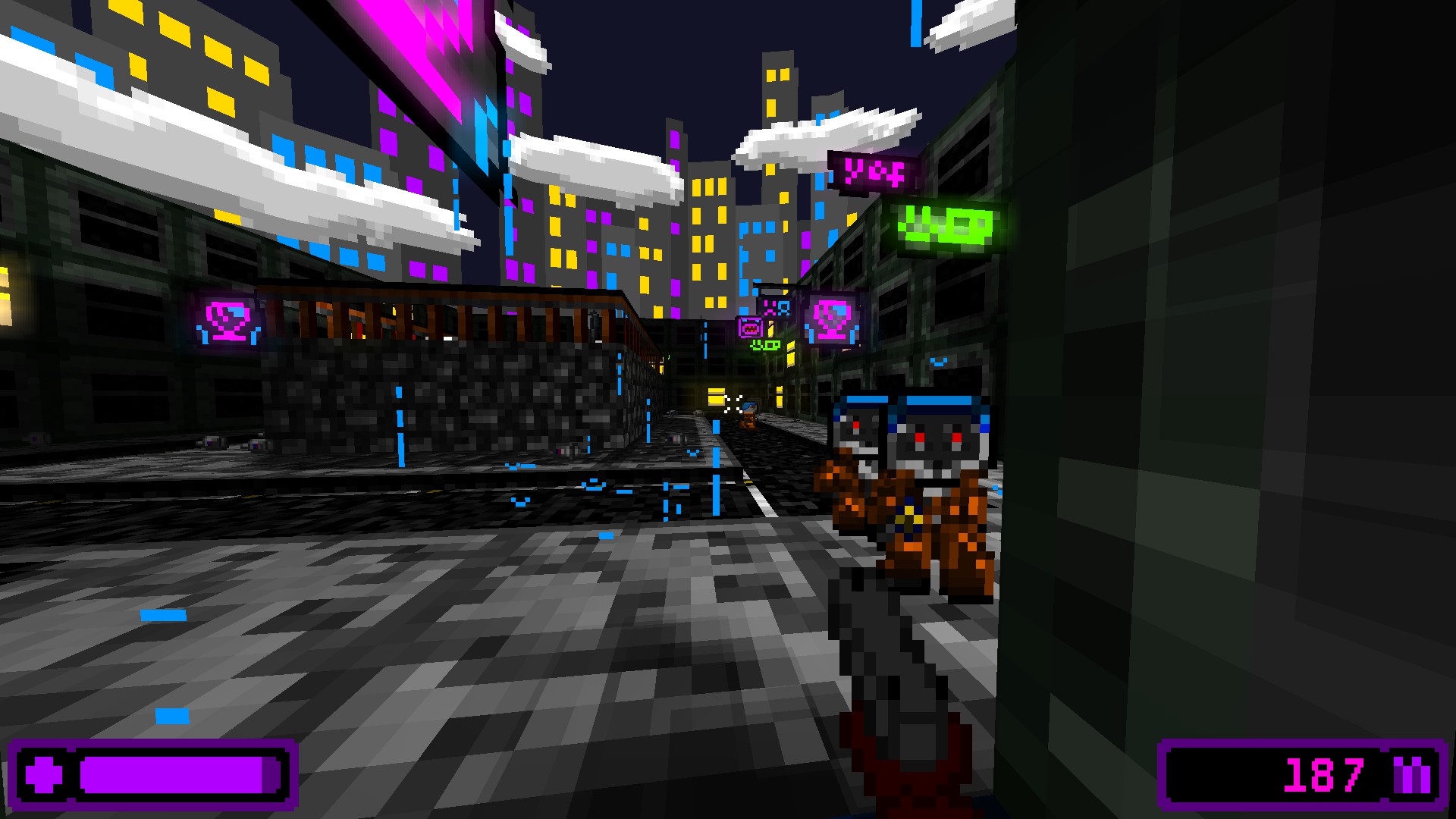 What first drew me to Chromatic Aberration, other than saying it’s a classic FPS, was the graphical choice. I thought it looked pretty interesting from the screenshots and even after I started playing, I enjoyed the graphic style immensely. The game does have some different “styles” that you can choose from the options, but you can’t do it while in game. You have to go to the main menu each time you want to change it, jump in the game, and quit back to the menu to change it. It is kind of annoying when I wanted to see what each thing did and how it changed it, but I just ended up turning it all off for how annoying that was. Once you are in the game though, some levels look very well built and interesting, then some just feel boring and slapped together. I found it to be a mixture of some great areas, then the next would be an ugly and boring cave. The city areas do look nice, and have lots of neon-like esthetics. At one point there is even a lovely forest area with autumn colors, though it’s ruined with the city skybox. The worst areas, though, are the caves as they just feel like they were strung together. These are definitely the most boring levels in the game, as they feel the least creative, and all the same.

The biggest mistake that Chromatic Aberration makes when trying to be a retro FPS is in its level design and secret areas. This game does not have ANY secrets hiding in the game, at least that I’ve been able to find. If a game claims to be a retro FPS, you have to have what made retro FPS games great, fantastic level design that allows for exploration and cool secrets to find. Chromatic Aberration sadly doesn’t provide that satisfaction. 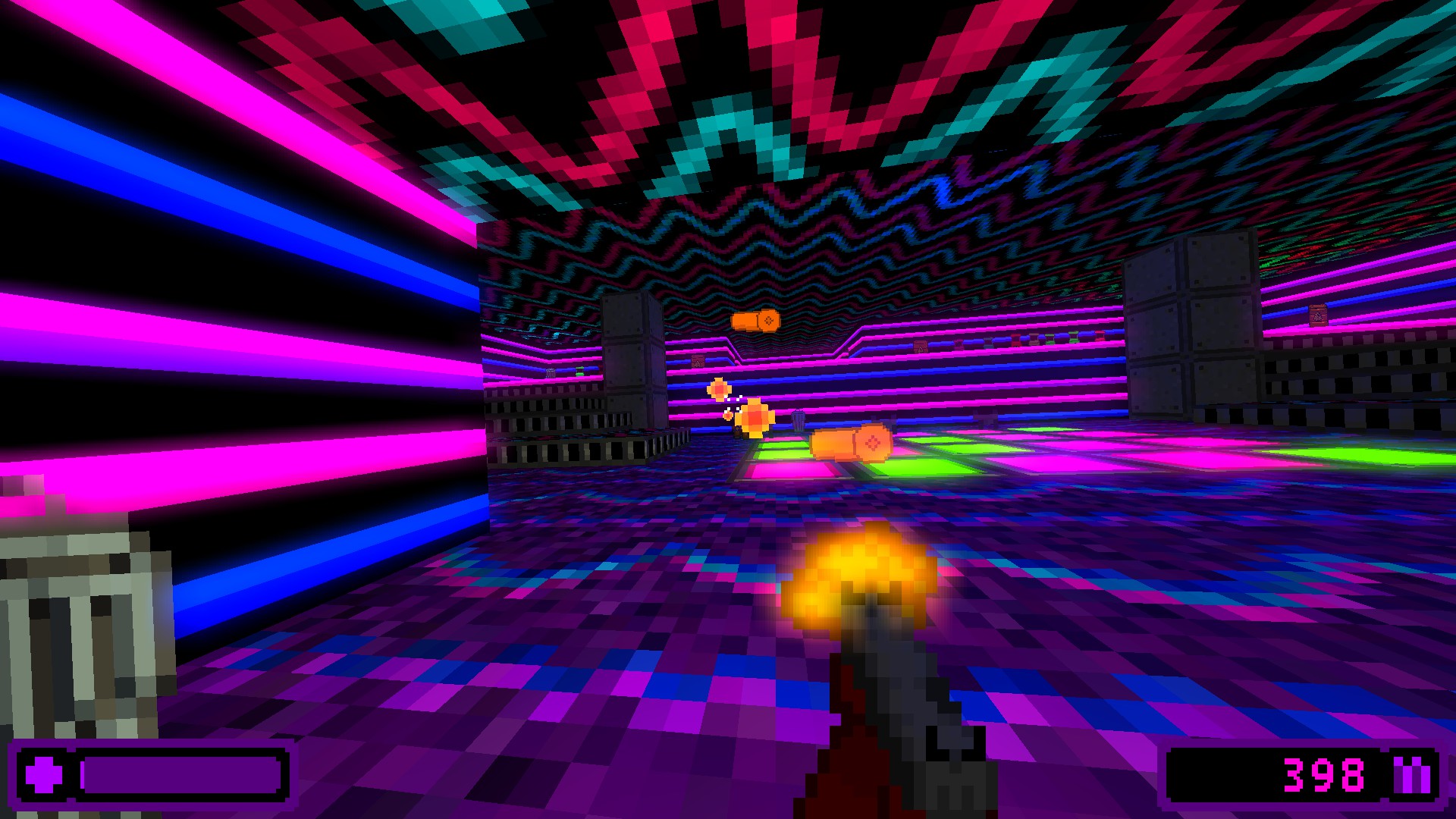 The story of Chromatic Aberration is that Humanity is nearly extinct. AI has risen and taken over the world with the sole intention to mow down any human that they see. You are one of the humans that is just surviving. When some guy bets you $5 that you couldn’t walk down the street with a pistol, your rampage begins as cyborgs start attacking you. You are then recruited into the Human Resistance Forces to help humanity to survive and help bring down the AI overlords. It’s a simple enough story that works. It won’t really keep you invested through the entire game, and it is told through NPCs that interact by telling you what is happening. Don’t expect tons of dialog, as there aren’t too many NPC’s with any lines. Players can expect maybe one NPC in each map.

The music selection is OK, though nothing really stands out as being memorable. There is no set music for each level, it’s on a track list that rotates as you enter a new map or reload a save. The levels don’t have sounds to them, at least for anything that you can notice. The weapon sounds are decent and are passable. The enemies don’t have very many sound effects though, as all the cyborg enemies sound the same. The others have some different audio, but it does not vary all that much. The enemies don’t have any sound effects when they are moving other than the cyborgs where they have what is sort of a “jumping” sound. 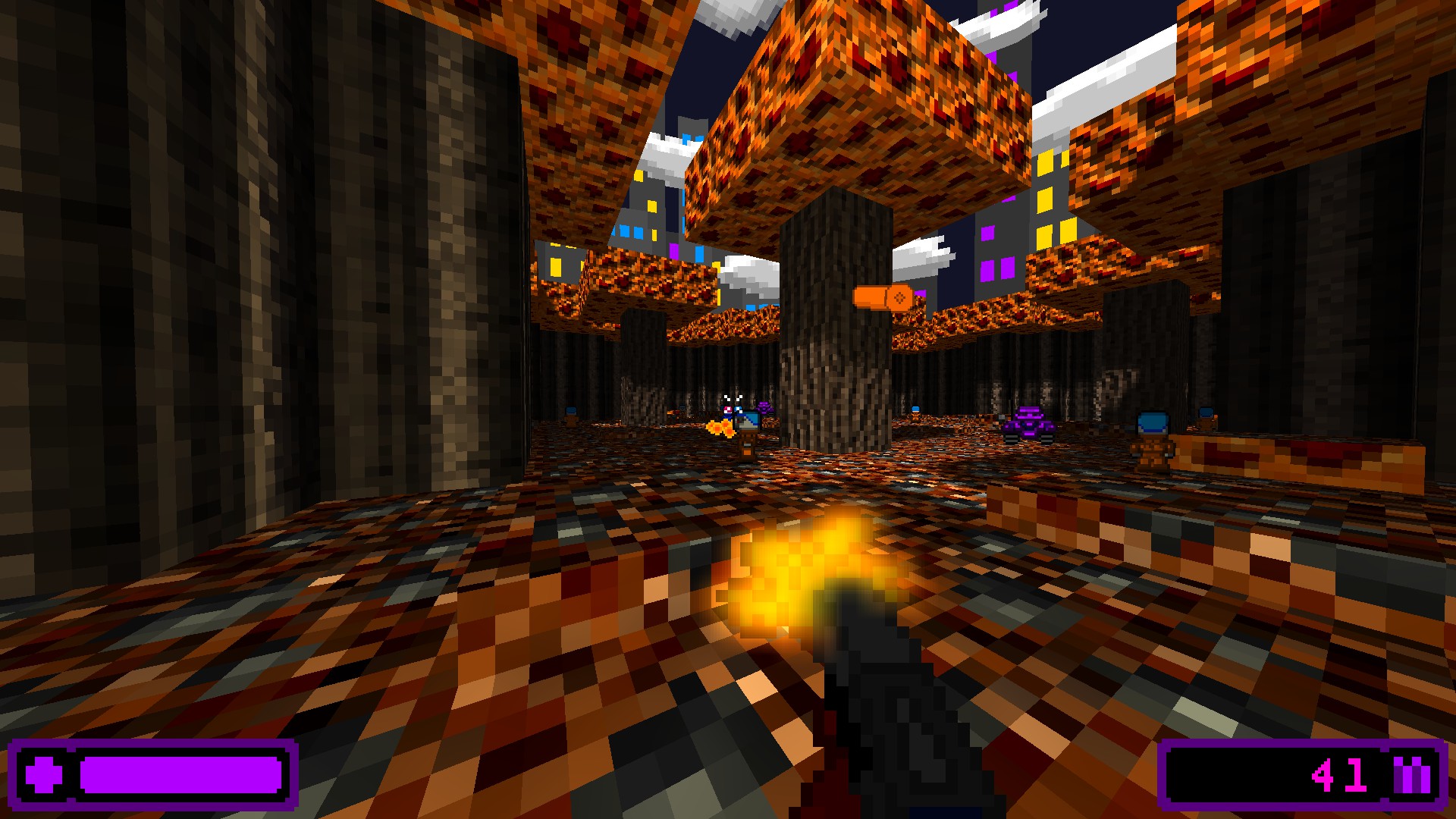 The weapons you will be using in your adventure range from a pistol, SMG, shotgun, mini-gun, flamethrower, and possibly a few other weapons, though I wouldn’t know as I never finished the game (which I’ll explain later.) The issue is that once you pick up a new weapon, you don’t really want to use the last weapon as they just feel underpowered and useless, especially against the tougher enemies further into the game. The pistol starts to take more shots to kill, as with the SMG, and so on. Some weapons, on the other hand, tend to be helpful for certain enemies. For example, the shotgun tends to be very helpful when dealing with the tanks. Compare this to the flamethrower which doesn’t seem to work very well against the tanks, but will melt through every other enemy with no problem. When you kill a cyborg, they explode in nice pixelated gibs… even with just a simple pistol. It’s funny at first, but after a while it loses its charm.

One issue that I found was that even if you had full ammo for a gun, you could still keep picking up the ammo. So, you would be wasting an ammo pickup. Not that it’s a big problem as you will usually have more than enough ammo to pick up throughout the entire game. I did notice that the minigun ammo was pretty limited other than when you first get the weapon. 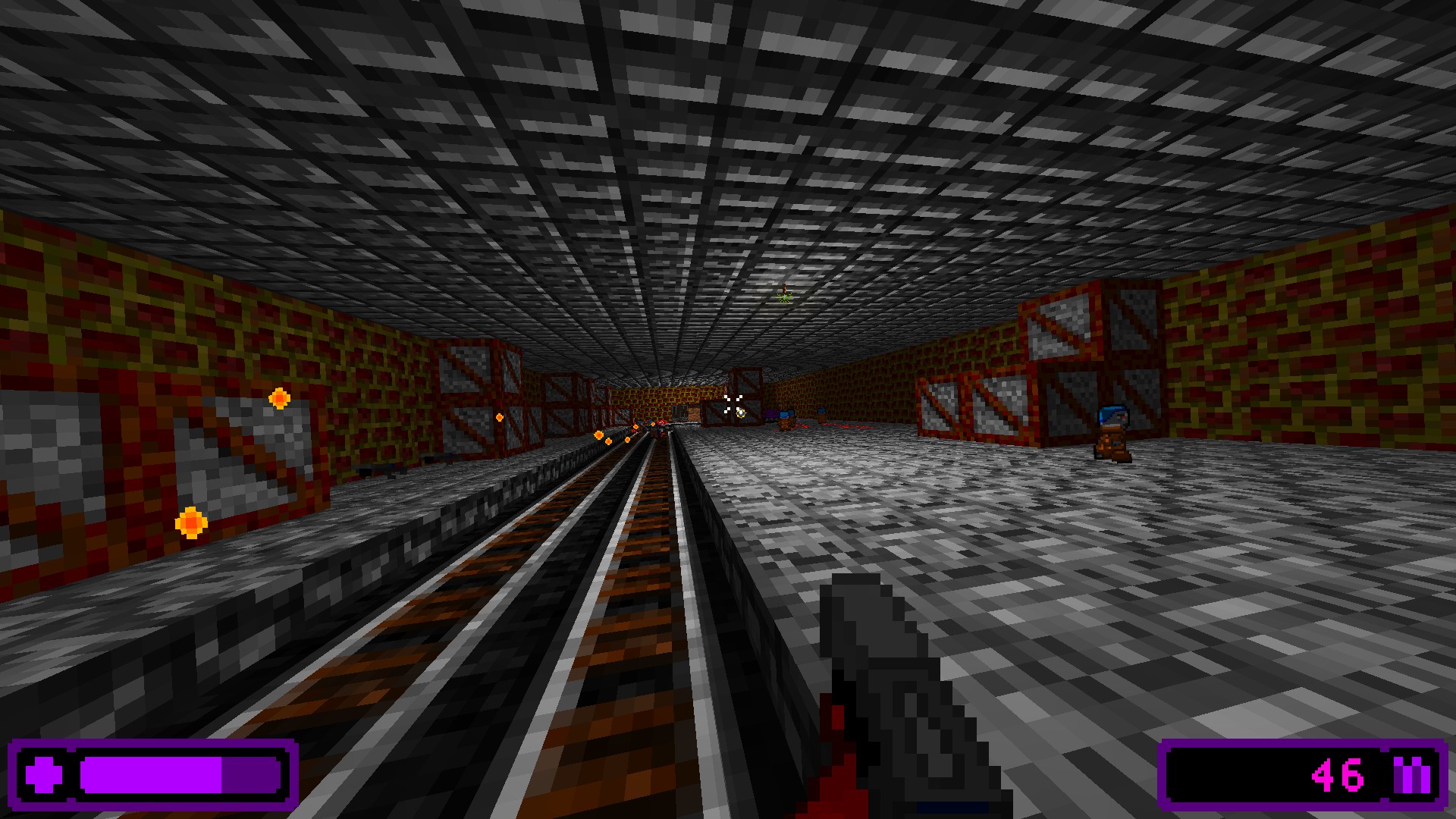 The health, however, is a completely different story! As you play through the game you can pick up health packs, which don’t add a whole lot of health, but that’s fine as the game is supposed to play like a bullet hell. The problem is that not every map has health packs! Yes, I’m dead serious! You don’t even have to wait long to find out, as the second level puts you through this! There are levels that just won’t have a single health pack, so you have to save scum the entire level because you can’t afford to take damage through it. There were a few levels that I scraped by with just a sliver of health left. Once you get to the next area you get full health again, but then it usually mocks you and spawns a few health packs in the next level right at the start. This lack of health packs has happened three times for me and once I reached that third time, I just dropped the game. 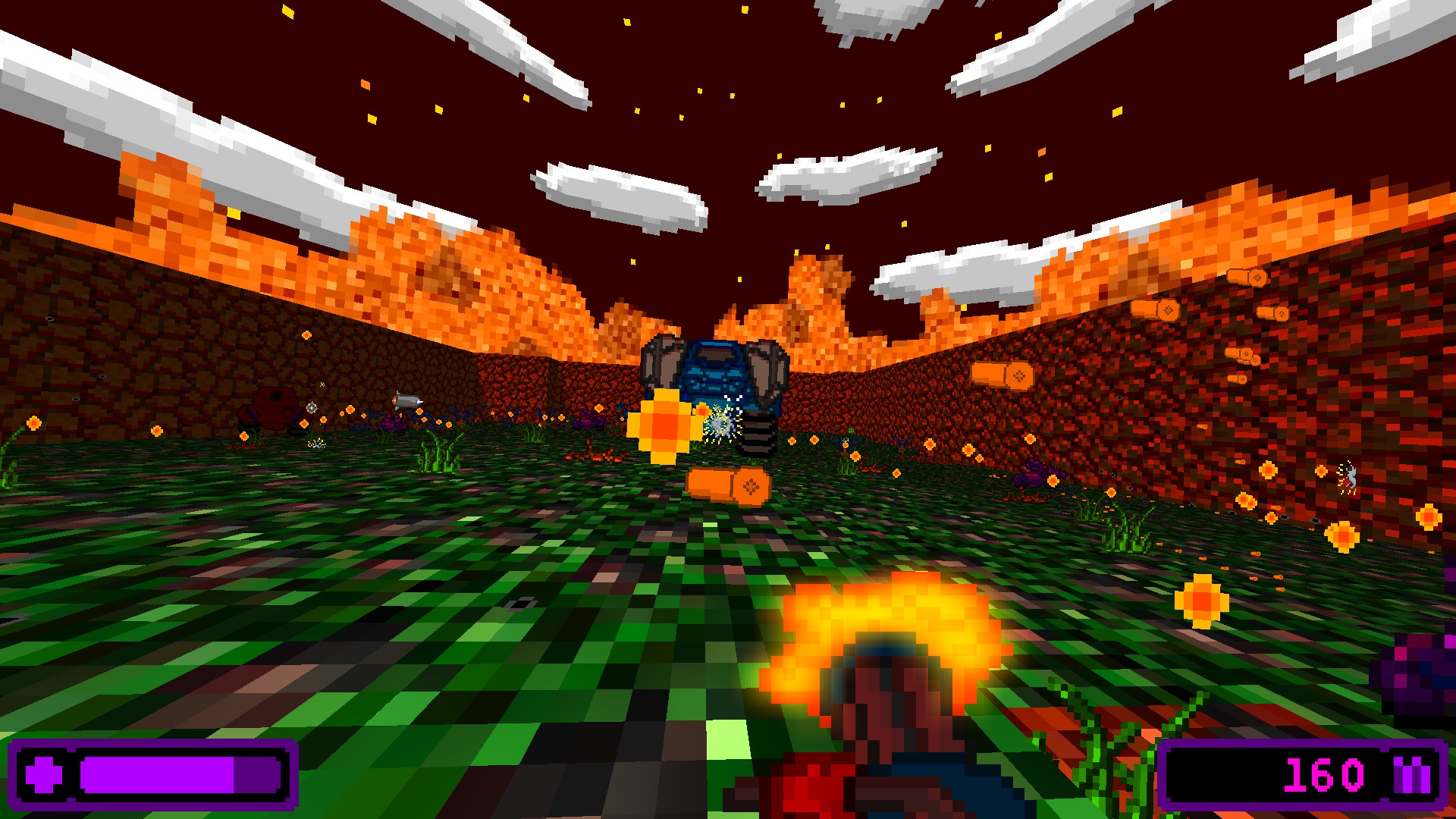 Most of the enemies have a bullet projectile and are pretty easy to dodge. The cyborg enemies are fairly easy to kill depending on what kind of weapon they have. They will have a single shot, 3-shot, or shoot multiple shots. As you progress you will fight against drones and even spider-like creatures. There are also bosses in this game, with one boss being a big tank in a large arena room with lots of cover and ammo. The other boss fight was against another big tank and an APC that spawns drone enemies, though it’s in an open room with no cover at all but does provide a fun bullet hell style boss fight.

The worst enemies, however, are the Purple Tanks. Not only do they shoot missiles that explode, but they also have a hitscan shot that you can NOT dodge! You also don’t get a warning about the shot either. On top of that, the Tank deals a lot of damage. It took me a while to figure out why I was being damaged when there were no bullets flying, till I saw the tank shoot me. What’s even more annoying are that the explosions in this game are not consistent in splash damage. Sometimes I can be right beside the explosion and not take damage, then the next time I could be around a corner and take full damage. The tanks also explode when they die, and this sucks as these tanks become a common enemy and are even placed in small places. Combine this with the lack of health in some maps, and it makes things extremely difficult to the point where you have to save scum if you take too much damage. There is one problem though. 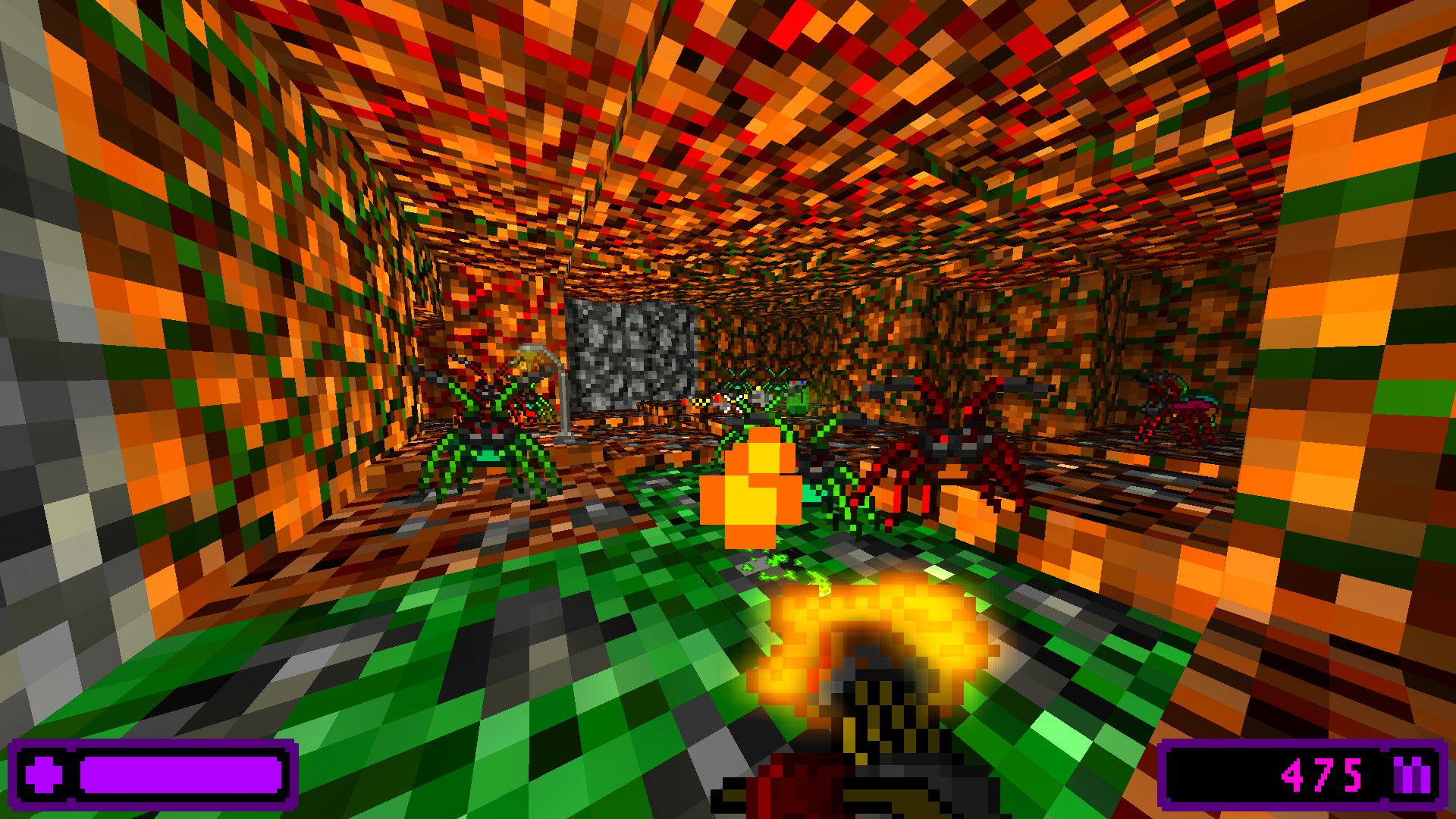 The game give you three save slots… or in other words, three different playthroughs that you can have at one time. The problem is that each save slot is only one single save. What do you mean? Well, the game has autosaves, a quick save/load option, and a manual save/load option. The problem is these ALL share the same save slot!! As I mentioned earlier, quite a few maps have no health packs so you will be save scumming to avoid most damage to make it through the game. The issue is, if you happen to save in a bad spot then that’s that, your game is toast! There isn’t an option to restart the level either, your entire game is stuck to the one save file.

So then what happens if you DO screw up your save? Guess what, you have to completely start over! Which is what I had to do, twice! The first time was before I realized that there was a lack of health pickups, and saved my game before a tank shot me, so every load would just be instant death. I was only a few levels in so it wasn’t a big issue, making me even more careful about my saves the next time. My final screw up was during a level that stuck 12 purple tanks in a small room when I already had low health. I tried numerous times, but could not beat it without taking damage. Since I had saved it with low health, I just gave up. I couldn’t push myself to play through the entire game again. 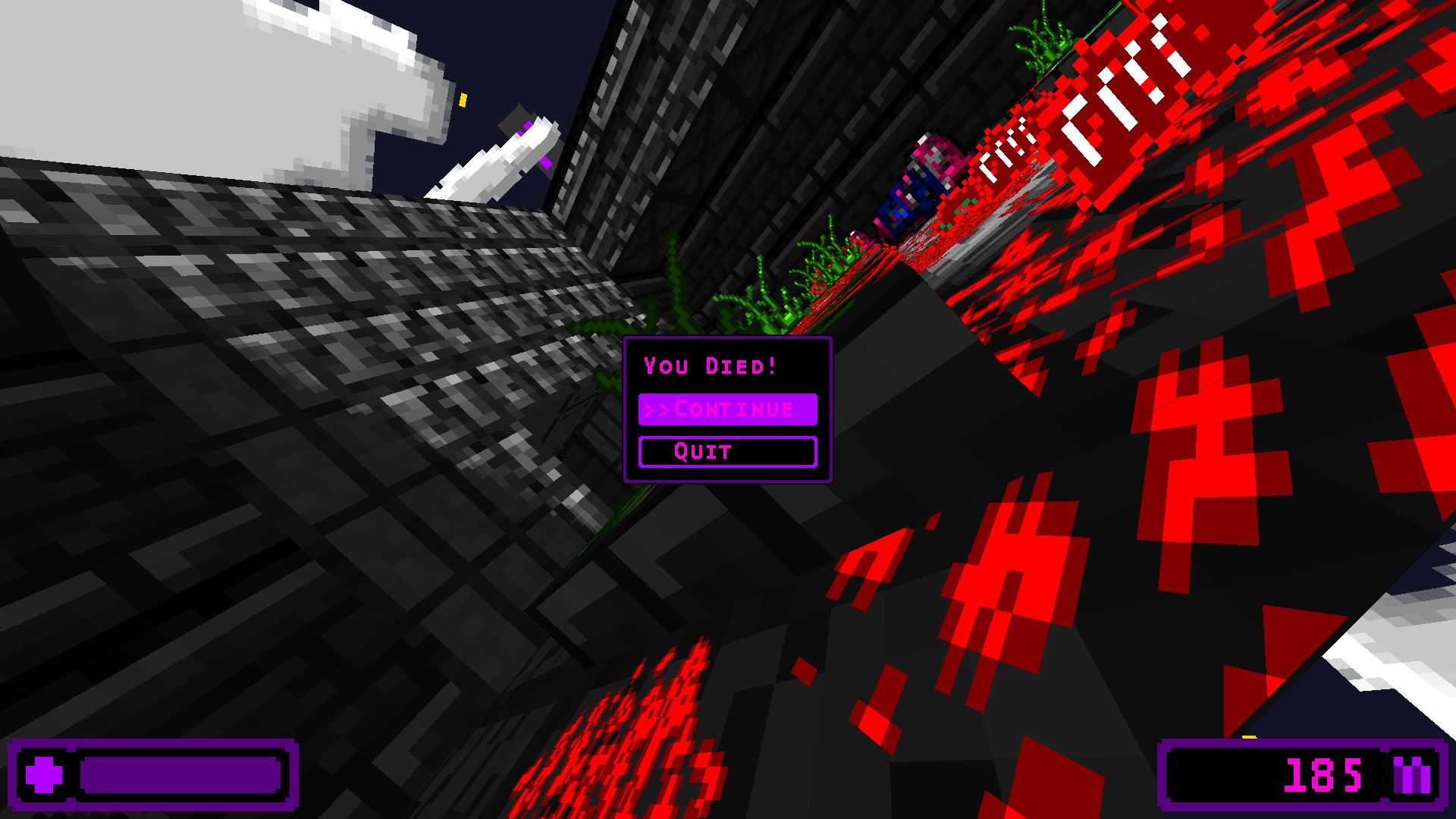 So with all that, the lack of health, cheap attacks the Tanks use, and ruining a save yet again, this is where my third attempt ended. Only now I have no plans on going through it all again. In the end, I felt bored and didn’t feel like finishing it, which is a real shame. I was looking forward to it, but with how the game is structured to be both extremely repetitive and linear, it just didn’t make it fun for very long. The game is painfully average. If you truly want to try out the game, then I’d say wait for a sale.