PVP and spaceships with BFGs!

Rival Megagun is an interesting take on the age-old side-scrolling shoot ’em up genre. In contrast to the mostly single-player focused games out there, Rival Megagun is somewhat of a contrarian to the norms. The focal point is the multiplayer which is so integrated and ingrained to the point that everything is built on this premise. Even the arcade mode. which is almost always a one player experience or 2 players co-op at most, has this competitive multiplayer aspect built-in. Is this necessarily a bad thing? Not at all. Rival Megagun, in its single-mindedness, made it all work somehow with a unique competitive twist.

The story is about six pilots and their gunships participating in a competition of sorts to destroy mean aliens, called the Harvesters, that have been obstructing Earth from moving resources around in orbit. The arcade mode, which also functionally serves as the story mode, focuses on one of the playable characters which will highlight their motivations to compete while making some banter when encountering other characters along the way. My personal favorite is Dr.Magic, an ex-supervillain who got mad about how those aliens have been taking his villainous spotlight away and infuriating him enough so he wants to destroy them all. Each gunship is unique and has different attack patterns.

The very first thing that you will notice when you start playing Rival Megagun in any play mode is that the screen is split into two. No, you did not accidentally select 2-player mode, this is how the game normally is. The core gameplay is the same as any top-down shoot ’em ups. You navigate around horizontally and vertically to avoid various energy bullets while shooting down enemies that are varied from stage to stage. The gunship can only take two hits and have access to a bomb which can clear all hostiles and projectiles currently on your side of the screen but that is where the similarities end. Unlike how this genre usually works, the sole objective of Rival Megagun is neither to get to the end of the stage nor to beat the boss. Instead, the focus is to destroy your opponent on the other screen. The game will not end until one of the players is defeated. 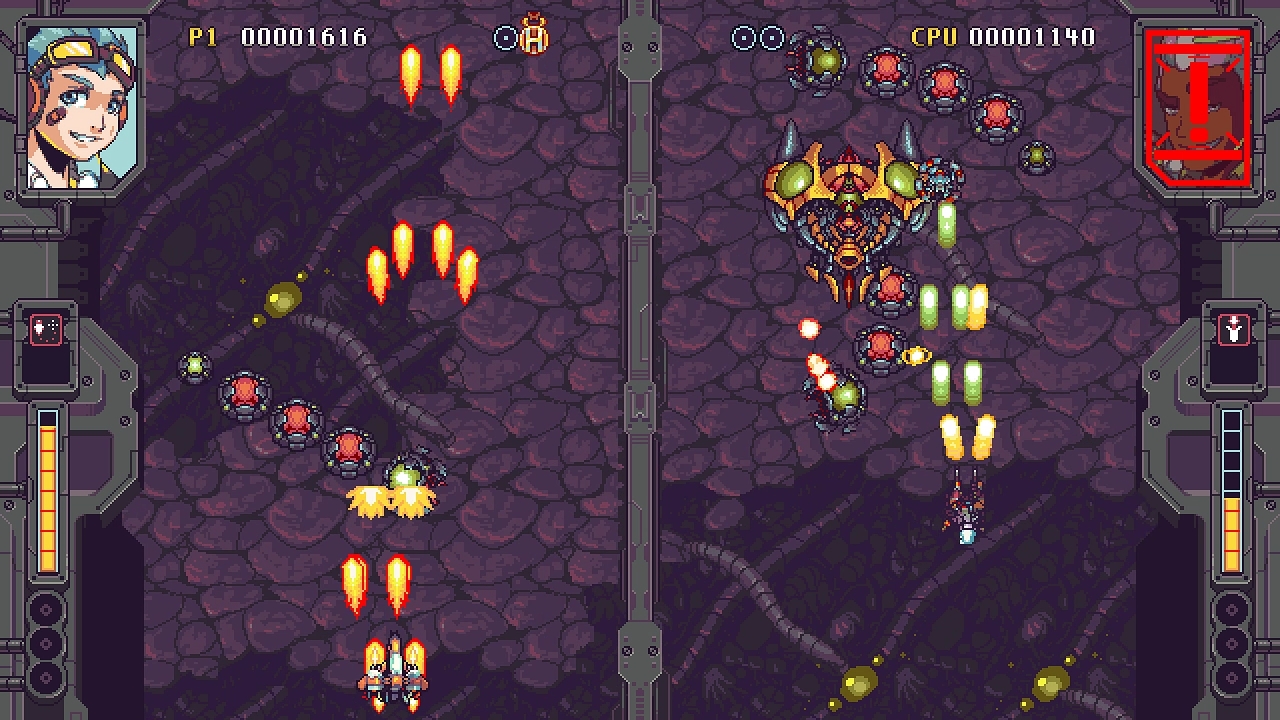 Players have three primary tools to attack and harass their rival. First, you can summon drone spawn points to your opponent’s side which will happen automatically once your hit “counter”, also known as chaining, from killing consecutive enemy ends. Another method to attack is a more direct and controllable approach which has to be manually activated. This attack requires at least one level of HIT meter to activate and is executed by holding the leftmost face button to charge up until it reaches the desired level. A HIT meter has 8 levels and can be charged up to use any attack level you desire as long as it does not exceed the maximum amount of meter you currently possess i.e. level 7 attack cannot be used if you only have 6 levels of meter. HIT meter is gained from destroying enemies and also influences your current attack power. Generally, the number of attacks that will be appearing is equal to the number of meter levels spent and will consume one level of HIT meter regardless. These attacks are telegraphed on the screen for a moment via warning symbols so the players can react accordingly. Manual attacks are unique to each character/ship and can range from such things as a simple minefield to a tricky damaging and stretching wall, or even projectiles that traverse the whole screen vertically. 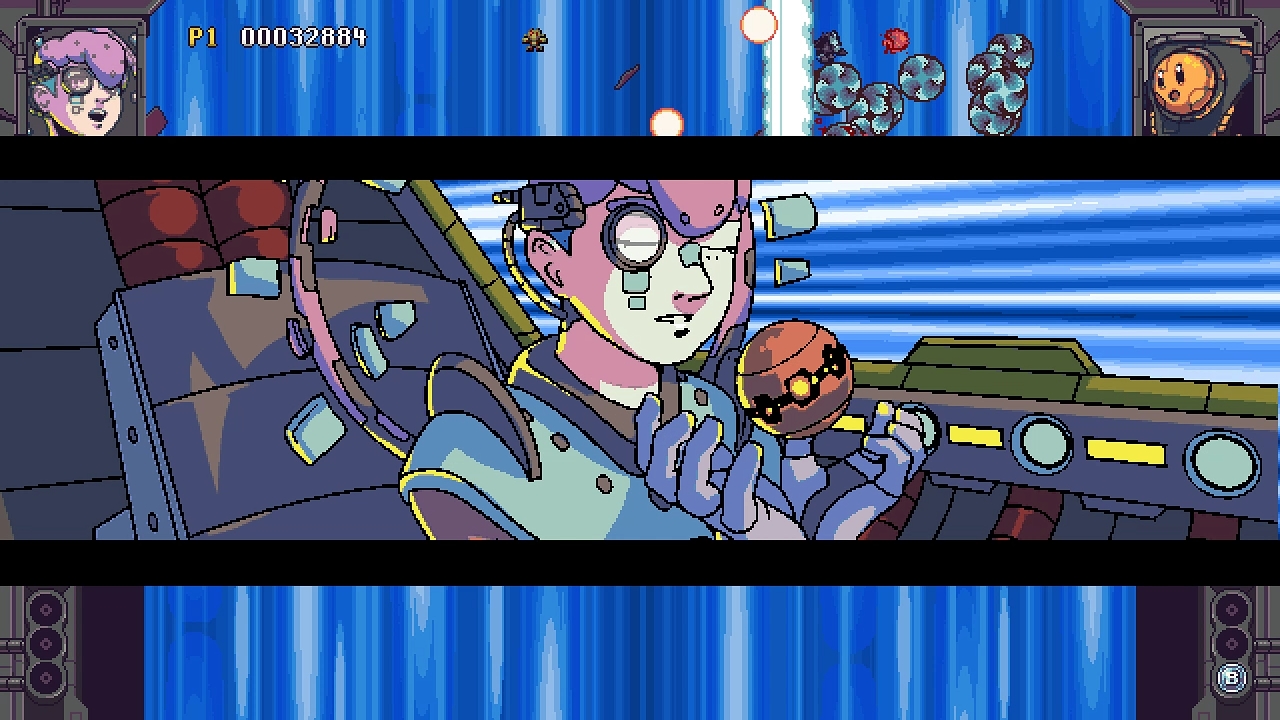 Last, and also the most important mechanic that sets Rival Megagun apart from other shoot ’em up games, is the Mega Gunship form which can be immediately activated the moment the HIT meter bar is maxed out. Your ship will transform into a boss that invades the other player’s screen and stays there until either the timer (HIT meter) or your boss hp runs out. It is always a treat to go into Mega Gunship form and feel the power of a shoot ’em up boss as you unleash a bullet hell obstacle course on an unsuspecting victim while the excellent soundtrack ramps up as you do so. In this form, each of the four face buttons will perform a different attack. Most attacks in this form can be directionally influenced by firing to get a better angle. Each ship has their own Mega Gunship forms with their own aesthetic theme and attacks. Needless to say, this form is immensely powerful and is an end-game move that you would use to go for the kill. Failure to defeat the enemy will leave you with no meter with a high possibility of having to deal with the opposing Mega Gunship in return. Weighing the risk and reward between using meters early on to perform attacks or to save them all up for end-game maneuver is a deliberate decision that has to be constantly made in order to succeed. 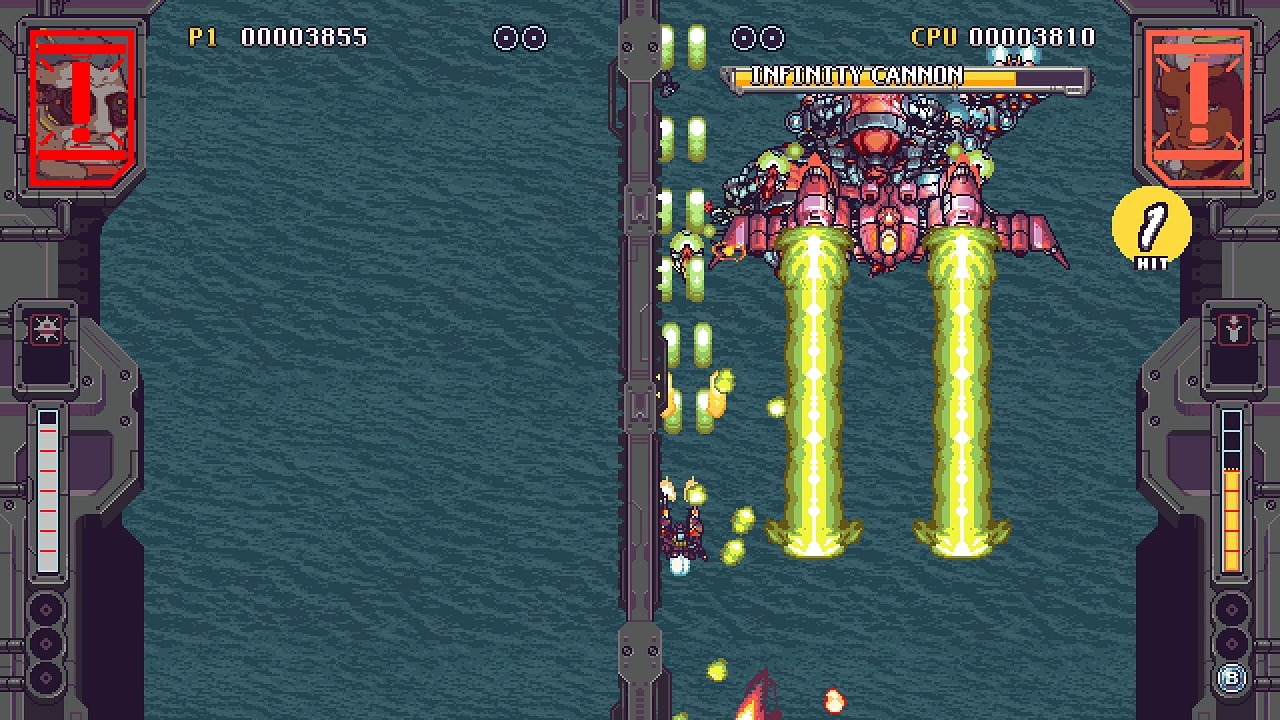 Rival Megagun is, to put in simple terms, a fighting game of the shoot ’em up genre. As such, the meat of the game will most likely come from the online component with infinite replayability if this is what you are looking for. However, it also suffers from the problem for most fighting games that are not from a powerhouse team, much like how NetherRealm Studios suffers, the single player content can feel lacking. This is not to say that the arcade mode is not satisfactory and has no replayability. Playing as different characters in arcade mode will deviate the dialogue. You can also unlock things like cards which are basically some background information on various things in Rival Megagun lore, and weapon parts which be used in any mode except arcade. However, if you are the type of person to finish the game once and be done with it then I fear the playtime might be on the shorter side for your liking. Regarding the online component, I would love to get more into the online component but, unfortunately, because I got the game prior to public release date I was not able to find any online vs matches. 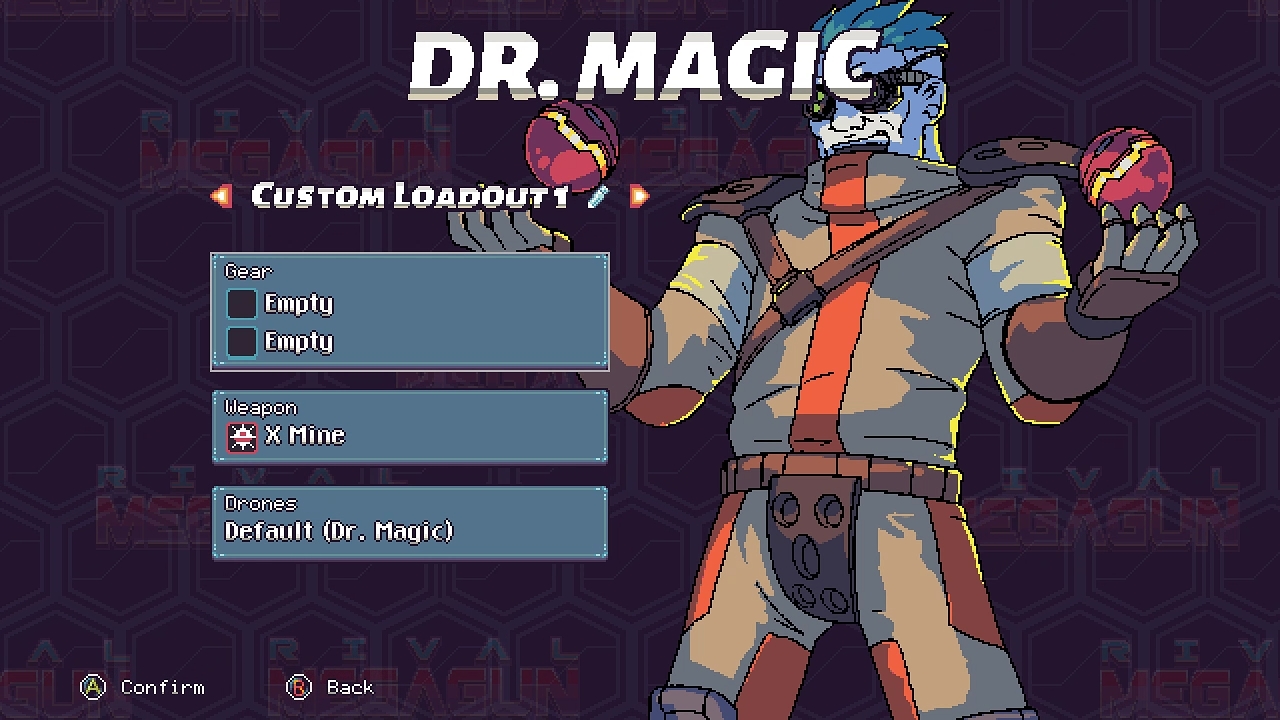 I personally love Rival Megagun. It brings a fresh take to the ol’ shoot em up genre. The permanent competitive split-screen style and the ability to make you feel empowered by transforming into a boss makes this game something special that has to be experienced. There are some minor gripes here and there, like the fact that the game is a bit light on single-player content and variety but this is somewhat relieved by the existence of unlockables and different playable gunships. In my opinion, the asking price of $14.99 dollars is a fair price point for something this unique even if you are not into the head-on competitive side. Overall, if you have even the slightest affinity for the shoot ’em up style games, Rival Megagun is a solid pick be it in terms of both value or gameplay.