Save the earth and prevent an alien invasion with the power of Metal in this Nintendo Switch exclusive musical rhythm game.

About Tak Fujii and Gal Metal

Many might not know him, but those who do, love him. Tak Fujii, known for his enthusiastic, humorous and entertaining appearance at the famous Konami E3 conference in 2010, left Konami in 2015 to join DMM Games as an executive producer. Gal Metal is his first big game since joining DMM Games and he has been a vocal supporter of VR. Gal Metal, a music game, is his first try at sound rather than surprise, but he is not unknown to music. He has played the E-Guitar in Castlevania: Symphony of the Night and even composed for the game Poy Poy. So, he definitely has some pedigree in music. 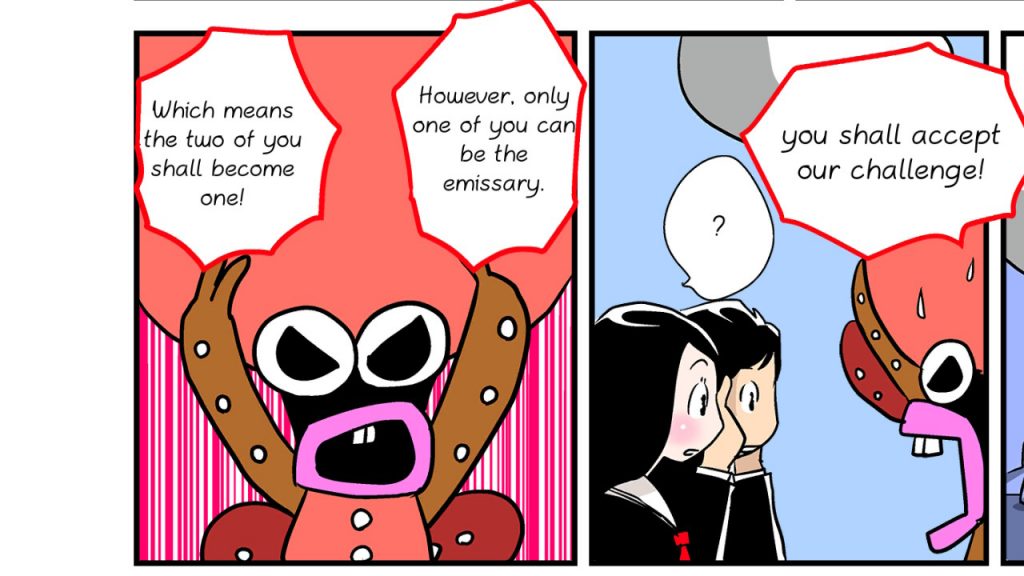 When our hero was on the way home from school, destiny planned something else for him. Without any warning, an alien ship kidnapped him and he found himself ,along with a girl named Rinko Hoshino, at the same place. The reason for the kidnapping? The Octopus aliens have chosen both of them as emissary’s to defend the earth against their attack. There is a catch though! Two emissaries are for some reason too many, so both are getting fused. Our main hero controls Rinko’s body, while she herself is staying inside his mind.

Why are they attacking? Because humans once sent out a satellite with their golden records to communicate with aliens, but the reality is that the metal music contained within the discs put the aliens in distress to the point where it was recognized as an attack. Fortunately, Rinko is already a part of a Metal Band and thus the fight against the alien invasion begins. 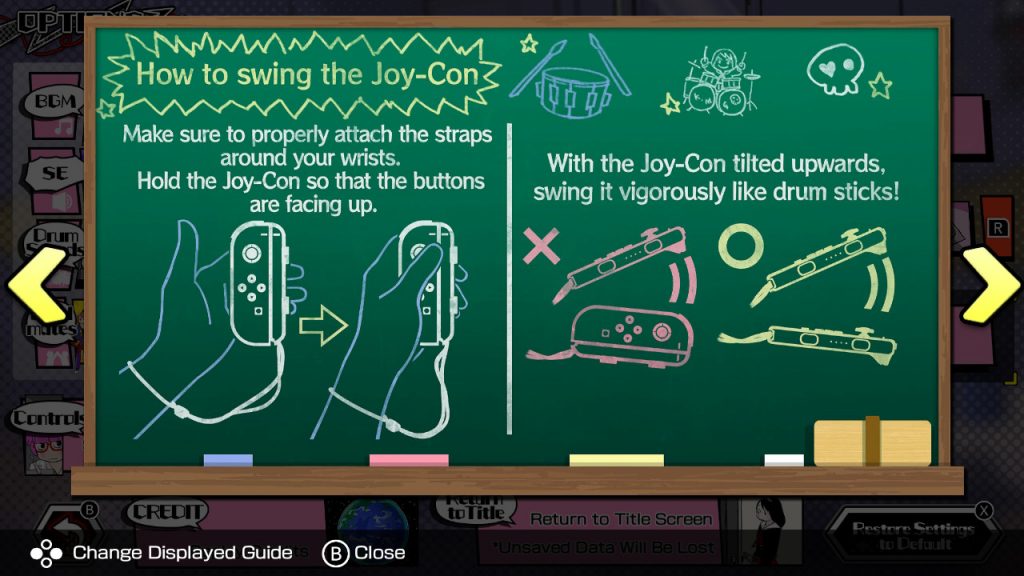 There are three control options available: Joycon, Screen, or Buttons.
The Joycon controls consist of swinging them to drum. The left is the Snare and the right one is the standard Kick Drum. There are also 2 modes available. One is less stringent and lets you swing them to drum, the other one requires players to simulate the drumming.
The latter two are pretty much self-explanatory and offer quite a few more different kind of sounds such as high-hat, etc. 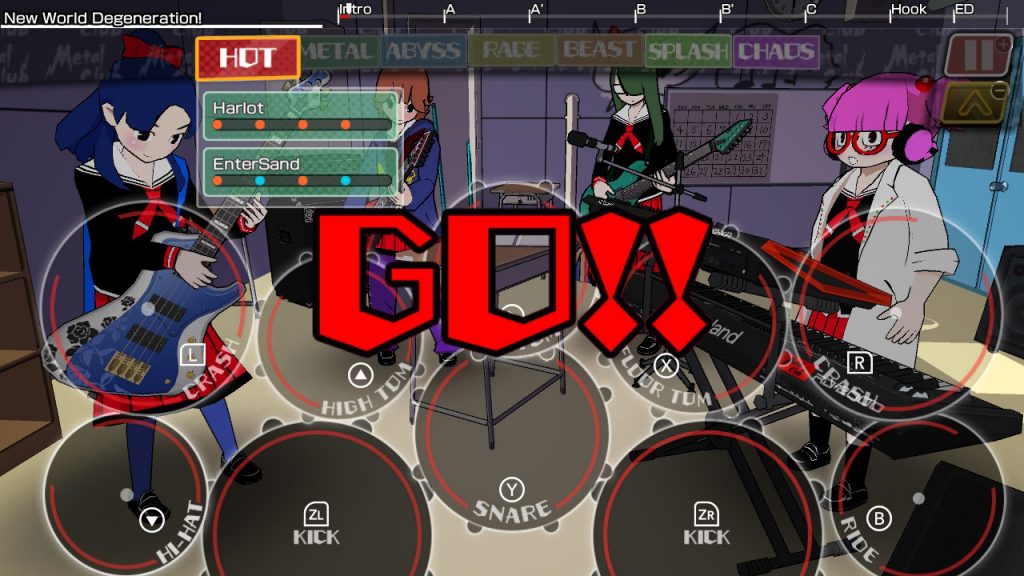 As with every other game that offers motion controls, the Joycon controls are my least favorite option. That’s partially because I’m more of a functional type.

The game is split into two parts: Free Time and Performance. In Free Time you can go to different places to socialize and unlock events with your team members. In doing so you can build up your stats for a better performance and build up your relationships to unlock extra character scenes. You also have the option to practice your next gig solo or in the group. Your Free Time is limited, though, by either stamina or time.
Within the menus, you can save, load, or watch past events again.

Once the Free Time is over, it’s time to perform. Unlike other rhythm games, there is no visual help. The only thing you have is a gauge that shows which part of the performance you are at and signals when to hit the correct rhythm. In fact, you’re free to experiment on how to drum as long as you hit the correct rhythm sequences, making it more freestyle. Additional visual cues do not appear when performing, making it a vastly different experience that is based around getting into the rhythm by yourself.

It’s important to note that each song will have a different kind of rhythm or tempo, some are slower while some are faster and you have to adapt your rhythm pieces to it. With each new song, new rhythms get unlocked for you to play and are even tagged as “Hot” to give you an example on what kind drumming can sound good in combination with the new song. If you feel funky, you can even create your own ones because, you know, it’s got to be funky ( editor inserted James Brown reference, sorry S-1 Icould not resist ) . In later stages, you will also meet opponents who can sabotage your drums, but fear not, you can prevent those actions.

Once the gig is finished up. Your score will be tallied up to see if you have passed the stage. Just in case you managed to get into the zone, every gig has a replay recorded. As a bonus, you can practice unlocked gigs and play around without any pressure from the main menu.

The first playthrough is very lenient and therefore easy and fast to finish, as there are only 10+ songs included. As long as you manage to hit your pieces a few times along with the rhythm of the song, it should be a piece of a cake to pass the level. The real challenge starts when you are going ahead with your next playthrough. The required amount of points needs at least a solid performance and a grasp of its scoring system. Mixing up the different rhythms, keeping up the combos and eventually even choreographing the whole song will be part of the real challenge and a deep gameplay. It’s a long way to mastery, including creating your own rhythms.

The game has a rather simplistic design reminding me of older manga such as Crayon Shin-Chan or Doraemon, but with modest coloring and is even presented as one by showing the story in panels while the scenes at school are just simple smartphone chats. Another nice detail is that character events are presented in a charming stick puppet theater style where you can even see the sticks carrying them from below. The performance parts are all in 3D, styled according to the established design, making it a well-rounded visual package.

Frankly speaking, I’m not too knowledgeable about music, but I was able to recognize a few covers of classical music such as “The New World” or “Ode to Joy”. I couldn’t find any disagreeable or bad sounding tracks at all.

Gal Metal is a very charming game that deviates from the rigid rhythm game formula and offers more freedom to the player. While it doesn’t have mindblowing graphics, it accomplishes what it sets out do extremely well in the visual department. On a personal note, this is the game I would have needed when I had mandatory drum music lessons in school. It manages to help the player to learn the rhythms in a playful and practical way.

Outside of maybe the short list of tracks, which is slightly shorter than its old-school genre relatives like Gitaroo Man, Elite Beat Agents or the Ouendan series, there’s hardly anything to criticize. Even then, this digital game has a nice budget price of 29,99€/$ with the option to expand it with a 9,99€/$ Encore DLC. The retail version called the “World Tour” Version comes with both of them already at 39,99€/$ and a few goodies. It offers enough control options for you to find something you can be comfortable with, the gameplay is sound and challenging, and the presentation and characters are distinctively charming. I’m more than happy to give it a Save rating and I hope more people will take a look at it at least.

PS: The game does not have an in-built Tutorial that explains everything. Luckily a mysterious person under the alias TaqFujii has put together a document to help out! Personally, I’d recommend taking a look at it after finishing the story at least once, since it’s really easy anyway, just in case you get into the mood of discovering everything by yourself. Here is the link to the unofficial guide!