Battle Royale and MOBA had a baby, and it’s beautiful.

The Battle Royale virus has not only contaminated most shooters, the plague has now spread to the MOBA genre. Instead of clearing lanes, fantasy heroes with powers on cooldown can now try to gut each other until there is only one champion left! Battlerite Royale will be available on Steam on September 26 with a $19.99/19.99€ price tag.

Rise from the dead

Battlerite was a free-to-play arena brawler in the vein of MOBA games: same sort of gameplay, but leaner in content as it focused heavily on heroes battling each other. Despite the all-around high quality, the game did not exactly take off. The MOBA market seems pretty much saturated with a few heavy hitters such as LOL and DOTA 2. The Battle Royale market is also saturated… for first-person and third-person shooters. But exporting the concept to another genre is actually a great idea from the developers, even though many fans of Battlerite are displeased that Stunlock Studios “jumped on the bandwagon”. Well, the developers need to put food on the plate, and quickly modifying an existing foundation to catch a trend can be extremely rewarding as Fortnite proved. As long as it’s well done, of course… and this new spin-off, Battlerite Royale, is exceedingly well done. 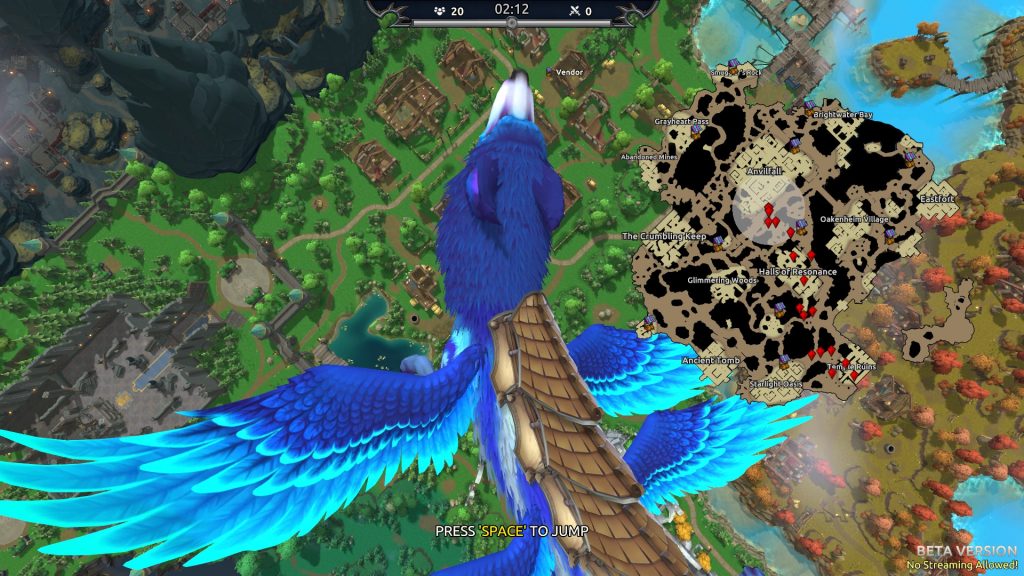 Let’s start with the Battle Royale aspect. Players appear on an island where they have a standard amount of gold to buy their first power upgrade and an item, a first strategic step to take. All champions appear with a basic attack, but the rest of their powers (focused ranged attack, movement escape ability, buff/debuff and so on) has to be bought or looted. After a very long wait, all players ride a gorgeous blue flying wolf that journeys across the map. Players can choose when to jump off, and land on one of the many different biomes of the map. There are all kinds of themes, but the common thread is that there are houses or other rooms that contain orbs. Some types of orbs can be attacked while others require the player to stand still next to them until they are unlocked. They hide items or powers for the hero, and a higher-level version of something will automatically replace the base item in your inventory so the process is very smooth. It’s only a bit annoying when your inventory is full and you see an item on the ground, without dropping something and picking up the new shiny, you won’t know what it does. Fun items include rocket boots and the ability to transform into a barrel or a critter, and also fake orbs. It takes a few real orbs to unlock all the powers and potential of a hero, but after that, the upgraded powers and rare items are an incentive to keep looting the map. The base movement speed is a bit slow, but there are mounts to travel (slightly) faster out of combat situations. Here and there are jumping pads to soar through the air and fast travel somewhere nearby. Pretty cool! It might also be necessary to hurry up when the circle closes in on the map, shepherding players to meet in the center. 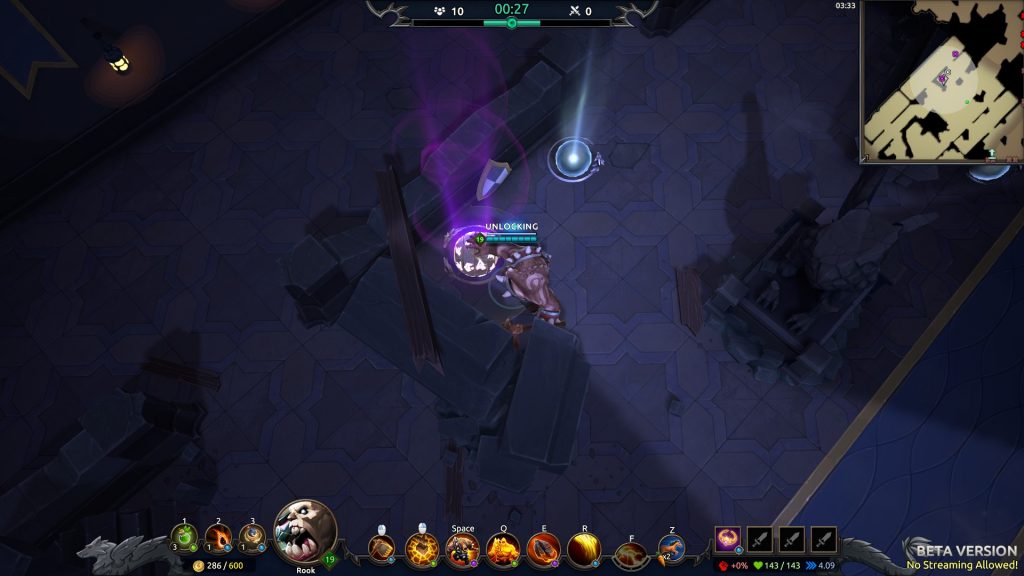 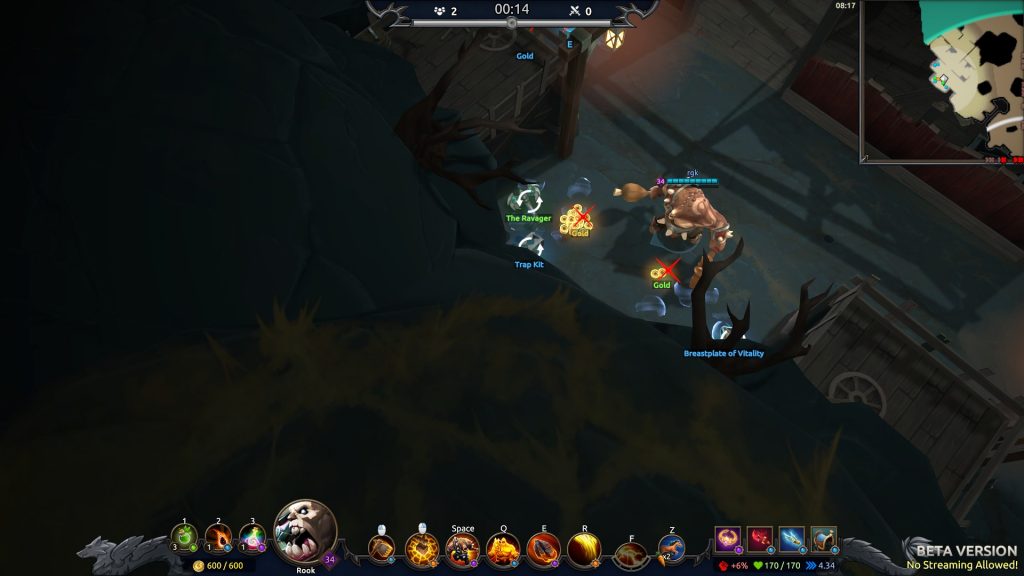 One of the first things that I noticed while playing is that the top-down view is not omniscient, there is a line of sight system to hide what your character can’t see. Your view is blocked off by the walls, giving ample opportunities for setting up an ambush or escaping unnoticed. There are no critters or non-player enemies to fight, so if you hear something nearby, it has to be a player. They might have landed near you, or they are attracted by an air drop, and they won’t necessarily be hostile. While in shooters I have almost never seen people disengage from a fight until one or the other is dead, in Battlerite Royale it was actually fairly common. There are health potions to recover from a fight, but I have seen many biding their time and focusing on looting. And I have seen quite a few beasts slaughtering half the players by themselves (so far, the max player count is 20). 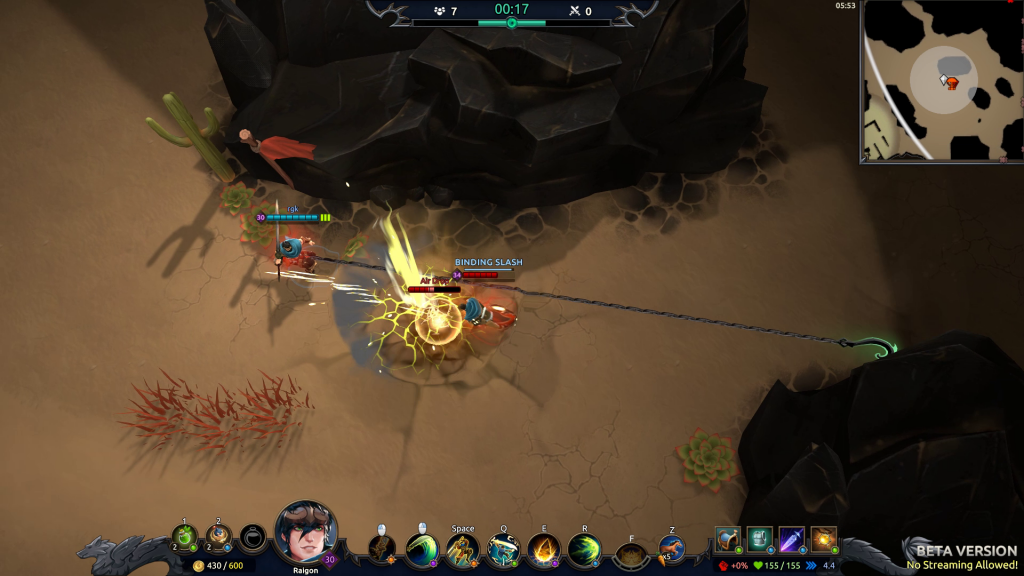 The combat itself is very tactical and plays in the vein of MOBA games. There are splash attacks, dashes, long range shots, stuns and so on. Everything is on a short cooldown as to not be spammed, and if you try to spam or press your keys wildly you will waste your powers. There are no clarity issues, you can easily follow the action even when multiple people are fighting. Things like stuns do not last very long, and since the characters are not massively leveling up their stats to become bullet sponges, the fights are rather fast-paced. It’s not over within a few short seconds, you have time to be tactical, but you can feel the weight of each attack. Likewise, if you do not know your champion’s powers, you will hesitate and stumble as someone swiftly dispatches you. There are 20 different heroes, so there is a huge learning curve ahead and the longevity of this game is probably in the hundreds of hours. 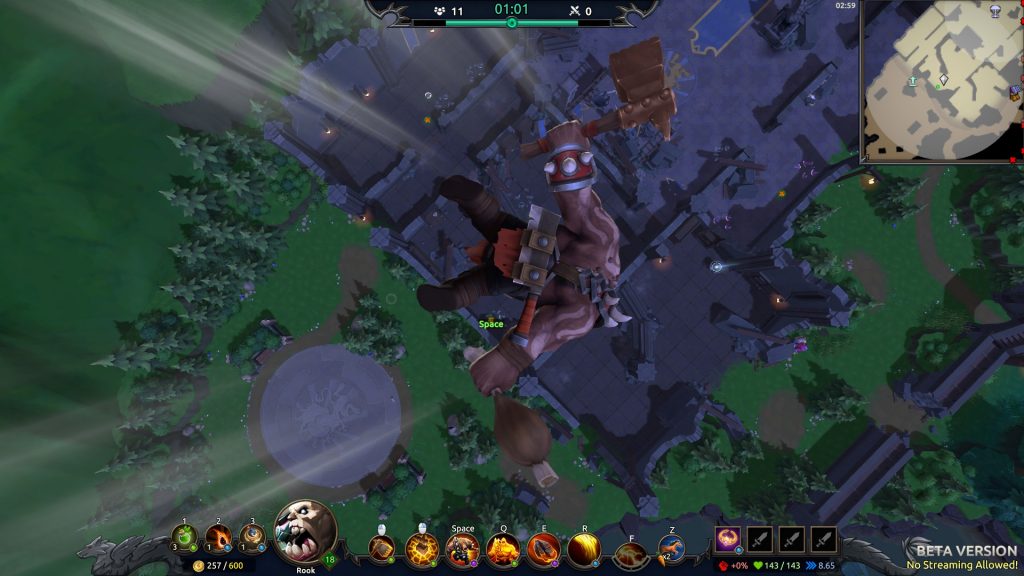 Heroes of the Rite

While I only played in solo, it is possible to form 2-people parties and then the depth of this game increases. There are some heroes who focus on support and thus it opens up many possible strategies. Two melee heroes to overwhelm your foes? Balanced ranged and melee? Two ranged to kite? A melee and a healer? So far, I don’t think I have seen any unbalanced heroes. Whoever kills you always feels OP, but it’s always a different champion that kills you, so overall, I did find the game balanced but my time with the preview was too short to assess that. My only gripe with the champions is that I wish there was a practice mode to learn the powers by killing waves of mobs or something. There is a tutorial to learn the ropes, but then having to learn the specifics of each character during a merciless Battle Royale is a bit too much. 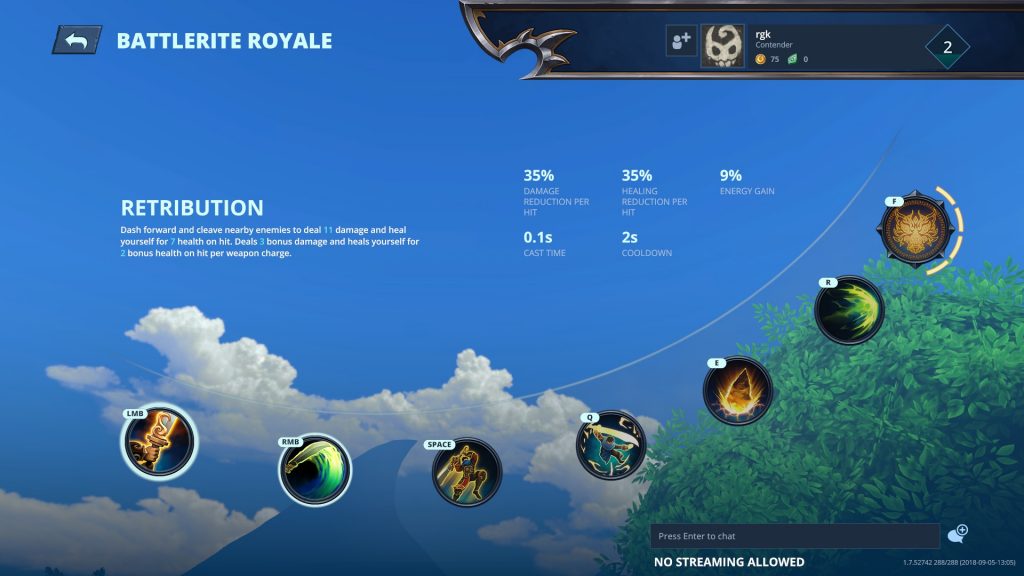 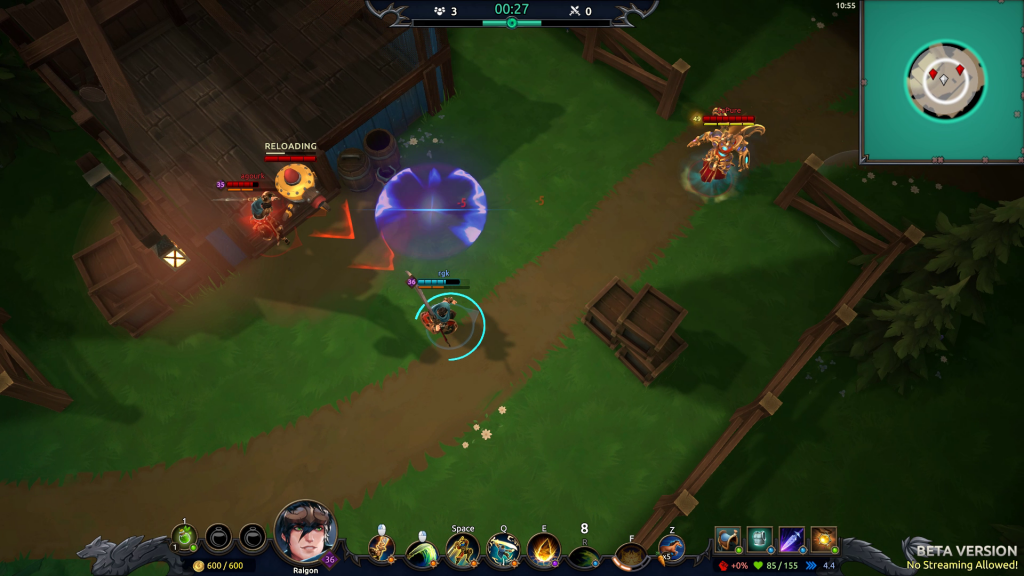 The price of the game ($19.99/19.99€) will certainly put people off in the current market, considering that DOTA 2 and Fortnite are free. We will see whether being a premium game works in Battlerite Royale’s favor or not. Those who owned all heroes of the previous Battlerite game get 50% off the Battle Royale version.

At this point in time during the beta, there is no way to use real currency to buy things in the game, but everything is in place for it to happen at a later date. There are lootboxes containing items such as skins and cosmetics, and within a short amount of time I already managed to find duplicate swords. Everyone hates duplicates. 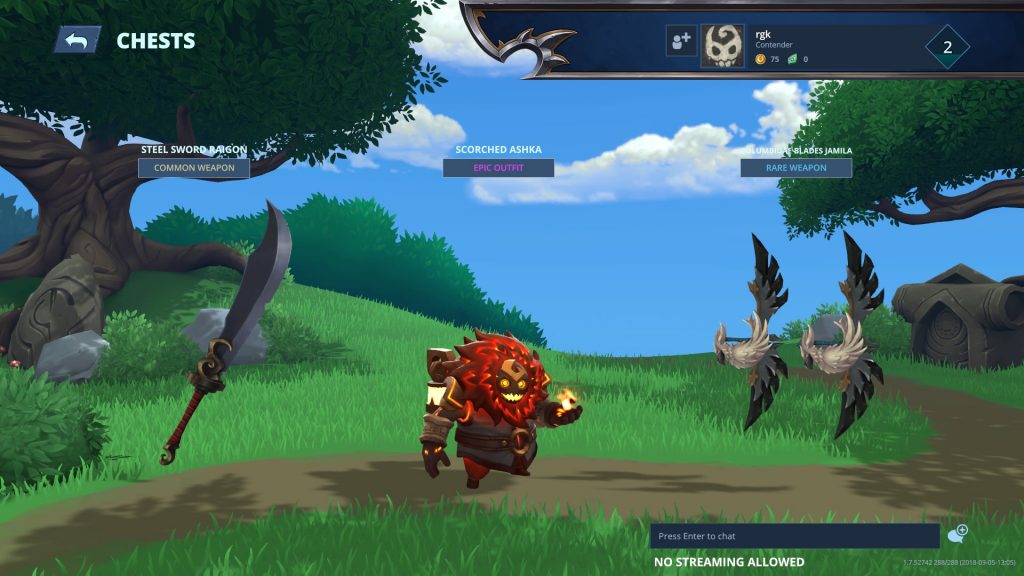 I did not experience any lag. The game runs like a charm and it is very pleasing to the eye. The character designs look great and can satisfy many different tastes. The options menu has everything you can dream of, from graphical settings to detailed gameplay mechanics such as whether you want to cancel your attack by pressing a dedicated key or by simply moving your character. 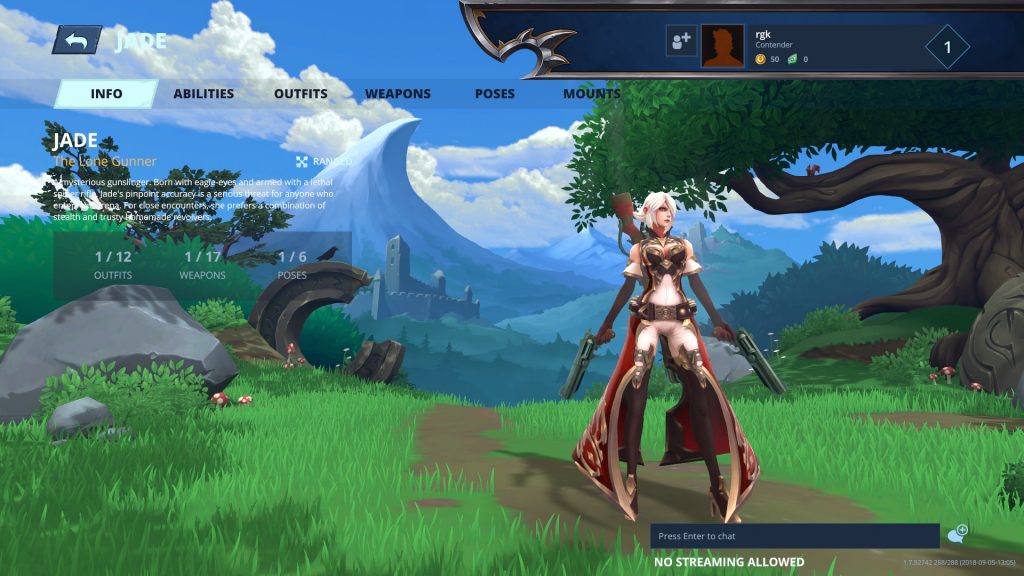 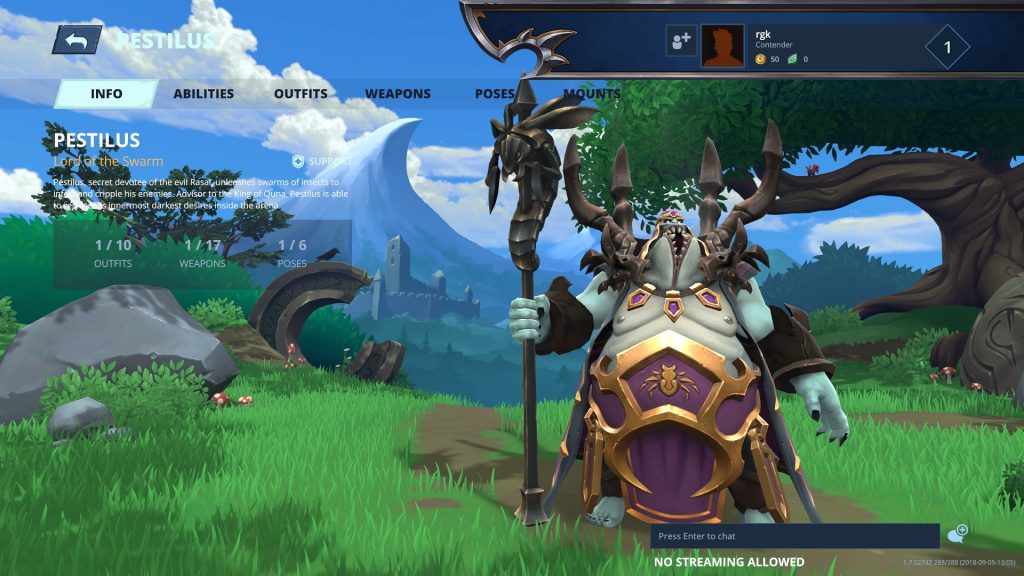 Battlerite Royale has all the makings of a great game: technically perfect, well-tuned gameplay mechanics, gorgeous art, and it is the first game to explore the intersection between the Battle Royale genre and the MOBA genre. Both aspects are finely tuned to match together, and if someone told me that this is a Blizzard game I would have believed them. Now all that remains to be seen is whether the audience has an appetite for such a crossover, while factoring the price of entry. As for me, I only regret that there was no PvE: the tutorial used enemy mobs for target practice, but they were nowhere to be found during the actual game. The saturated FPS Battle Royale genre has started to evolve towards adding enemies from the environment, such as wolves in Fear the Wolves and sharks in Last Tide, so I would have been interested to see more of that in Battlerite Royale as well.