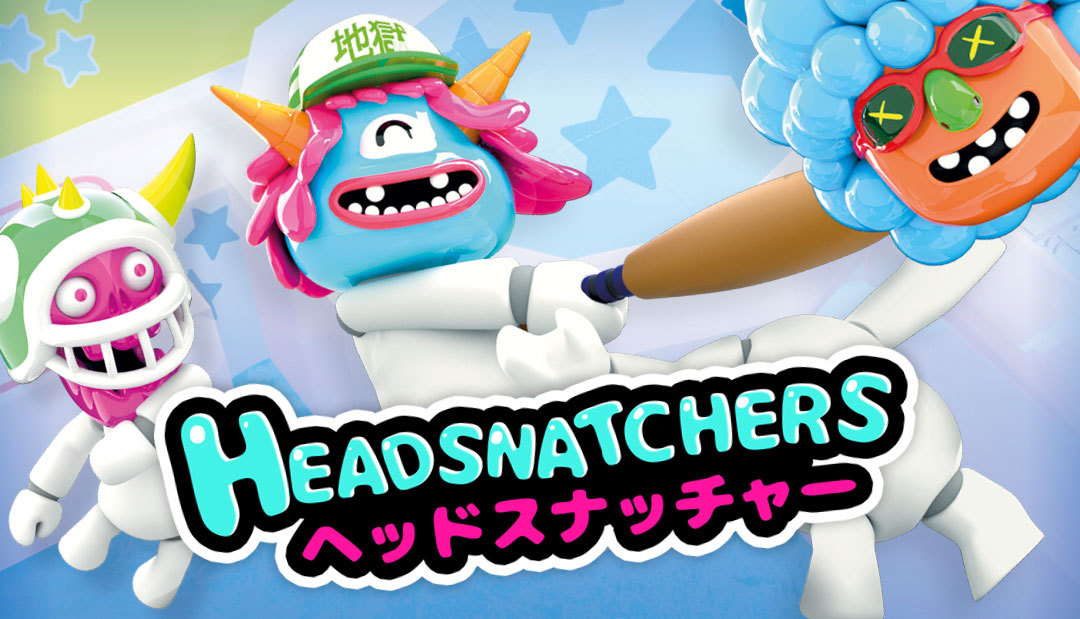 Don’t lose your head or your friends will take it!

Headsnatchers is a local and online multiplayer game for up to 4 people. In this party game, everything is based on snatching other people’s heads, as the title suggests. The game is still in early access, but it already shows great promise, and I will attempt to explain what works and what doesn’t.

Most of the time, when I try new party games, I field test them during a party. It’s a very violent baptism by fire as there are many games available and my friends have very little patience for games that are not instantly pulling us in. I tend to think that party games should be pick up and play, and their game mechanics should be self-explanatory. There are several ways to often remind them to the players, whether with a controller overlay describing the buttons (Overcooked) or with a tutorial during or after the lobby (King of the Couch: Zoovival, Dad Beats Dad, Blade Ballet). There is no such thing yet in Headsnatchers (just a quick view of keyboard buttons), and we started out in a purple level trying to figure out the buttons on our gamepads while being constantly knocked out by the frequent assaults of tentacles. No one understood what was going on and my friends instantly urged me to switch to another game and end their suffering. This revealed issues with Headsnatchers that absolutely need to be addressed, and I will come back to that later. 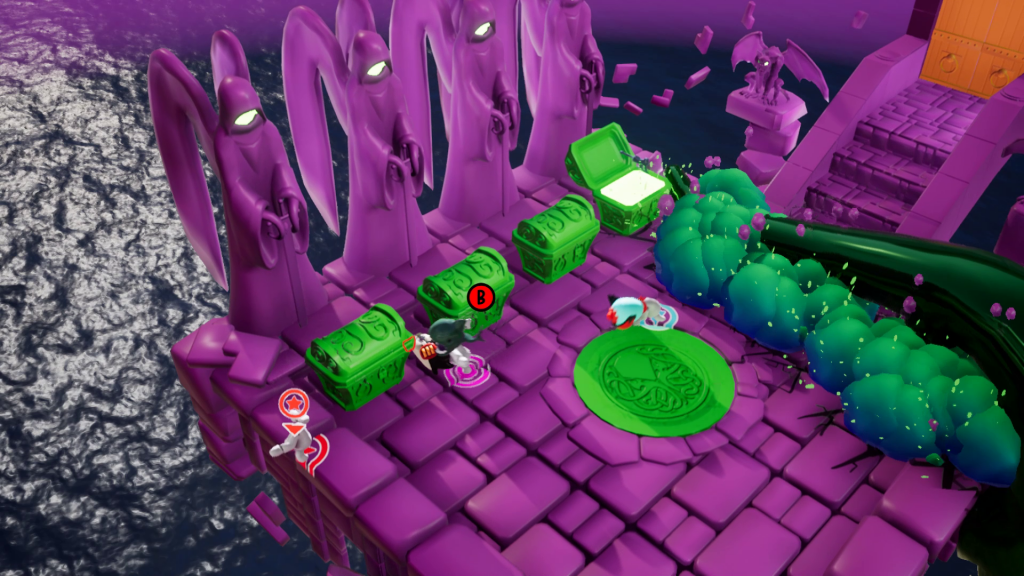 Disappointed by this first experience, I decided that if I wanted to give this game a better chance it needed to be done online with fellow seasoned reviewers JimDeadlock and RipWitch (see video). And this time things took a completely different turn: even though online mode does not yet feature all the maps, we loved the experience and had a few good laughs. We are totally planning to play this game again later during the development cycle! (Probably at release). One of my favorite moments was when I threw Jim’s head down the toilets, and he attempted to flush me but flushed his own head. 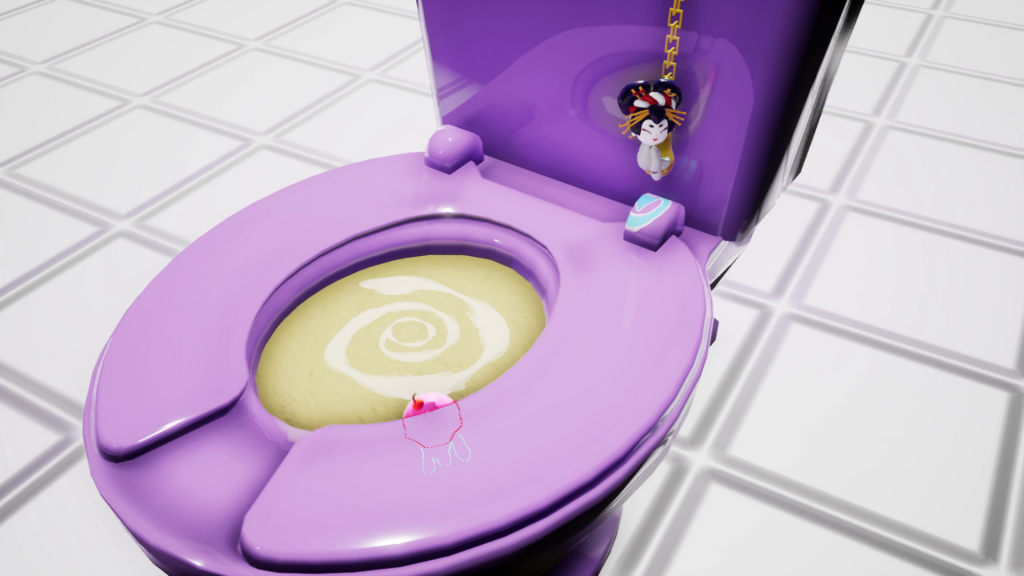 Now that I hopefully grabbed your attention, I will now explain how Headnsatchers is played and why we had such a contrasting experience with my local tentative.

As I mentioned in the introduction, the aim of the game is to catch your opponent’s head. We see our little fighters from up above the 3D arena, and our dolls can jump (button A on an X-input controller), dodge roll (LB), dash (X), punch (Y), grab a head (B), throw the head according to level specifications (RB). There is already a problem here, as the animations for dodge roll and dash look very similar. At first, I did not understand why my constant attacking left my enemies unharmed while their attacks knocked me out. We never really understood the punch (Y) either, it seems to be designed only to work with weapons that can be picked up. Too many buttons to guess without a tutorial. I look forward to seeing one at least during the lobby in the final release. This creates another problem, as the sequence of events (grabbing a head and then doing something with it) is much too complicated for non-gamers (with weak motor skills in games). Local multiplayer games are an entry point to socialize with family members, friends, or partners, who are usually not that much into games, and they will get completely wrecked in Headsnatchers. Keep this game to play between gamers, it is clearly not accessible enough for the casual audience. 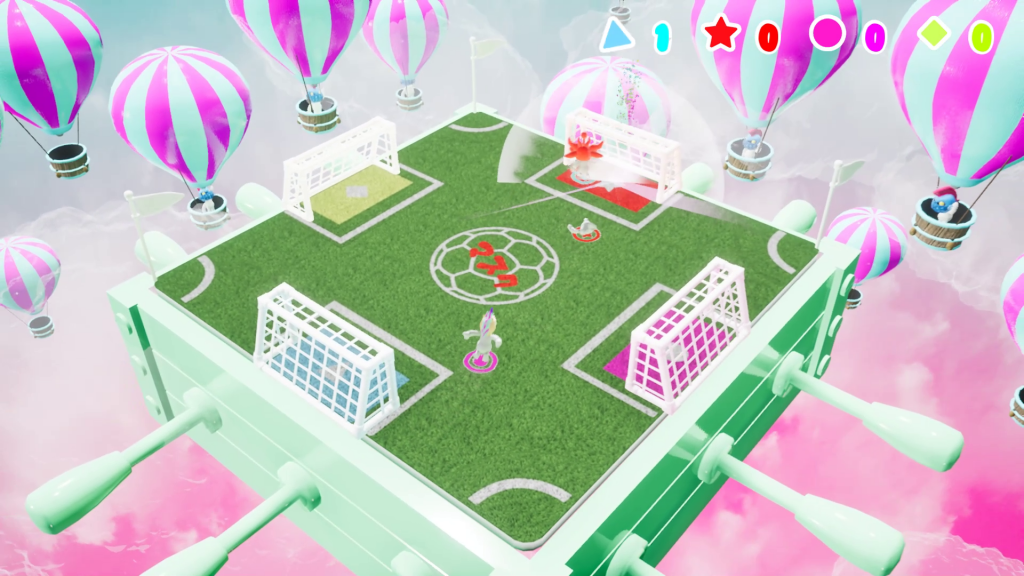 So, once you got a head, what do you do with it? You score it in hoops, you throw it in a goal, you knock over pins at the end of a bowling alley, you throw it in the toilet and flush it. These ways to kill someone are level sensitive. This is not a typical brawling game with health points, it’s about managing to fulfill a level’s requirements with enemy heads while keeping your own head safe. This makes all the difference as it makes Headsnatchers so much fun and a blast to play during long sessions, but it is also the reason why we initially bounced off the game so hard. The first level that we played (purple one with tentacles) consisted of bringing a head to the center of the level to call for a sacrifice, then a portal door briefly opens to throw heads there and achieve a kill. This sequence of events was hard to guess as we were constantly pummelled by the tentacles without knowing why none of us could die. To the developers, I suggest this: make sure this map is not in the first position anymore, instead go for the football/soccer one so that people can learn the rope in an easier environment. 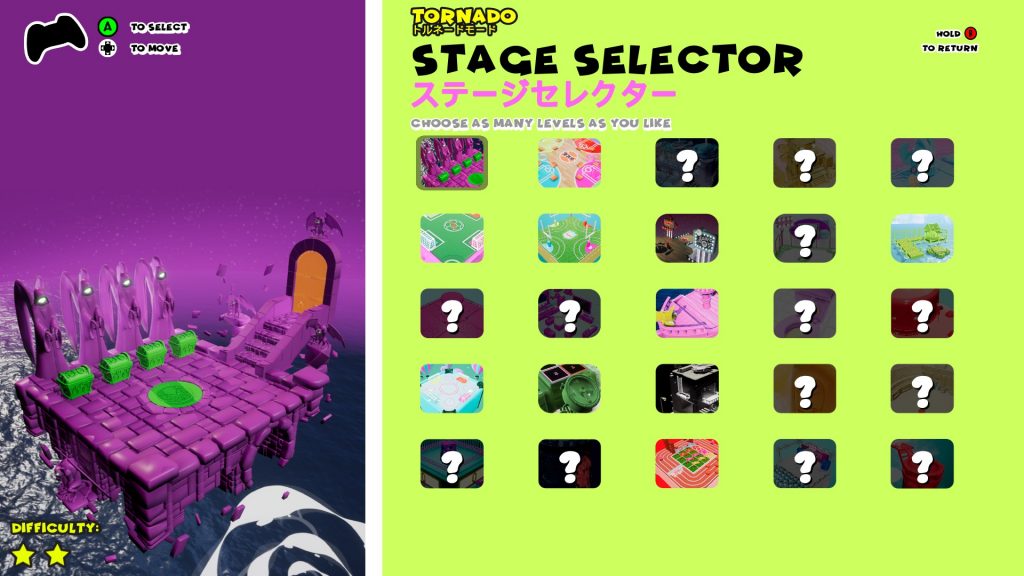 Don’t get a big head

Snatching a head is not as easy as it seems. First, you have to knock someone out, and since they keep jumping and dashing around, a lot of mind games comes into play, which is fitting for a game about using heads. Once someone is knocked out, there are a few seconds of vulnerability to grab their head and get a head start on them, that is because they will quickly come after you to get their head back. This is another one of my complaints, as headless peeps are all white and sometimes I was running the opposite way that I should have because I wasn’t sure anymore which character I was. There are color markers on the ground, but it would have been easier to have a color for the doll itself. Anyway, not a big deal, where was I? Oh yes, once you have someone’s head, you have to use the level’s way to kill it. There is a nice objective marker that appears to tell you where to go, and then you have to aim. Aiming from this perspective is difficult and it’s even worse when someone is after you, so it’s easy to miss and have the cards turn on you. Interestingly enough, it’s possible to be headless, snatch your opponent’s head and kill them before they have enough time to kill you. 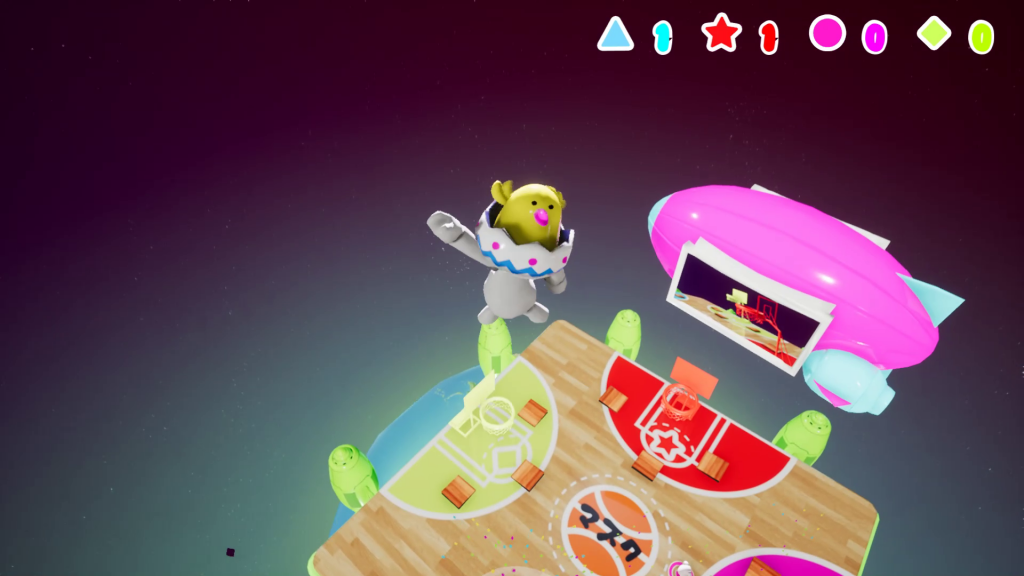 There are many many ways that an encounter can play out, and this differentiates Headsnatchers from other, more straightforward fighting games. On top of that, each map adds its own spin to the formula, thus adding variety. Some maps have a quick and easy way to score (like the one where you just drop a head in the water for a shark to eat it), some are much more complicated (the purple summoning one, or the boxing ring that requires to immobilize a head for 3 seconds – 1 second more than it takes your opponent to get back up and dash you). Consequently, the pacing is different from one level to the other, the action is different, the strategies are different – one single game feels like many and it’s hard to get bored. 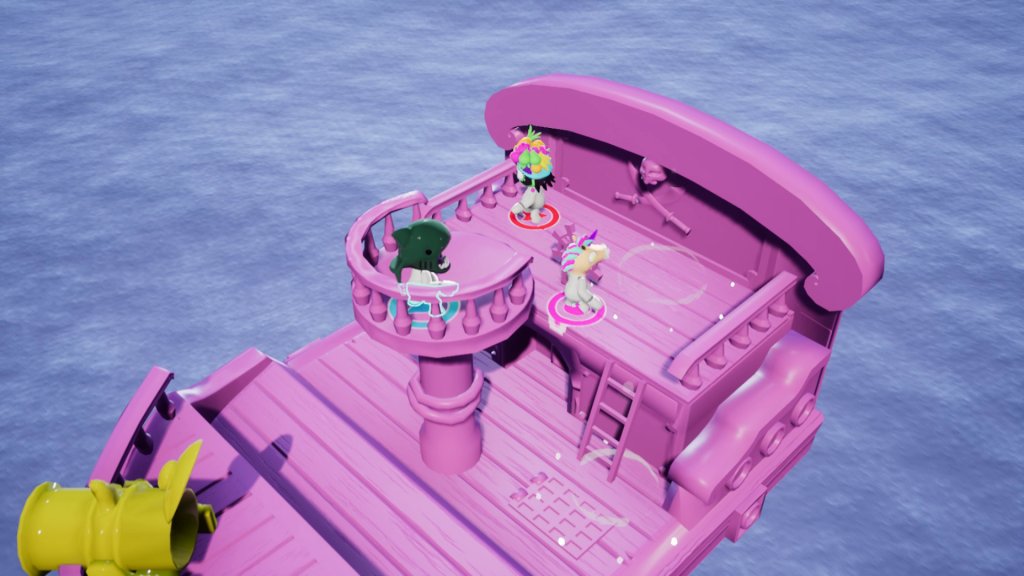 There is a single-player mode about platforming amidst a Zombie-infested castle, and I can’t say that I had a good time with it. This perspective makes it hard to estimate the right distance and angle for a jump, and while the lengthy combats are fun in multiplayer, it’s a chore against Zombies. I’m sure a few people will enjoy taking on this challenge, but I don’t feel like this counts as a reason to get this game. 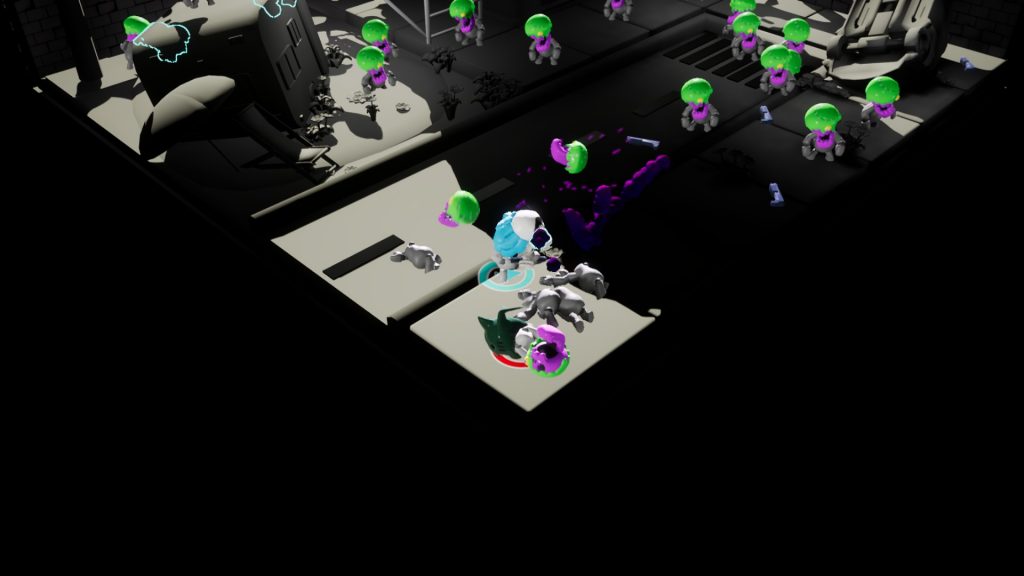 Overall, the graphics are pretty cute, everything looks like little toys in a playset. The colors can be surprising (so much pink and purple), but it can fit with the plastic set that was not painted over. There are many, many, many, awesome heads to pick from, and it is also possible to customize your own head, but I fear that the result may not be as good as the original ones. New heads and levels can be unlocked, albeit at a much too slow a pace (and it’s generally a bad idea to gate levels in local multi-player games). It looks like the controls will be customizable later, but it is certainly not the case now. I only had one crash, in the “Roulette” game. Otherwise, the game runs well and we did not experience any lag (but not all maps can be played online yet). 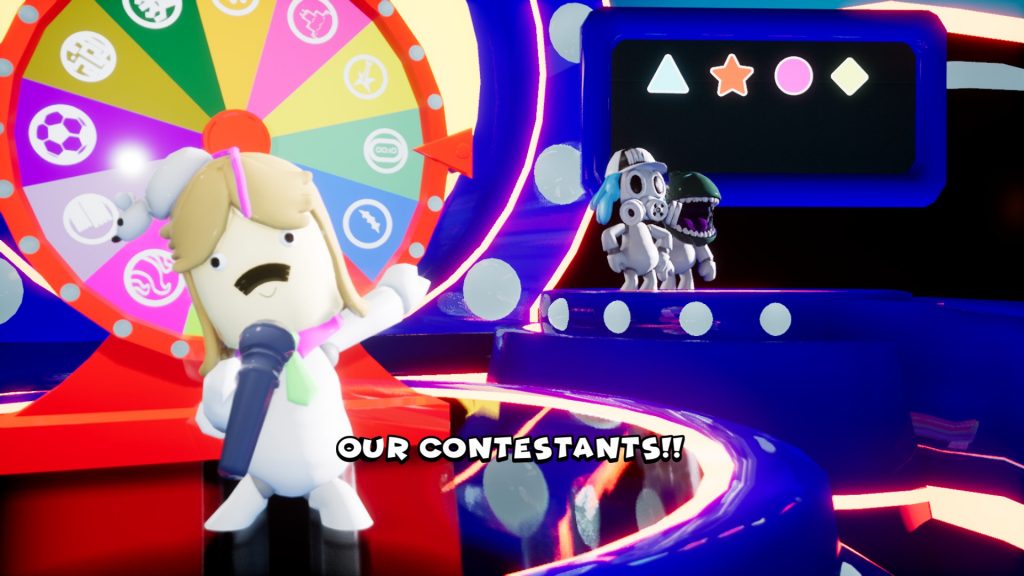 Headsnatchers has a bit of a learning curve and its complicated sequences of action make it unsuitable for the most casual fringe of the audience. However, it is definitely worth your attention if you plan to play it with other gamers, as the fighting mechanics are unique and, combined with the variety of the levels, it is constantly fun and challenging. Despite a rough first experience, this is shaping up to be one of the best party games, we laughed a lot and we are looking forward to seeing the game once it’s finished.