REVIEW: A Light in the Dark
Add comment
Share:TwitterFacebookRedditPinterestWhatsAppEmail 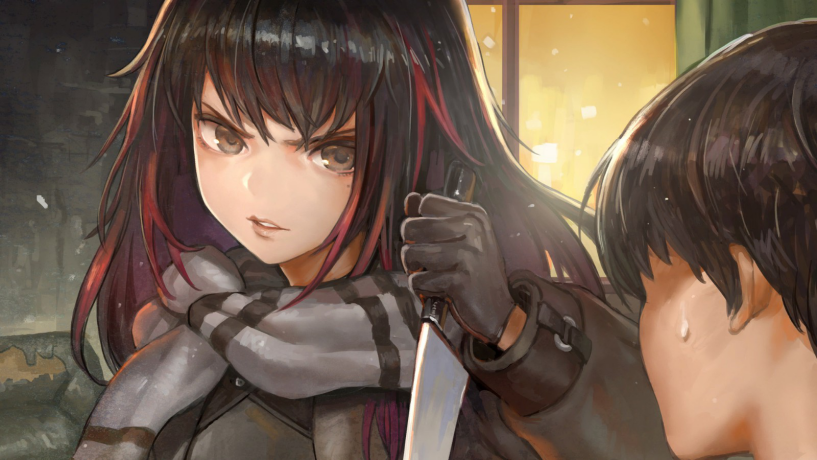 REVIEW: A Light in the Dark

Why, oh why, did I turn down that dark alley. It’s a faster route home, but no one else travels through for it to be safe.

Despite how safe the world might be, it is still cruel and unfair. Many people are in situations where they are barely surviving, while others are better off. Some are fighting to get out of loans that they will never get out of unless they suddenly happen upon a large sum of money. Even if you’re secure financially, you or your family can die by something you could have never foretold. Worse yet, you can get kidnapped, and your life would be in the hands of your kidnapper, never to see those you know or love while they desperately try to find you. 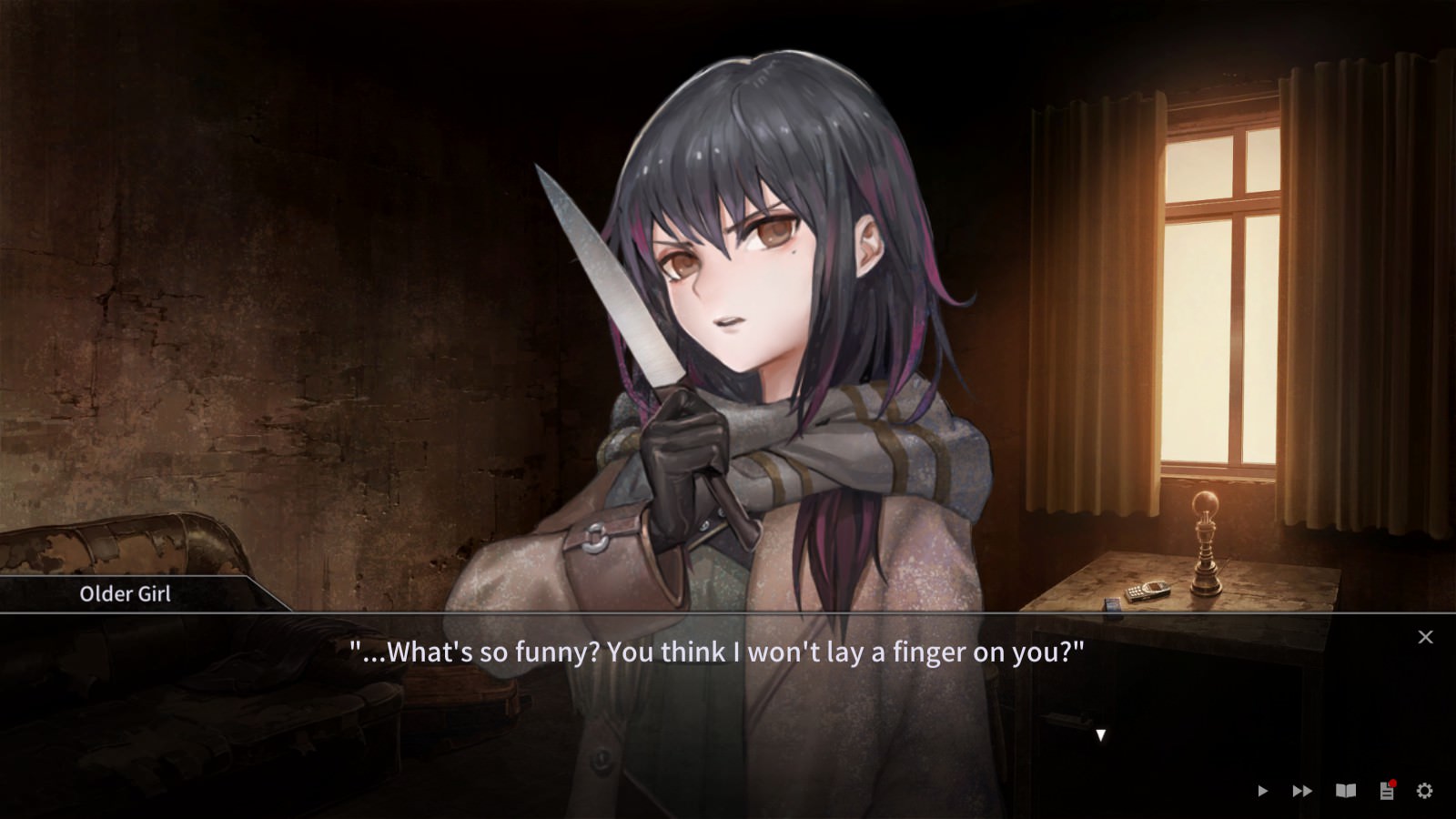 The Light in the Dark jumps right in as we take the role of Hao-Chen waking up to an old and unkempt apartment staring at him and rope biting into his skin. The last thing he remembers is getting out of cram school and heading towards home before he became unconscious. It’s obvious that he was kidnapped, but why? Before his mind can think the worst, his kidnapper comes into view, a mysterious girl who is only looking to use him for ransom. Hao-Chen was targeted due to the fact of him living alone, having a set schedule that he always went by, and having a rich father. Later on, a little girl who seems to be in on it as well shows up to watch him when the mysterious girl isn’t home, but don’t think she’ll be easy to escape from. Both of your kidnappers possess a knife just in case you have any smart ideas. Hao-Chen won’t be leaving till they get the ransom money. 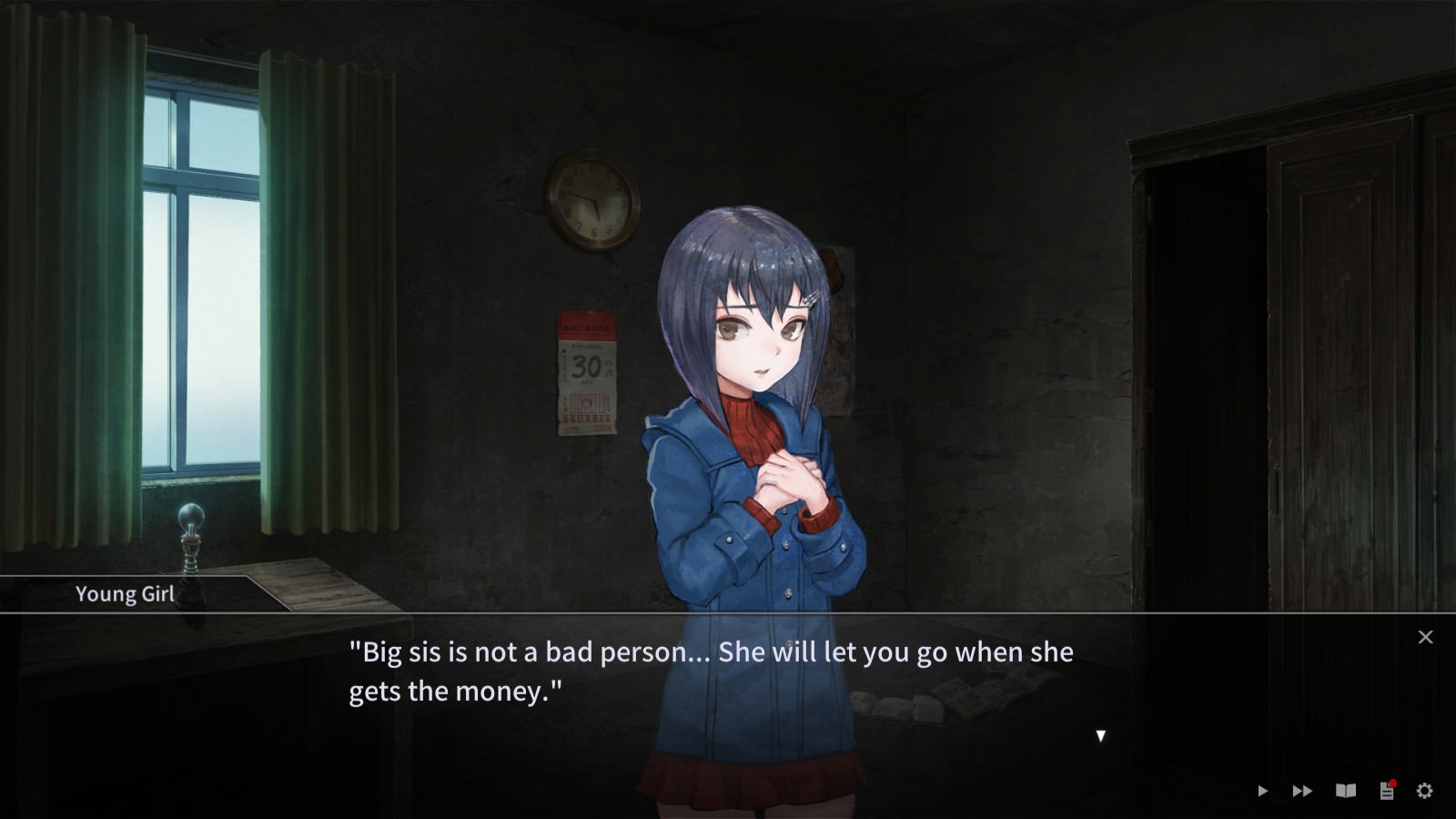 As you wait for the days to pass, you have several actions that you can take. You can choose to talk to your kidnapper, which will take you to a couple of topics where you can start a conversation on. This can get you more information about your situation, so try to connect with them so there can be some hope of you escaping, or to make them question their actions. Curious about the stuff around you? You can choose to observe your surroundings and know what items are around you. Some items are there to give you an idea about how the kidnappers live, but others will start up conversations with your kidnapper. If that doesn’t sound appealing, you can simply rest to regain some of your stamina, which depletes if you get wounded, and you can even die if it reaches zero. Whenever you get this downtime, you only have a few actions you can take, so choose smartly.

In addition to choosing topics you can bring up, during conversations you have dialogue or action options throughout the story. However, these have timers that vary in length to bring home how tense this situation is. You can’t think forever about what you should say or do as a kidnapper won’t wait, or even make brash decisions without thinking in terms of the timer running out. Do you want to choose dialogue that is nice or one that attacks or sasses them? Either way, your kidnapper will react according to their beliefs and personality, bringing you closer to them or making them hate you even more. 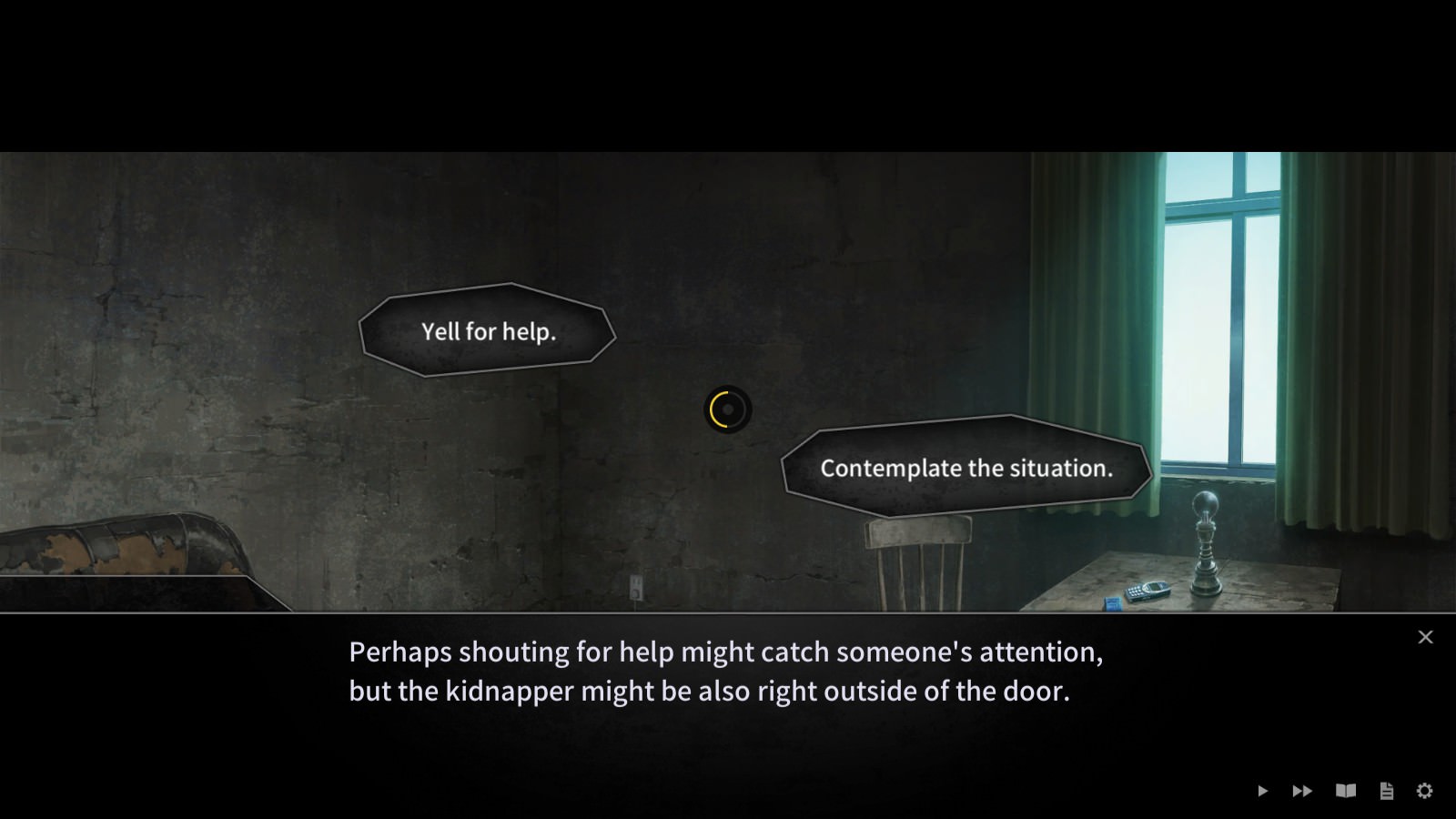 I really enjoy that both Hao-Chen and his kidnappers are both likable and understandable in the situation they were put in. It would have been really easy to write one of them into an unredeemable character where you just root for one side. Hao-Chen could have been written as a horrible, spoiled rich kid or the kidnappers could have just been doing it for fun or just because they hate those who are way better off than them, but no. Sure, the kidnappers do buy into the rich stereotype shown on TV and believe rich families don’t do anything for themselves, but their situation that is seemingly inescapable without a miracle is reasonable. They are barely staying alive as mostly everyone looks down on them and refuses to help. It’s a situation that anyone could have resorted to if they were the mysterious girl. Hao-Chen is someone who, despite how idyllic the kidnappers saw being rich was, doesn’t have a family he is close with and leans more towards living sensibly, far from the spoiled kid that was expected from him. 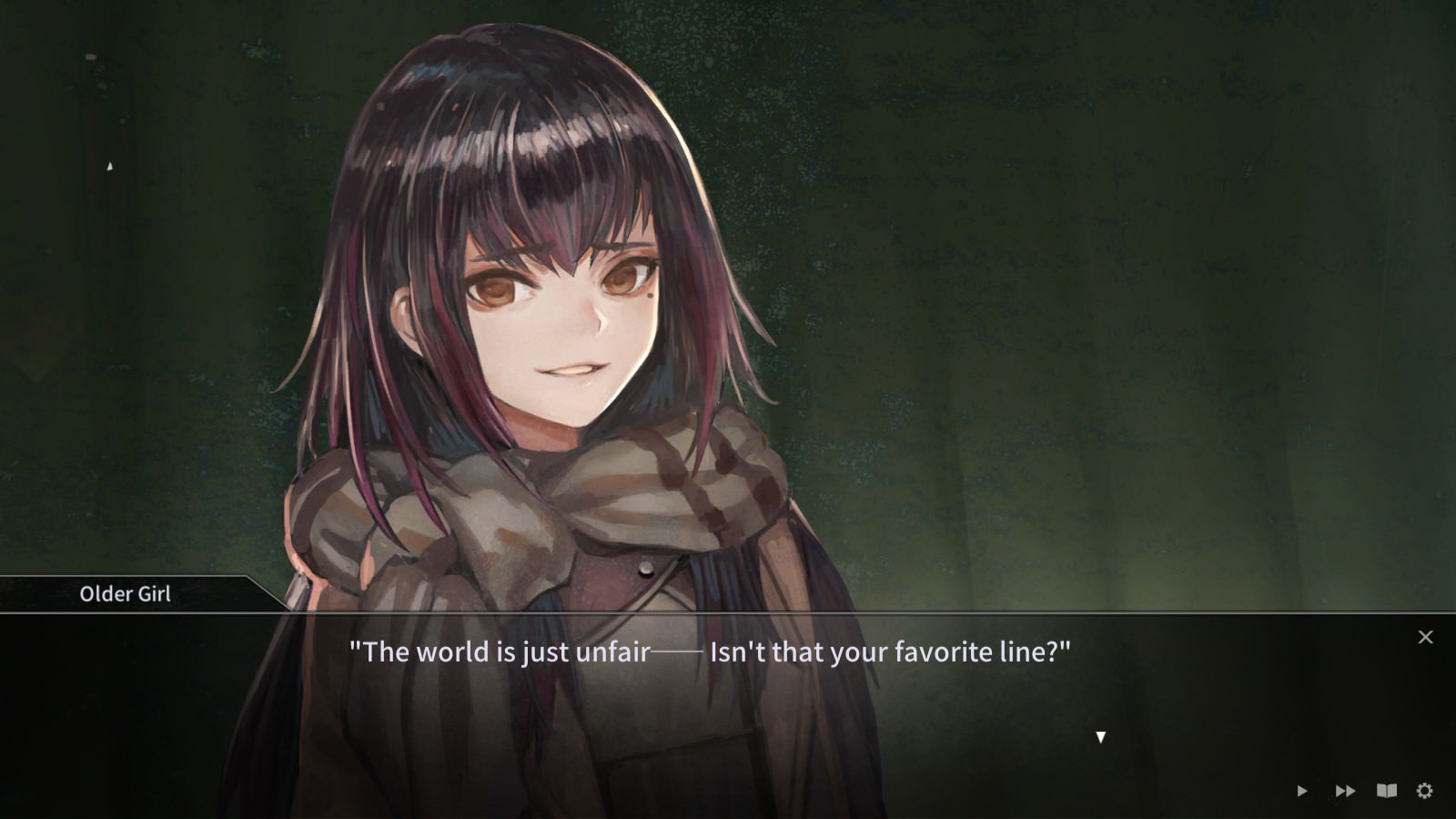 Like with a lot other visual novels, I recommend going for the other endings and replaying to see what different choices you get. Information that was kept in the dark comes into the light and you get to see what happens to the characters where the one you will most likely get is mostly up in the air.

The artwork is beautiful, clearly bringing out what the characters are feeling, and the music is pleasing and fits within the situation Hao-Chen is in. The English translation is well done as well and I didn’t notice any mistakes or got confused over a sentence being worded weirdly.

A Light in the Dark also got a short prologue manga recently that shows what was happening before Hao-Chen was kidnapped. I honestly find it a tad overpriced since it is short and you won’t find anything new except for one event and a few details that were left up in the air. I wish there was more to be seen about their backstories. If you want to support the developers more, this is a good way to do so, but if you’re looking for more content, you’ll be disappointed.

A Light in the Dark is a very well written visual novel that puts you in the shoes of someone that was kidnapped, while having to choose your words and guess how your kidnappers may react on the fly. The only thing it has against it is its short length, but if the writers thought it could have been better if made longer, I believe that they would have it so. After all, it’s best to not have a story drag on. I can see others not liking how there is no happy ending, only slightly better endings, but it would have been out of place in this type of story.

If you’re looking for another visual novel to dive into, consider picking this up.