Goblins of Elderstone is an Early Access city-building game focused on a small tribe of cute little goblins. Awwww.

Have you ever fancied taking eight goblins and some basic resources, selecting a patch of procedurally generated land on which to build, and starting your own goblin tribe?

Goblins of Elderstone gives you this opportunity. Customise your tribe and their history, then set out with only an ever-burning campfire and a cartful of resources to make your mark on the world!

Hmmm. Do goblins mark their territory? I’m not sure.

Goblins of Elderstone looks pretty, with a colourful large-poly style. The game is played in full 3D with a reasonably well-behaving free-floating 3D camera. You can pan in three dimensions and rotate about two and it mostly works well, though the terrain and buildings do sometimes force the camera somewhere not quite where you want it. Models are mostly made up of smallish numbers of large polygons, with relatively clean and simple textures. They look cartoonish and really rather nice.

The goblins themselves are cute little buggers — even the skeletal ones! — but there’s very little variation between them. Each job role has a custom skin, some of which are wonderfully creative, but within each job there only seem to be a couple of variations. Though not essential, it would definitely add personality to the game if there were more changes in the basic appearance: different builds, faces, accessories, etc. As it is I didn’t grow even remotely attached to any of the goblins, since they were so interchangeable. 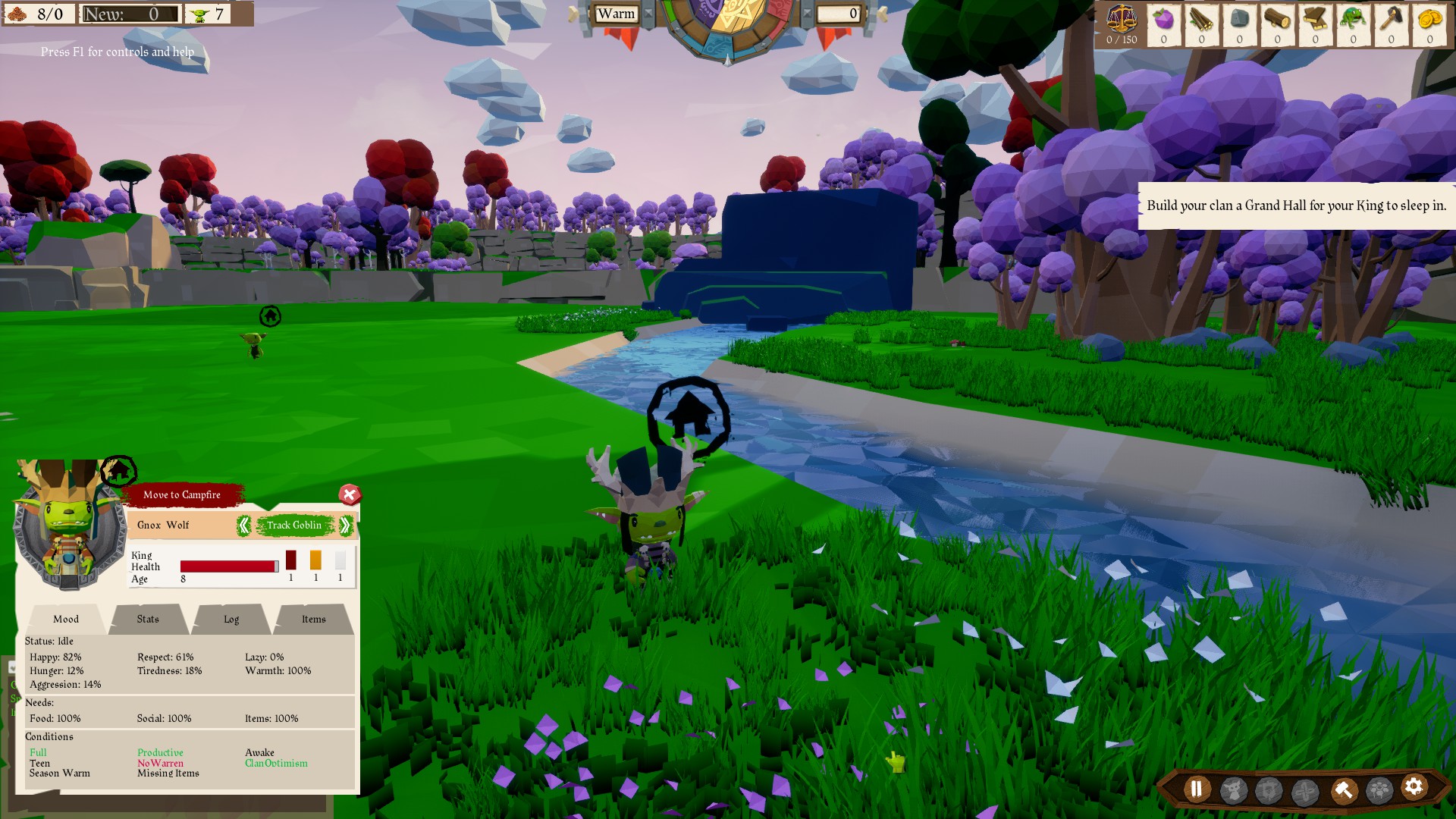 Buildings are more detailed than they appear at first glance: zooming in shows some interesting details. Many buildings differ from the others in size, shape, and details, with otherwise similar-looking buildings differentiated by the signs attached, such as the large hand tool on the top of the Crafting Hut. They all have a sort of tribal goblin feel to them, which is great.

The game world is fairly small and, I think, procedurally generated. It’s always in a small valley with the walls making impassable barriers, though future development is planned to include a world map and some way of travelling outside of the goblins’ little piece of the world. The day/night cycle looks really good, with changing shadows and lighting. Seasonal changes are much more obvious, with different terrain textures and foliage. 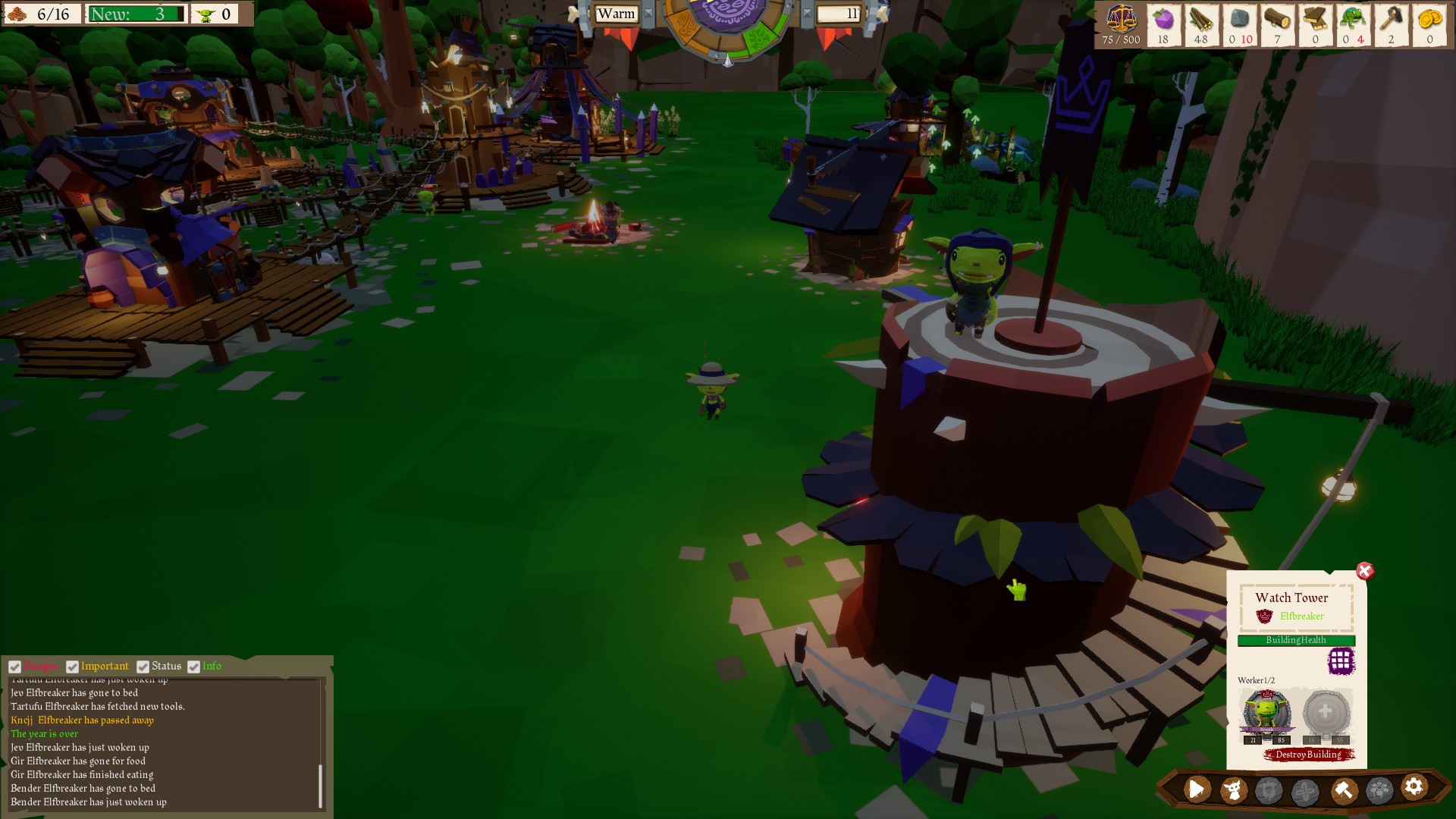 The interface is mostly intuitive and easy to use, but sometimes button clicks don’t work: the sound plays and the button highlights as if it’s been clicked, but it doesn’t actually do anything. This happens most often with the time controls, which can be critical. It’s also annoying that they auto-hide; time controls should be front and centre in a city builder. Tooltips are well used, but there are a number of “coming soon” type comments in the UI, as well as a few grammatical errors.

Sound effects are very limited and rather quiet, the only one that’s easily heard being the click when you (sometimes unsuccessfully) click on UI components. I think there are only two music tracks: a sort-of minimalist acoustic guitar and percussion track, which sounds very cool and relaxing, and another less interesting tune. Much of the game is played in silence. There are some ever-so-slightly amateurish voices for the goblins, who say what I assume are words in is a made-up language. They’re pretty good, but they’re all the same with very little variation. Differences in pitch or tone, and a few more different responses, would go far. 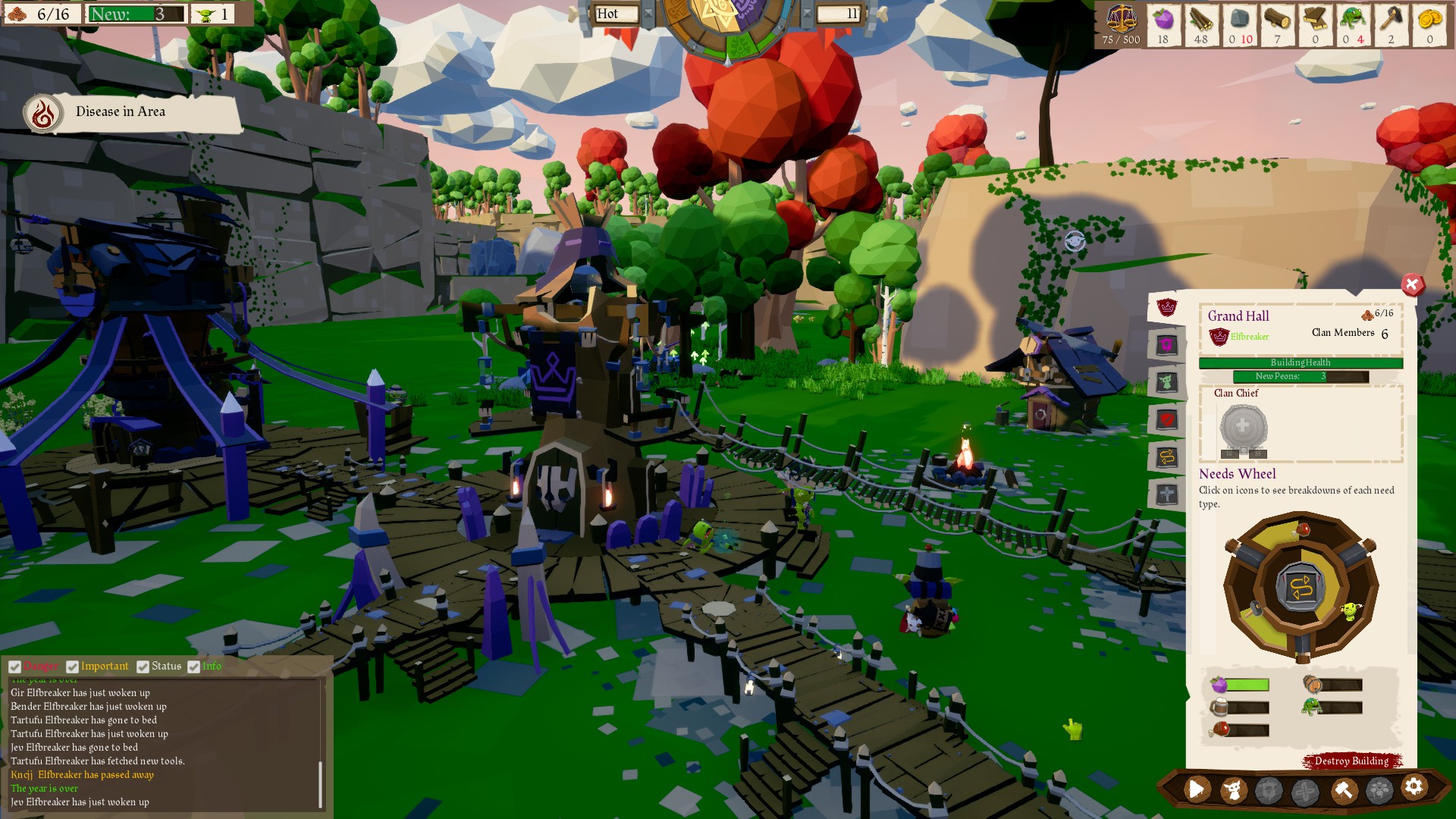 If you’ve played any recent city-builders then you’ll be familiar with the basic gameplay in Goblins of Elderstone. You choose a starting location for your camp and then build various buildings around it, gradually expanding with living space, resource harvesting, and crafting buildings, while trying to grow your population.

The game adds to the basic formula with an interesting seasonal mechanic: each day/night cycle represents a goblin year, and advances the seasonal calendar: Summer and Winter are each two years in length, while Autumn and Spring are one. During Summer and Winter the temperatures can reach extremes of hot and cold, with a chance to kill your goblins, and in Winter any graveyards in the area may also spawn goblin skeletons who make a dangerous beeline for your village. During Spring your population may increase with new babies, who are grown into adulthood just in time for the following Winter. 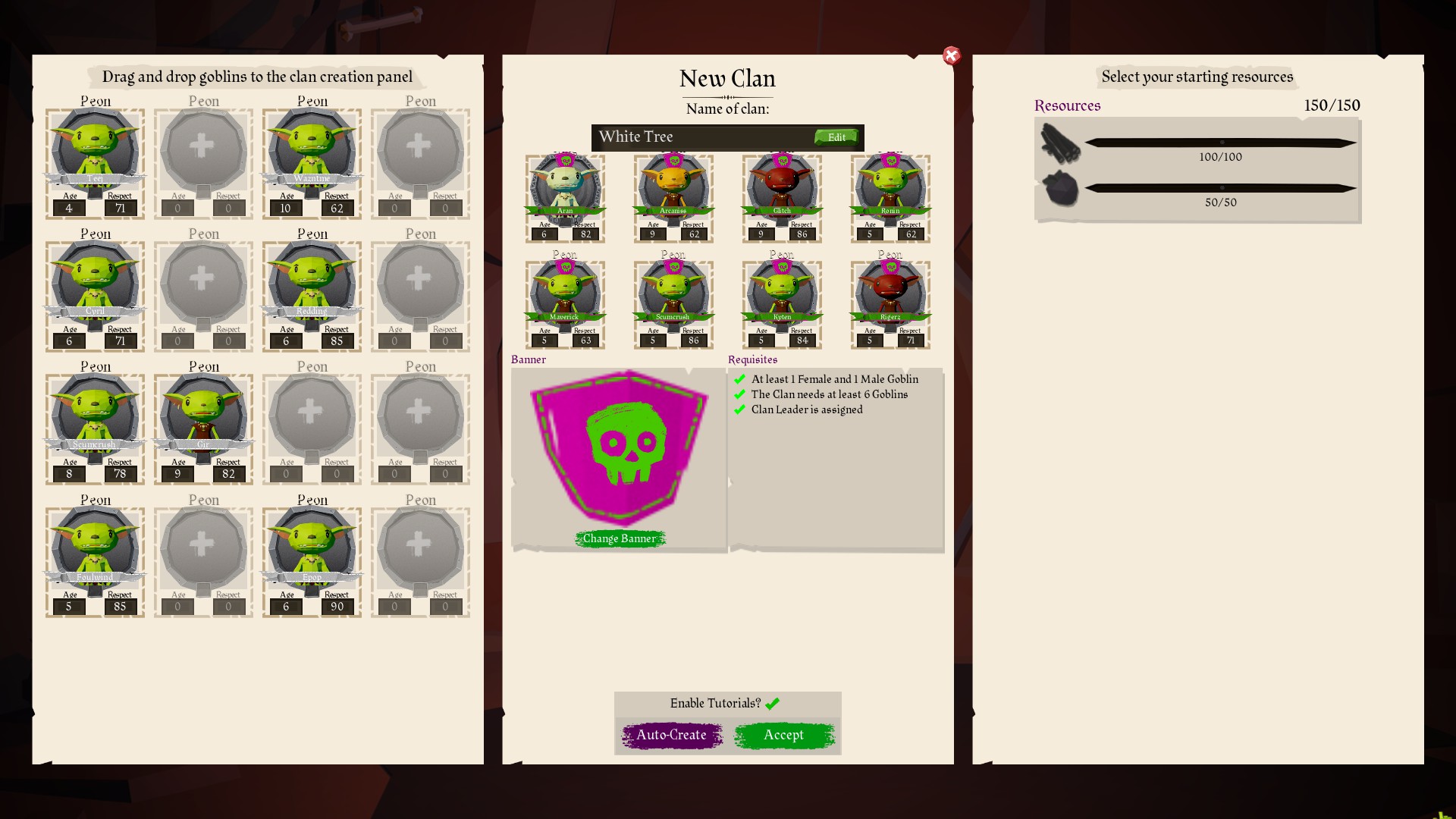 Breeding requires both male and female goblins; lose all of one sex and it’s a slow march to genetic oblivion for your tribe. You select your starting tribe of eight goblins from the available pool as part of the game-creation procedure, usually based on age and sex. Game creation can be done in three ways, but the most interesting is the story mode, which presents you with a story allowing you to choose your tribe’s alignment, path, magic, and enemy from four situations in their racial history. The story is written with terrible grammar and tone as if it were from a goblin myth; it’s rather cleverly done. 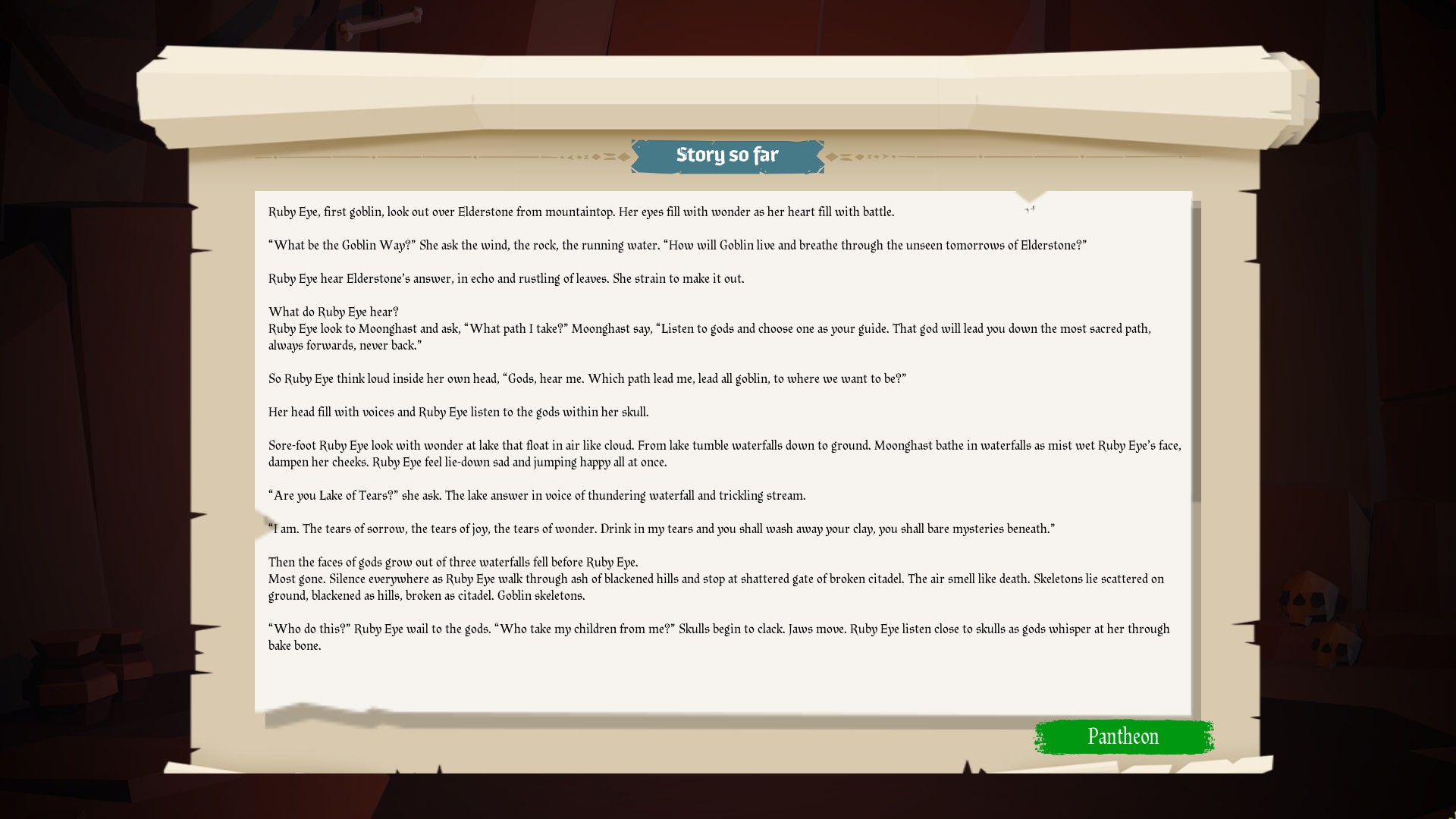 You then choose your gods (which only have minor influence on the game — the rest is a work in progress) and starting location on the procedurally generated map of the world. At the moment there’s no travel elsewhere — another work in progress — so make sure you like the look of the place you pick. 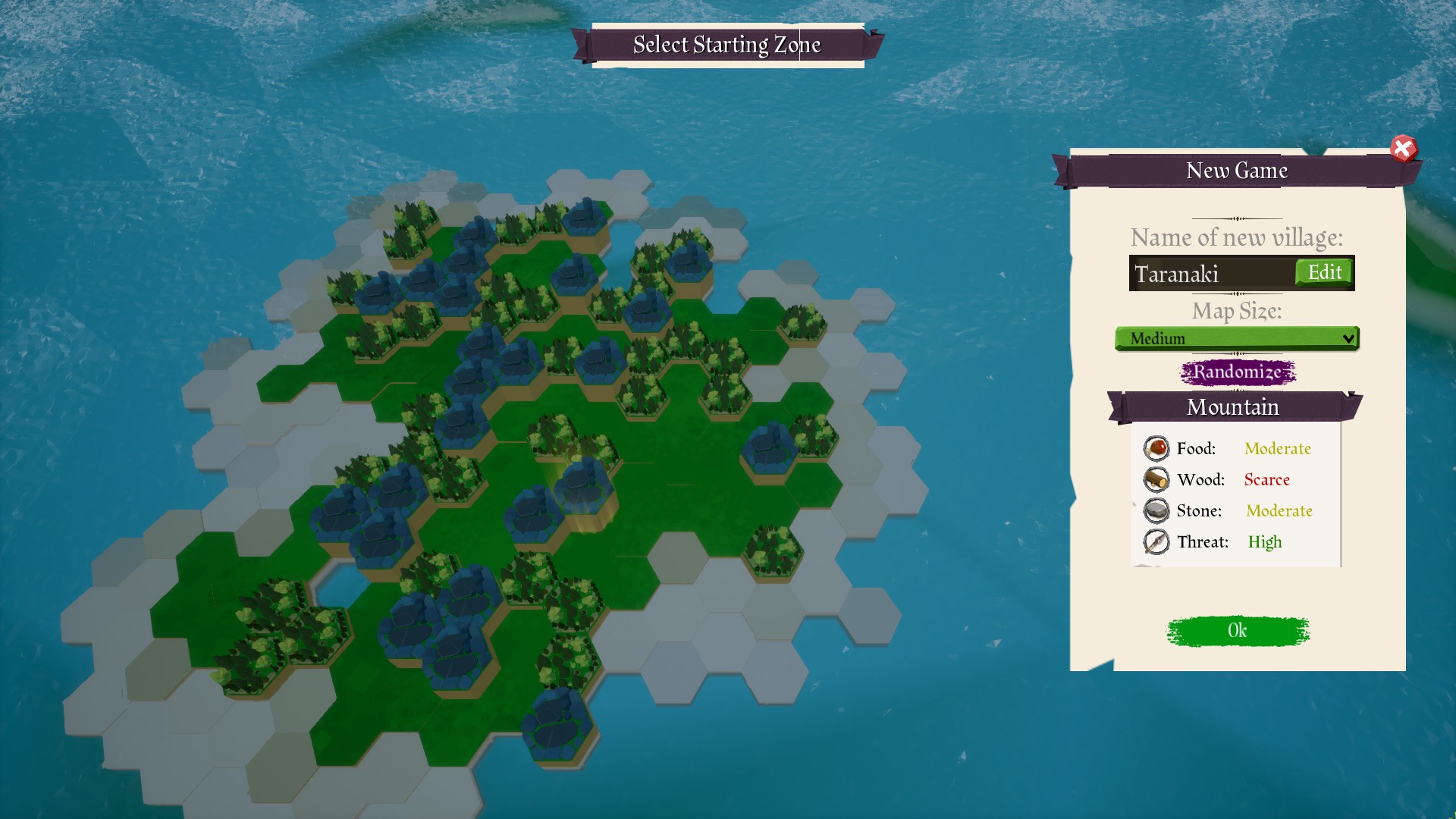 While the core game mechanics are sound and the game seems like it should be quite fun, there are a couple of issues that take the whole experience to rage-quit levels of frustration. The AI is such that the goblins seem to ignore warmth in Winter until it’s too late, sometimes whittling your tribe down by a significant portion of its members each cold season due to goblin stupidity. Making it even worse is the “Move to Campfire” button does only that: moves the goblin to the campfire. It doesn’t force him or her to stay there. In fact, a goblin usually loses warmth when you press this button. 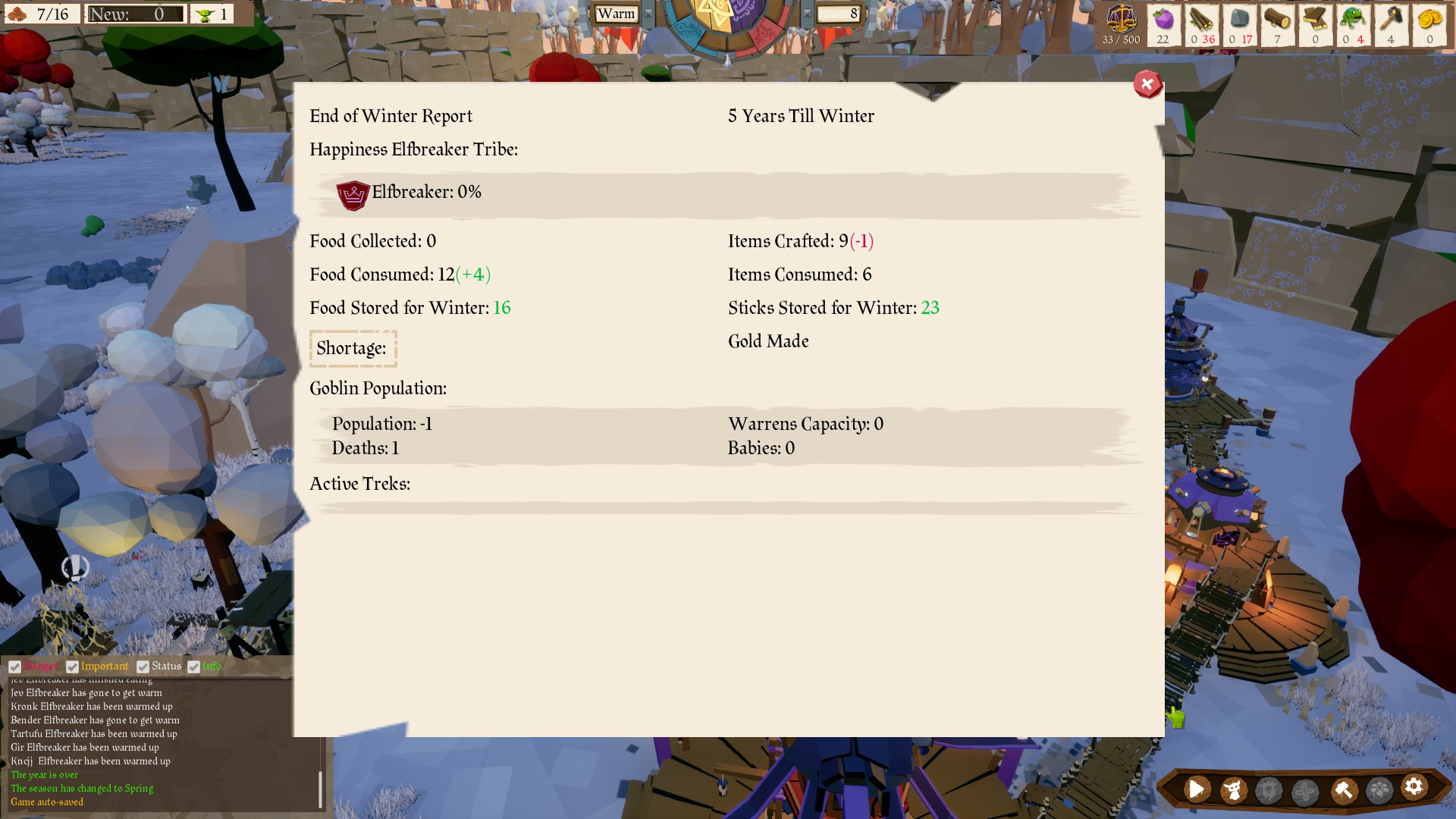 The second issue is one of balance in the early game. If you’re lucky enough to survive your first winter with most of the tribe intact then, if my three attempts are anything to go by, you’ll end up with a disease suddenly starting for no apparent reason in your population. Each game I’ve ended up with my tribe slowly dying from this disease as they can’t build structures and harvest resources fast enough to produce a healer. Maybe I’m doing something wrong, but it’s terribly frustrating, regardless.

I’m also not sure if there are any goals or if it’s just a very small sandbox. Many buildings are works in progress, but even once they’re finished it’s still not clear whether tribe creation choices have any bearing on your goals or encounters. There are some seemingly random story-type choices to make every now and then, too, but they seem to have only immediate effects; there’s nothing far-reaching that I’ve seen. The tutorial is very limited in both breadth and depth. 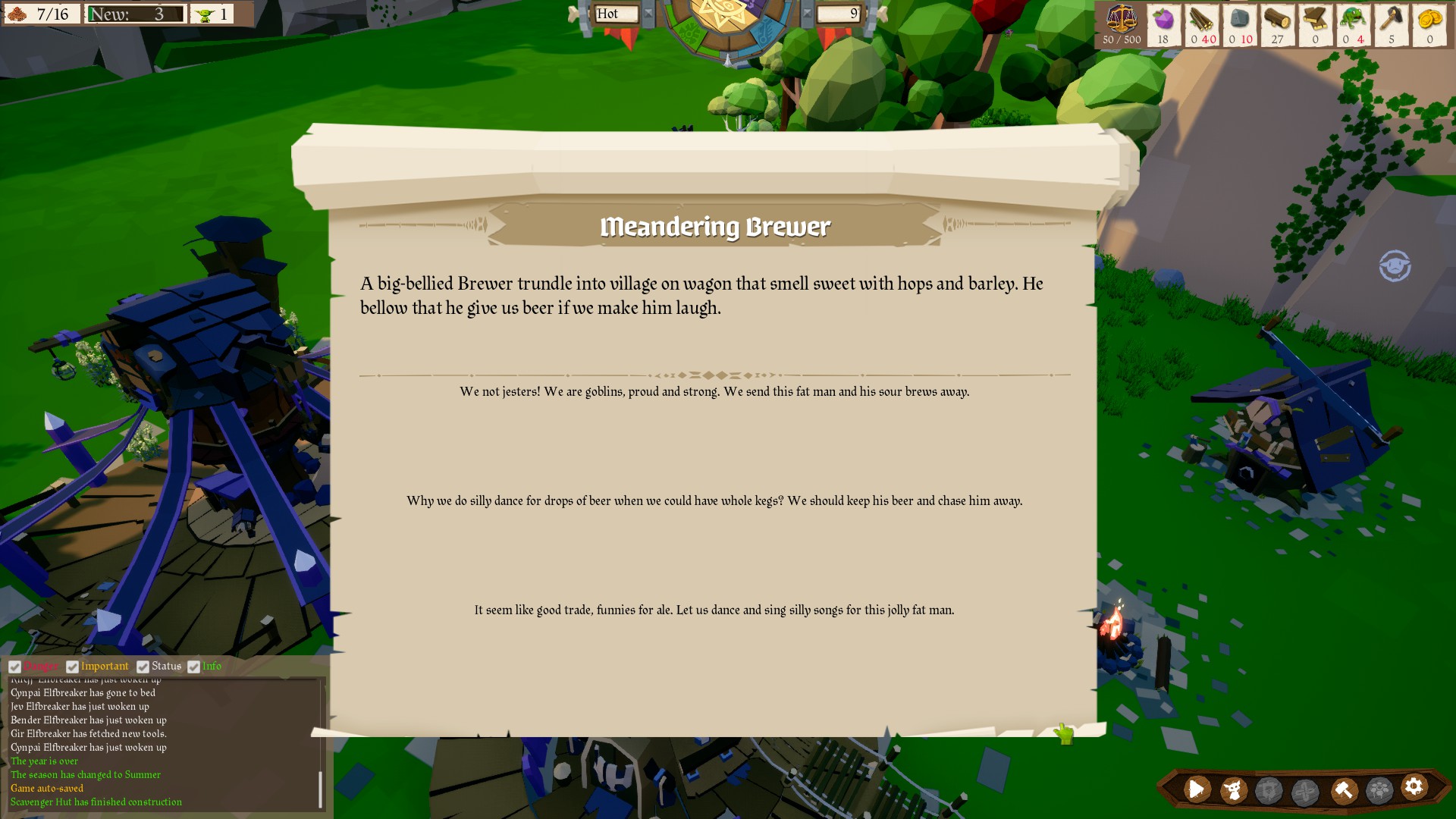 Finally, there are a number of bugs, which one expects in Early Access. Goblins remain idle when there’s work to be done, refuse to take resources where they should, or get stuck on objects. Skeletons spawn in the village, nowhere near a graveyard. The resource counters in the top right are wrong. And initial camp placement may spawn the camp in the air!

Goblins of Elderstone is promising, but has a long way to go. There are game balance issues to be addressed, bugs to fix, and a lot more content to add. I’d consider it more a playable demo than a full game at this point.

Even if it weren’t so expensive I’d be cautious recommending it in its current state, but the asking price is much too steep anyway, making my decision for me. Keep an eye on it, for sure, but it’s not ready for purchase just yet.