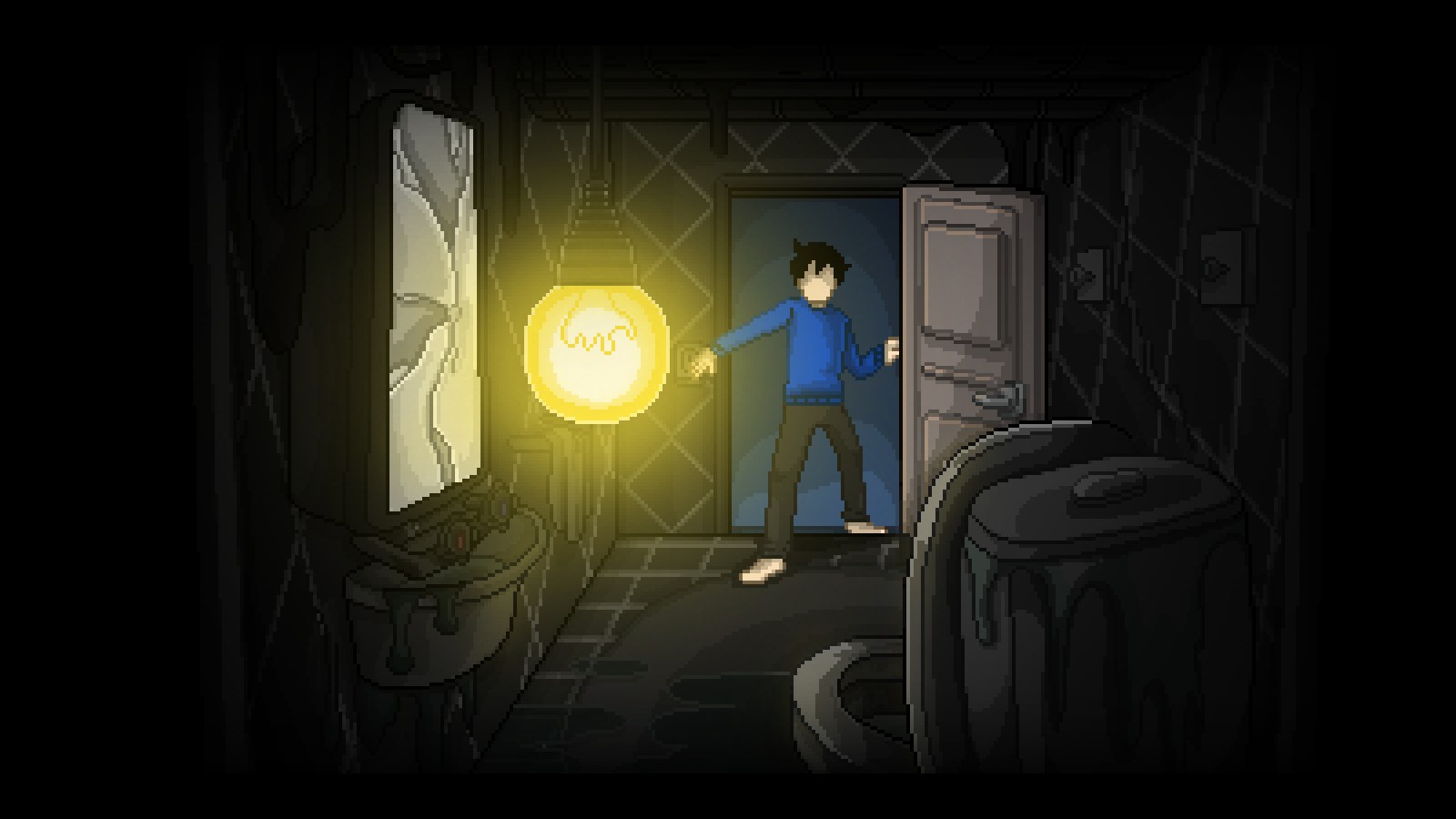 Quinn, I think I know who kidnapped you. It was the developers!

While being with other people can be a hassle, like strangers getting in your way at the store, it can also make your day slightly better, especially if you’re hanging out with friends, but being alone can also be great. Finally being able to sit down and get some work done, where you would otherwise be distracted, or recharge those batteries so you can go out energized for that next hangout. However, there are situations where you just need someone to be with or even help you, like when going into a room of strangers, whenever you need to vent your frustrations, and also when you end up getting kidnapped and put into a strange room, just to name a few.

One silent night, Quinn gets an unwanted visitor that knocks him unconscious after a day of hard work. When he wakes up, instead of it just being a dream, he finds himself in a dark room, with the only light coming from a computer on a table. When he ventures towards it, he sees a chat that ends up to be linked to an unknown person, and that person is you. Will you stay and help Quinn? Will you be considerate or harsh? Will you two become friends or will he hate your guts? 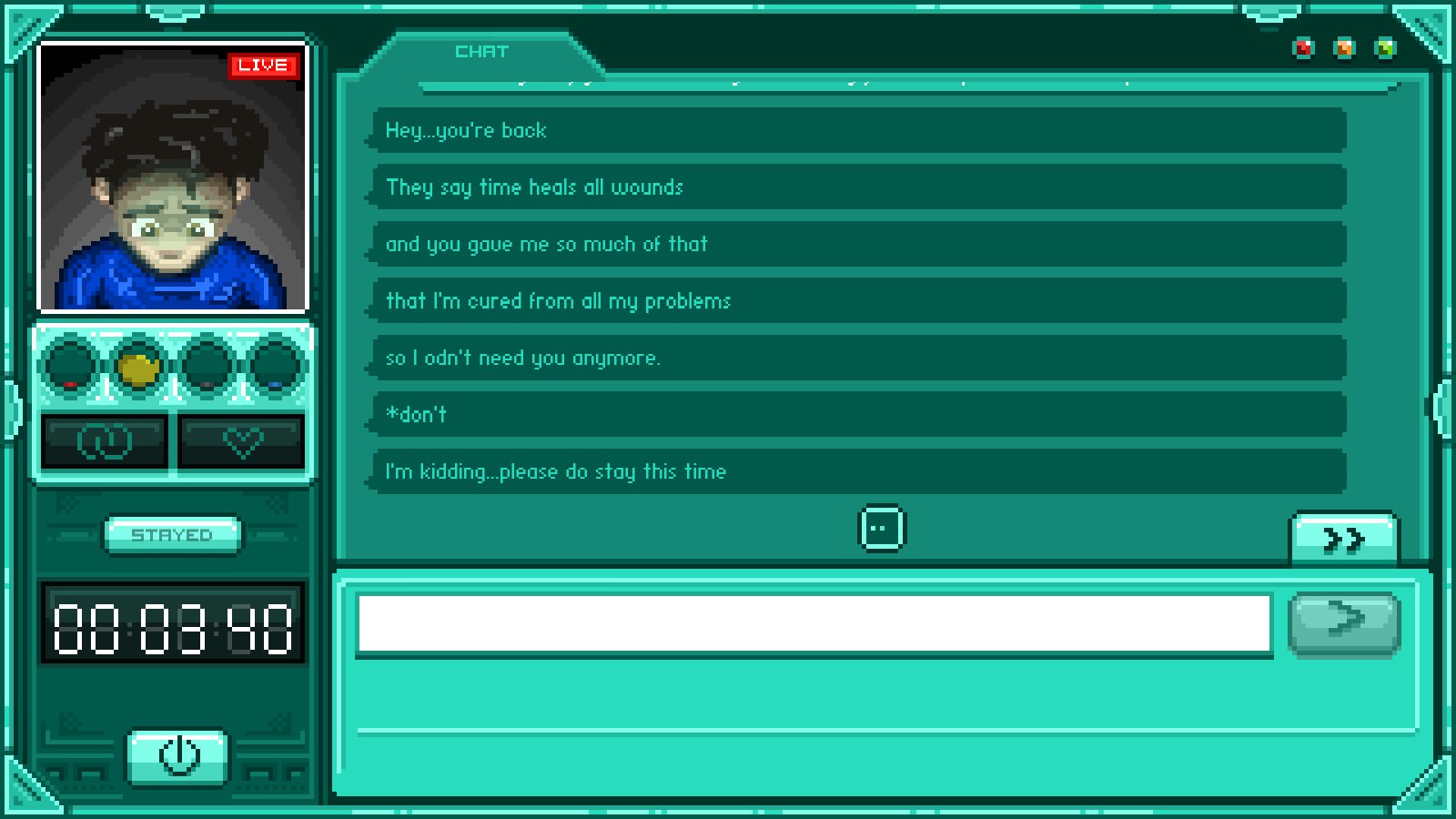 Contrary to many other games, you don’t control the main character. Instead, you play as someone that suddenly finds out that a chat opened up, connecting you with Quinn, along with a face-cam aimed at him in the corner. In addition, you can also see how much you emotionally bonded, and how much he trusts you throughout the game. You will also be able to see a clock, which keeps track of the time that you spend with Quinn… or the amount of time you leave Quinn alone. This element doesn’t represent the time when you actually take too long to respond, but your actual time away when you close the game. If you decide to take a break for a few hours (or a lot more), when you come back, you may see that his trust towards you is now lowering, and he also mentions how rude it is to not tell him that you’re leaving him alone. Remember, you are his only connection in that house, and he relies on you guiding him out. 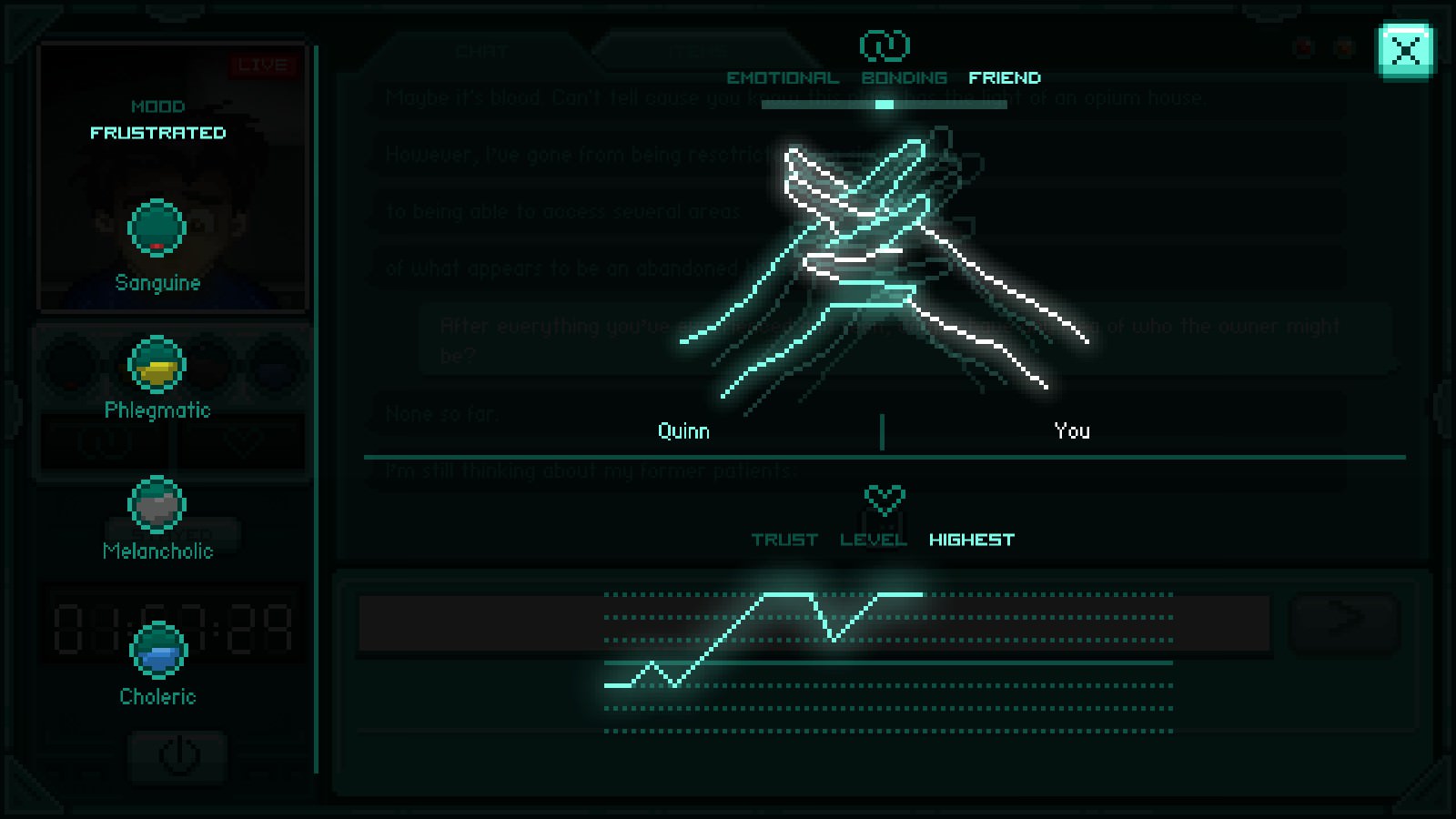 Building trust and bonding with Quinn depends on what you choose to say. Do you want to talk to Quinn about what is going on in his mind? Do you know when to joke around with him? Do you push him to do (or not do) something he wants to? Things like that. He can even rebel, in the sense that after you make a comment that pushes his feelings, he will go on to destroy the only device that is connecting the two of you (don’t worry though, you can restart at the chapter you’re on). Or you can push him to make a decision that will cause him to die. A nice addition to this is that, while the choices you can make are only a few words or so in the box, you will never be in a situation where the choice was totally different from what was actually said. Once you click a choice, it will be typed up and the game will wait until you are absolutely sure that you want to send it.

I would be lying if I said that I felt guilty at the thought of leaving him alone. I even felt guilty by saying something that was going too far in Quinn’s eyes. STAY definitely banks a lot on the player connecting with Quinn, and sadly this can fall into the pit of being annoying for some people, like other games that deal with mental health.

Although I had a slight hope that there would be choices acknowledging that you have access to the cameras and that you can choose to not tell Quinn (possibly having him find out later in the game), tell him early or later on, and have that affect the relationship between you two. It would be an interesting decision to make, especially when you first meet and he mentions looking for cameras that would be watching him. 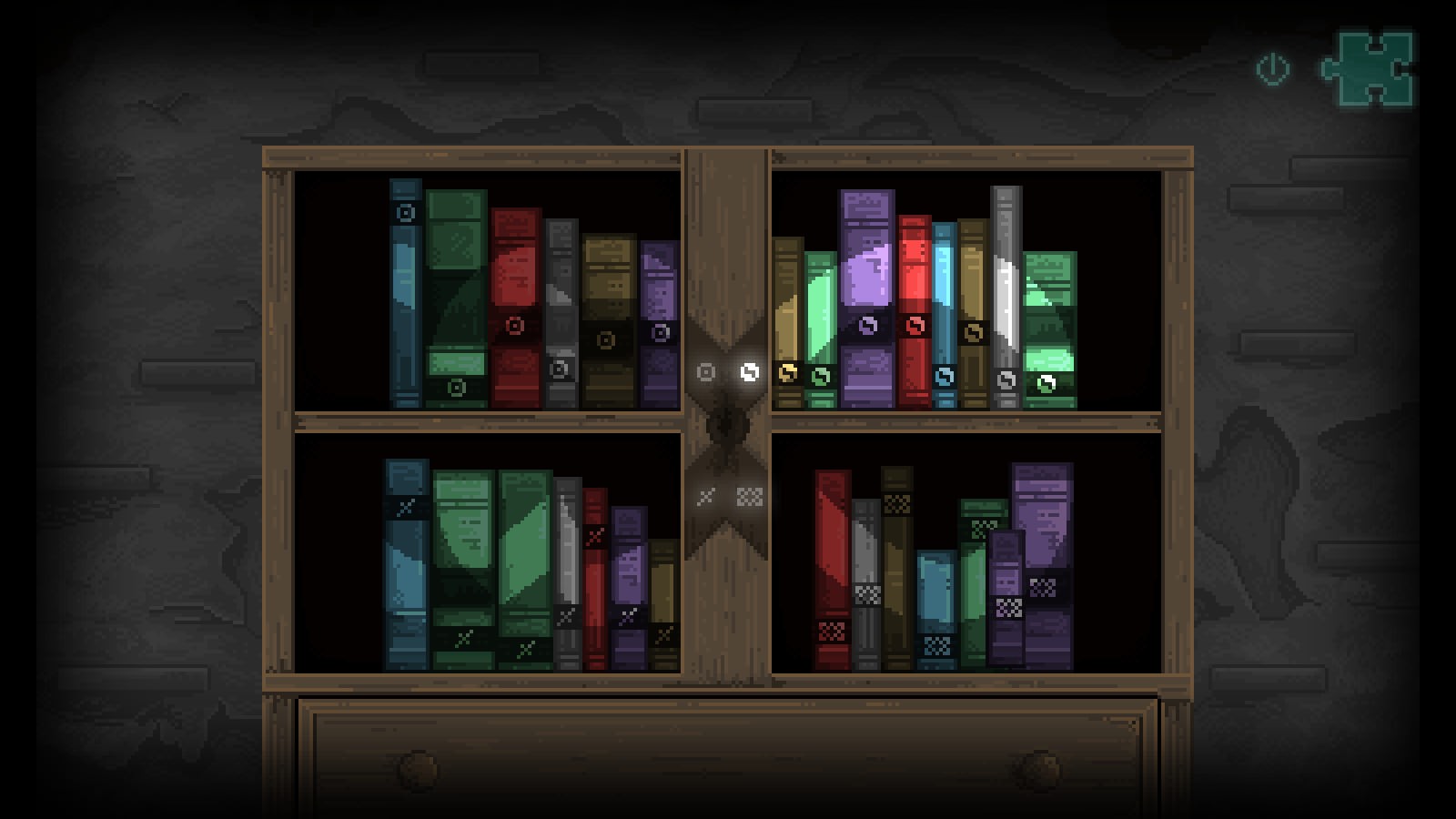 While for the most part you are separated from Quinn, there are a few instances where you control him. Whenever a puzzle pops up, you take control of Quinn as he is the one in the rooms and not you. These puzzles are, for the most part, easy, you would either figure it out almost immediately, or you would realize what the clues were trying to point you to. There are only two puzzles that stand out as difficult, and, without giving too much away, you’ll know when you get to them. However, you won’t know whether you’re close or not to solve them, and you won’t also know how you were supposed to achieve the specific conclusion once you learn about the solution. It would be a little bit more helpful if there was a way to get worded hints, instead of trying to decipher them out of the visuals, as they can be very helpful when you search for them in the forums. Nonetheless, I do also wish that one puzzle didn’t require you to look up letters that come from different languages in order to solve it.

Once a puzzle is solved, a new room will open up for Quinn, and hopefully gets him closer to the exit. With progression also comes with learning more about our lovely protagonist as you can choose to ask Quinn about his past and get to see some flashbacks of his life. 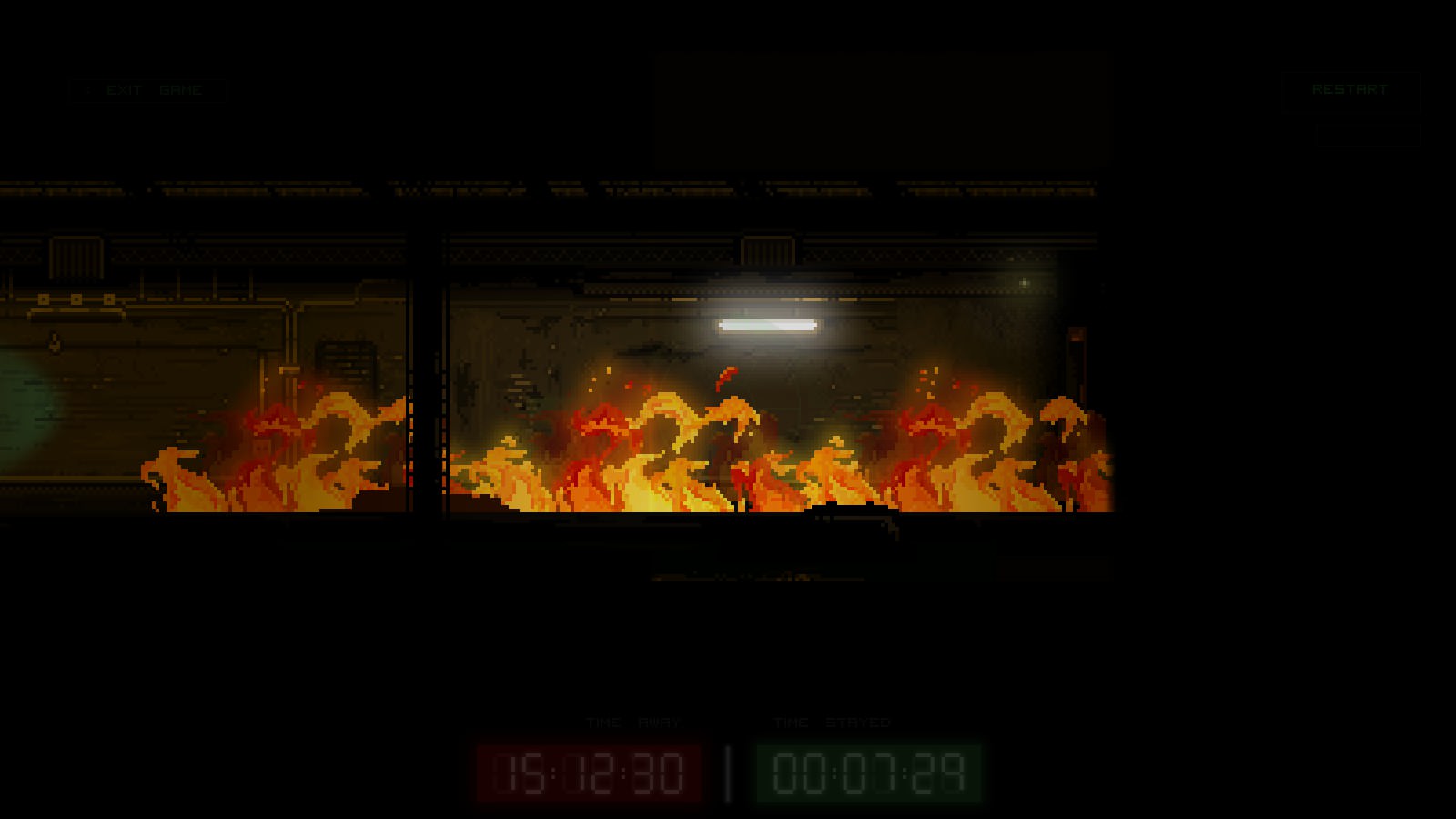 If you decide you want to try to get other endings, or perhaps see the rooms you didn’t get to see, STAY is replay-friendly. Once you have an ending under your belt, you will be able to skip any puzzle you come across, as well as the dialogue. Even if you don’t want to see the different endings, I do suggest doing it just to see the different ways Quinn can die. I feel horrible saying this, especially after getting attached to him, but they are pretty hilarious.

STAY has a nice and appealing pixel art that is simple but clearly shows the expressions Quinn has. The rooms can be haunting, as it reminds you that Quinn is stuck in a horrible environment, but they can also be beautiful. The animation is also smooth, and a late-game puzzle has my favorite animation out of the whole bunch. The writing also feels like you’re talking to a real person, and a nice touch that I do love is that Quinn takes time to read your messages and the sound effects for him typing even stops when you can see him thinking or not having both hands on the keyboard. Even a cat gets realistic keyboard noises when it walks on it! 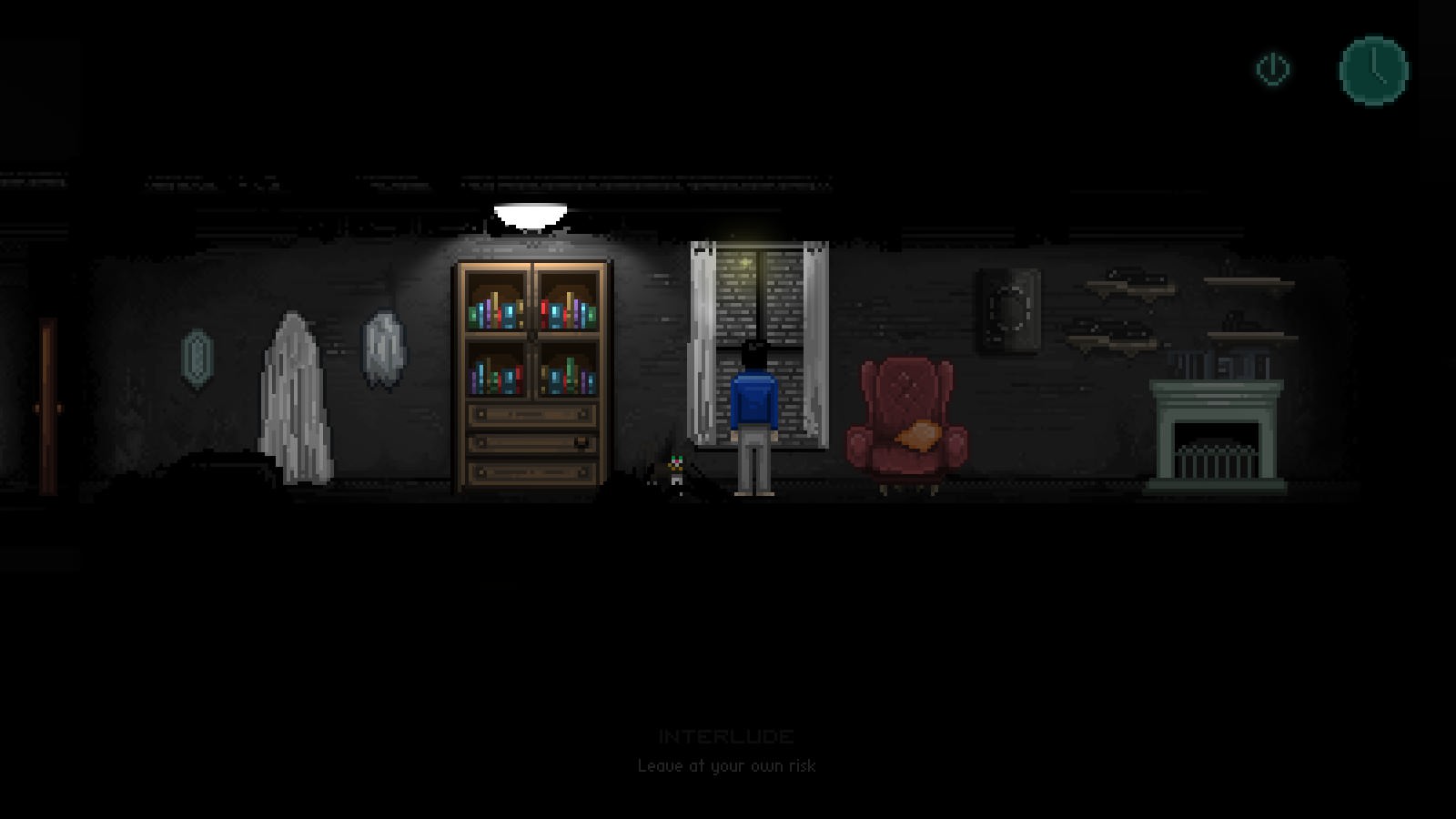 STAY is an interesting game that I’m glad I got the chance to play. While there are a few puzzles that can stump you, and one that is just downright frustrating, the story and the interesting premise are implemented in a great way. They give a sense of getting to know someone over time, while also making you think over how being away from Quinn might affect him and what will happen if you’re away for too long. If you’ve been looking for a puzzle game that has a mix of easy and challenging puzzles with an equally good story and premise, STAY might be just up your alley.