Garrison Archangel is a fast and brutal sci-fi fighting game with a good customization for Mechs and some interesting mechanics, but it is still lacking in content, polish, and bug fixing.

Garrison Archangel is a sci-fi, futuristic, fast-paced fighting game featuring (for now) 1v1 mech duels using melee and ranged weapons, plus a variety of defensive and offensive accessories and body parts. There is not much to say about the storyline, in fact there isn’t even one! But for a fighting game that is forgivable. Contenders fight one against the other in various arenas, some standard, and some others rather unconventional, with dangers to look out for throughout. The depth of customization for the Mechs is rather decent, but other problems like instability, the tutorial currently not working, and unexplained statistics, prevent this game from truly being a good one and make it fall into mediocrity. But, as an Early Access title, there is always hope.

General Gameplay
Garrison Archangel features three single-player modes and a multiplayer lobby-based duel mode. We have Arcade mode, a succession of 1v1 duels against random AI-controlled opponents of a chosen difficulty, ranging from Easy to Insane. In Survival, you will have to survive multiple encounters with the same Mech. Then there is Horde mode, where you will be put into a virtual city with multiple enemies coming to fight you in waves. For the Multiplayer mode, it features Elimination and Duel modes and is only 1v1 for now.

The gameplay is what you would expect from a fast paced fighting game and it will be explained in detail in the Combat Section. As far as customization goes, you will be able to craft your very own Mech choosing from a good variety of body parts, weapons, and accessories. Many things have a unique special ability, a weight value, a melee damage boost value, and a boost to HP or Stamina. All these statistics are displayed in your Mech panel when customizing it. It will be up to the player to choose what his Mech will specialize in: ranged combat, melee, evasion, etc.

Combat System
The combat in Garrison Archangel is very fast paced, and based upon dodging, parrying and triggering special equipment abilities at the right time to overcome the enemy while staying alive. To defeat an opponent you need to get its HP to zero. There are some core mechanics to combat, the first is Dodging, which is used to completely avoid damage for a very small time window, but if used too much will lead to overload, and your Mech becomes unable to dodge for some time. You must learn to use it wisely and with correct timing.

Another core mechanic is Stability, all weapons have a Stability Damage statistic, when a Mech’s stability goes to zero, it will fall to the ground and be disabled for a short time. Mechs on the ground are, however, not able to be targeted for some reason, so destabilizing an enemy only serves as a “break” for a few seconds.

Many weapon special abilities will have unique effects or unique conditions to be triggered, for example there is a sword which has the special ability to perform a powerful slash, but to trigger it you need first to land one hit from each direction (top, bottom, left, right) on your enemy.

Maybe there are other mechanics I am not aware of, but since the tutorial was not working at the time of this review and just displayed a black screen (!), I could never know for certain.

Content
For now, the content is quite limited, and it’s understandable for an Early Access game. There are some parts to customize your mech with and try various combinations and load-outs, but combat and the available game modes soon become repetitive. There simply is not much content to dig into at the moment.

Balancing
I felt like ranged weapons are very under-powered compared to melee ones, their knockdown capability at range can be useful to stop a charging enemy, but still are very poor in terms of damage, save for the Railgun, the only exception.

Challenge
Enemy AI on Hard and Insane sure is challenging and can give even fighting game veterans more than a match. 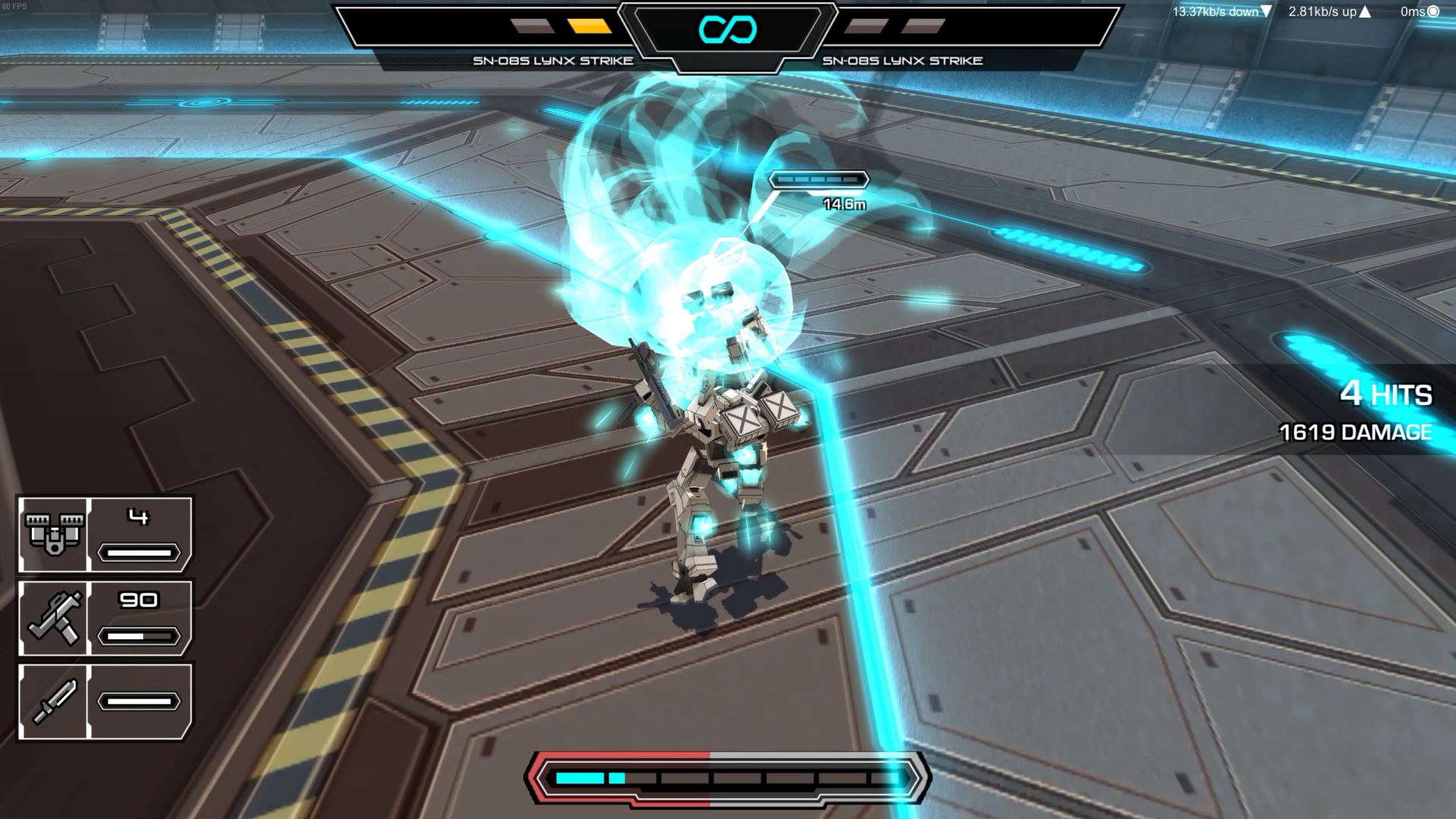 Graphics
The game’s graphics are quite minimalist with mostly geometric shapes. There is not much modern eye-candy such as reflection on textures, detailed shaders, weapon marks after hits, or dynamic damaging of enemy mechs. Overall, the graphics might be clean enough. They remind me a bit of Zone Of the Enders in their style, but are very simplistic and not up to par for a 2018 game, even for an indie.

Sound
Sound effects are mostly decent enough, with a soundtrack matching in quality, but nothing so outstanding as to give particular praise to.

Stability
The game crashed multiple times for no reason, both in single and multiplayer, needing a restart or even a process termination from the task manager. Stability issues must be fixed.

AI
The Enemy AI is quite good at higher difficulties and can be as challenging, if not more, than human players.

Bugs / Issues
The tutorial is currently bugged and displays a black window. Some mech load-outs cause a bug that does not allow a match to start properly and force you to quit it and change the load-out. 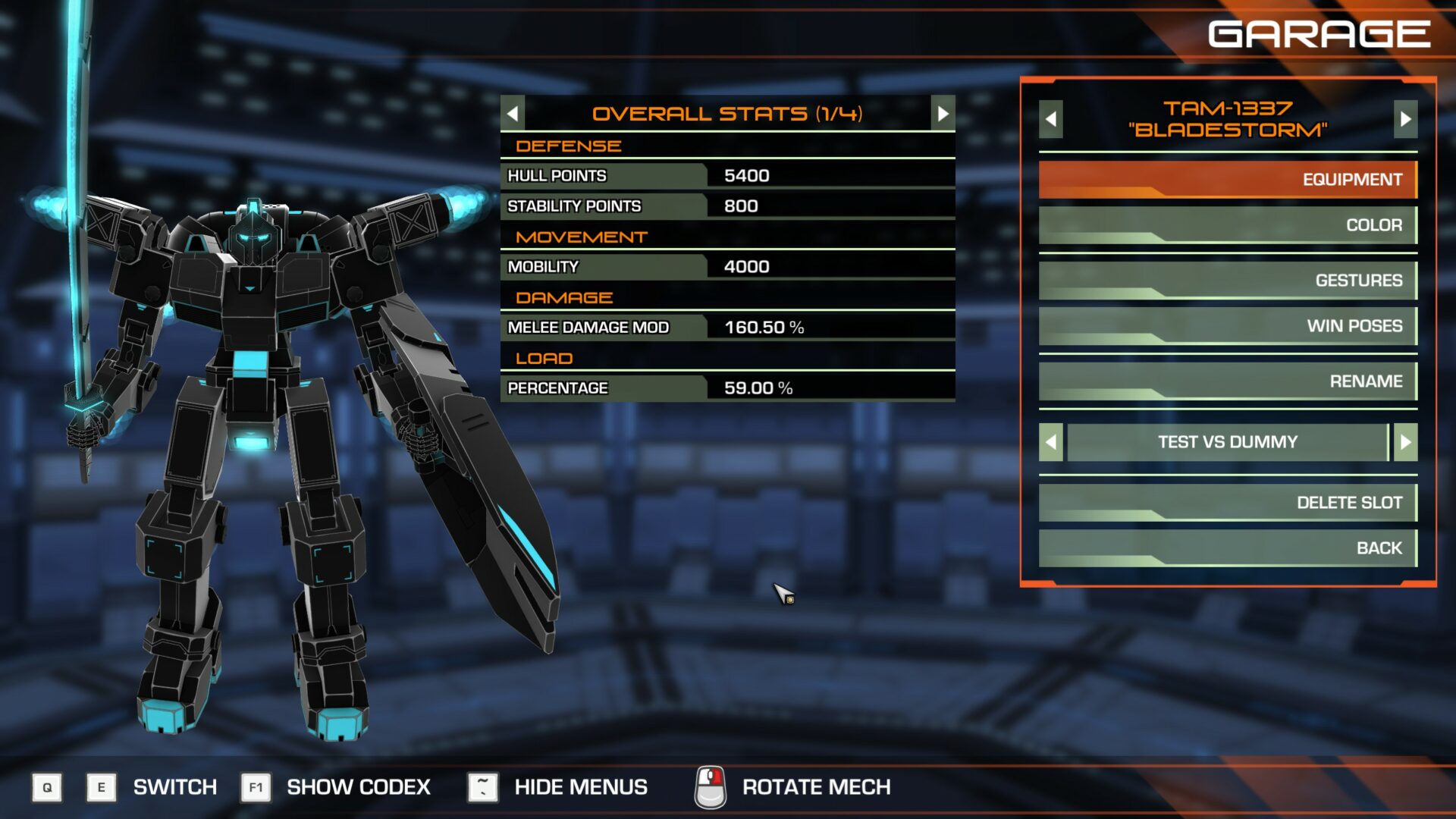 Garrison Archangel is a fighting game with good concept and good customization, but for now it lacks content. The game needs substantial polishing with the combat system, as it frankly is messy and confounding in some situations, needing a bit more balance adjustment and stability fixes. There is a long road ahead for this game if it wants to be among the best.