A decent space shooter with light strategy elements, that could be a good game for this price range but is impaired by some debatable design choices and rather unfair balancing in later game.

Space Battlecruiser is a somewhat classic top-down space shooter with some light strategy elements added to the mix. In this game, you will be in command of the last Rebel battleship remaining in the sector, fighting an all-out war against an overwhelming enemy, with more resources and firepower, in a last desperate struggle to reverse the fate of the conflict. You will have to decide what parts of the sector to attack, containing enemy facilities, bases or fleets, and by winning each battle the enemy will be weakened depending on what you destroyed, but beware, as factories and supply lines will increase enemy power each passing day, and the more you progress, the stronger the opposition will be. Overall, Space Battlecruiser has a quite decent gameplay setup and development, but also some flaws and rough edges we will better see in the following parts of the review.

General Gameplay
Space Battlecruiser’s gameplay divides between combat and management of your ship in the starmap. For now i will talk about the latter. In the starmap, presented as a top-down isometric view of the sector, you will be able to see all enemy facilities, fleets, starbases and outposts, and start with only one free sector. To progress, you need to select one of the occupied sector and fight a battle to free it from enemy presence, the battle will be different based on the type of occupation: a fleet will result in a battle against multiple enemy ship waves, an outpost or starbase will see you to destroy a space station as main target, while attacking a supply convoy will result in the arduous task of stopping various cargoes along with a whole military escort to defend them.

Each time you move in the starmap, or hold position if you want, a turn passes, and the enemy gains strength from mining and supply routes, build new attack fleets that will move and hunt you down through the map, and also increase its tier bonus, a global bonus based upon how many resources the enemy has at its disposal, resulting in stronger, better armed enemies each time the tier increases. To stop this arms race, you need to destroy mining facilities and supply routes, the problem is they are very hard to attack at the beginning and will only get worse the more the game progresses because of the tier system, resulting in basically impossible battles a bit further in the game.

Of course, also you have the chance of upgrading your ship, and that is done with two resources, Scrap and Components. They are both found in destroyed enemies and collected using collector drones during a mission. The amount varies based on the strength of defeated enemies. Not all weapons and technologies are available immediately, as some need to be researched with blueprints rarely found when destroying new enemies. Upgrades include better engines, more armor, more damage for weapons, unlockable active skills with limited uses per battle, and more.

Your main and sole objective remains destroying the Mothership, the enemy final boss that can be engaged at anytime as long as you can reach the sector where it is located, but of course having all the upgrades is recommended as it is an absurdly difficult fight.

Combat System
Combat in Space Battlecruiser is with top-down view, in a classic shooter fashion. Using the mouse we will direct all the cannons in a direction, and then use left click to fire light and medium guns, right click to fire heavy ones. Digits from 1 to 6 will activate special abilities such as collector drones (that can be also destroyed!), deploy minefield, launch torpedoes and use other special weapons once unlocked them. One of the most fundamental abilities is the directional energy shield, that can be rotated with Q and E and will block all incoming damage in the facing direction for a limited time.

Enemies are of different types and sizes, ranging from small but numerous fighter jets to huge dreadnoughts filled to the brim with guns. Each enemy has a specific armor rating, and too much armor means your shots will not even do any damage, so you need to break that off using heavy guns or special abilities before you can do damage with all your weaponry.

In each battle you also have the chance of finding random events, which are either derelict vessels, that can be destroyed for extra materials, or asteroid fields, useful for kiting the enemy around and make them crash into asteroids, as for some reason enemies are not very good at piloting inside these fields.

Escaping a fight is always a viable solution after you destroyed a part of the enemy forces in a sector, as by escaping you will repair and refill all special weapons, and depending of how much damage you delivered, also weaken the enemy forces temporarily, ready for another attack the next turn.

Overall, i found the combat in this game alright at first, but then as the turns progressed, i really felt like the balance of the player’s progression did not match the enemy’s, leading to very unbalanced fights where you literally have to stand against dozens of high level ships at once, leading to your destruction in a matter of minutes because of the simple raw DPS they can throw at you all together. The lack of any decent AoE weapon does not help in fighting larger enemy groups. The armor value is also off in some enemies, resulting in ALL weapons bouncing off for zero damage, effectively making those enemies impossible to kill.

Also, fights of critical importance such as Supply Lines or Mining Outposts are, in my opinion, already rather unbalanced without enemy bonus tiers, and with bonus tiers, they become absurd, leading to the enemy to have more and more bonuses all the time because you cannot do these important fights until i suppose very lathe in the game where you have decent upgrades.

Balancing
Balance is fair up to a point, but when the enemy gets too many tier bonuses the game becomes less and less balanced, up to a point where you literally cannot win any critical fight anymore, leading the enemy to have more and more resources indefinitely, as you struggle to get a few pieces of materials from the very few still manageable fights you can find. Also, the final boss regenerating health basing on how many resources the enemy has is a very debatable design choice basing upon what i said before about mining / supply fights.

Challenge
This game provides Moderate challenge up to a point, then it becomes High just because the player is underpowered. 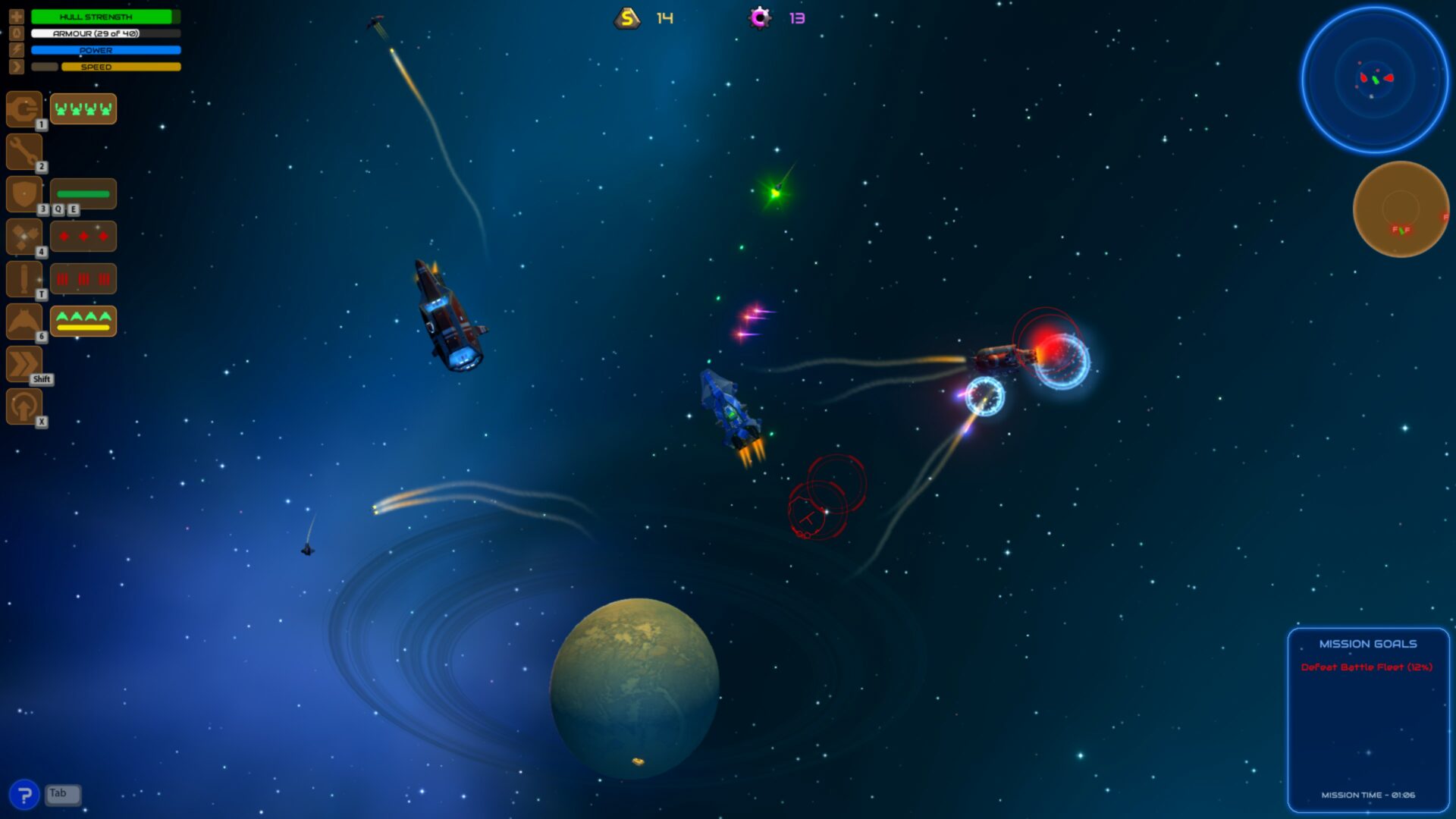 Graphics
Models are of sufficient quality, as are effects, textures, particles, but nothing really stands out from the “generic space game” feeling. An anonymous and already seen art and design style that fails to impress.

AI
Enemy AI is quite capable, able to dodge your incoming shots even, but fails to pilot properly in asteroid fields. 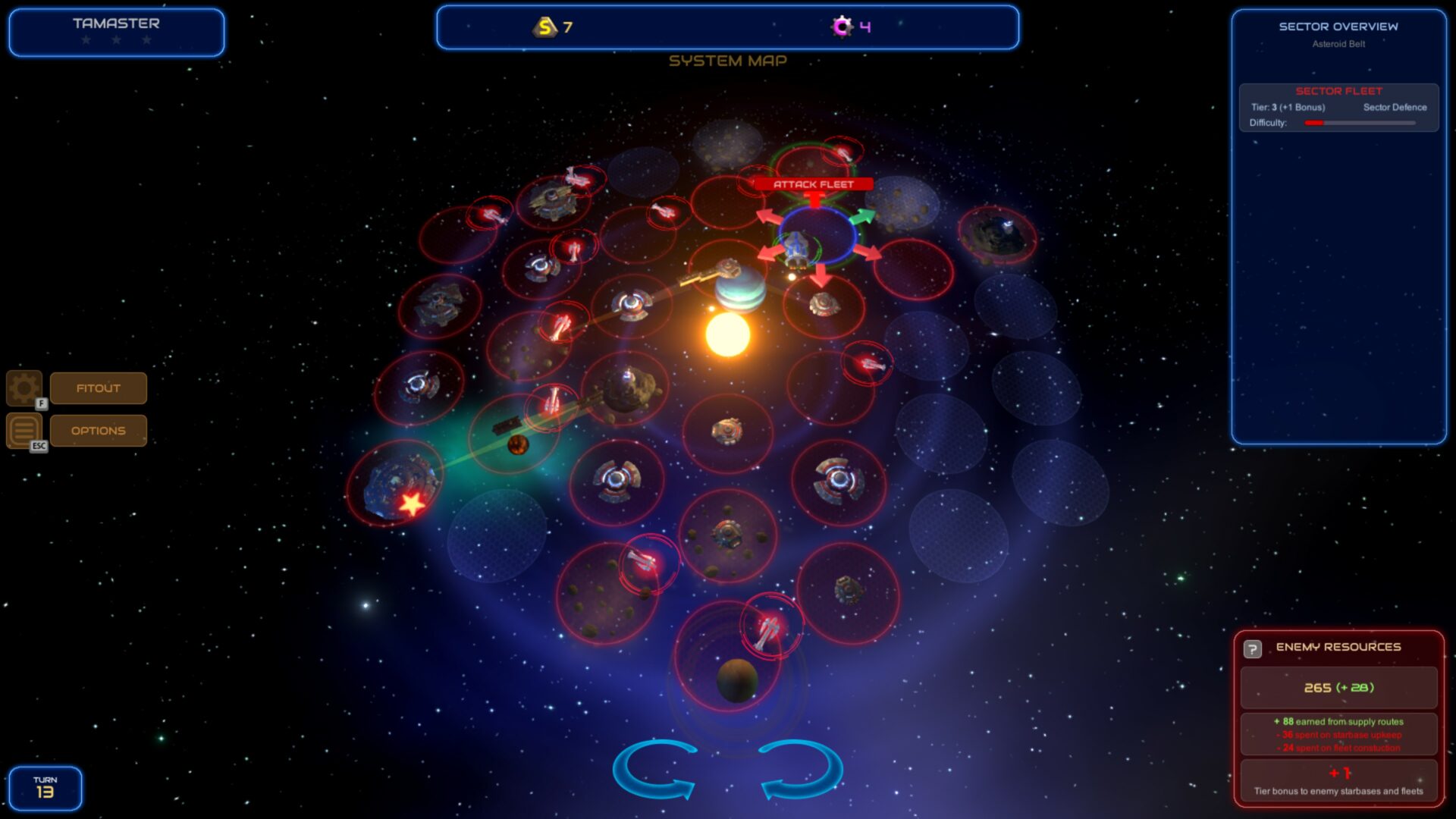 Space Battlecruiser is a decent space shooter game with several flaws and rough edges, nobody was expecting incredible features in this prince range of course, but still there is wide room for improvement which here is lacking. Suggested if you really love space shooters and don’t mind a rather broken and unfair balancing.

Editor’s note: during our time with this game, the developer has been very proactive in taking Tamaster’s concerns on board and making updates to the game trying to get the balancing right. At the time of publishing he hasn’t quite hit the nail on the head yet but judging by his dedication so far, I’m sure he will soon.