Much like the previous game, Bloody Trapland 2 still remains pretty much the same, a tough as nails platformer that will test your patience, skill, and resilience, as you progress through its various levels and zones. While the game is on Steam’s Early Access program, the game seems to be almost complete in terms of content, with only one zone missing, which, once it releases, will bring up the total count of different zones up to five.

In terms of variety, to be quite honest, what you have here is pretty much what you should expect from most types of similar games. There is currently a forest zone, a desert zone, ice, lava, and one final zone missing as it’s being developed. Each zone is obviously thematically different, and each one has their own unique set of traps that you’ll have to avoid. However, all of them seem to share the standard arrangement of spikes and buzz saws that only seek to cover themselves in your blood. There are also some collectibles that you can get which will allow you to unlock hidden levels, but at the time of writing, I’ve yet to delve into this part of the game because I’m still struggling to get past the main levels. 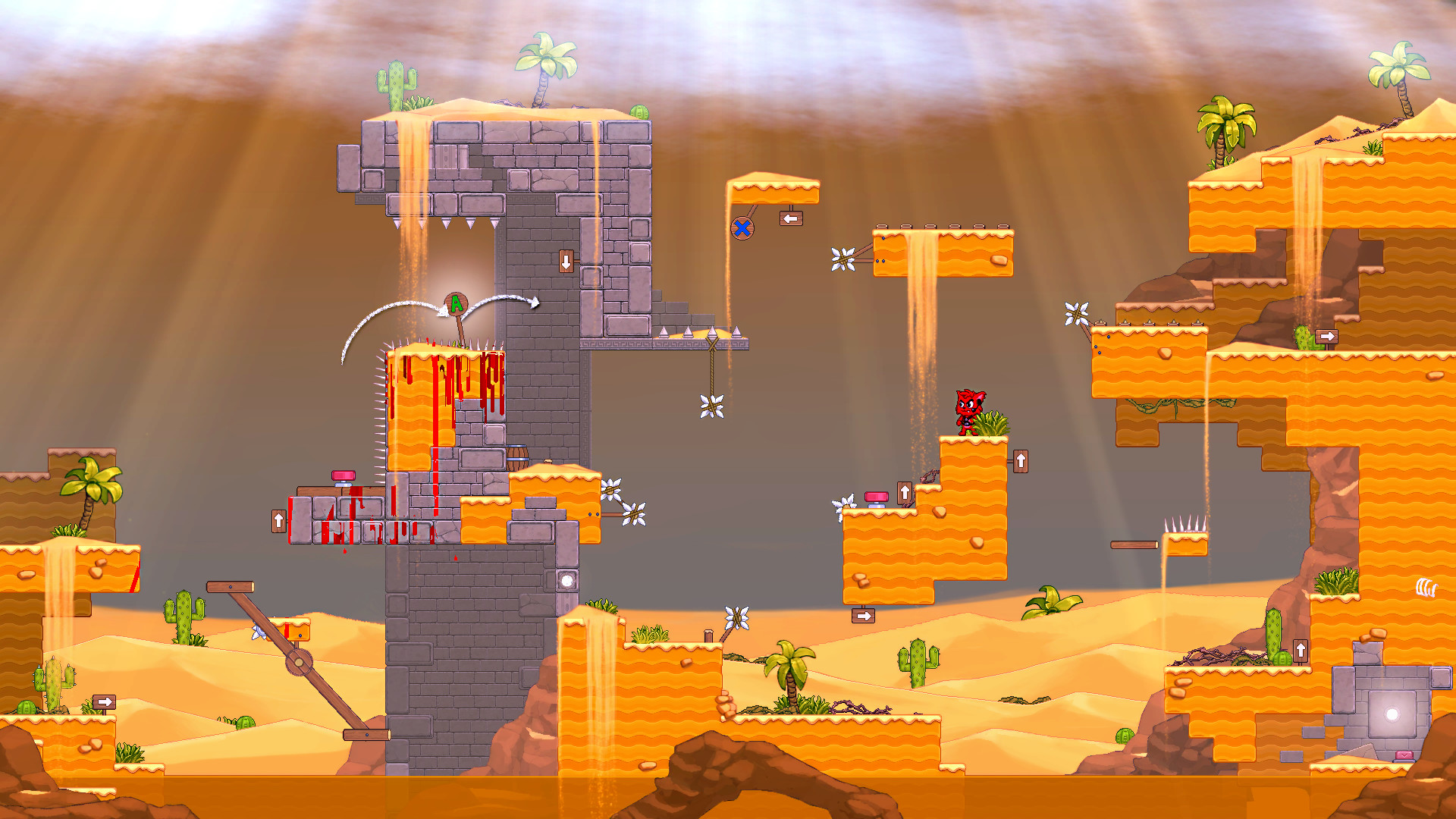 While the variety of each individual zone might not be the game’s strongest suit, where the game truly shines is in its level design. The assortment of different traps, one right after the other, combined with tight passageways filled with spikes, places where you need to time your jumps and dash in the air by crouching, or even wall jumping, makes up this really engrossing experience. Nonetheless, one must always keep in mind that this isn’t your standard platformer, as the chances of you dying dozens of times before figuring out how to make it past a certain point on a level are very high. Still, thankfully the game lets you change the difficulty, which enables checkpoints throughout the levels, so you don’t have to start over every time you die. Despite the overall pretty good level design, there are a few occasions where it’s hard to distinguish what’s in the background of the level and what’s actually a platform where you can jump on.

Like its past iteration, the game also comes along with a fully-fledged level editor that lets players create their own levels and share them via the Steam Workshop. The game also shares the completion rate of those levels and how many people have actually completed it, as well as its rating given by the community, which should help you filter through all of them when you’re looking for the best. For this type of game, the addition of a level editor always seems to expand its potential by tenfold, as long as the community is active enough to make use of it… 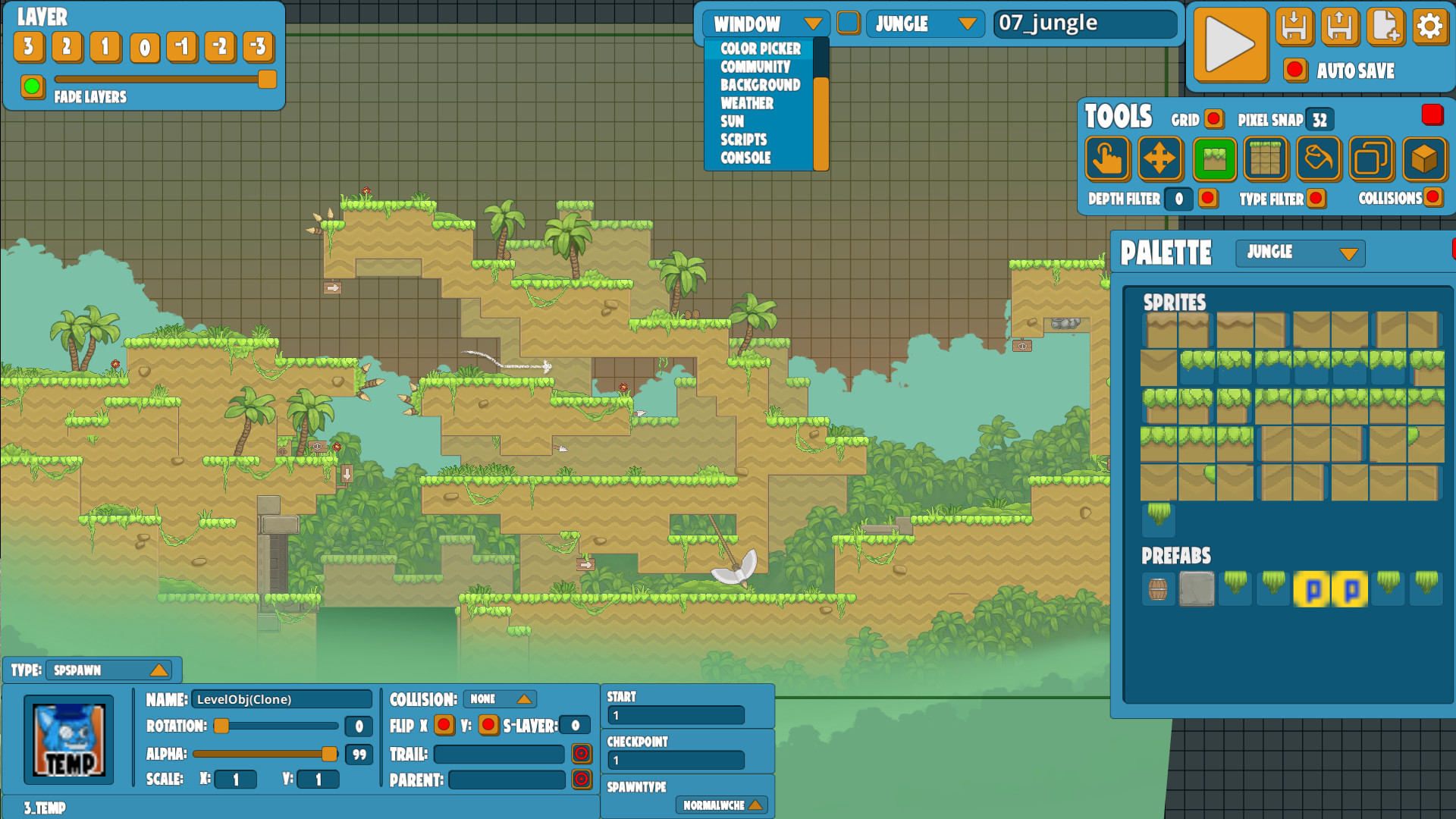 With that said, if you’re considering buying this on your own and expecting to find people to play with whenever you want, I think you’ll have a tough time, as I’ve been unable to do so. Ideally, this is a game that you want to get alongside a few friends, so you can all play together and even slaughter each other by activating certain traps on some of the levels. However, this brings up the major problem that the game currently has, and that’s the online multiplayer.

Having played with other people, I can safely say that this is still far off from where it should be in terms of performance and networking. There were a few times in which moving traps were not synced to all four of us, so we could see someone else run past a buzz saw and survive because on their screen the buzz saw wasn’t there. In the same sense, it seems that as you extend your play time in a specific lobby, the game seemed to start lagging out, with other people warping forward and back, making it hard to figure out where they actually were. Now, you might be wondering why this is really an issue because this is advertised as a co-op platformer, so the reason why this is a problem is because if you jump on someone’s head they will die, so most often than not, we found ourselves killing each other even though it appeared that we were not on top of someone else. 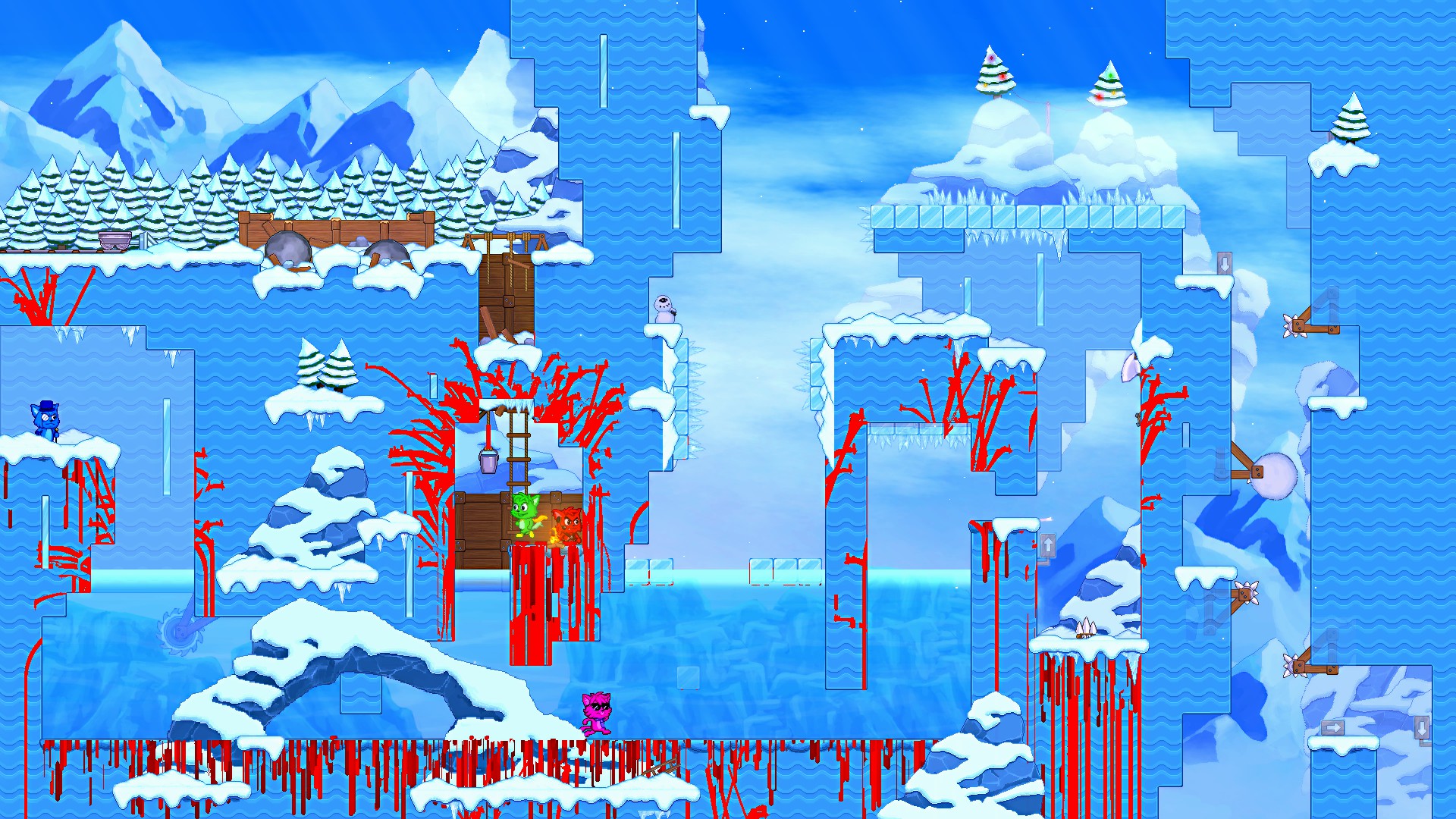 In terms of controls, I have to admit that these also seem to suffer when playing online, as when I played all by myself, the game felt much more responsive overall. In spite of that, another issue that is really apparent is that the game is really unoptimized, and part of it feels to have something to do with the fact that the game doesn’t have a frame rate limit. Because of this, my graphics card reached its highest temperature ever, 80ºC, and as soon as I manually limited the frame rate the temperature dropped drastically. Still, I still feel like the game shouldn’t be as resource intensive as it is at the moment, even with the capped frame rate.

At the moment, Bloody Trapland 2 is a pretty solid hardcore platformer to play on your own, which is rather unfortunate, as the game was designed with co-op in mind. The disconnecting and synchronization issues that I’ve experienced while playing, plus the lack of an active player base, sadly make me feel that most people are better off playing the first game if they want to have some fun with their friends. Still, I’d personally recommend to keep an eye out for this one if you’re a fan of the genre and if you’re looking for something to play along with three other people, but even if you’re just looking for something to play on your own, I can’t really see any reason as to why you shouldn’t just wait for the final release.