PREVIEW: Armed to the Gears

Armed to the Gears is a rather promising mix of genres, however for now it offers very little content and is early in development. In the future, keep any eye on this game because it could be one of the next hits in the sci-fi shooter genre.

Armed to the Gears is a 3D isometric shooter set in the distant future, around the year 2090-2100. Humanity has accomplished significant technological breakthroughs and these have lead to the formation of new powers and a new arms race, featuring automated machines as the primary backbone. Over time, a totalitarian power has risen and so have the forces of the Rebellion that oppose it, trying to regain freedom for the people. You will be one of the Rebellion’s pilots, tasked with countering enemy operations and conquering strategic points in order to win the war. In a few words, Armed to the Gears is part shooter, part tower defense, and part RTS as it combines features from different genres in an interesting mix.

General Gameplay
The gameplay in this title is pretty straightforward.  After a brief tutorial that will teach you how to move, shoot, pick up items, and deploy buildings for your bases, you will be granted access to the campaign which currently only features the three initial levels. At the start of each mission your objective is always the same, to capture enemy Control Points. Around the map there will be marked neutral locations that can be conquered by either you or the enemy. These are control points, and capturing one gives players a certain amount of resources, used to build defenses and facilities in the surrounding area to better protect the point or aid you in your battle.

Defending the Points while also attacking enemy ones will be the key to succeeding in a mission. While enemies will have mobile units and factories at its disposal, you will be alone, your Turrets being the only additional help in defending the captured Points. There are various types of Turrets, like the machine-gun, plasma, tesla, and even deployable airstrikes or buildable repair platforms you can go back to when in need. Each of these buildings costs a certain amount of resources. More Control Points mean more resources, exactly 100 per point, so players had better get to capturing!

Basically, the game boils down to capturing a point, filling it with Turrets and eventually Facilities, and then proceeding to the next Point, possibly in the same direction the enemy is coming from to also help your defenses while you go that way. Your defenses are weak in comparison to your main mech, as even the humble machine-gun deals a lot of damage to most enemies. Defenses are mostly for keeping the enemies at bay long enough for you to conquer other Points successfully.

Killed enemies and destroyed enemy facilities will drop several items such as health, ammo for your secondary weapons, or even whole new weapons that you can equip for the duration of the mission. To equip different weapons in a permanent way you need to buy them at the hangar, in the main menu, for credits. I have done all three missions available and racked up only 58 credits, a bit low considering the next cheapest weapon, the Laser Gun, costs 100 credits. I guess the amounts of money and upgrades needs some re-balancing. Anyway the basic machine-gun was more than sufficient to destroy most enemies.

There is a very odd difficulty regulation system in this game.  It is a parameter in the options settings with a number for difficulty, going from 1 to apparently infinitely high. Since there is no explanation of how this works I left it to the default value which is 1. A menu with difficulty selection like most games would be preferable. 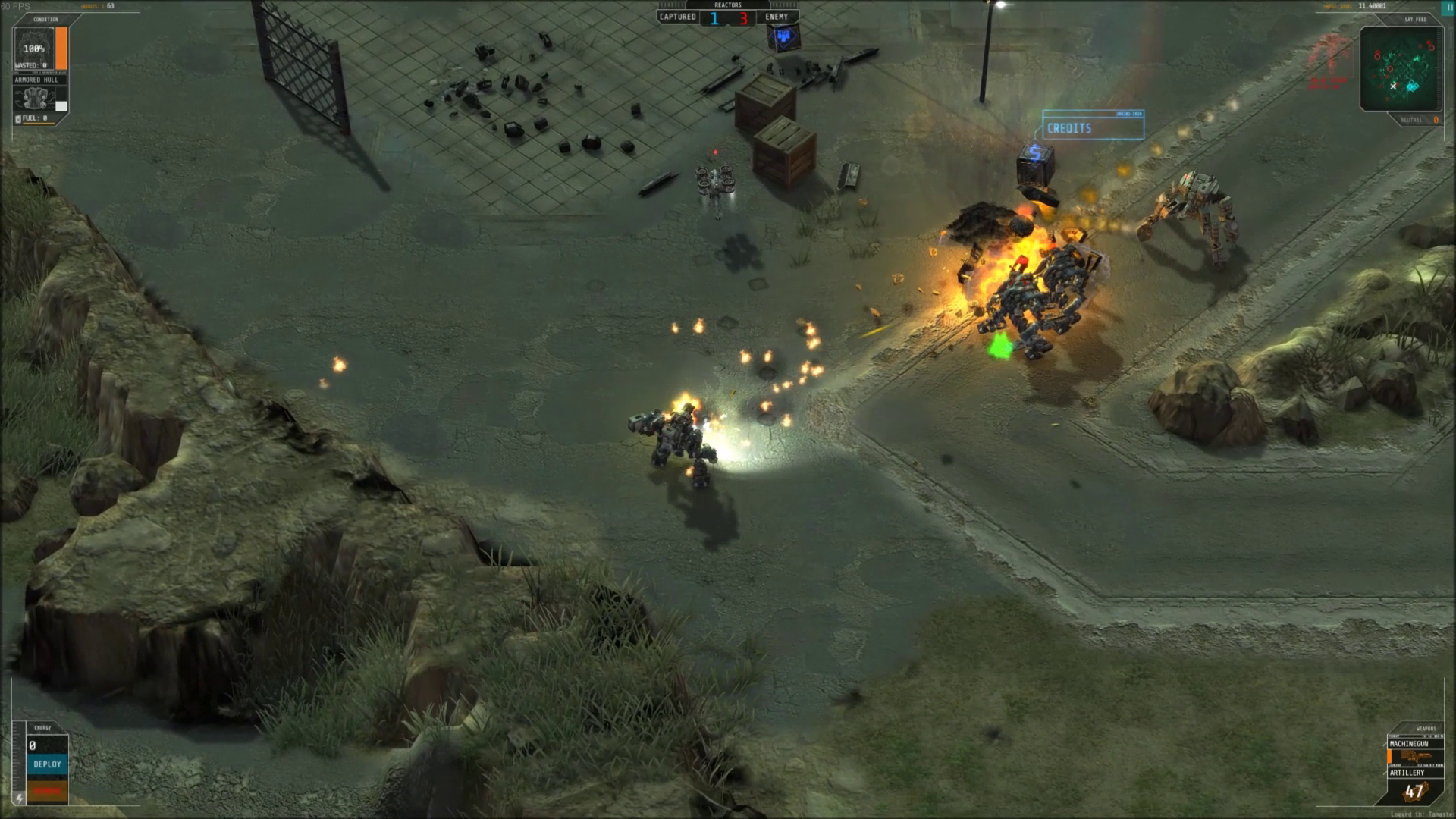 Combat System
Combat is what you expect from a classic isometric shooter. There is an aiming reticle controlled by a mouse that can be freely aimed at enemies, left click to fire, right click for secondary weapon, and shift for Speed Boost if you have enough fuel. Eventually, you can pick up armor to boost your capacity for survival and deflect a certain amount of damage from the Hull. If not, damage will be done directly to the Hull.

There are various types of enemies, equipped with different weapons, laser,electrical, plasma, and even missiles. Turrets, walkers, spider-like mechs and organic enemies will be your adversaries, with some even being giant towering mechs heavily armed and deadly. Mostly enemies will form a line and proceed to your controlled Points and try to conquer them.  This is the most common behavior I encountered so far, while some others stand still and defend enemy Points. The combat overall feels satisfying and consistent enough, and has also some destructible environments, at least partially.

Content
So far the content is very minimal. There are only three missions within the game, and that took me little more than half an hour to complete. Hopefully, there will be more content in the future.

Balancing
Since I did not have an explanation of how the difficulty system works, I will base my reflections on the Default value (1). Enemies are mostly on the weak side and should not give you trouble if you are moderately fast and accurate in engaging them. The base weapons (machine-gun) are already very good, additional weapons are a bit overkill. Secondary base weapons are OK for buildings but rather poor against infantry, while additional secondary weapons,  like the Rocket Pod, is absolutely overpowered and can destroy anything with just a few rocket volleys. Some balance is needed in the future to give more the game more challenge. 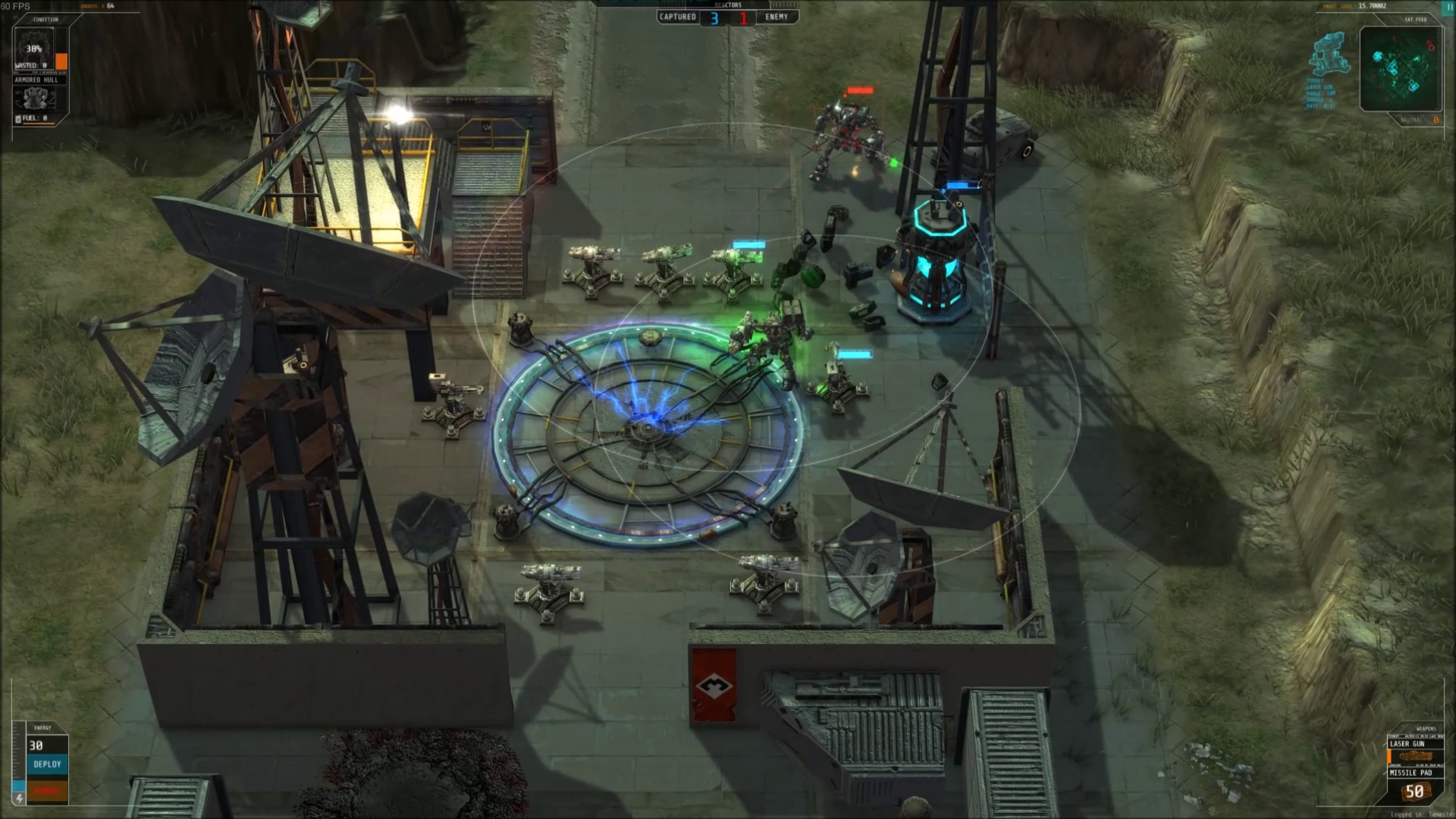 Graphics
I found the graphics to be bit dated to be completely honest, models and props are fair enough, and the destructible bits flying around with physics and  enemies shattering to pieces also look good. However, overall these graphics are not up to par with 2018 standards as they do the job but barely more than that.

Sound
Sound effects and music are of average quality, nothing bad or good to say about them.

Performance/Stability
The game currently has an issue with 100% CPU usage and this can be fixed by altering some proprieties in .exe compatibility. Still this should not be happening and so the problem remains. The game itself runs fine but having constant 100% CPU usage is not a good thing.  The game was stable, though, with nothing to report on that area.

AI/Quality of Life
Enemy AI within the game currently follows pre-determined paths to Control Points or just stay still and defend, attacking you and your Structures.  The menus and UI were adequate, nothing of note or any complaints.

Bugs / Issues
Resolution scaling of both the game and the UI are very weird. This game currently has unexplained black bands in a 16:9 resolution on a proper 16:9 display, and it has presets for weird resolution aspects. The resolution presets and how they scale interface dimensions need to be fixed. Other than this, no other issues. 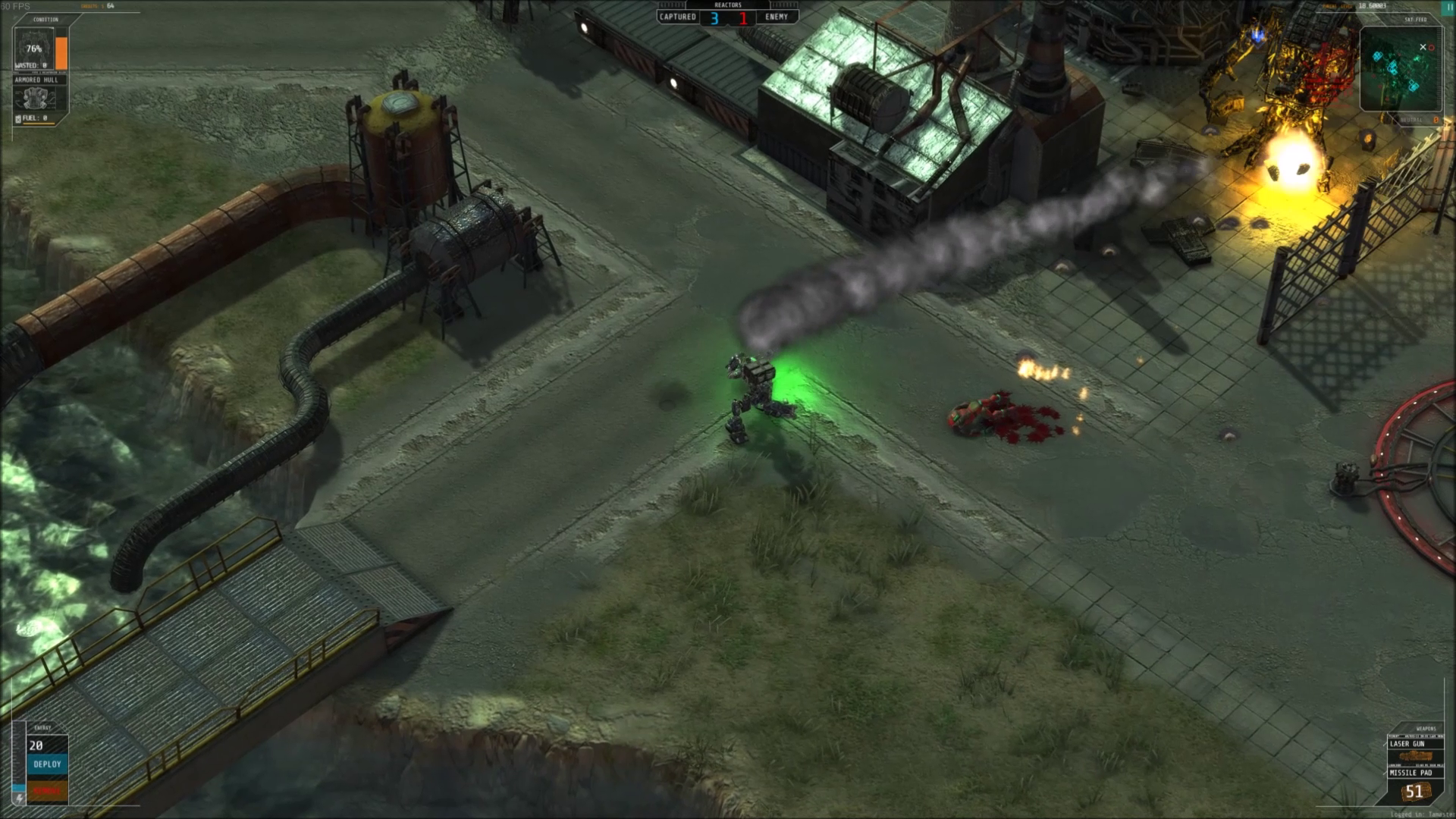 Armed to The Gears right now is a good concept, but offers very minimal content even for Early Access games. It feels more like a Tech Demo than an Alpha game at this stage. What little I have seen, however, I did like and cannot wait to see more features and content. This is a game to keep on watch for sure.