From the makers of This War of Mine, comes Frostpunk, a society survival game where you have to manage the last city on Earth, in the midst of a global catastrophe.

Having pretty much been sold on this game based on its premise alone, for the most part I dove into it blind. With that in mind, after spending a couple of hours with the game, it became apparent that it wasn’t exactly what I was expecting it to be, and I think that, for the very same reasons, it might also cause some confusion when other people play the game. While the game might look like a city builder, or a management game, as a whole, the game is more than that, and while elements of these genres are present, they’re not really what makes Frostpunk as engaging as I found it to be. 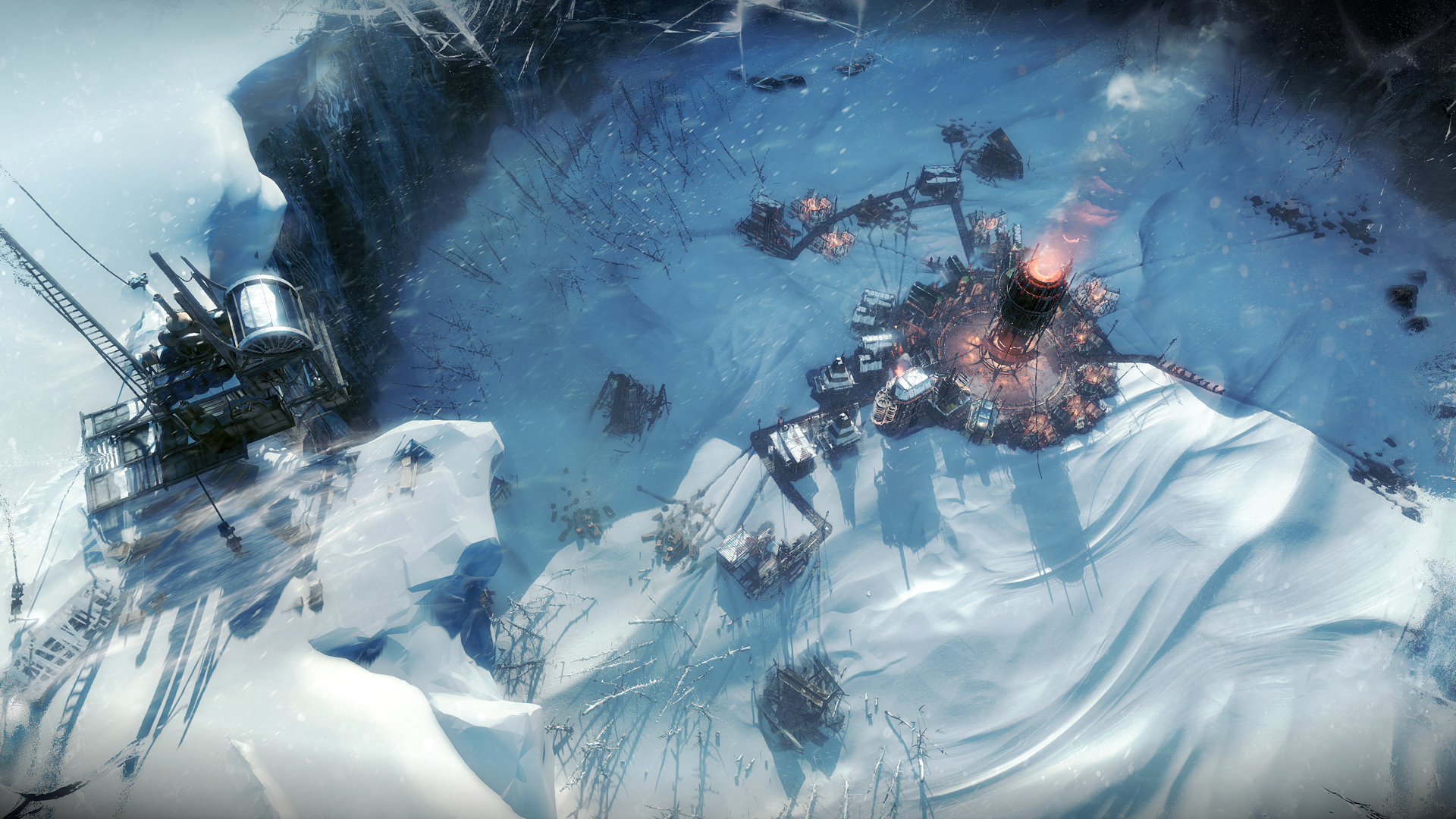 Initially, you assume command of a group of people that have abandoned London during an ever-increasing frost that is devouring the entire world. Your mission is to establish a city way up in the North, around one of several generators that were put into place while Earth’s temperature was still somewhat bearable, and hold on for as long as you can, hopefully until the frost has passed. While this is the main game, once you beat it for the first time, you’ll unlock difficulty customization options and two other shorter scenarios that you can also play, thus improving the game’s replayability by a fair margin.

These two other scenarios change the narrative and the way you play the game, particularly the resources at your disposal, the objectives that you must complete, and the challenges that you’ll face. These elements are what make these unique from one another, despite the fact that they still retain the exact same mechanics as the main campaign. 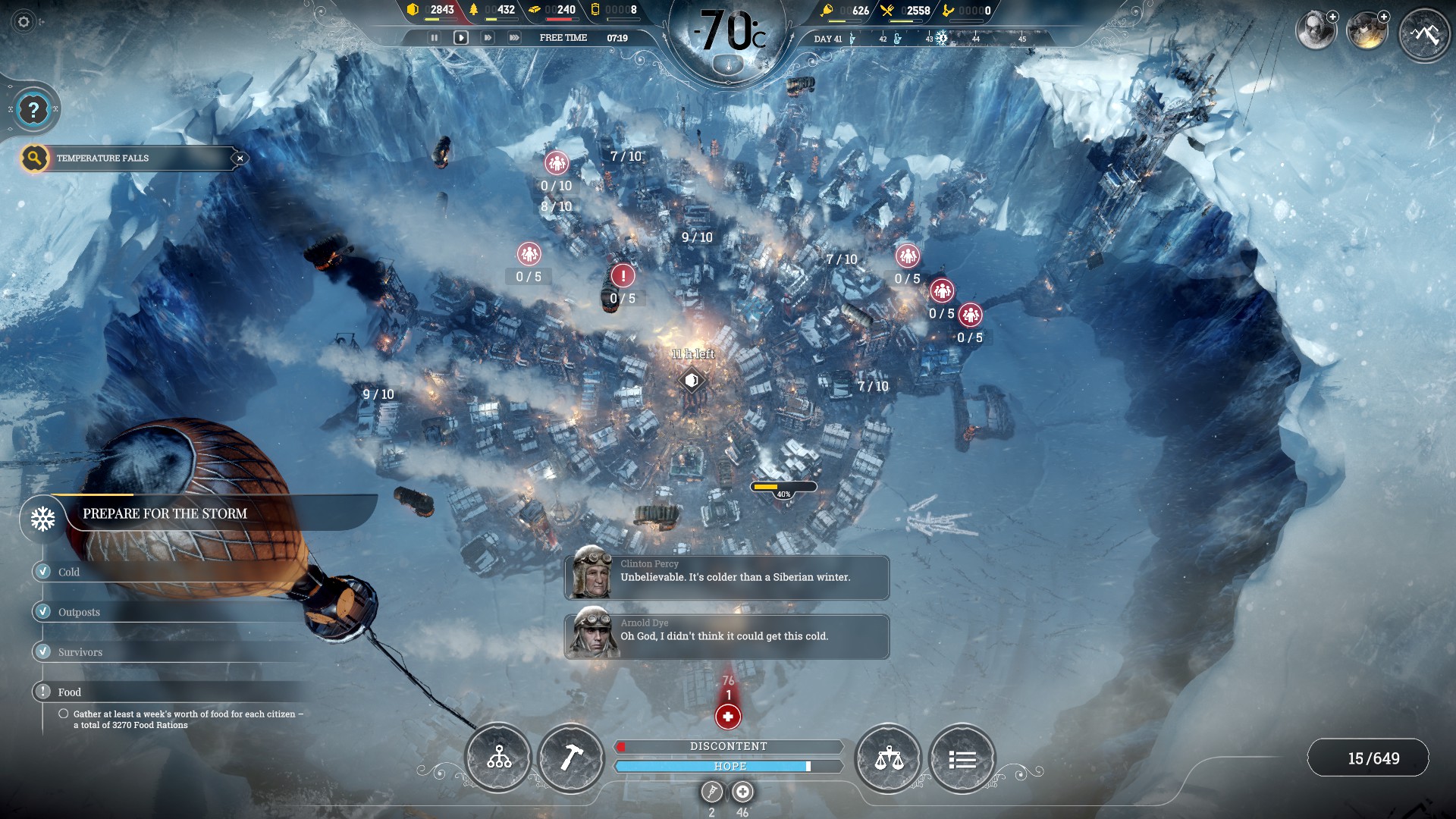 The game gives the player a great deal of freedom in terms of how you can organize the layout of your city, which I believe is also a unique thing to Frostpunk, the fact that the heart of your city – the generator – is at the center, and you have to build around it, in a spherical form, in order to take advantage of the heat that the generator produces. This ties directly to one of the game’s major mechanics, which is managing the temperature of each building, as it influences the efficiency of buildings as well as the health of every single person.

From the constant demand for coal in order to keep buildings warm, the generator running, and fueling all other sorts of contraptions that you may have, to the constant drastic changes in temperature, the player is constantly facing extreme danger from all sides. However, the type of danger that you’ll face, and the most suitable solution to deal with said danger will always vary depending on how you’ve structured your city. If you’ve focused on the production of coal in detriment of other resources such as wood or steel, or if you don’t have enough workers in order to keep a steady supply of food that’s enough to feed the entire populace, you’re bound to have to adapt sooner or later, especially if it’s your first time playing and you have no idea what challenges the game will throw at you next. 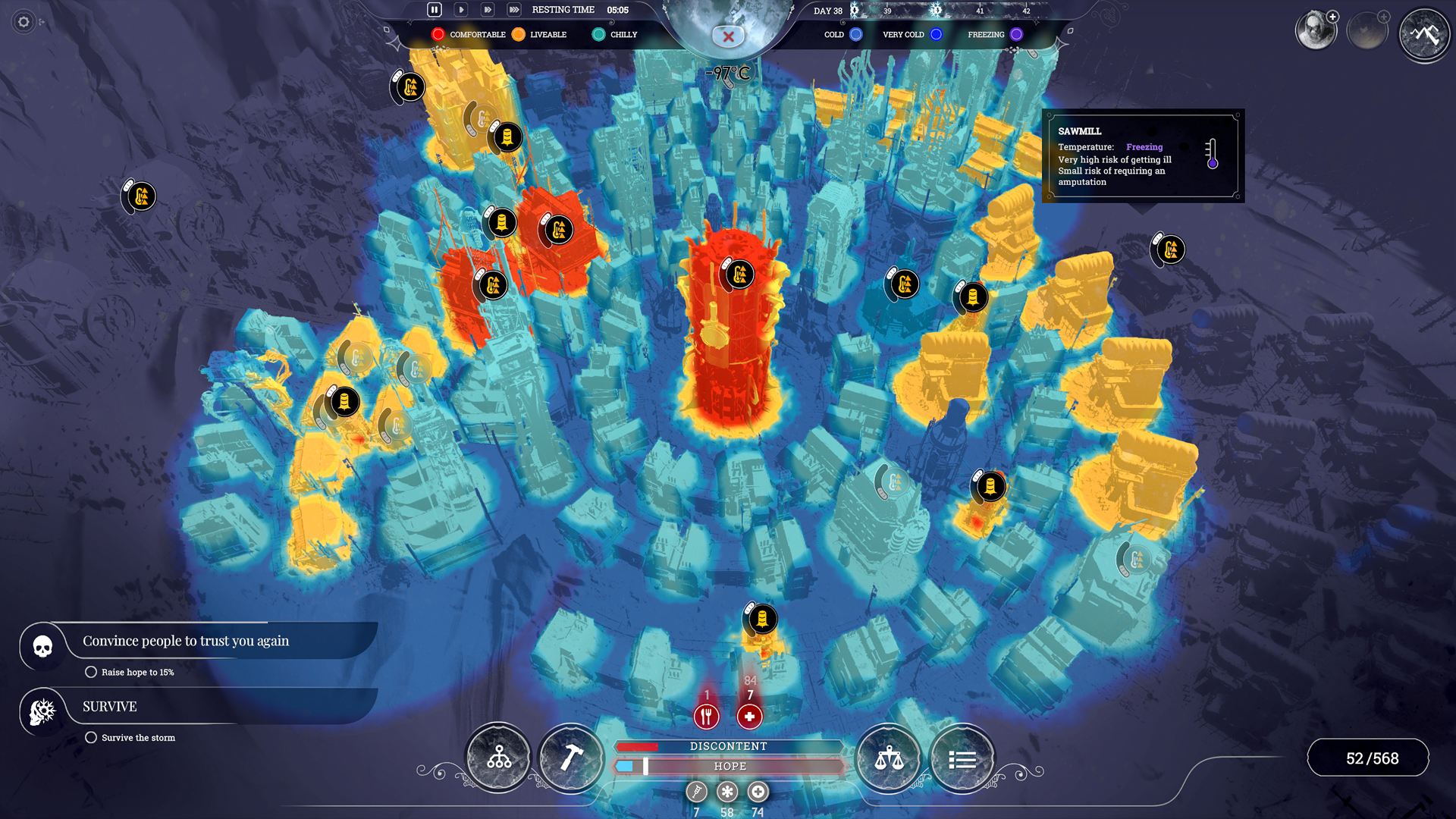 If you ignore the three different scenarios, the game doesn’t have missions like most games do. Each playthrough takes place in the same exact location, so in terms of objectives, the game feels a bit samey as it’s limited by nature. On the other hand, more often than not this side of the game serves as some sort of guidelines as to how you should evolve your city, but it also serves to link the game’s gameplay mechanics to the way the narrative is driven. If the game tasks you with building more hunting posts, you might find this to be rather uninspired, but when it links these things to previous decisions that you’ve made, everything seems to gain a whole new layer of complexity.

Like any individual that’s in charge of a city, you’ll be able to sign laws, choose the direction your society will take, and each law will affect your society in different ways. These decisions will heavily influence the way things unfold throughout each playthrough, as you try to balance both the city’s hope and discontent towards you. Laws pertaining to the survival of the group at the cost of some human decency will obviously cause discontent, but sometimes these will increase the people’s hope as they say that there’s a chance that tomorrow will be better than today. For instance, you might find yourself struggling, lacking human resources in order to efficiently sustain the city, and then you sign the law that puts into effect child labor, which makes people discontent towards you, but it gives them hope because you’re finally able to allocate your resources in a more proper manner in order to make sure that everyone is doing great. 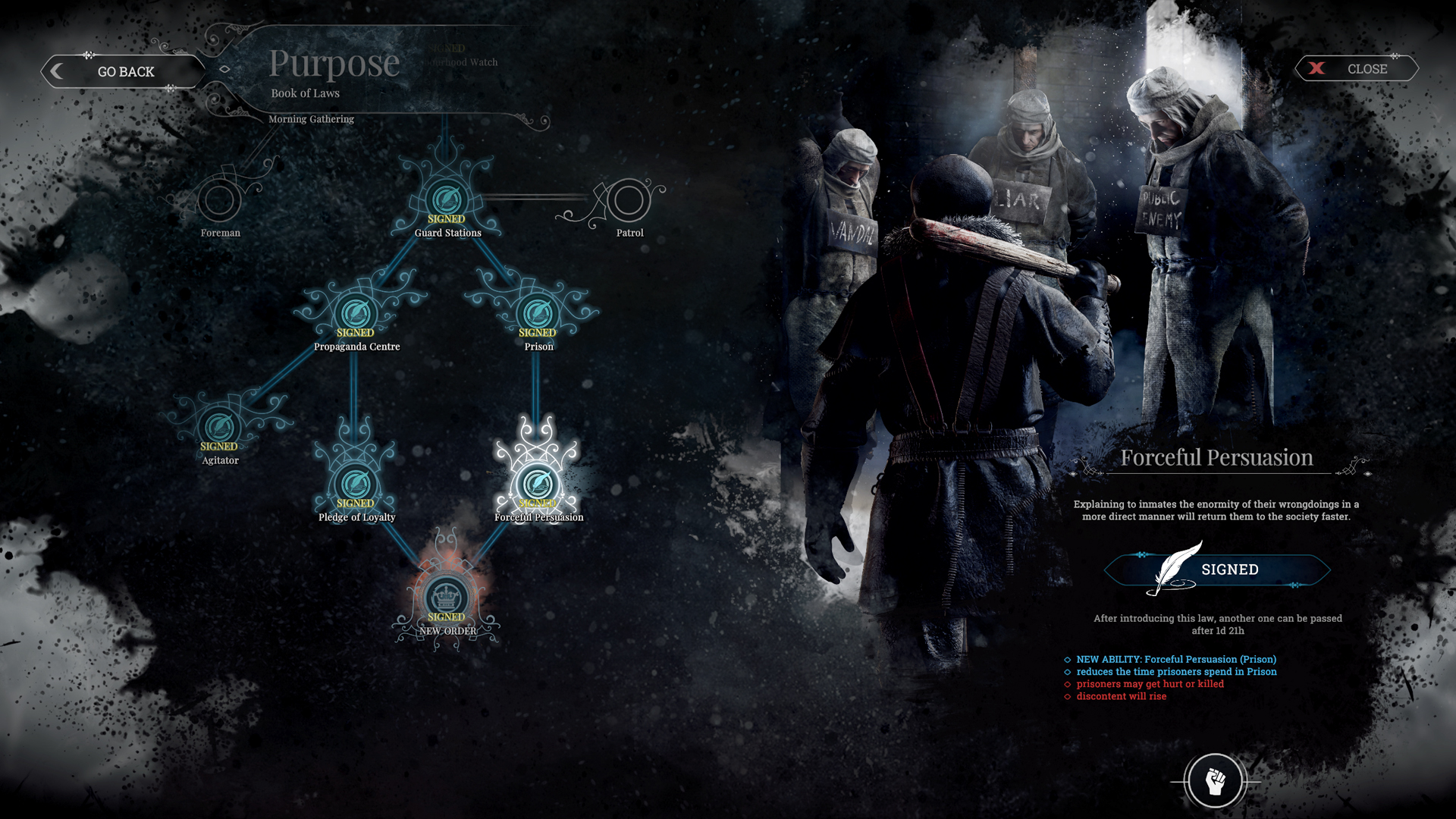 Every now and then events will appear in the form of some sort of problem that needs to be addressed within the city. It can be people complaining about the cold, the lack of space in infirmaries, and other issues related to the overall well-being of the populace. When faced with such occasions, you’re provided with a few options that you can take. You can promise to improve conditions or solve the problem that the people have presented you one way or another, and depending if you keep your promise or not, that will also affect the people’s sentiment towards you. Funnily enough, to my own demise, I promised more than I could realize on my first playthrough, and after a series of riots, I was banished from the city.

Besides the city building, the survival, and the political aspects of the game, there’s also a certain degree of exploration once you build a beacon and assemble a group of scouts. From this point forward, the map of the region opens itself to you, and you’re able to explore numerous locations that can contain resources, survivors, and even an automaton, these huge mechanical contraptions that can automate workplaces, thus replacing your worker’s shifts for always-on 24/7 production. You’ll also be able to set up outposts at certain locations, which will ensure a steady daily supply of a specific type of resource to the city. 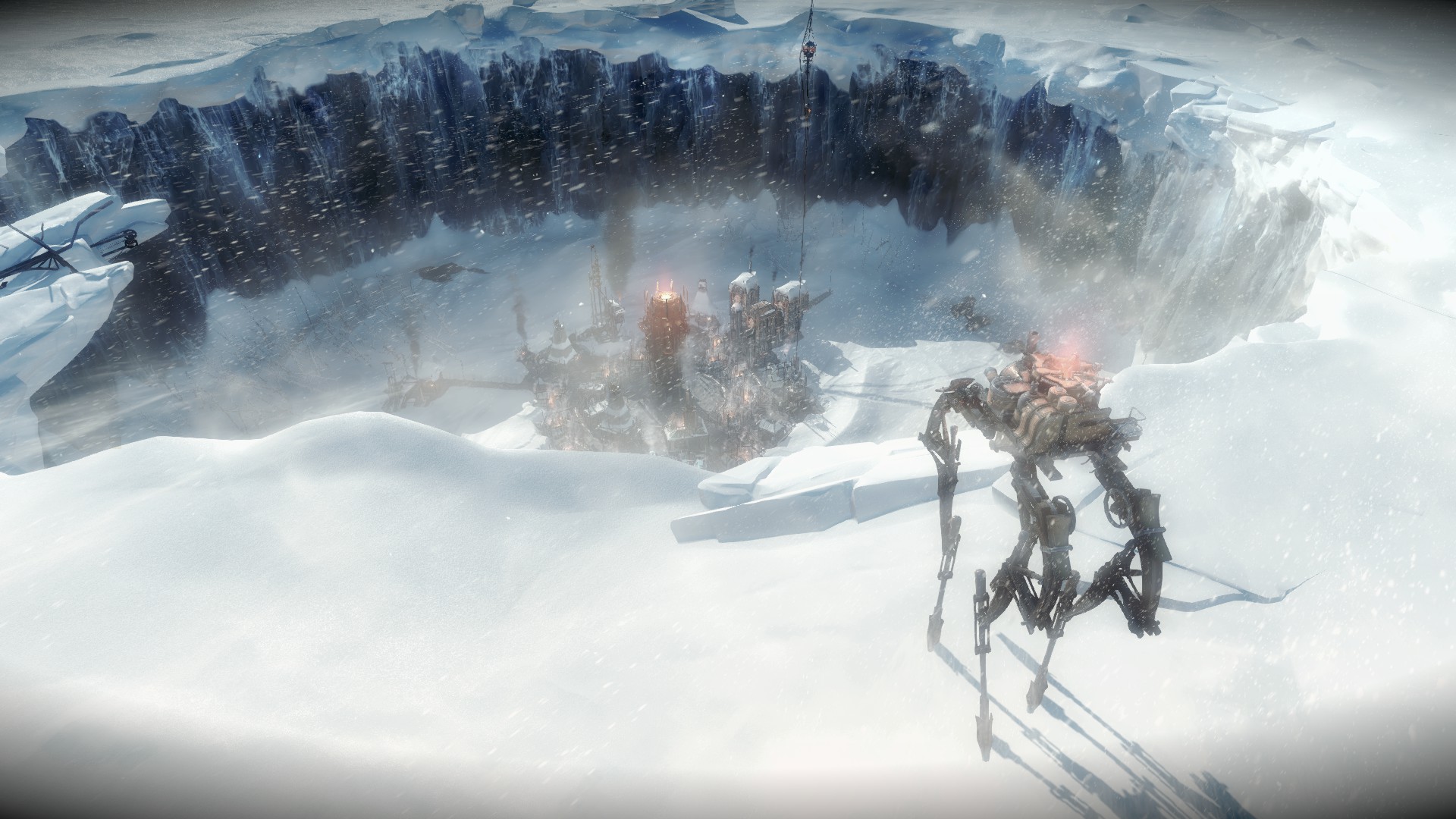 Despite all the great things that I’ve run across while playing the game, the truth is that the game also has its caveats. One of each is that sometimes when you try to save the game, the game can crash, which will make you lose your progress. Besides that, the lack of voice acting and a more personal touch to the game’s world feels like a missed opportunity to deliver a much more engaging and touching experience that would focus on a core group of characters instead of pretty much treating everyone in your city as a whole. There’s a point in the game where you can choose to take your politics in two different directions, one relying on faith, and the other relying on order. The former brings a new range of buildings and politics that will ensure that the people are kept in check, under the eye of the Church, while the other also opens up new things, but in a more despotic sense. Besides the obvious implications that this has on the gameplay and the way your city functions, I really wished there was something tied to these that created a new narrative inside the already existing one.

Now, it’s also worth noting that the game is quite the looker, but that seems to come at a rather hefty cost. Performance suffers quite a lot once you reach a certain point where you have multiple things going on on your city. However, thanks to the fast forward feature and the ability to pause at any time, it doesn’t really get in the way of the gameplay. I also feel like I have to mention the game’s music, which I’ve been listening to for the past few days since I’ve started playing the game. There are a couple of tracks that have really stuck with me, and while one of these can simply be listened to by just opening the game and staying in the main menu, there is another track that plays at a pivotal point in the campaign that really sets the perfect mood for what is happening. 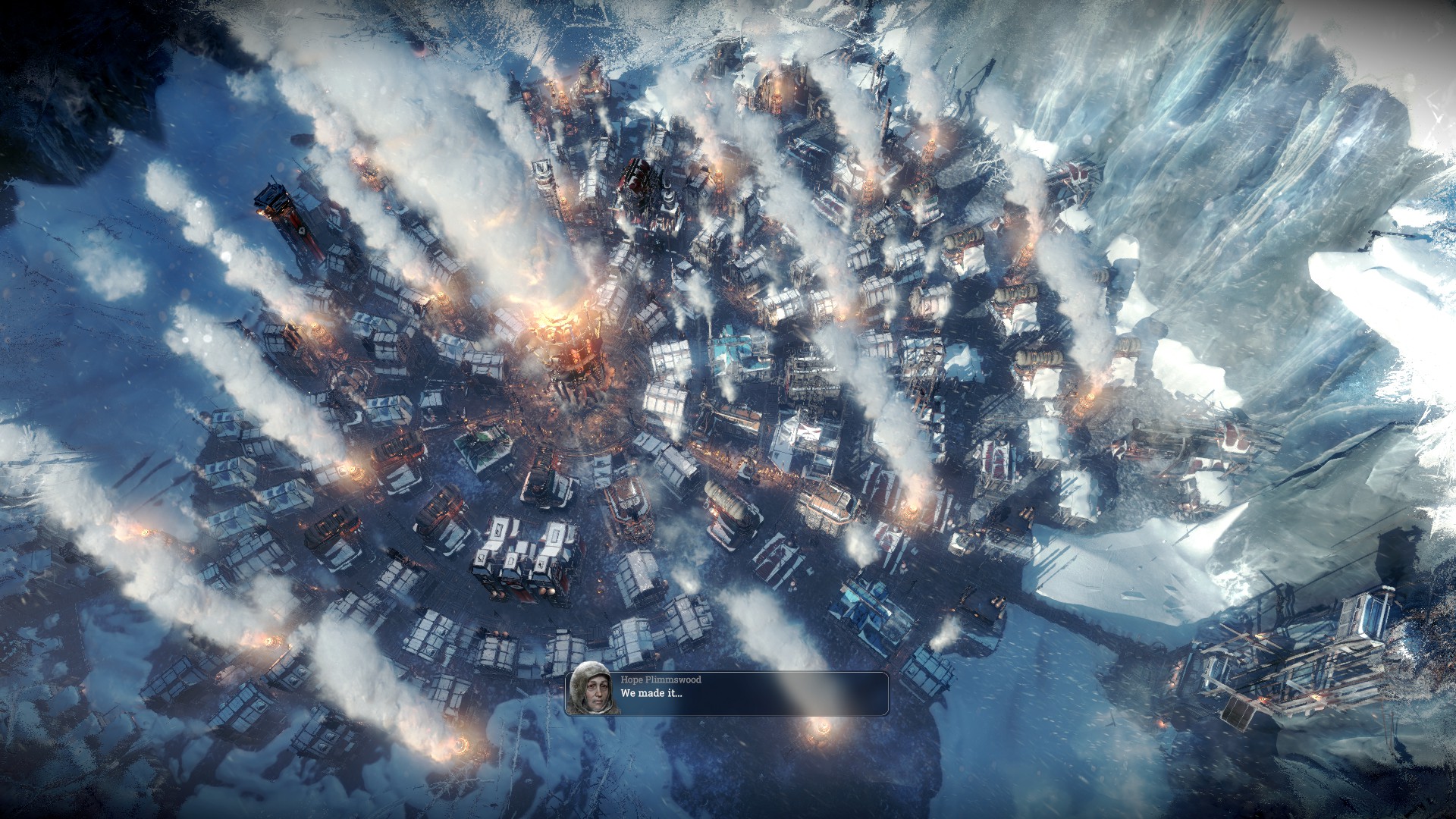 While I was initially going to give Frostpunk the ultimate Autosave rating, as I put more thought into it, I realized that while I enjoyed the game quite a lot, I don’t see myself replaying it. It’s missing that spark that some games have and which serves to attract countless other players. It’s a great game for me and many other people, but it certainly won’t be for everyone. As a mash-up of a survival and city management game, it’s quite good, and while the game’s setting is quite appealing, the narrative seems to leave quite a bit to be desired.

Nonetheless, the game should last you about 16 hours if you manage to beat everything on the first try, which I find to be more than reasonable given the game’s price tag and the fact that the developers are already working on new scenarios which will be free for everyone that owns the game. If you’re either into the management aspect of the game, or if you fancy becoming a despotic ruler by ruling with an iron fist, or if you want to show that even when confronted with the grimmest future that Humanity has ever faced, one has to do their best to retain their own humanity and decency, Frostpunk will surely be a game that you’ll have a good time with.