This 3D run-and-gun is a bit simplistic, but quite satisfying.

Roll out to Squash some ANTs

As I’ve mentioned before there aren’t that many games involving big robots on Steam. Since the review I said that in though, there have been a few more games that have you controlling mechs, most obviously Into the Breach. But while that game is strategy, Assault Gunners HD is pure action, and does a pretty good job of it. Originally a Vita game, it was also never localized, so this is the first time most western gamers will be able to play it.

Assault Gunners HD puts you in the role of an unnamed group of soldiers in DAT, a peace-keeping force set around Mars. Following a few training missions they suddenly receive a warning that they’ve lost contact with the surface, and soon discover that robots meant for terraforming the planet, ANTS, have run amock. You have to stop them with your own robots.

This is all delivered through some text dumps before every level, and some subtitled lines within them. It’s pretty obvious what the game’s primary goal is, and that’s letting you run amock in a big robot. Every level you’re dropped in with your three squad-mates and given some goal, be it capturing checkpoints or defending certain locations. Ultimately though it usually comes down to wiping everything out. 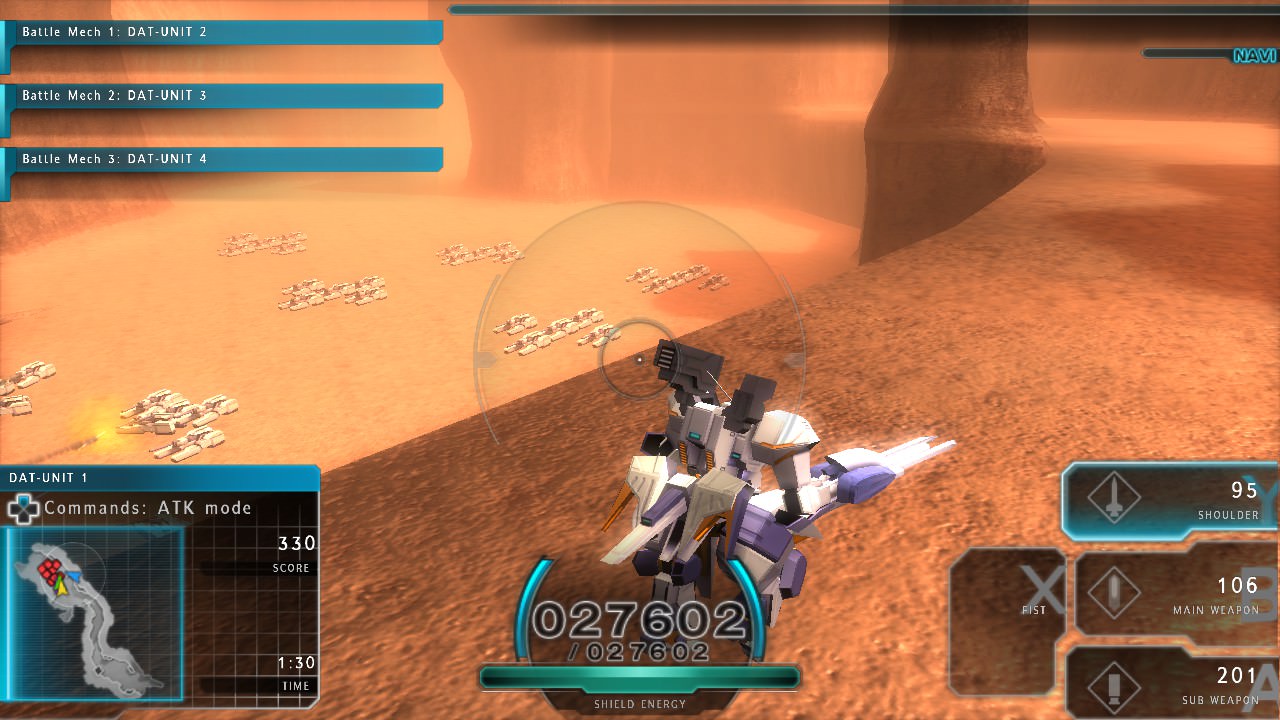 You have plenty of tools to do that with, ranging from a typical assault rifle to lasers, rocket pods and your machine’s fists. You scavenge all these at the end of every battle, so you can use what you like. The enemies die fairly quickly whatever you’re using, but there are always a ton of them in every level. It reminds me a lot of Dynasty Warriors, and while you can’t juggle a hundred of them I think there’s a similar appeal.

You also acquire blueprints after every battle that you can use to develop parts for your robots, specifically the chest and legs. They all have different stats, of course, and you can mix-and-match. The legs in particular have variants that are four-legged or even tank treads, giving some variety in what you can make your machine look like. However, the different blueprints do take points to unlock and that’s where I could see things getting a bit grindy if you wanted to get them all, as even the earliest ones I found were asking for quite a bit.

This customization also extends to your squadmates, who do fight alongside you in every level and could potentially lighten the load if you keep them upgraded. You can also change the personalities of their voice lines during gameplay, although unfortunately they aren’t subtitled or anything, meaning unless you’re bilingual they won’t be as memorable as your wingmen from Star Fox (though they do sometimes die just as fast). 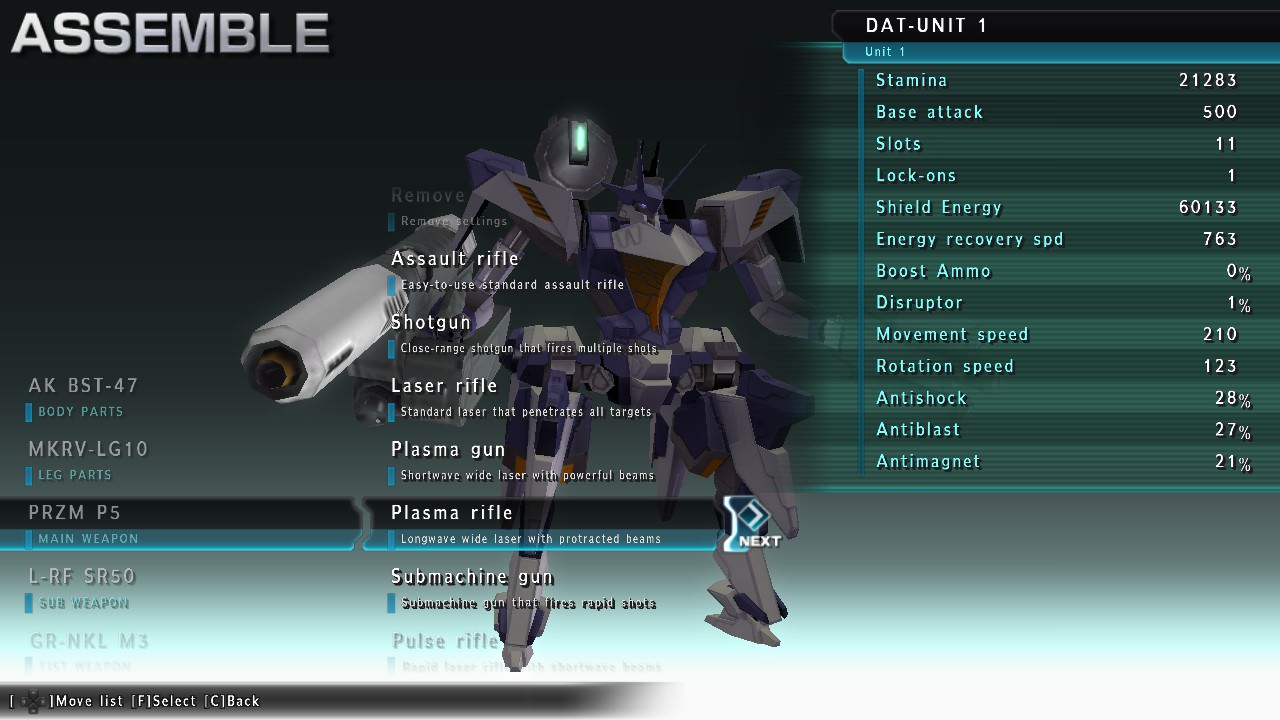 There are only twenty missions in the game which so far haven’t taken very long to complete, meaning you can get through the game in only a couple days if it grabs you. But there are also fifteen DLC missions packed in for some more play-time, as well as a horde mode you can see how long you survive in, which I imagine would be a good thing to try once you’ve upgraded all your stuff.

Graphically the game looks fine, everything is nicely distinct and you can identify enemies at a glance. The port also seems fine; I didn’t get any slow-down even when a lot of enemies were on screen, which I imagine wouldn’t have been the case on the Vita, but the controls are a bit wonky on keyboard, so you’ll probably want a controller. 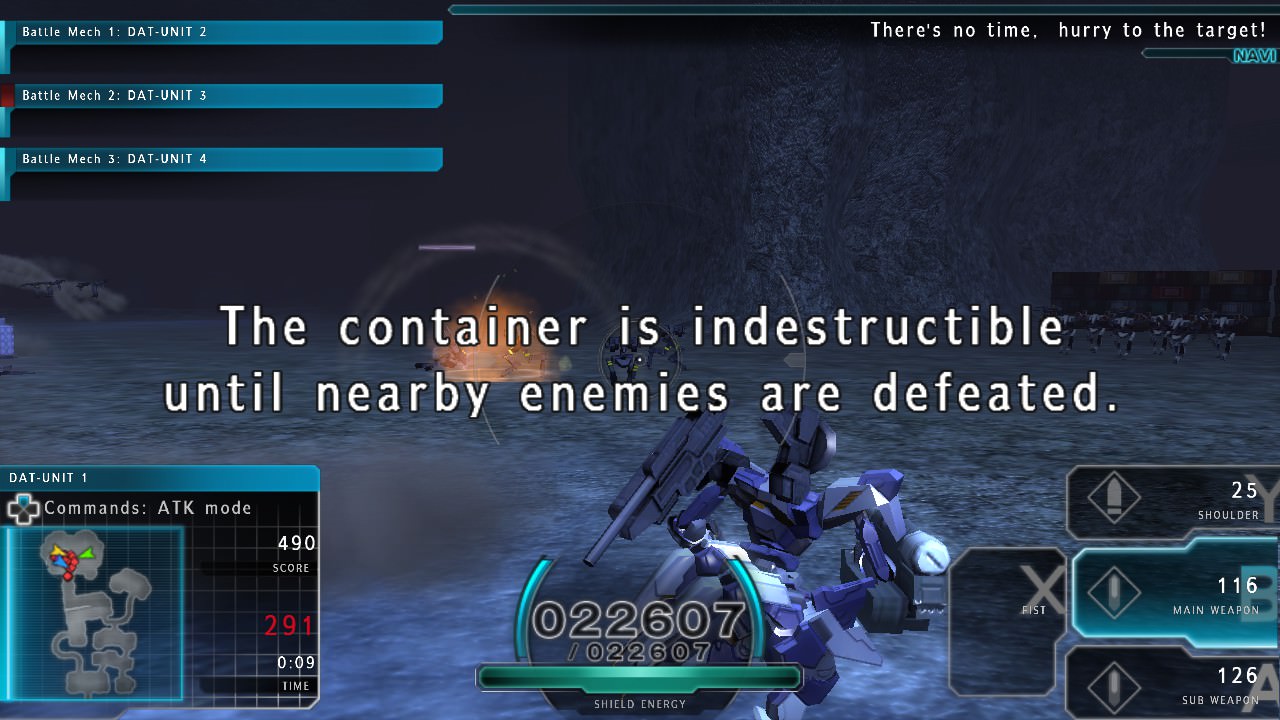 Overall while it isn’t going to set the world on fire, Assault Gunners HD is a fun action-filled romp that should appeal to fans of this kind of game. I give it a Save.