If it wasn’t already 35 years old, the Nobunaga’s Ambition series could be considered Japan’s answer to Shogun: Total War.

So I heard there’s a whole series?

The Nobunaga’s Ambition games hearken back to 1983, with 15 titles and loads of expansions released so far. They’re all grand strategy games set in the late 16th century, named after daimyō Oda Nobunaga‘s ambition to unify Japan. Sphere of Influence is the 14th title, and Sphere of Influence – Ascension (or Souzou Sengoku Risshiden in Japan) is its second expansion. The first is also sold on Steam. Compared to that, this game’s particular selling point is that you can start as any minor military commander and rise in power, not only lead a whole clan. In that capacity, your liege gives you regular tasks, like attacking an enemy castle or supplying needed resources.

The competition doesn’t sleep, either?

As far as video games go, it shares the setting with KOEI’s own Samurai Warriors and Capcom’s Sengoku Basara series (both Dynasty Warriors style crowd-fighting action games), and in addition to the historical setting it also shares the grand strategy genre with Creative Assembly’s Shogun: Total War games as well as Paradox Development Studio’s Europa Universalis spinoff Sengoku. In other words, games provide a lot of ways to get your Nobunaga on. Like in Total War, you can choose to play real-time battles, but whereas those are the real meat of Creative Assembly’s series and the world map is often merely tacked on, Nobunaga’s Ambition is the inverse, with a large focus on developing your territories, leveling your characters by making them oversee building projects, and sending your officers as diplomatic envoys. In fact, any action from assembling an army to upgrading the roads around your castles requires at least one of your realm’s characters, and provides them with experience points and thus potential stat growth. The prominence of these historical characters is similar to Sengoku‘s much more successful medieval brother, Crusader Kings II. 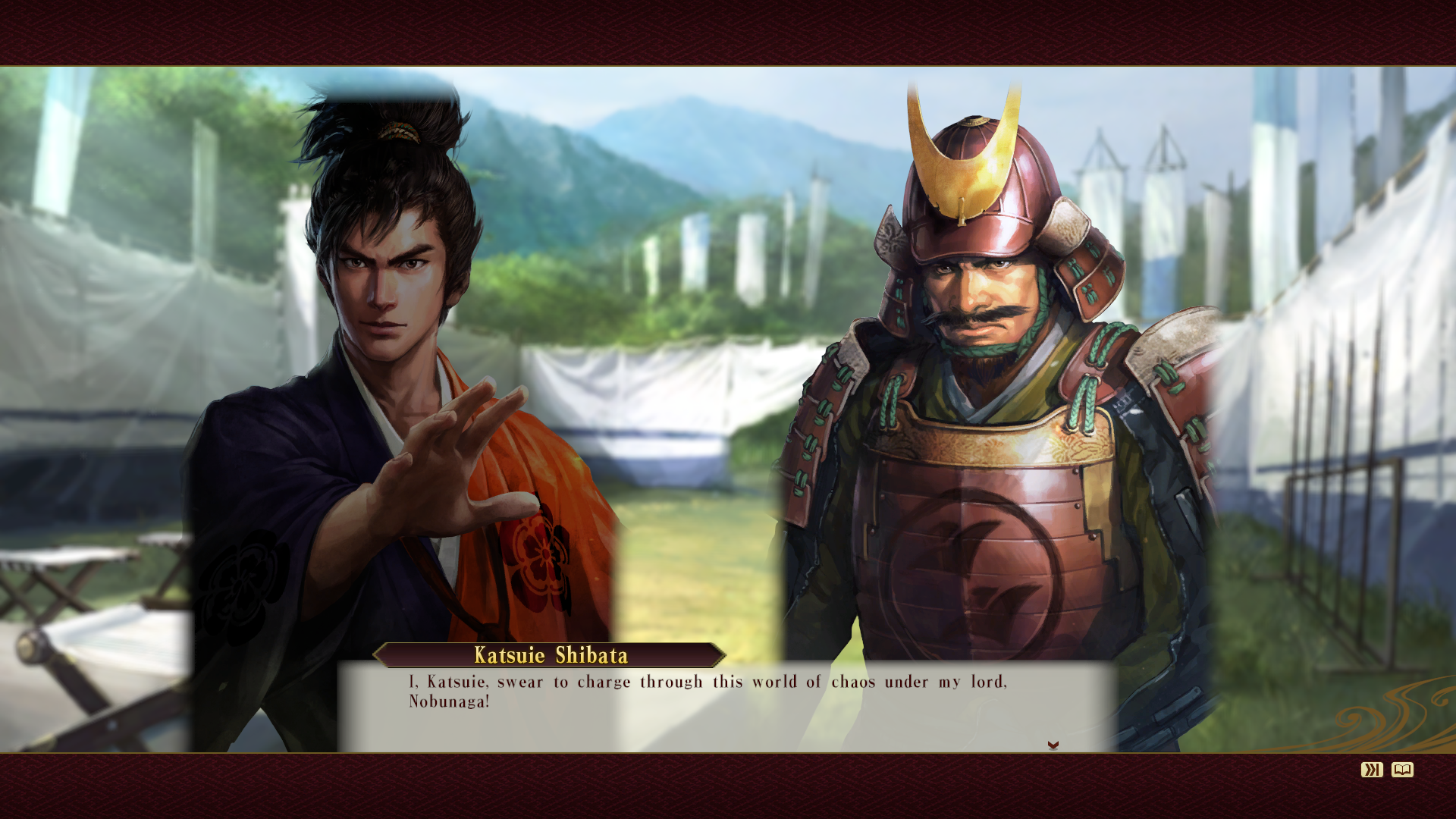 Whereas Paradox Development Studio firmly moved away from historical railroading towards sandbox strategy games in a historical setting, Nobunaga’s Ambition again does the opposite of Western grand strategy titles, and offers a staggering amount of history. Playing as one of the hundreds of available leaders, you are given historical quests to fulfill (until you fail one), and at the appropriate dates you get interrupted by short, kinetic novel style interludes showing you what happened in Japan. Whether it’s a lord being assassinated by his son or an alliance being formed to avoid a war, the 1534 to 1614 timeline covered by the game keeps coming up with something. For very special occasions, there even are around forty voiced cutscenes of approximately a minute each.

How do you play this?

The core decision-making happens in an orders phase at the start of every month (turn), as a council is convened and resources are allocated towards construction of castle upgrades, diplomatically influencing neighbouring lords or setting realm policies. These policies as well as all officers have their place on a scale from conservative Buddhism to Western / Christian progressiveness, which affects the sort of bonuses one can receive as well as the characters a lord gets along with. Retainers on the other end of the spectrum have to be bribed with expensive gifts and titles so that they don’t become unruly and defect.

Around your castles, you place structures that either contribute one of the game’s base resources or buff the production of surrounding facilities. Castle planning becomes a puzzly mini-game for the player to decide how to place their structures to obtain the most gold, materials and soldiers. The learning curve isn’t worse than any other grand strategy game and could even be friendlier to new players if not for the user interface often making it a bit harder than necessary to find the hard data required for a particular decision.

After locking in the instructions, the rest of the turn plays out in pausable real-time and interaction is limited to deploying armies, moving them to engage into battles and sieges, and optionally fighting those out as 3D battles. The basic siege system is very similar to Paradox games, with a base’s morale dropping over time until it surrenders, but there also being an option to assault the defenders at a high cost in lost lives. In addition, razing the local infrastructure notably harms the defenders’ supplies, but as a scorched-earth policy also makes for a less valuable captured castle in the end. 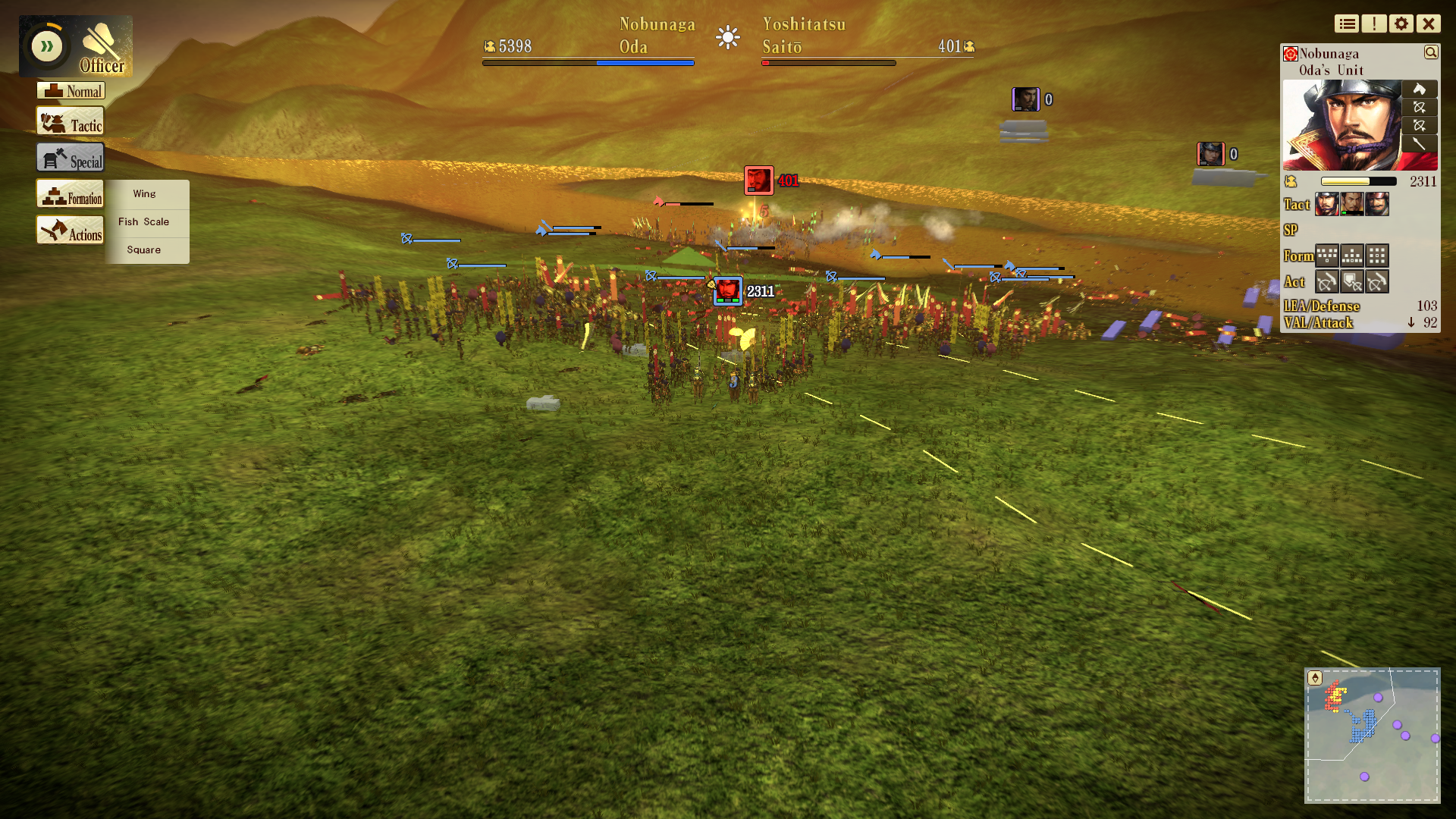 The Sphere of Influence – Ascension expansion adds naval and siege battles as well as different unit formations to be changed on the fly that affect how effective your various troop types are. The army unit of your player character can use temporary buffs, like increased ranged damage or strengthened defense against a melee charge, and your or your officers’ character traits can add their own combat bonuses. The combat system sure isn’t as exciting to watch as the trampling war elephants or fortification-smashing artillery found in Total War games, but at least the historical battles that occur are worth your while. For example, Nobunaga’s first astonishing military victory saw him ambush and kill the leader of a force that was ten times larger by sneaking through a forest during a storm. In the game, this is turned into a fight with limited line of sight where a small force has to be defeated before the overwhelming numbers of the enemy army make it back to their camp. Rushing into combat decisively and using the appropriate skills to reduce damage from the enemy attack volleys and infantry charges ends up crucial. 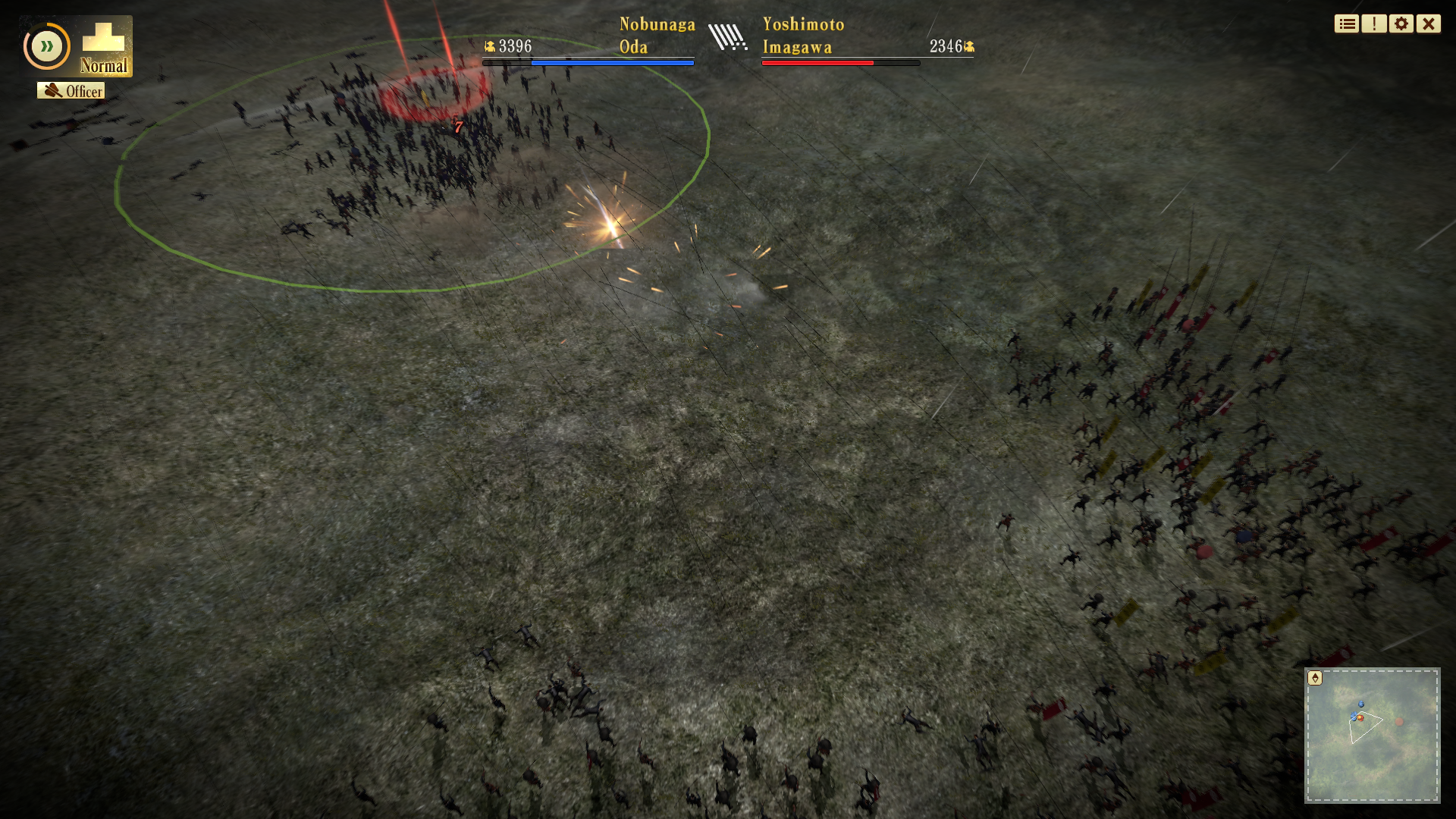 Steam features, are they in? Is there modding?

Whereas the previous edition already had Steam Cloud and Steam Trading Cards, Ascension adds Steam Achievements to the mix. Those seeking to efficiently ‘hundo’ the game will put in between fifty and a hundred hours before they unlock every last achievement.

The game offers a whole lot of gameplay and difficulty customization options, for an example whether your leaders will die of old age, and in addition it is possible to create and share officer characters as well as historical events. This is complimented by an extensive in-game editor that permits modifying the clans, castles and officers in mid-game. Using this built in cheat tool of course disables gaining further achievements from that save game. 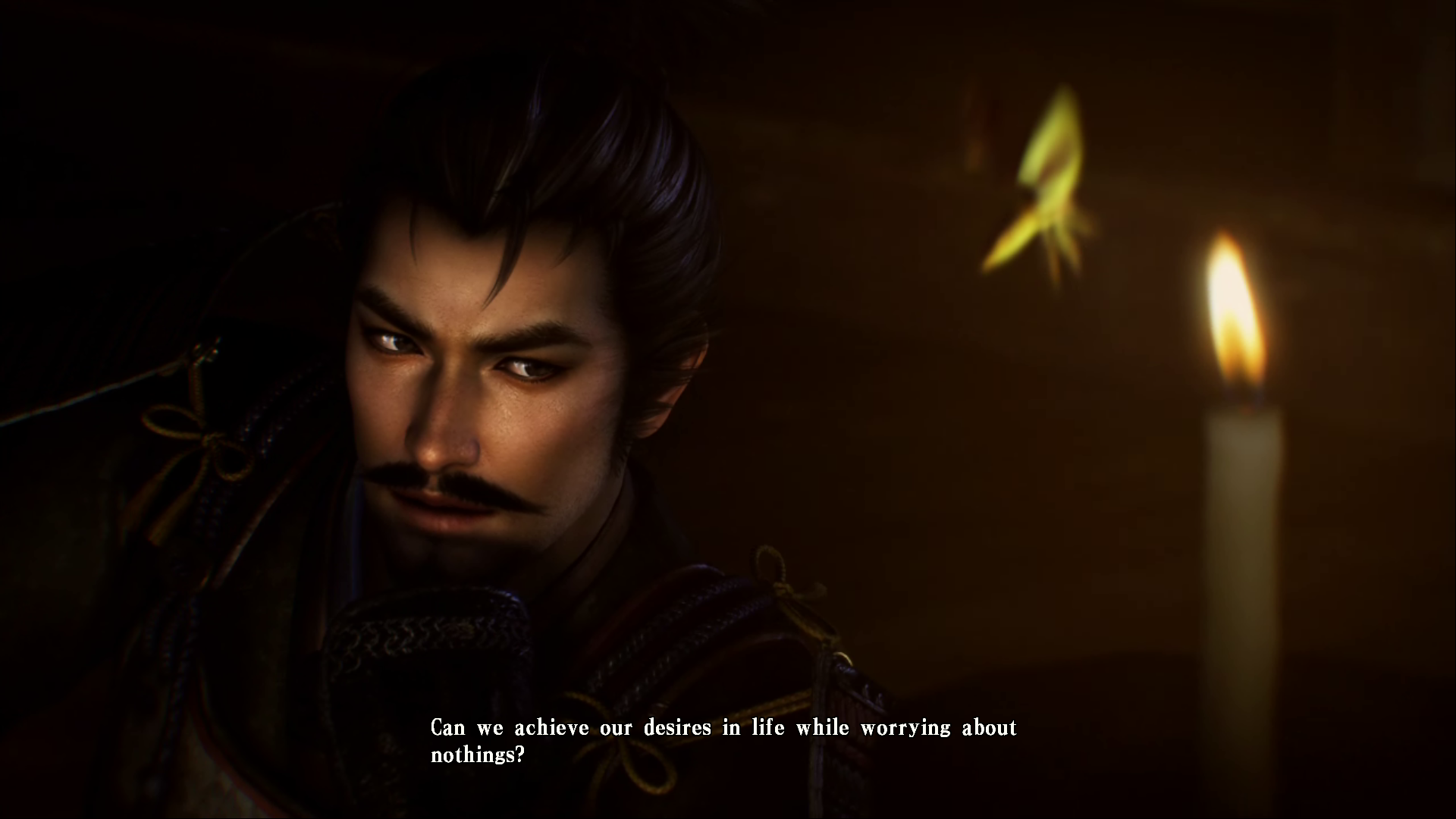 This fun romp through Sengoku Japan is prevented from attaining true greatness only thanks to mild interface clunkiness, some AI limitations when it comes to developing their domains, as well as a couple of unpatched bugs. Established or aspiring Japanese history buffs will take great delight in the painstaking detail put into the hundreds of lords and retainers, with their unique mini-biographies and other back story. Given an at least fleeting interest in the genre, it’s hard to go wrong with Nobunaga’s Ambition: Sphere of Influence – Ascension.

For players with little interest in Steam achievements, improved 3D battles and playing as officers, the ultimately more polished previous expansion is a fantastic choice.