Being a mobile port to begin with, Warhammer 40,000: Space Wolf does not deliver. The gameplay system involves a huge grind / pay wall and an overly simple strategic component. Unfortunately, it comes off as a mediocre title.

Warhammer 40,000: Space Wolf is a turn-based tactical card-based RPG, developed and published by Herocraft. In this game, you will impersonate Space Wolf squad leader Valgard and try to accomplish various missions for the glory of the Emperor, your Chapter and mostly to bring the forces of Chaos to a swift death. The game features deck building with a variety of equipment cards, skill progression of teammates, various types of armor to select, summonable additional companions, and crafting mechanics. 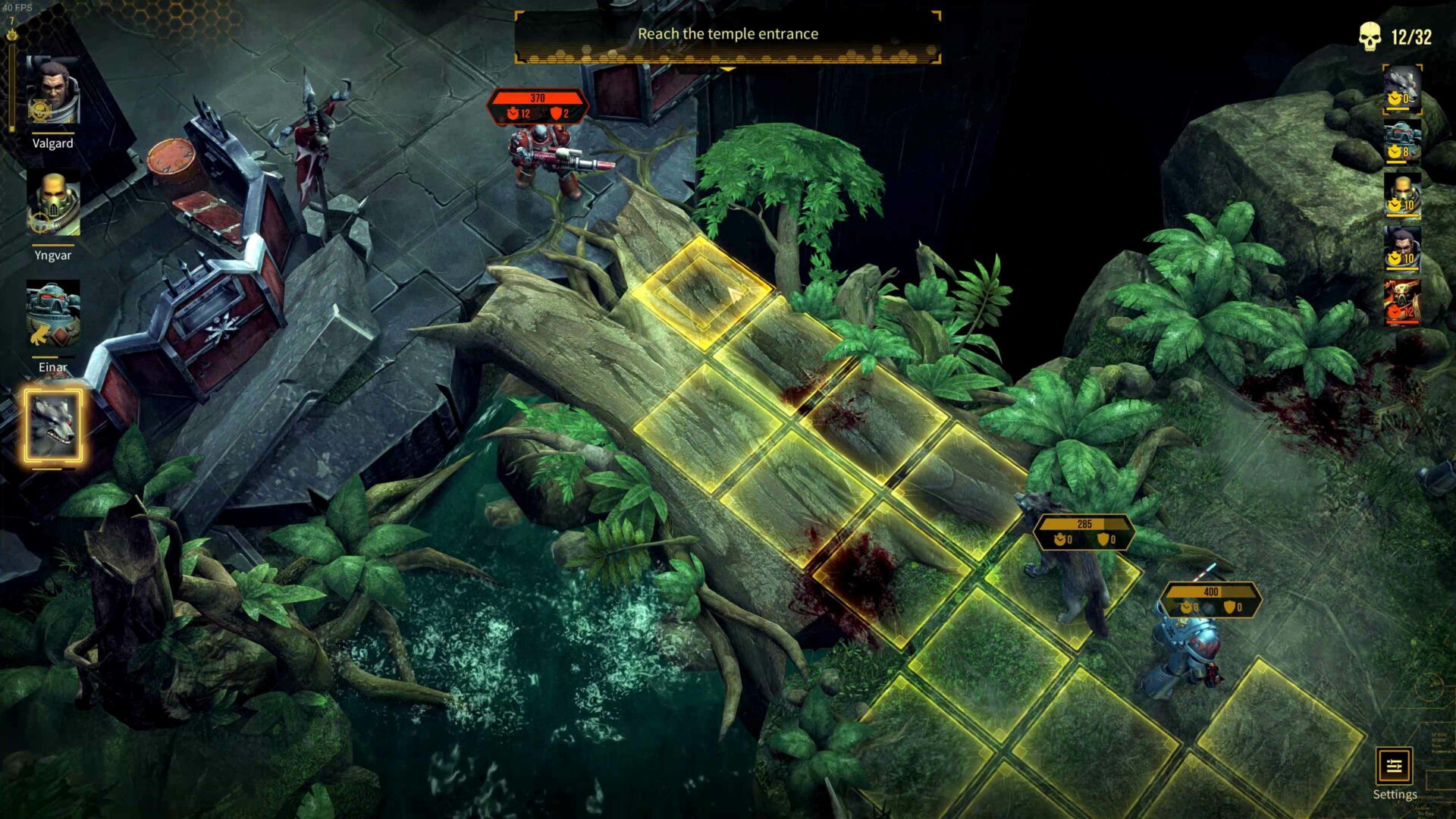 General Gameplay
The gameplay of Space Wolf is articulated in two sections: a management and a combat one. At your base, you will be able to manage your team, upgrade skills, and sort out Cards. The peculiarity of this turn-based game is its card-based structure where you and your companions all have a deck of 30 cards to choose from. You will be able to edit which cards go in each deck, and these are of various types and functions such as Movement, Weapons, Equipment or Skill. Cards have five rarity levels from Common to Legendary, and differences between rarity levels are marked with greatly augmented power and secondary effects. Building a balanced deck with the right amount of all the card types is essential. You have 3 decks to build, one for each type of Armor, which are Terminator, Power Armor and Scout Armor, each of these will have unique class-restricted weapons and skills available only to that specific Armor Set.

Cards of the same type and level can be fused together to get a higher level card, which will be of the same Rarity but a little bit better in statistics, such as more accuracy, damage, or healing, for example. Cards can be obtained by crafting them with Metal Scaps, obtainable in missions or by converting some unwanted cards into scrap, or with Booster Packs, obtained from Challenges or by spending a large sum of Scrap. Crafting will give you a random card of random rarity, however more expensive crafting types can lead to better chances of higher rarity cards.

How does this reflect in game? You can hold six cards in your hand at any time and cards are drawn randomly each turn when you have less than six, and are used up when activated. If they are Equipment, they stay in the specific Equipment slot for as long as you wish in the match.  Cards also have a Chain mechanic, it means that each card has a secondary effect (most of them) that activates when specific conditions are met, to increase its potential.

Explained like this, the system sounds even good and fair, and that is also what I thought in the first few missions.  After advancing a bit more I realized the truth, which I will explain in the follwing sections.

Combat System
Combat is turn based, each character normally has two action points to spend in either Movement or Card Use. Each card has a set Fatigue rating, which acts like Initiative in this game. The higher Fatigue you get in a turn from the cards you use, the longer it will take for you to get the next turn. Basically the more you do in one turn, the longer it takes to recuperate the fatigue.

The system here is pretty simple, there is no cover system or positioning bonuses.  You only have Armor to deflect a part of the incoming damage for a single attack, so each attack you get will remove 1 Armor if you have any, with a great damage reduction. There are neither bonuses for flanking or back attacks, nor Critical hits! Accuracy also is not character based but card-based, this means each card has a set % of hitting enemies and it does not depend on your character, obviously more rare cards will have better accuracy and also damage and effects, while low tier ones will have mediocre effects.

As you progress, the combat becomes involved with microtransactions and the mobile-game nature of Space Wolf stands out.  How, you may ask? Well, let me explain. After some missions, you will start to encounter large groups of enemies with good weapons and skills, and that is nothing wrong. What is wrong is that while you are tied to chance because you need to draw cards from a deck at random, and therefore you cannot know what card you are getting next turn, the enemies do not have decks, each enemy has a set weapon and skill roster and will always have that each single turn, meaning they are not tied by luck but have certain “cards” every turn. You may lose a companion because you did not get medkits that turn from the deck, but the enemy will always have Healing skills if its type has them. In some missions you will meet very large groups of enemies giving massive Area Buffs and Area Healing each turn, while you cannot do that because cards are consumed and randomly drawn each turn.

This, and this mechanic alone, completely renders the combat unfair. Enemies may have lower damage and HP than your three space marines, but they more than compensate by not having to rely on luck to get the right cards at the right time. An enemy has a powerful Plasma Gun? Well he can use it every turn while you have a Legendary Bolter? Oh, after two turns you need to throw it away because it expired. If this makes sense to you, well congratulations, because for me it doesn’t make any. It is like in XCOM you got random weapons and skills every turn while enemies have fixed ones. How could you elaborate a strategy? Well you can’t!

Of course Legendary and high grade cards have mostly Armor Ignore and very high damage, perfect for situations like those i described above… this is all to convenient for the coffers of Herocraft, isn’t it? Mobile microtransactions at their finest.

Content
The game is pretty long, especially since you need to grind for ridiculous amounts of time, or pay cash, to get any good decks and actually have a chance against enemies in further missions. The longevity is not in the content per se but is in the huge grind necessary to get further, by repeating the same missions you actually can win over and over in order to craft more good cards and be able to progress. 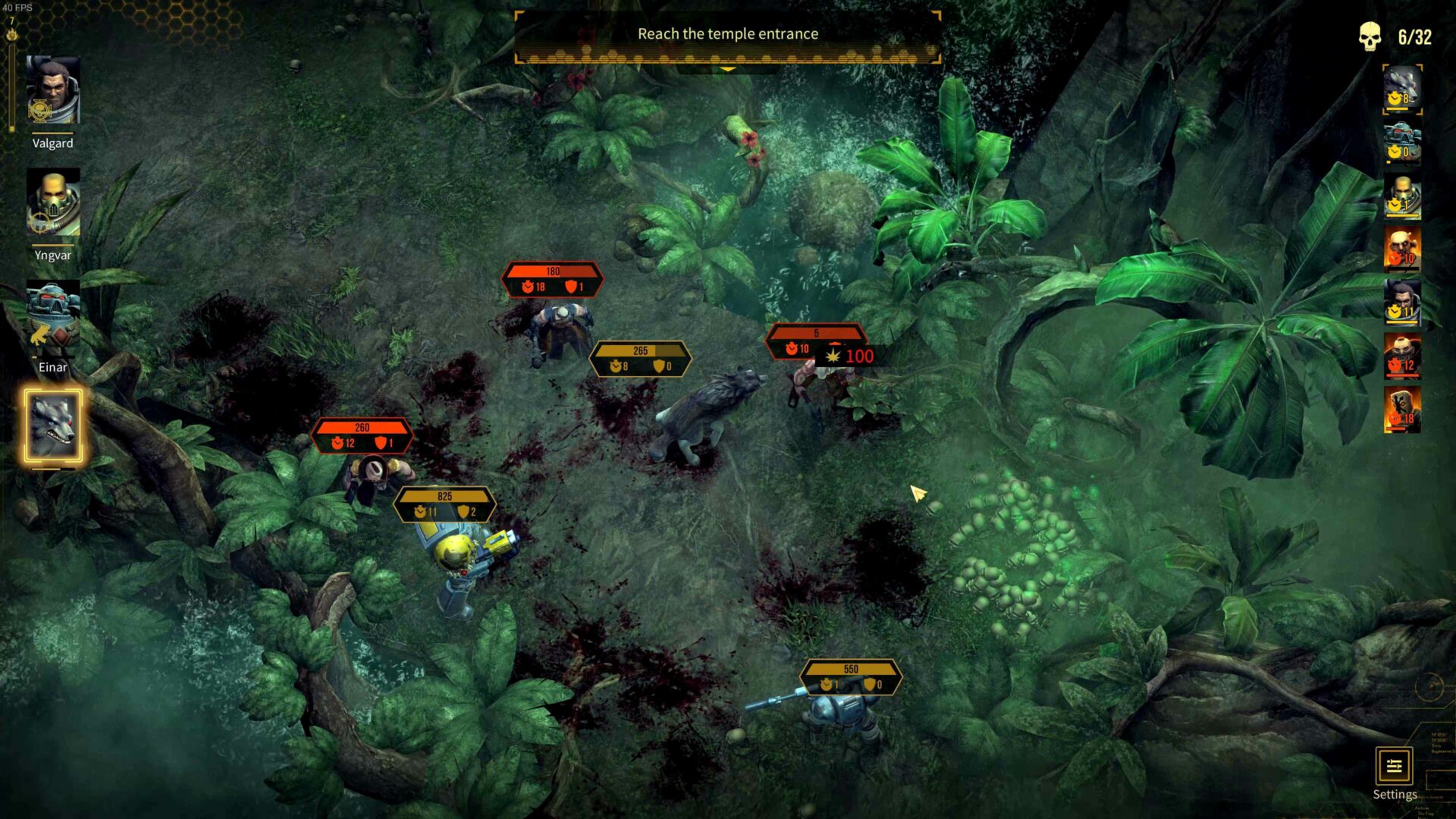 Graphics
The graphic presentation is very mediocre and not up to standards. Being a mobile port this is not a surprise. At least the art style, color palette, and the nicely rendered card art is quite faithful to the warhammer universe. There are low polygon models and textures, basic lighting and meshes, zero environment interaction, and the spaces marines look like they are made of plastic.

Sound
Here, the sound is mediocre at best. The voice acting is ridiculous as if coming from a B movie and the sound effects are not very good with power hammer hits sounding like a wet rag on a pavemented floor.

Performance
Given the graphics, it could probably run on a Commodore Amiga, but instead when certain camera animations are performed, the framerate inexplicably drops. Other than this, no major issues.

Stability
No major issues to report.

AI
Enemy Ai will always target the ally with less HP and less armor, a concentrated fire that gives little hope of survival to any single member for very long.

Quality of Life
Menus and UI are quite decent for a mobile port, nothing too bad to say on this. 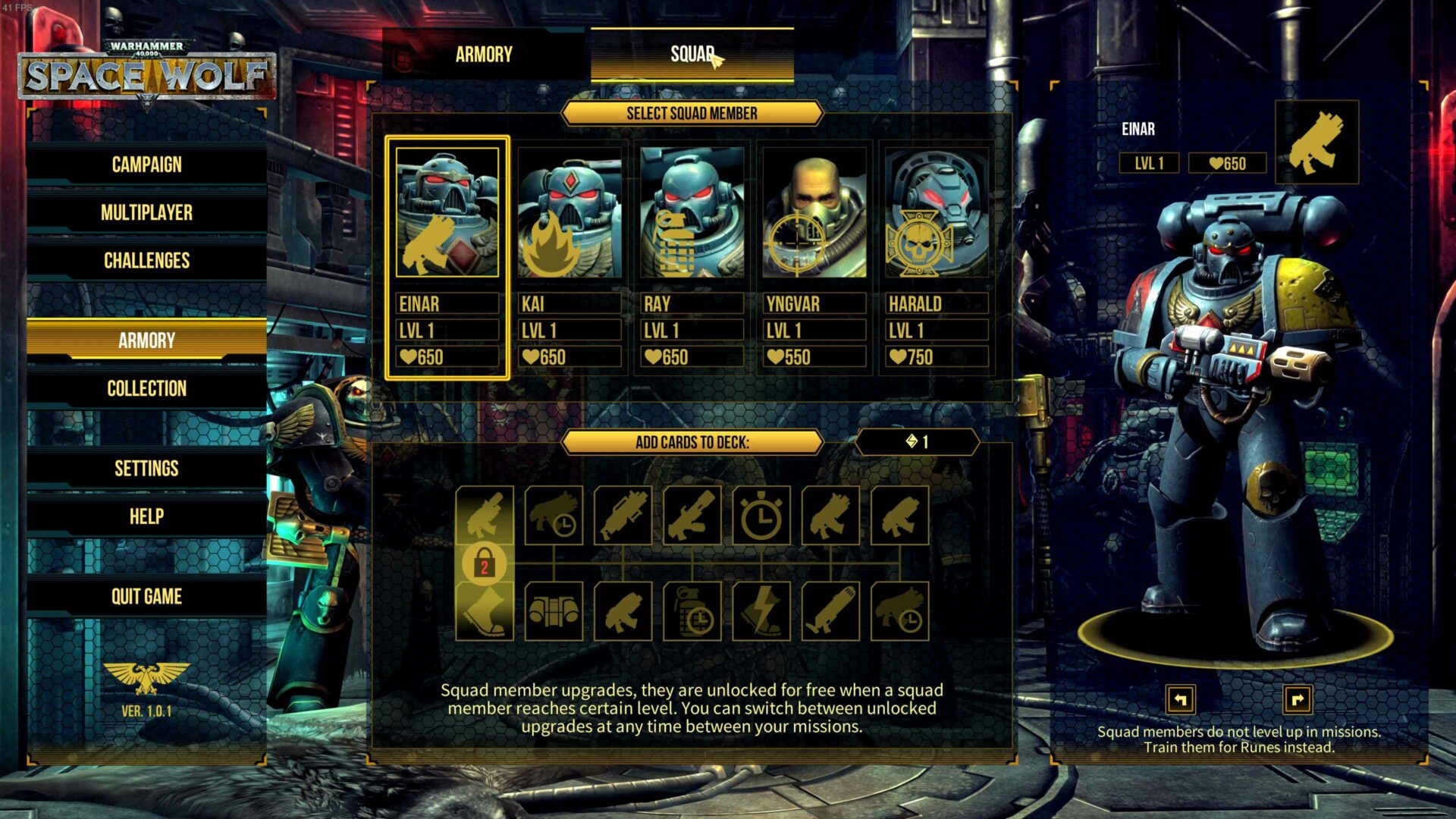 This mobile port which utilizes a simplistic strategy turn-based game is has a very strange combat / gear system put in place to create huge grind / paywalls beyond a few hours of gameplay. Unless you enjoy this type of tedium or don’t mind paying to avoid the grind, my advice is to look for a different Warhammer experience.