Starway Fleet is a rather simplistic but quite well-done space dogfighting game for both regular and VR setups, where the player becomes a space fighter pilot and is tasked with a series of missions, often involving convoy escort, spaceship destruction or objective defense.

Starway Fleet is a rather simplistic but quite well-done space dogfighting game for both regular and VR setups, where the player becomes a space fighter pilot and is tasked with a series of missions, often involving convoy escort, spaceship destruction or objective defense.

The gameplay of SF is the one you would expect from a standard dogfighting game, with the addition of capital ships as enemies, which is not usually present in games like this but is not an unknown feature either. You will start each mission from space or from your carrier flagship, and be catapulted straight away into the action, tasked with completing a different task every time. Often allied capital ships and fighters will be with you to support, but you have no direct control over them.

Missions are basically of two types: defense and assault. In the first type, you are tasked with defending a space station, allied ship or specific place, while in the second you will be tasked with destroying something, usually a ship or a structure. Variety in missions is not great, as after having played and completed all missions, these are the only two types of objectives encountered. 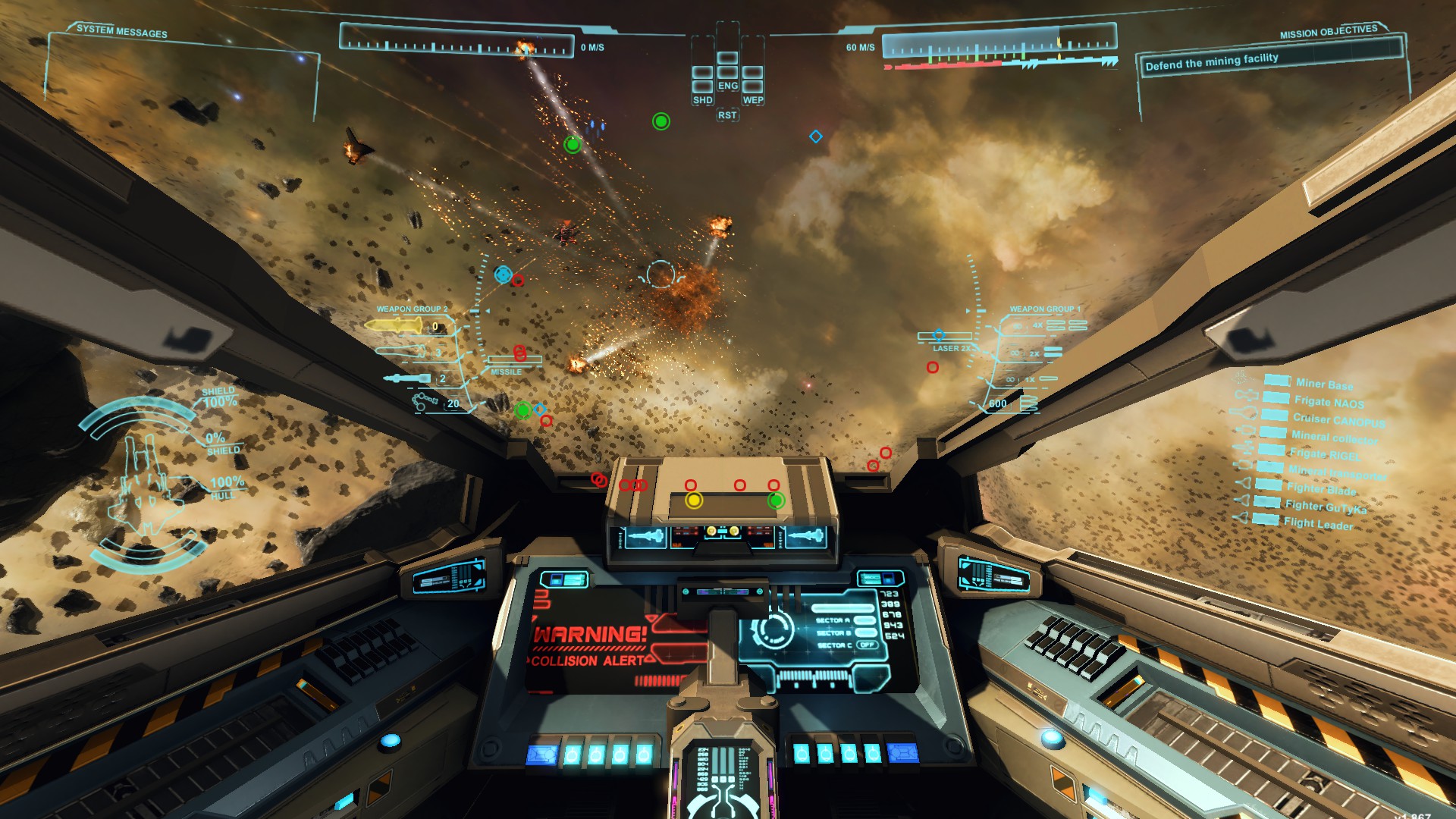 Combat is rather slow paced for a game of this type: enemy fighters and capital ships will not react and act as fast as you would expect compared to other similar titles, this is, however, a possible game design choice because of the standard and VR compatibility of this game, else VR players would have a hard time if the gameplay was too fast, this is possible but unconfirmed.

You will have a very limited set of armaments at your disposal: a laser gun with 3 different fire modes, a 20mm chaingun which is honestly useless, and 2 types of missiles: seekers and torpedoes, used against fighters and ships alike. There also are other slots for missiles but the game never explains how to equip or obtain them, and they are never provided in any mission, so they remain a mystery, possibly an unfinished feature.

In combat, there is also there the possibility of reallocating energy to Shields, Weapons or Engines, to get better performance in one of these when needed, but at the cost of worse performance in the other areas from where energy is drawn. Your fighter will have two shield layers, when one is depleted the other is engaged, and when both are down, the hull will be the only defense left, and after that well, kaboom!

While fighters are rather simple to destroy with a few well-placed shots, capital ships are much tougher and will require destroying blue cylinders, which are shield generators, to expose the hull and destroy them. This last procedure can be easy when one knows all the locations of generators by heart after fighting many ships, but at the beginning, none of the generator locations are indicated, so prepare to fail multiple missions to learn the locations of generators, and so destroy ships in time before the mission fails. This will happen and is a rather annoying game design choice. 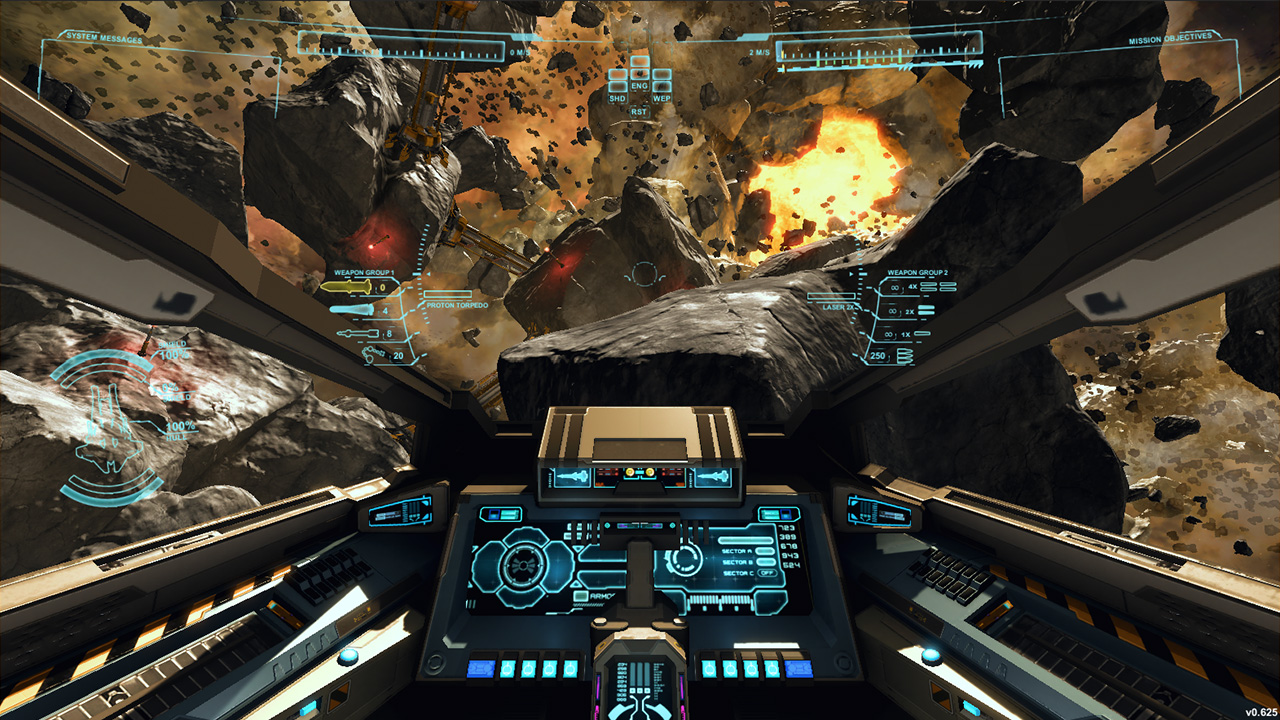 It took on average difficulty 3 hours to complete the whole campaign, and apart from Custom and Survival modes, which add little to the gameplay, maybe 2 hours or 3, the longevity and content amount is not very good. There are no additional fighters or weapons to unlock, no secret missions, or optional modes, excluding wave survival.

Ultimately it is all up on how fast you do things. The faster you destroy enemies, the less damage they will do to defense objectives, so that is the key to winning most missions. Enemy fighters are dull and slow, posing no threat whatsoever, and your allied ones are the same. Capital ships are big and tough, but their turrets are slow and inaccurate, once disarmed of their point defense, they are too easy to take down. Overall, it is not a particularly well-balanced game as the player is a bit too OP if we consider average difficulty.

The challenge is low, apart from one mission of the campaign which is insane not because of difficulty itself but because of the timing required in destroying certain ships. 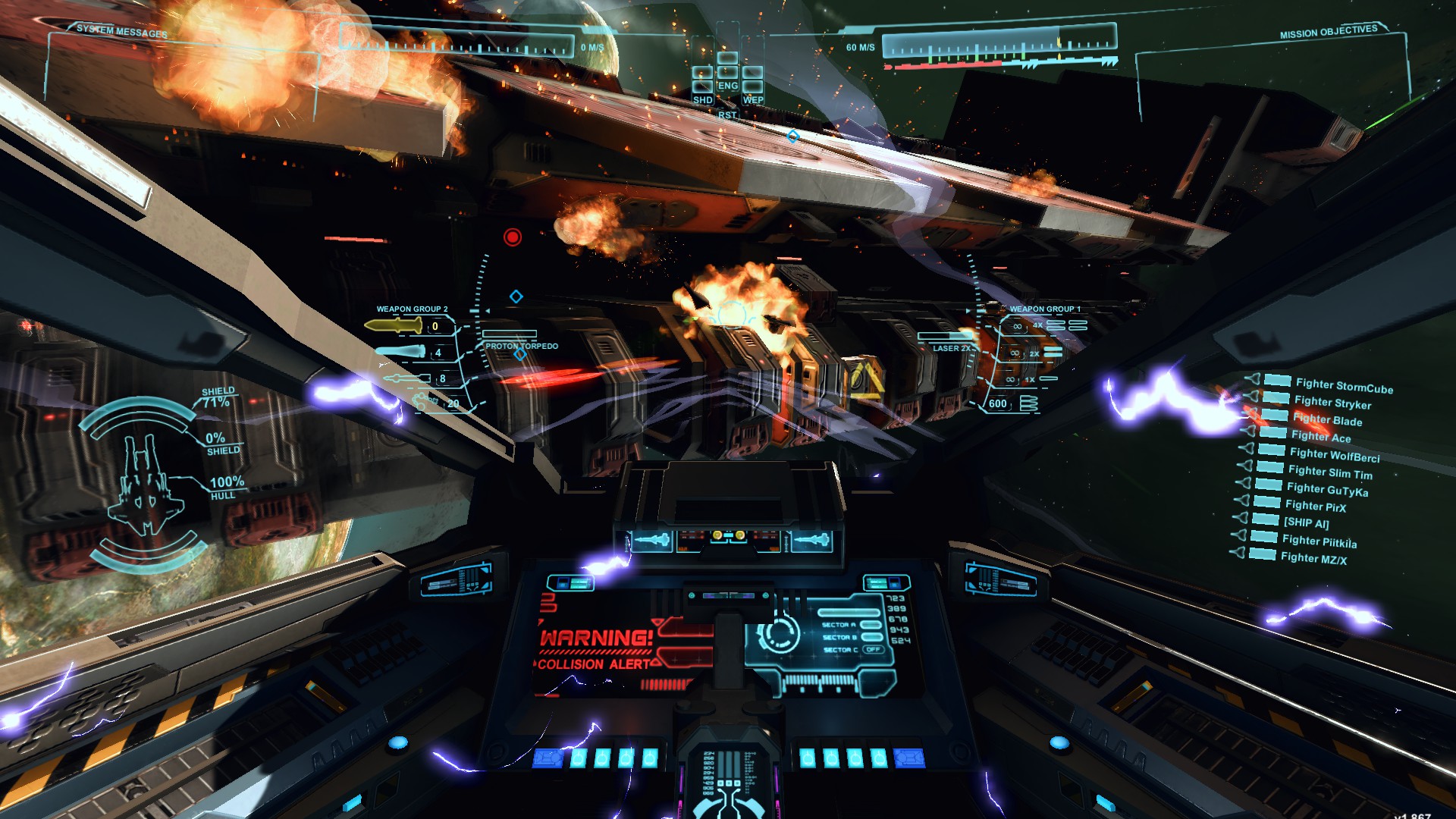 The lighting effects are ok, particles are rather low quality, models are quite detailed especially capital ship ones, but fighters could use a bit more detail. Textures are of an acceptable quality, but nothing eye-popping. Here, the graphics are sufficient, but nothing more than that for a 2017 game.

Voice acting is good and helps feeling involved in the action, I liked it. Sound effects and soundtracks are alright, but nothing special. 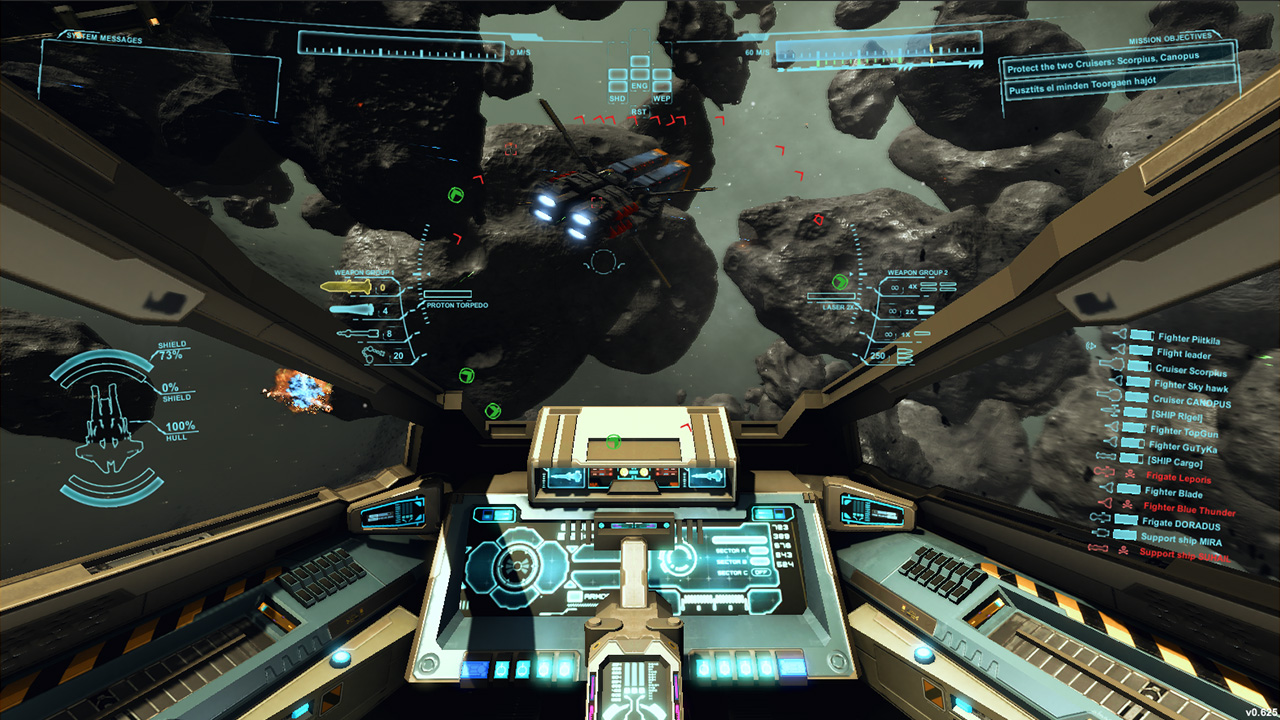 Allied and enemy AIs are terrible and useless, very lacking on this part, simple behavior patterns of attack and go around to make another attack run, no attack tactics or support to allies, very basic.

Considering it is a both VR and standard control scheme game, controls are decent enough, there are no issues with those. Menus and UI are good.

Sometimes allied fighters will get stuck inside enemy ships and just stand there. Other than this, no other bugs seen around.

The game doesn’t rewrite the genre, but if you are looking for an easy to play dogfighting game, then this will do just fine.  It’s almost a casual game to play.  For more experienced players, I suggest something more difficult. 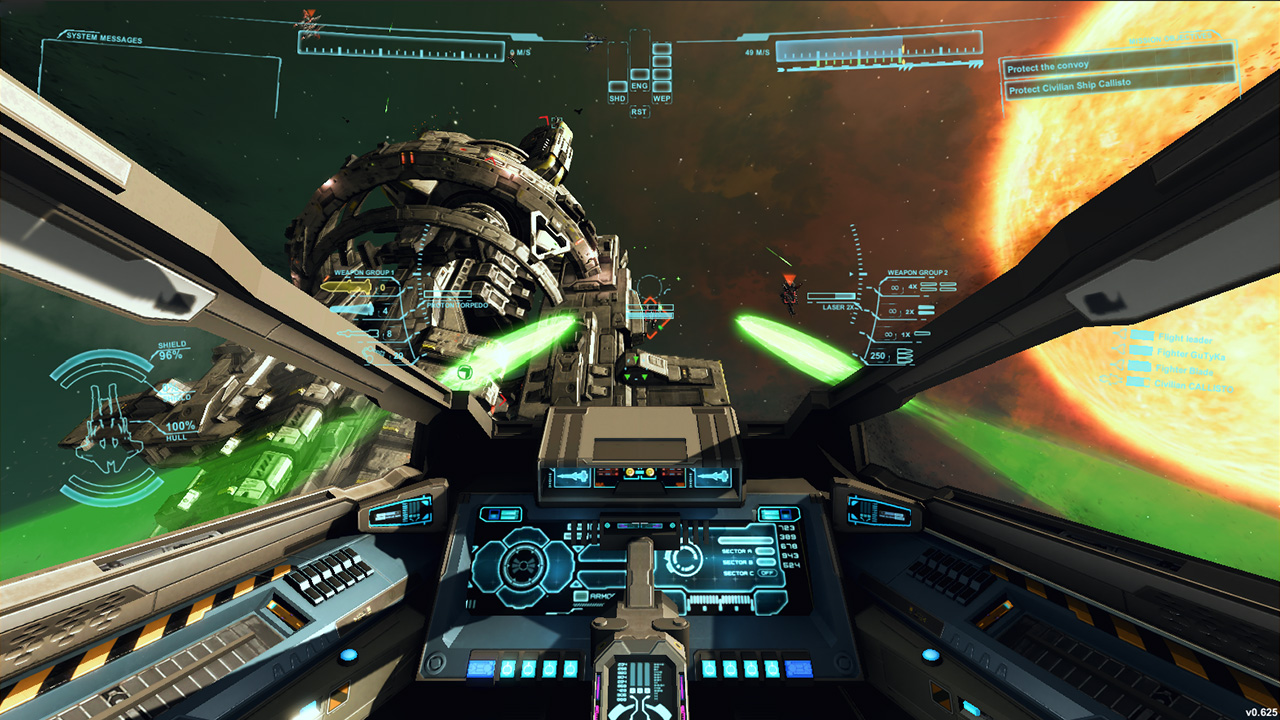