Sky Knights is an atypical and fresh MOBA-style pvp focused game with a good combat system and fast-paced battles. However, balancing problems and a lack of content prevent it from becoming a great title, for now at least.

Sky Knights is a pvp-oriented 4v4 MOBA featuring war planes facing each other, defending their bases as well as attacking enemy ones, and utilizing ground unit support in conjunction with fixed artillery positions. The gameplay is rather simple if compared to other titles of this kind.  Currently, there are a restricted number of upgrades and skills with which you can enhance your vehicle during the match. There are generally just three plane classes, making your choices limited. The PVP gameplay looks solid and stable even now during its EA period.  There are some dents to rework, but this is definitely a game to put on your watchlist if you love the sub-genre.

Sky Knights plays out as any moba does: there are two teams composed of four players, each has three FOBs, Forward Operating Bases, which they have to protect. FOBs are also defended by fixed anti-air cannons, which act as Towers and can be destroyed by players and ground units (Creeps) alike. The first team to take out all three enemy FOB’s will win the game.

There are 3 classes of planes currently available: Air Superiority, designed to bring down other aircraft and equipped with the best PvP gear, it is made specifically to destroy enemy fighters and ground strike planes. Then we have the Fighter-Bomber, which is mid-class and decent at dogfighting and ground attacks but is not particularly great at either, it comes off as a bit of a jack of all trades with both bombs and missiles for planes. Last but not least there is the Ground Strike plane, designed to destroy ground targets such as Towers, vehicles, and FOBs, it comes equipped with anti-tank missiles which can one-shot any ground unit.  It has an autocannon to inflict pain to ground targets and bombs to inflict more damage to FOBs than any other weapon.

All planes share a common pool of upgrades you can buy with gold, which is earned by defeating enemy players, bots, ground vehicles, towers and FOBs. Some upgrades only apply to certain planes, for example, extra bombs will only have an effect on planes that carry bombs, and so on.

The game currently features leaderboards, a rank system, achievements, passively unlocked upgrades, skins and other stuff you get by leveling up with XP, which is obviously earned by playing! 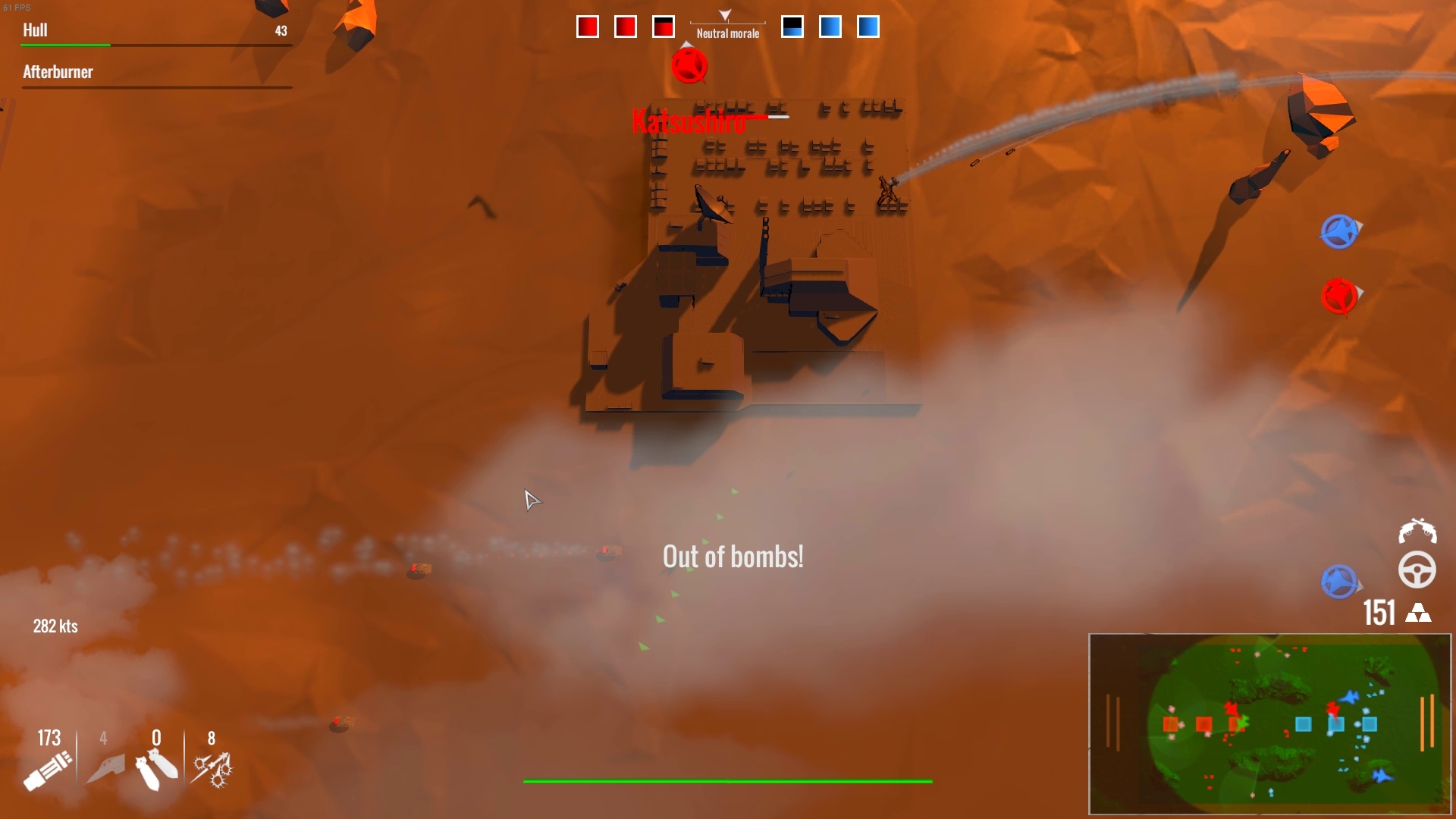 In regard to the combat in Sky Knights, it is fast-paced and I’d say equally skill and loadout based, as it is in all MOBAs after all. In combat, each plane has a cone in front of it which defines the area its main gun can target. Each plane has its own machine gun with its own damage and rate of fire, and also its own loadout. When engaging another plane, two things will make the difference, first is using the Afterburner, which consumes extra fuel but gives a great speed boost for a short time. It’s rather useful to get closer, or farther, from enemies.

The second important thing are Maneuvers, performed with Spacebar by default, if you do a maneuver your plane will start doing a full 360 degree turnaround, which can be oriented with direction and even stopped in the middle to perform some crazy stunts and catch an enemy unaware while simultaneously shooting. These stunts cost Stamina though, and if you run out of it a great vision and maneuverability penalty will be inflicted, so Stamina Management becomes quite important while fighting. What type of gear you’ve got on your vehicle also makes a big difference in combat, as I will explain later in this review.

Always keep an eye out for how much ammo you have left in each weapon. If you run out, go back to your airstrip and land successfully without crashing to get repaired and rearmed in no time.

Countermeasures are also available and are used to deflect heat-seeking missiles, but are impotent against radar-guided ones or machine gun fire. For now, a number of weapons available is pretty small but we do hope to see improvements in the future.

For now, content-wise, this game is limited.  That’s expected though, as it is in early access alpha with the current content being somewhat solid. Because of the presence of just one map, only three plane classes and lack of weapons and upgrades, it gives the impression of feeling underwhelming.  The general structure of the upgrade system, progression system, leaderboards, and achievements is there, and overall there is just barely enough content even for an alpha game, but further updates will hopefully get this aspect better.

The balancing of weapons as far as statistics such as damage, range, quantity, etc. is good, except for SAHR missiles which are drastically overpowered as they cannot be dodged unless you have an upgrade… which can be unlocked only after some levels. Honestly, this is the main problem of balance in this game: in MOBAs each player is supposed to start with different heroes but with the same potential, not being tied in any way to things such as levels.

In Sky Knights the situation is different. Many upgrades available during a match will have to first be unlocked with levels by playing several other matches beforehand, and so experienced players end up being superior to the new low-level players due to all those upgrades they have unlocked with experience. This is a major game design issue which could suit an MMORPG maybe, but it is totally out of place in a PvP MOBA-like game like this one. In the future, I really hope this is resolved because it is one of the major issues encountered with this game.

The game system is simple to learn, it will take some time to fully understand how maneuvers work and get used to stamina and fuel management mechanics, but overall the challenge will be derived from player skill and not from the complexity of the game system which is rather easy to learn at the moment. 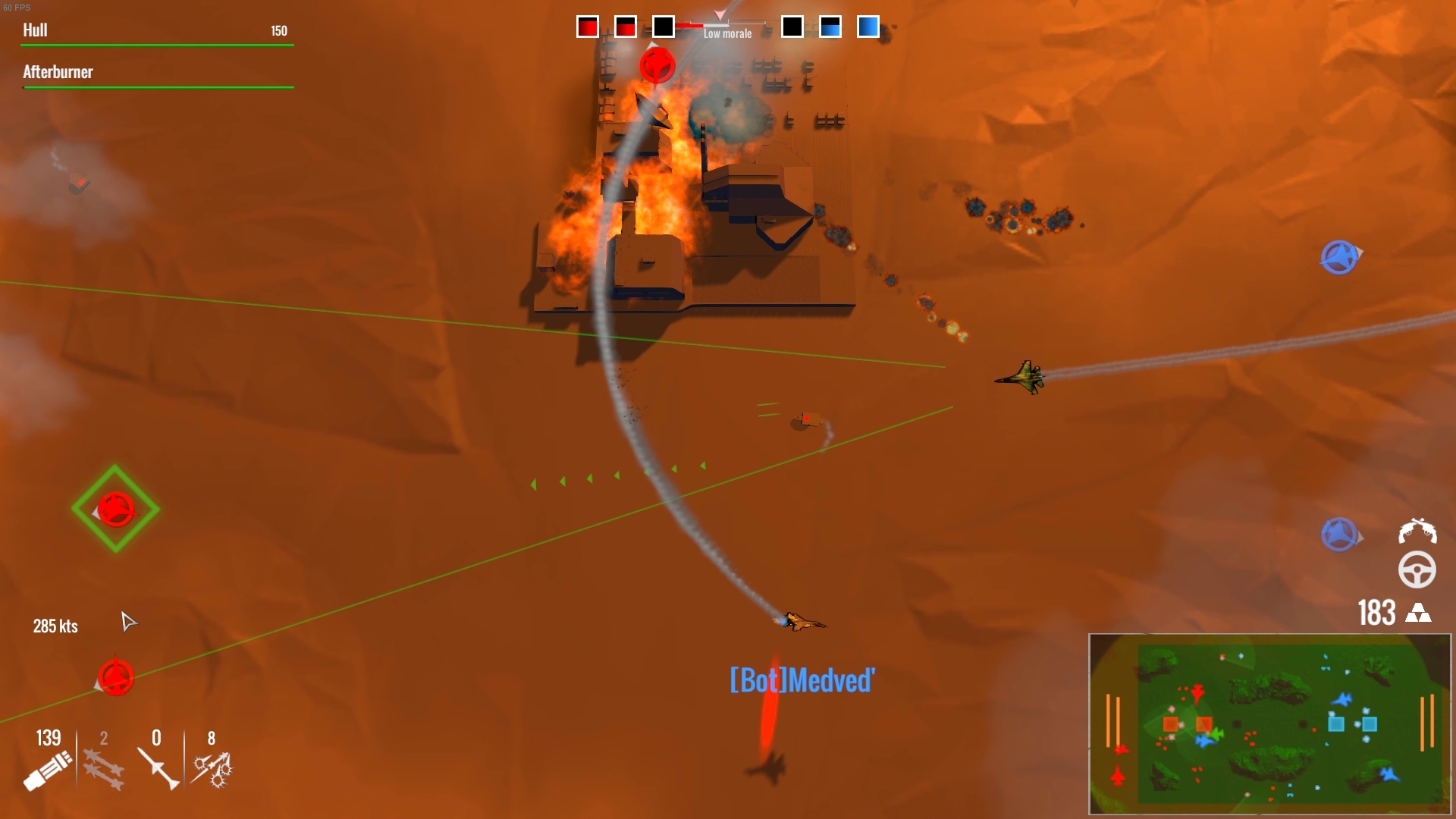 Graphically, you can deduct just with a glimpse that Sky Knights is not exactly top-notch modern graphics, which is not always a bad thing, considering this is a low-budget indie early access game there is a lot of room for improvement in the future, and looks are not everything in a game, but it certainly does it part. Saying this, the graphics are rather simple. Artistic pictures such as character portraits, plane portraits, backgrounds and the UI are good. The actual 3D models and game environment are on par with sufficient standards but just barely.  With the standards of 2017, this is not really sufficient even considering its low budget. Hopefully, we will see resources invested to address this more in the future, as for now all aspects from the models, to the effects, to particles, and so on are just sufficient and barebones.

The sound effects are nothing spectacular.  They could have used some more soundtracks and some chatter when situations like enemies are being destroyed, the bases being hit, vehciles smashed and so on. The weapons and combat sounds are decent, but could have used some better quality especially on gun sounds.

This a very low-impact game, it could run on any current machine, and probably old ones too unless prehistoric or very low spec.

No issues to report.

The bot AI is very primitive and the bots totally cannot stand up against human players, this combined with a low player base results in the team having more players almost always winning because they can just feed upon AIs and get all the upgrades in the blink of an eye.

The UI is decent and the upgrade menu during matches could be improved with categories relative to which upgrade belongs to which plane. Right now all upgrades are slammed into a window which becomes a kind of a clusterfuck later on when more and more upgrades get unlocked. Apart from this, nothing else can be said about game quality right now.

Bugs / Issues
Nothing in particular to report. 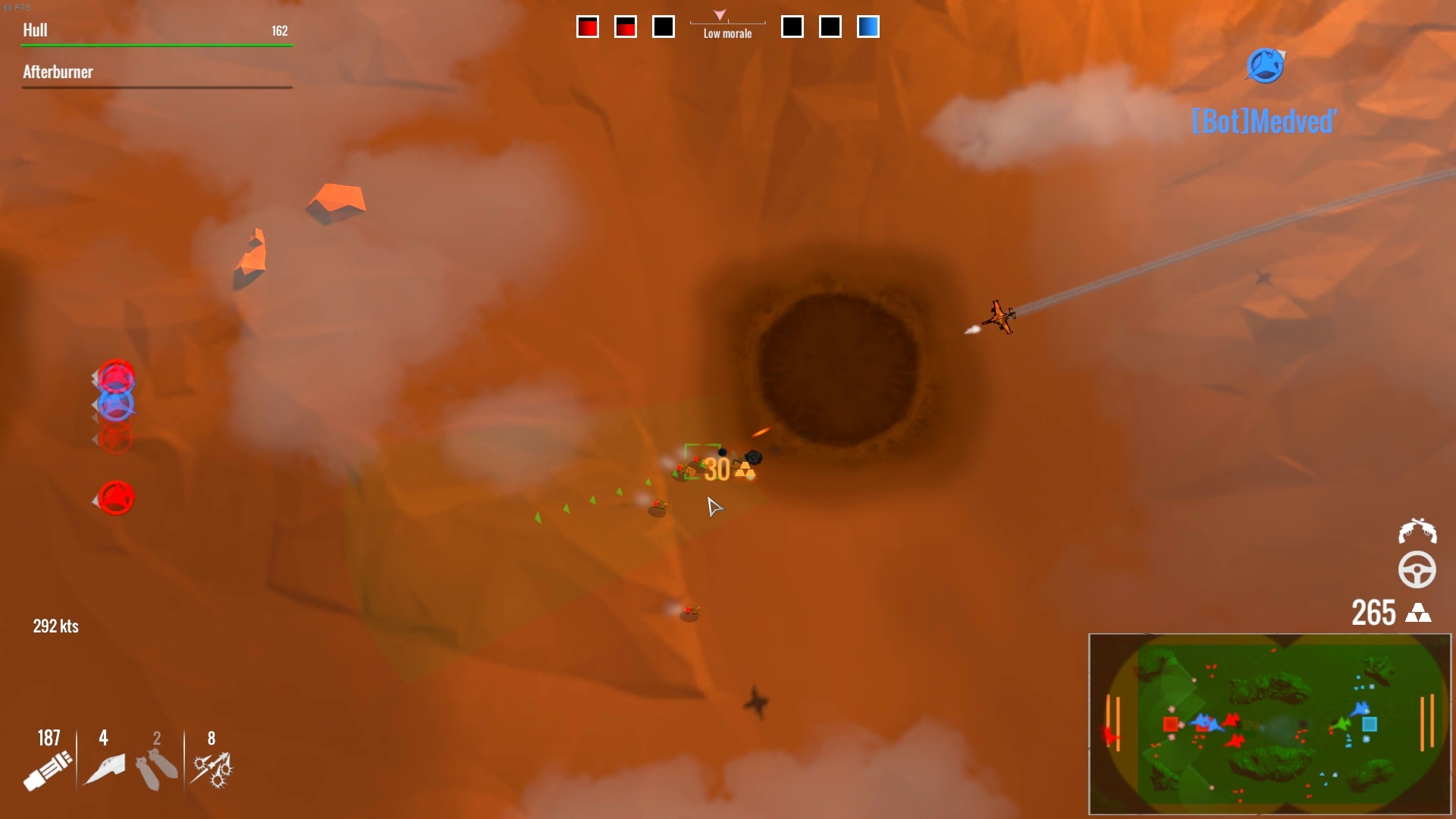