Another efficient top-down shooter by the makers of Crimsonland and Neon Chrome.

Top-down shooters are a flourishing genre nowadays, with many of them turning to roguelites some players might regret the good story-driven ones. Time Recoil aims to be one of those, with a plot of Paris having being destroyed while many countries have fallen under the boot of our antagonist Mr. Time. The main character is a woman that used to work for Mr. Time but has turned rogue, she is sent back in time mission after mission to increase the strength of the resistance and investigate what happened in Paris. When guns do the talking, that’s the kind of investigation I can get behind.

Time Recoil does not want to get in the way of the action. The story is delivered very quickly, no time wasted. There are no RPG elements or loadouts to select, you just go in with a basic gun then use whatever you can find among a limited selection of rifles and a shotgun. The variety of weapons is not much, and likewise there is little variety in terms of enemies and in terms of visual identity of the levels encountered. Countless soviet-like guards in soviet-like buildings that never truly feel like real places. The game itself is even super short, about 3h to finish but then it’s possible to come back to it to get 3 stars on each level plus a leaderboard.

While the content might not seem much, what I feared most was it being repetitive quickly. And surprisingly, it did not happen and I felt compelled to keep playing and ended up finishing the game in one sitting. I prefer that to a game that overstays its welcome. But why did I get sucked in so much despite the poor variety? I can sum it up in one word: flow. 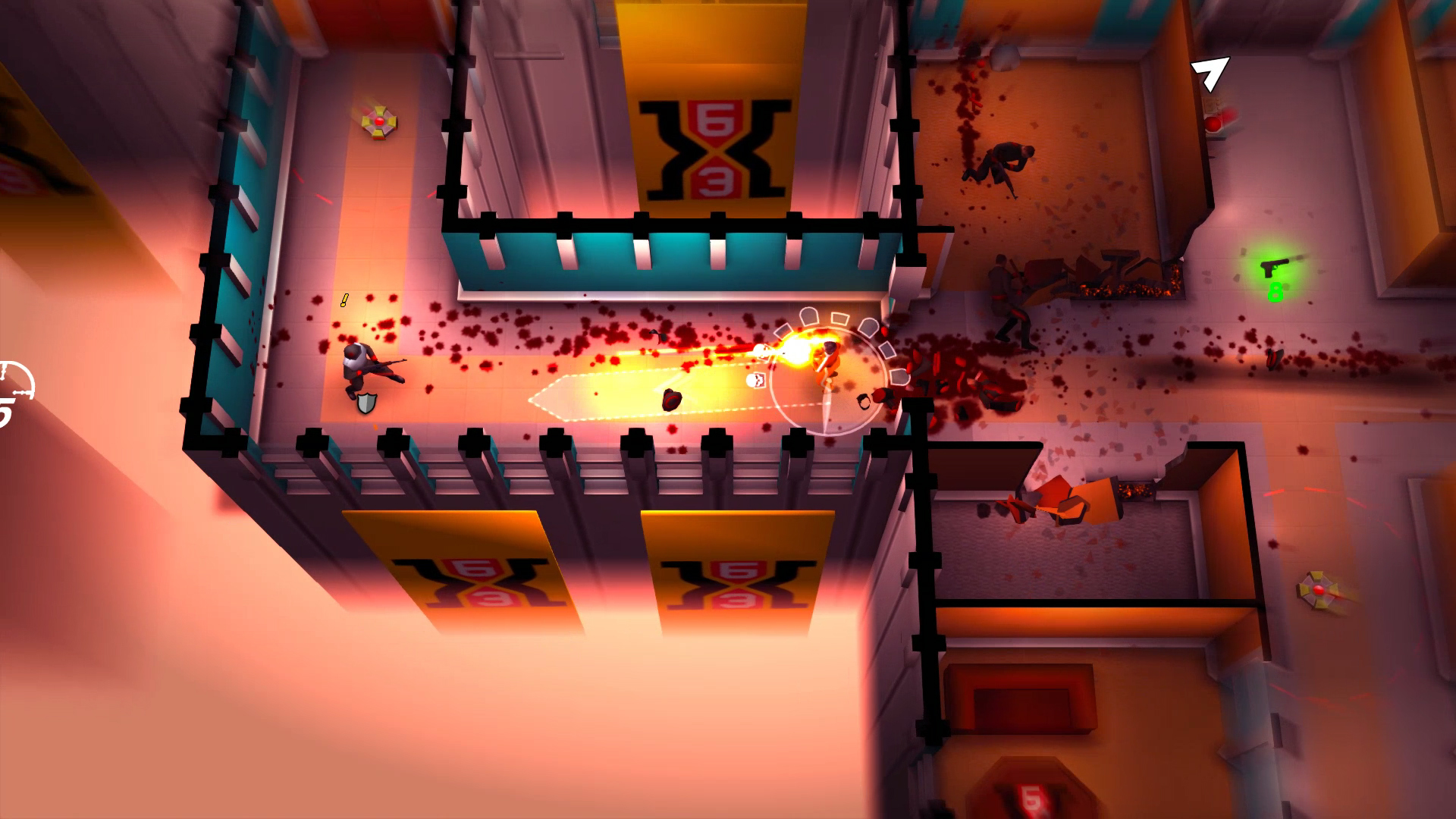 Time Recoil has an amazing flow. A bit like in Hotline Miami when you go from room to room murdering anything that moves. That one bullet – one kill (both on the player and enemies) works wonders here, and it is sublimated by all the time mechanics derived from the theme of the game. First, there is a slow motion that triggers whenever an enemy is killed. It means that you have to get a good first shot then try to keep your advantage by chaining up a series of kills. Groups of foes or later enemies are hard to kill without the slow-mo. Secondly, there is limited ammo in the guns so the player truly has to focus to aim their shots well. Third, killing within a short time window fills up a combo bar that grants time powers. The first of these powers is a dash that can destroy thin walls on the way, which accomplishes to both increase the mobility of the player and give a new method to quickly keep the combo bar filling up again.

I was discussing in another review how Still Not Dead failed to give incentive for the player to fight the monster and the best way to play was to ignore the fights. Time Recoil is a resounding success in that department, as finishing levels does not even require to kill most enemies (just 2-3 targets or documents to pick up) and yet I kept killing them all, both for my own safety and for that superb flow tied to the combo bar. This is a brilliant game design decision that carried the game till the end. 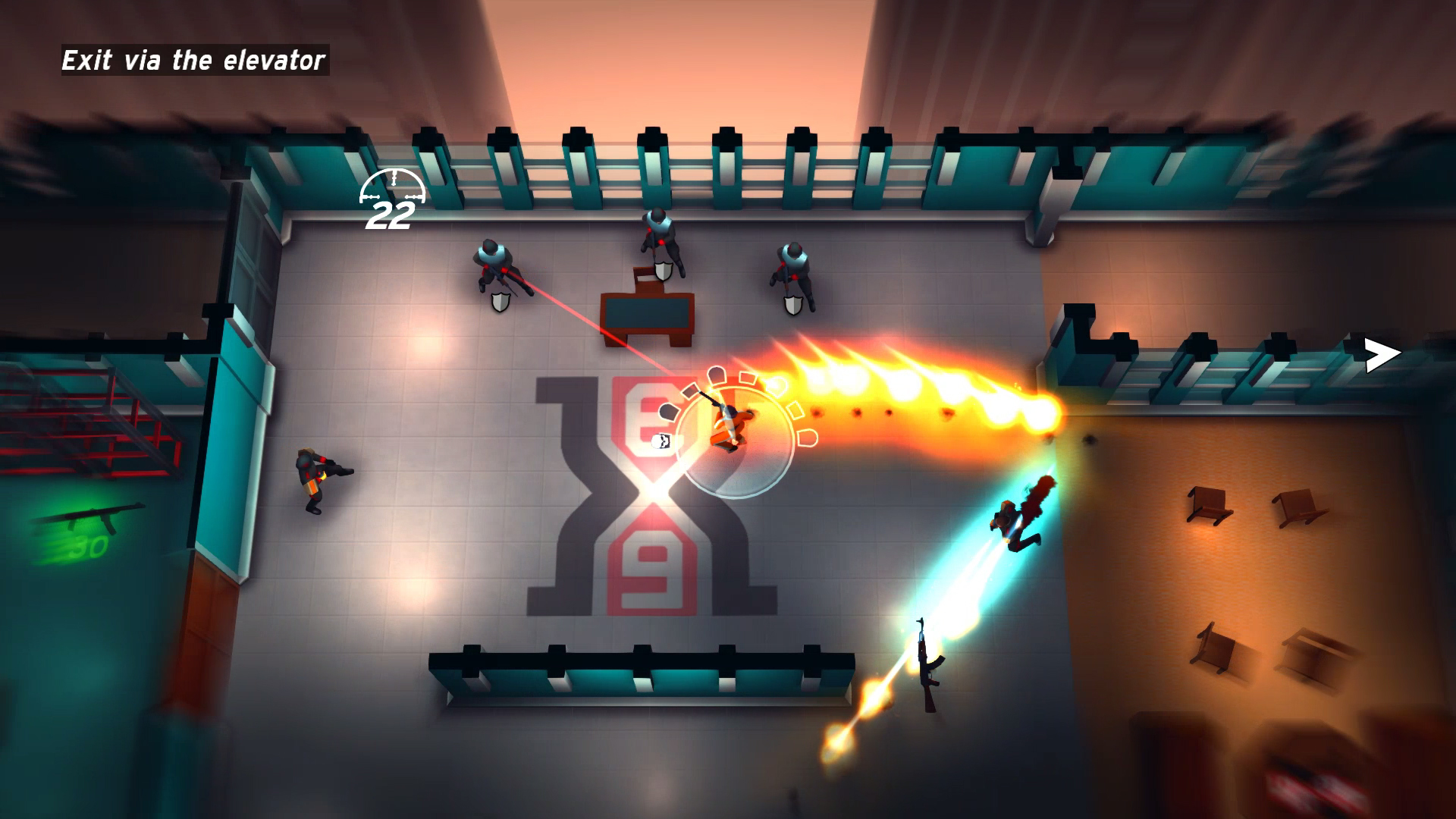 And the good design decisions are not stopping here, because there are additional (rare) traps that are once again intertwined with the time mechanics. Some lasers are going too fast to be avoided, but killing a guard nearby will give just enough slow-mo to slip in between. The level design is very good in accommodating the player in places that need a dash or a slow-mo, there are always enough guards around or in worst case scenario there are subtle waves of incoming enemies to help the player.

Finally, the violence participates in the feeling that this is a beautiful dance. Each enemy killed will leave a nice juicy trail of blood behind them, which is fantastic feedback for the player to know that a bullet has connected even when they are already tracking the movements of the next target. Adding to the visual feast is the great music, enhancing the feeling of being in a transe.

The only false note was the random drop of weapons from fallen enemies, which can sometimes fail to happen while the clip is empty and there is a very tough fight a few moments ahead. 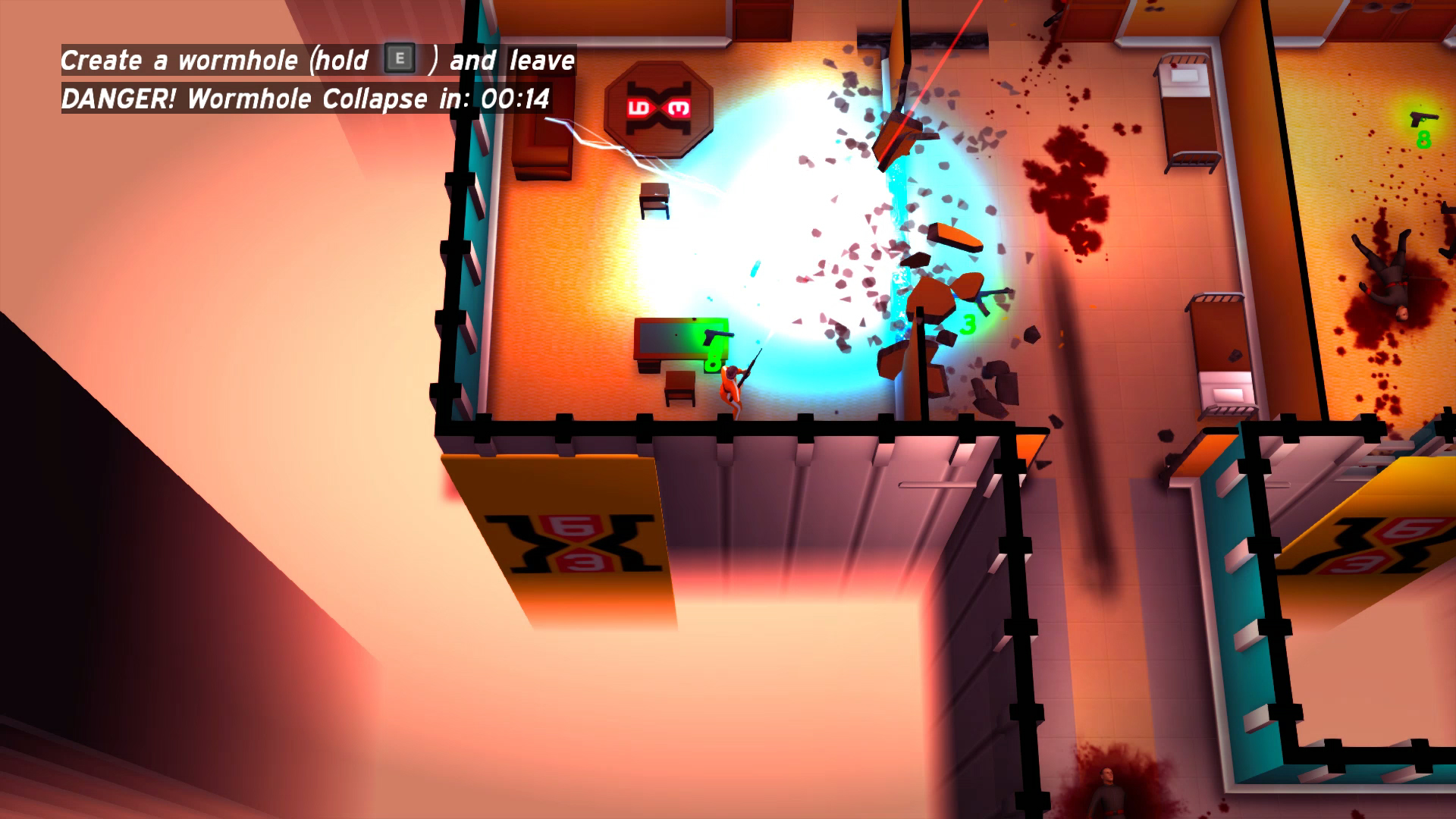 When I played the preview version, I was afraid that the game would fall short very quickly, and I am happy to report that the final version succeeds. The only criticism that I noticed at that time and that I can still leverage at the game is the lack of personality of the resistance headquarters. It looks just like any other place and the 3D models of the characters do not reflect the portrait of whom the player is speaking to. I would have much more appreciated some subtle environmental story-telling at work there just like Hotline Miami did. The story is not particularly interesting to follow, however I still enjoyed the ending. 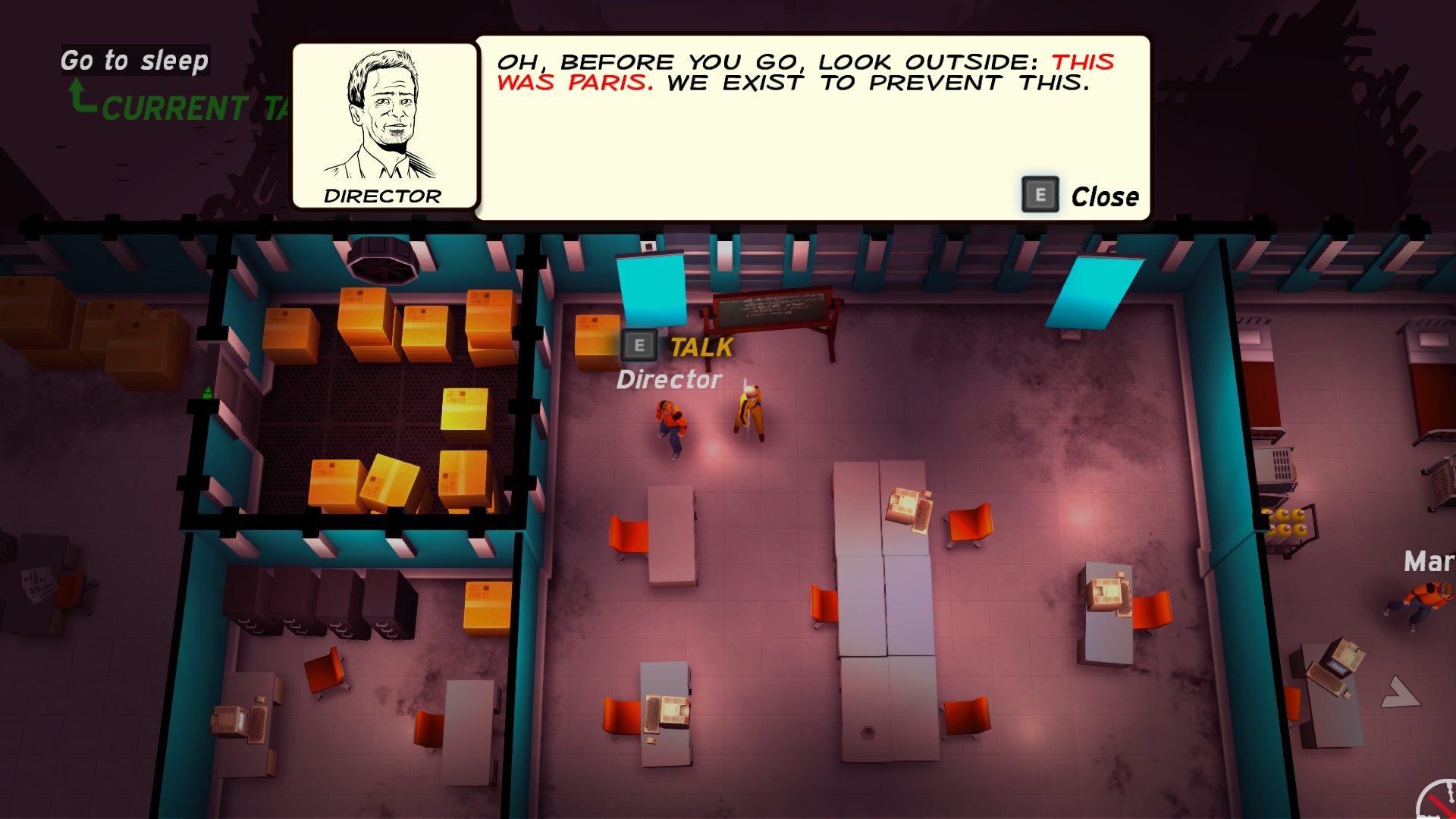 Time Recoil is a short game that lacks a bit of variety in its environments and enemies. However, it makes up for that with a superb game design revolving around slow-mo and its accompanying powers to obtain through a well-oiled combo bar. All the game mechanics give incentive to play well and enter a great flow that so many games fail to achieve. Not a Hotline Miami-killer, but a good and lean top-down shooter to enjoy for a small price.