A barebones roguelite FPS with a solid foundation in early access.

The blood of our fathers

Back in 1993, DOOM revolutionized the world of gaming as we know it by improving upon id’s formula of Wolfenstein 3D and adding better levels that are not actual corridors. Suddenly, there were all sorts of angled surfaces, open areas and even visual verticality – although in reality, it was not yet possible to aim up and down. If DOOM is the father of all FPS, then Wolfenstein 3D is the grandfather. I finished Wolf3D once about twenty years ago, once again five years ago to see if my bad impressions were warranted, and I felt painfully forced to revisit some levels in the otherwise excellent Wolfenstein The Old Blood. So I can safely say that I am very bored of it, all of it. The dull lack of verticality and the identical backgrounds that keep repeating themselves are clearly outdated now. And yet, many indie games come out all the time with huge chunks of pixels and dreadful cloned corridors. After a few glances, I just royally ignore them, except for the very good Gun Godz. And yet I gave a chance to Still Not Dead. Why is that? Simply because the screenshots revealed an open space and several different structures. Finally, some room for my big ego and my bigger gun!

Despite the hinted at verticality of the structures and some (low) flying enemies, from the start, I was put off balance by the fact that there is no vertical aim. Moving the crosshair is only possible from left to right. Oh no, did I mistakenly land in one of those Wolfenstein 3D clones? Thankfully, it is still possible to jump and climb on walls, and the levels are not tedious corridors. We are more in original DOOM territory than in Wolfenstein 3D, thank Satan. It feels a bit strange at the start, but I rapidly got used to the lack of vertical aim, as it made shooting easier if there was only one dimension to cover. The hovering enemies get targeted just as easily, so there is no problem there (I have been angry at some run ‘n’ gun roguelites for having lots of vertical enemies and no way to aim up). More importantly, the shooting feels good. As in, the recoil, the ballistics, the sounds, the feedback on the enemies, everything is on-point there. This game is clearly doing better than tons of its competitors. 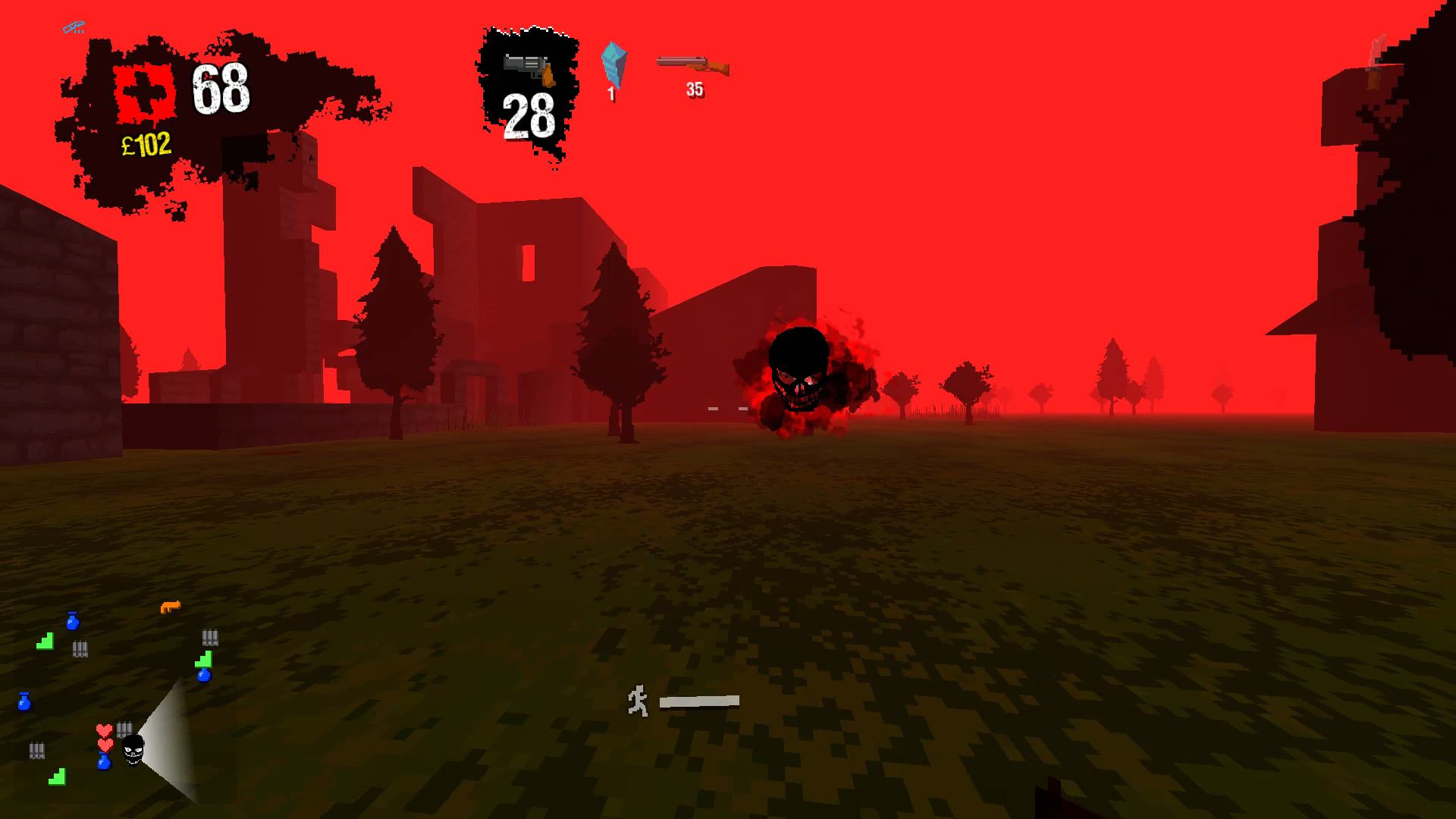 I was going on about my peaceful life, mowing down herds of zombies and scorpions as if I was in Serious Sam, when suddenly night came upon me. I was already finding the apocalyptic location unwelcoming, but all the colors shifted to black and red and I felt that something dreadful was in the air, as if the game was urging me to run for my life. Then, I saw it, Death itself coming after me. I jumped into a portal door and escaped, but it was a close call as Death is faster than the normal moving speed of the player while sprinting needs to recharge. Surprisingly, I genuinely had a great time, from the satisfying feeling of the weapons to the real tension of being chased by Death in an FPS. And let’s not forget the lovely settings, some sort of ruins and hedge mazes that vary the sights while feeling like a desolate post-apocalyptic wasteland place, now populated by monsters. The weather effects and change of color of the sky sell this particularly well, as does the very good soundtrack. You can feel the beat of the end of the world and the unchained fury that calls to you. 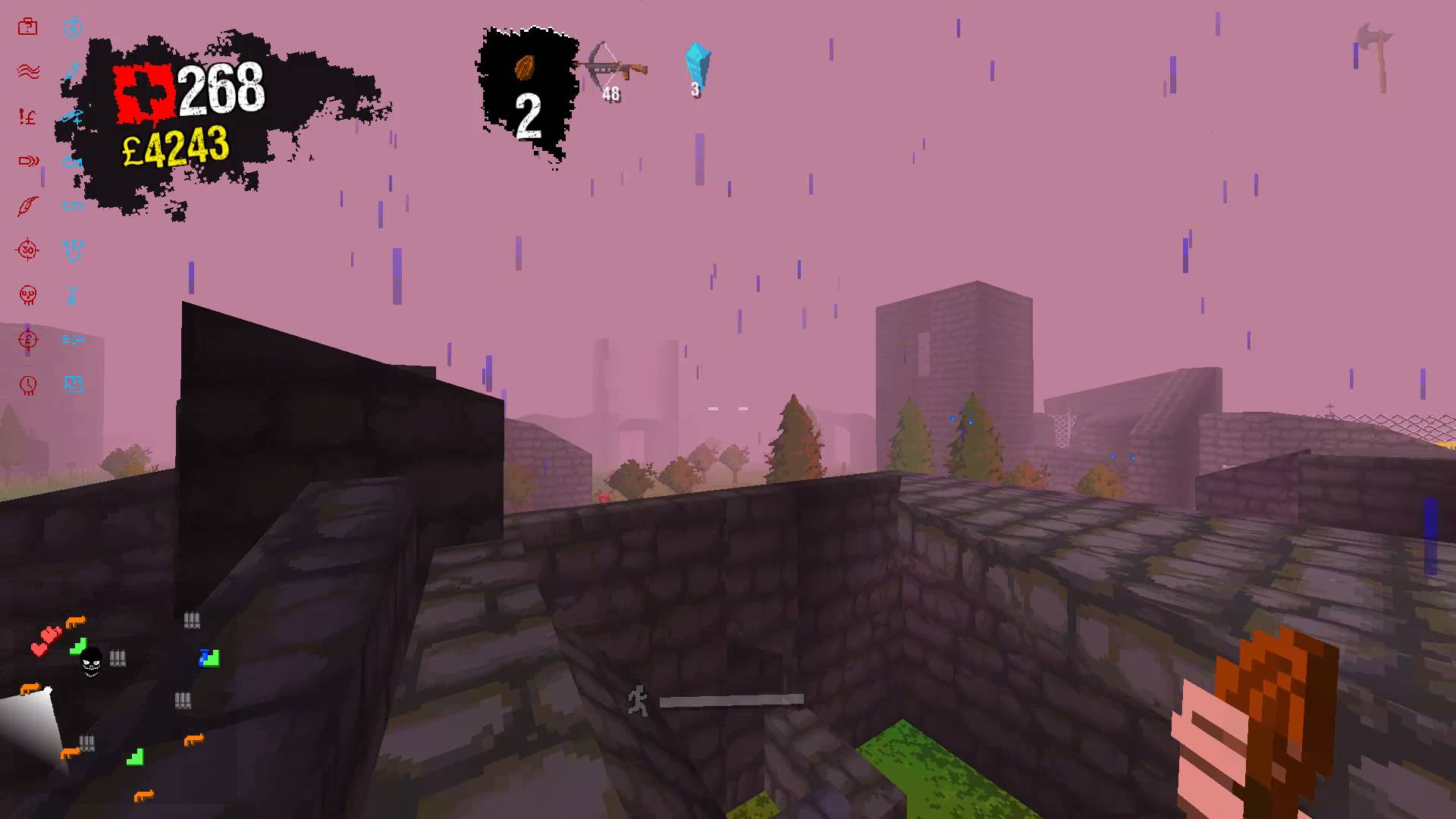 So what happened when I passed the portal? I got to choose between several curses. Each time the player enters a new level, there is either a curse or a blessing. Faster or slower bullets, better indications on the minimap or a random switching of weapons at each level. The weapons can be bought when they are seen lying on the ground (counter-intuitive not to just pick them up). Admirably, from the start, the player has gems to randomly change the weapon on display and maybe find something better. There are also ammo locations, where ammo has to be bought as well. And there are health locations to buy some… Ah, no, actually health is quite rare. In each level, there are a few miserable carrots that get you 5 hp, or maybe an apple for 10 hp. Just trying to fight your way to them might cost you at least 20 hp and 30 bullets. Ouch. This is where the game starts to fall apart, the systems do not create a positive loop to reward the player for taking risks or killing enemies. In the recent DOOM of 2016, it is possible to kill enemies to replenish health, which pushes to player to get close to the monsters. There is also a chainsaw for a huge ammo boost. Basically, in order to keep killing more you need to kill and thus everyone is happy. Still Not Dead is too stingy with its health and ammo to reward players for moving around or killing monsters, so in the end, the best tactic became not to engage with the system. 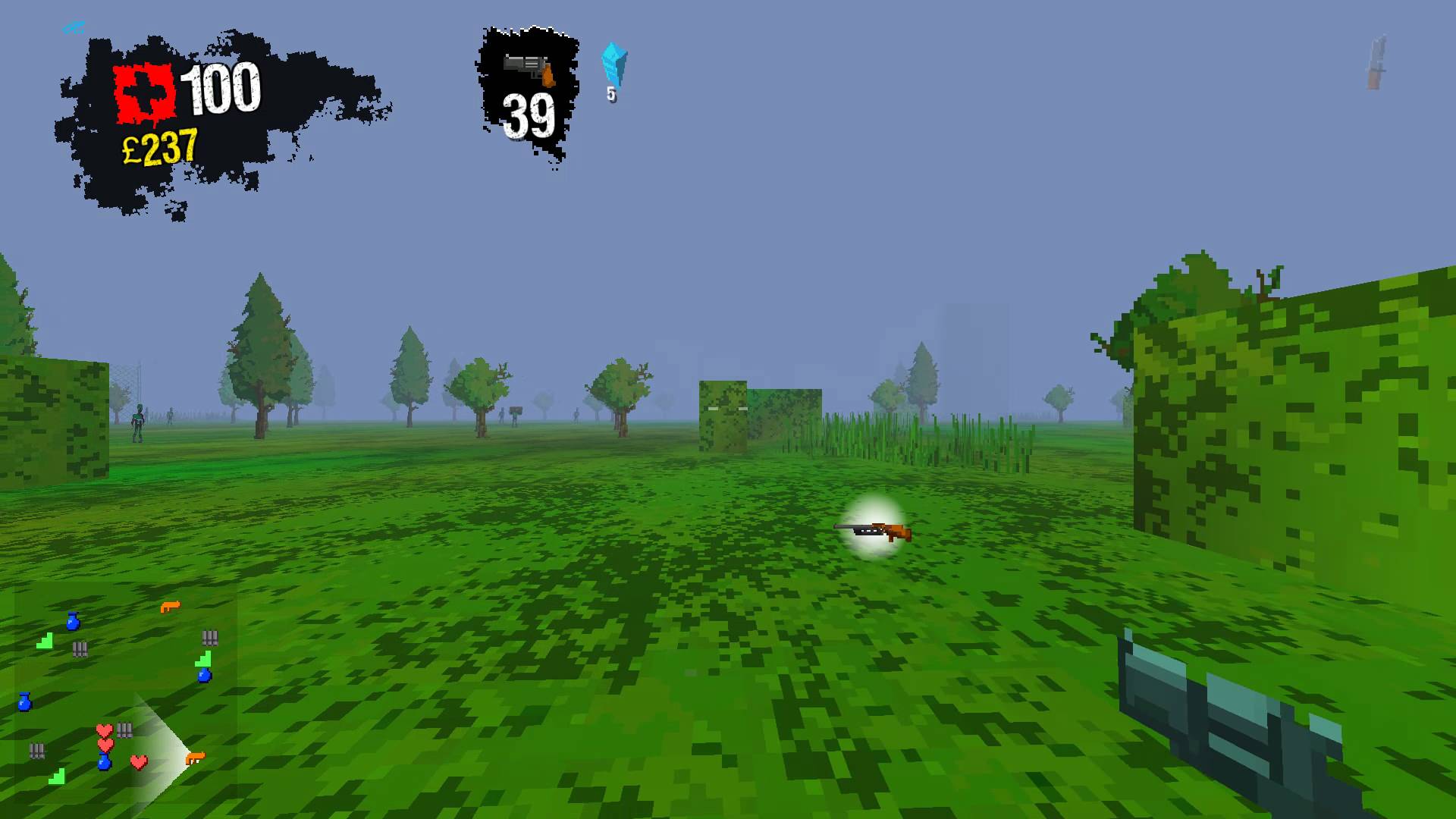 You can see on the video here that my most successful run was when I stopped trying to fight enemies and felt content in running through the levels using the dash of my axe, in search for the few pick-ups that interested me then moving on to the next level when it was time for Death to come after me. On one hand, making the enemies so dangerous is an interesting way to approach the game. I was genuinely feeling a lot of tension about getting cornered or engaging in a fight I would not win without a lot of blood. But on the other hand, that’s not why am I playing these games, no? I come here to kill and get better at knowing my enemies and the systems of the game so then I can kill better and go farther into the game. Still Not Dead did not give me any incentive or reward for doing so. I think that it would at least have been more fun if the player did not have to buy the weapons, but they could just be picked up and used (perhaps to compensate for more varied weapons, you would not be able to buy ammo). That way, the player would have lots of toys to play with (there are quite a few cool weapons in this game, from barbed-wire to rocket launchers). And there needs to be more health in the pickups for the journey to be worth it, or something original like some very dangerous enemies that drop health when killed, or more money dropped by monsters to make it worth the fight, or a specific number of monsters to kill before the gate to the next level opens.

Edit 2018: The systems have been fixed, health is worth more, the bigger monsters drop more gold, and it’s mandatory to kill a certain number of enemies before moving to the next location. Great job, Greg Sergeant! 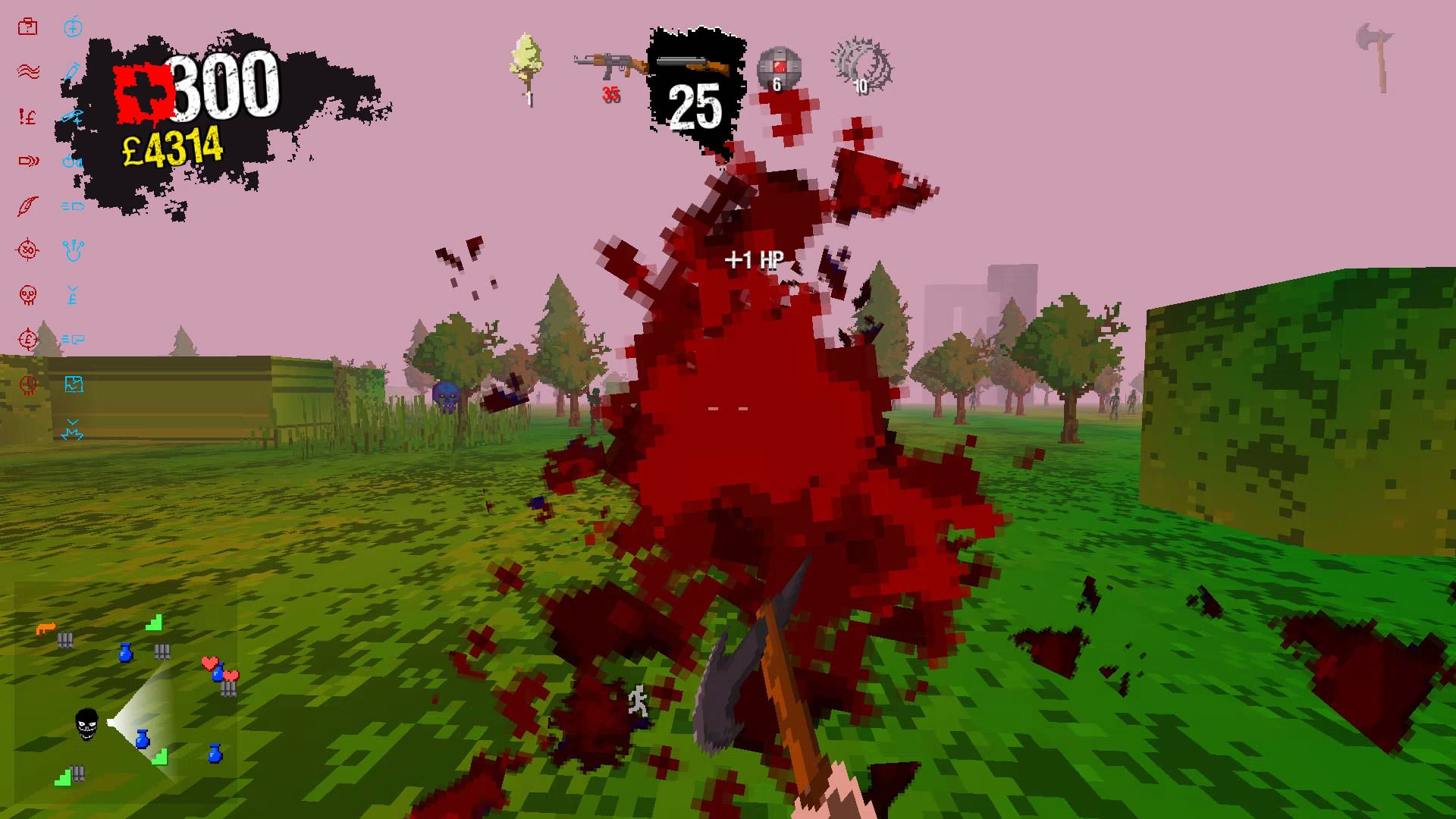 The game is still in early access and thus incomplete, and it shows. Each level is basically the same (except the first few that have less monster variety). There are no new structures, no new terrain/structures, no new monsters (from the start there are interesting enemies such as the Zombie holding a barrel that can be exploded to clear the area, but apart from that and the pyromaniac skulls that appear slightly later, the game lacks memorable opponents), no new rifles, no new layouts for the map, no boss fights. The game just never ends, and you get a score when you die. After a few failed attempts in which I tried to shoot my way through with great difficulty, I switched to a run ‘n’ axe dash routine and I never died. And the game never ended, until I was bored and decided to commit suicide by Death. It probably took much longer than suicide by cops. The game was just released in early access, it is very likely to have more content over time (the developer talked about new levels, new enemies and a scoreboard), but as always if you buy an early access title you should come with the mindset of enjoying what you already have and not what you might have in a distant future. Finally, so far, it is not possible to rebind the keys. 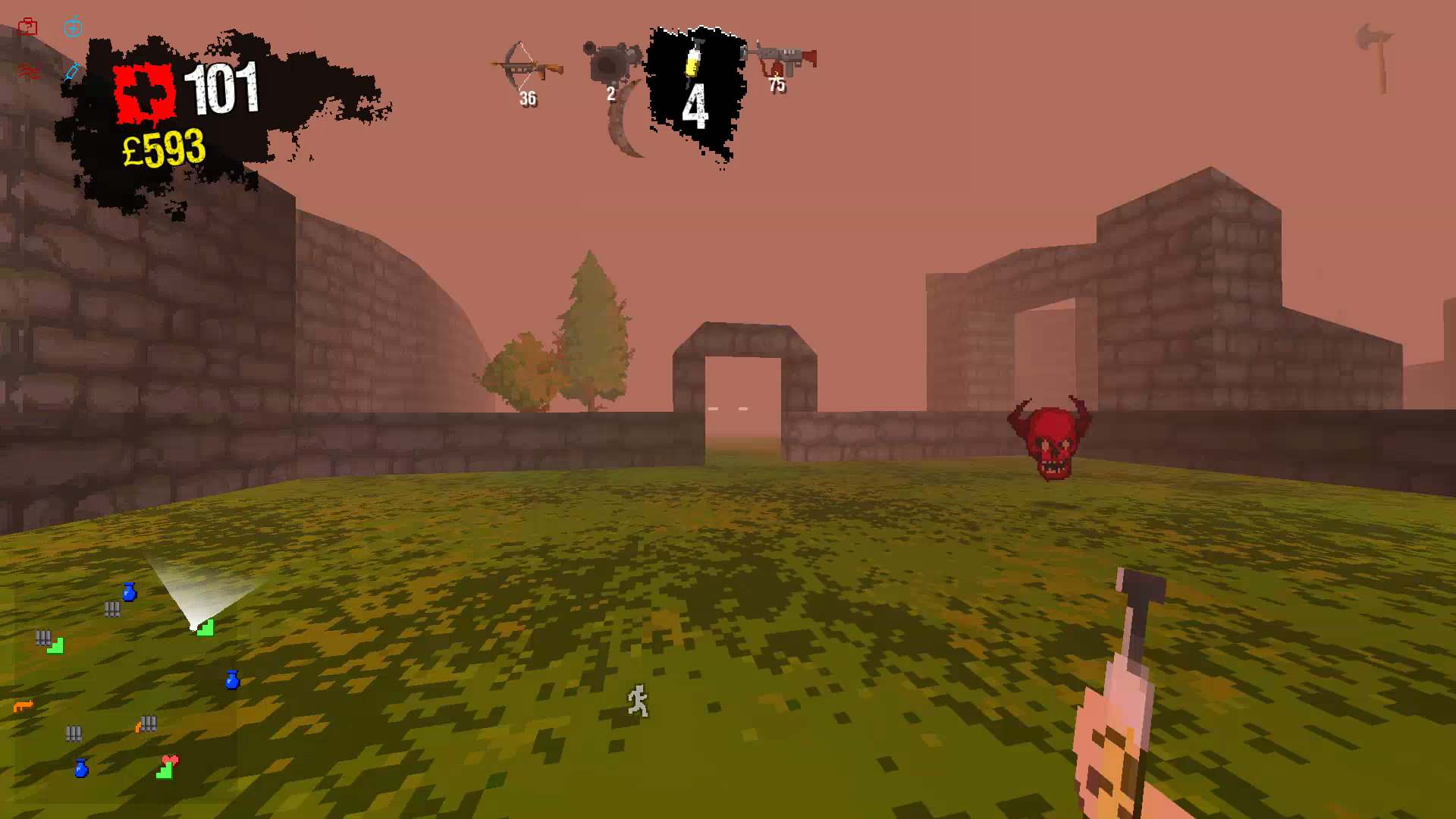 Still Not Dead gave me a very good first impression filled with great shooting and apocalyptic tension before it fell flat before an hour due to lack of things to renew the experience. It just does not have enough content yet, and mostly the systems for health/ammo/weapons clearly needs to be fine-tuned if not completely revisited. The game is quite cheap, so if you want a few quick rides of fun I would still recommend giving it a try, but keep in mind that at the moment this is a solid groundwork rather than a fully-fledged game you will sink hours into.

Edit 2018: The game feels much better now. It still does not feel completely polished, but it’s perfect for short sessions of intense gunfights.