After finishing the melee-only Mr. Shifty, I was happy to get my hands on another top-down shooter in the vein of Hotline Miami: Time Recoil.

10tons Ltd, responsible of the well-regarded Crimsonland and Neon Chrome, are now currently developing Time Recoil. The story is set in 1987. Paris has been destroyed and the world has fallen to the evil clutches of Mr. Time. Thankfully, a team of resistance fighters managed to build a time machine and is sending missions to the distant past of 1975 in order to find out what happened and how to revert it. The resistance fighters are quite brave, since coming back to the future of 1987 causes a full body collapse and they die. That is until one day they get their hands on the main character, the perfect weapon immune to the destructive effects of time travel. Our main character is then sent back to the past on various missions that are often resolved in violence.

I recorded this Let’s Play before I was authorized to write a full preview.

Unlike Mr. Shifty, Time Recoil is not afraid to show blood, with a beautiful splatter in a straight line looking pretty cool. Some surfaces can be destroyed, whether by shooting them or by dashing through them once that power is unlocked. Here the concept of combos from Hotline Miami is pushed to a paroxysm, as the combo chain unlocks gradually more devastating powers, and failing to kill an enemy for a few seconds will reset the chain. Killing is also not an easy feat as ammo is scarce, making a one-hit kill an often necessary procedure. To help with that, there is a slow-motion effect triggered by every kill. Despite the slow-motion, enemy bullets come quickly and the player has to be fast. What you end up with is a meticulous, yet fast-paced shooter with a stylish slow-mo to help you perfect your aim. For the later levels, this often translates into repeating the sequence a few times until you know how to chain the enemies correctly, as if you were a speed-runner. While this may leave casual players out in the cold, others will enjoy a system that manages to put them in a tense flow of action with a quick restart upon failure. 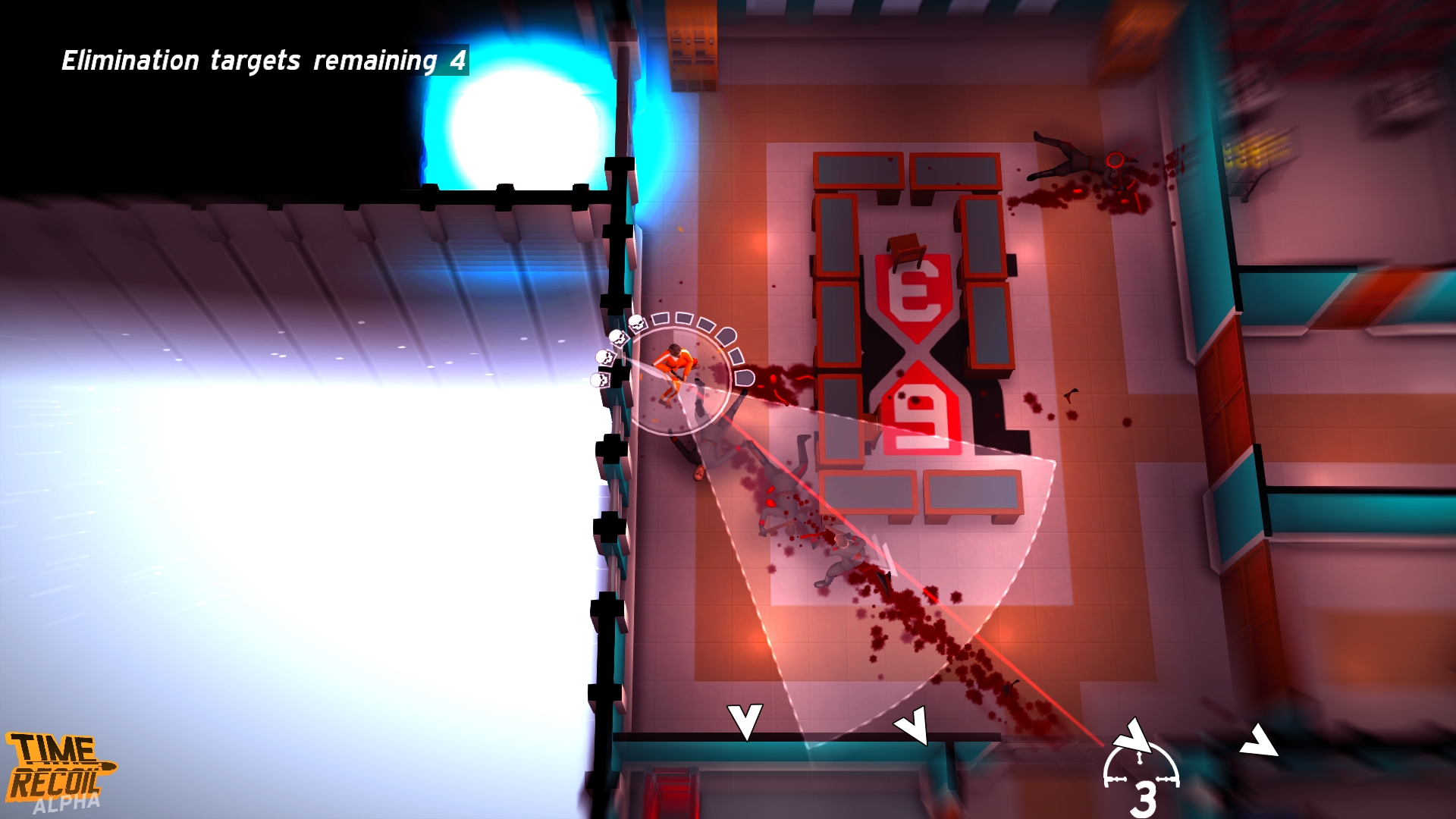 While the gameplay is quite satisfying for a few levels, what Mr. Shifty taught me is that the developers have to be careful to not let the formula become too repetitive. In Time Recoil, thus far I remain a little sceptical because most weapons feel the same (the shotgun only appears quite late), and the melee attack is close to useless (a deadly short dash forward would have worked better). Each level also looks much the same as the last.

Hotline Miami avoided all of these pitfalls with a wide variety of weapons associated with a level design that locally favoured one play style after another. The levels each had a unique feel with a wide variety of locations and style, and the blood baths were interrupted with chill yet intriguing story sequences. Time Recoil also has intermediary sequences in the resistance headquarters. However, they strongly lack personality, as the base looks like any other building, and the 3D models for each character do not reflect the portrait displayed during their dialogs, nor exhibit any body language that would inject life into them. Maybe I am being too picky on a game in an early alpha state, but I find it best to let the developers know what to improve in case they had not considered it already. 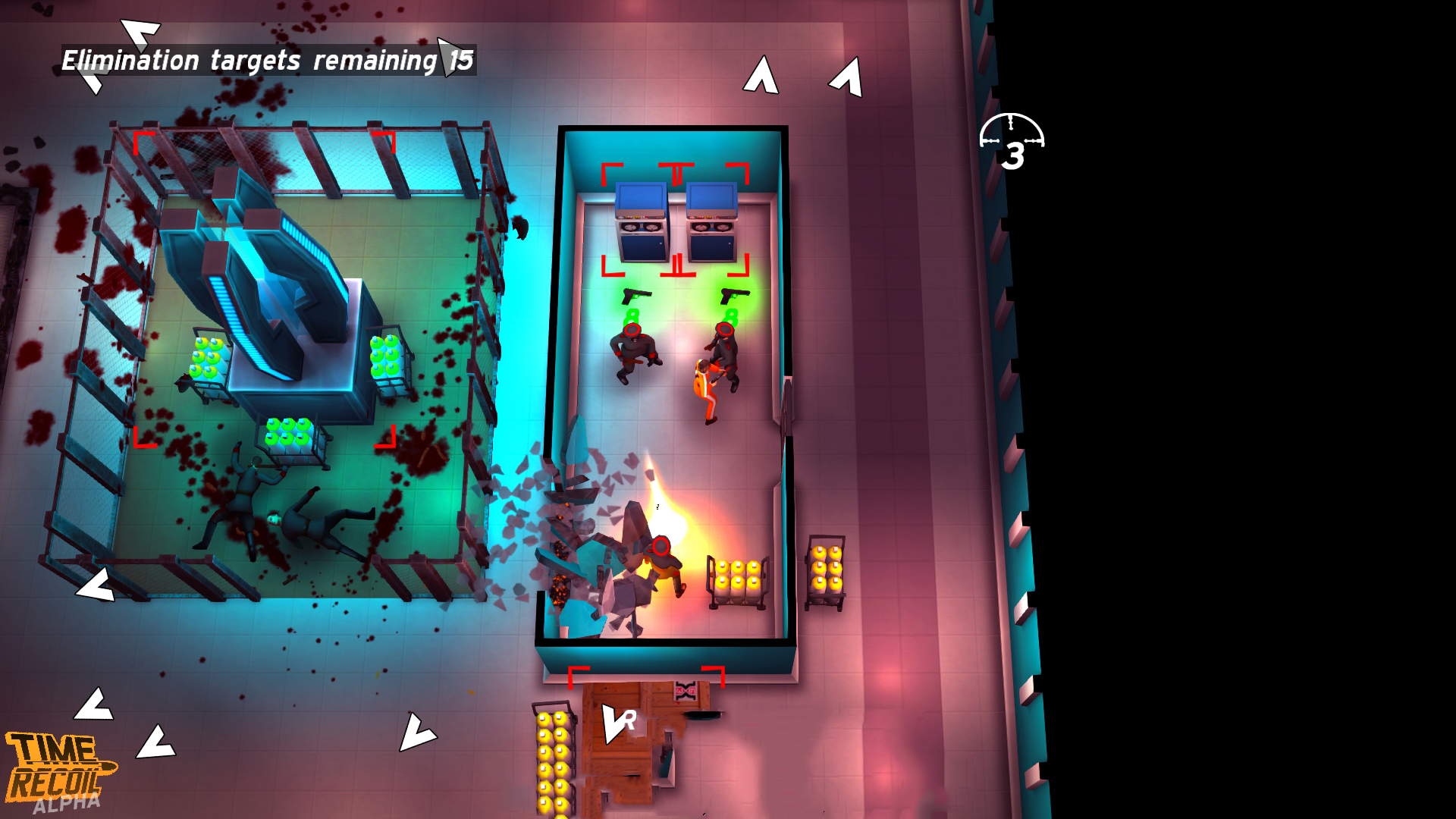 Technically, the game runs like a charm; I didn’t encounter any performance or stability issues at all.

To mention a few other things I have not covered yet, while the music is not a monumental breakthrough like in Hotline Miami, it’s good electronic music and a clear step up when I think of what I just experienced with Mr. Shifty. The mood of the game triggers feelings of the Soviet era.

The developers do need to be careful with the story, though. In 1975 I tried to kill characters that are future resistance fighters, causing game-over due to a time paradox. Which is a bit paradoxical itself, considering that time paradoxes are included in the story; I still managed to kill an important character, Magnusson, without the game noticing, and subsequently letting me speak to future-him as if nothing had happened. 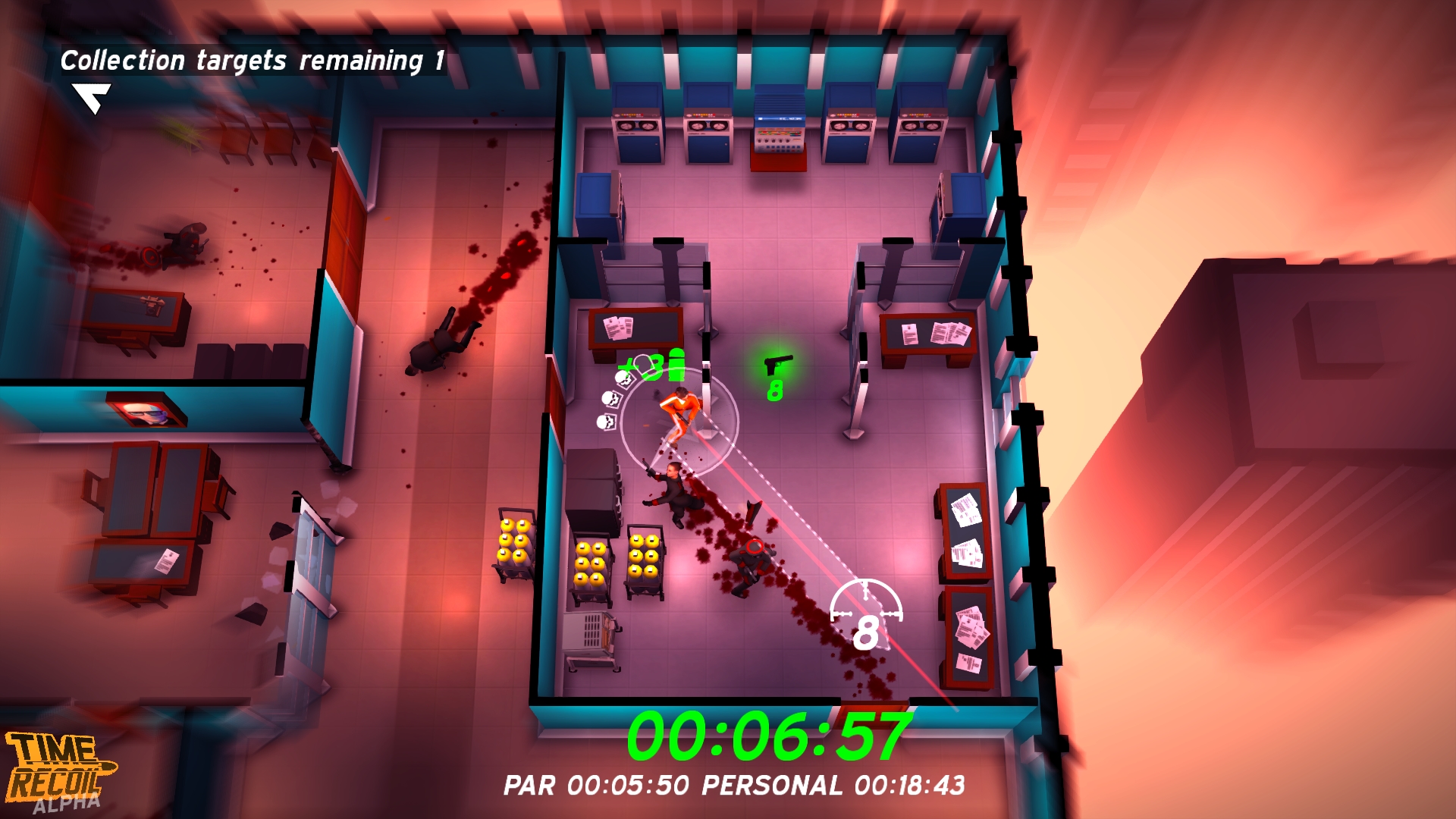 Time Recoil has a solid foundation that functions well, but there is still a lot of work to be done to breathe some life into it and make the level sequence less repetitive. The shooting enhanced by frequent slow-motion is a good system — very reactive and it flows really well — so let’s wait and see how this strong potential eventually turns out.