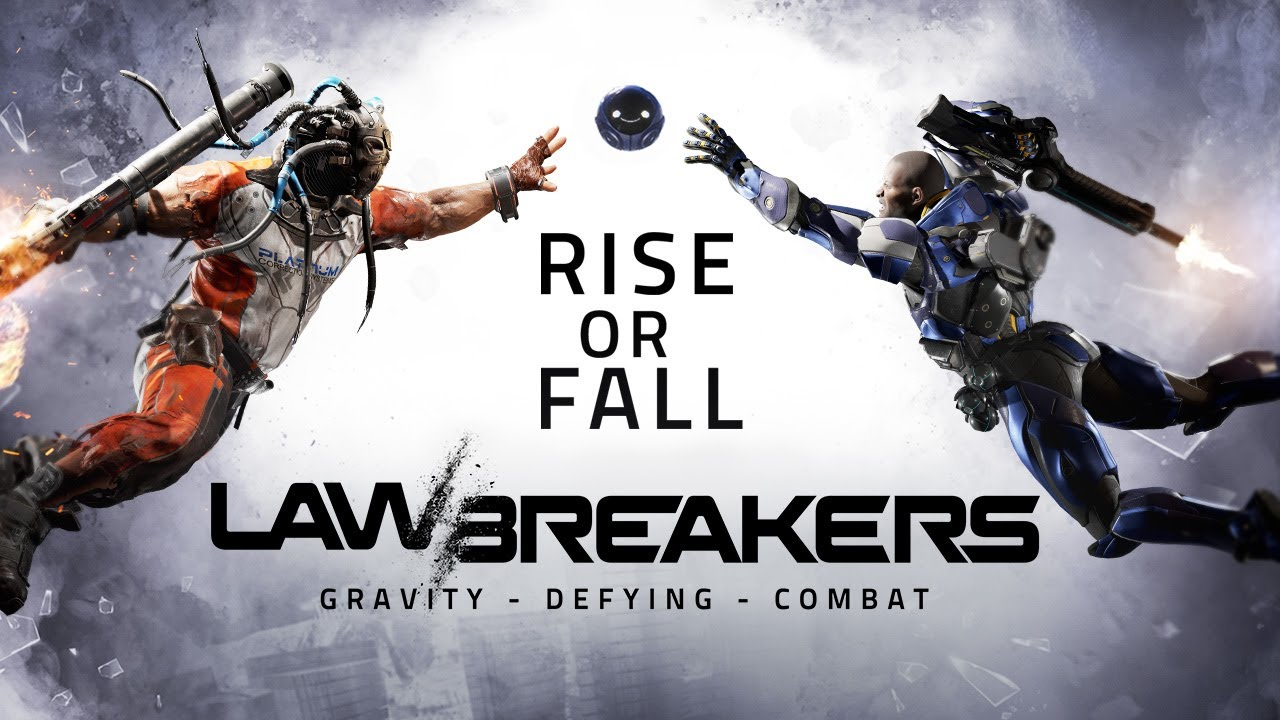 LawBreakers makes its entrance as a challenger to Overwatch and Quake Champions!

The evolution of Arena Shooters

For many years, the genre of the Arena Shooters was assumed to be dead. And yet, in 2017 we are seeing a revival in full force with LawBreakers and Quake Champions. Is this a middle finger to the naysayers? Well, this remains to be seen. On one hand, there have actually been many Arena Shooters released relatively recently – for example, Quake Live, Reflex, Toxikk and even the alpha of the new Unreal Tournament. And yet, none of these games has managed to really attract flocks of new players. On the other hand, games that have had their roots in Arena Shooters have achieved considerable success, such as Team Fortress 2 and finally Overwatch which seems to rebrand the genre into Hero Shooters. What can we conclude from that? There is an audience eager to play non-realistic multi-player First Person Shooters that are not Call of Duty, Battlefield and Counter-Strike, but the tastes of that audience have evolved. Picking up weapons in small maze-like maps in which you roam around is not very appealing nowadays, the fun and tension is in the back-and-forth of “Assault” maps with objective to take or to defend across several stages of the map, and loadouts for memorable characters to pick on the spawn rather than weapons to find on the map. 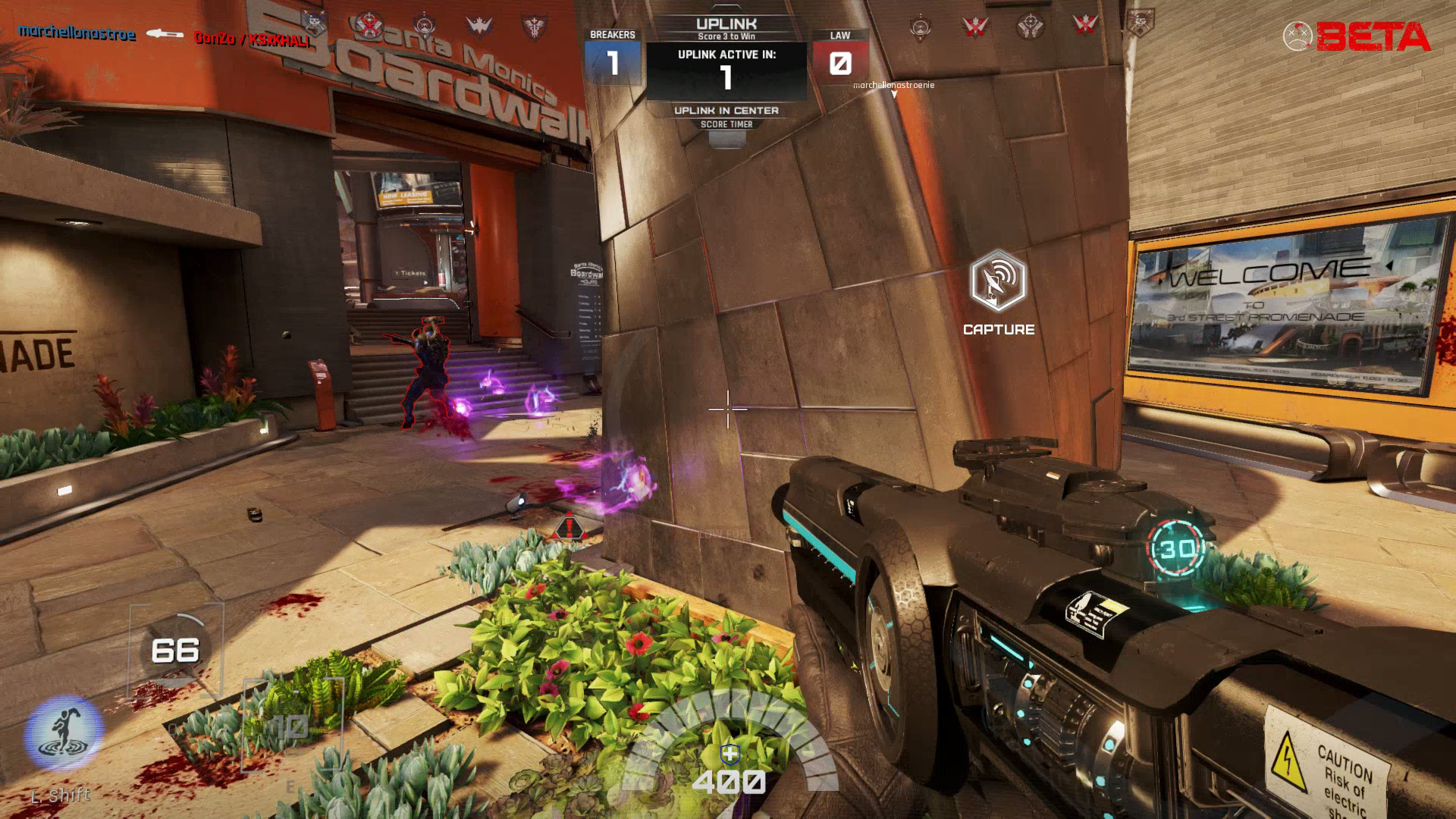 Cliff Bleszinski, the founder of Boss Key Productions, is considerably known for designing Unreal Tournament and Gears of War. This is a man of vision, and when making LawBreakers he seemed to have realized that Arena Shooters could indeed not remain the same as in the past and needed to evolve, and thus he took many leaves out of Overwatch’s book. LawBreakers pins two teams against each other, the Law (the police) against the Breakers (the bandits). The players choose among several heroes that come with their respective weapon and power loadouts, complete with an ultimate ability that comes into play every once in a while. The influence of Overwatch can even be felt in the powers themselves, with D.va’s jump jet boosters or Tracer’s blinks forward. There is even a character with a grappling hook, but this time it’s not a single use and thus it becomes a much more potent way to zoom across the level. Every single character of LawBreakers benefits from one of these mobility abilities as it is at the heart of the game (if you have never played Overwatch, just bear in mind that these abilities usually are on a 5-10s cool-down). 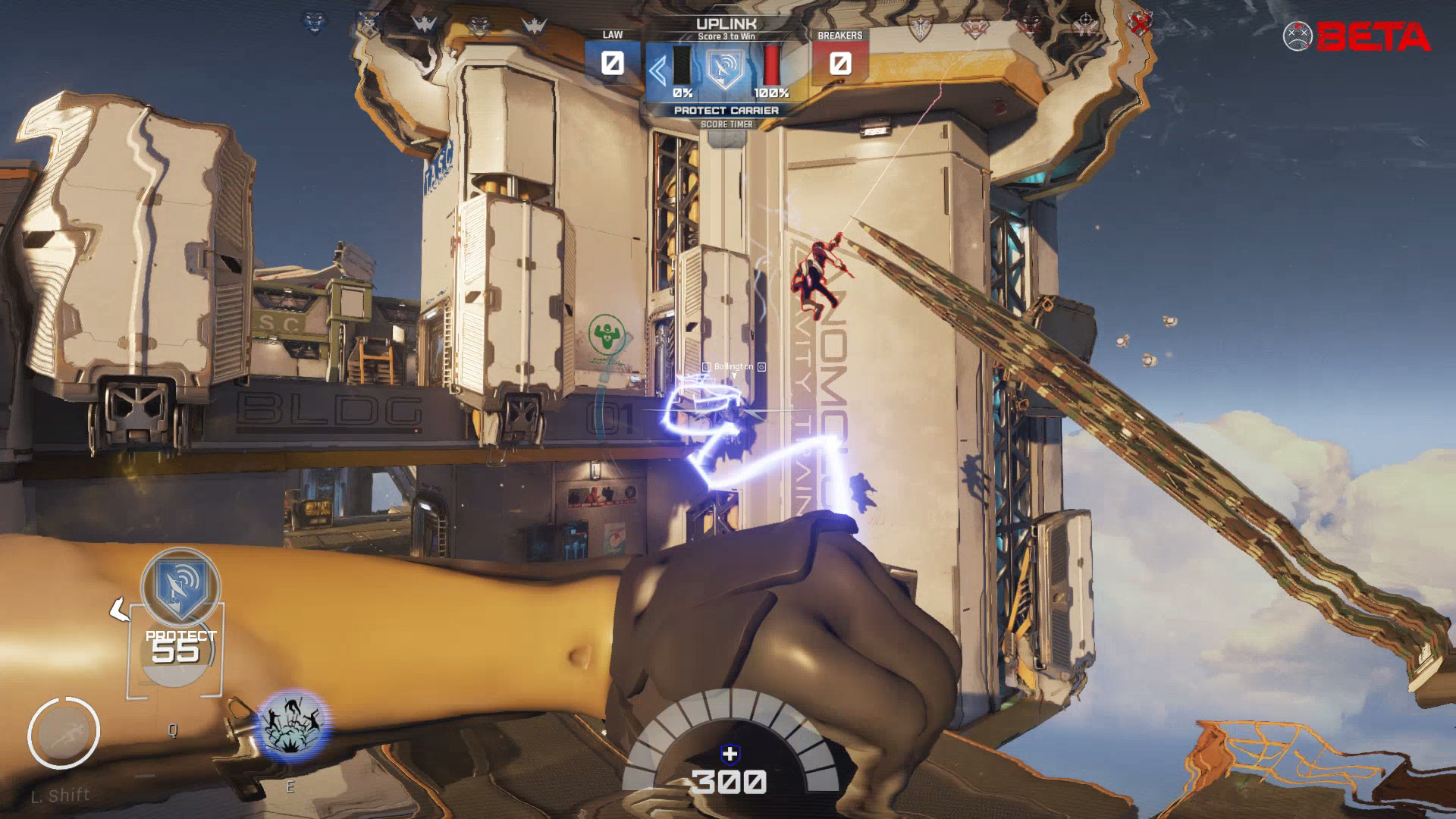 To differentiate themselves from the mass, most successful games bank on unique features that set them apart. In the case of LawBreakers, it is the gravity defying areas. In many First person Shooters, there have been separate servers with low gravity to have some fun with high jumps and aerial play. LawBreakers fully integrated that in its design as there are areas – mostly chokepoints at the center of the map – with localized low gravity and tangible momentum, giving room to aerial combat and vertical gunfights. And that’s where many other game mechanics shine even more, such as the ability for every character to shoot behind themselves. In a low gravity area, even slow characters can use that feature as a way of propulsion by firing a rocket behind. And it’s cool. 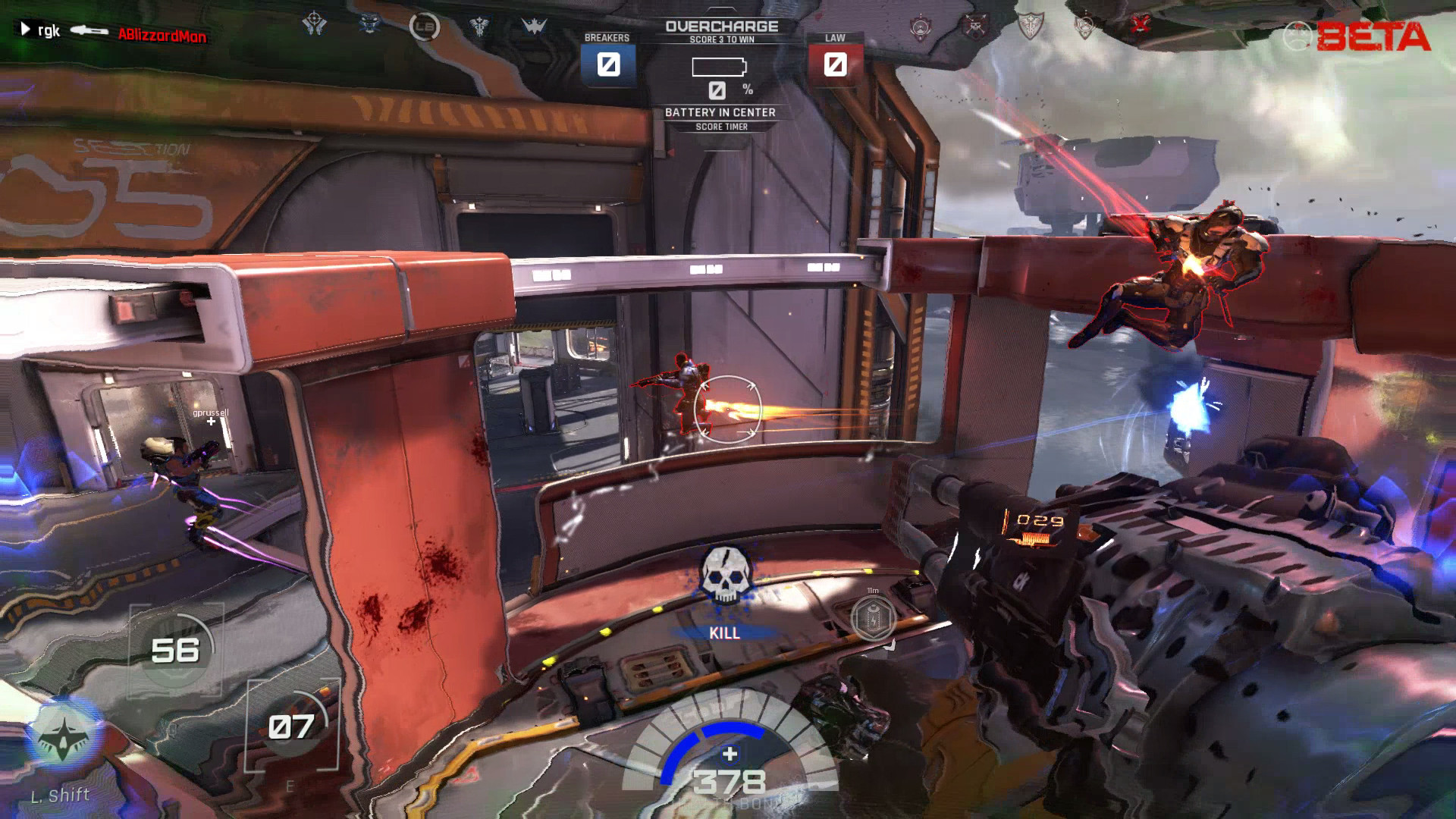 Playing LawBreakers instantly feels cool. The movements are exhilarating, the weapons are efficiently deadly, and there are no frustrating elements to frustratingly rain on your parade (there is no actual sniper rifle). I only regret the lack of feedback with melee weapons, sometimes I slashed people that were on the side of my screen and I would not have realized that my blade connected without the kill icon appearing on the middle of the screen. The characters are very well balanced between movement, health and damage output. For having played Quake Champions, I can clearly and unashamedly say that I preferred LawBreakers. Quake Champions has a new coat of heroes that bring imbalance and variation to what was a well-oiled formula, a formula of respawning with low-tier weapons while a god of the arena looms over you and slaughters you before you have had a chance to find something potent enough to retaliate; having an ideal loadout with armor and several types of weapons can only be done after wandering about in a maze-like map. The only way to start having fun is to become a god of the arena yourself. Sure, it can be done after painful efforts mastering the maps and the peculiar movements, but then there is nothing really new under the sun that made it worth the effort. 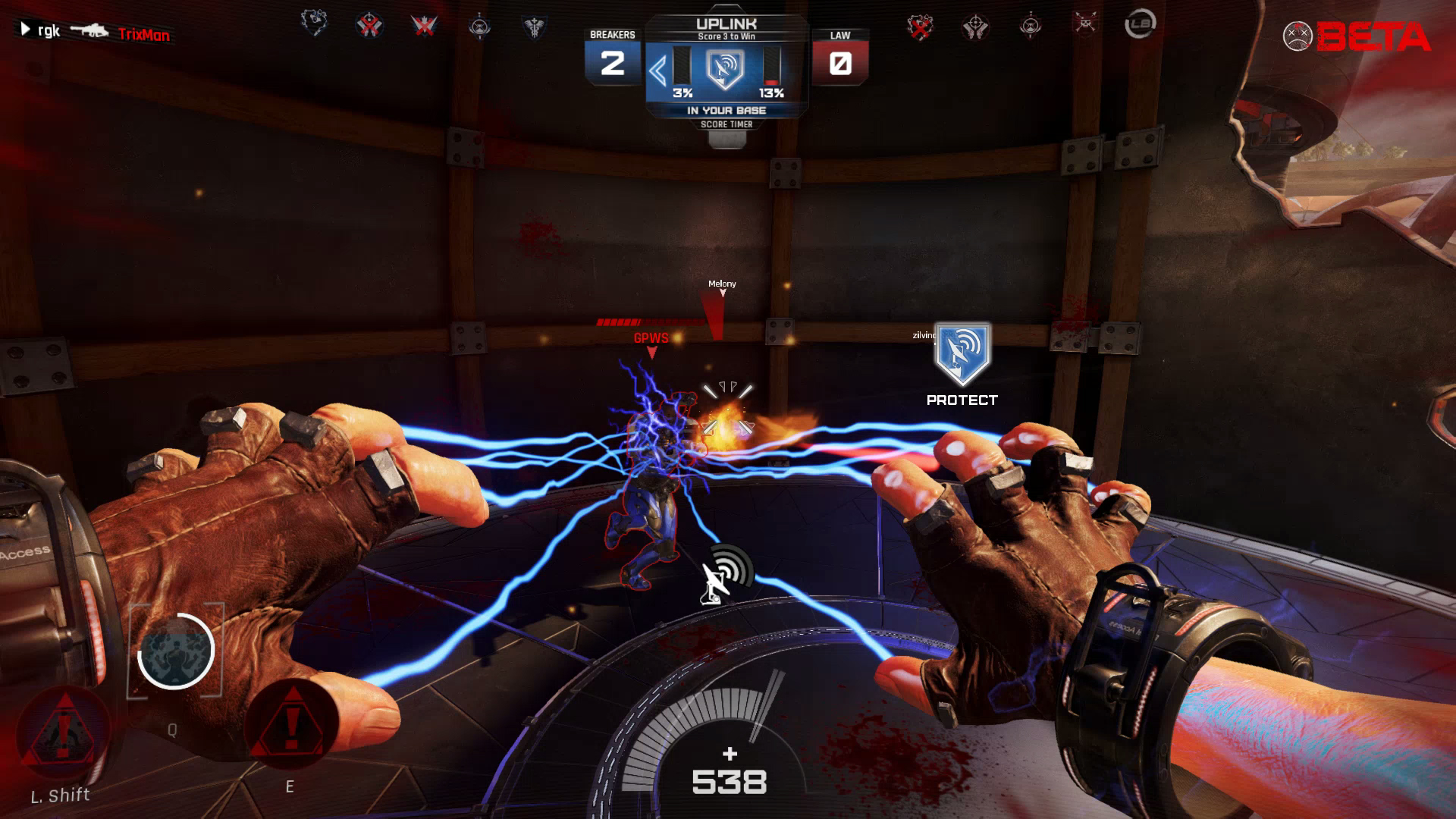 LawBreakers is not exactly ground-breakingly new, but it remixes existing elements in a way that makes them unique and fresh. Take the game modes for examples. There is some kind of football with a ball to capture and score in the enemy goal. There is a fresh take on domination with three points to capture and control for a few moments before they get temporarily locked. There is some sort of Capture the Flag with the flag being a battery that has to charge enough time in the base before scoring a point. Each of these game modes has its own dynamics and ways to bring tension. The maps are a joy, very easy to read and small enough to concentrate the action and not get lost… however this also means that one single great player using a fast character can completely dominate the opposite team, unlike the heavier reliance on team efforts in a game like Overwatch. But even though LawBreakers proposes a fresh take on old game modes, it still does not provide the experience of the “Assault” game mode from Overwatch and Team Fortress 2. Sure, there are temporary situations of attack/defense when one team is charging the battery, but it lacks the tension of progressing through a map and bringing the fight to a new chokepoint. This is what might eventually be LawBreaker’s downfall, as players get bored more easily of small symmetrical maps even though they are really well designed in LawBreakers. 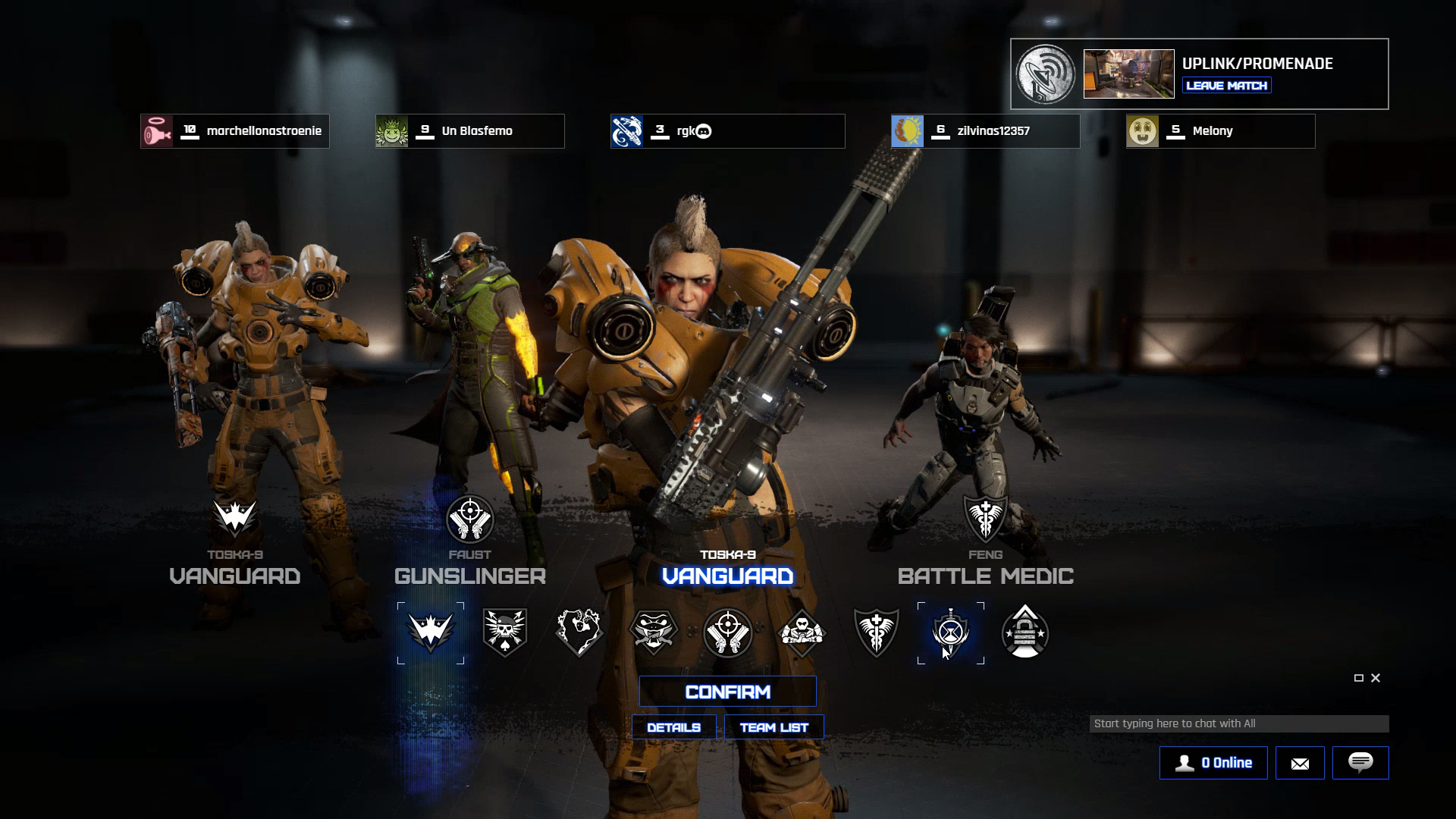 Put a bag on their face

Another reason why the game might not catch on is its art design. While this is a matter of taste, I found not to be the only one with this opinion. The color palette of LawBreakers is just awful, and the characters are beyond ugly. Visual appeal is part of what attracts a large audience, and LawBreakers seems to fail here. And finally, the economic model of this game is very similar to Overwatch with 30$ upfront then cosmetic loot boxes to find or buy. This is a very fair model, but then without the marketing machine of Blizzard I am not sure that LawBreakers will find success this way when other competitors are free-to-play, and there is no “Assault” mode or attractive heroes to draw in the crowds. 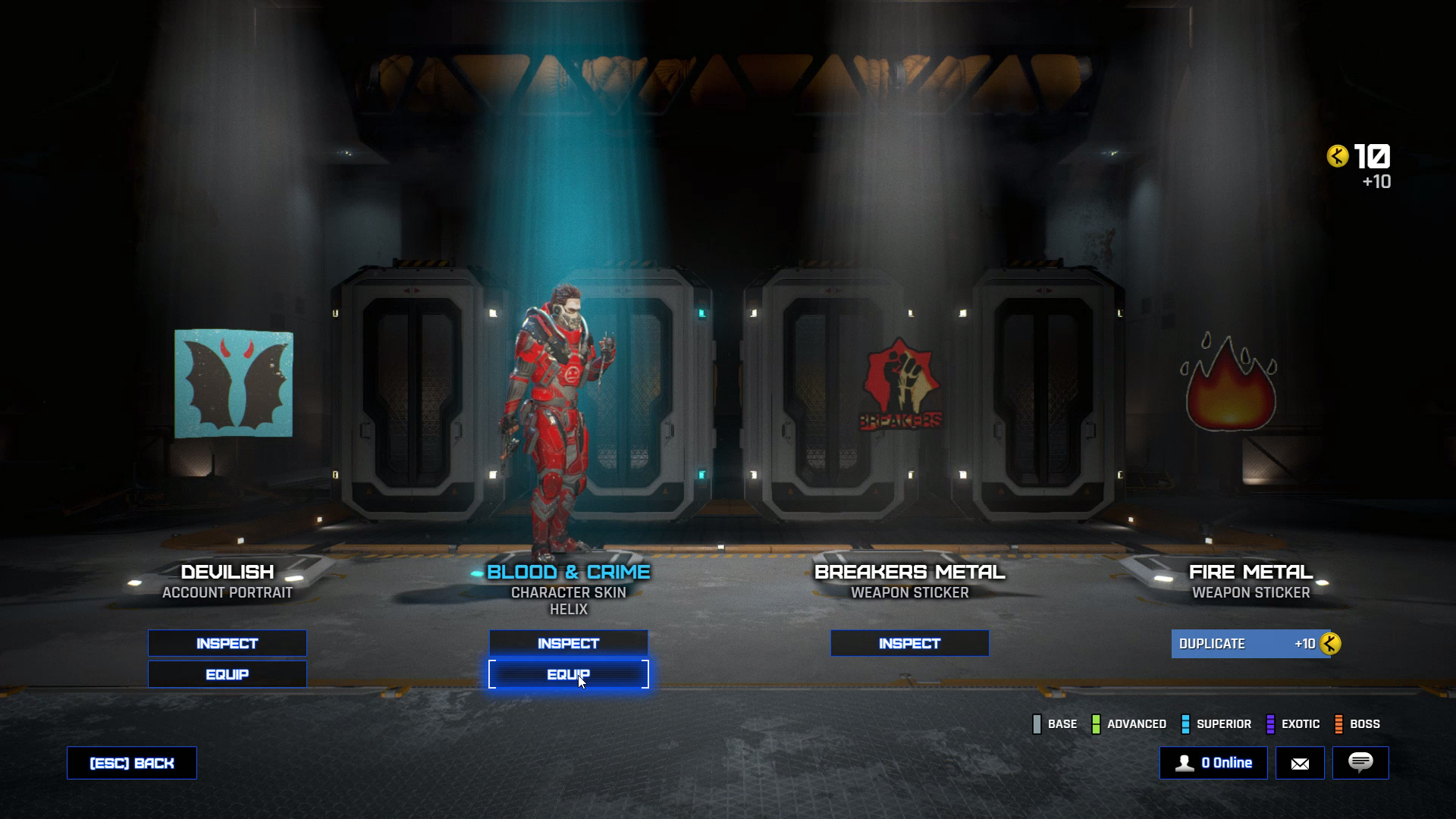 LawBreakers is clearly a good game. It runs well and has all the options to make PC players happy, the netcode is good, but most importantly the gameplay focused on fast-paced abilities and aerial movements is brilliant and instantly fun. This is a fresh take on Arena Shooters, bringing in elements from Overwatch… but somewhere along the way, LawBreakers forgot to have “Assault” with clear objectives for one team to attack and one team to defend. The game modes and the maps that are present are great, but that is still one step behind the competitors that successfully evolved from their Arena Shooter roots. And finally, the art design is not very attractive. I recommend you try this game as soon as possible, because I am not sure that it will hold the length and remain played in a year or so.