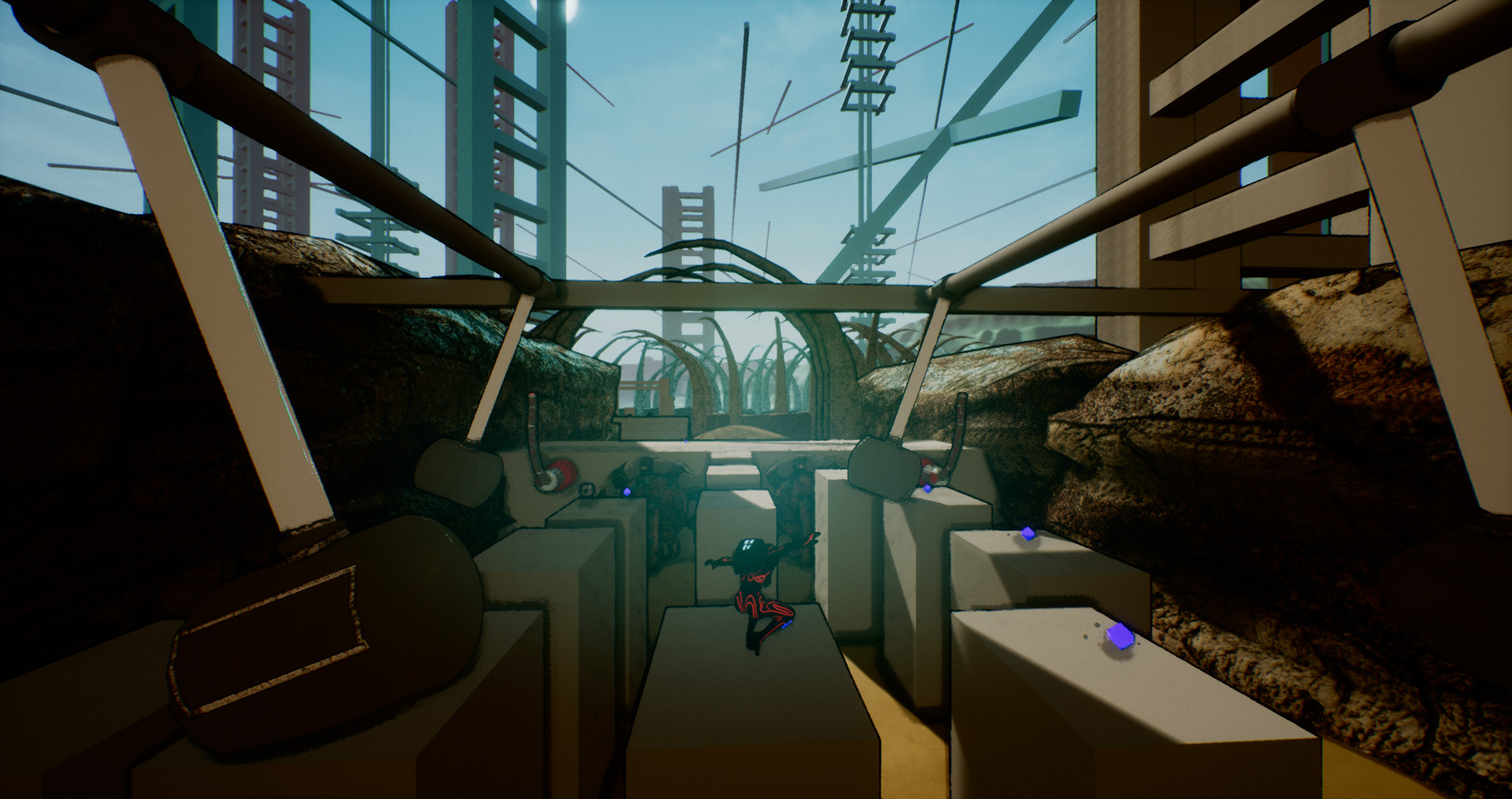 Langoth is a minimalistic 3D platform / exploration game. The title starts by stating that our world the “real world”, is nothing else than an incredibly advanced simulation, which now has been corrupted by an unknown virus, so every sentient living organism has been wiped out of existence, leaving only distorted and corrupted fragments of the world around, slowly being consumed altogether by the advancing infection.

In a desperate attempt to recover the invaluable data of the simulation, which contains all the info about millions of years of evolution, a superior being from the race of the creators of the program itself is sent inside the corrupted simulation, and tasked to retrieve as much data as possible, fight the infection and ultimately find a way out before everything is consumed. 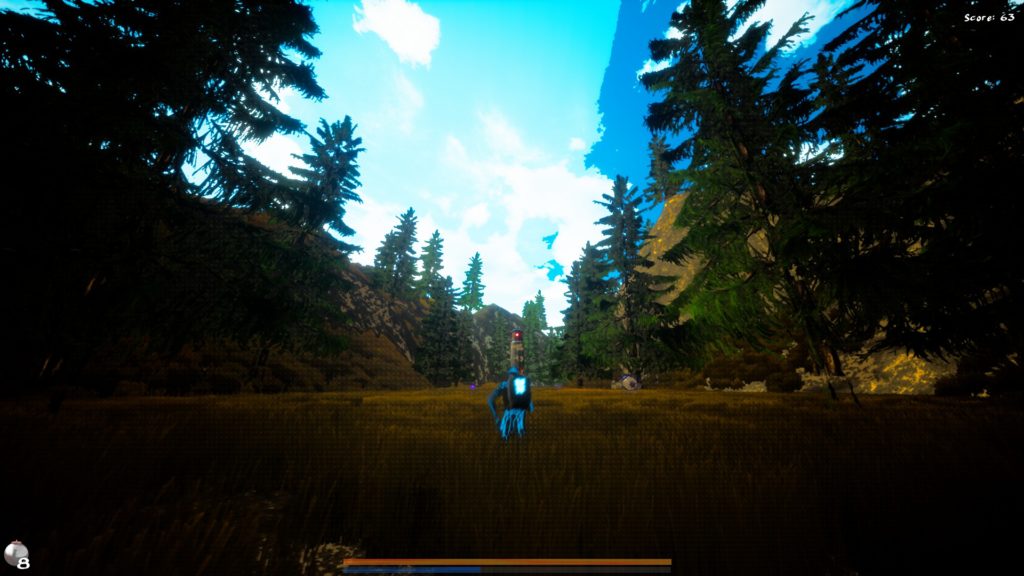 Langoth features a very classic and minimal gameplay style typical of any platformer you can recall to mind. There are two selectable characters, called Adam and Eve, different solely in appearence, the player will be able to use one of them for his journey. Once a character is selected, the game will very quickly dump the player in the corrupted simulation, without any explaination or tutorial whatsoever.

By trial and error, eventually you will find out that there are only three actions other than movement at your disposal: the first is to drop a bomb, by left-clicking, this will be your main weapon against the viruses, a timed bomb that will explode after 2 seconds in a small radius. Since viruses have only “melee” attacks (excluding the boss viruses), and will constantly follow the player, bombs are ideal to be dropped while running away from the enemy. Killing a virus will give +1 to the global score, which is increased by collectind Data Fragments or as said before, killing Viruses. 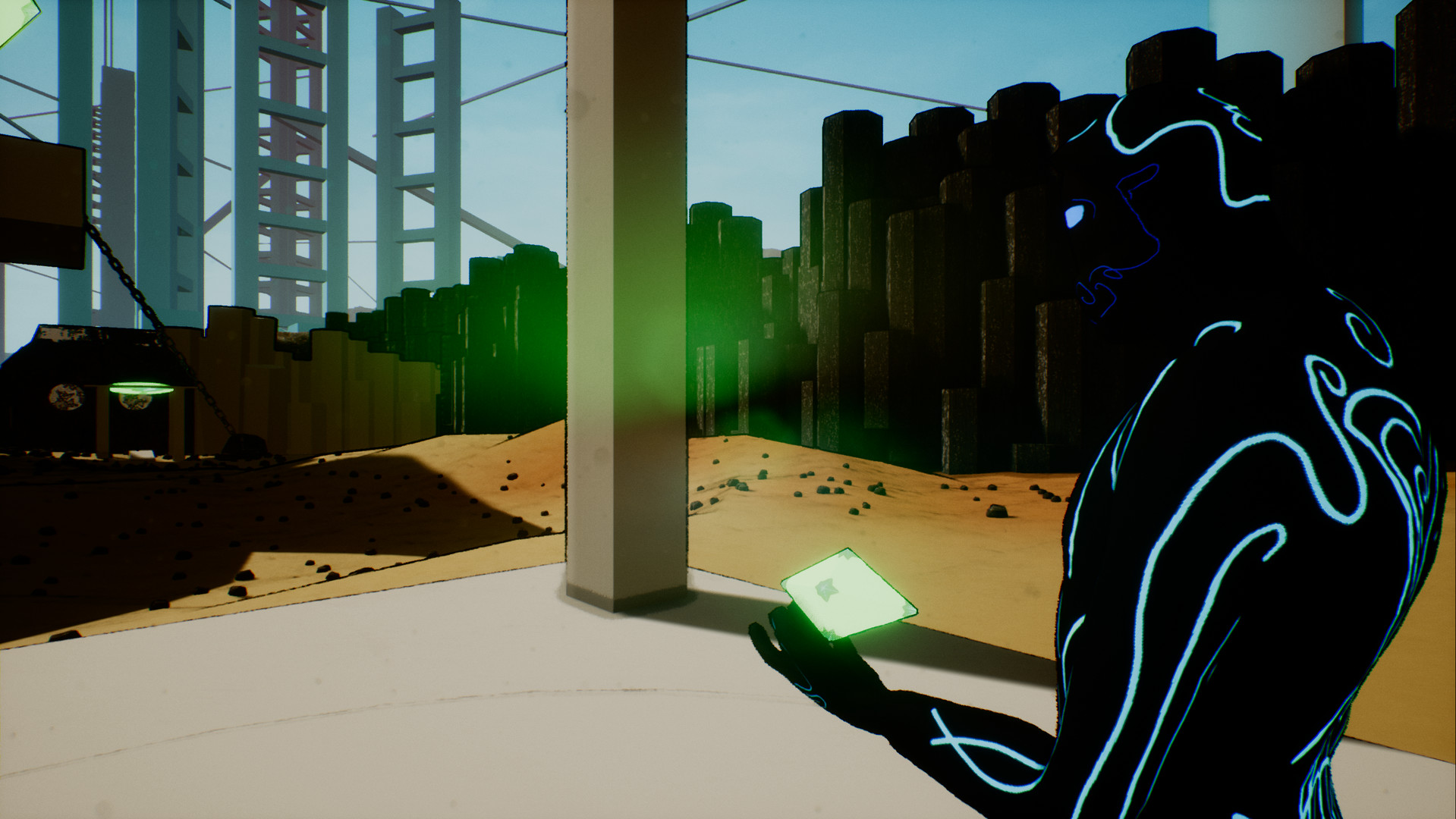 The second action at our disposal is a very strange looking (and sounding) “dash”, which will temporarely increase the player speed and give him the ability to damage Viruses by colliding with them, but does not give immunity to damage and consumes the Energy Bar when used, and VERY fast, so consider using Bombs before using this attack.

The third and last action is obviously the Jump, fundamental in any platform. A special mention must be made to this kind of jump though, which retains momentum and has a pretty accurate calculation of kinetic-related physics, which is by the way totally useless and honestly not appropriate for a Platform game.

The main activity the player will engage will be to explore the empty, corrupted world populated only by Viruses, collecting as much data as he can and going around to find the next Chackpoint Fountain, a greenish circular object which will act as a progression milestone once in a while in each level, and gives the player a Checkpoint where he can start back again if killed. There are three kinds of collectibles around, the first are obviously Data Fragments, which will replenish a tiny bit of Energy and a minuscule bit of Health, the second pickup are Bombs, spherical metallic looking objects, and the last one are Health Kits which conveniently have the shape of a floating red cross, and are quite rare, they will give you a little bit of health. 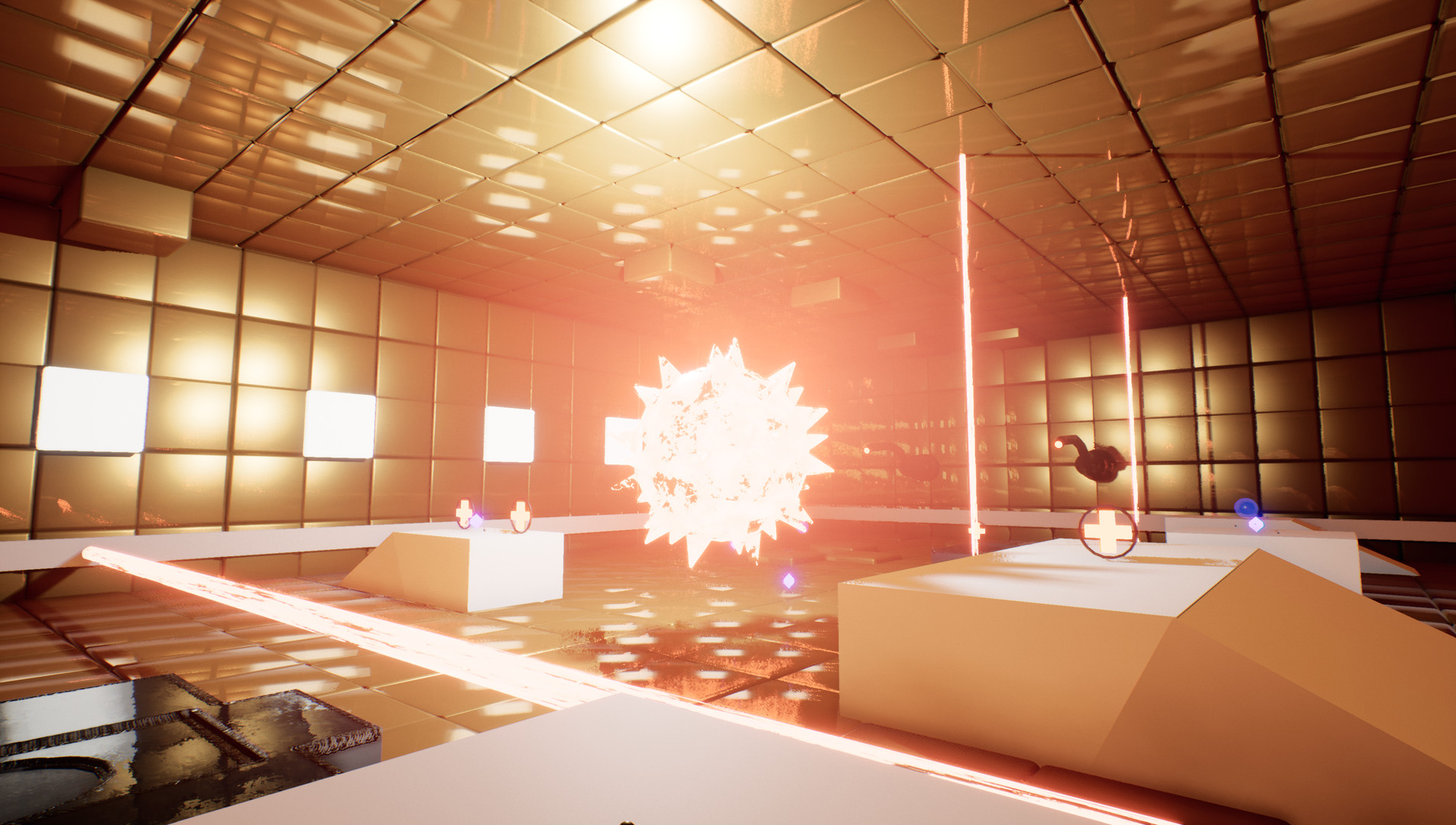 A note must be made, that fighting Viruses and colelcting Data, even if it is supposed to be the key quest of our character, is totally secondary and up to the player. You CAN complete the entire game by simply activating Checkpoints and rushing onward avoiding everything, it even happened me to entirely skip a Virus Boss fight, enter an oddly shaped portal, and find myself in another level entirely. Of course if you are a completitionist or you like to have a great score, you have to collect data and kill viruses, but that is not mandatory. Makes sense doesn’t it?

And that is all folks, i’m afraid. There is not much else to do in Langoth apart from exploring a desolated world, dodging the occasional moving trap, and collecting purple Data fragments, there are no power ups, no different types of enemies, (apart Bosses which are VERY rare, stationary turrets throwing bombs on the ground at a ridiculously tiny distance, but have really a ton of Health Points and give nothing beside Points as reward for defeating), the world is really empty and static, there is zero interaction with anything, it does not give the urge to explore to the player, which is fundamental in a game like Langoth is. 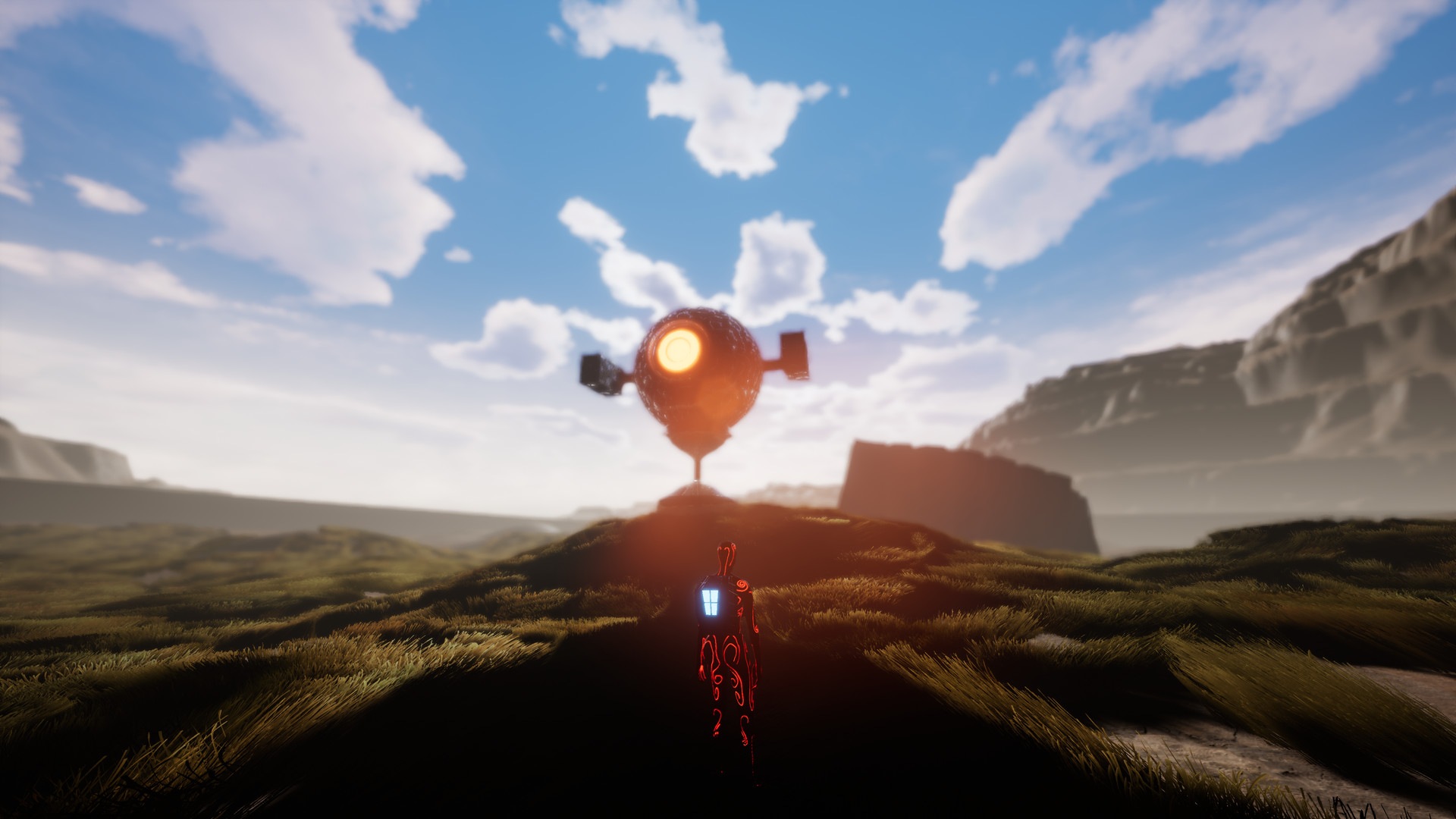 There is also another mode apart from Story, which is Arena, it consists in a Base Defense mode, where you are at the center of a large arena, enemies will come from all sides, and you will have to defend, alone, a tower in the middle, which will continuously spawn Data Fragments and Bombs to give you means to defeat enemies. If you die or the tower is destroyed, you fail, and it goes on until one of those things happen.

Summing up, Langoth has a good starting idea, the setting and the story incipit are quite interesting, but then the aactual game has been made uninteresting, bland, stationary and unstimulating by a very minimal and uninspired type of gameplay and unjustified lack of general content, which really take away much from this title. To be very honest with you folks, this looks more like a Unreal Engine 4 Demo than a finished game, not only from the lack of content but also from the lack of general polish in multiple aspects ranging from level design to animations to AI interaction. I will discuss this better in the next part. 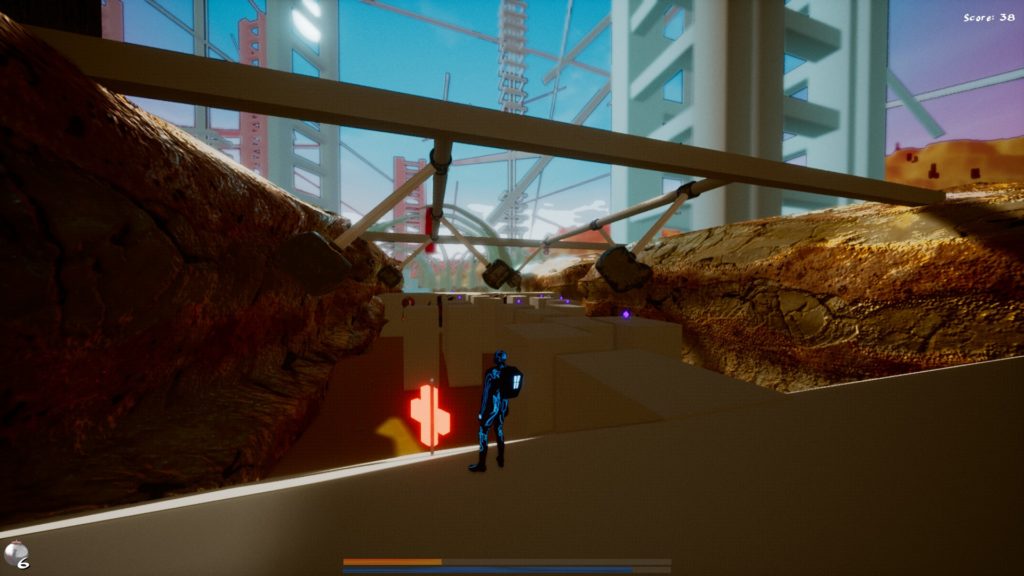 Langoth uses Unreal Engine 4 as graphics engine, and this means two things: the graphics will look good no matter how bad you make it, and that the game will be heavy as a ton of bricks. And it is exactly what happens with this title.

Graphically speaking, for being UE4, Langoth does not have a good graphical level. Not at all. In the distance, you can see shaders creating very strange effects of distortion and models popping in and out, polygons distorting oddly, and generally not giving a good impression to the eye. Everything in the world is coated with a very strange glow, almost as if any surface has been included with a wetness shader. You will notice very odd reflexes and light/shadow patterns especially in the very first areas of the game. 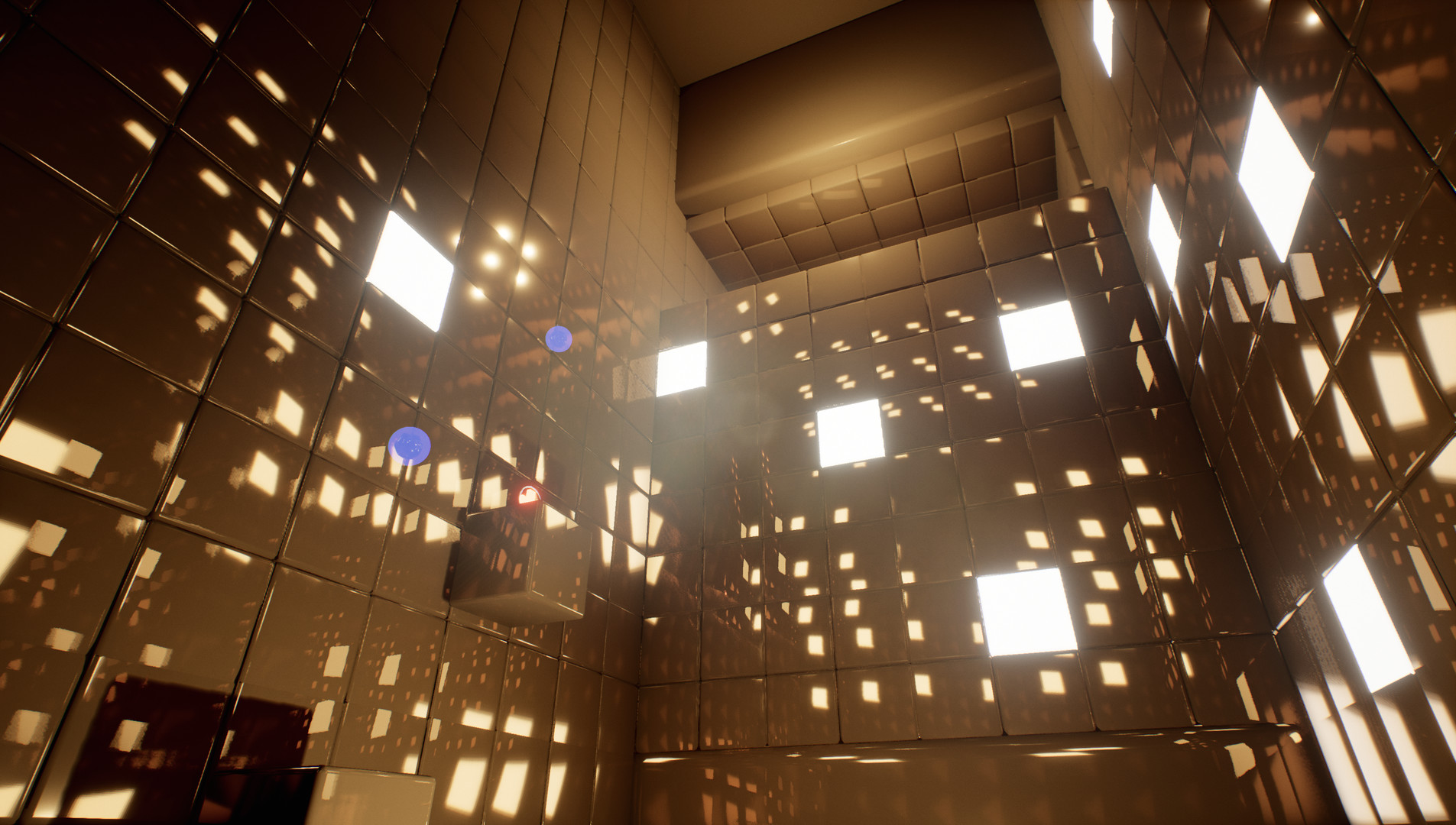 Textures and models are of alternating quality and design, ranging from very simple to even good quality ones, fact is the world does not really blend well together, many props and models look like to have just been put there and to not belong to the worldspace they are in, this could be justified by saying it is a corrupted world and a simulation, and maybe it was the idea of the developers to make it look like this, but sincerely, did the egg or the chicken come first? We will never know.

As mentioned in the gameplay, it was a really BAD idea to leave the default UE4 physics library turned on and give jumps inertia and mass calculations in a platfromer game. Jumps in this game are very inaccurate, very frustrating to attempt and as if this was not enough, collisions (hitboxes, platforms collisions, player collision models) are very rough and more than once you will die / fall / get stuck because of this. 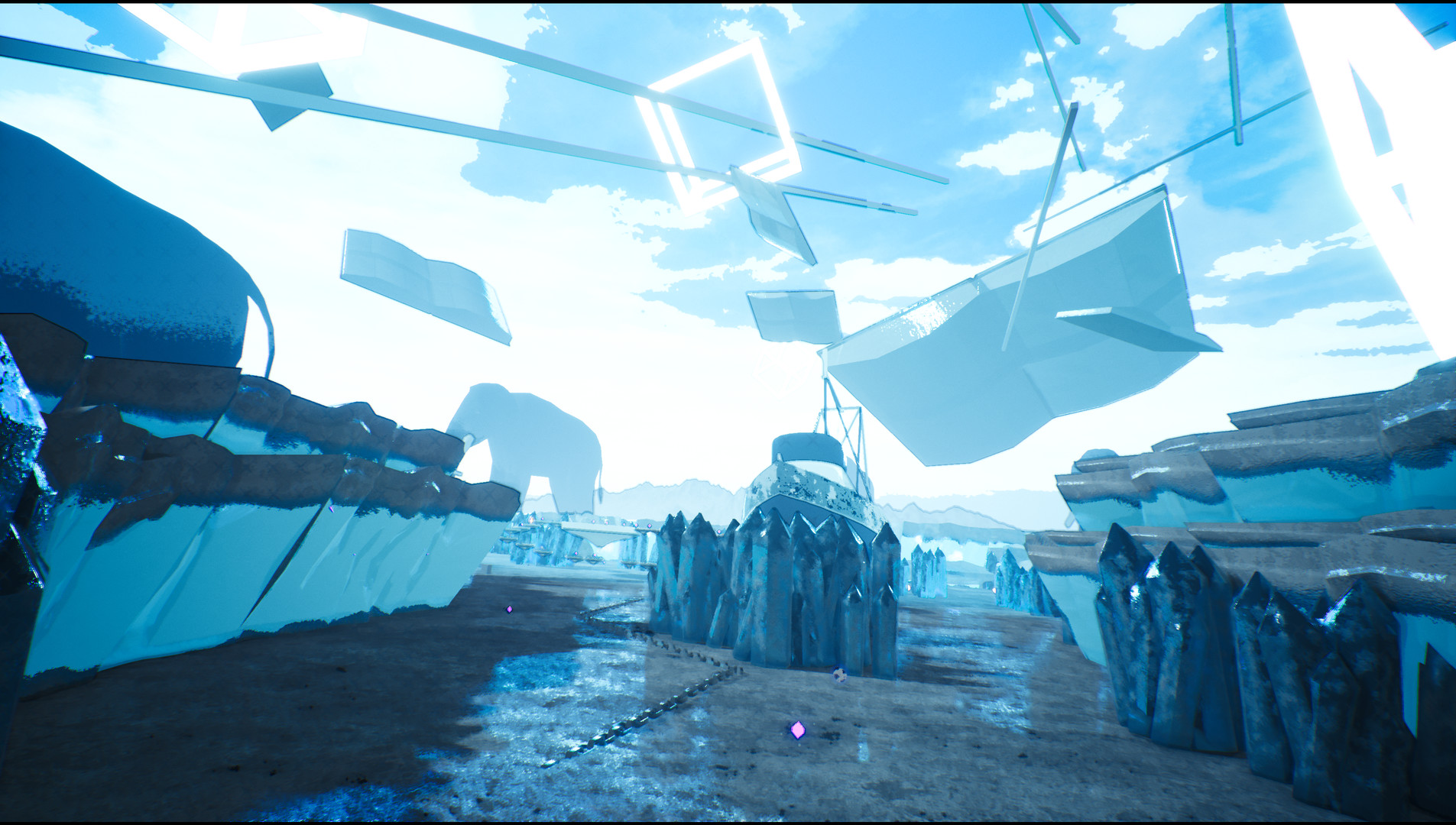 Bug-wise, the game is RIDDLED with problems, unpolishedness and rough edges. In more than one occasion it was possible to skip a large part of a level by glitch jumping on some world objects and get on the other side of a supposedly not passable point of the map, only to find ourselves stuck because we did not activate the previous checkpoint leading to that area. Also, isf the menu is opened in game, you will not be able to exit it anymore! It will stay there even with the game running in background of it, forcing the player to restart the game to fix this issue.

Speaking Performance-wise, for the graphics delivered and the general quality, the system requirements are out of this world and totally ridiculous. To max this game, as stated in the Steam store page, 12 GB of ram, a 4th generation i5 and a GTX970 would be needed. I won’t add anything else just make you own conclusions.

The title does not suffer of major performance problems apart from optimization as stated above, the only problem seen was a minor stuttering problem during a certain “Ice” level. 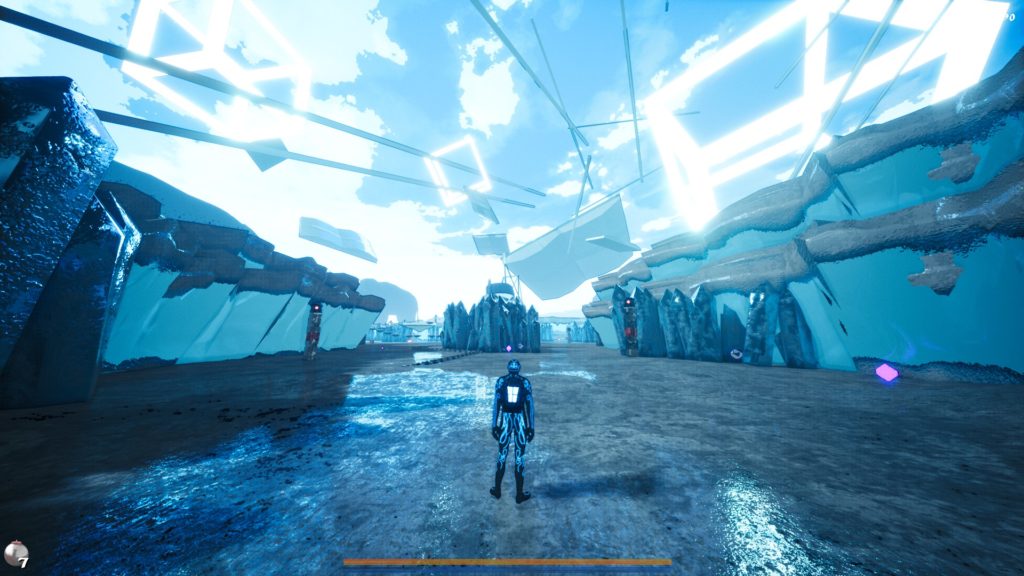 Langoth has a nice incpit and a mildly imaginative setting, but everything else about it is utterly ruined by the problems mentioned above. The core elements which would make a game like this at least quite interesting are completely lackluster and faulty. I do not recommend this title to anyone, if you are looking for open world platforms out there are many better alternatives. 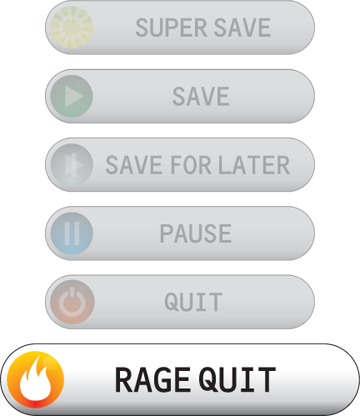