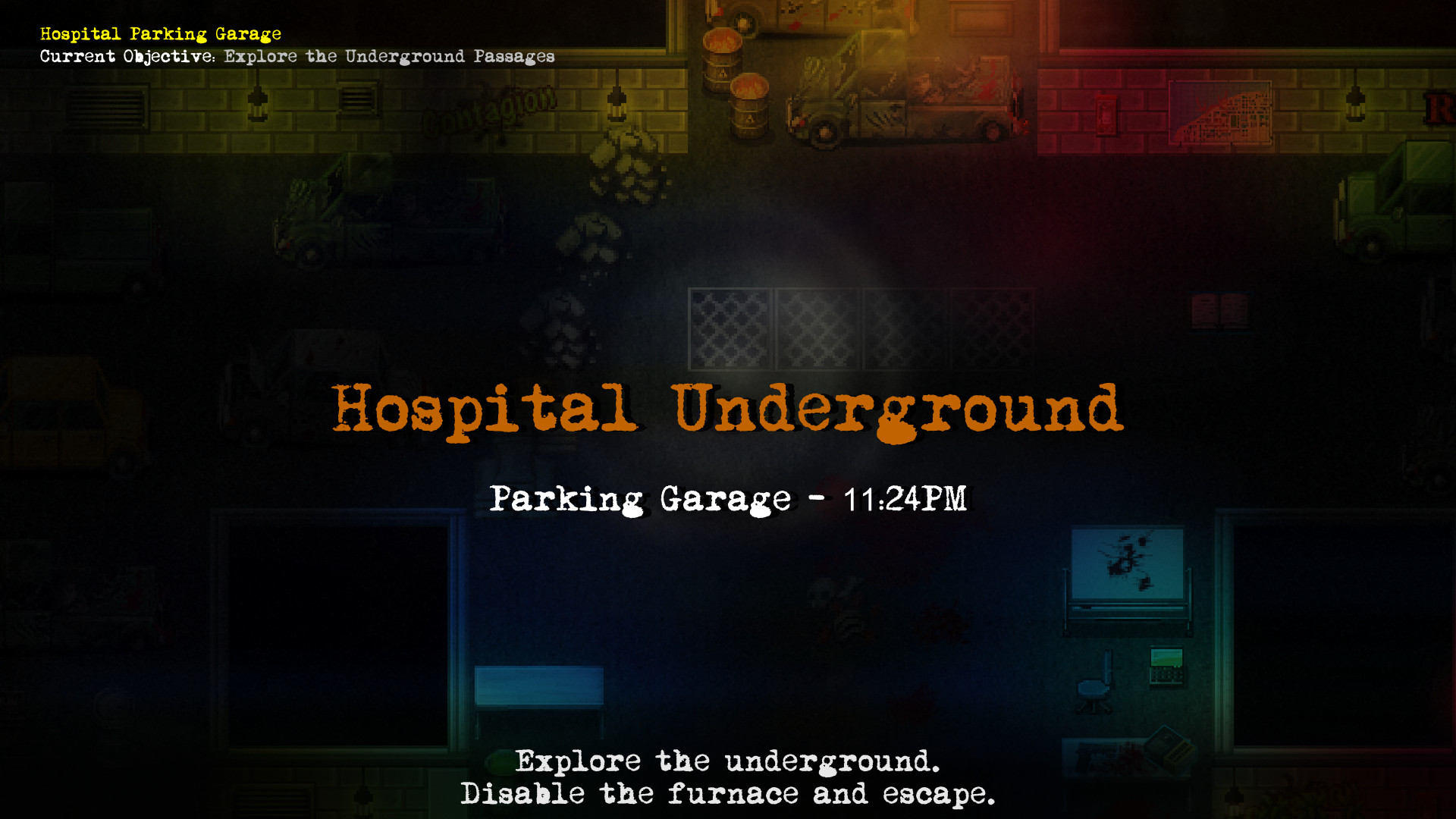 Outbreak is a top-down 2D survival horror / shooter. The game is set in the modern times, in a generic unnamed western city. Nobody knows how the pandemic really started, all people know is that the world is now full of undead monsters, made from humans and animals alike, and everyone must fight for their own survival… original isn’t it?

The player will be able to impersonate one of the four available characters, each one will have its own differences in terms of abilities and starting gear, however consider these differences are very minor, and will not substantially impact gameplay on the long term, like for example starting with a pistol instead of a knife or having a few more slots in the inventory. You are not necessarily alone in facing the apocalypse, as the game features co-op mode, which is exactly as single player mode, the only difference is that players will have less health points in co-op. 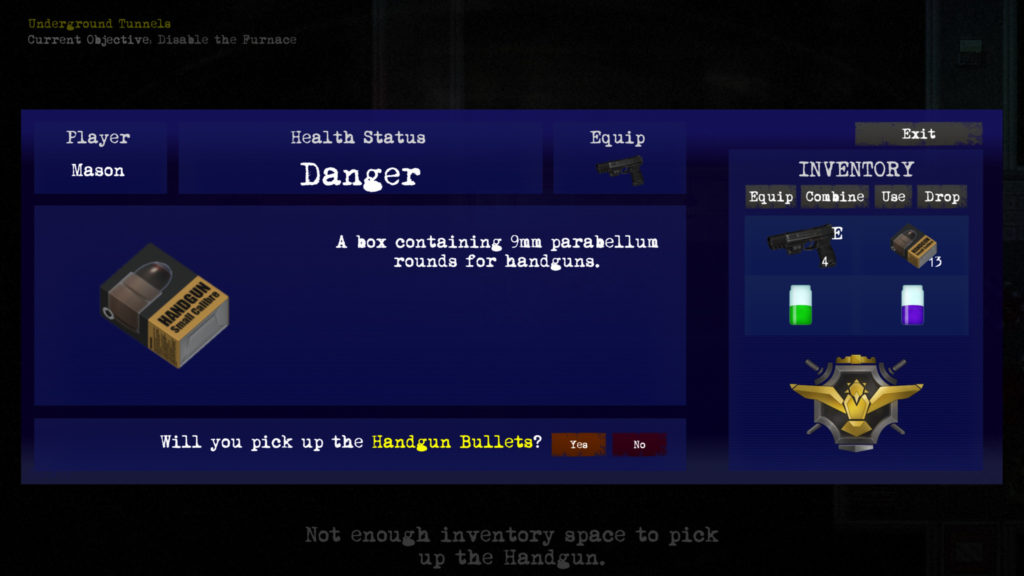 In each mission, the player (or players) will have only one objective: reach the extraction zone alive. In order to accomplish this, they will have to roam around the various levels in search of medical items, ammo, weapons and other items they will need to survive and reach the target. Around them, an endless amount of zombies and other monsters will begin to spawn, the fight for survival never really ends and resources get progressively more scarce as the level progresses, so time management and ortieneering will be essential to complete a level in the shortest amount of time, or else the players will be surely overrun by the enldess monsters.

The game features 3 levels of difficulty, which will make the enemies more resilient, inflict more damage, supplies more scarce and enemy increase enemy spawn rates. Even on the lowest difficulty, which is Normal, this game, we admit, is very challenging, as ammo and weapons will run out of use after a short time and enemies are very dangerous… 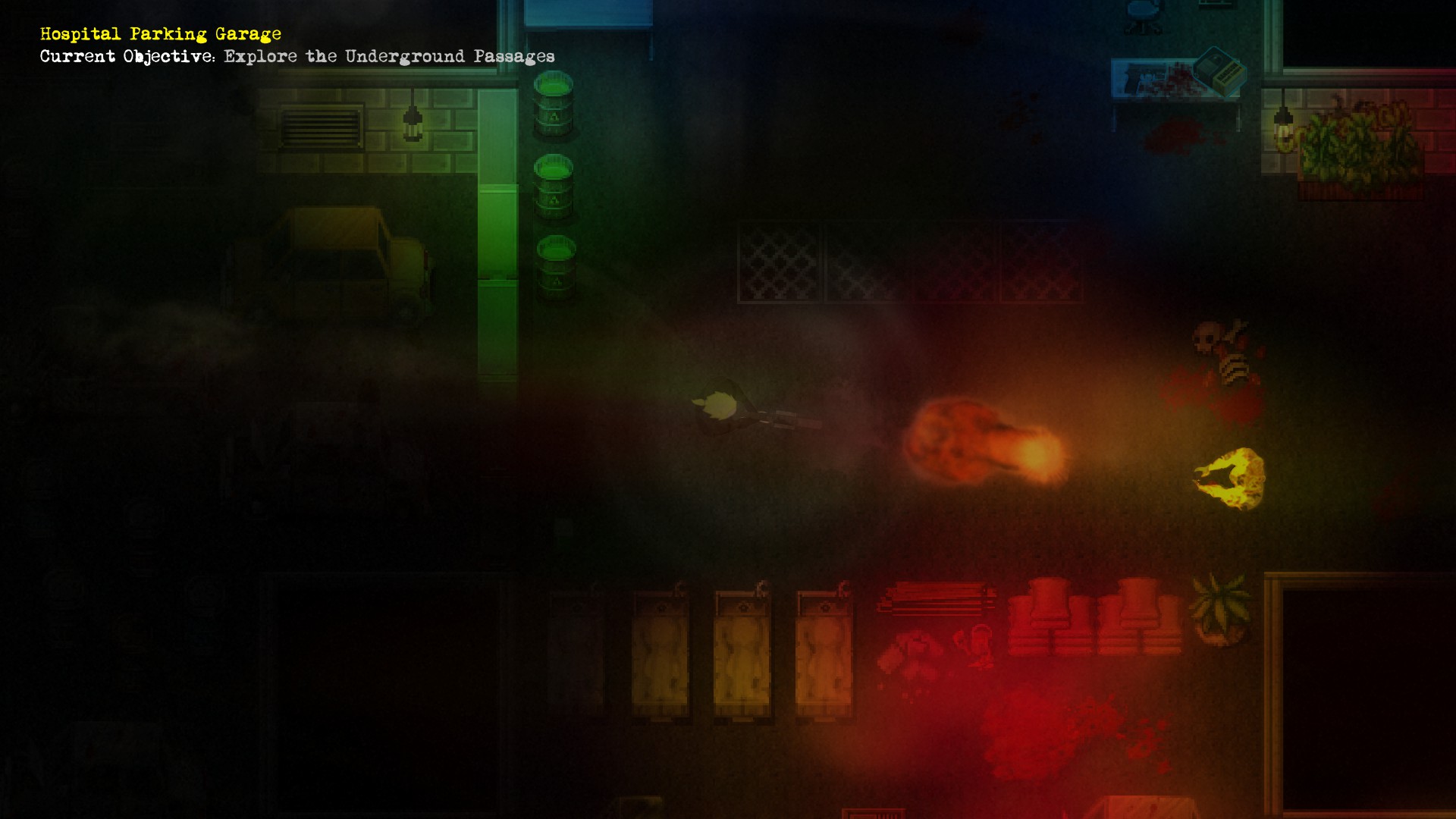 Speaking of other gameplay features, the game has an inventory, which is default 4 slots (!) (unless you got a character with expanded inventory skill), where items can be managed, dropped, given to a friend, or combined together to create new items, for example a Red Solution + a Green Solution will give out a Purple Solution, which will be a potent healing item (sounds familiar doesn’t it?). Also, the players will be able, each 60 seconds to magically spawn a concrete barricade (!) in front of where they look, to slow down enemies for a short time.

And that is pretty much it, no upgrade systems, no unlockable characters, no statistics to level up, no unique weapons or anything else, you get dropped in the mission, have to go around while fighting endless hordes of enemies, which really limits the exploration and immersion since you literally won’t have even a minute to look around… but wait, you don’t even need to, since every level comes with a map that not only is already entirely discovered, but also tells you the position of the Keys you will need to progress, what survivial horror done right would ever do this? None. And then rush to the evac zone, if you are still alive. 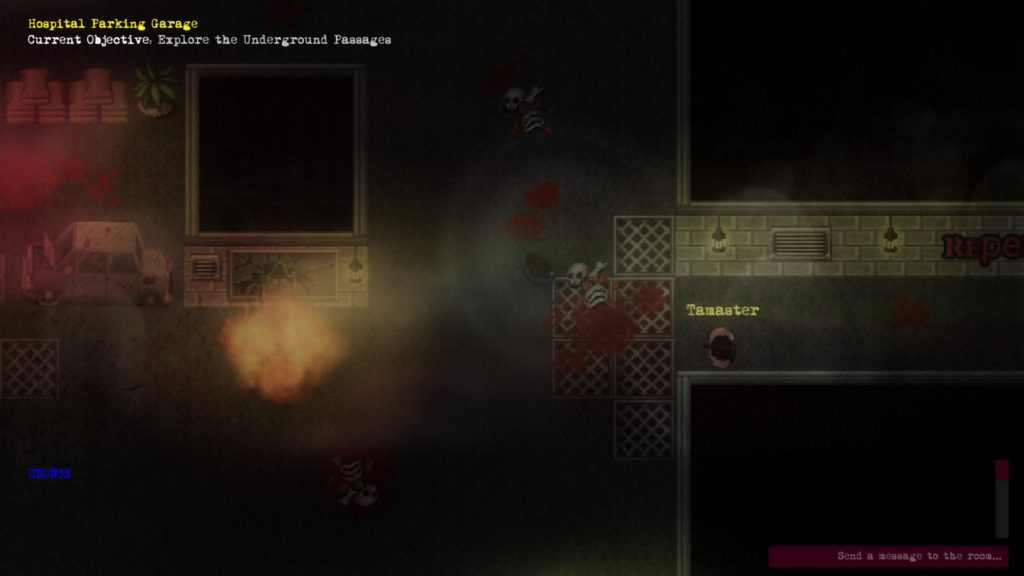 Technically, Outbreak is on very low standards for its pricing and the year it has been released, let’s start with this premise.

The most crippling technical flaw this game has is the control system, absolutely atrocious: it makes this title borderline unplayable with a keyboard, it does not get much better with a gamepad, because if it turns barely playable, you will soon notice the character movements are very unresponsive, clunky, the rotation time is very slow, running is barely faster than walking and you have to stop to fire your weapon. Yes, you cannot shoot and walk, when chased by zombies that is not very good.

Graphically, the game is barely sufficent, the pixel-style kind of retro environments are decent enough, but then it comes to notice that the characters the players impersonate are not made with the same graphical style, but instead loo like they’ve been made with MS Paint and really stand out in the style the game environment has been drawn, like they are something alien to that world and should not be there. Enemies have been made at least with some regard of the game’s graphical context, and anyway you won’t see much of them since it’s always very dark. 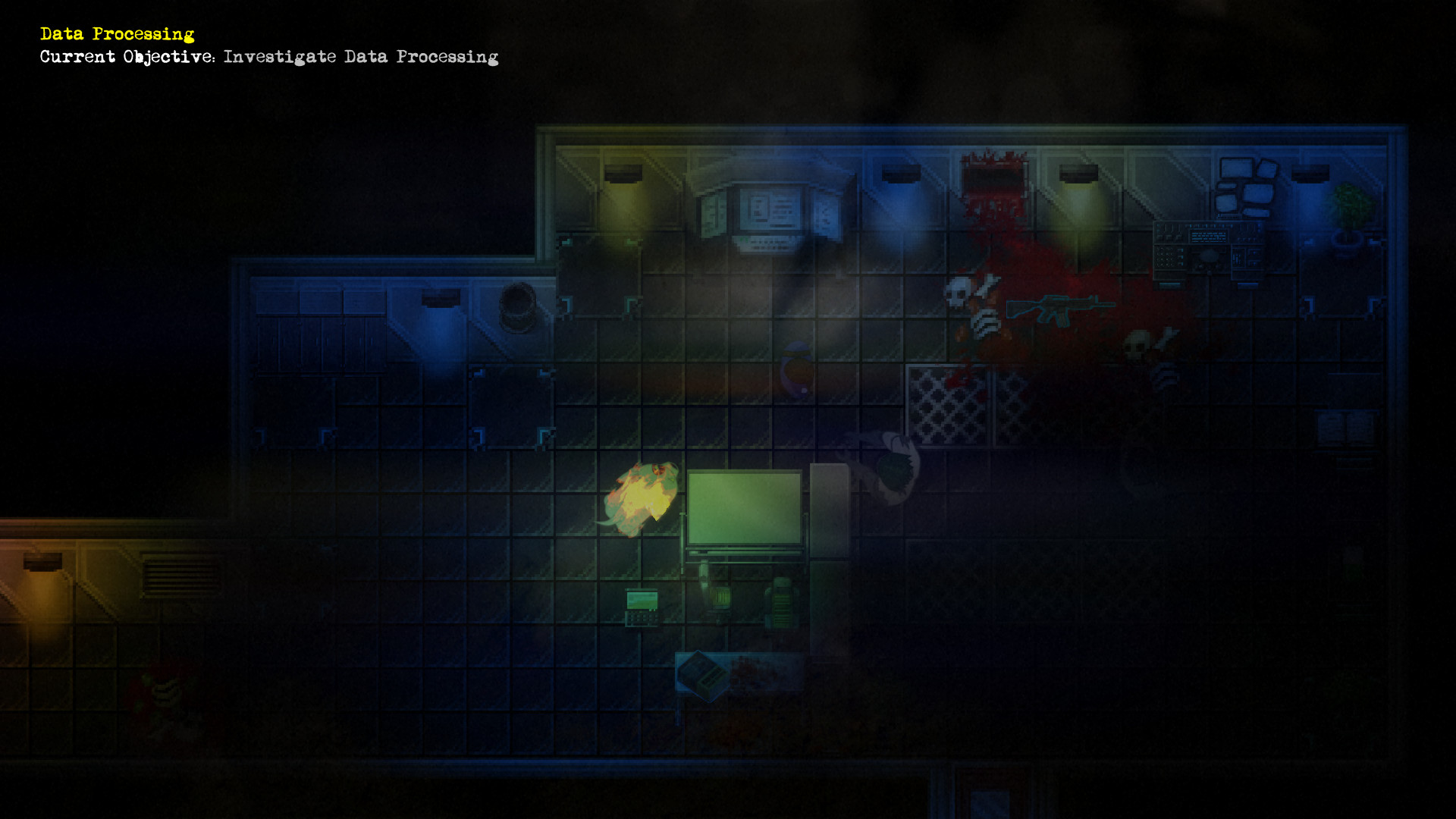 The effects are also not very good, when an enemy is killed you can distinctively see the square box of the sprite depicting the blood splattering animation around the enemy, and it is a damn SQUARE of gashing blood, you can see the contours of the 64×64 sprite box! I think this says enough for the overall quality of the effects.

For the rest of the graphics, there are no dynamic shadows, no modern light effects (the flashlight is literally a sprite with a high brightness spawned at a fixed distance from the player, a FIXED sprite that does not react to the environment at all), there is not shading of anything, no animations for doors opening or closing, they simply DISAPPEAR, enemies also do not have animations besides waling, they look as animated mannequins that rotate around the axis of their SQUARE hitbox. Rest in peace immersion. Want to know more? No, you don’t, but believe me there is so much. 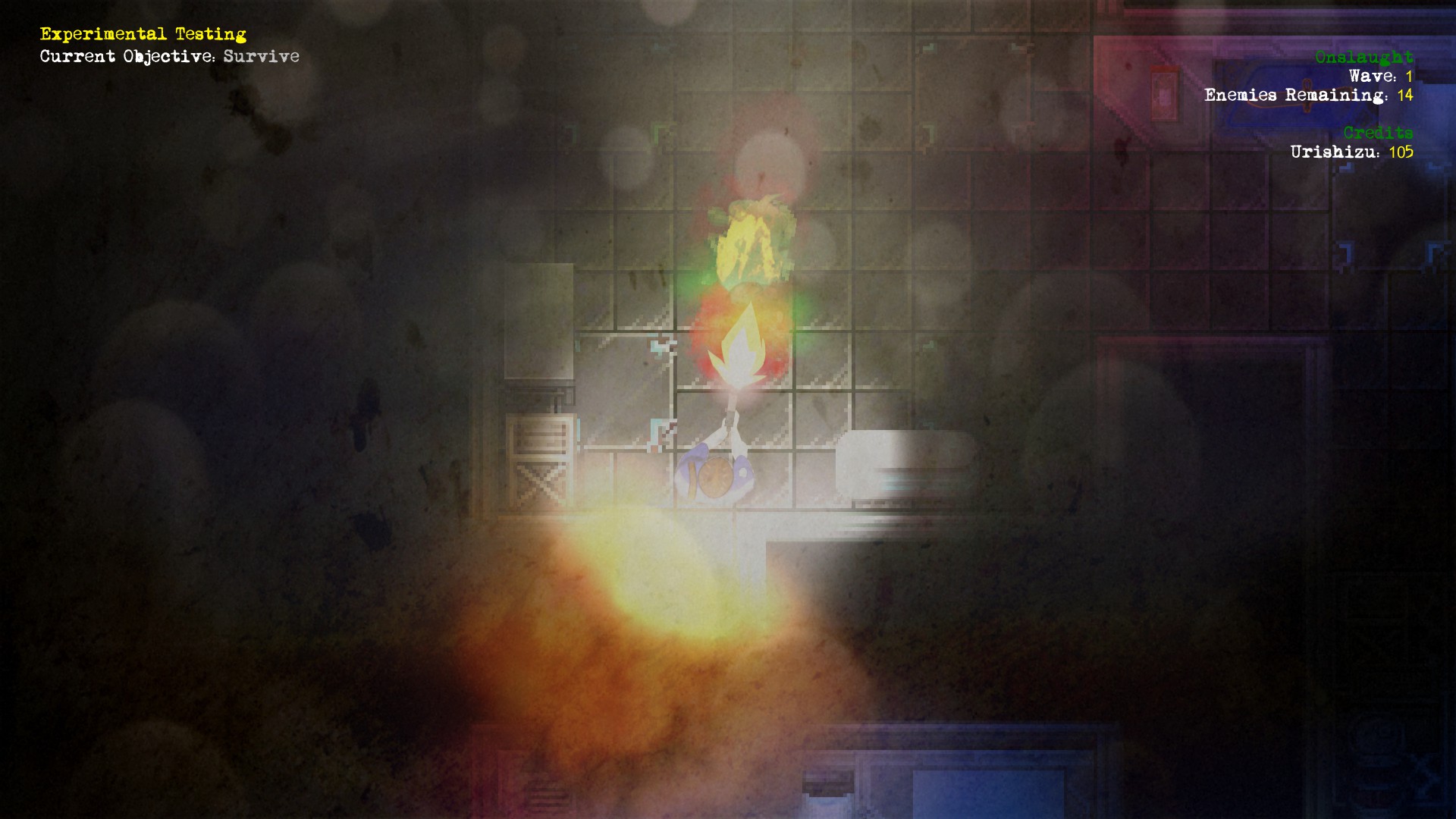 Outbreak is a bidimensional low budget ripoff of the Resident Evil series, i won’t sweeten the deal here. Gameplay elements are recycled as it is the storyline, the characters are anonymous and don’t have any personality, the setting is literally a generic post-apocalypse city with little to no background or explaination on how this all came to be, content is very limited and gameplay is flawed, repetitive and lackluster.

I do NOT suggest this game at all for this monstrous price of 17.99 euros (was 17, now it’s 15). This game is worth at best 2.99 euros at full pricing, and is only good if you want to play with your friends and laugh at its misery.