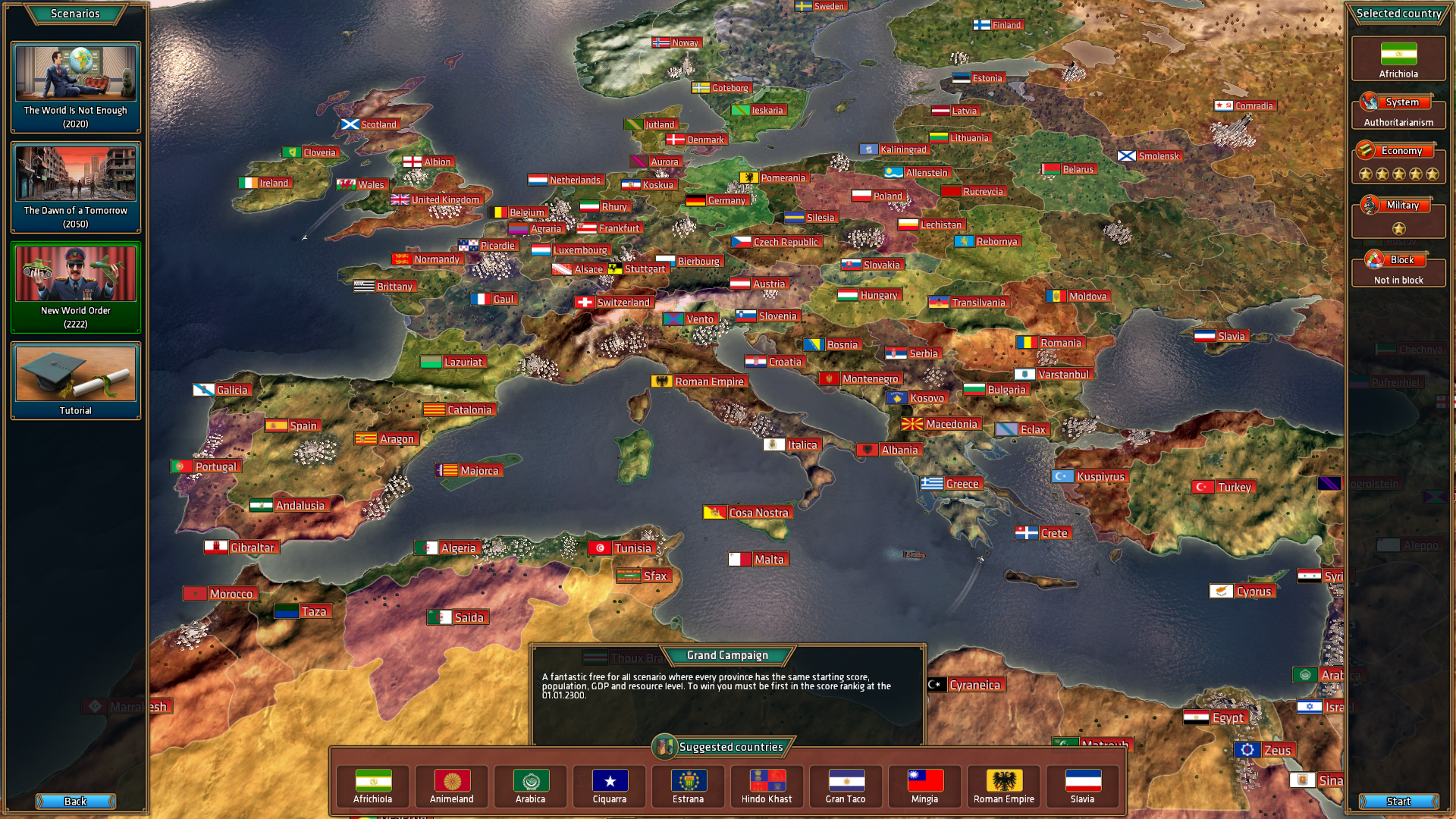 Realpolitiks is a geopolitical real-time strategy game with the ability to lead any contemporary nation found in modern times. Bolstered by a beautifully rendered over-world map and stellar event artwork, this new entry to the grand-strategy genre provides the player with active interactions in domestic and international diplomacy and a main focus on passive reactionary game play through real-world scenarios from epidemics to migrations.

Management is made easy by a clean user interface organized by a series of tabs and secondary windows. Music is lackluster at best due to a small selection of tracks and a collection of ambient noise that is better left to the mute button. The premise is great, the possibilities interesting, but the game begins to dwindle in appeal as the lack of interaction, poor difficulty and excessive downtime bring these negotiations back to the drawing board.

With most geopolitical games, terms differ from one another. Thankfully, a three part tutorial explains most of the key figures that must be managed along side a hint system explaining most actions during game play. Some components are glossed over, however, leaving the player to discover how to annex a nation on their own. In terms of the actual scenarios, three time periods make up the geopolitical selection: a modern adaptation of current powers, a distant future following World War 3 and a far future scenario. While every nation is eligible for the Grand Campaign, few nations also have access to special objective based campaigns (except in the 2222 A.D. Campaign). Most involve conquering certain countries such as Eastern Europe to rebuild the old USSR or the United States following a three way split, but some prompt the player to control certain planets or hold the highest GDP by a certain year. Unfortunately, each time period uses the same projects and the same major events, offering little variety outside the starting countries’ economical state, starting projects and military readiness. 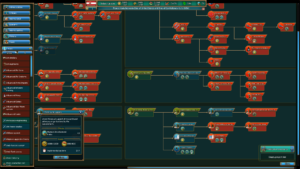 Projects enhance the political stature of the nation and offer improvements to military strength, project research speed (HDI), fighting sociological factors such as birth rate and unemployment, and enable the construction of unique structures, the nuclear program and the stock market. One project can take half a year to 6 years to complete with some requiring maintenance costs or inflated prices in correlation to the nation’s growth. Only two projects can be implemented at a time, making each selection critical to maintaining stability, ensuring proper military strength or having the economic backup to survive the main game play feature: events. Most are smaller fare that prompt the ruler to select the lesser of two evils (detention camps, election results, gay marriage), but some are unavoidable and can cause serious backlash. Nuclear accidents, housing collapse, civilian unrest and worldwide economic crashes are just a few of the situations that might be minuscule during late game play, but can be enough to send an unprepared nation into bankruptcy during the first few decades. Events make up the bulk of the game play in terms of active participation and are a challenge to deal with early game, but the right selection of projects can make end game boring due to the lack of applicable challenge. 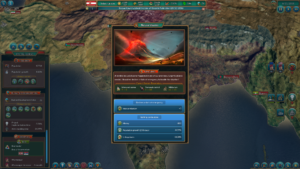 Events also have a chance to affect the type of government the player uses. Each government type has difficulties dealing with each other, but it also affects how nuclear warheads can be used, how often elections are held and how wars can be declared on other nations. Democracies have the advantage of a higher debt ceiling before declaring bankruptcy, but don’t have the freedom to deploy nukes at whim like the Totalitarian system. Authoritarians can request all provinces during negotiations, but have a negative relation modifier similar to the Democratic system. It is an ever changing cycle depending on the event results involving Militarism, Interventionism and Personal Control. All three factors also have unique projects associated with them to allow the player some manner of control. It is an interesting idea that made the game more difficult in terms of personal goals (try keeping China as a democracy) when events usually play in favor of real world counterparts. 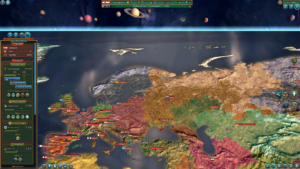 Alliances can be formed by forming blocs with other nations, essentially making it easier to defend against foreign invasion. This requires a high diplomatic relation with the nation in question, but it allows for the creation of special rules that provide unique benefits to population growth or GDP. Diplomacy boils down to helping certain countries during events, increasing reputation with specific nations and lowering reputation in order to declare war. Spies also come into play in order to lower bloc relationship status, lower happiness levels in a country to spark rebellions among the populace or attempt to claim core providence over a nation to make declaring war have less of an impact on general appearance. This makes up the bulk of active game play and boils down to right clicking a nation to select an option while monitoring their information tab. Diplomatic dilemmas prevent being friendly with everyone so war is an inevitably. 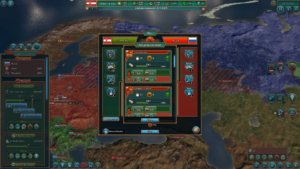 In order to expand borders, wars must be fought in a manner that keeps the UN on stand down or special conditions need to be met to annex a territory. Every nation employs the same basic units with most of the statistical bonuses coming from the Military project tree and environmental bonuses unique to each countries’ landscapes. Units are allotted from the total reserve and used to initiate operations that raise the total War score until one nation surrenders or peace negotiations are agreed upon. This is all done by clicking tabs and watching a meter rise while the army’s unit traits are tallied behind the scenes. Generally, the enemy falls back to using Ambush Attack (defensive operation) even when they are the attackers and it results in some very tedious engagements. Once the war is over, the nation can have territories liberated to decrease aggression levels (Warmonger), be forced to adapt a new political system or lose territories to the winning nation. This system is fine if the player decides to play defensively, but once the Warmonger trait becomes irrelevant in the late game the idea of conquering multiple nations becomes a chore. Declaring war is a good way to gain Score, which is the critical resource to acquire during Grand Campaigns.

All major actions award Score from successful spying actions to declaring war and completing special projects. By the end of each campaign, I found myself swimming in Score points that are required to achieve victory in the default Grand scenario. The computer has a tendency to stay ahead of the player during the first 20 years, but it is possible to find yourself 1,000 to 10,000 points ahead of the second place country by the time 40 years have passed. It falls back to the lack of aggression on the part of the computer, making the game surprisingly easy. Special funding events are also a primary factor to this lead, rewarding massive benefits and upwards of 100 to 500 score per successful action such as funding space exploration or hosting the Olympic Games. Most of these events are static, but others can be voted on by the UN. The UN also plays a role in peace keeping, allowing the player to enter conflicts with other nations if they have a joint coalition flagged. Regardless, the ease of acquiring Score mixed with the length of a standard game creates this giant void of activity and makes sitting through another forty years unbearable. If it weren’t for the option to speed up the game by two, I wouldn’t have completed the three Grand Campaigns I started. 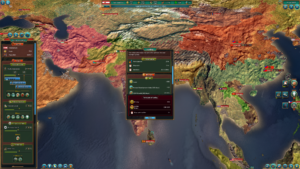 It is crucial to have a save file created yearly due to a couple of annoying issues that can decimate a play through. On a few separate occasions, the game decided to end a conflict I was engaged in and immediately start peace talks. This made it impossible to engage with the nation due to the lack of War progress needed to have the other nation successfully accept my demands. Save files were also refusing to load for a couple of my scenarios, preventing me from continuing with a game I had spent four hours playing the night before. I even ran into an issue where I still won the game in objective based campaigns without actually achieving the required conditions to beat it. Start up issues prevented the game from launching for me on two PCs and one lap top, but once I disabled the Steam Overlay, the issue resolved itself. Minor interface issues appeared in the form of the same event appearing seconds after each other, windows refusing to close, having difficulties selecting smaller countries and achievements not marking as complete. Most of the smaller issues I can accept or tolerate, but the save file issue is one that needs to be addressed. Thankfully the options menu offers the ability to auto-save monthly to yearly intervals.

My history with geopolitical titles is vast; Europa Universalis IV and Hearts of Iron III are two of my favorite titles and still garner my attention from time to time. I was hoping to find something with a little more depth and a greater focus on current world politics that could have made Realpolitiks stand out from the rest of its competitors. Unfortunately, the game is hindered by a lot of passive game play that creates a lot of downtime in-between the few relationships being managed and the funding campaign I have little need to pursue. The lack of punishment for certain actions (such as nukes) also feels out of place given the very tense nature of politics in the modern era. The computer isn’t aggressive enough to keep the player on their toes and the lack of any difficulty settings (outside the starting condition of your country) means the likelihood of playing against an energetic and war hungry Canada as the US is not very likely. There is enough here to be a great introduction to someone new to the grand-strategy genre, but veterans might be disappointed by what is on display. 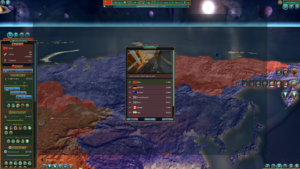