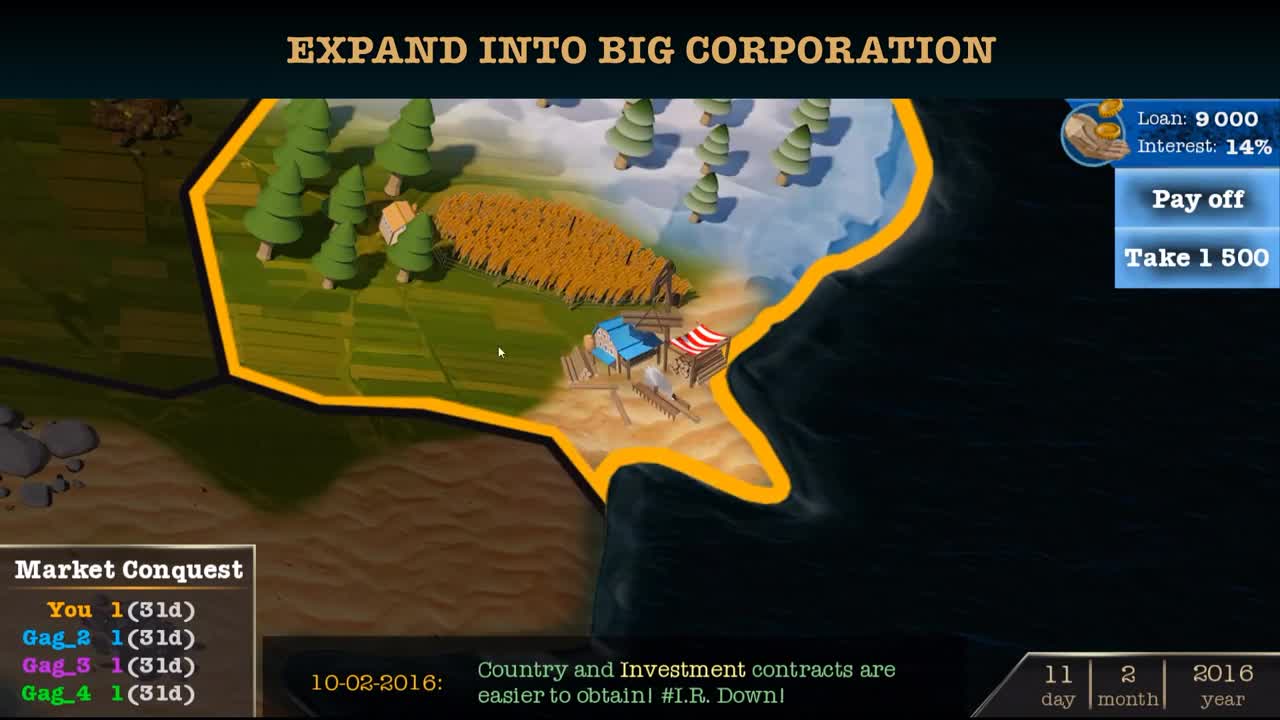 Economic Conquest is an economic strategy game developed and published by Frismos. This will mark the developer’s first venture into the Early Access program as well as their first Steam release. The game offers thirty missions with six of them representing the tutorial portion, which does a decent job of easing the player into the core concepts of the game. Aesthetically, the game offers a rural appeal with simple colors while the soundtrack is limited to a couple of looping tracks. Overall a great start to a basic strategy game, but maybe a bit too basic to appeal to everyone. 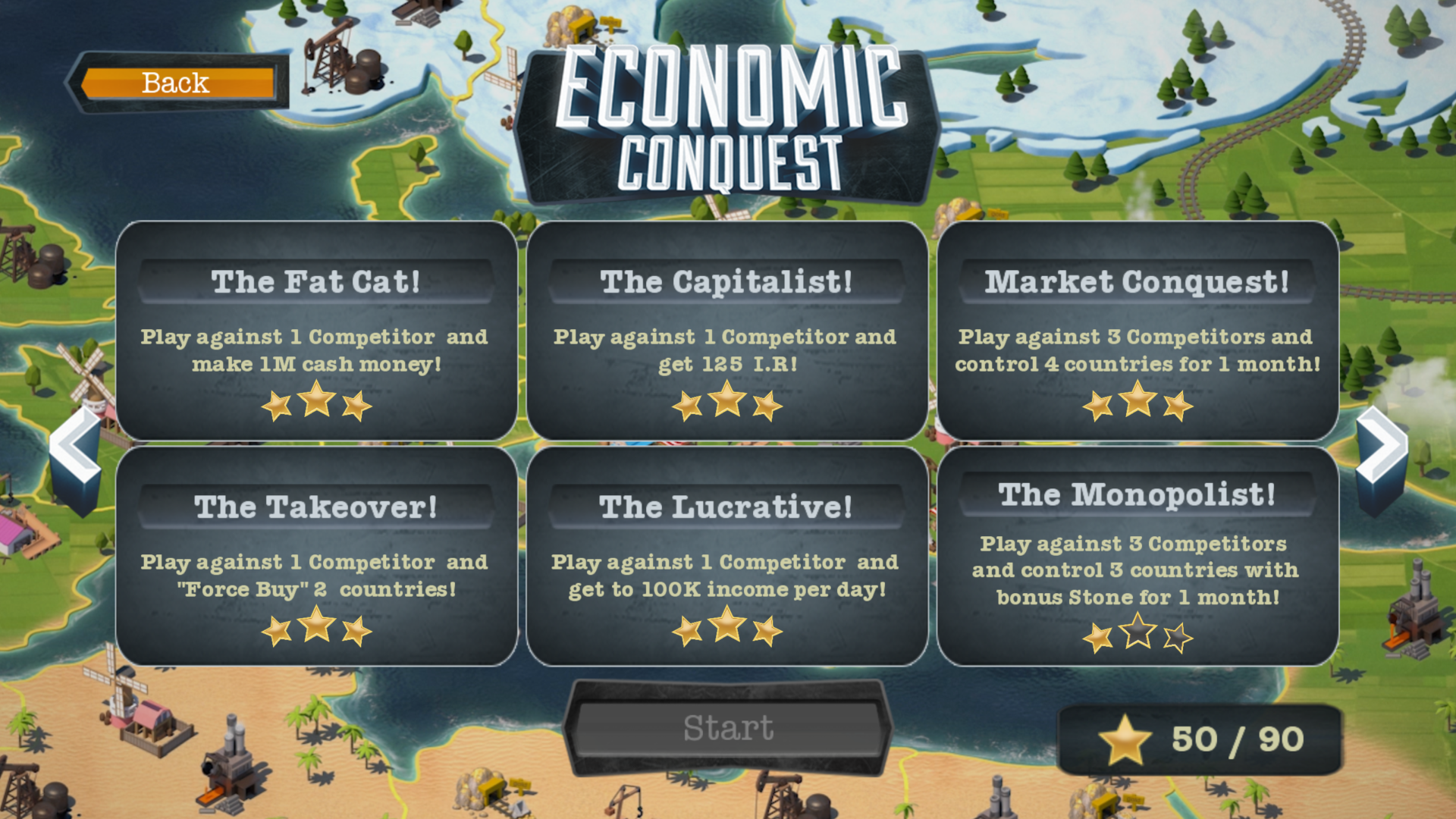 The core mechanics center around how well the player can establish a stable income and the ability to protect territory with the use of influence. Income is generated per day depending on the level of the business, the market value of processed goods and the possible bonuses available in the territory the business was built in. The higher the income, the more stable the ability to manage territories can be as the match progresses. This is increasingly important late game when buyouts become important, which cost a flat rate depending on the level of the businesses in the territory and the influence level. As long as the influence of a territory is above 70 the territory cannot be bought, which can be difficult when the player has multiple countries to manage and the AI is continually decreasing a territory’s influence by the use of mutiny (-10 per purchase). Regardless of difficulty level (Easy, Medium, Hard), the AI presents a challenge and with the way random events change the earning power of resources, waiting to start a business can be a blessing or a detrimental error. 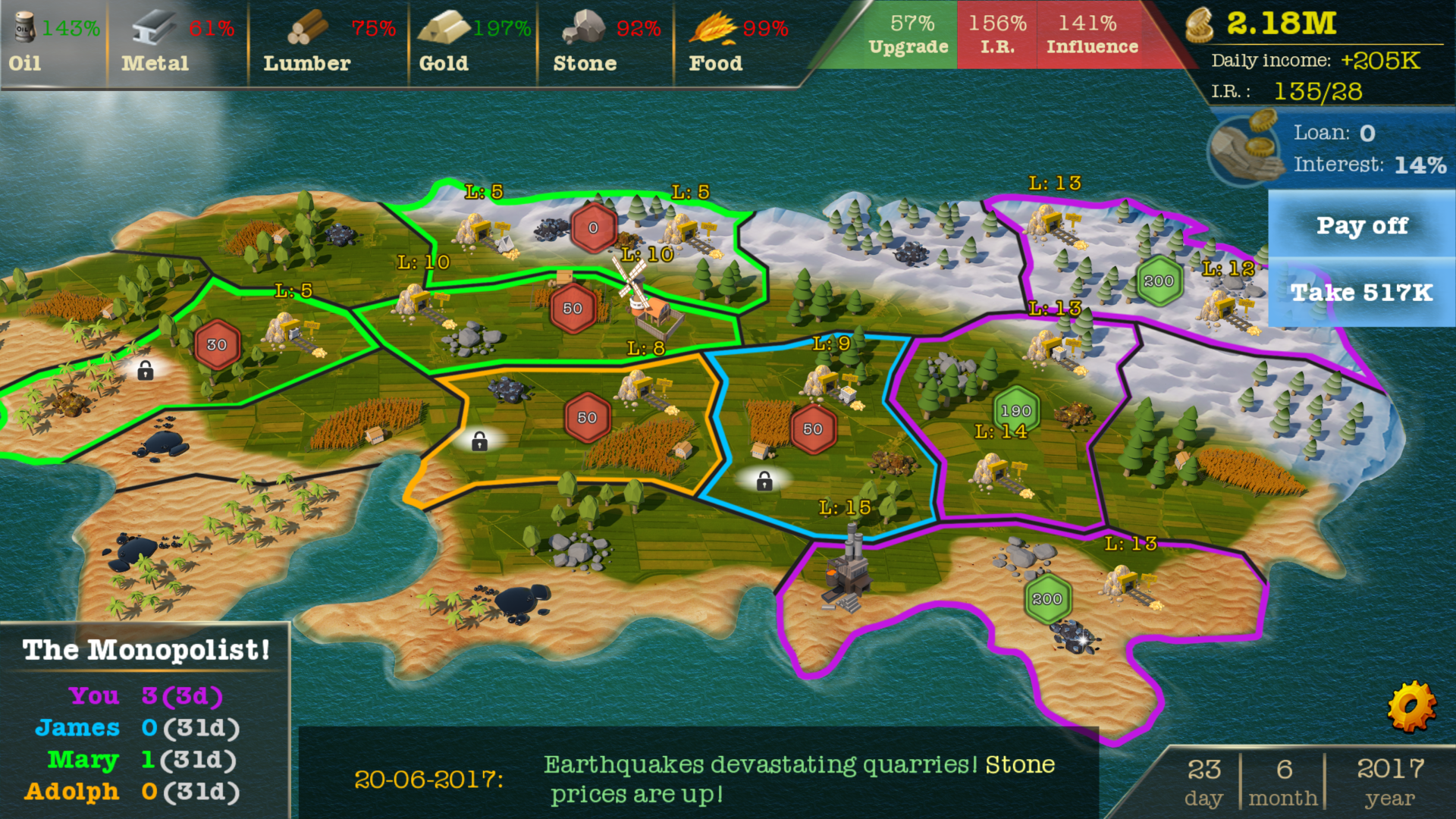 Market values for the six resource types fluctuate constantly and the changes are random, making it imperative to have a diverse selection of businesses to overcome the risk of having a 152% resource gain plummet to 79%. The use of the territory bonuses (25% increase) help alleviate the strain this could put on late game play, which is why it is always recommended to build lumber mills where trees are abundant and oil fields on oil rich coastlines. Low resource earnings, however, can provide an opportunity for early game construction at cheaper prices. Business starting cost are influenced by the resource price, so buying into something offering lower returns is cheaper than buying into something with high returns. This is a giant gamble, but it can pay off later and be a crucial move to combat the AI, which always starts with the first increased resource and tends to only follow the same pattern regardless of the risks. 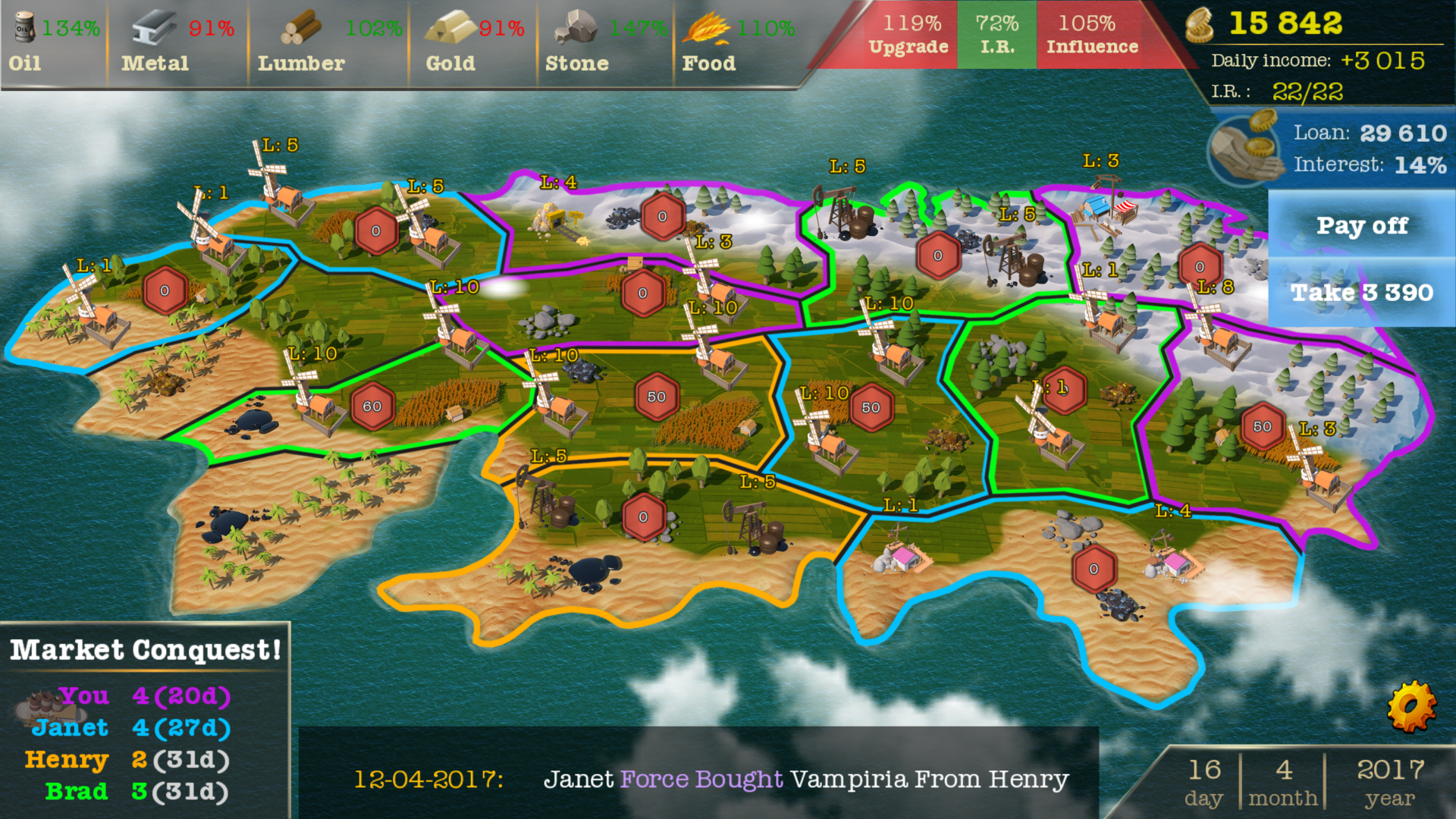 Building upgrade prices also fluctuate depending on certain random events as well as the I.R. requirements needed to start a new business or acquire contracts in new countries. Gaining I.R. is easy (business levels and each five levels of influence), but using the lowered requirements grants an income boost through new businesses that can make or break a game. The other changing value comes in the form of influence, which is mandatory to protect countries from buyouts and to raise the max business upgrade level (5 levels per 50 influence). Influence costs increase naturally with how many territories are owned and the current influence level in the territory, but also go up or down depending on the random event factors. Charity is the primary form of influence (100% guaranteed 10 influence), but bribery is also available at a risk of losing $8000 and 1 I.R. Loans can also be taken out to provide instant income and is increased based on the player’s total I.R. I have not seen any downsides to not paying it back, except the inability to have it for use later if something happens. 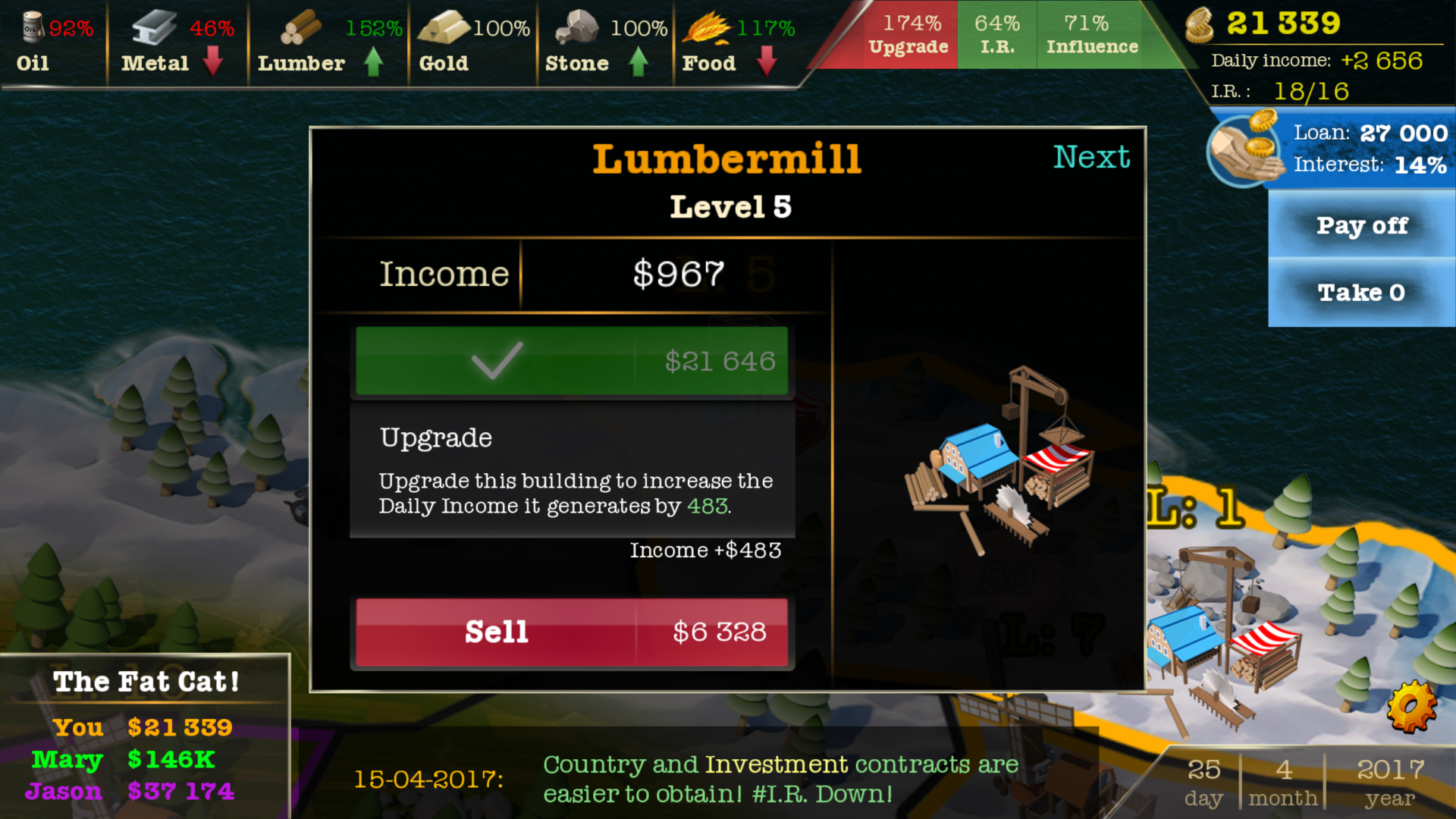 Thankfully, the game runs smoothly with very little load times. It did give me a few problems when I tried launching the game, something I still have to circumvent from time to time. I also ran into an annoying issue with how the menus work. When accessing a menu for a business or to adjust influence ratings, the game zooms into the country in question and requires the user to click outside the menu’s window to exit the menu. I have run into several cases of clicking outside the menu, only to instead open the menu for the country neighboring it. This can be averted by using the ESC key but, regardless of the method used, the game remains zoomed in on the country and requires a scroll out. Considering the hectic nature of the AI during some of the later missions, these are seconds that can drastically change the course of a round. As far as glitches go, I only noticed one dealing with the incorrect tally of Influence increases calculating into I.R. I would influence a territory five times (0 to 50) and not receive the I.R. conversion. This happened randomly throughout my time with the game and can be a major issue depending on how the random events effect I.R. 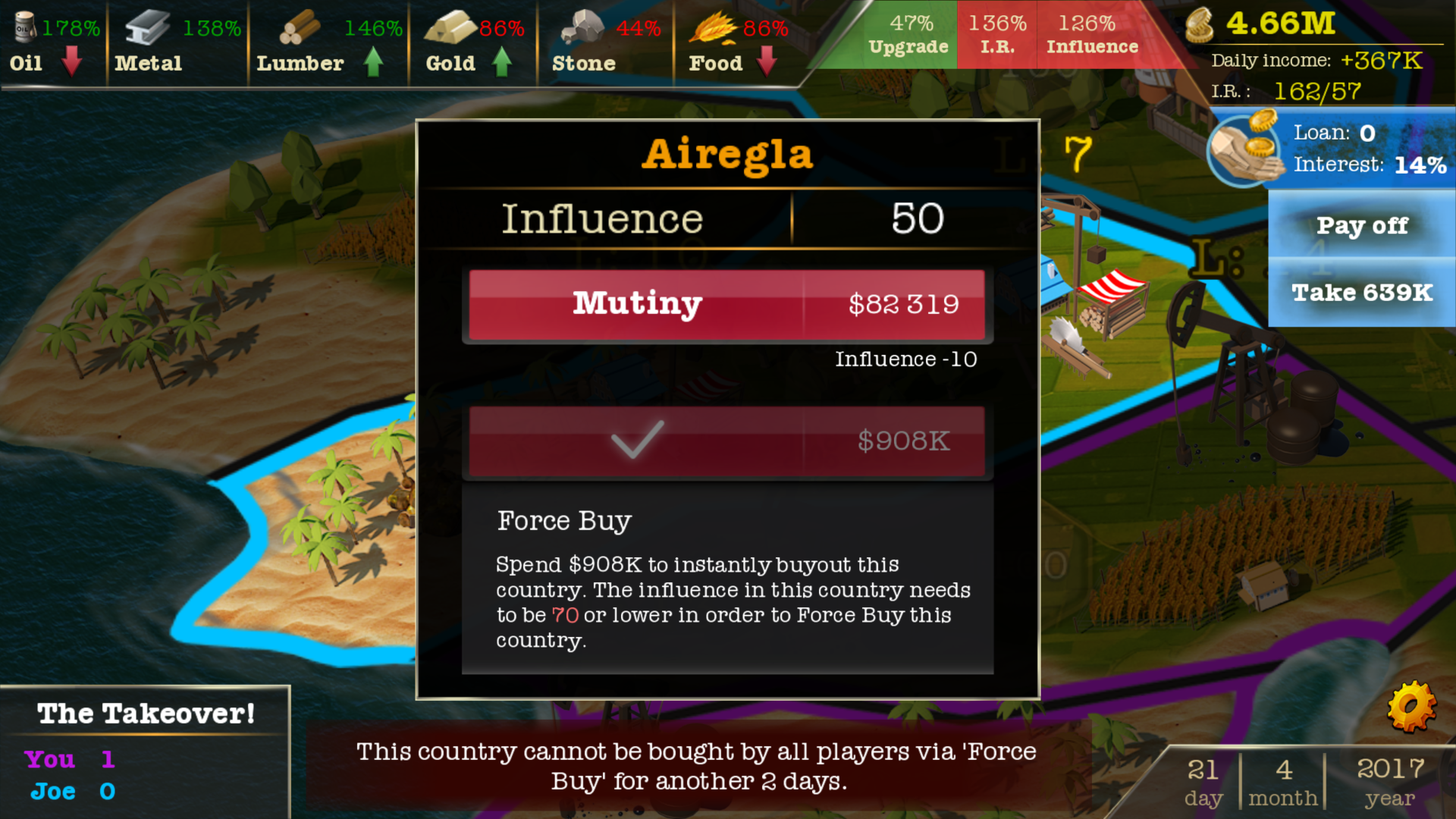 Strategy is a vast genre with plenty of interesting variations in game types. Frismos has made a decent economic focused title and the promise of multiplayer later down the line could bring some much needed life to a game suffering from a predictably routine AI. The game also only has one map with fixed positions for each resource bonus. This isn’t to say I didn’t have fun with the game. It is an interesting concept that can easily entertain during a short break, but the sum of its parts might not be enough to warrant the $8 (or even $4.80) price tag.