Self-proclaimed as “Quake meets Duck Game”, Arkshot is an online first-person archery game developed by Code Avarice. But how does it hold up? Let’s find out. 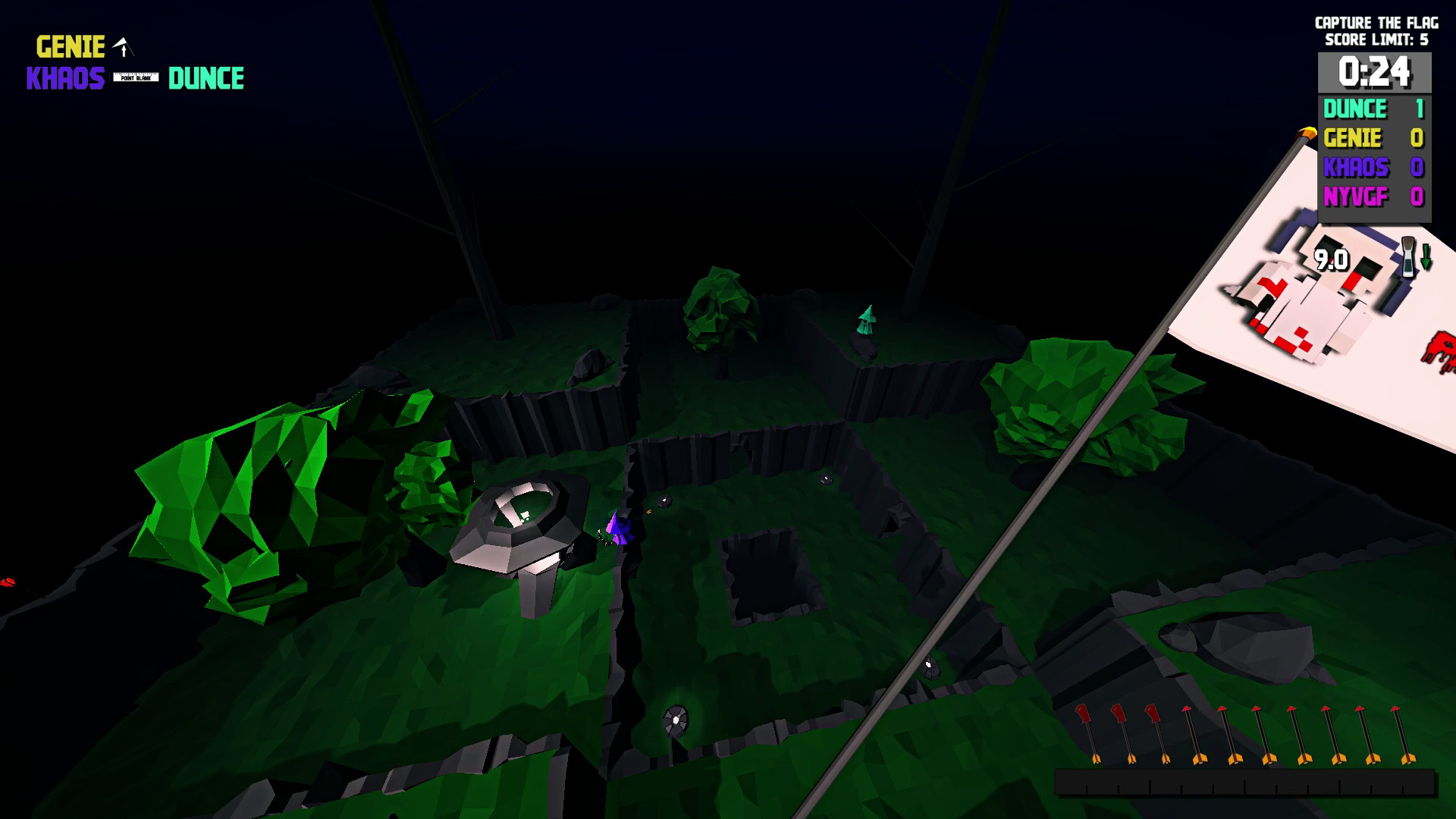 The gameplay is very enjoyable. Unlike other online shooters, it is still fun even when first trying to get used to the controls or faced with other players that are undeniably better than you. Arkshot equips you with only a bow and a handful of arrows to defend yourself against your foes. The first thing to get out of habit is being ready with your trigger finger to quickly take out your enemy. Since Arkshot focuses on the archery aspect, quickly clicking only ends in the arrow sticking to the ground; requiring you to hold down till drawn the desired amount for the arrow to go anywhere.  However, physics also govern the arrows as your movements can also change the trajectory of your arrows. Arrows can be replenished by either running over arrows or gaining specific power ups. The stamina will have to be watched, as not only running, jumping and dashing affect it, but also pulling back your bow lower your stamina. Be sure to keep an eye on it or be caught with no stamina. With the addition of taunts, Arkshot gives another reason to smile while playing. With 14 maps and 5 game modes to choose from, each round is different from the previous one. Various maps will have the same concept as others, but each have a different environment. One will obscure the player’s view, while the other has many ways to fall off the map. Game modes vary and affect gameplay, as it requires different requirements to gain points and the max points to get for someone to win. Deathmatch with how many kills you achieve, taking points away if you accidently kill yourself, to bring in the fun of killing each other with no add-ons. King of the Hill to force the player to defend the goal to still gain points before it is repositioned and Capture the Flag to had strategy as you cannot hold the flag and shoot at the same time. Slowdown is similar to Deathmatch, but slows you down with each kill. The last mode is Headhunter, each time someone dies a skull will be left behind. A minimum of 3 skulls is required to score, having the player either pull it out and survive with their stash or for someone else to snag the skulls and make it to score at the base. With only 5 modes, its highly likely you will see each and develop your own preference. Arkshot also includes a variety of power ups that will be generated from pre-determined spots. Some gives you different arrows to work with, such as decoy or smoke arrows, while others affect yourself, such as power ups that give you multiple jumps and one that shrinks or grows your avatar. Each power up will either give you the edge or make you an easier target.

But wouldn’t camping be a problem? Arkshot answers this by adding in a mechanic where a sky arrow will spawn over players’ heads every 20 seconds. Along with this, it also provides more ammo for the players. Depending on which mode, a base will also be placed in a designated spot for players to score points and will move after some time. So even if one manages to camp, the base will cause everyone to find it to score. The tutorial is recommended before playing online with others. It gives you an area divided into three sections for players to somewhat get the hang of the gameplay. One section to teach movement that will help in most of the maps, one for players to practice shooting and seeing how the physics work on the arrows, and an area to try out all the power ups. This also introduces the sky arrows, giving you the information on how often they spawn when dying to them. The tutorial, however, only gives controls for how to jump, dash, and shoot for keyboard despite part of it using crouch (and having a taunt and chat option while playing online). This could be fixed with adding a dedicated controls list for both keyboard and controller.

Arkshot generally has the look of a party game as players run around an area comprised of blocky look. Each environment has its own palette and build to play in. With some including climbable objects that can be used as a vantage point as the blockiness allows the player to have a way to stay on. You and the other players run around as hooded figures with one solid color on the cloak. This simplicity allows the players to stand out from the environment when out in the open. In the lobby, there are areas to customize your hooded avatar before readying up. Various bow styles to switch out, masks to equip, colors to set your own cloak color, and taunts to choose from. This gives you a way to be a unique figure, despite being a simplistic avatar.

Arkshot contains little music within the background while playing. Instead sounds that are made from the player and the bows take center stage. Each arrow will make a snap sound as they leave your bow, and along with this arrows are accompanied with a sharp sound as they whiz by you. Scoring and picking up skulls also has their own sound affect. Announcers are put above to announce various things, but not too much that it drowns out the other sounds.

While Arkshot does give a variety of maps and modes so each round is not the same, replayability depends on the lobby. As Arkshot does not have bots, it is up to others willingness to play to get satisfaction. The tutorial is the only area where it is single player, but once you know the gameplay this area is not needed. With the empty lobbies, it is up to the individual player to happen upon someone waiting in a lobby (or someone that happens to check if anyone is in a lobby waiting) or a group of people that are not in a private match. Depending on the computer you are using, Arkshot will perform differently. It’s best to mess with the graphic settings to get a smooth run while playing online. With however your graphics may be set on, the experience is intact as it doesn’t affect the environment or avatars as much, only seeming to take away extra details, as it keeps the main aspects to enjoy the game intact.

– Empty servers
– No bots to play without the need of others

Arkshot is a fun game when you are able to gather some friends or find an open lobby. However Arkshot relies on dedicated players to stay alive. With no news for updates to solve this, one can only hope. Only buy Arkshot if you have some people lined up to play with.