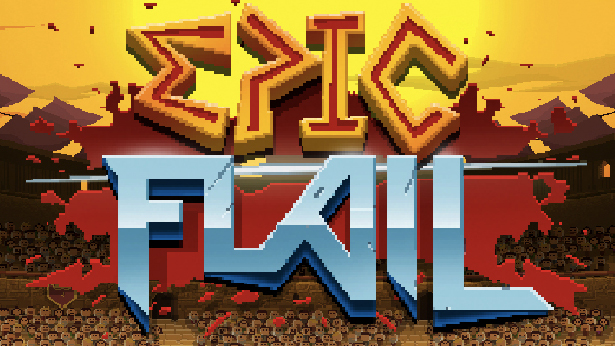 With little to no curation, the App Store is full of garbage. When Steam stopped controlling every single release and opened the valve, the Steam store started to look increasingly similar to the App Store with tons of worthless games. And now, more and more mobile games are being ported to the Steam store. The circle has been closed, both stores are following the same path of being drowned in unremarkable games. One of these mobile games being ported to Steam is named Epic Flail, initially released one year ago on iOS. With a name that begs to be a failure just for the pun, let’s see if it stands as a welcome addition to our machines, or one of those many unnecessary mobile ports. 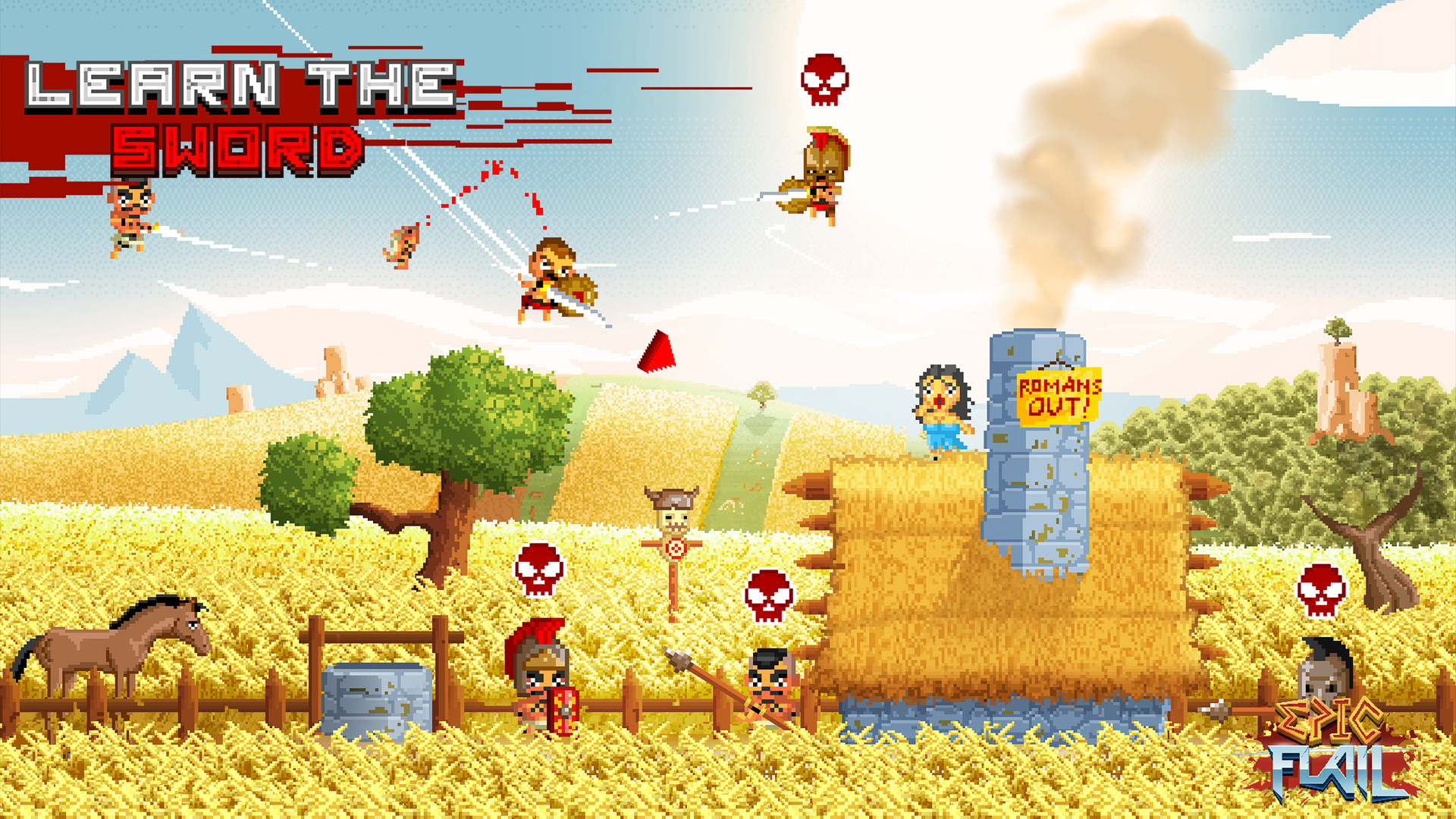 Careful analysis of Epic Flail‘s menu shows that a Quit button is missing, in the great tradition of mobile ports that suppose that to exit a game we press the home button then smear our fingers across our monitors. Well, flash news, games are like cuisine and it is usually frowned upon to eat with your fingers except for fast food – or mobile games in our current dilemma. At least the Escape key works, but please bear with me and do not press it yet. The resolution is quite low and you might want to press ALT + Enter to get full screen. The sound options have no sliders and can just be ticked ON or OFF, which you might be tempted to do after hearing the same metal music over and over. Redemption comes in the form of being able to rebind keys. Light at the end of my tunnel, I just love it when games let you bind your own keys. And hate them when they impose their own set of inputs. 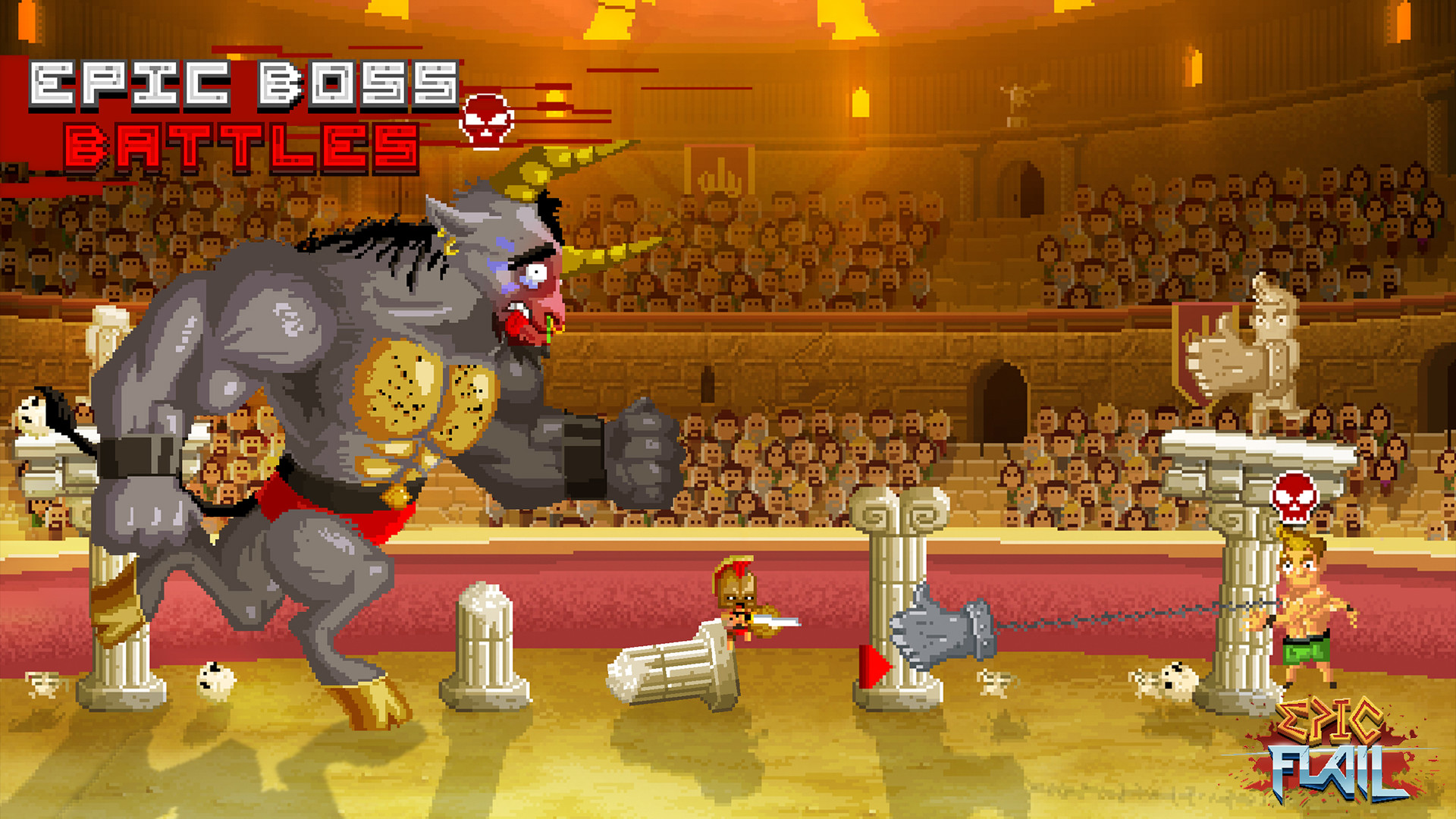 Now that we are done with the preliminaries, let’s get on with the action. The aim of the game is to complete different arenas by killing a certain number of enemies. Our little Spartacus can move left and right and… where is the jump? SLASH

Wow! Nice dash attack! I still don’t know where the jump button is…

WOOHOOOO I CAN FLY!!!

There is no limit to the dash attack. Screw physics when you can use your sword to propel you indefinitely in eight directions. It is entirely possible to never touch the ground again with complete ease, the only limit being the borders of the small arena which thankfully stretch a bit into the sky. 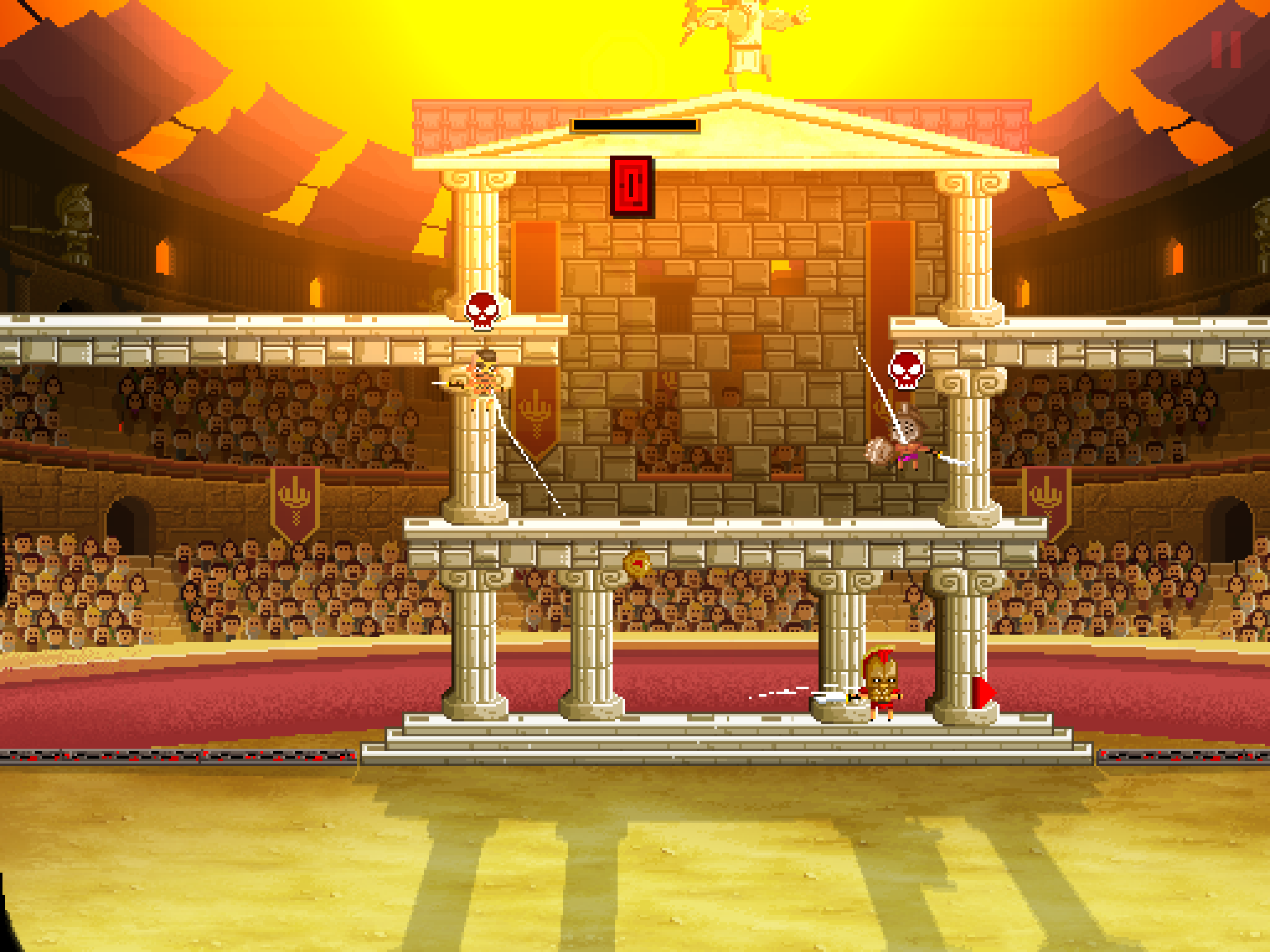 This insane game mechanic comes at a cost. The controls are quite awkward and difficult to master. The principle is quite simple; all you have to do is press the movement keys in a direction while pressing attack. However in practice, changing trajectories quickly on the keyboard is not an easy feat. Controllers can be used and they feel better while soaring in the air, but there is no dedicated button for the roll. You have to press down, which in turn does not really work well on the controller while you are also moving. Despite the awkwardness that takes a bit of getting used to, it still kind of works. Mostly.

Alright, now I know how to move, give me some enemies. Yes, that little dude will do, he seems quite harmless… WOW WHAT HOW DID HE KILL ME SO FAST!

Let’s start again. HE KILLED ME! WHAT IS WRONG WITH THIS GAME!

It took me about five minutes just to be able to consistently kill the very first basic minion. I am not kidding. The enemies have the same move set as the player. Epic Flail is super fast, and super hard. Nothing impossible, now that I have gone farther in the game I smile just remembering when I had trouble with the first arena. 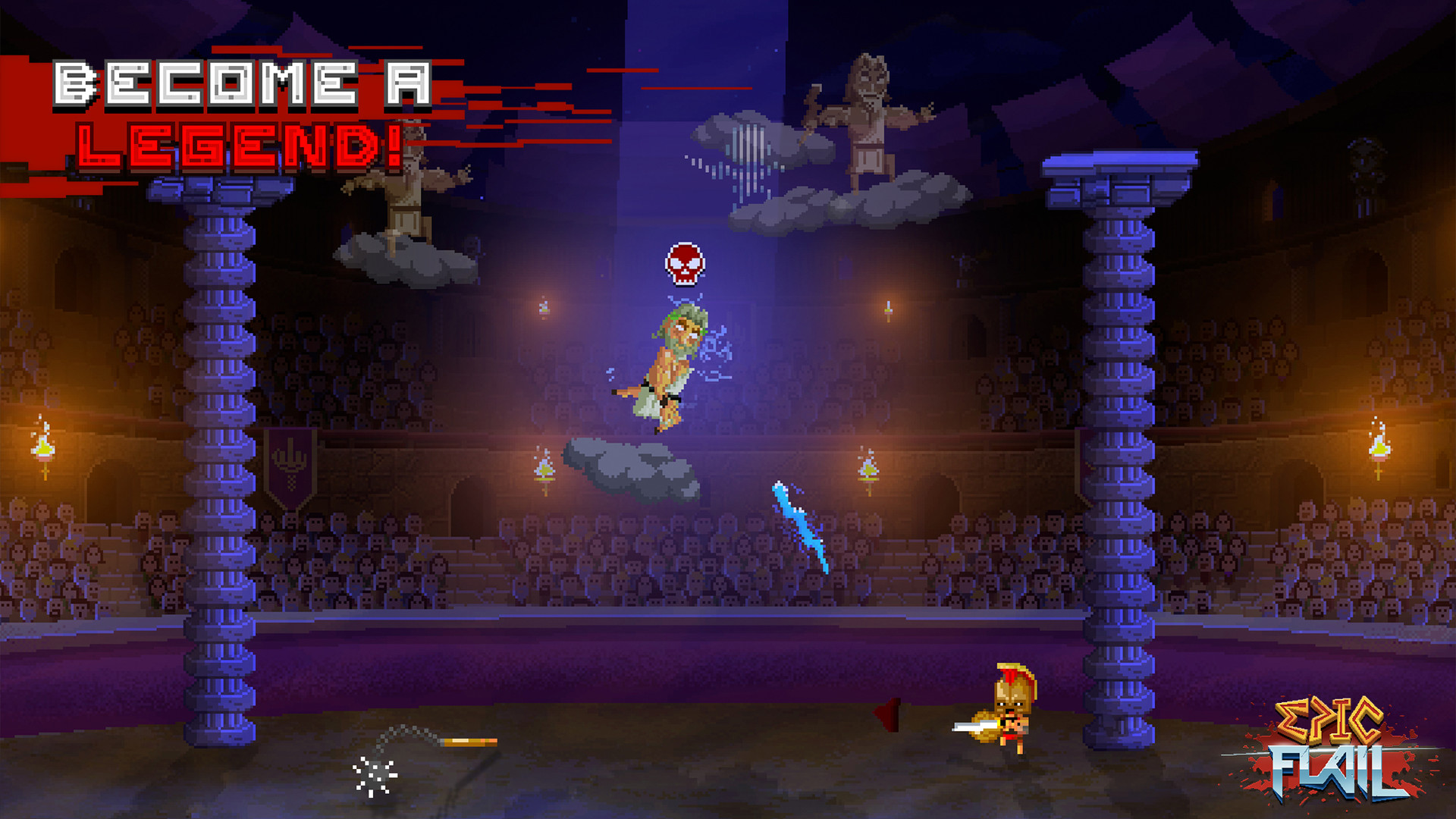 Well then, once I had set up a little tactic to consistently destroy my opponents, I graduated to the second arena AND I WAS TETHERED TO A CHAIN MY TRICK WAS NOT WORKING ANYMORE. I had to master the game even more. I became a pro at the “dodge roll and slash” technique.

Then I reached the next arena THERE ARE SPIKES ON THE FLOOR HOW AM I SUPPOSED TO ROLL!

You can see where this is going. Epic Flail starts off as really really hard, lets you learn how to beat the enemies then throws you in an arena that will force you to adapt your tactics once again. The renewed challenge kept me hooked, but it works because the base gameplay is just fun. Yes, awkward and hard, but super fast paced and original. You are a killing machine, but any single mistake could mean death and losing that streak of 39 enemies killed while you needed 40 to complete the level. 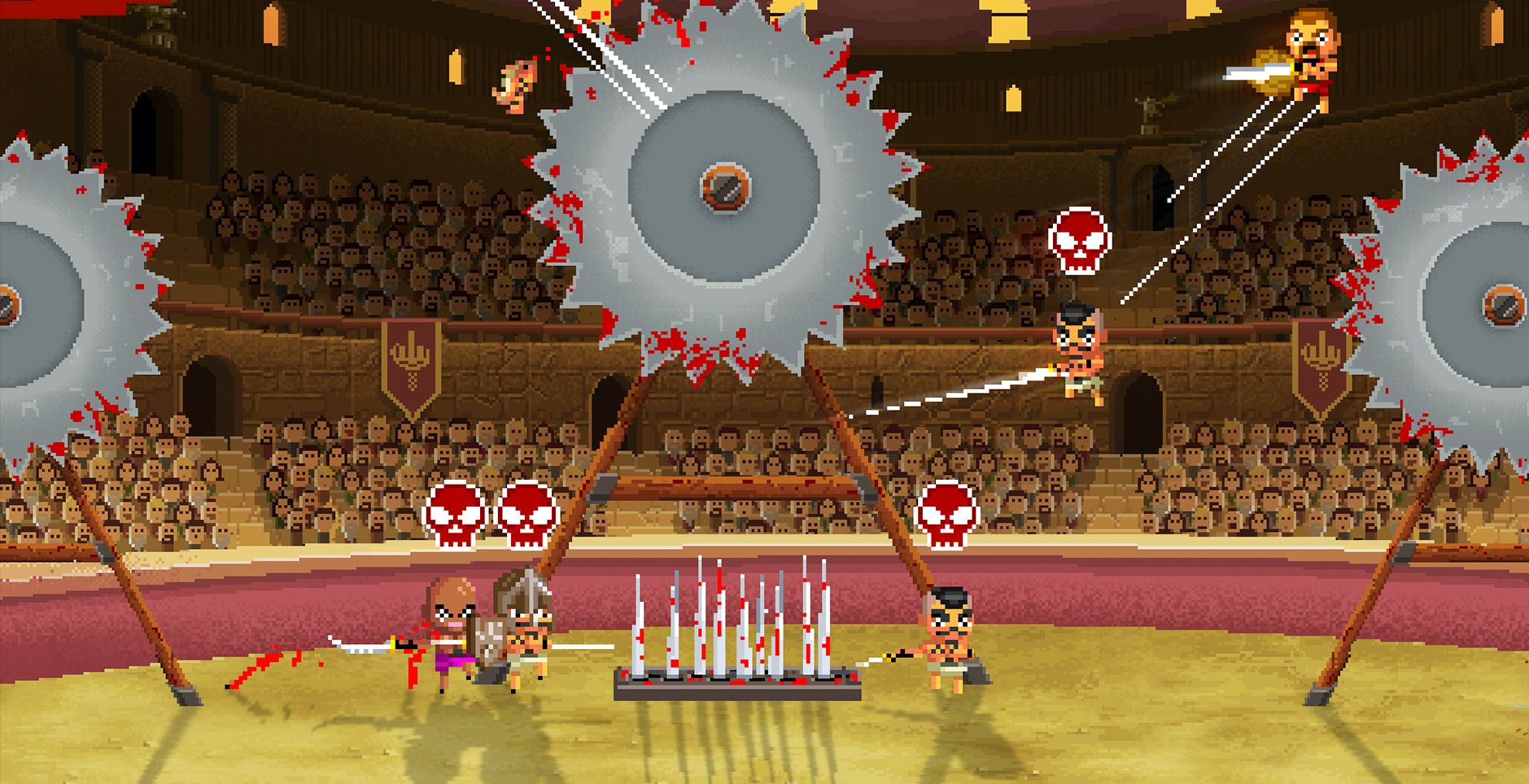 Actually, I lied when I said that one mistake means death. That’s only when you start the game and you are basically naked. Thankfully, it is possible to gear up by removing armor, shield and helmets from the enemies and equipping them yourself. Each piece of equipment effectively acts as a health point that can be retrieved again once lost. Oh, but you are not the only one able to do that. The little soldiers that you are fighting can get their stuff back or pick it up from the fallen. I was even surprised to see the AI opt for survival and retrieval rather than blindly coming at me. On the other hand, they often seem to ignore traps. A trait that can be used to efficiently dispatch part of the threat, however you should be careful around traps because an enemy parry can instantly throw you backwards to your untimely death followed by your raging scream. Spikes kill in one shot no matter what. Make sure you are not the type to throw your controller, keyboard or cat before you launch Epic Flail.

Eventually, acing the early levels allows unlocking permanent equipment upgrades for a sweet full Gladiator set, easing up a little bit the difficulty at the start of a level. Another bonus for the player comes in the form of the titular Epic Flail, a temporary weapon earned after a combo. The flail ignores any kind of protection, transforming the player into Mars the God of War.

One last thing to mention are boss fights. There are several of them, but except for a welcome change of pace I did not find them particularly interesting.

Finally, longevity. This is going to be a little bit sensitive. If you are very good, it will take you at most a couple hours. If you hate the controls or if you are very bad, a couple minutes. In between and depending on when you have had enough, the game can last you from one hour up to a dozen hours. With the way it plays, I think that the game was begging for local multi-player, sadly not present. 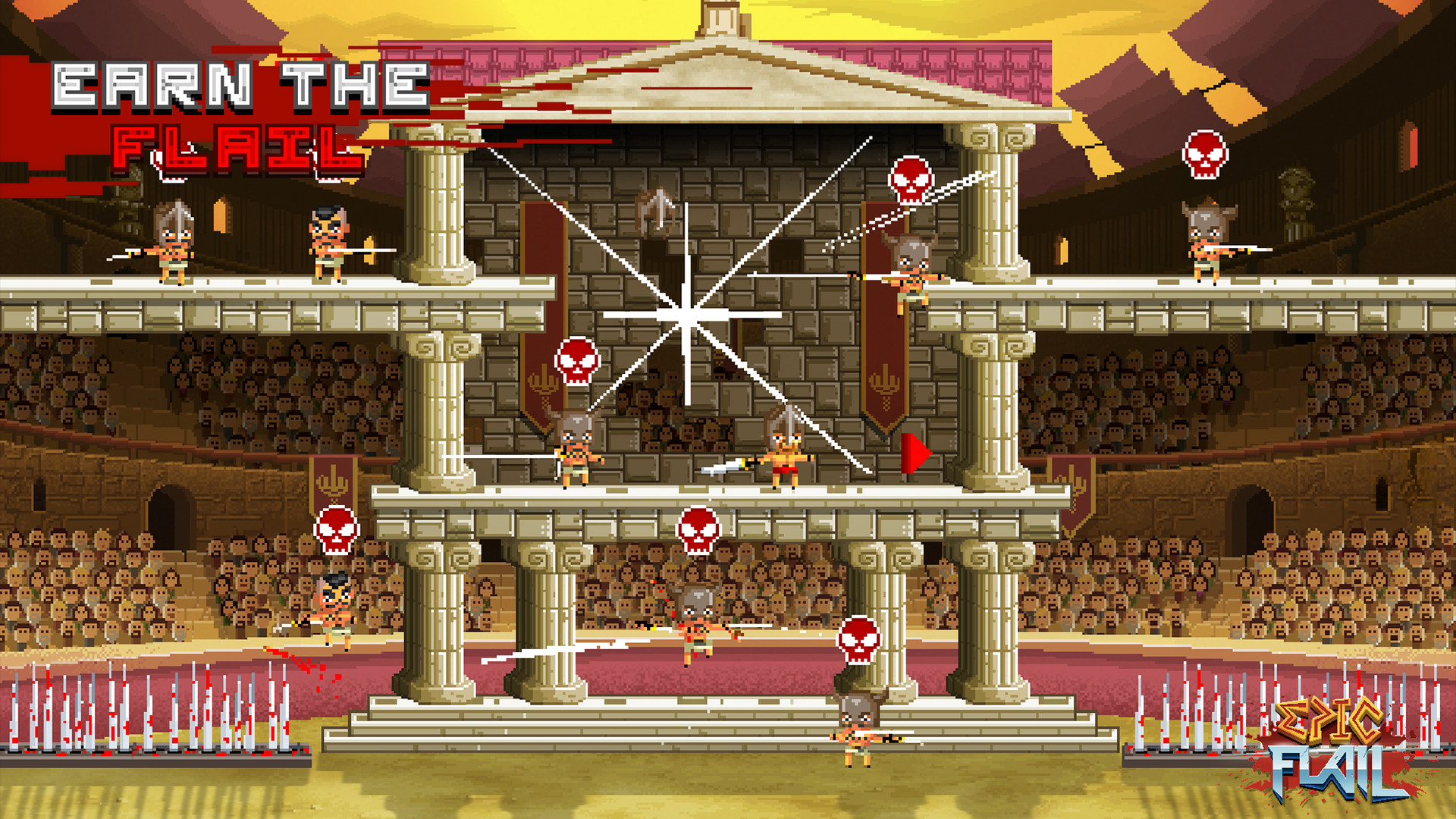 In conclusion, Epic Flail is a blast. Empowering pure undistilled fun despite the awkward controls and dash locomotion. Even though at its heart it is just a survival game in small arenas, the game mechanics and levels have enough depth to renew the pleasure for a few hours, however more enemy types would have been welcome. Sold at a low price, the game is definitely worth it if you are looking for short bursts of fast-paced gameplay and some challenge. A very brutal challenge. I mentioned earlier that Epic Flail started as a mobile game? Well, it had no right to be this good on a computer.

Here is my video review for this game: