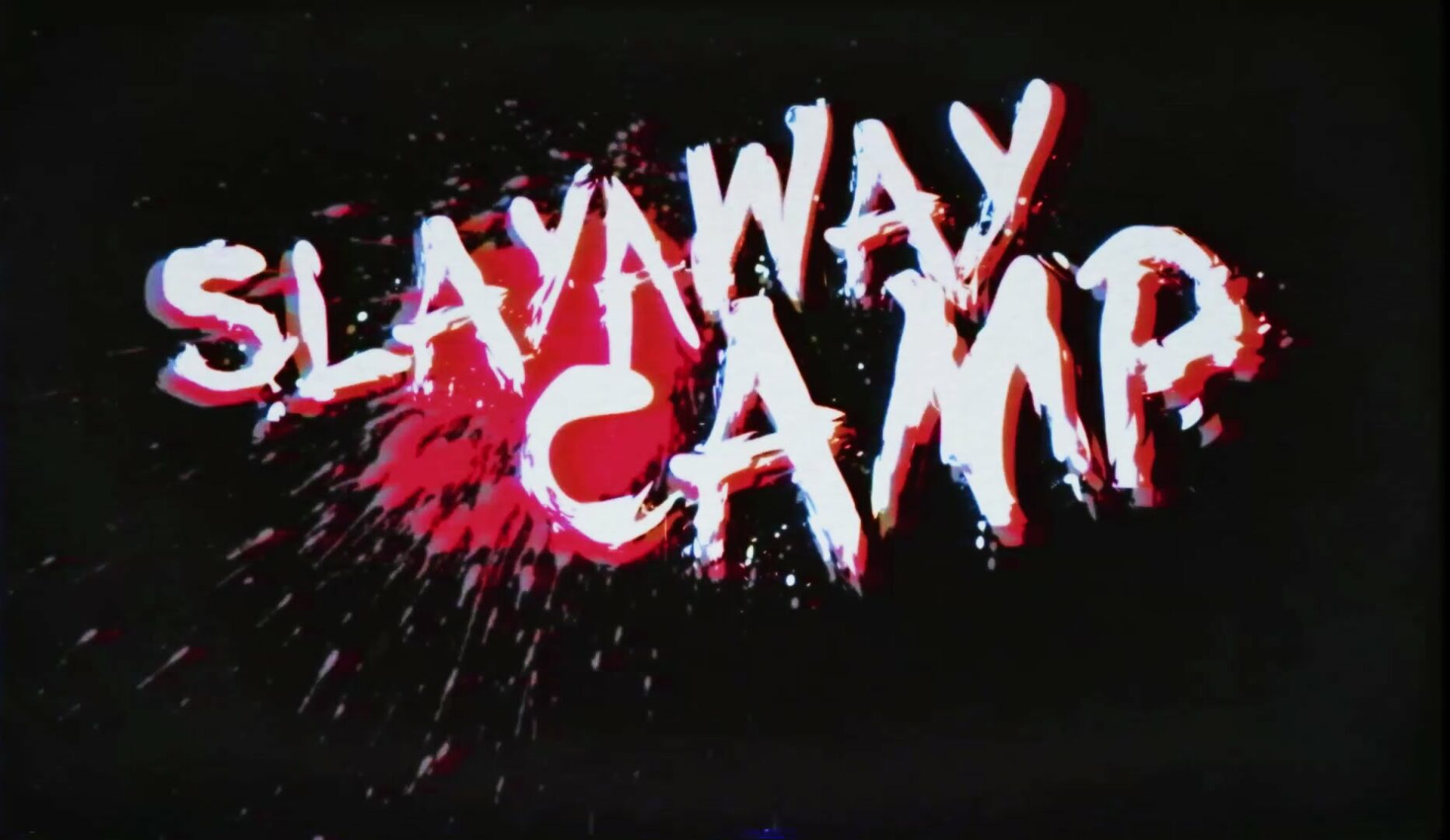 Slayaway Camp is a gory puzzle game which aims to pay tribute to the old slasher-flicks with a touch of humour on its side. Does it slash its way across the pile of various puzzle games or drown in its own blocky blood. Let’s find out: 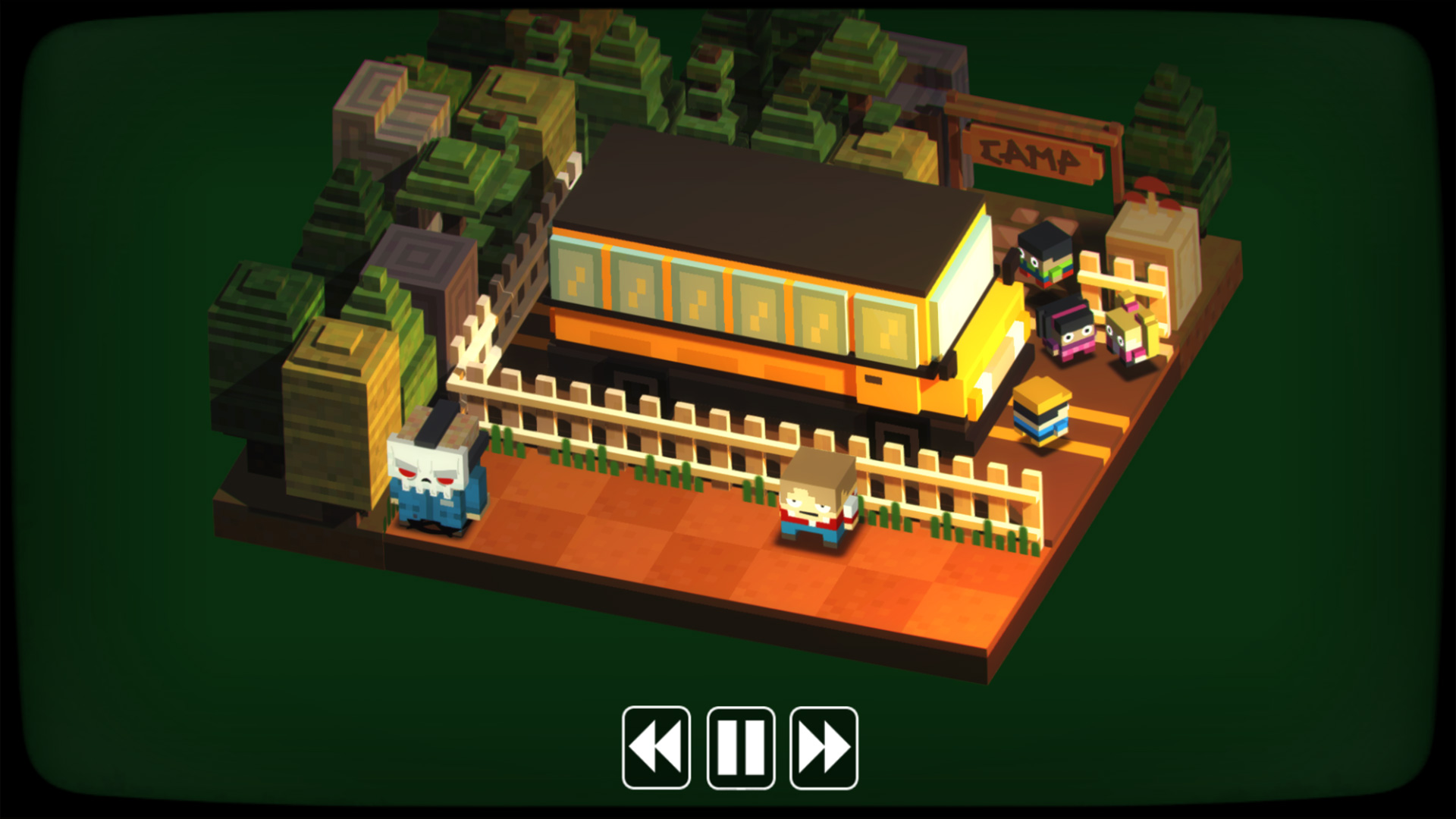 Slayaway Camp puts you in the shoes of a psycho killer with a single aim of killing all the teenagers camping in the area and get the hell out of there. The main gameplay loop is pretty simple, you slide across the path of laid out in front of you and stop at the end of the lane. You continue this till you reach a teenager and kill him, repeat this till you have killed all the people in the area and then get to the portal. While initially it seems pretty easy, it all gets a bit more complex as more and more gruesome ways to kill enemies are introduced and when the police get involved. Every turn you take is very important as even a small misstep can leave you stuck with no way of getting around. This applies not only to the killing but even after the killing is done, you may come to a place where it becomes impossible to reach the portal, thus forcing you to restart the level or retrace your steps. If you are stuck, you are given two options: Either replay the steps and try to find out where you went wrong or start the level with a clean slate. As the SWAT forces are introduced, they introduce a new challenge, completing the levels with a specific number of turns and try not to get in their way as their guns take you down if you get in their laser sights. 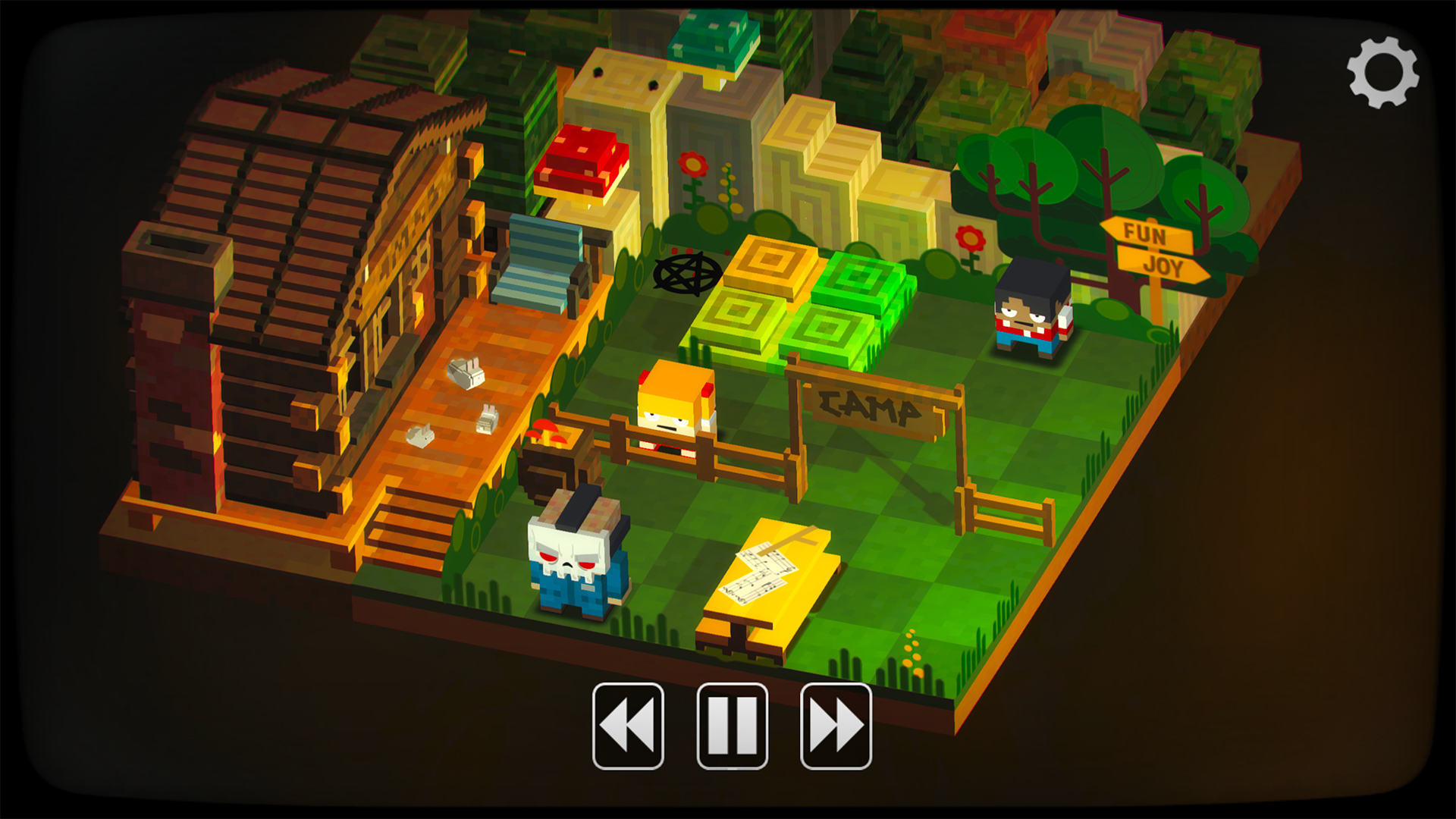 Slayaway camp features a lot of different ways to kill your enemies, scaring them into fire, a hole in the ground, crushing them beneath a refrigerator etc. While none of the people you’re supposed to kill flee the whole level at any point, they do get scared and back away if they see you passing or when you kill one of their buddies close to them. This way you can scare them into falling into their own deaths. After every scene, a quick time even minigame is given to you for a chance to get bonus kills and earn bonus coins. These coins afterwards unlock “Gore Packs” which are various kill types which will be played in your upcoming kills. After every act of a certain movie is complete, it unlocks a different movie which features a different killer. You can also purchase killers at the shop if you don’t like the killer provided to you. Note: A killer named Jimsaw is based on Jim Sterling who is a must buy. Everything in Slayaway Camp is made so that you get the feeling of being a psychopathic killer without actually being too controversial, as was seen before in games like Hatred. Don’t mistake it for a game like Party hard, which is mostly a strategy game. Slayaway camp is a puzzle game through and through with a fresh coat of blood. There are a lot of puzzles to go through and a ton of content to unlock here. Slayaway camp’s finely tuned puzzles are just difficult enough to appeal to both casual and hardcore fans alike. 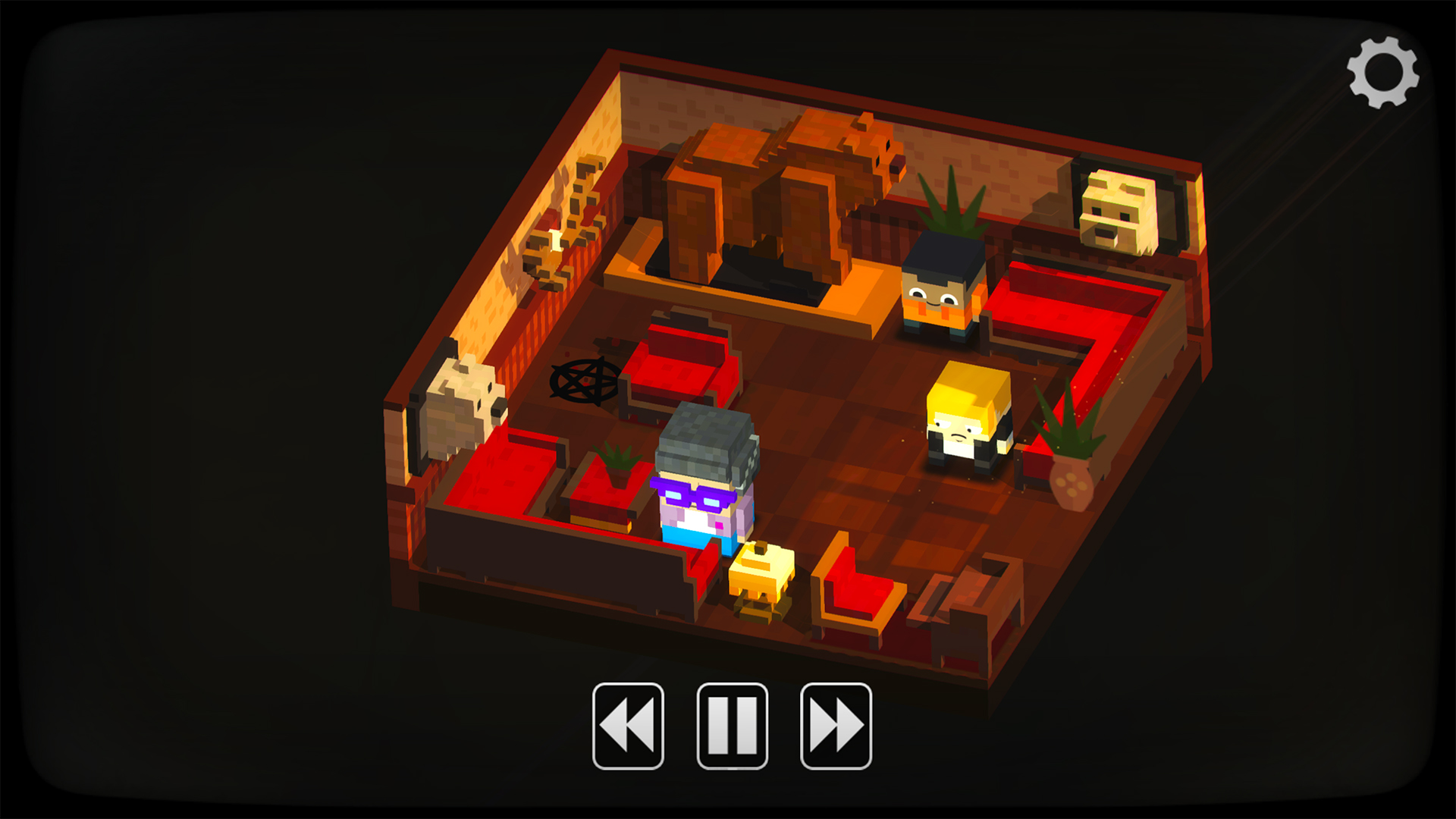 Slayaway Camp features gory visuals in a very cute cartoonish style. It reminded of an indie game OTTTD, which featured similar visuals. Blood and gore flow through air everytime an axe is swung. The characters look cute and the environmental style is also very good. What really impressed me was the way the characters got scared. You see a guy perfectly fine and listening to music and slowly shaking their hips. Suddenly you pass by them in a flurry and their expression changes as they start to shiver and look around. This really helped in creating a solid atmosphere for the game. The killers themselves look different enough to provide a different feeling than the last one. Overall, Slayaway Camp provides a solid graphical style to keep you invested throughout. 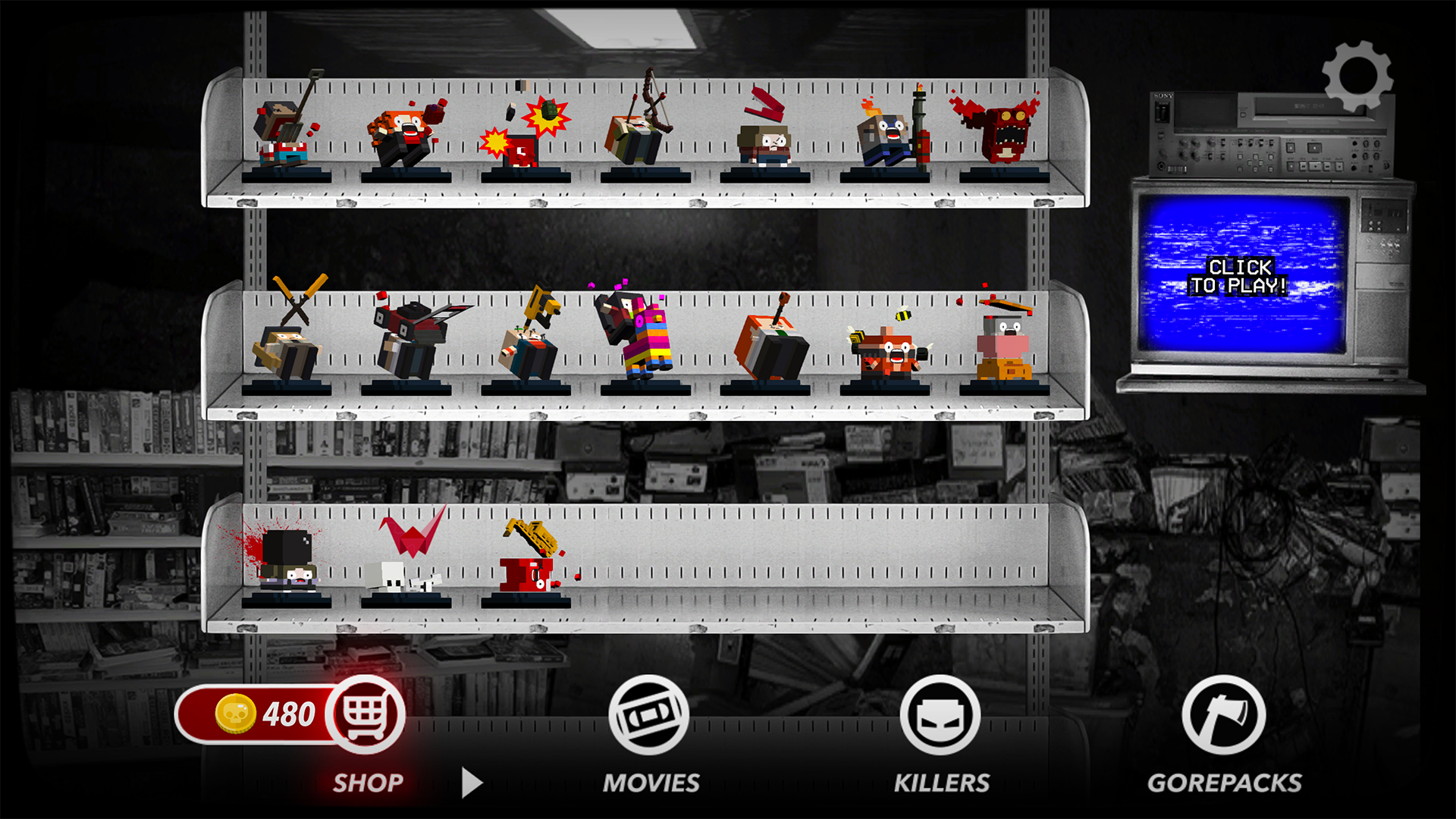 The Soundtrack of Slayaway camp is good. At the start of each scene, the music is soothing and relaxing but when you get in the heat of the action, they start pumping a much more tense sound. Other sounds like people letting out loud shrieks when you pass them or in front of them and the way your weapons slash them down are pretty good. Everything in Slayaway Camp’s soundtrack is solid and goes along with its pretty visuals.

Slayaway camp is a very good puzzle game which is coated by layers of blood. Even if you’re not the biggest fan of puzzle games, the tricks applied here are simple enough for a newcomer to get into. It’s pretty visuals and humour is enough to warrant a ticket to Slayaway Camp. It’s a blocky good time!