Your everyday job inside a Supervillain’s lair.

Despite being inundated with Superheroes in modern media, there are surprisingly few Visual Novels breaching this theme. Even more surprising is that when one finally appears on Steam, it is not a half-assed perfunctory attempt, but rather a quality product.

Henchman Story has a heavy focus on story, but it is also possible to trigger a few romances. As a lot of Visual Novels cater to specific genres and audiences, it could be helpful if I directly lay down a few key facts for those of you who need to know the following information. 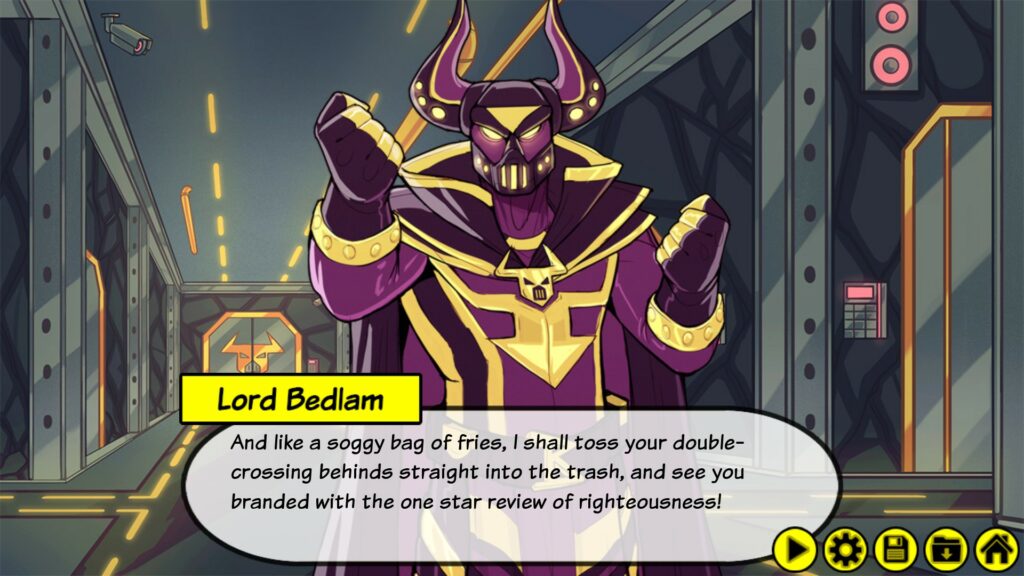 We fill the purple shoes of a masked henchman named Stan, working for the grandiloquent Lord Bedlman, a caped villain who owns his own super-secret lair. Despite his pompous style, Lord Bedlman is a softie and his evil deeds are rather tame. Stan’s peaceful routine takes an unexpected turn when his boss suddenly graduates from simple dog food heists to a coordinated assault on a research center. Superheroes and Supervillains clash, and two-third of the staff is left behind. I won’t reveal more of the plot, except that thankfully, a neat new app allows Supervillains to recruit Uber drivers… errr, I mean henchmen-for-hire, as the plot taps into modern technologies as well. 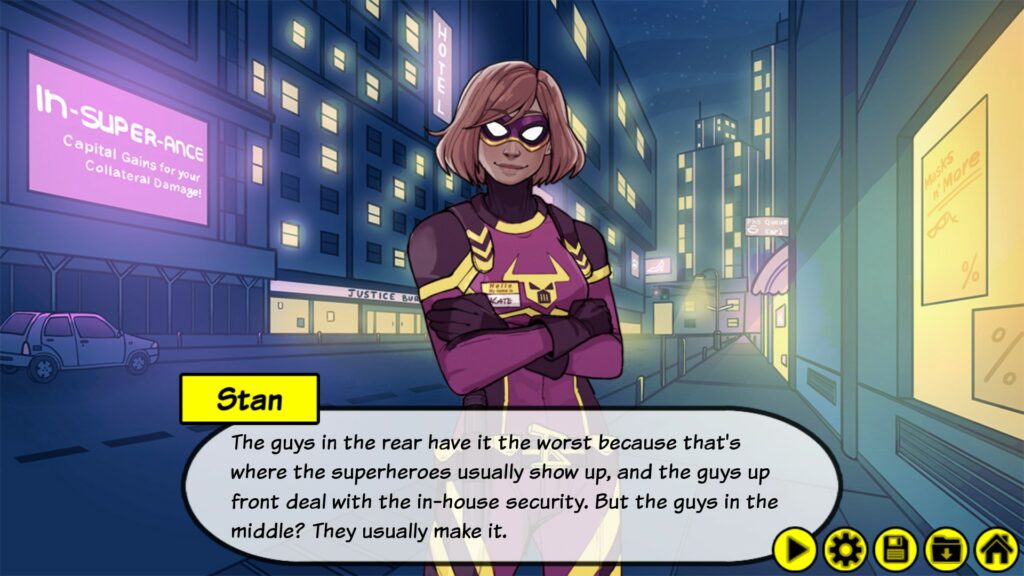 What follows is an action-adventure/thriller/comedy/romance as the player helps Stan navigate the treacherous environment of office politics amidst a war between heroes and villains. Henchman Story is truly impressive there, as it allows you to ride the adventure to completely different outcomes. Actually, more than half of the story can be drastically different, with entirely new plots, locations, and dialogues! You can count 6 hours for your first run, then 2-3 hours more to explore the opposite branching storyline (you can fast-forward what you have already seen). There are even more endings to explore, stretching your time with the game to easily 13-16h if you are keen on seeing everything. Less impactful but still impressive are lots of small choices that get references in different lines of dialogues or alternative events further down the line. The work behind Henchman Story is stellar. 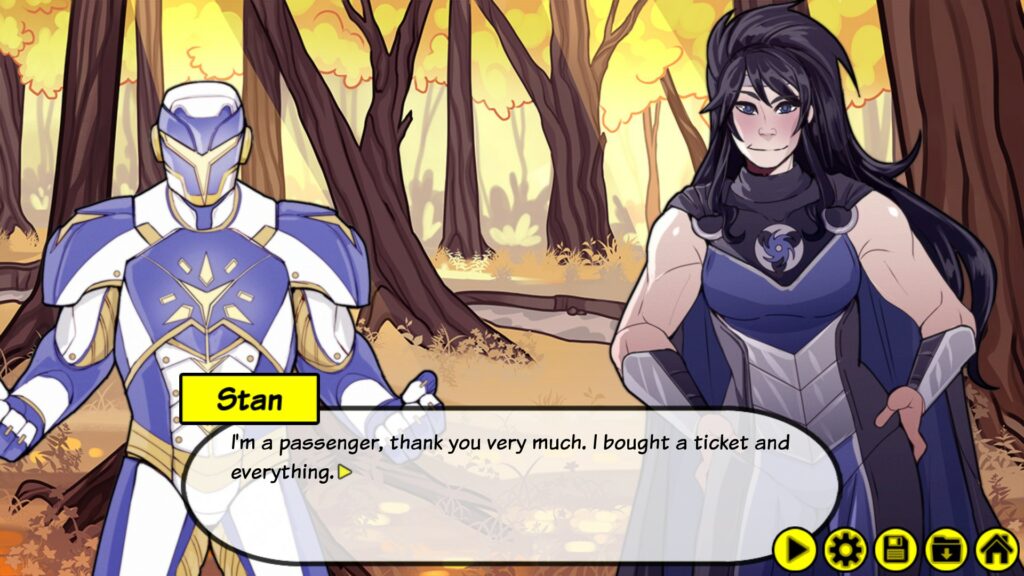 And it’s not just the quantity, but also the quality. The writing is great, the characters are memorable, the interface is perfect with its comics style, the art is colorful, and all the dialogues are fully voiced! The voice actors also did an excellent job. I did find Stan’s voice less charismatic than the others, but it fits the character: he starts out as an average henchman, and depending on where you take him, his voice will evolve as well. 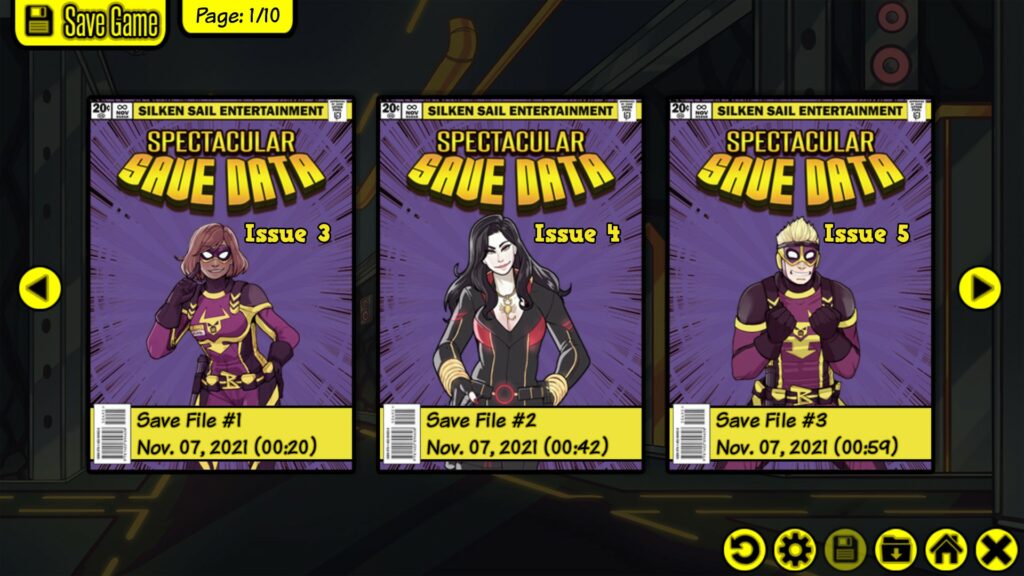 Stan indeed begins humbly as your average unremarkable joe, just here to clock in and to clock out. Is he pragmatic, or just lazy? You can keep him in that state, or you can tap into his potential and prod him toward good or evil. He doesn’t have a superpower, but he excels at banter, which takes advantage of the medium in which the story is told. Some lines of dialogue are succulent, and I found a few moments to be quite hilarious. Chief of them was the local equivalent of a Dungeons & Dragons session; each of the characters attending the session had their personality seep through the tabletop adventure, it was a perfect mise en abîme. 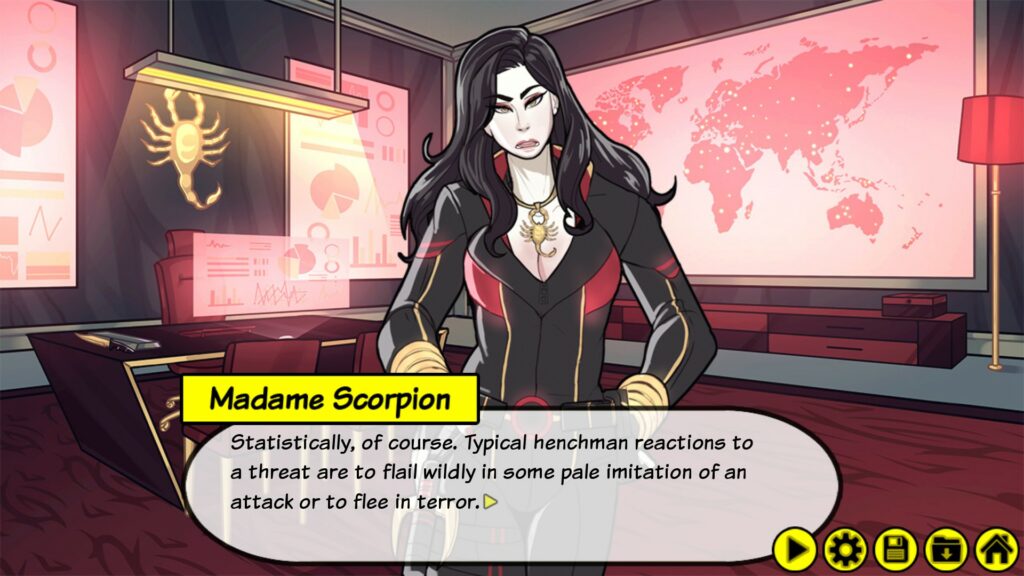 The main Supervillain, Madame Scorpion, had a lot resting on her shoulders. It is often said that a story is only as good as its villain. Rest assured, the character and her voice actress nailed it through the roof. You can constantly feel the tension emanating from Madame Scorpion, especially during your interrogation scene as you witness firsthand her cunning and thinly veiled threats. You quickly learn that your actions have consequences and that she is always at least one step ahead. 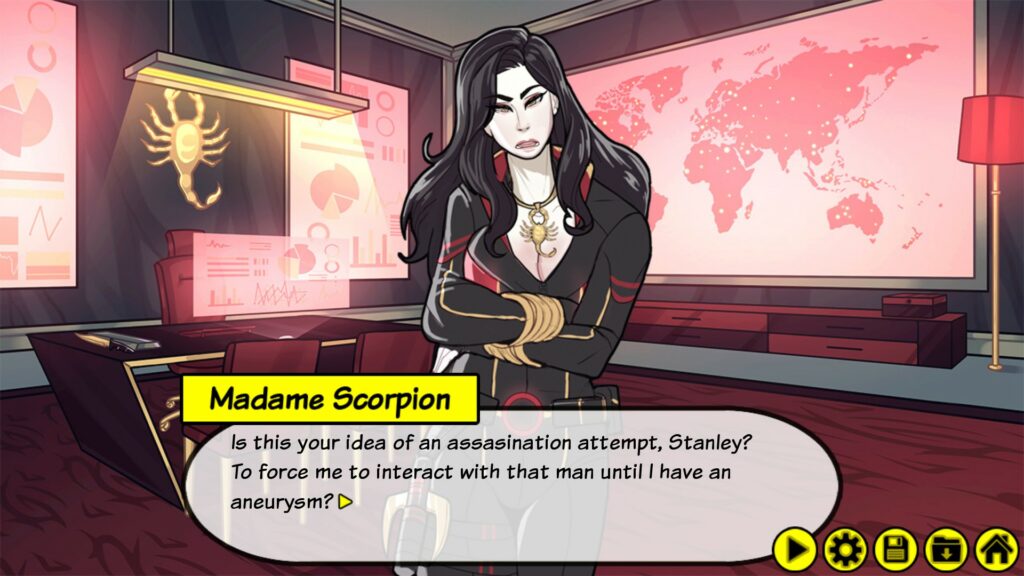 Henchman Story knocked it out of the park. This is one of the best Visual Novels that I have ever played, going so far as to more than double its content past the halfway mark. Most importantly, the writing is witty and funny, and the characters are either adorable, sweet, or overwhelmingly intense, but they won’t leave you indifferent.