*Looks up tennis puns* It spin a long time

You play as Drake Lacasse who was a hot shot tennis player until, well, his team got to finals. It turns out that performance enhancing drugs (steroids right?) were found in his bag. Except Drake doesn’t and never would use those drugs, he got where he was by his own hard work and not by taking shortcuts. Bad thing is though, no matter how much he knows that he never will and denies it, the zero-tolerance policy doesn’t need to test the accused to pull him and his team from the finals (at least Drake wasn’t outright banned). Bogus policy if you ask me, it seems way too easy to frame someone if they won’t even run tests and an easy way to cripple your rival team. Anyway, Drake’s life was pretty much ruined as most of the people he has come to know seemingly not believing that he would never take those drugs.

At least he was given a chance of a second chance at Rosegate University. While he is being transfered in deep into the school year, he is being invited to join their tennis team, and by extension compete with them in the city championship. While Drake will be busy getting to know his new teammates and shaking all that rust off in their VR training system (looks at unused field just outside window), he’ll soon find out why and who planted those drugs in his bag. 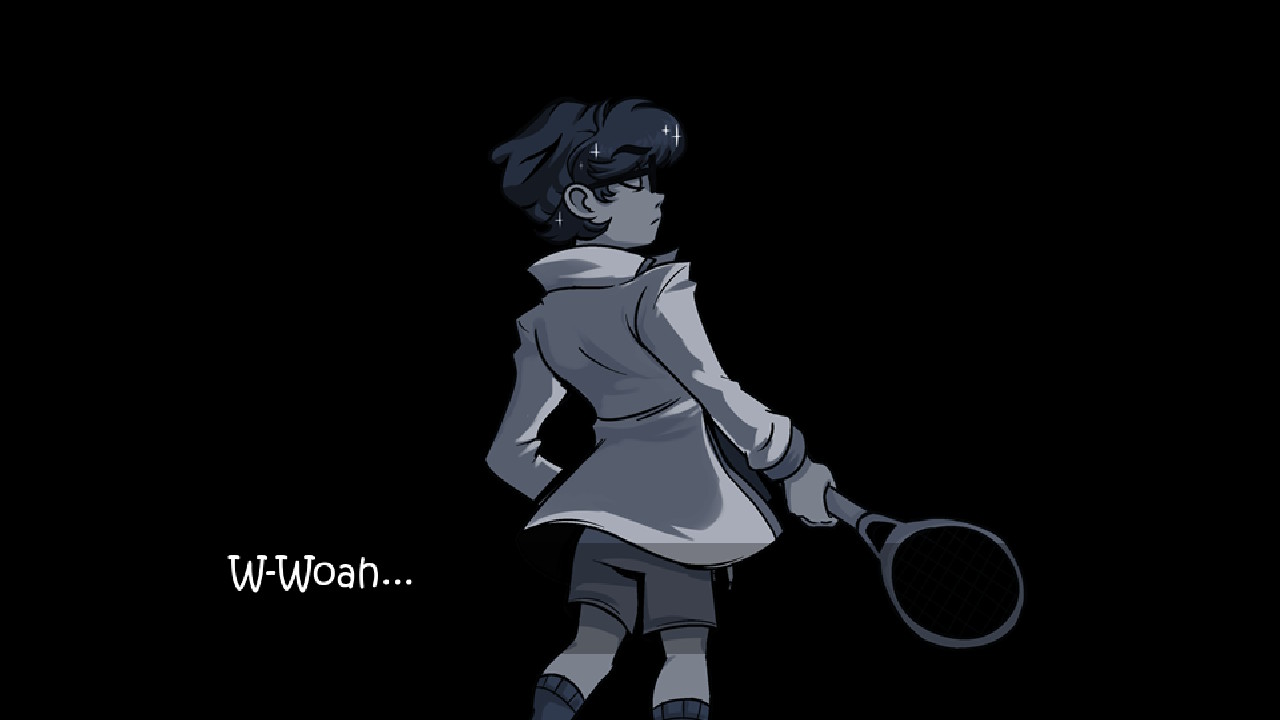 Before getting into the tennis, let’s talk about friendship. Like any sports team, you have to work together as even though you have talented people on your team, it doesn’t matter if they act like they’re the only ones there. Granted, tennis in particular only goes up to a max of two people per team, but still important that everyone is on good terms and open their arms to new team members. Drake is a bit of a disadvantage, but most of his new teammates aren’t too closed off. Sure, you do need to practice with them, and not just regular practice but their own sub-game they made, or buy them some gifts from the mall, but eventually they will want to hang out at a different location. And you might even get to know them more as the confide in you. Each hang out will increase your friend level, which will also unlock a perk on certain levels. Which you can then equip on Drake to give you some help, and get the bonus effect if you have them as a partner. 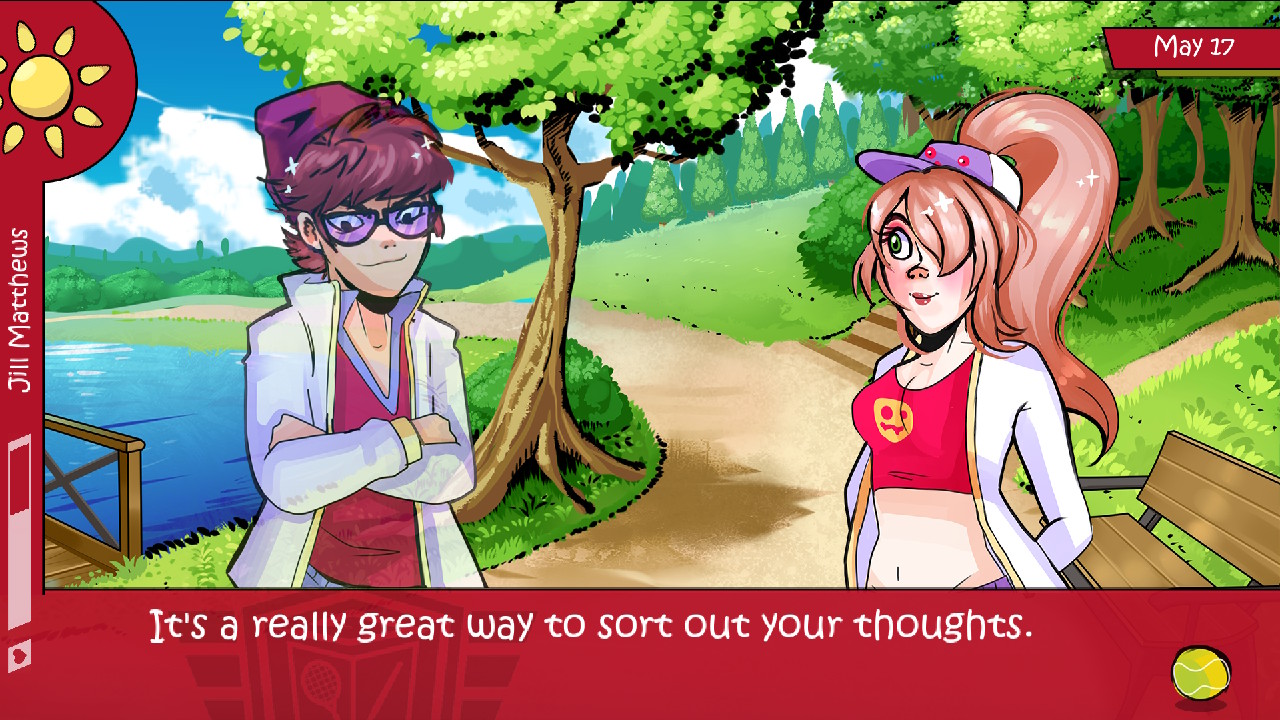 There are also some other characters that aren’t a part of the tennis team, but you can still hang out and increase your friendship level with them. They appear in buildings, which they have a chance of being in when checking (though I’d like if their character profile showed up in the background art) and they’ll give you perks as you increase your friendship with them. They won’t have any bonus aspect, but it can be useful.

Though, I do wish that there was a way to distinguish a Lvl 5 friendship with a Max friendship as both looks the same on the indicator shown during dialog and that the background of the character portraits correlated with their perk colors when choosing a partner. 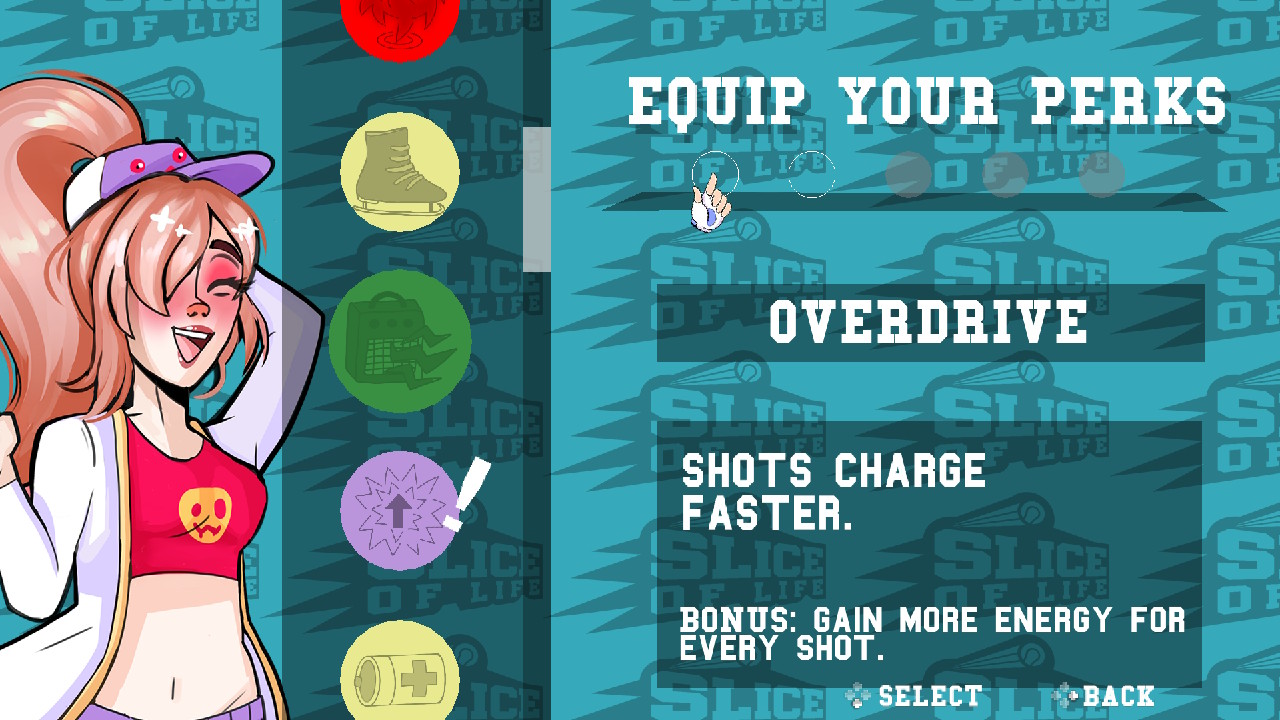 Once you go into the actual tennis, it will take a while to get used to the timing, but you’ll have four different shots in your aresenal (dive, drop, lob, and standard) and you’ll mainly be doing the five sub-games that goes along with your five teammates. Depending on who you’re practicing with, or who you’re trying to befriend at the moment, your practice game will change up. There is a Space Invaders-esque game, one where you rally the ball and try to have it on your opponents side when the timer goes off, one where you travel the court to gather hearts while keeping the rally, get points through hitting the ball through rings, and one that is more like regular tennis, but both players have health that is damaged by scoring (and this one seems to be the hardest as the Ai is on expert). There isn’t much of regular Tennis outside of story-related practice and championship matches. Practicing should then grant you some experience to level Drake up so he can equip more perks, though it weirdly stopped giving me experience outside of story-related matches (I still made it to the Finals though).

However, I really feel that Slide of Life needs a tutorial. Or well, a better one as there technically is a tutorial right at the beginning (that may or may not be in Drake’s dream), but it goes by so fast. It quickly shows you that you can charge shots and there is a diving shot before putting you in a two serve practice with Brad (goddammit Brad) which most likely will go quickly before being thrown in. At least for me, a hands on tutorial that makes sure you know how to play is more beneficial (if not needed) for sports games and I myself was confused until the start of Chapter 2. And this did cause some annoyance with the game as there are other things that aren’t explained either. What’s energy? What does it mean when Drake has that Sparkly effect? Can you actually aim the ball or is it random? Why doesn’t the dive shot work the times when I actually need it? What’s the difference between all the different shots?

It seems energy is the sparkly effect Drake gets with each successful hit, you can kind of aim the ball but not really as it’s a toss up if it’ll aim where you’re aiming, the dive shot is dependent on your energy (even though the game’s own tutorial doesn’t show Drake with the energy sparkles), and even though standard and drop shot seems the same, drop shot is for when you’re up close to barely get the ball over the net and lob will lob it right to the edge (which is a pain if your opponent does it). 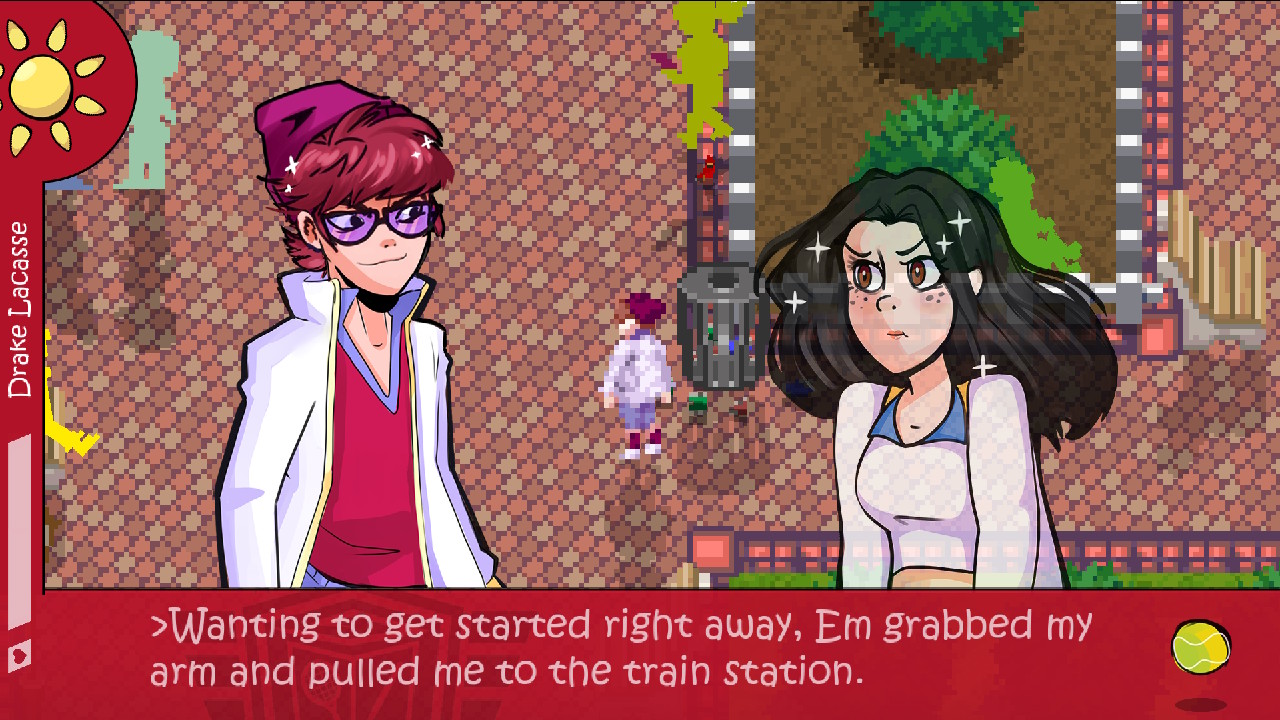 For the most part, the difficulty curve is good. There is that one sub-game that is very hard like I mentioned before, but Scarlet’s single match also had the problem of being with on expert and demolished me until I gave up, clicked “Return to Menu” thinking it meant main menu, and got surprised when it put me back to the loadout (which it really should be renamed to return to loadout or return to coach or something) and Scarlet’s AI just let me win when I returned. Other than that, the difficulty is pretty good as the next matches bring in the challenge while giving you chances to score.

In terms of your own partner’s AI, it does seem to be good as well. From playing, it seems to try and detect your movement it won’t go for the ball if it predicts that you will and it won’t go for it if it’s hit pretty close to you. And it does have a tendency to hit the shots aimed at the back if you’re in the front. Of course, there are moments where your partner won’t even bother, run towards and turn around after you realize it’s going for it (I’m guessing it assuming you’ll get it instead), and just swinging too soon. It actually does pretty well when you put it by itself, but that of course won’t give you easy wins as the ball will eventually come towards your idle character and your partner isn’t allowed to receive a served ball.

While this plays well on the Switch, it is pretty buggy as of Version 1.03; ranging from small bugs that don’t really hurt in the long run to crashes. The developer is working on smoothing it out though. 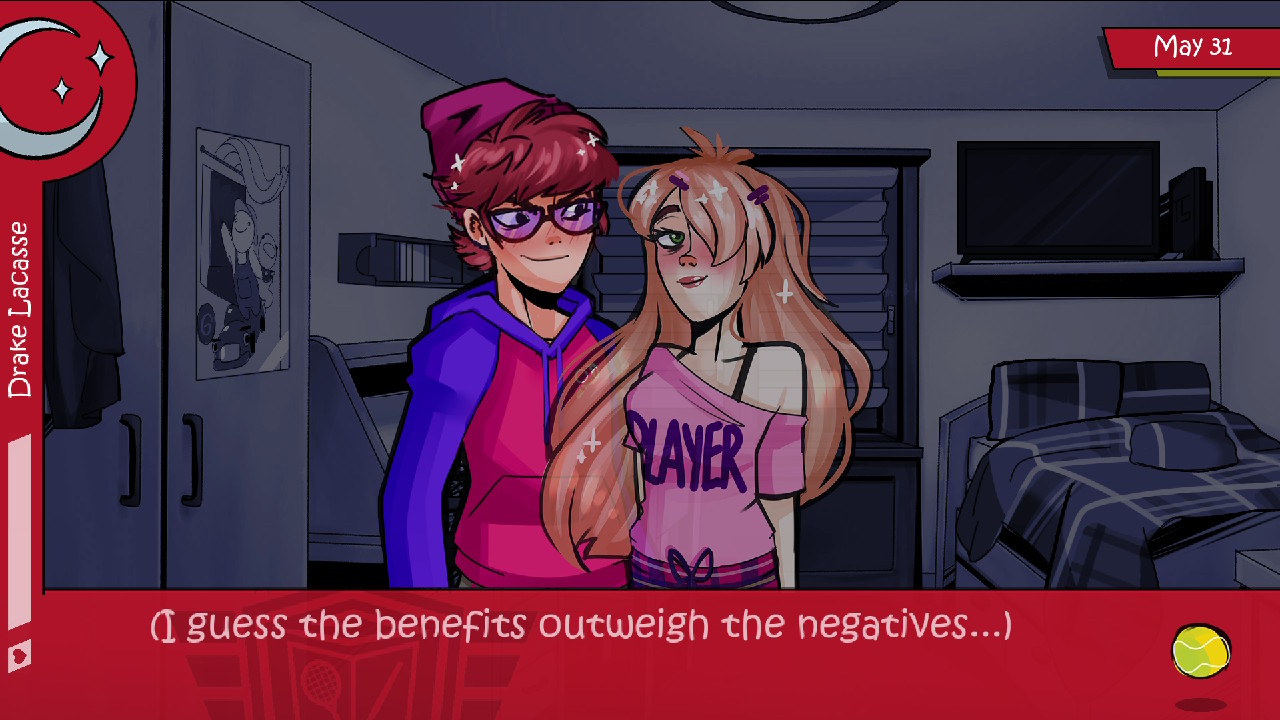 While I do have my own complaints on Slice of Life, it is an enjoyable game once you get used to and slice through it. Along with the mysteries the story opens up being interesting enough to continue playing to find out the truth and getting to know the characters was pretty nice (it even seems they have different dialog depending on the location you take them to, revealing a different aspect that you won’t really notice unless you replay it). It also certainly helps that the price is in a good range, which even if there weren’t any bugs around I have gotten around 11 hours just in the story mode. And honestly, I wasn’t really expecting this much.

I wouldn’t recommend this if you don’t want an arcade-y tennis game with five other alternate sub-games, but it’s worth it if you do.