Agony, but fun to play.

Back from the Grave

Agony’s big-breasted demons exerted quite an influence on horror lovers, but the disappointment was even higher than the anticipation. Most of the game was spent confusingly sneaking around ugly mazes. Madmind Studio salvaged its game with an Unrated version that added a Succubus mode, trading difficult stealth for easy violence. This additional mode has now been fleshed out into an entire new game. Let’s see whether the result is more in line with what the audience has been expecting since Agony’s reveal!

After the grandiose music theme, Succubus immediately marks a difference with its predecessor: this is not a walking simulator nor a game of hide and seek in a maze, this is an arena brawler! There is no overcomplicated story told through written notes, but rather a refreshingly simple plot: our succubus got her wings ripped out, so she is out for revenge. Besides that current quest, all that drives her are her thirst for sex and violence. And both will be provided during the course of the game. 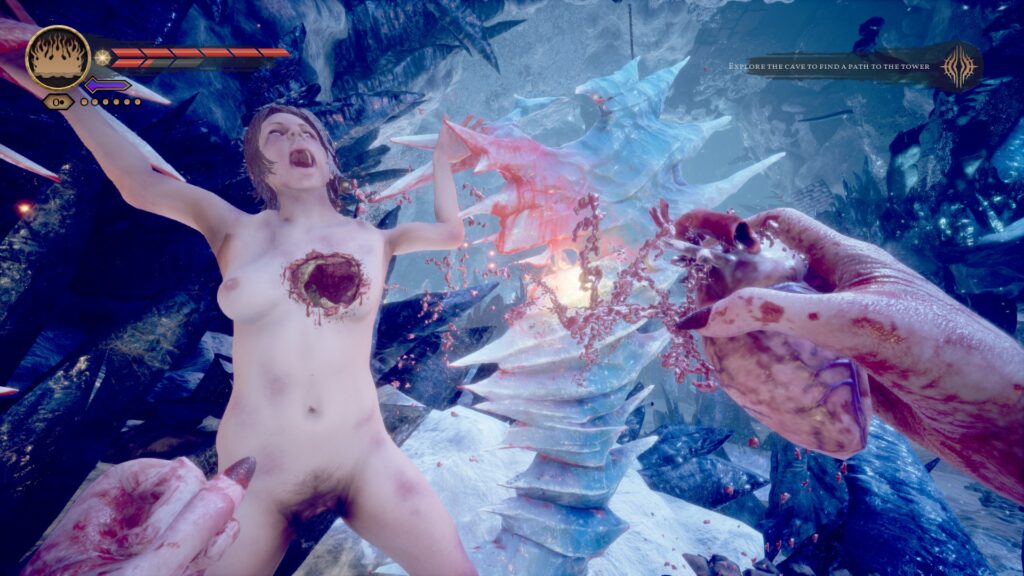 Immediately after the first level, the player gets introduced to Vydija’s lair. Here, you will be able to customize her appearance (hair, horns, boobs, skin color, thin or flabby: play doll with your succubus!) and decorate her rooms (do you prefer guts spilling from the ceiling, or an arch of bones?). There, she will also find the opportunity to rest in her bed, take a bath, or sit on her throne, legs spread wide open… There are different armor/clothes for you to find, but you can always deactivate them to display Vydija in her natural glory without downloading a nude mod. Provided that you activated the relevant free DLC, the game is completely uncensored. On a table, you can access Hell’s map and pick among the available levels for you to play or replay. 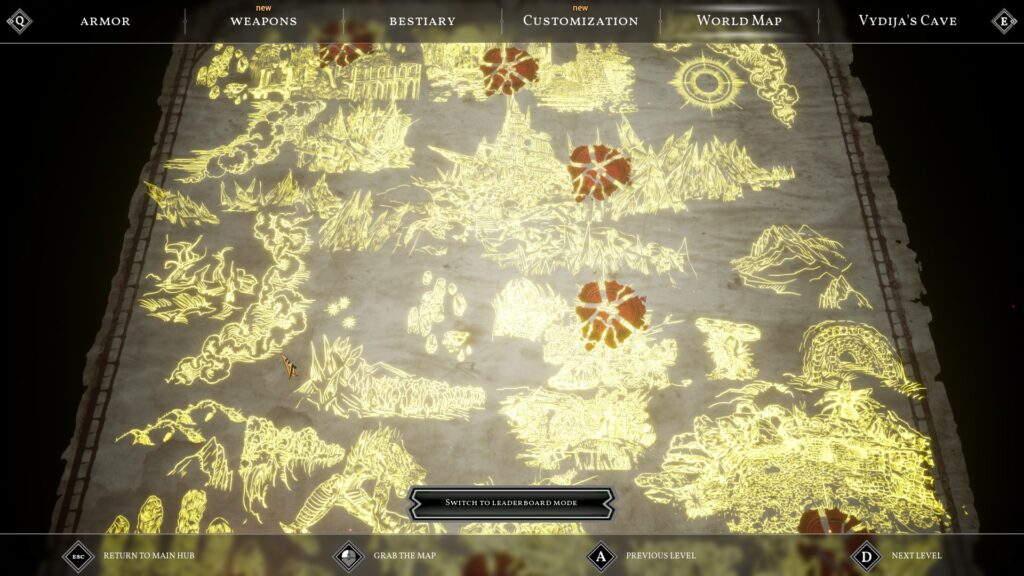 Each level is a series of arena fights, with boss fights and some mild exploration sprinkled on top. To 100% the game you will have to complete some additional side-quests, such as finding and killing all the demon babies, finishing the level under a certain time, or taking less than 1,000 points of damage. I rose up to the challenge, and only experienced rage and frustration once: one of the later levels, in which you have to throw exploding eggs onto imps’ nests. The enemies and imps keep getting in the way and the eggs explode before they reach their destination, and this level is full of gooey poison that spreads over your screen and prevents visibility. This one level was a nightmare, but overall, they were rather well balanced and well crafted. And I kept stopping in my tracks to take screenshots of the architecture of flesh and bones. 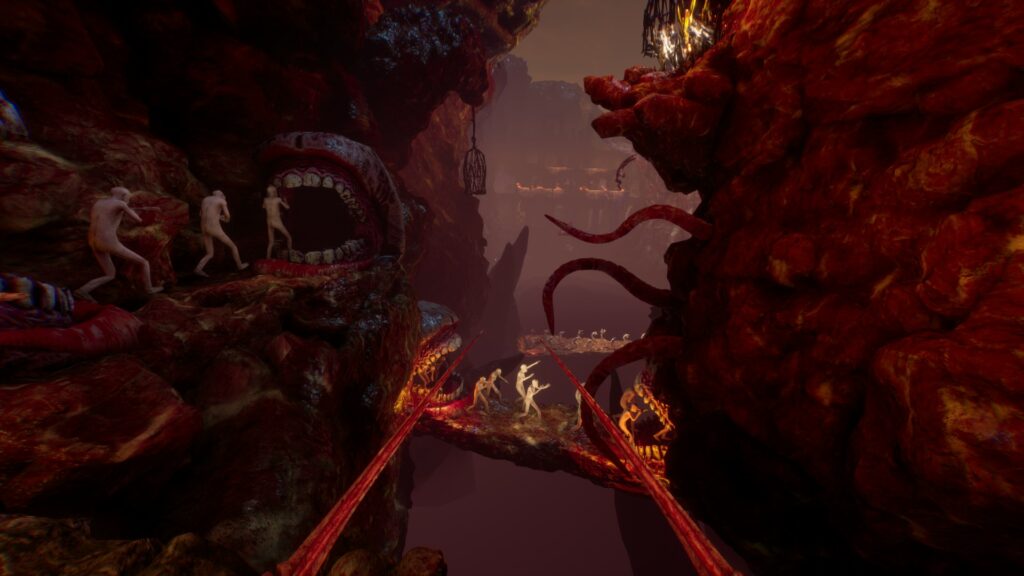 While I was missing some of the more refined landscapes and strange structures that we occasionally witnessed in Agony, Succubus has no ugly area like the forests and mazes from the first game. Instead, we have a messy but gorgeously twisted vision of Hell, with some of the best-looking doors I have ever seen. Just the doors themselves were welcome additions to my desktop wallpaper collection. As there is no button for jumping (presumably to avoid cheating against mostly melee enemies), navigating the levels is fairly straightforward. When larger gaps need to be crossed, the game switches to a third-person view for short climbing sequences. Buttons and destructible areas necessary for progression are highlighted, and there is a button to mark the objective on the screen. Unlike in Agony, you won’t get lost. Although the game’s primary focus is on combat, the layout is interesting to explore and I always enjoyed throwing myself into a Succubus level, whereas I used to rage quit a lot in Agony. 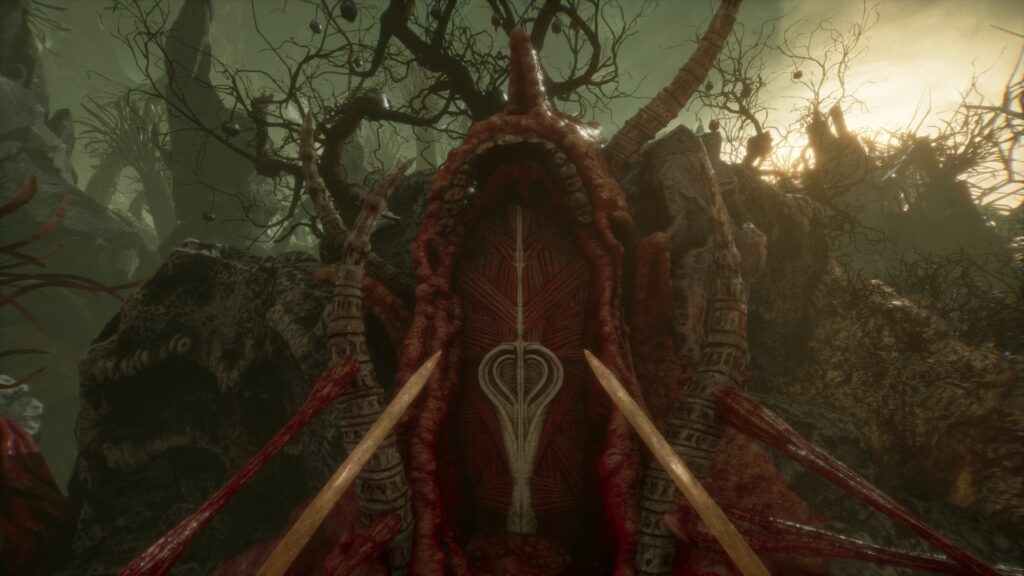 Kill Anything That Moves

Time spent in Succubus is mostly time spent in combat. Sadly, this is going to be hit and miss depending on the player. There are all sorts of melee weapons to unlock, and also some powers/spells assigned to the different armors. Most spells are useless, clunky to use, with strange hit detection or lackluster damage. You will have to wait for about 2/3rd of the game to finally unlock better spells. Let’s forget about them and focus on melee combat. Unfortunately, there is no block button. The enemies also don’t really telegraph their attacks. You are just hacking and slashing through crowds of enemies rushing at you, with absolutely no subtlety. The only concession is a stagger/glory kill system similar to the recent DOOM games: execute a highlighted enemy to recover a small portion of health (less and less health recovered as you increase the difficulty). The combat system is rather brainless, so anyone looking forward to something more technical will be disappointed. However, strangely, this is also why I enjoyed playing the game: simple, continuous, effective massacre. Brain on OFF, ultraviolence on ON. Succubus is super brutal. Sword finishers will cut enemies in half. Staffs will break bones. Enemies fly off everywhere, preferably on spikes. Just like in Dark Messiah and Bulletstorm, the levels are filled with all sorts of traps. Lava, tentacles, spikes, iron maidens, butcher hooks, and so on. You can kick almost all enemy types into them for instant death, along with exaggerated ragdoll physics. This is a blast to play. Oh, and try to unlock the best javelin/trident as quickly as possible: it’s the most satisfying weapon in the game (well, war hammers are pretty fun too). You can throw the spear and skewer several enemies on it, leaving them hanging on a nearby wall like modern art. In Succubus, violence is exquisite. A caveat: at higher difficulties, enemies get more health and react in a less satisfying manner to your attacks. Therefore, I suggest that Story Mode is the best way to enjoy this particular game (I switched to Hard Mode for the side-quests that require it – which is a strange design decision, by the way). 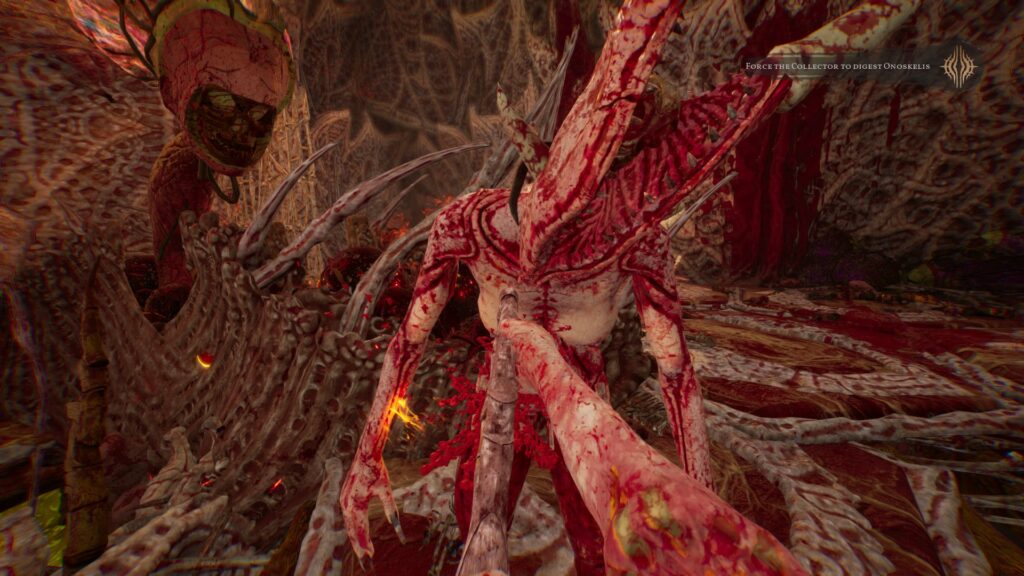 Apart from executing fighters to regain health, you can also stomp on demon babies, or torture innocent victims (well, maybe not so innocent if they ended up in this place). These scenes are quite gruesome, such as stroking a guy’s dick before ripping it off or borrowing a pregnant woman’s fetus before giving it back right from where you pulled it. This game is unabashedly immoral, which is refreshing as we are currently in the middle of an era of extreme political correctness. 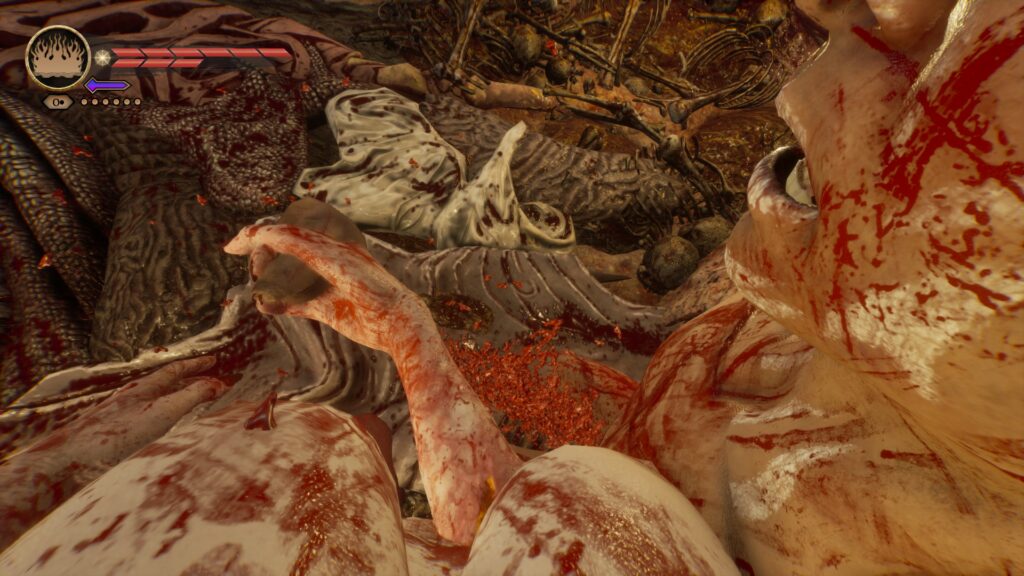 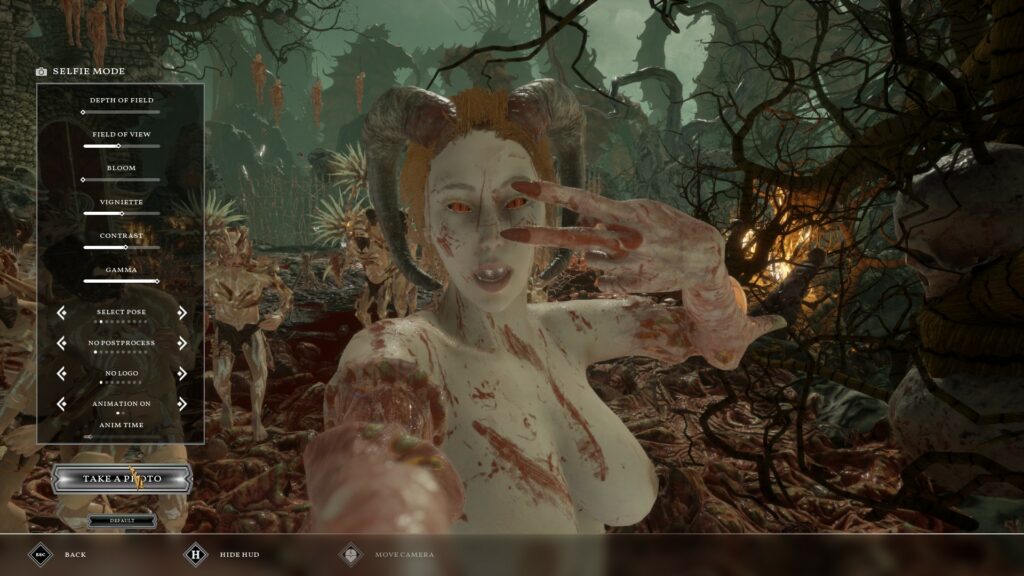 Not the Smoothest Ride

The art direction is striking and worth playing just to gaze upon the twisted landscapes and creatures of Hell. While the post-processing effects looked less cinematic than in Agony Unrated, the game runs much smoother, and the new character models look great; a lot of progress has been made since the initial Agony. The game runs well with high settings on my ageing machine, but it is not perfect, there are technical issues here and there, mostly collision issues. The initial key binding is slightly confusing and takes a while to get used to (here is my variation: SPACE to display objectives, SHIFT to dash, E to pull/execute, F to push/kick). The wording of the side-quests is sometimes misleading. 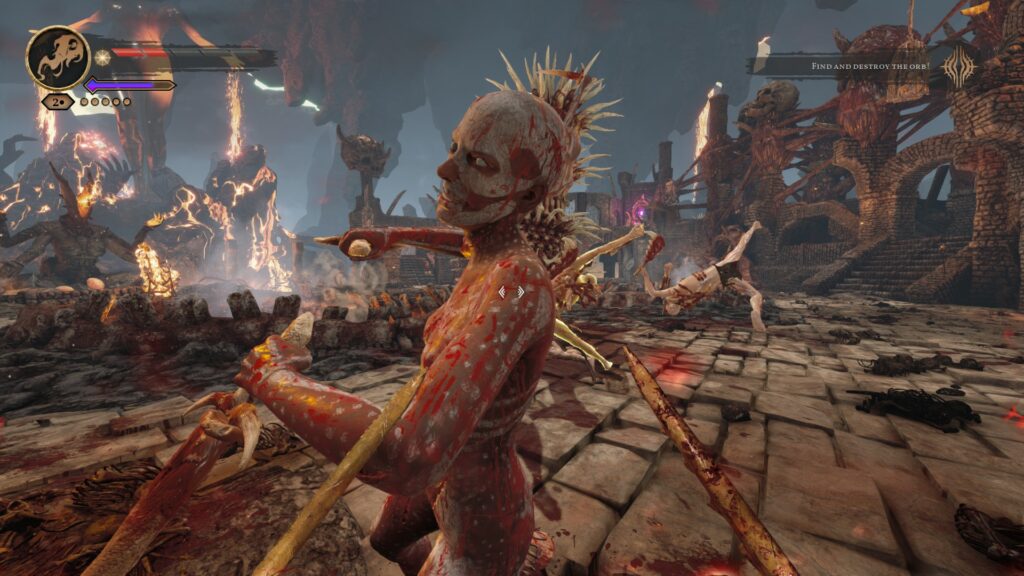 To 100% the game with all side-quests, it took me 20 hours (and I wasn’t bored a second), without any side-quests rushing through the end should take between 6 to 10 hours. Since the levels are focused on combat, they are highly replayable, with even a leaderboard to motivate you. Each run gives you a currency to purchase new armor and weapons. As soon as a weapon is available, you can purchase different version that deal increasingly higher damage. I was glad that I could directly purchase the best version of each weapon, but then I wonder what was the point of modelling a dozen skins for intermediate weapons that no one will ever pick. This flawed progression system, added to the lack of a block move, show that while Madmind Studio is getting better at making games, the studio still needs to hone its skills and improve on game design to keep up with its excellent artistic output. 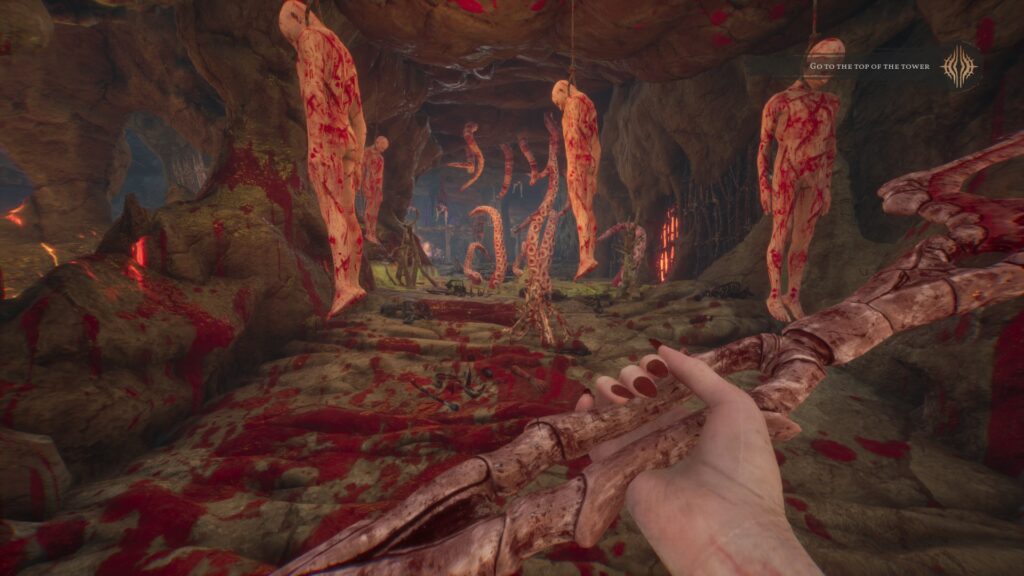 If you adhere to Agony and Succubus’ peculiar vision of Hell, then this time Madmind Studio has delivered an actually enjoyable game that completely delivers in the fanservice department: combat is brutal and immensely satisfying with powerful weapons that launch enemies into traps, and the sexual component of the game is available at your leisure. If you are into horror, the whole game is sick eye-candy. Completely decadent, perverse and gratuitous. But if the visuals and themes are not your cup of (hot lava) tea, then there is little for you to find in Succubus.