You are in Hell, and your torment is to play this game.

Agony benefited from a very good marketing campaign based on its ludicrous art reminiscent of Clive Barker’s twisted vision of Hell (check out the Hellraiser movies to discover the pleasures of pain and how far skin can be stretched). Expectations were high, horror fans were looking forward to the next gory nightmare-fueled adventure, and then the game came out.

On the day of release, Agony’s reception was lukewarm, to say the least. And here I thought “It can’t be that bad.” I started the game and found myself at the feet of some fortress that would make H. R. Giger proud. Overwhelming walls of bones lead me to an antechamber of flesh, sending goosebumps down my spine. These visions of awe completely won me over, and I became that annoying tourist pulling his camera and taking pictures of every possible angle. Statues of demons with their head split in half made me sweat with anticipation as I passed the doors. This is going to be good, why would anyone complain about this game. 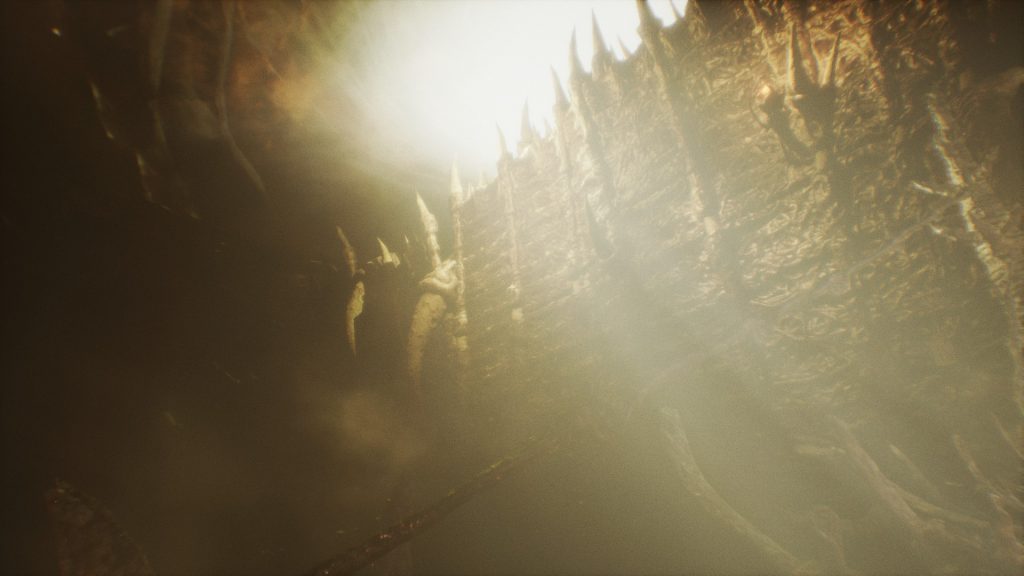 The next door would not open to my summons, I had to go find some hearts to drop on scales. And this led me to a system of… caves. And not the sort of fantastic caves that Dear Esther offered us six years ago, but ugly, boring caves with a confusing layout that had me going in circles. The caves were populated with incredibly ugly NPCs whose lips did not open when they spoke their uninteresting lines about the Red Goddess. Horrific scenes were very basic and poorly executed, nothing really nightmarish, impactful, or making my skin crawl. 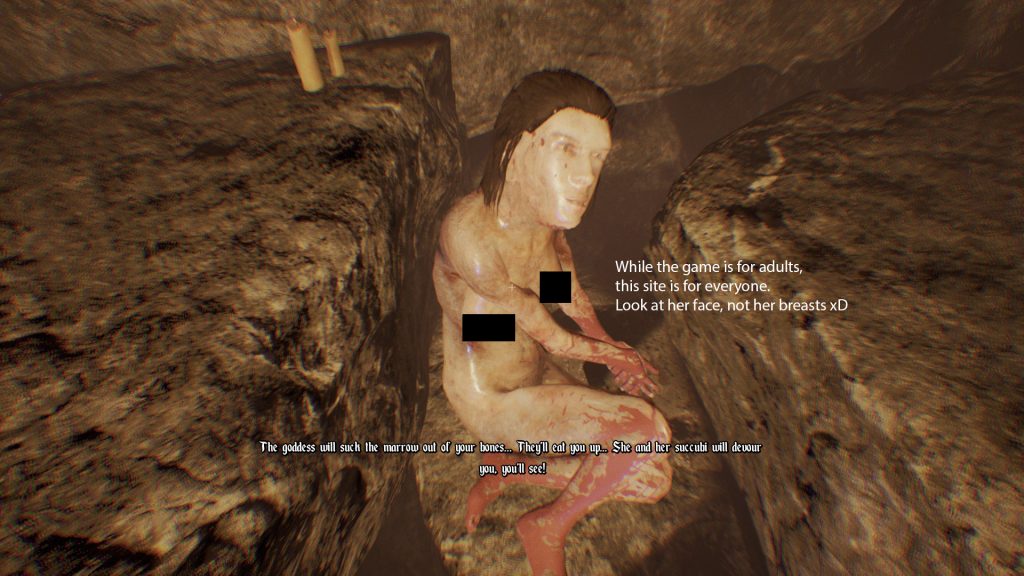 Letters to the Devil

For some reason, our character is looking for the Red Goddess and has to navigate through her domains in Hell to reach her. The backstory is mainly told in the most boring way through letters (where do you find ink and paper in Hell?) that I quickly skimmed. I am an avid book reader, but games are an interactive and visual media with their own way of telling stories. Even though I was sick of wasting time reading notes, I must admit that they provided a few hints relative to the systems of the game. 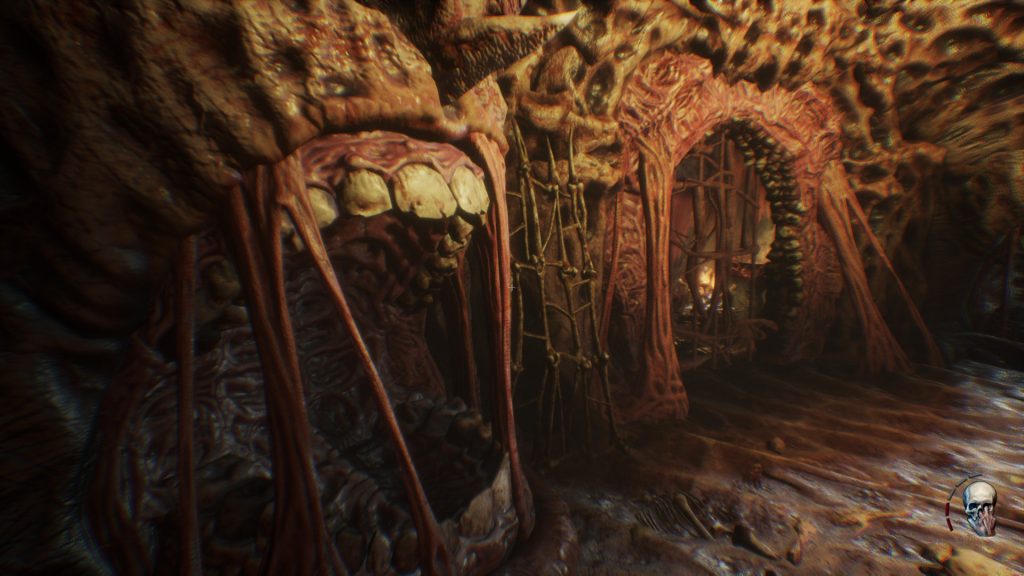 “Let’s make a game,” they said. “Not one of these useless walking simulators, we want the player to have stuff to do. This is Hell, not a walk by the seaside! Let’s do something like Amnesia!”. And then, Agony became a stealth game. There are demons roaming in some areas, and when the player walks nearby they give chase and kill the player. Upon death, the player becomes a spirit and can respawn inside the human NPCs in the area, provided that the bag on their head has been removed (they look better with a bag). Failure to find them or being grabbed by an aerial tentacle monster results in respawning at a previous checkpoint. Physical progress in the game is saved and collectibles are saved, just mission items need to be picked up again (which is still annoying in and of itself). And… that’s it. Roam around in a confusing maze-like layout, avoid demons, pick up items and bring them back to the roadblock. Or not. 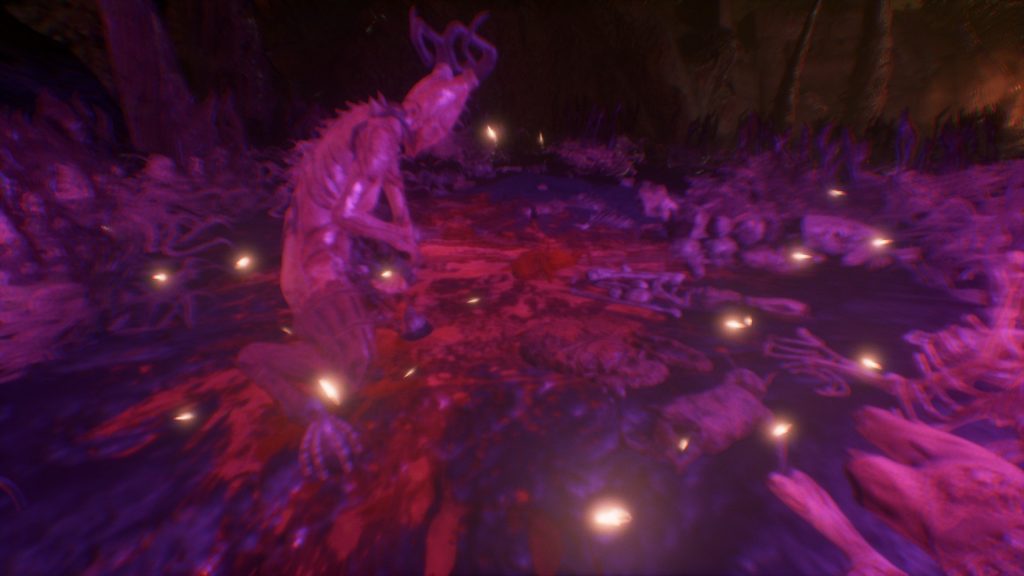 There is a hint system that consists of several rays of light traveling towards the objective. Not towards the items that need to be found, but towards the next area. Somehow, I went past the things to collect and that was just fine. After the first mission with hearts, I never knew why I had to pick up stuff anyway. I like the presence of that light because the levels are so confusing, but I felt that following it made me miss half the stuff. When I could follow it, since sometimes it did not seem to know where to go by itself, it would drastically change direction all of a sudden. 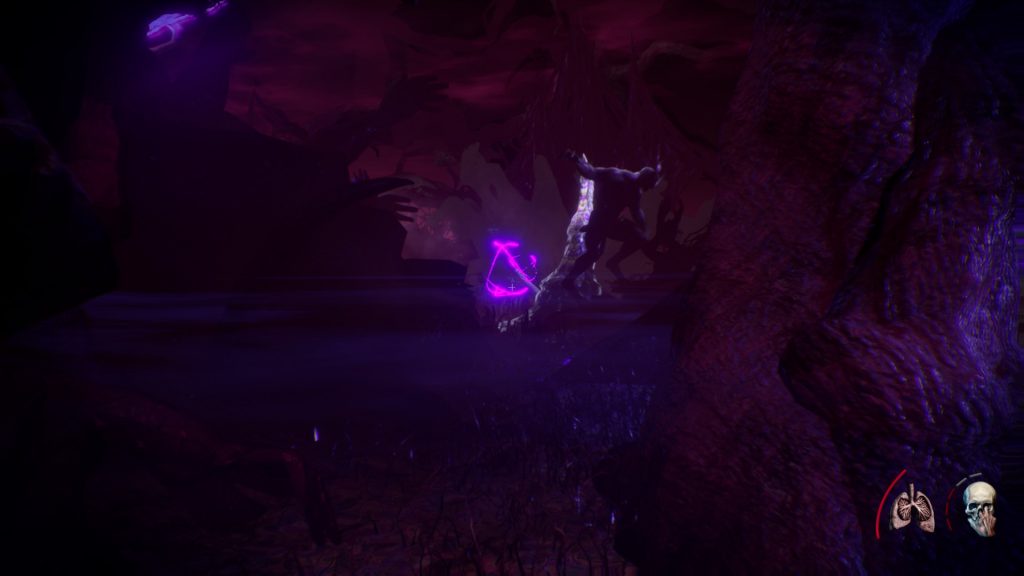 Several things can be burned with a torch to give access to a secret or another part of the level. Burnable surfaces are highlighted by the game, and some similar surfaces that are not highlighted cannot be burned even though it would have been logical that everything made of the same material has the same behavior. In any case, the game is so dark that the torch is often mandatory to see anything. 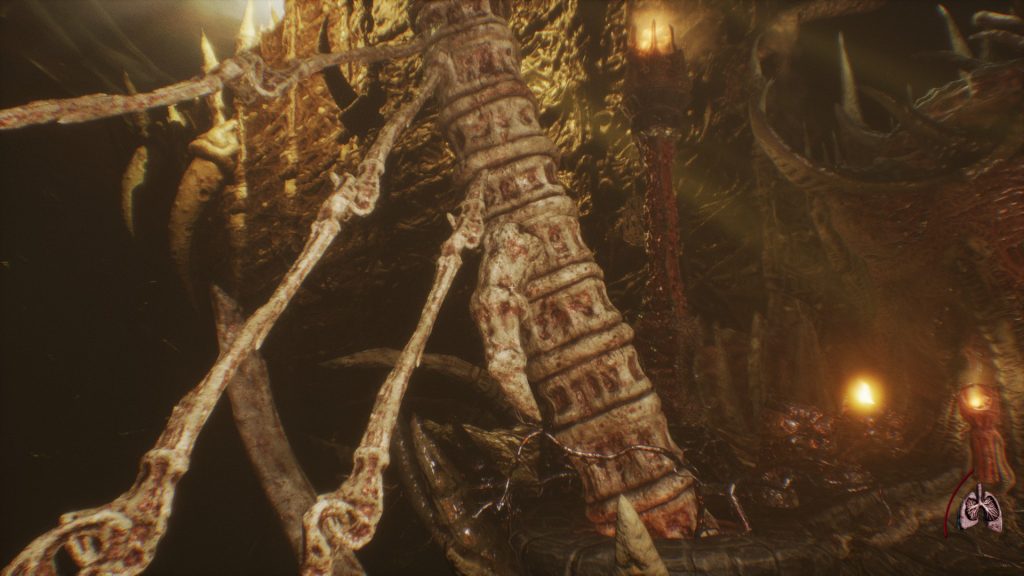 Another thing to do is solve some occasional sigil puzzles to open a door. Sigils have to be found in the level, examined by the character to be memorized, and then drawn on the altar. The problem is, the right sigil can be tricky to find, and only one sigil can be memorized and tried. I appreciate that a little investigation is required, but overall it just adds unnecessary backtracking and time wasting. 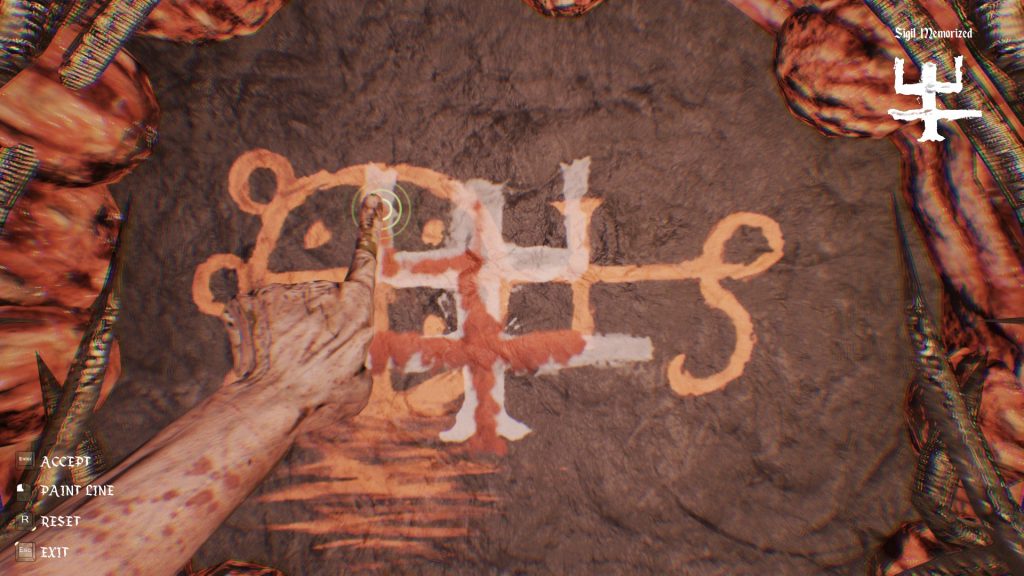 You can be a Demon (but don’t get excited)

Once enough skill points have been acquired and used in a more than confusing interface, the main character can possess the body of demons rather than contend with simple humans. While this sounds cool, in reality, it’s absolutely not desired since the demon cannot use the light path to see where to go, cannot pick up items, and finally the satisfaction of blowing up humans is quickly defused by the horrific realization that they were respawn vessels. 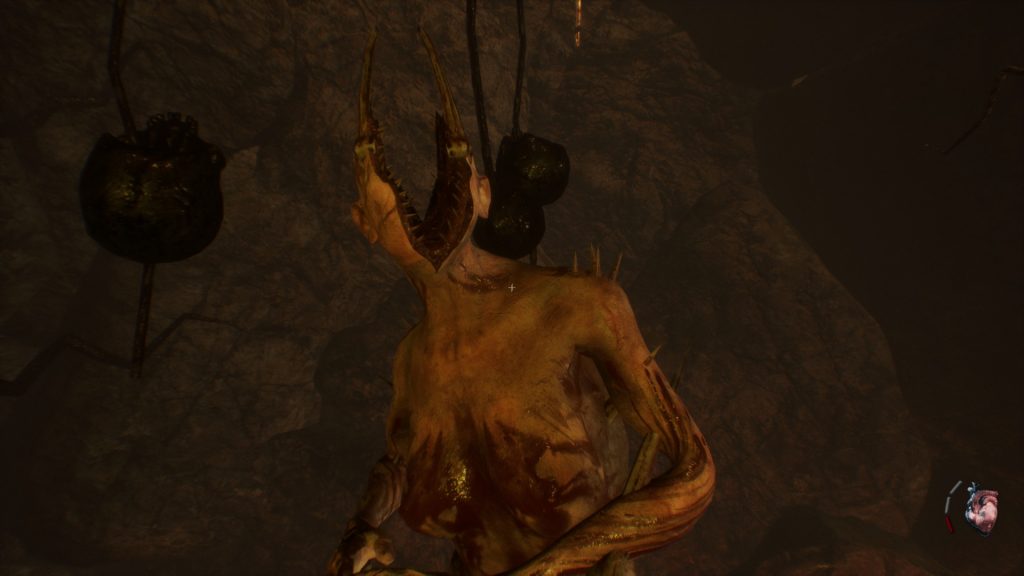 While I praised the art direction in my opening paragraph, the cool stuff is spread thin and very much apart. And there is often an awful bloom filter to turn the screen to soup and prevent from admiring the textures. Besides the occasional cool sights, most of the game takes places in caves or dark forests or any other awful location that is both ugly to behold and confusing to navigate, without enough landmarks to get our bearings. I was often squinting my eyes to try to see what was around me. Such a shame that this is where players are forced to spend most of their time! The colors are also sometimes all over the place, with weird pink and purple magic lights that have nothing to do with a game themed around Hell. 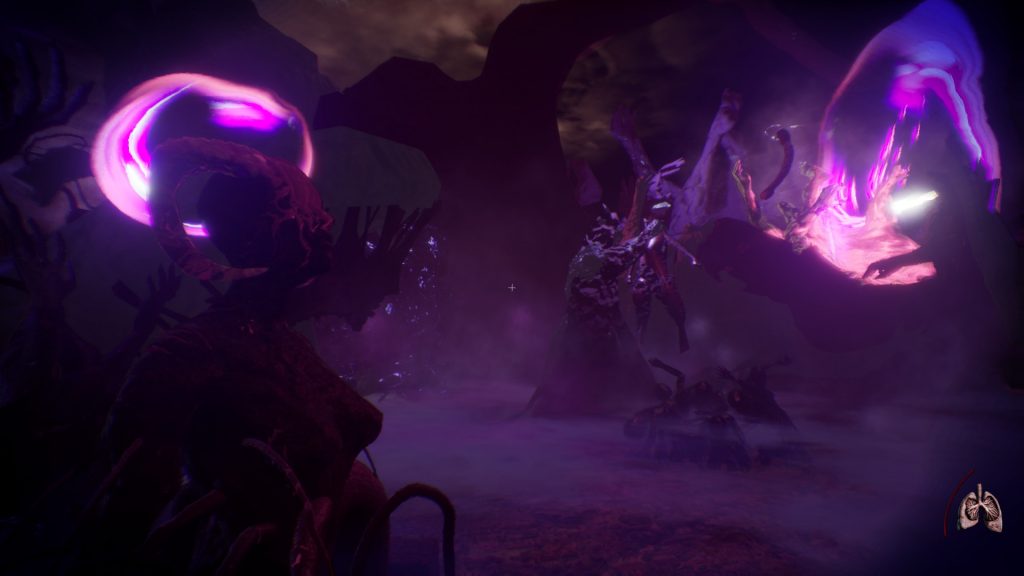 I have had enough

I can’t convey enough how awful the roaming sequences are. Confused by what to do, confused by the layout, confused by the lights, blocked by small obstacles invisible in the dark, annoyed by enemies. There was nothing enjoyable about this experience, it was rather an exercise in frustration. Did anyone ever play-test this during development? And let’s not talk about the area in which you can freeze to death while you explore (allow me to remind you that the game takes place in Hell). I played when the game had a few patches under its belly, and it was still an obnoxious experience. 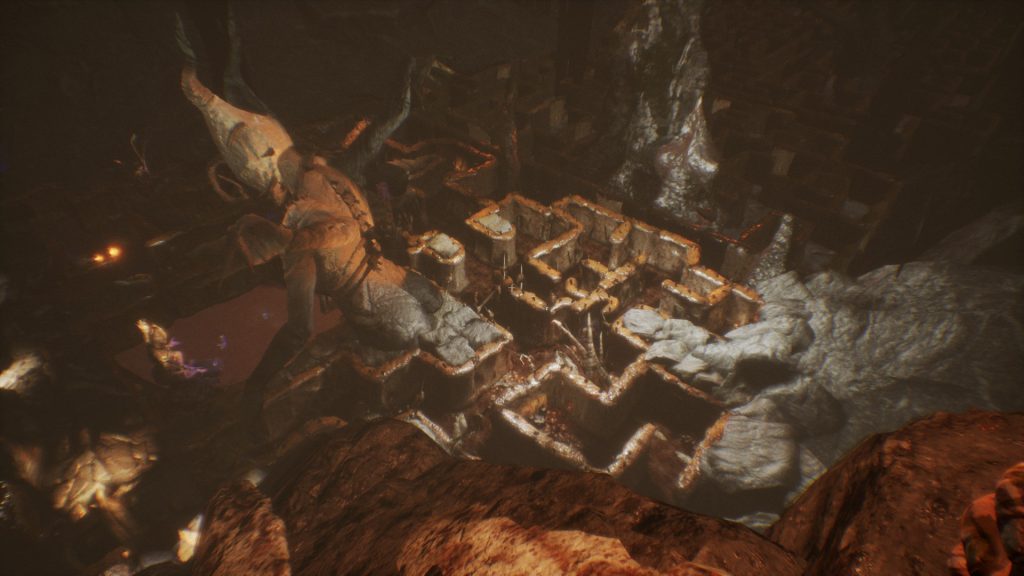 What could have been

The only non-contemplative section that I actually enjoyed was an invisible monster killing me slowly in an obscure area, and I had to find a way to get a torch there to be left alone. That’s it, a combination of light puzzle element and scare, very effective without needing to use boring stealth mechanics. This game would have worked much better in short vignettes, or even simply as a walking simulator. I was happy just being a tourist right at the start, and I would have preferred a short time enjoying twisted sceneries than a boring haul through dull levels filled with time wasters. 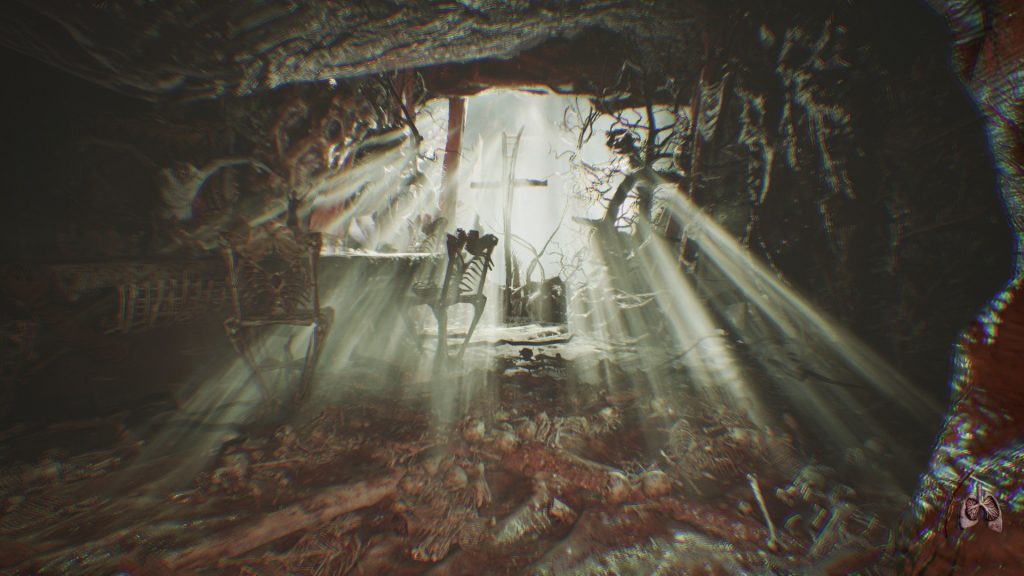 At almost $30 on PC, the game is way too expensive for what it delivers. The developers tried to punch above their weight and spread the content over eight to ten hours with filler butter. The graphics and fun are not on par with AAA games; it should have been a typical nice and short indie game. Since I was talking about the graphics, the game’s framerate can sometimes drop dramatically for entire areas, but since this game does not require shooting or twitch reactions then I did not feel hindered by that. Although, there are some nasty collision issues. One time, I was stuck between the floor and the ceiling. Even when I went back to my incorporeal form, I was still stuck. 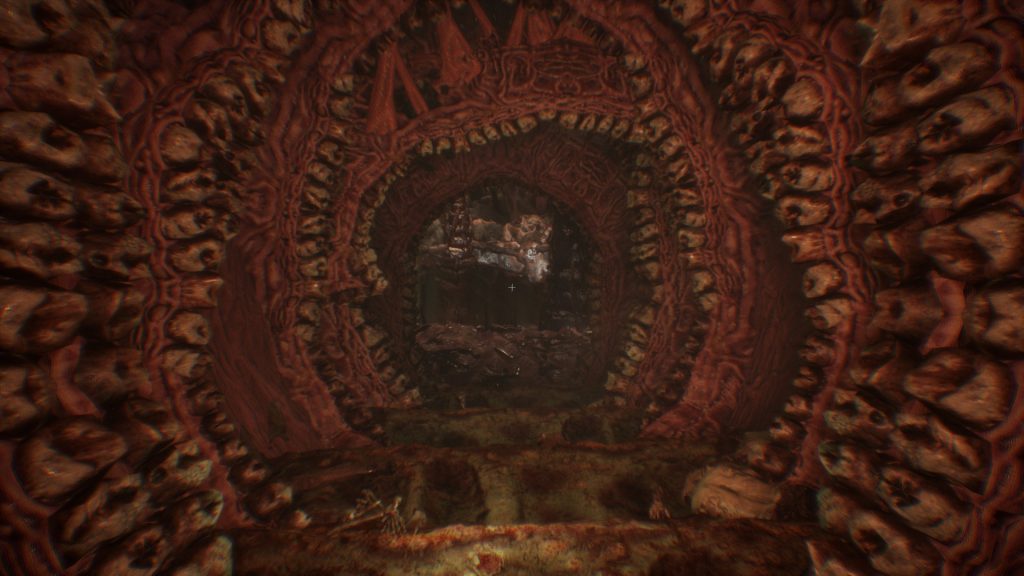 Nonetheless, some sights are incredible and might very well end up as my wallpaper. Also, the sound design is excellent and there is dread in hearing screams or grunting in the vicinity. 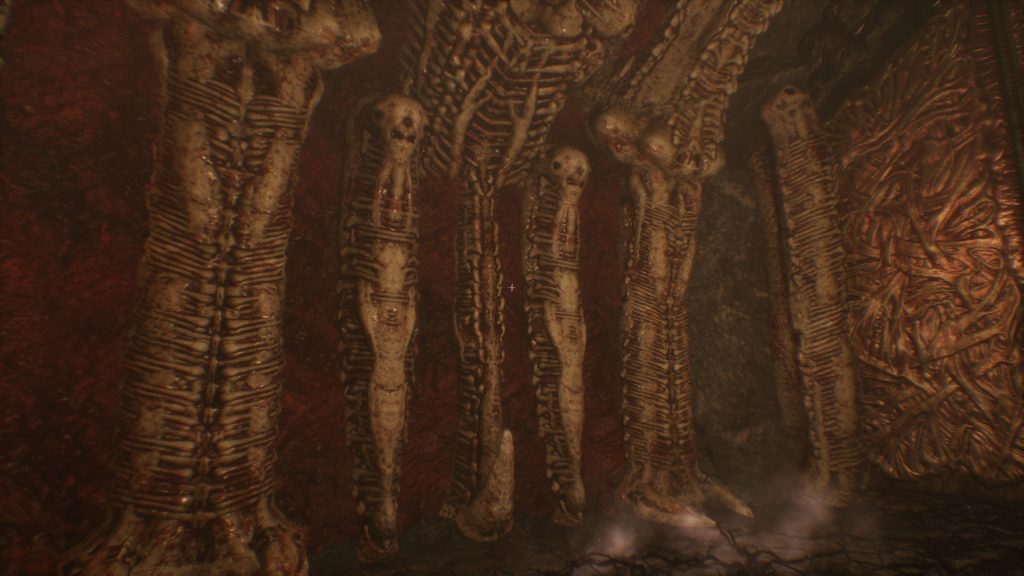 There are breasts, penises and vagina apples in the game, it’s clearly a game for adults. Apparently, two out of the seven endings had to be censored. I am more annoyed by the knowledge that there are seven endings which means that the developers wasted precious time instead of polishing the adventure and that players are supposed to waste even more time. I certainly won’t find out, if I end up being curious I’d rather watch the videos on YouTube rather than suffer through the game. 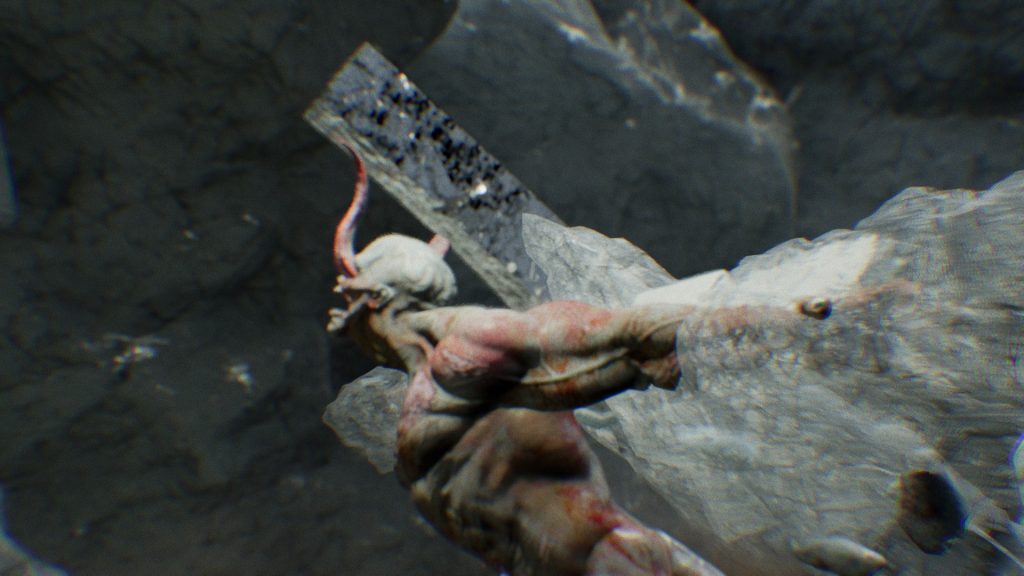 Since many people have made jokes about how Agony is what the player feels while playing this, I am going to reverse-joke and suggest that the game should be renamed Confusion. With that, everyone would be warned about what really transpires from this game. Confusion and frustration, rather than horror and contemplation. This game should have been short and sweet rather than stretched and filled with so many ugly levels and unwanted stealth sections.