A short visual novel about a post-apocalyptic world where oxygen is running low.

‘Hypoxia – One Last Breath’ is a short visual novel game taking place in a post-apocalyptic future with some interesting world-building ideas. It appears to be the first part of what might become an entire series. The game is free to play on Steam, so my review and rating will focus not on whether it’s worth your money, but rather if it’s worth your time. 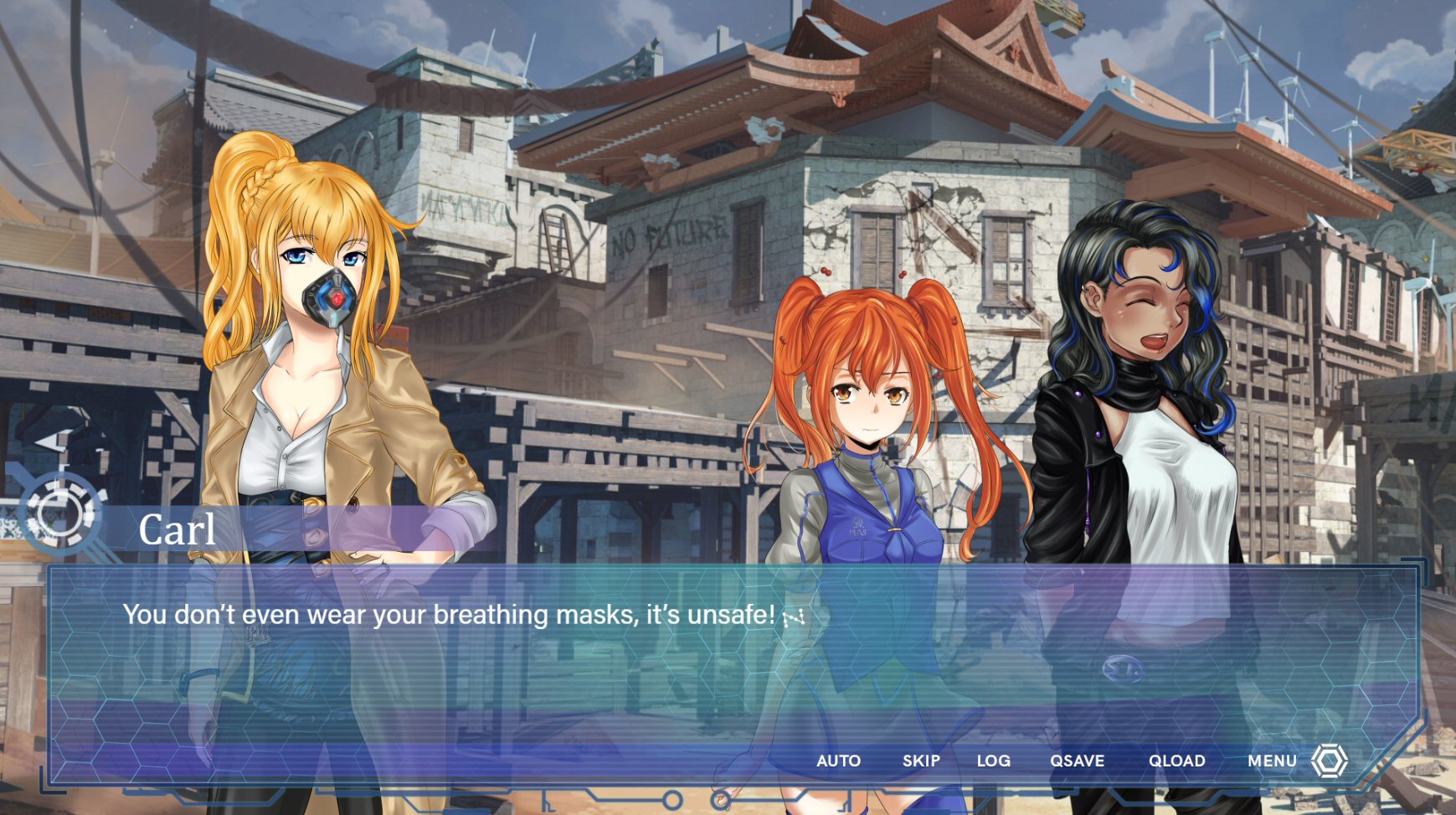 The main premise of the game’s world is that the amount of oxygen in the atmosphere has been decreasing very quickly over the years due to the presence of a mysterious Z-gas that reacts with oxygen and slowly depletes it in the atmosphere. As a result, humanity has built a huge dome where the most privileged people with a good status get to live, and everyone who is poorer has to live outside the dome, where low oxygen takes its toll on their health and where people are fighting each other for survival every day.

The main character is a new student in a prestigious science centre that studies innovations on improvements to the oxygen in the atmosphere so that humanity can once again live normally. There he meets an interesting, rather brazen, and highly attractive girl, Olivia, who seems to be hiding many secrets but with whom we develop a close friendship very quickly. 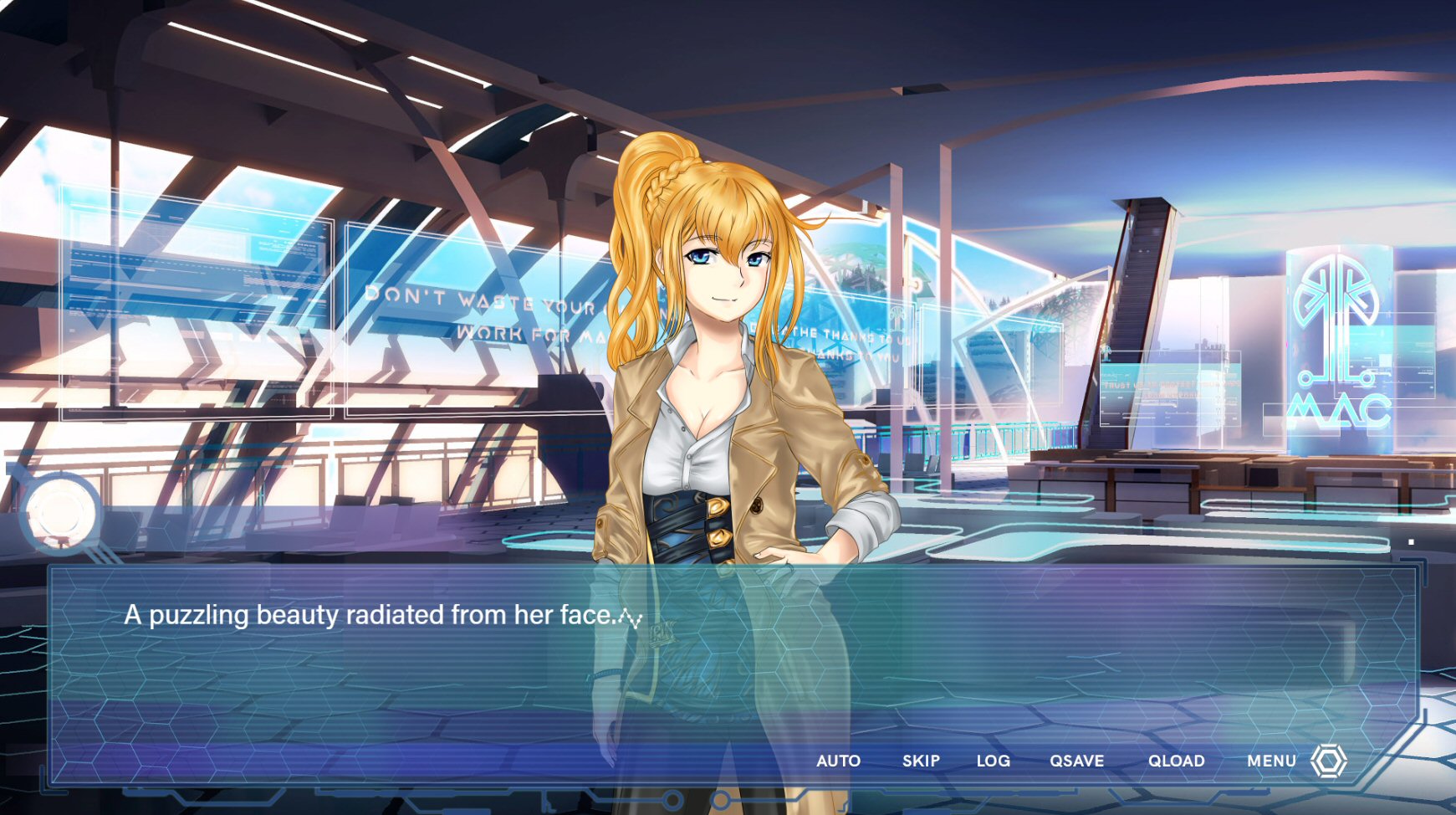 The two protagonists quickly find themselves on a dangerous mission, where their choices can have drastic outcomes.

There’s a very good bit of world-building in this game and the concept is interesting. It tackles some moral and political themes relating to the crisis in a pretty realistic manner too. The plot itself is a little slow at first, but picks up in the second half, where the stakes get high.

Since it’s a visual novel, there isn’t much gameplay here. Most of the gameplay there is involves making choices in some parts of the story. There aren’t many choices. Most of the story is linear and doesn’t change. The few choices the game has are rather substantial as they change the outcomes.

Most of these choices lead to early endings, which are deemed as bad endings. Some of them involve the player dying, others with the player simply failing quite dramatically. So when coming across each of these choices, I’d highly recommend to save your game. 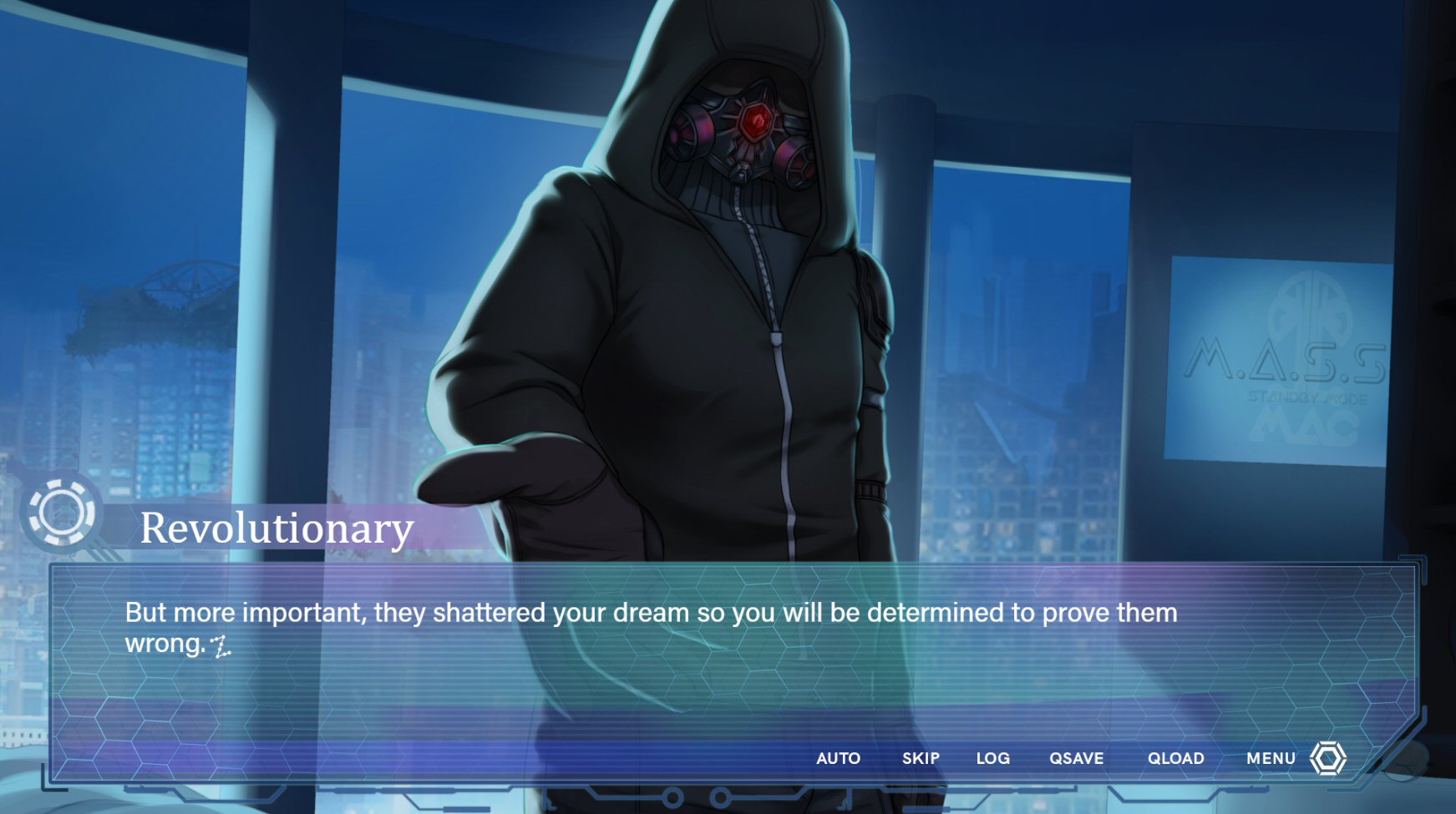 This leads me to a bit of critique regarding these choices. To know if the choice will lead to an early bad ending or not is not very intuitive or logical a lot of the time. I remember during one such choice, what seemed like the most logical thing to do ended up leading to a bad ending (with events that completely spiralled out of control down a slippery slope), and doing the less logical one is the one that continued the game due to sheer luck of the events that occurred that could’ve easily happened with the other choice too. In another such situation, it was between two risky choices, and in fact both of them led to danger, but one of them led to an early bad ending, and another led to a story branch that continued the game, and again there was no way to tell, because either of the two events could’ve happened with either choice. It’s the equivalent of a kind of story choice where you have two almost identical paths, but one path has a guy pop out of nowhere and kill you and the other has a guy pop out of nowhere and fail to kill you and there’s no reason why these outcomes couldn’t have happened other way round.

Being led to an early bad ending through sheer luck of unforeseen events felt a bit annoying, especially also that there’s a substantial dialogue happening with many such endings, so you don’t realise that you’re being led down an early ending and it feels like the game wasted your time.

Just remember to save every time you’re presented with a choice. 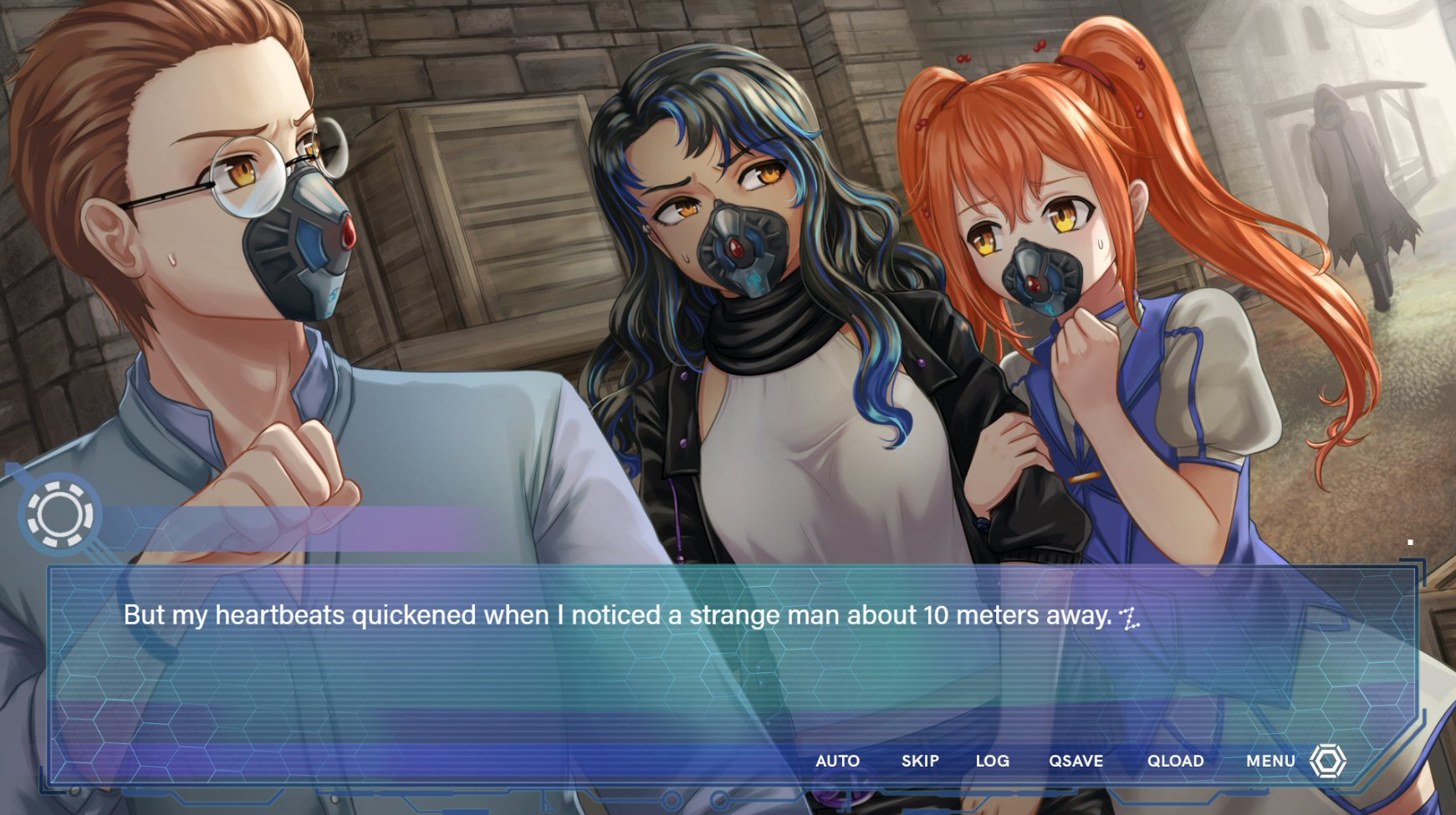 The visuals are pretty great. The backgrounds all provide a nice atmosphere of the kind of future the game is going for, with the areas inside the dome being shiny and polished, while areas outside the dome are run down and dirty. The character art is also in pretty good quality and has the anime aesthetic.

There are some scene pictures that come up during key story moments too, and these are especially drawn very well and look like screenshots from an actual Japanese cartoon. 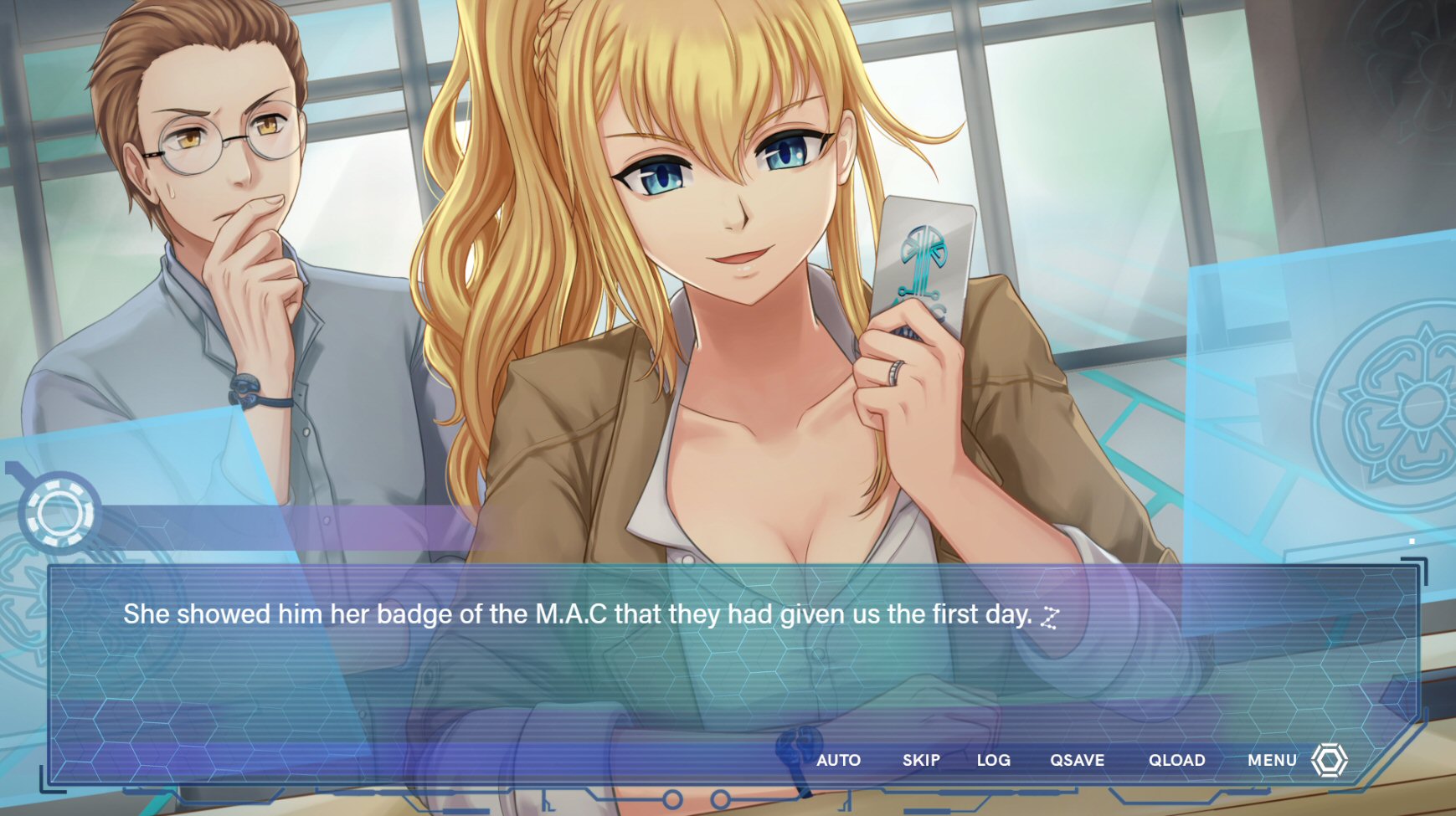 Music is fairly decent, although I felt that in some places it didn’t really fit the scene much. Most of it is your regular electronic sci-fi type of music. There’s no voice acting, but it’s not necessary as the game is a visual novel.

Now, because it’s a visual novel, there’s a fair bit of reading and dialogue. One thing I do have mixed feelings on though is that I felt there was too much narration going on, often involving info dumps and the like. I get it that the game world is pretty unique and so a lot of the backstory events and concepts need to be told to the player somehow, but on many occasions I felt that it kept ruining the flow of the dialogue we were in, because after every line or two, we’d be reading the character’s thoughts about some concept that the game has introduced. I think having this spread out a bit more or integrated better into actual dialogue lines would’ve been a better approach. 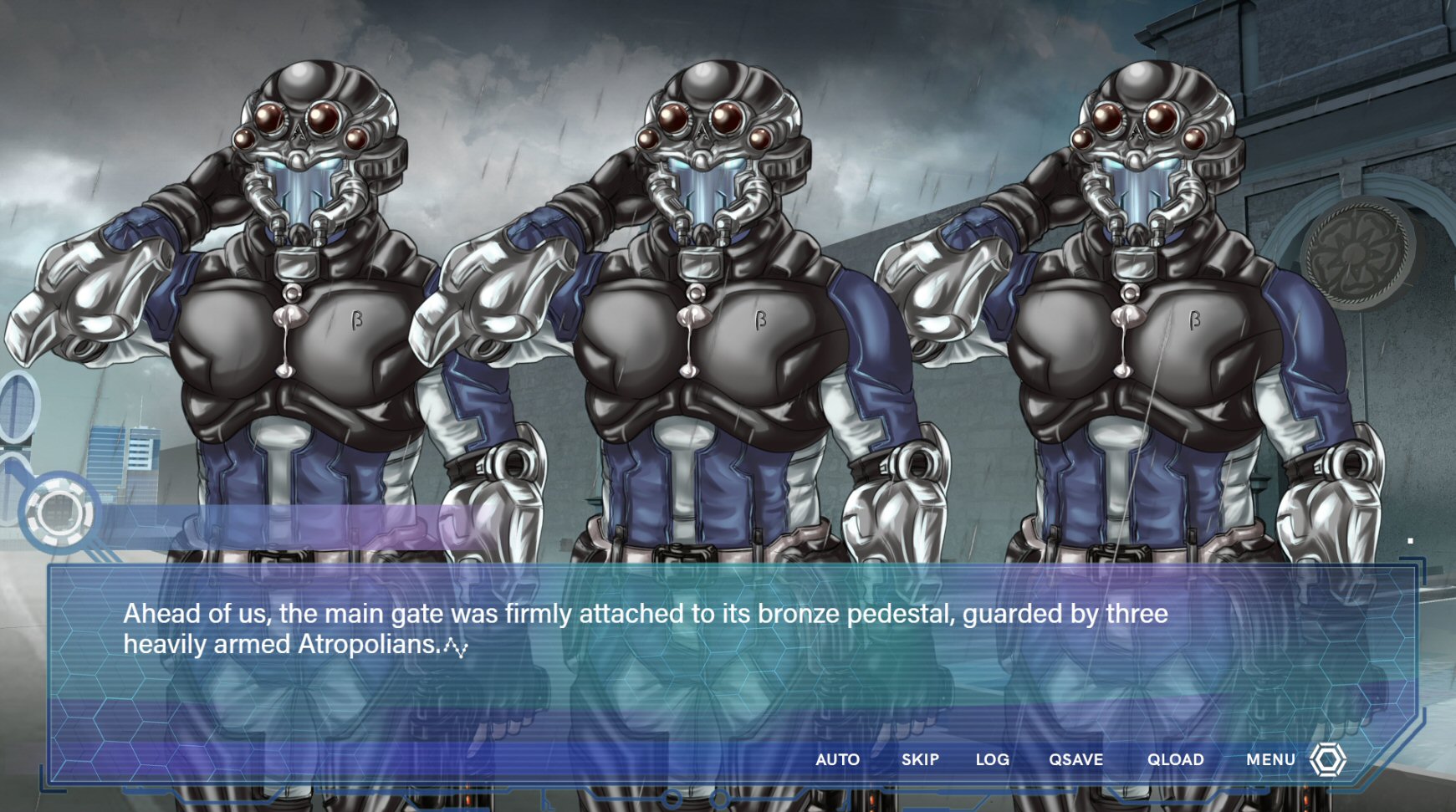 The same thing I feel also regarding more actiony moments. Many action parts weren’t actually shown, but rather told to us, which to me defeats the point of a game as a visual medium. For example, at one point, there’s a big fight going on in the middle of a protest, and all we see is a background environment with two character images in front of it that don’t even change at all for the whole duration of the scene, and the rest of it is told through text. I think at least having a few changes to the character images to simulate a combat situation would’ve gone a long way to create some immersion in that scene.

To conclude, ‘Hypoxia’ is a decent 3 or so hour long visual novel, especially considering it’s free to play. It is the first part, so don’t expect all of the story to be resolved, but it takes us to a very interesting post-apocalyptic sci-fi setting, so it will be worth to see where the story goes from here. The gameplay here only involves occasional story choices, some of which lead to early bad endings. The way some of those choices lead to bad endings can be frustrating as the events seem a bit out of the blue and illogical at times. In general, I’d say there are better visual novels out there, but since this one is free to play and is short, it might be worth checking out when you’re in between larger games, especially if you like sci-fi and are a fan of visual novels.