An Early Access, old school cyberpunk GTA plagued by a plethora of glitches and bugs, but with a promise still shining through.

The game punked me immediately upon starting it by skyrocketing my fps to 482 in the main menu, effectively stun locking my GPU at 100% and 75°C in seconds. And my PC isn’t exactly a potato that needs frying, running an RTX2070, i7-7700K and 32GB of RAM, with an SSD to boot. Without capping the fps, it climbs to about 90 in-game on High settings, making the game stuttery and giving me a hot GPU turbine background noise. I haven’t tested it on Ultra settings. After capping the fps to 60 in the Nvidia panel, the game behaves like it should, mostly. There’s still some stuttering and weird lagging, but it becomes playable, for a bit at least. Unless you need to reduce your post-processing to medium, which completely changes the in-game lighting making everything pitch black. Checking the Known Issues topic in the discussions unveils more than a few bugs and glitches, from the mentioned post-processing problem to declining performance and heavily sparkling textures. I’ve had one complete freeze, where even alt+F4 wasn’t reacting and declining performance kept calling me to have a beer with her. It was most noticeable when the wanted level increased to 4 or 5 and there were ton of things on screen, but happened during longer play sessions as well.

Apparently, there was even a hidden DRM when the game came out, causing even more issues for anyone trying to play. Some punches between devs and players appear to also have been thrown, bans were slapped, names were called, you get the drift. The offending party has been removed with the second patch, but take a look at some of the Steam reviews from August and you’ll get the gist of it. Saying “The game is not yet optimized for best performance” on multiple instances and having serious technical issues has no place in Early Access. And the hidden DRM is an awfully charming move by the developers, or publishers, even if it was removed. This is one of those games that personifies the joys and wonders of an Early Access getting out of bed way too early, slipping on a banana peel and face planting in a pile of dirty laundry.

Looking through the Glitches

You’re still here after reading all of the above? You’re special then, just like your character in-game, an android newcomer to the city of New Baltia which is the only unlocked area for now. As a glitch in the system, you’re able to go against your programming, making you a valuable bounty hunter and errand boy/girl to the crazy cultists and gangs populating the city. In a nutshell, this is old school Grand Theft Auto in a cyberpunk setting, when GTA was all about carnage and mayhem from a top down perspective. Along with fluffy vibes of nostalgia comes the infuriating difficulty, tediousness and a steep learning curve of 20 year old mechanics. Or just a training regime for your patience. 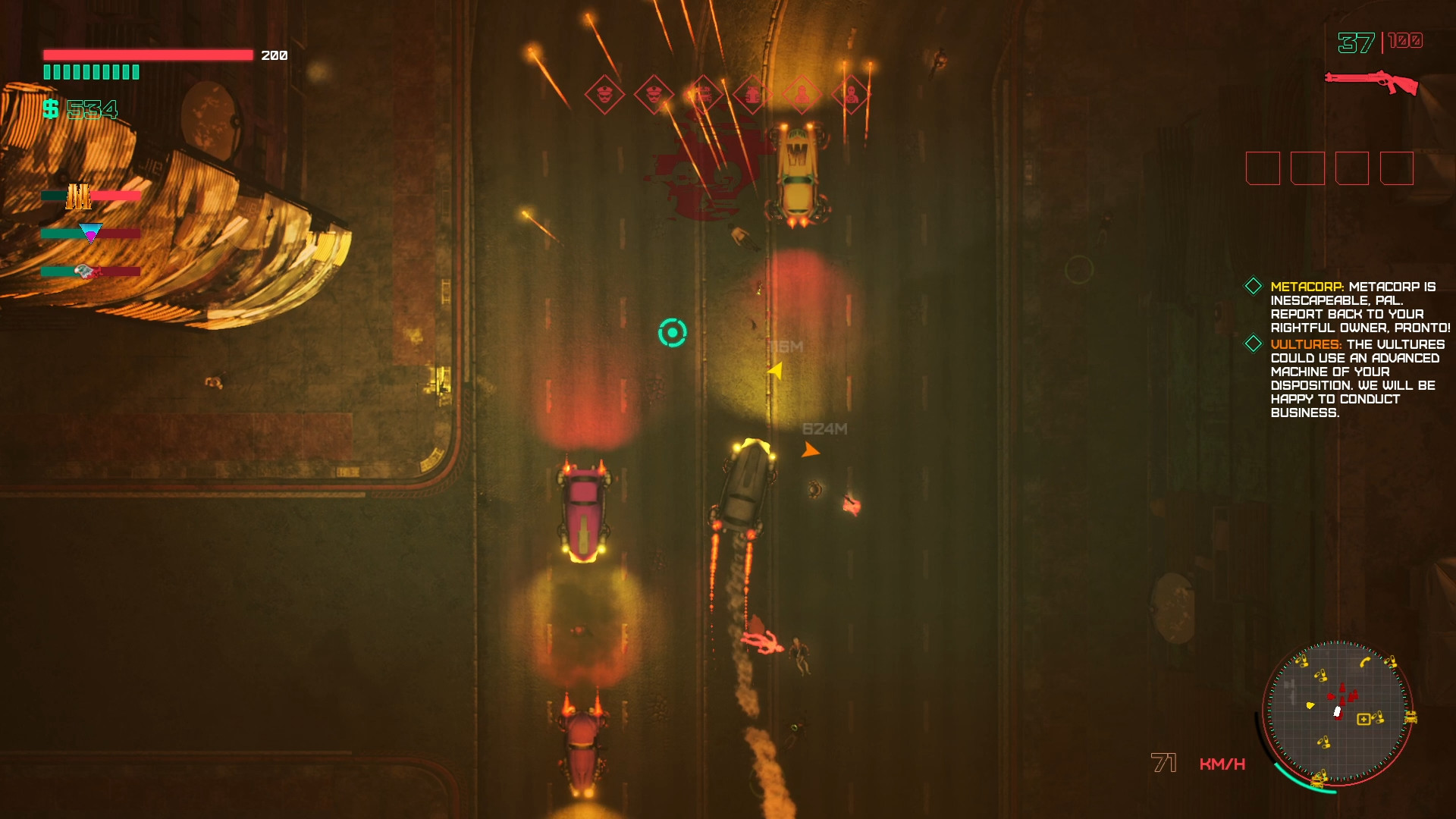 Prepare for absolutely no checkpoints during missions, timed missions that can fail if even the slightest fart occurs where you don’t want it, cheap and easy deaths from falling off the map, getting run over by your own car you just exited, murderous Robocop police that triggers for even the slightest infraction and are almost impossible to shake off, and a ton of weird, glitchy deaths that you have to witness for yourself. To name just a few, it’s easy to get glued to scenery and other cars while driving, which stops you dead in your tracks, allowing the cops to just pull you out of your car and stomp you, angry civilians can punch you and knock you down, which tends to end with you getting immediately beaten to death with fists and blunt objects because you can’t move, and my favorite, you can get lawnmowered by a spinning vehicle out of nowhere. Oh, and you can bet you’re going to lose everything you had when you die and will have to restart the entire mission from scratch. On the plus side, you can restart your mission immediately after dying. But, if you go the Falling Down route outside of a mission, only with more blood and guts, and die, you’ll lose everything, including the cash, potentially getting yourself poorer than a church mouse.

While GTA was pretty barebones when it came to any kind of progression, Glitchpunk puts a few spins on your character. Aside from the aesthetic choice of male/female, it features modules that can be acquired from missions, found, or purchased from shops. The first one you get allows you to hack people using your focus, driving them into a frenzy for a limited time. Other modules increase a variety of stats, give you health and focus regen or grant you new abilities. It’s a nice, tiny RPG injection into an otherwise chaotic and frantic action playground of a down and dirty cyberpunk city. Bounty kiosks can also be found placed around the city, granting cash rewards for killing a certain number of NPC’s with a specific weapon in a set amount of time, and these can be really tough. There’s also garages where you can repair your car and lose the cops, and some special ones where you can turn your car into a car bomb. Or your immediate death if you scratch something a little harder. 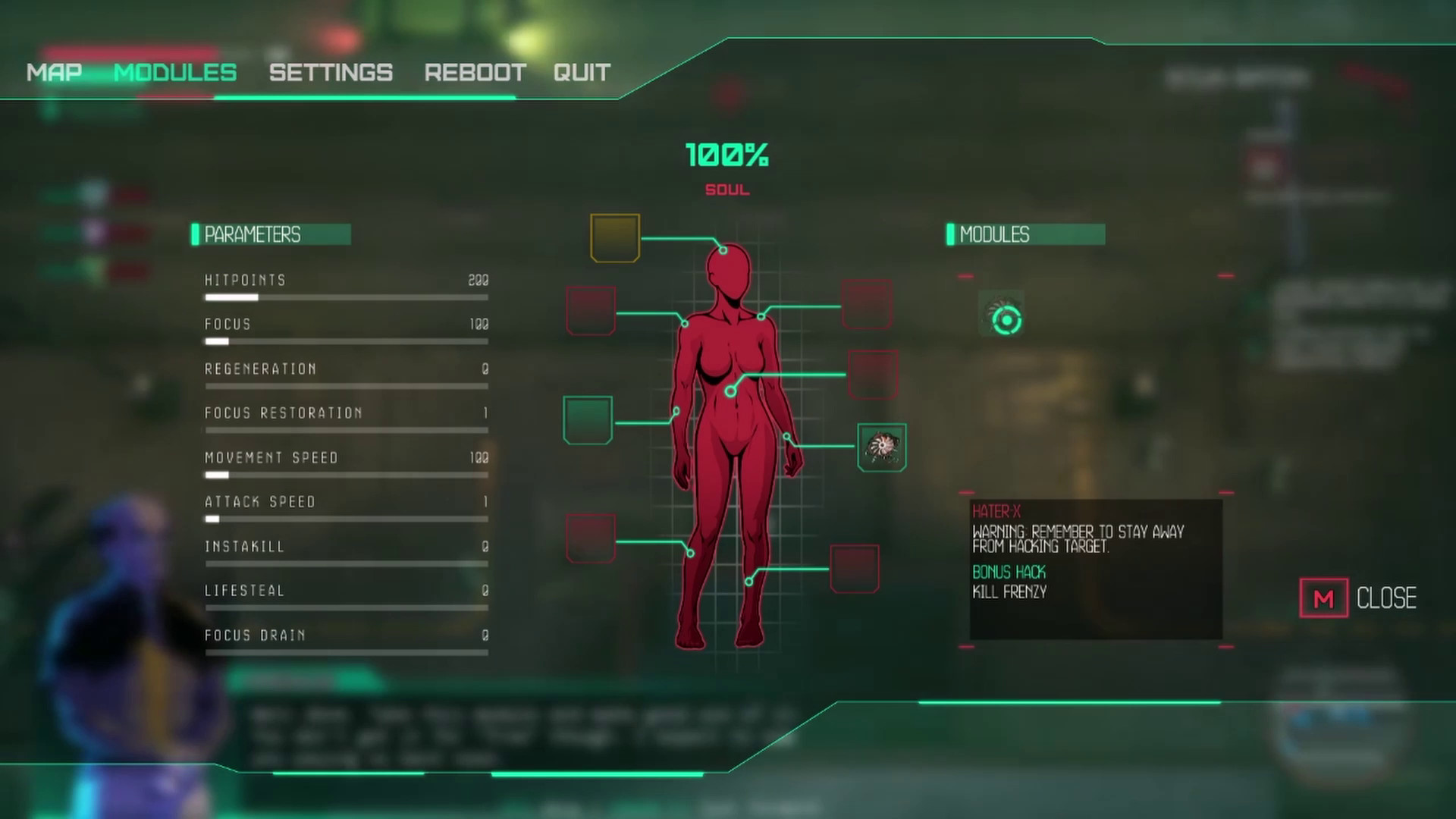 When the game isn’t acting up, the action is wholly satisfying, explosive, fast paced and crazy as it’s supposed to be. Played from a top down perspective, aiming, shooting and movement is on point, driving a little less since the cars feel a bit floaty and unmanageable, even for hover cars. There are several weapons available, as well as health kits and a few consumables, tons of cars that can be liberated from their owners and three gangs in New Baltia to win or lose favors with. Going through the missions, you’ll eventually end up picking a side, and getting to one of the endings. You can restart the game after that and you get to keep all your cash and upgrades. Only the story gets restarted so you can chase a different ending, the chapter progress, or city if you like, stays with you. 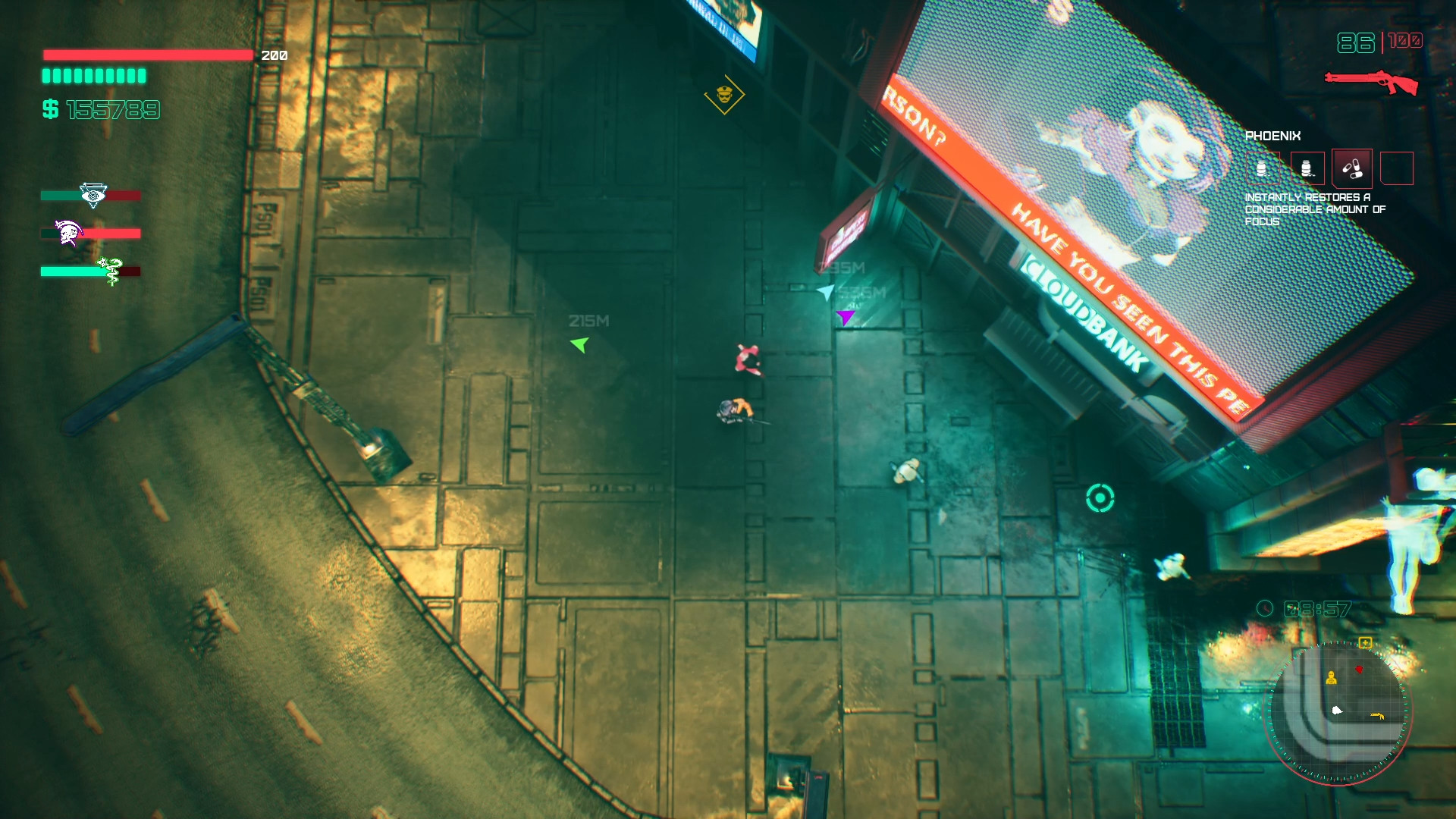 The overall ambience and feel of the city is trademark cyberpunk done well, dark, gritty and neon infused. One slight nitpick with the 3D environment is that it can sometimes get confusing navigating it, especially when changing elevation, which can get borderline aggravating on some missions when you don’t know where to go and the doomsday mission clock is ticking away in large, bright red letters on your screen. The story touches on many cyberpunk tropes, including transhumanism, technophobia, religion and relationship between man and machine. Depending on which side you pick, you’ll get their version of the story, which is fair and complements the game, served to you through exposition during and after missions. It’s a shame that it’s awkwardly placed and easily missable with all the chaos around you when you should be paying attention to it. Additional world building is done through a couple of in-game radios and a news ticker appearing sporadically, which are all in the vein of old GTA absurdity. From the overzealous Radio Messiah to the creepy Informed Citizen Line, they’re all worth a listen.

There’s a good amount of promise on display here, for old souls that remember GTA and new ones that are looking for a punishing action experience. It’s smooth when it works, and addicting, even with all the cheap deaths and ancient mechanics. The city feels sufficiently alive, with gangs roaming around, random acts of violence and muggery happening in broad daylight, police sirens blaring and the overall craziness rounding everything out nicely. But, some serious technical issues that definitely shouldn’t be a part of any Early Access and glitches are holding it back from a recommendation in its current state. Hopefully, the direction it goes into is more punks, guns and grenades instead of glitches, bugs and DRMs.