Post-apocalyptic setting, cyberpunk themes, Lovecraftian beings, and lots of flesh and meat – all come together in this fun RPG.

‘Death Trash’ is an early access action RPG with events taking place in a peculiar post-apocalyptic setting full of strange beings, with gameplay that allows multiple approaches to challenges, and all done in a beautiful pixel art visual style.

We play as a seemingly ordinary person called Mildred who has been kicked out of an underground shelter due to having some kind of strange medical condition. Once on the surface, Mildred has to find not only ways to survive but also his/her purpose. The surface world is quite unusual as we are on another planet altogether, and as we gradually begin to discover, it has large otherworldly beings in it, called the titans, as well as lots and lots of flesh that generates meat, which people eat raw in order to survive. 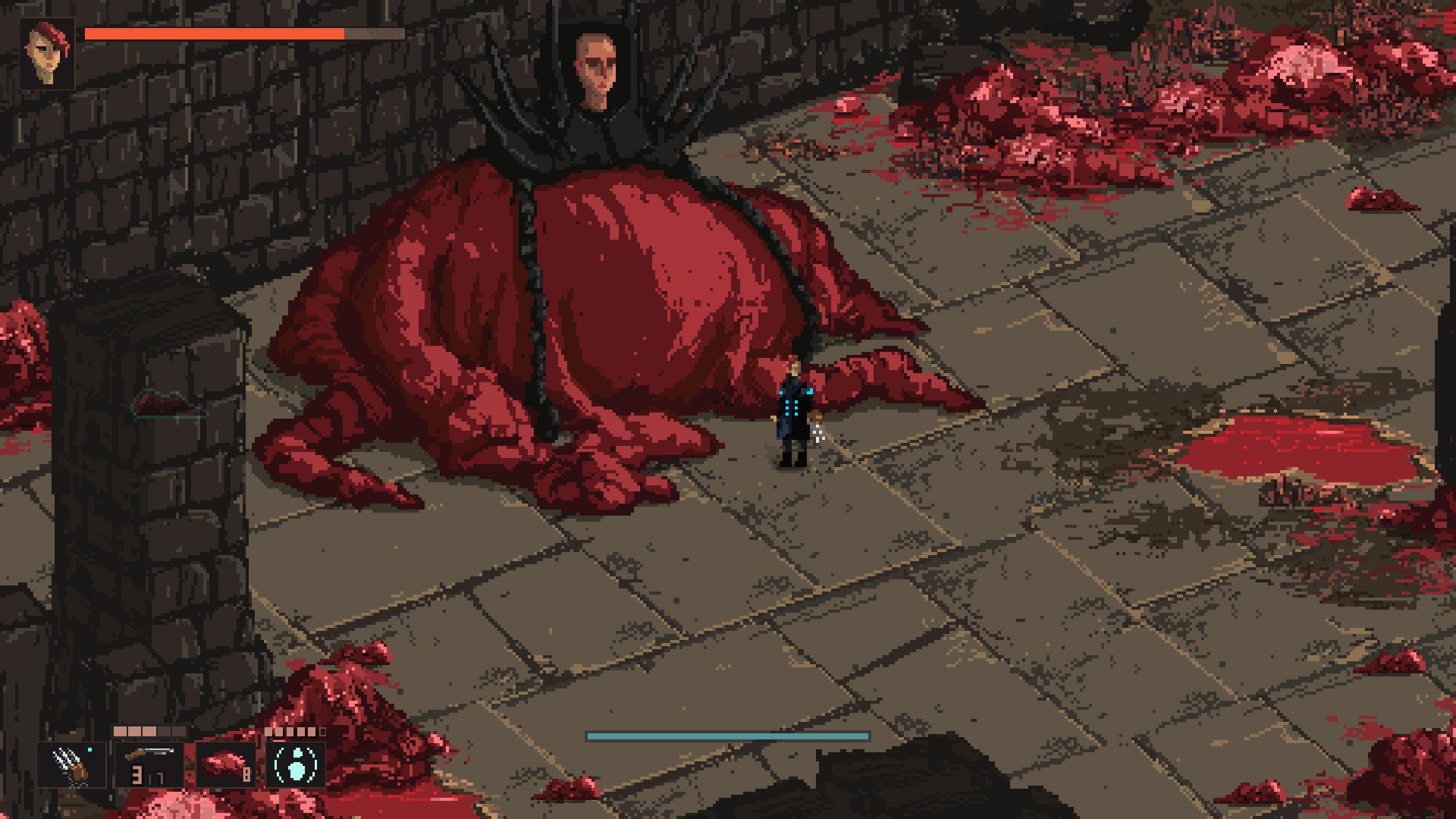 As is common in post-apocalyptic worlds, we come across various patches of settlements with survivors and factions, some of which are hostile. The world, by the looks of it, is very well-crafted, and I get the impression that in the early access content we’ve not seen everything yet and that there will be more impressive things to come.

The overall theme is quite interesting and doesn’t hold back any punches. There is gore, lots and lots of it, otherworldly beings, mutants, hostile creatures, sentient machines (some of which are friendlies while others are hostile), and things such as cyberworlds and transhumanism. There are elements from many sci-fi concepts and settings here, whether it’s post-apocalyptic, cyberpunk, Lovecraftian horror, or something downright weird. 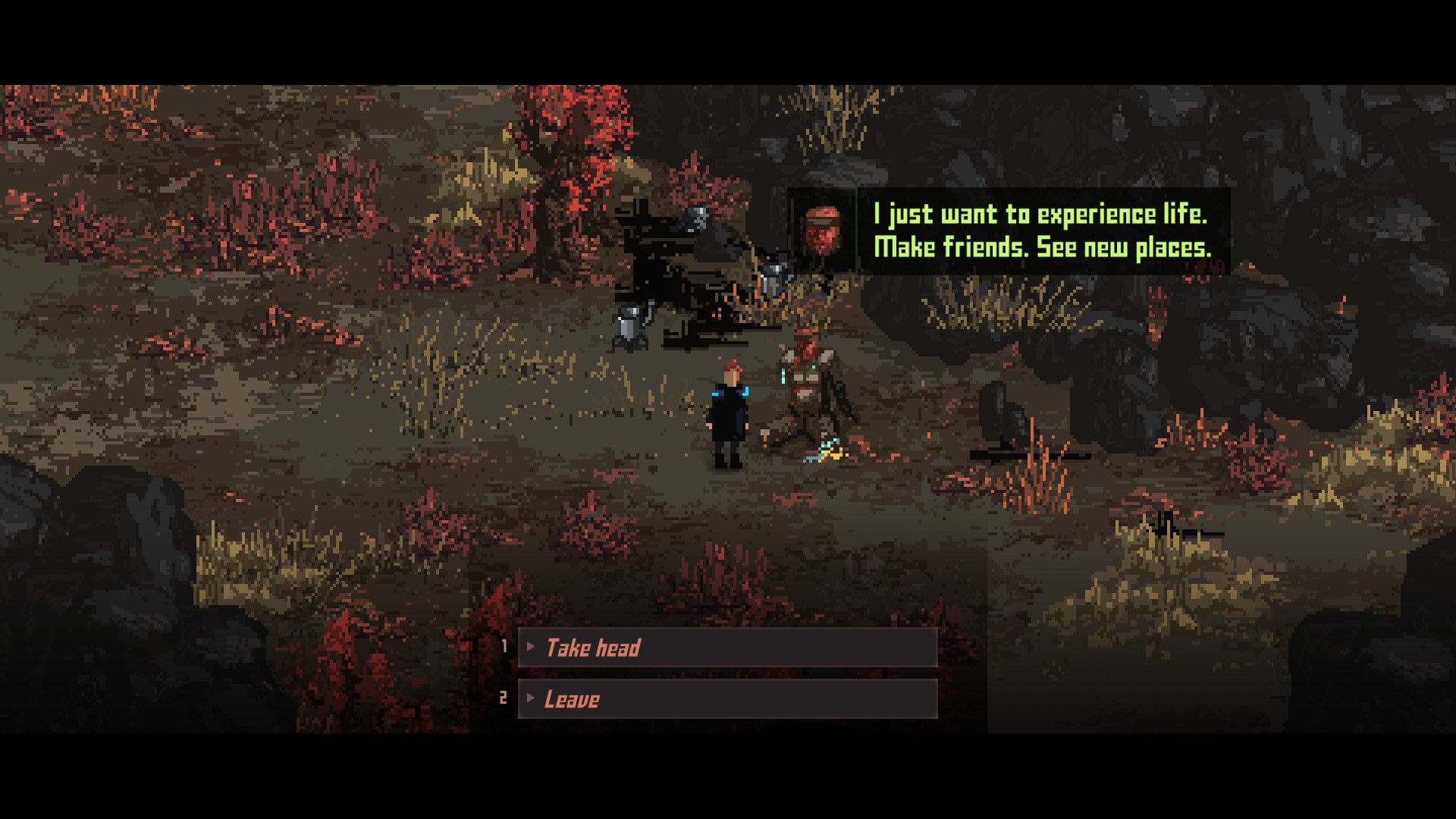 The levelling up is quite standard, in that we gain experience points when we defeat enemies and complete quests. Once we’ve levelled up, we can spend 1 attribute point on one of the major attributes and 2 skill points on the more specific attributes.

As is common in many other RPGs, we get to find plenty of loot in ‘Death Trash’. Some of it are weapons, armour, implants, and consumables, but there are also many ingredients for crafting that we can find, ranging from useful herbs, to body parts, to literally random trash that we can find almost anywhere (perhaps this somehow influenced the game’s name too). Of course there is an inventory system, which has limited space, so you can’t just hoard everything. Gladly, the crafting ingredients occupy their own unique spaces, so they don’t take up the spaces you need for the more everyday stuff such as weaponry, meat, and booze. Meat and various organs are our main healing items in the game, so virtually everyone in this game’s world is a meat-eater. 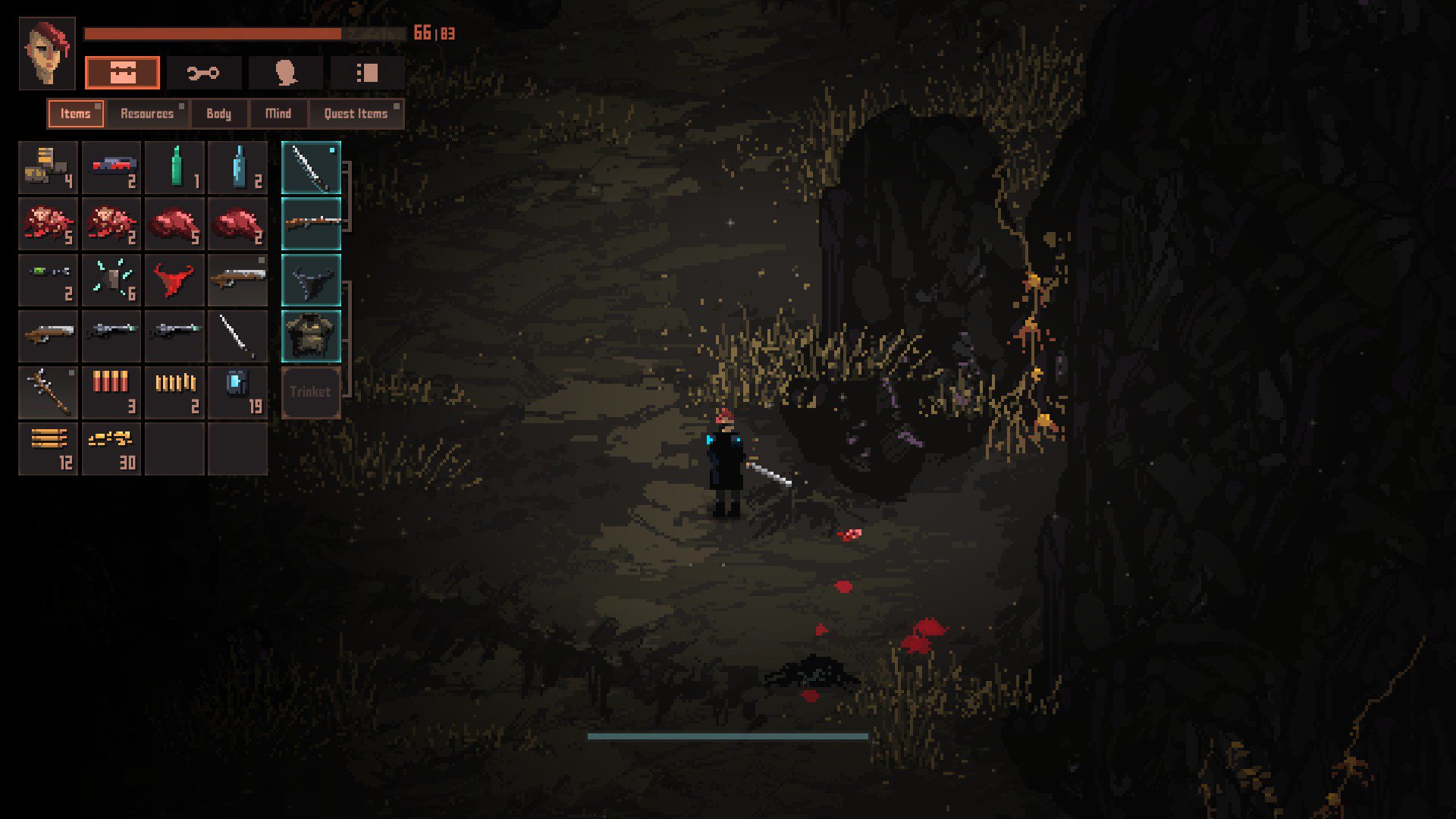 The combat is one of the aspects of gameplay that we do very frequently as the world out there is nasty and hostile and full of dangers, whether it’s from animals, machines, or even fellow humans who just want to mug you and take the scrap off your corpse. The game offers many ways for us to fight against the dangers that we face. There are melee weapons – blunts and sharps, as well as different types of guns – pistols, rifles, shotguns, rapid fire weapons, flamethrowers, energy guns, and rocket launchers. There are also grenades and other throwable objects too. By the looks of it, maybe we’ll even see some weird alien weapons in further content updates too.

The combat is generally quite fast-paced, but despite that, it manages to be very strategic and allows ample opportunities for planning. When we see enemy groups on the map, we can decide how to tackle them, whether to sneak up on them or to go in guns blazing, or maybe to find a way to outflank them and draw them out a few at a time. We can even lure them onto landmines that can be found in some locations, which is always fun to try.

And speaking of sneaking up – the game has a stealth system too. We get a cloaking device at the start, which we can use for stealth purposes. This cloaking device has limitations, however. It uses up energy when we move, so at times we have to stop and stand still for a few seconds for energy to recharge. It also doesn’t make us completely invisible. Rather it allows us to stay in the enemy’s line of sight for a little bit, but if we stay in it for too long, they’ll eventually see through our disguise and attack us. Of course, this can be improved with the stealth stat. And when in stealth mode, we can clearly see enemies’ cones of vision. 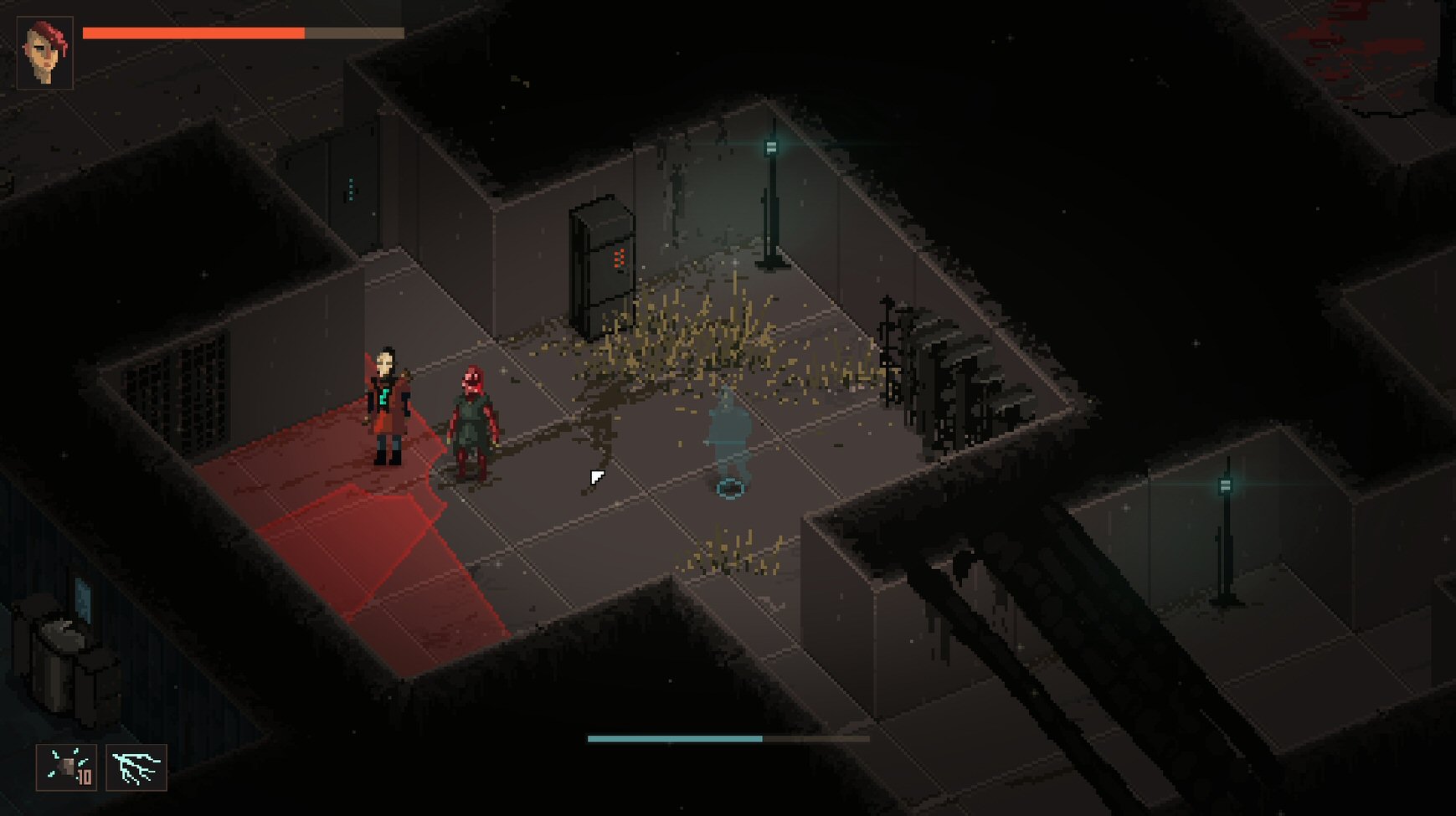 There are also tech implants that we can get, either by finding them or buying from tech vending machines. The implants are quite diverse and offer additional abilities that we can use in combat, such as freezing enemies, zapping them with electricity, or summoning creatures even. Although we can equip multiple implants, we can only have one of them active at a time (which is used when we press the ‘special ability’ button). Kind of like with weapons – we can carry multiple guns, but only have one actively used at a time, though we can switch between melee and ranged at any time. Consumable items can also be used one at a time. The game has a nifty quick-action menu which allows us to quickly swap between equipped weapons, items, and implants, making the flow of the game quite smooth.

I’ve found the game’s difficulty to be perfect. It’s not too easy and not too hard, although some people will disagree no doubt. The difficulty itself can go up and down during the playthrough. When we start out, we don’t have many ways to fight back and so have to take extra care when faced with more than one enemy at a time. But as we level up and improve, we can go for bigger groups of enemies. By the end of the early access content, I turned into something of a one-man army, taking on a highly secure facility full of guards and turrets by myself, and it felt great. Although even there, some care had to be taken, because all enemies were armed, and it was easy to get swarmed and outgunned. 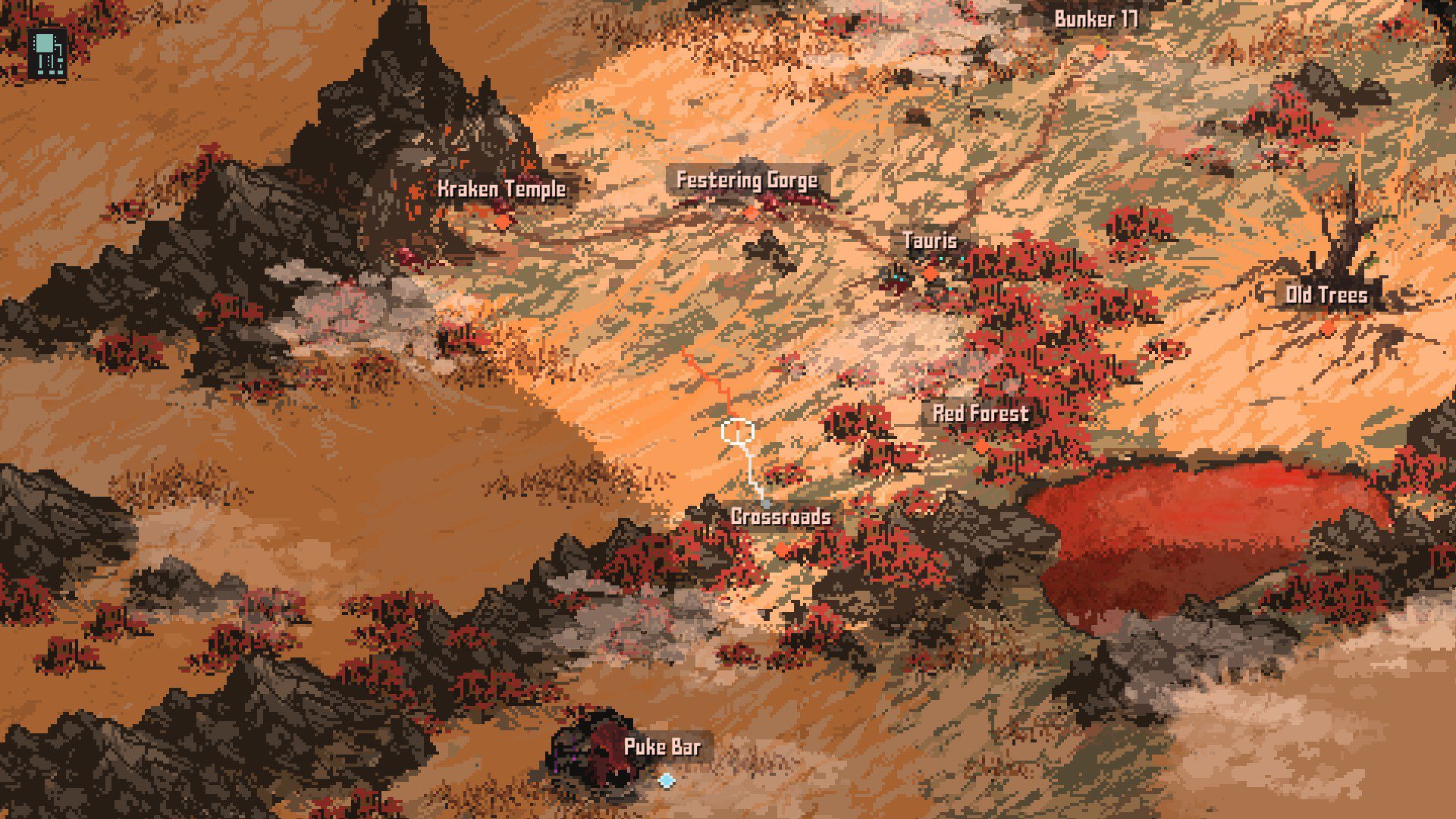 The game has a world map which we explore throughout our journeys. There are some main quests that further the main story, but also plenty of sidequests already in this early access version too (and no doubt there will be more later). We can also simply explore the world map and come across random encounters – these are random hostiles that also happen to be travelling. We see them as dots on the map, and if we get close to them, it takes us to a small location where we can engage in combat properly or even simply escape if we think the enemy is too hard.

There is also a local split-screen co-op mode available, allowing a second player with their own character to join on the quest.

‘Death Trash’ is done in a really stunning-looking pixel art style. As a huge fan of pixel art and as a pixel artist myself, I personally could really appreciate how the game world came to life in this style. 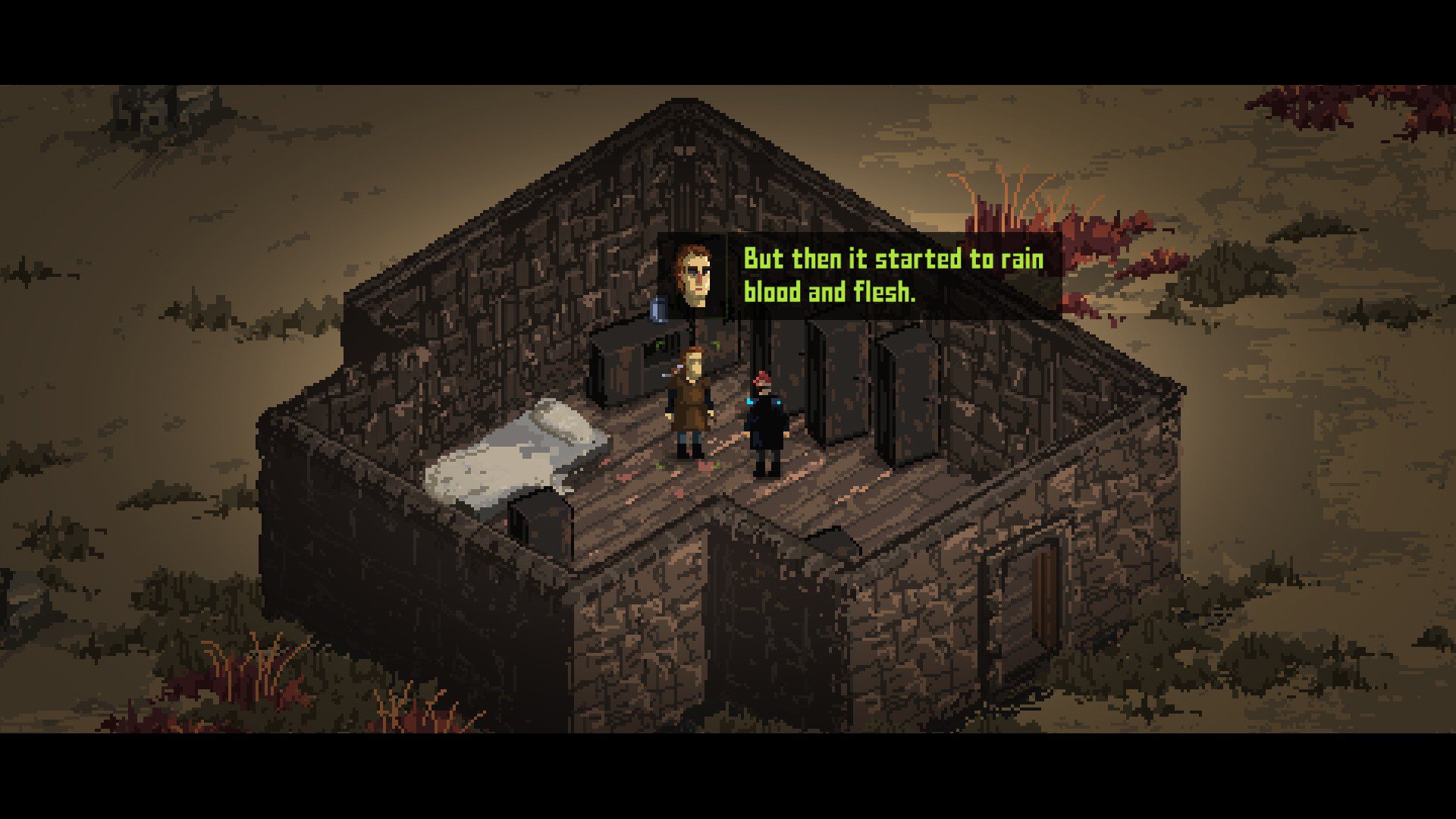 The menus and icons are all decent and easy to use. There’s a quick-access menu as well that allows us to quickly swap between existing weapons, items, and implants in our inventory, as mentioned previously.

The music is for the most part ambient and in the background. A lot more focus here is on sounds in our environment. This creates a strong bit of immersion and makes us listen in to the sounds when exploring the areas. The sound effects overall are top notch. The menu clicks when equipping something, the sounds of looting and taking everything that’s not nailed down, the crunching of meat that we greedily consume, the smacking and slicing as we turn enemies into a pulp, all the sounds are perfect.

The font and colour of the text is well-presented too when engaging in dialogue with NPCs. The dialogue in general is quite simple and to the point and sometimes can even be downright funny. The comedic moments are not overdone and instead are sprinkled in just the right moments. 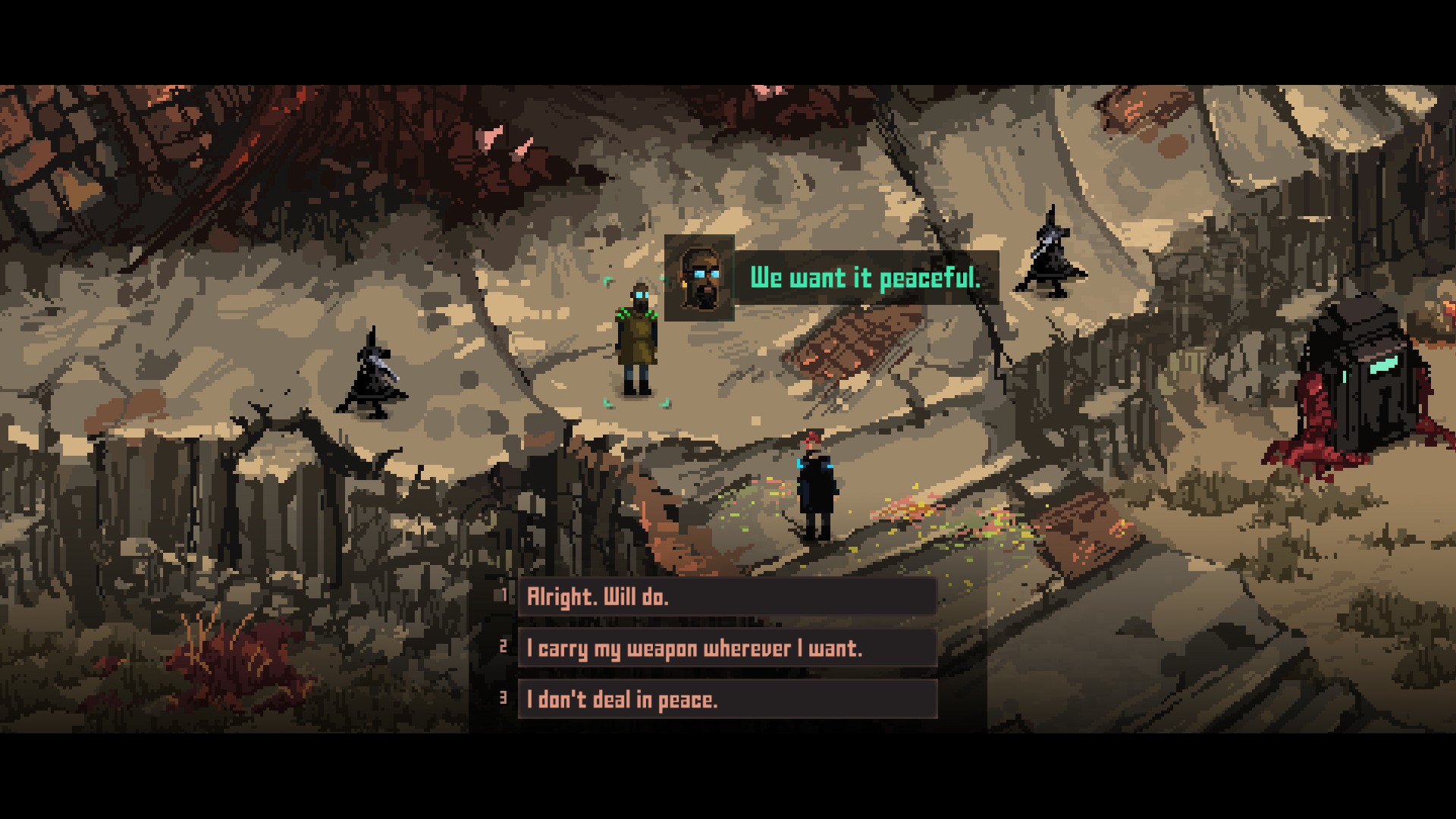 I got immersed and impressed by the game from the first few minutes, which happens rarely. Despite being in early access, it already delivers a lot more fun and engagement than even many complete games. Its core mechanics and feel are already in place and so far it took me about 7.5 hours to do all the early content stuff, including sidequests. According to the dev, the full game is planned to be at least 20 hours in length and is planned for release in 2022.

‘Death Trash’ is a really well-put together game, with deep enough RPG elements, satisfying combat, fun exploration, intriguing setting, and stunning-looking pixel art visual style. There’s not much I can criticise about it, aside maybe that a few locations could feel a tad grindy as they can have too many enemies and not much else and might not feel rewarding-enough to explore. But this is a minor gripe and will likely be improved on over the course of development as more content will be added, not only to new parts of the story, but also to the already existing locations. As of the time of writing this review, the game sits comfortably with the ‘Overwhelmingly Positive’ rating on Steam, and I think it’s very much deserved. It’s likely going to be one of the GOTYs for me this year.