PREVIEW: The Hand of Merlin

Pick a team of three heroes who will save the world of quickly-spreading corruption turn-based style. Arthurian Legend meets Lovecraftian horrors.

A roguelike with turn-based combat system with the Arthurian legend story and setting. Corruption in a form of Lovecraftian monsters is spreading through the lands. As a team of chosen by Merlin himself, we have to make our way through locations on the map, meeting allies, making decisions, and engaging in fights in order to locate the source of corruption and put an end to it. 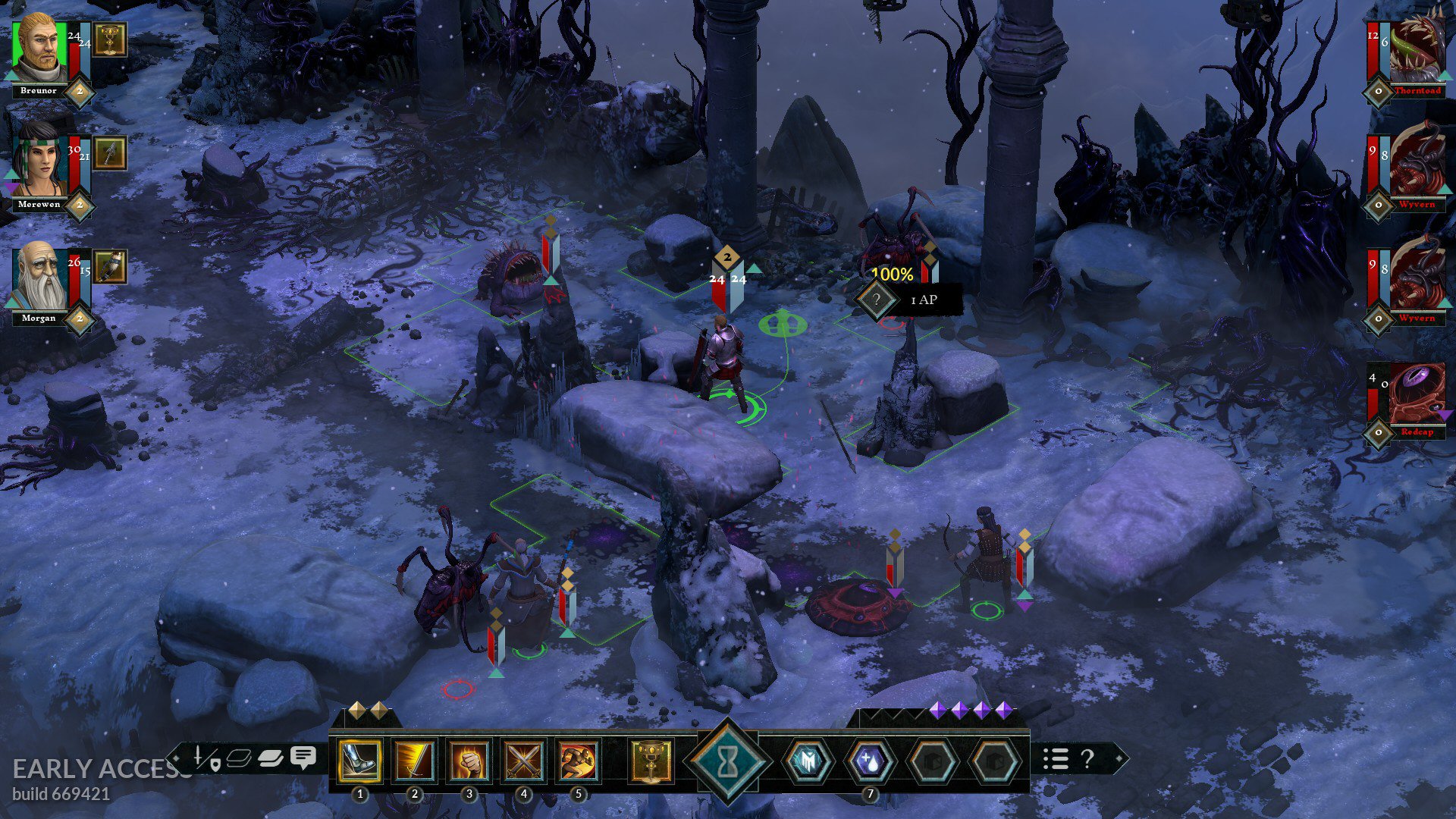 The story and the time the game is set in contains a lot of Arthurian lore. We pick a team of 3 heroes, all of which are chosen by Merlin, a powerful wizard. Merlin himself is not present, but his spirit enacts its will through us. The land is falling into dark times and corruption is taking on physical manifestations – dark tendrils growing through locations and twisted creatures roaming about and attacking people and animals alike. Our team of chosen heroes must succeed and stop this corruption.

Gameplay on the Map

We begin by choosing 3 pre-existing heroes for our party. Initially only 3 are unlocked, but by accomplishing certain feats, we can unlock 6 others. They come in 3 main classes: warrior, ranger, and mystic. Warriors are tanky and can only fight upclose in melee range. Rangers use bows and other tools for longer-ranged combat and are less tanky than warriors. Mystics use magic spells of various kinds, whether offensive or supportive, and are the squishiest of the lot. We can mix and match our party to have whatever class combination we want. We can even have all 3 warriors if we want (so long as we’ve unlocked them).

The whole story is separated into different lands. On each map there are many nodes, representing different locations. We choose which node to go to and have some choice over how we progress through the map, but we do have to keep moving forward and cannot backtrack to any missed nodes. At each node, some event happens, depending on the type of the node and if it’s been taken over by corruption or not. Sometimes we merely meet someone on the road, other types we come across a situation and need to make choices, and in some nodes we’ll have combat. 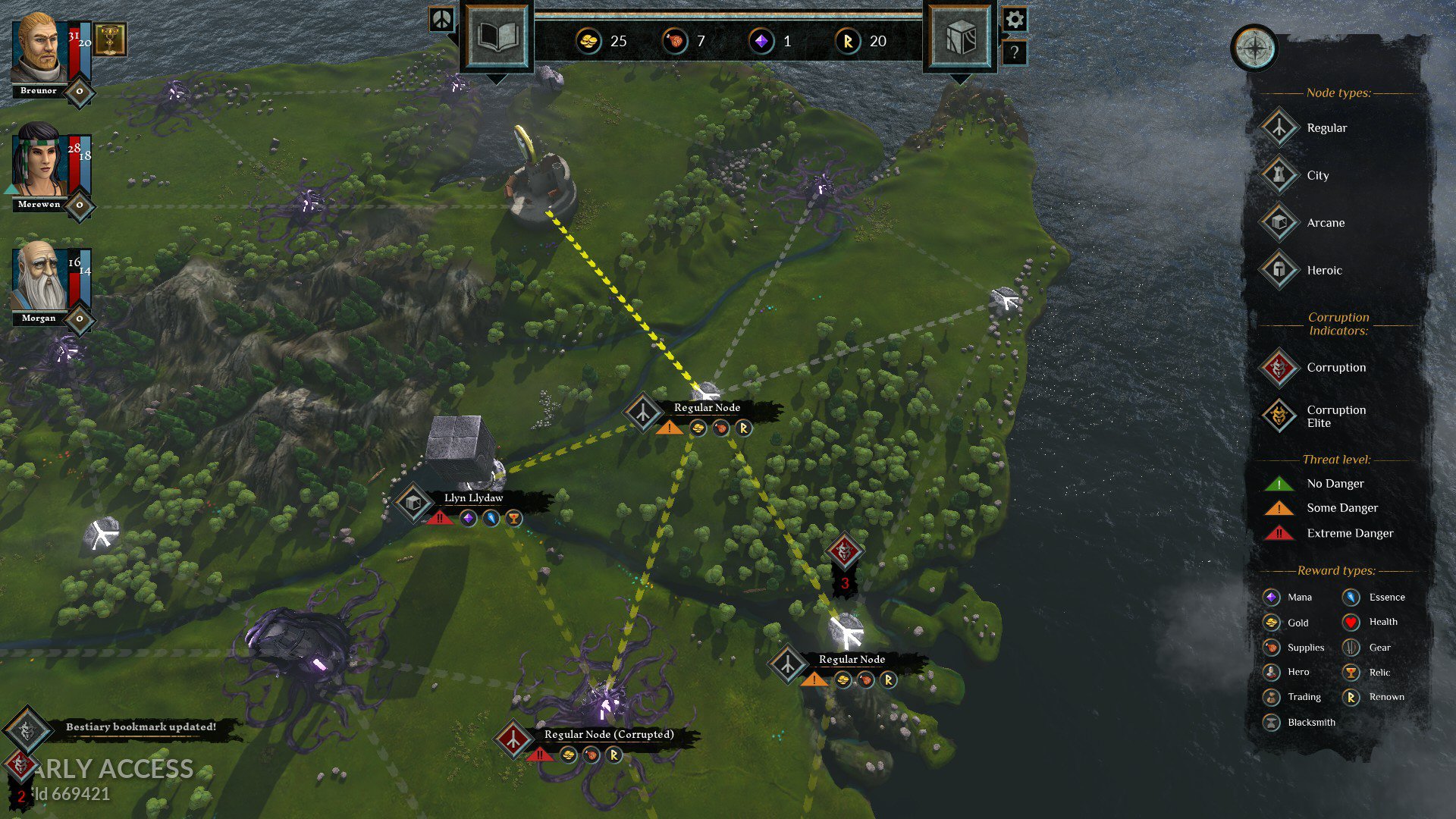 There are city nodes too. The cities are safe places where we can heal, rest up, and upgrade our gear. Upgrading of the equipment is simple yet interesting. Each hero in our party can upgrade their weapon and their armour, and whenever we upgrade, we get a choice of two bonuses, which are random by the looks of it. All the upgrades require us to use money which we earn or find during the quest. 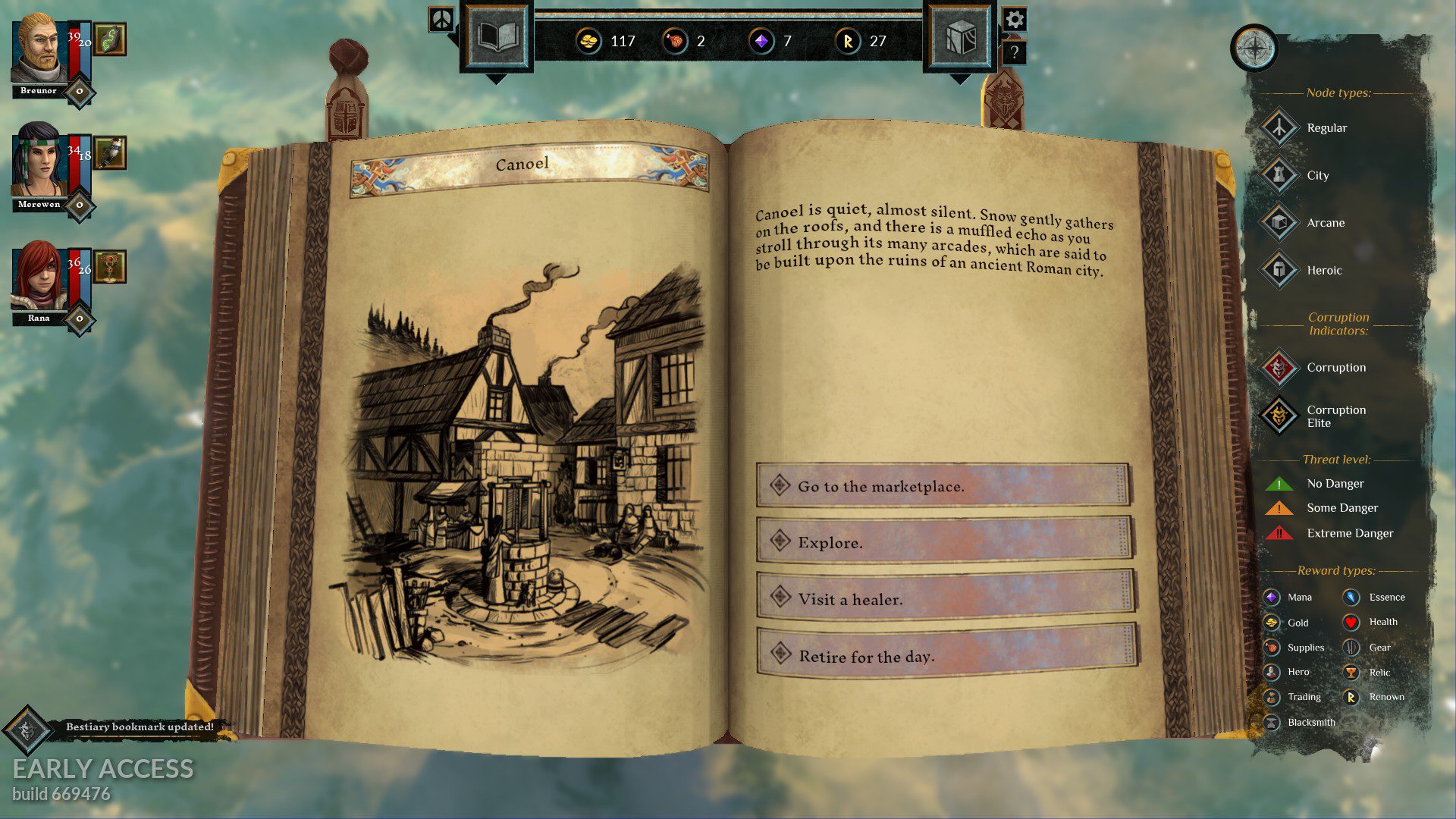 There are a couple of other resources we need to watch out for besides money. One of them is food. Food is required for travels between the nodes. Each time we move from one node to another, we use up one unit of food. If we have no food when travelling, the heroes lose 1 point of health, so it’s good to have food supplies stocked up.

Another resource is the reputation. Whenever we do noble, heroic, or generally kind deeds, we gain rep. Fighting monsters and bandits also gets us rep at the end of the combat. Rep is needed for levelling up. For every 50 points of rep, we can level up the whole party’s skills.

The events we come across at each node usually have us make some kind of decisions, the outcomes of which could be favourable or not. At times we need to decide if we’d rather get money vs rep or money vs food, and so on. Many events also have dice rolls as they have a % chance to succeed if we choose to do them. These rely more on luck, but usually each one doesn’t make or break the game on its own. However, if you play very risky and engage with these events a lot and happen to get unfavourable outcomes all the time, it might possibly ruin a run.

At times during node events a specific party member can influence the options available. This is a pretty nice touch as it spices up the game and could even yield new outcomes whenever you come across the same event again in a future run, because a different hero in your party could unlock a unique option that you can try. 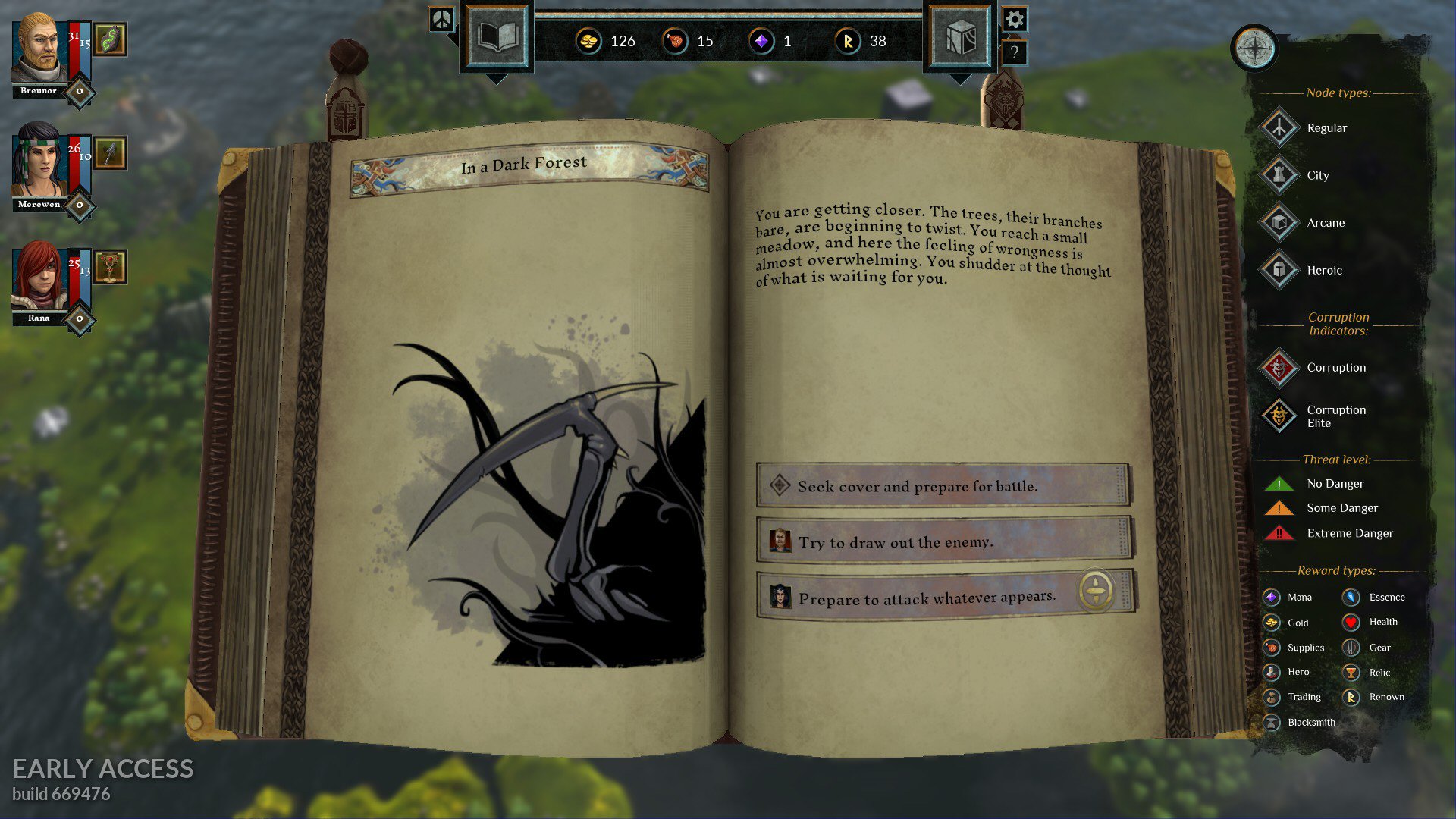 A big aspect of the overall gameplay is the turn-based combat. During many of the node events we engage in fights, whether it’s bandits who try to rob us or the Lovecraftian monstrosities that are spreading corruption and destroying everything in their path.

Combat takes on the isometric form, similar to XCOM-like and other on-grid tactics games. Each character and enemy has health and armour points. Armour points must be destroyed first before health points can be taken away. For our heroes, this is especially important, because armour points fully replenish at the end of each battle, while health points do not. So if we lose health points, unless we find a way to heal up in between, in the next battle we’ll have less than full number of health points. Over time this can lead our characters to get worn down and die. So we often need to try and avoid HP loss, especially that some skills can potentially do more damage to health points than to armour points. 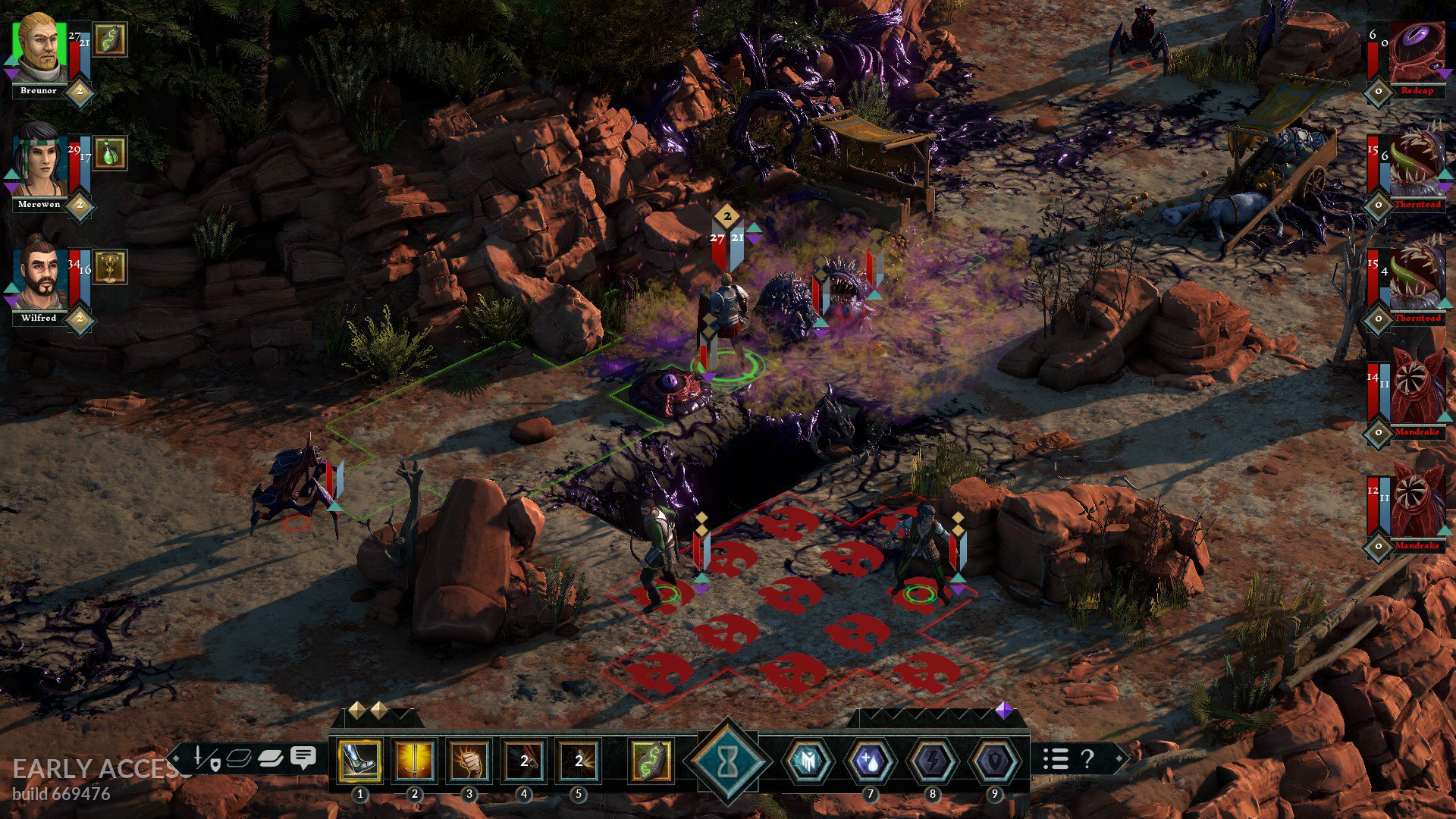 Each character has their own skills they can use and two actions points by default to use each turn. Action points are required for moving around the grid and also for using the skills. Each skill, however, has a cooldown, so cannot be used more than once per turn, and at times a few turns need to pass before that skill becomes available again. Some skills have a limited number of uses per battle too. So we need to be quite strategic and take care when using each skill, to make sure we make the best of them.

Each hero by default starts with two of their personal skills. As we level up though, they can acquire two more skills, which are provided as a choice for us. The skills offered as a choice are taken randomly from a pool of several skills to do with that class. For example, as a warrior character, we could get a choice to acquire a parry skill or maybe we’ll have some other warrior class skill instead of it. This semi-randomness can spice up each run, even if we use the same heroes again, because we could potentially end up with some different skills for the same heroes. This might be offputting to some people though if they have a strong preference to some skills and not others and hope that by luck they get the skills they want.

With further level ups, we get to improve existing skills with bonuses of our choice. 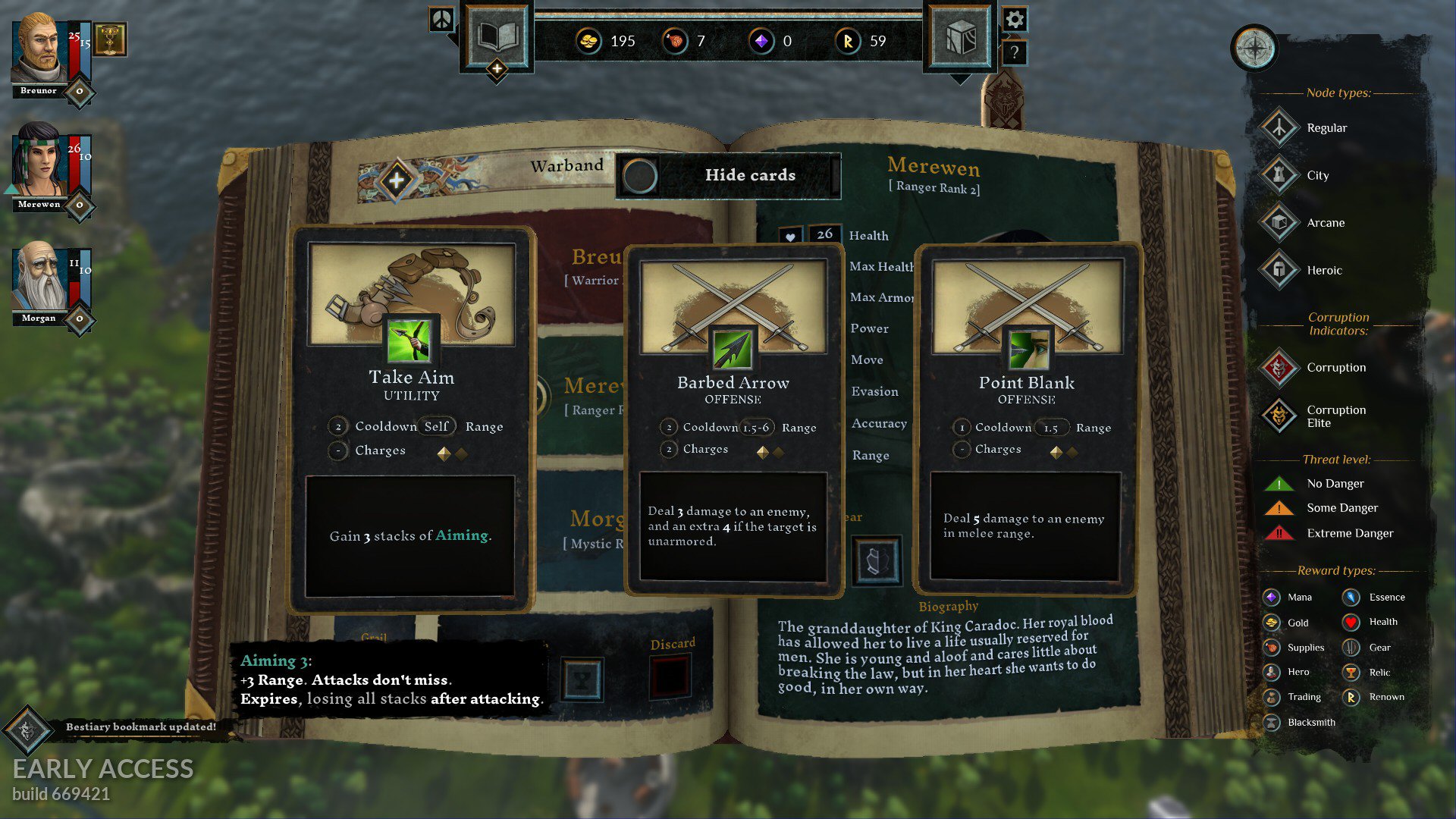 In addition to the heroes, we can also acquire new spells for Merlin’s spirit. The spells are all quite powerful and can be used in battles at the cost of mana points. Mana points are pretty limited and can even be used in some out-of-battle events too, so these spells should be used in particularly dire times and not when dealing with trash mobs.

Each of the heroes can die for good, so in the true spirit of roguelikes, there is perma-death here. Once a hero dies, they’re gone for good for this run and we can only ever use them again if we start a new run. Unfortunately, if we lose a hero, we can’t find another one to take their place, so we need to make the best of each of them and keep them all alive, because once we lose one hero, the others will shortly follow too, because having one less hero in battle means you get quickly outnumbered and overwhelmed by enemy attacks.

Gladly a single run is not overly long and can go for around 3-4 hours, so replaying the game is not a chore, and in fact there is a lot of replay value here because of the randomness in what events happen at each node each time we play a new run and randomness in the battle maps during tactical combat and randomness in the skills we get. Also, as we unlock new heroes, there’s incentive to try the next run with them in the party to see what they have to offer.

The on-map screen is easy to navigate in and the key to what each symbol means is shown on the side of the screen. We also see at all times the status of our heroes and we can access the skills and equipment menu with a press of a button. So the UI and navigation is also pretty top notch. 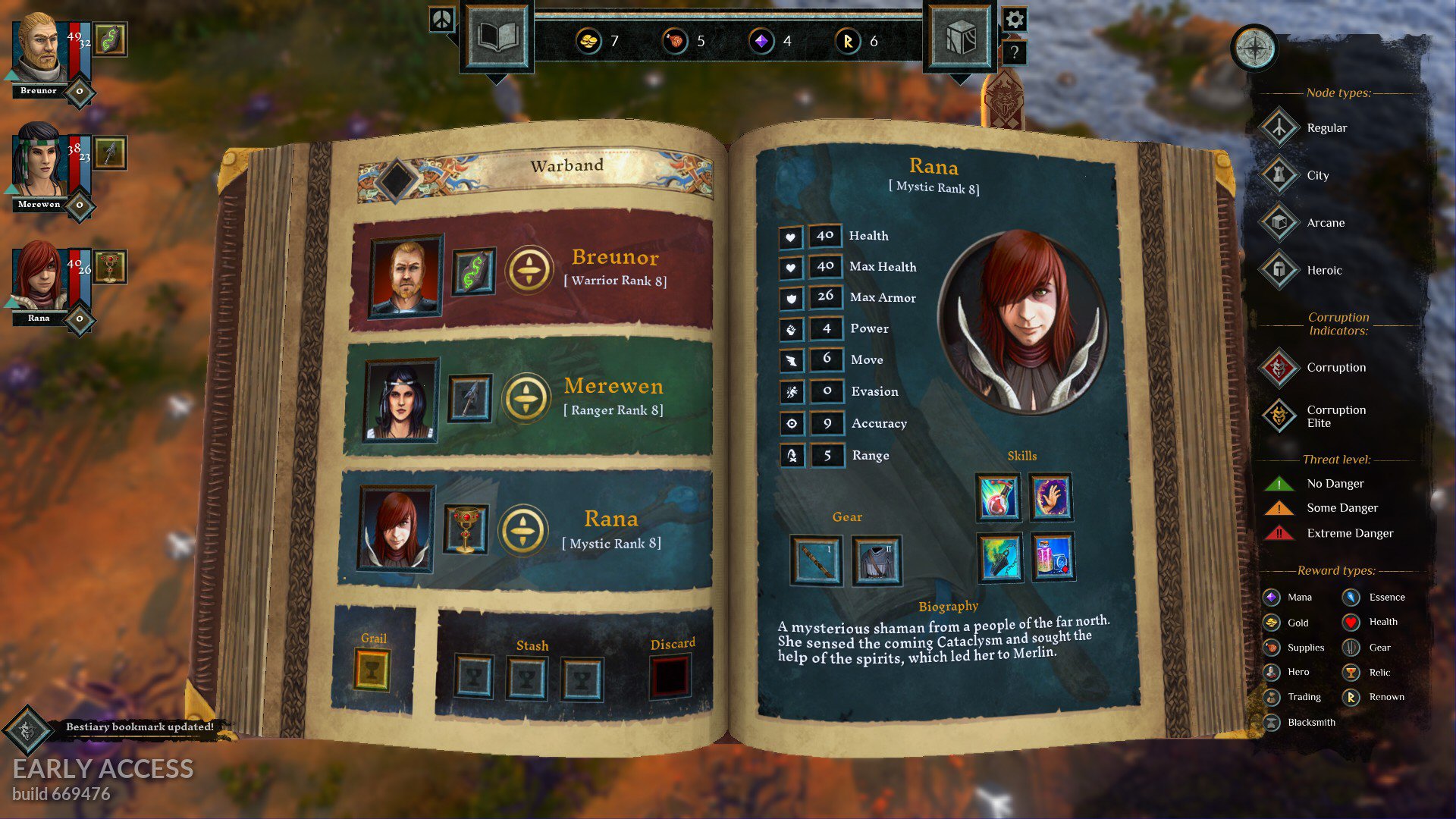 The turn-based combat screen is also great and all-too-familiar for anyone who’s played isometric tactics games before. When we choose to go somewhere, the tiles where we can go are clearly shown, and if we need to attack someone, the range of how far we can attack is also clearly shown. 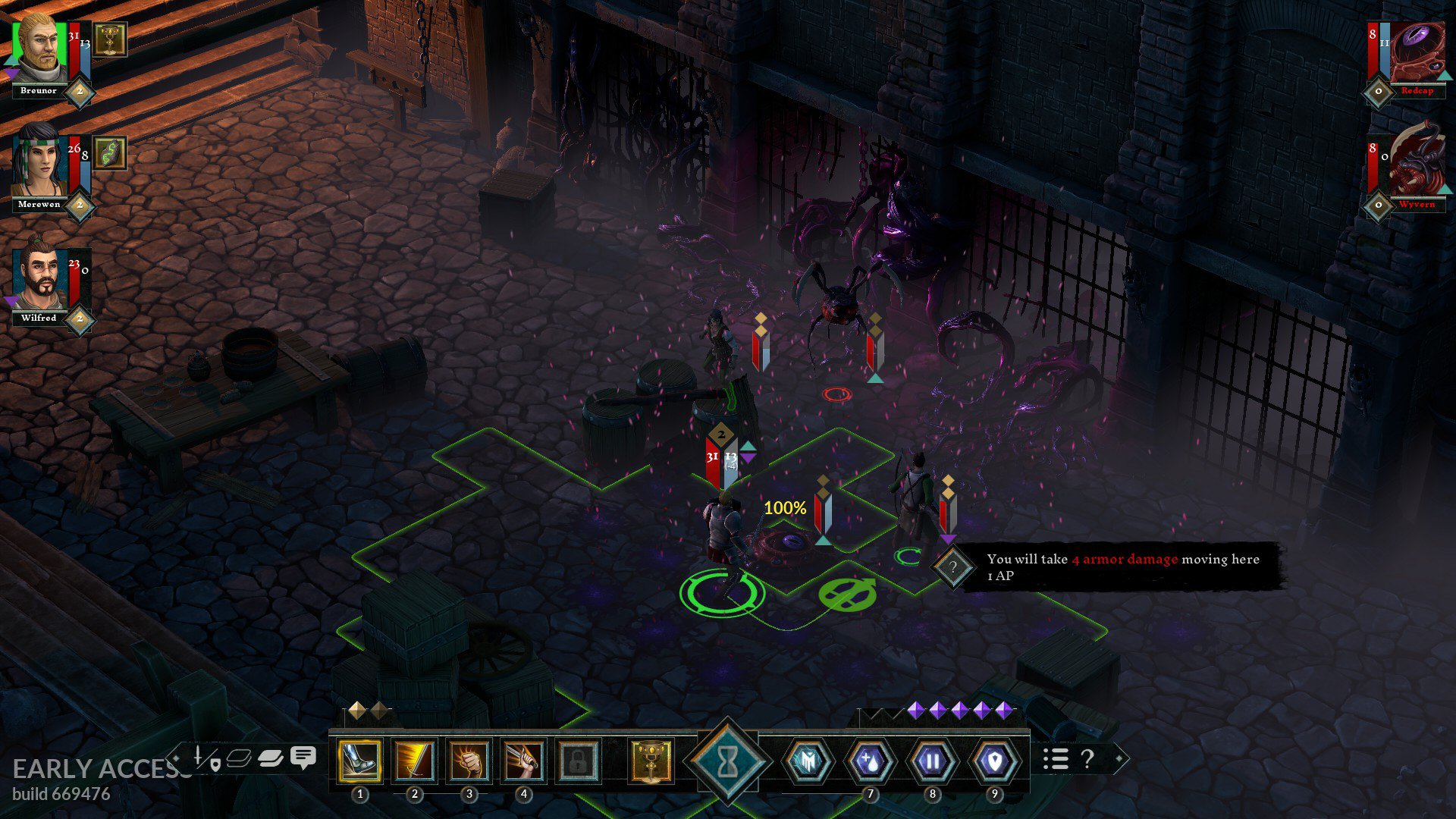 I think there needs to be an easier way to manage mis-clicks, because they do happen at times and can ruin the strategy. This goes for when selecting which tile to go to, which enemy to attack when they’re next to each other, or even simply when trying to select another team member to use and accidentally having the currently selected one walk onto the tile next to them. The game has an undo move option somewhere, but it seems hard to find. I managed to come across it once and never could find it again since. This should be easily visible on the main screen during combat!

The music and sound effects are relatively decent and enhance the overall feel of the game and its setting. Nothing particularly stands out here as either superb or bad. It’s just all-round good.

The story and events are presented as a choose-your-adventure book, which is an interesting and charming style that doesn’t overdo it on the reading part and keeps things happening at a decent pace. 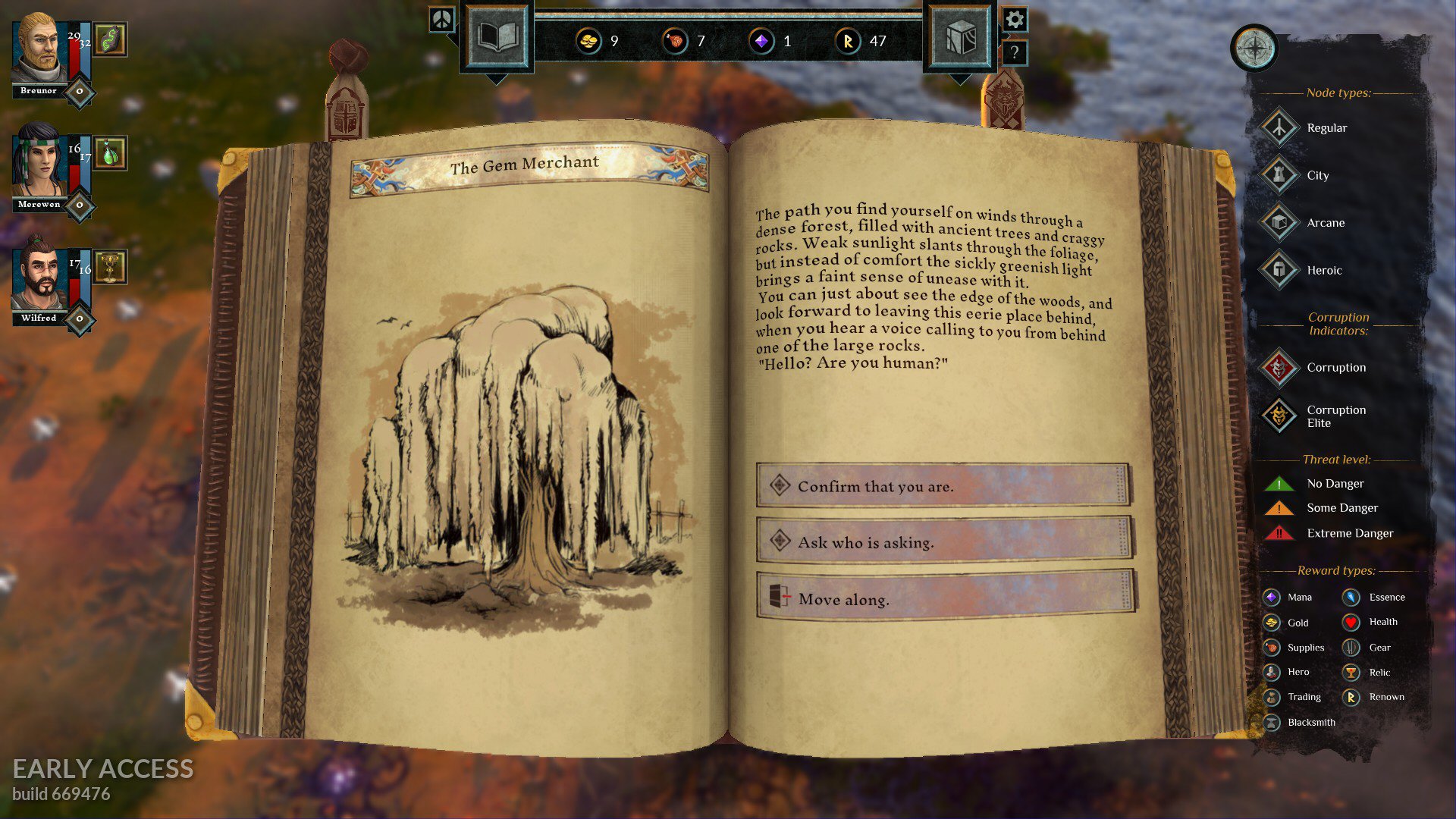 ‘The Hand of Merlin’ is a pretty good tactical roguelike with turn-based combat. It doesn’t feel like an early access game at all as it can be played from start to finish and every feature seems to be implemented and polished. From the way it is now, it’s already worth getting at full price or a small discount. I’ve already done 3 runs through it, losing two of them and winning on the third, and I’ll likely play more as each run is bound to feel somewhat different, especially with a different party of heroes. I suspect some new features will make their way into the game until v1.0 is out, so it should get even better with time and offer some new things to try out.